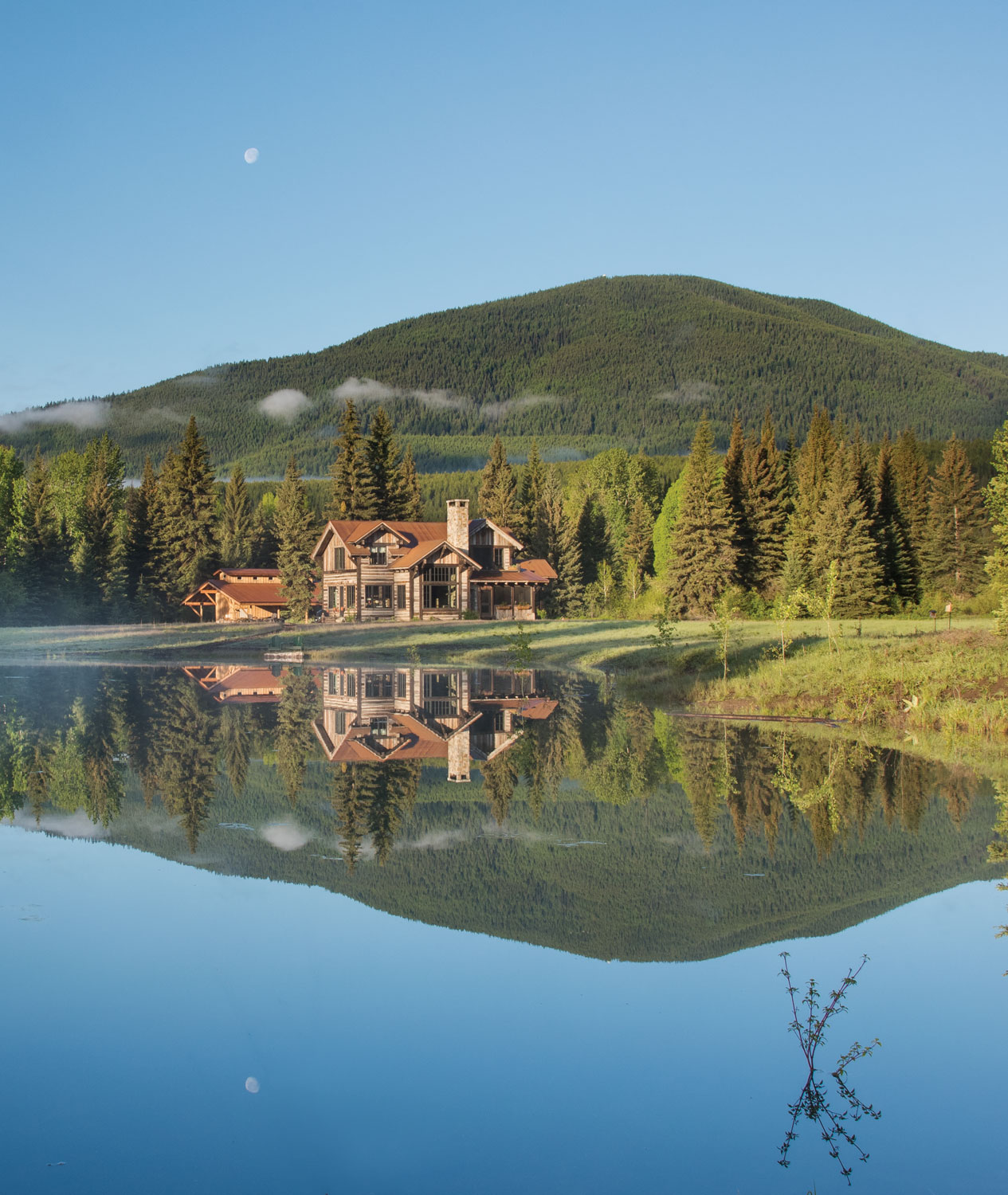 Situated on 80 acres on the edge of Glacier National Park and next to the North Fork of the Flathead River, this timeless home was built to last. Bear Barinowski of Malmquist Construction worked hand-in-hand with the owners to craft the structure out of reclaimed wood and stone. People say it’s a good idea to really get to know a property before you build. But living in a yurt, without power or plumbing, through three winters on the edge of Glacier National Park might be taking that advice to the extreme. For one landowner at the tail end of his career in the Midwest, however, the experience was all about the fishing. With the North Fork of the Flathead River running along the edge of his 80-acre property, and a large spring-fed pond stocked with trout, the passionate fly fisherman and his accommodating girlfriend (now wife), had all they needed. Or so they thought. The compressed cabin- like entry opens up to a vaulted great room with big views across open meadows to the mountains beyond.

The couple fell in love with the lifestyle and also the land: a mostly-level site that is timbered, with meadows and mountain views, edged by the river, and traversed by a game trail. Grizzly bears, elk, moose, and even wolves are common. “‘Paradise’ and ‘heaven’ are words I’d throw into the description,” the husband says. And after traveling to Patagonia every winter for 15 years, the site seemed relatively accessible.

But the yurts were entirely off the grid — no power, no communications — accessed by 30 miles of dirt roads. The couple eventually conceded that, long term, creature comforts such as heat, electricity, and a means for communication held some appeal.

The husband was enthusiastic about the experiential aspect of mountain living. Initially, he recalls, “I wanted to build a cabin with our own trees, with my own hands. But once I researched that and understood what it really meant, we nixed that plan.” In researching log cabins, and in subsequent conversations with the builders at Malmquist Construction, based in Whitefish, Montana, he learned the difference between a true log cabin and one that is traditionally framed and insulated, but has log timbers split in half and applied flat-side down for a true log look. He was soon sold on the latter approach, explaining, “If it’s much more practical and energy efficient for the environment, we’re in.” Despite the log walls, the kitchen is light and airy through the introduction of white cabinets and an island that was stained with huckleberries by local cabinetmaker Stephan Van Ekeren. Large windows dominate the dining area and open up to the views.

Kevin Richardson of Timber Forge Design, also based in Whitefish, was asked to create plans for the home, while Malmquist project manager Andrew “Bear” Barinowski was intimately involved from the start. The approximately 2,500-square-foot, two-story structure, tucked between the pond and the trees at the base of a foothill and facing sweeping mountain views, is elevated 3 feet in deference to its location within a 100-year flood plain. Reclaimed wood speaks to its place in the West, large windows with clean profiles lend transparency and allow for big views, and multiple gables and rooflines add interest while reducing impact. A fire-savvy Corten steel roof lends a timeless appearance, while the rock — which varies in color, size, and shape — adds rusticity and ties the structure to the land. Original details include the branch-motif stair rail, glass pendants, and a copper slipper tub that sits on a bed of black Balinese stones. The homeowners, who did their own interior design, wanted the building to feel as if it had been there a long time. White wainscot- ing in the back entry lends a vintage feel.

While the initial concept was a compact cabin, it grew over time, then gradually was scaled down again to be more cozy and manageable. “It evolved from a pretty basic structure and got more complex and interesting and architecturally appealing,” recalls Barinowski. “It was going to be a simple cabin and became more of a retreat.”

Both husband and wife wanted the house to embody authenticity, and they made choices accordingly. “We wanted it to look and feel like an old, honest cabin as much as possible,” says the husband. “We tried to respect the homesteaders and do what they did.” The kitchen, for example, was designed to look as though different pieces had been collected over time. White copper-topped cabinetry by Stephan Van Ekeren of Top Shelf Cabinets contrasts with the base of the kitchen island, which is stained an unexpected deep purple. In the back entry/mudroom, white wainscoting gives a vintage feel while brightening up the otherwise all-wood space. An idyllic screened porch keeps the mosquitoes out and allows the owners to observe wildlife without being seen. The owners use it exactly as anticipated. “It’s a great spot; we eat out there several times a week,” the husband says.

The couple also envisioned a generous master bedroom suite, a screened porch, and as many windows as possible to access views of the Continental Divide and the Whitefish Mountains. The husband suggested a second guest room, the wife a writing retreat, and they made a practical decision to combine those two functions. The homeowners completed the interiors themselves, with the help of a couple of Skype consultations with the husband’s mother, who is an interior designer. They worked closely with the contractor and craftspeople, visited tile and stone suppliers, stores in Missoula, Whitefish, and Kalispell, and sourced some furniture and lighting from online purveyors, such as Restoration Hardware. The attention to detail is evident through- out the house, from the second story mezzanine to the idyllic covered front porch.

Despite the home’s preponderance of wood and its traditional feel, it has many unique touches, such as the copper slipper tub set on a bed of smooth, black Balinese stones; an art-like metal stair railing made of welded tree branches; and, in the master bath, a dramatic open shower with vertical slate tiles. “My mom told me that when two people are looking at photos or items in a showroom, if both are saying, ‘Yes, that’s cool,’ make the decision right then and there, because that doesn’t happen all that often,” the husband recalls. While the end result speaks for itself, what is typically a stressful process was more harmonious than harried. This is born out by the fact that when the homeowners began construction, they weren’t yet married. But the process and the outcome were so successful, they soon were.

“It’s a really livable house,” says Barinowski. “A couple could feel comfortable here for the rest of their lives. It’s well designed, it’s well laid out. There’s no excess, but there’s enough of everything.”