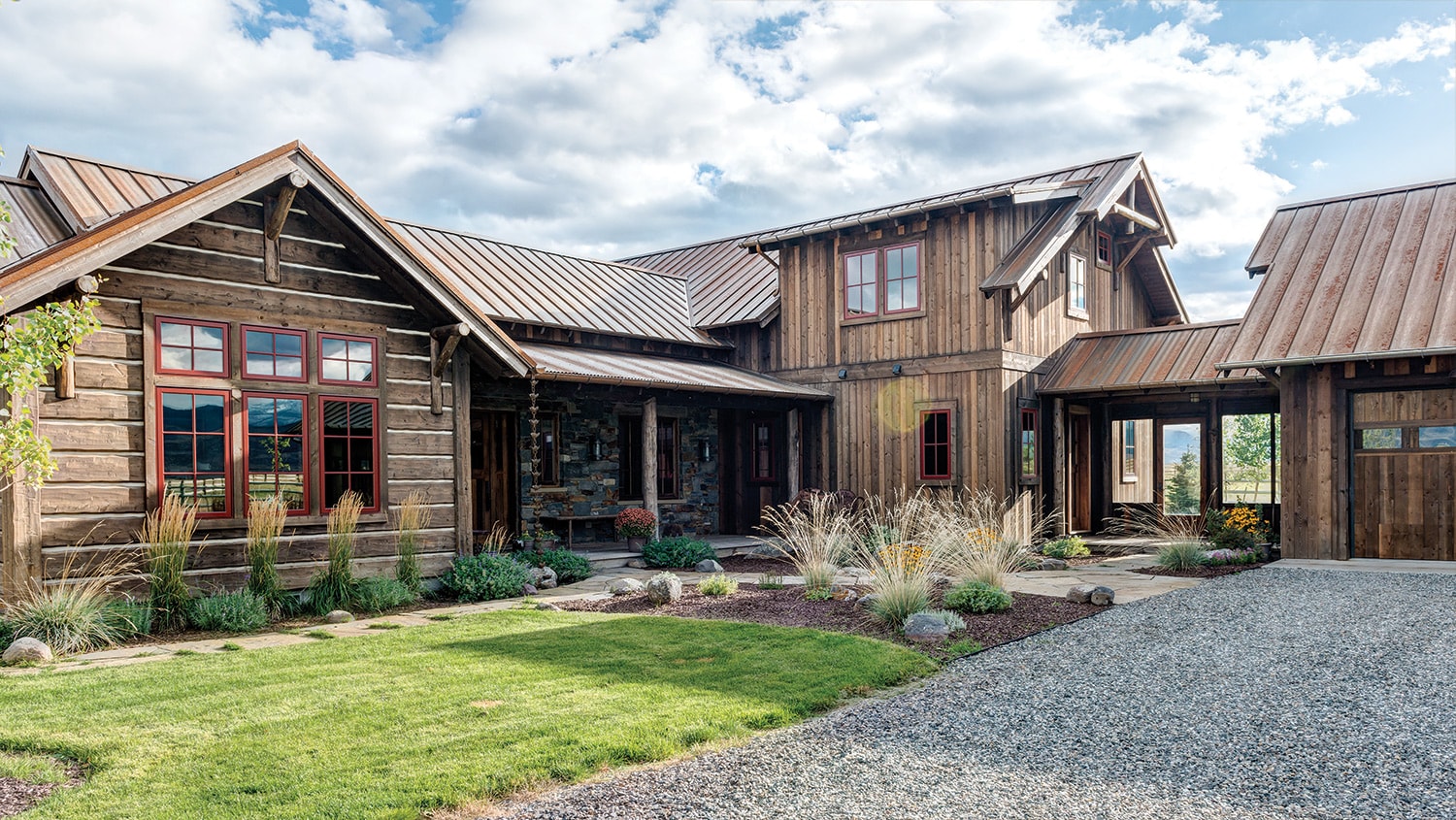 The home’s exterior, made up of rough-hewn timbers, logs, and stone, suits the owners’ Montana lifestyle and rustic sensibilities.

08 Feb Western Design: At Home on the River

For Jody and Sandi Marler, the move from fast-paced city living in Chicago, Illinois, to the serene mountains and rivers of Paradise Valley in Southwest Montana was a dream come true. While they were both confirmed city dwellers — he worked in construction on high-rise buildings, she was the vice president of advertising for the Discovery Channel — on the side, they pursued their outdoor interests every chance they got. “Over the years we have fished a lot of the great rivers in the Western states, but we always came back to Montana,” Jody recalls. “We would talk to people on the river and in fly shops to see what was hatching on the Missouri, in Yellowstone Park, or on the Madison, and fish those locations too, but Livingston and the Yellowstone were always in the middle of them.” 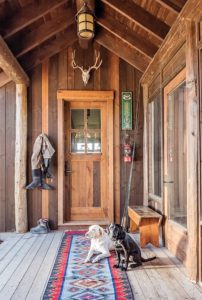 The homeowners’ two dogs sit in the breezeway, waiting to go fishing.

It was the centralized location and the area’s beauty that led them to select a 30-acre plot in a subdivision up Mill Creek, about 25 miles from Livingston. The new Montana home that Jody built himself, known as Fishcamp, is a reflection of the couple’s new rural life, a home base for the adventures he and Sandi would enjoy for years to come.

When it came to designing the home, they chose to work with architect Carita Adams, of the Livingston-based Adams & Associates. Adams and Jody worked closely throughout the siting and design process. “It’s pretty unique to have the builder on board through the design process, and it worked very well,” Adams says. “With him involved from conception to completion, he got it from the very beginning; he understands why everything is how it is, the intricacies.”

Jody knew he wanted a home that fit into the Montana landscape, one that looked like a rustic homestead that had been added onto over time. With this in mind, the office and master wing, made from hewn logs, was made to look like the original structure with the stone center section, porch, and taller main structure looking like later additions. “Sandi originally wanted a single level ranch house, but architecturally we had to go up to make all of the parts work,” Jody says. “Overall it works really well and has a great feel both inside and out.” 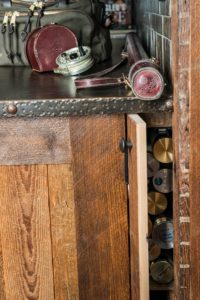 A custom-made, hidden door in the gear room reveals the homeowners’ fly rods.

For Adams, a few of the Fishcamp design particulars stand out and reflect the couple’s love for the outdoors. “The house is designed to suit the owners’ Montana lifestyle,” she says. “He’s a cabinet maker who has a passion for fishing and hunting, so the gear room is very well articulated. Also, we looked at what the best views are to orient the great room. His great room window is oversized, like a gallery-quality landscape that changes every day.”

The breezeway attaching the garage to the home is open on one side like a deck, and covered with glass on the windy side to protect it from the often harsh Paradise Valley winds. Jody accented the home with natural materials: Logs with chinking, stone, and unmatched vertical siding lend the appearance of age and character. “It has an authenticity through the honest use of materials and colors selected to be sympathetic to and compatible with the surrounding landscape,” Adams says.

Adams also helped the Marlers design outdoor living spaces and outbuildings to house their fishing boats and other equipment, creating a compound of sorts. In the end, she feels like the home truly embraces the couple’s love for their newfound home. “We wanted to be sympathetic of the site and not to make this giant, oversized house,” she says. “We scaled it relative to the landscape with the right-sized rooms. We often ask, are you creating a living room or a lodge? It’s a human scale thing that embraces the Montana lifestyle.” 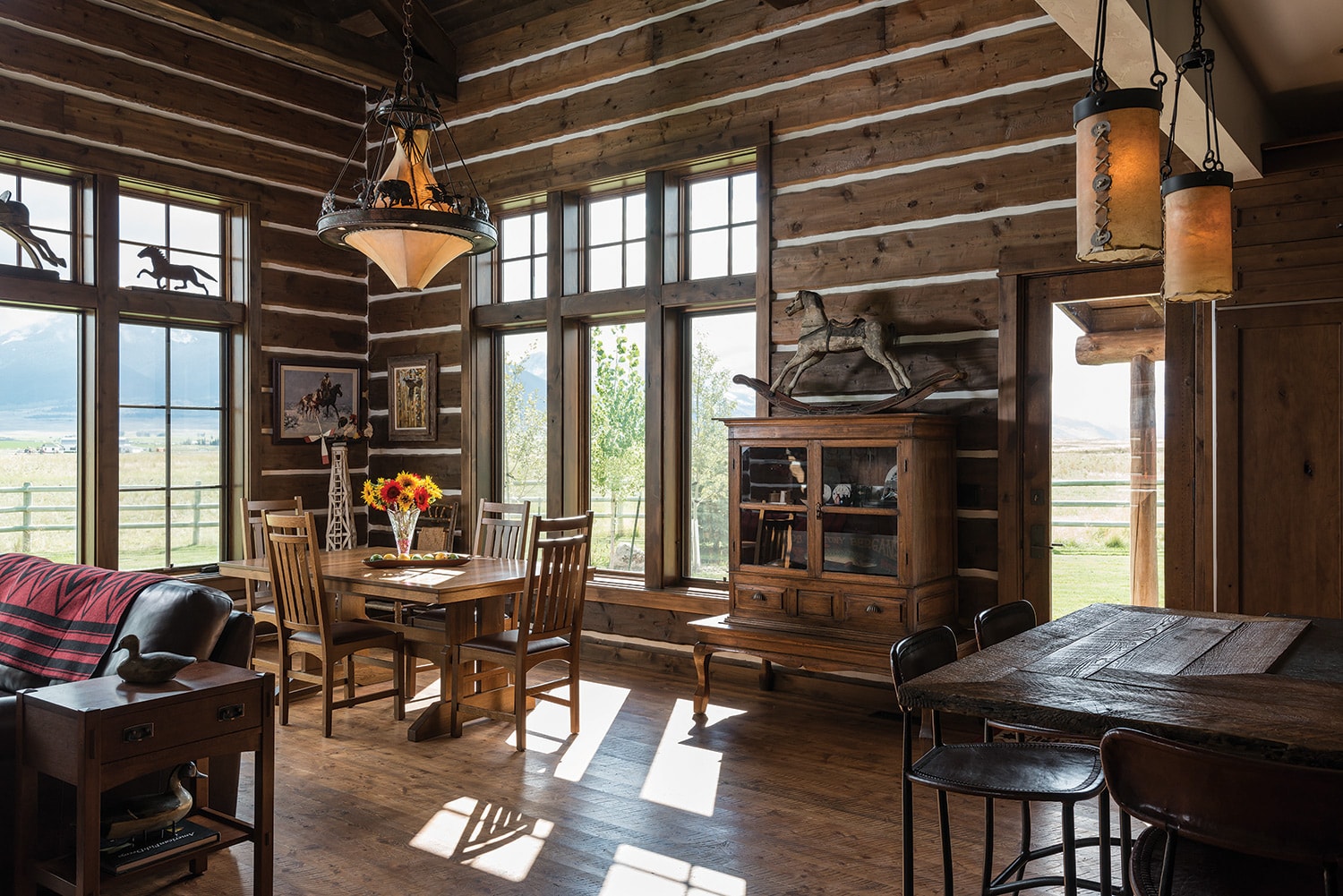 The Marlers’ home now serves as a prototype, as Jody and Adams often team up to build homes for others in the area through his company, Fishcamp Custom. But mostly it serves as the couple’s base from which they enjoy the great outdoors. Often, after a day on a construction site, Jody will come home, grab Sandi and their drift boat, and then spend the evening fishing the nearby Yellowstone River. 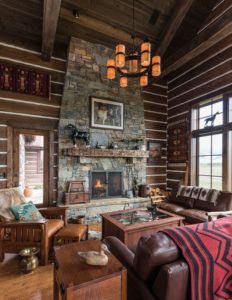 The Marlers took on the interior design themselves, using art collected at The Russell event, during Western Art Week in Great Falls, Montana, along with antiques gathered over the years. “That adds so much to the house,” Jody says.

“I am all about the Montana lifestyle, and a lot of it is about fishing,” Jody says. “I’ve always said that the clients we had in Chicago were there primarily for work. It was not necessarily where they wanted to live. But the clients we have here in Montana have been successful wherever they came from. They choose to be here. It makes for great projects and ultimately friendships. We never had friends like we have here in Montana. We are all here for the same reason.” 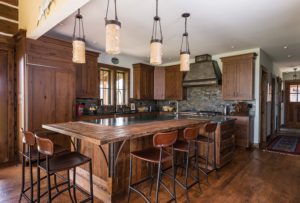 The kitchen island, along with the exterior doors and cabinets in the gear room, were made from reclaimed yellow pine. 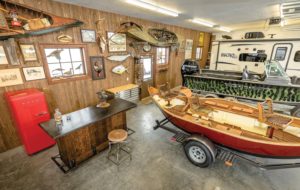 The “toy shed” features the couple’s collection of antique hunting and fishing gear as well as a custom, reclaimed hewn bar, with a foot rail and steel top added by a local blacksmith. A custom-made drift boat by local Jason Cajune sits next to a 21-foot Lund used for chasing walleye on Fort Peck Lake. 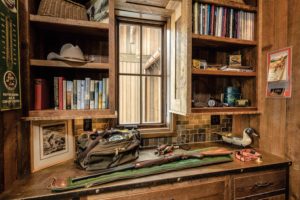 Antiques and artwork add color to the reclaimed wood in the gear room. The cabinetry has plenty of drawers to store fly boxes, reels, and other fishing accessories. Photo by Dan Armstrong