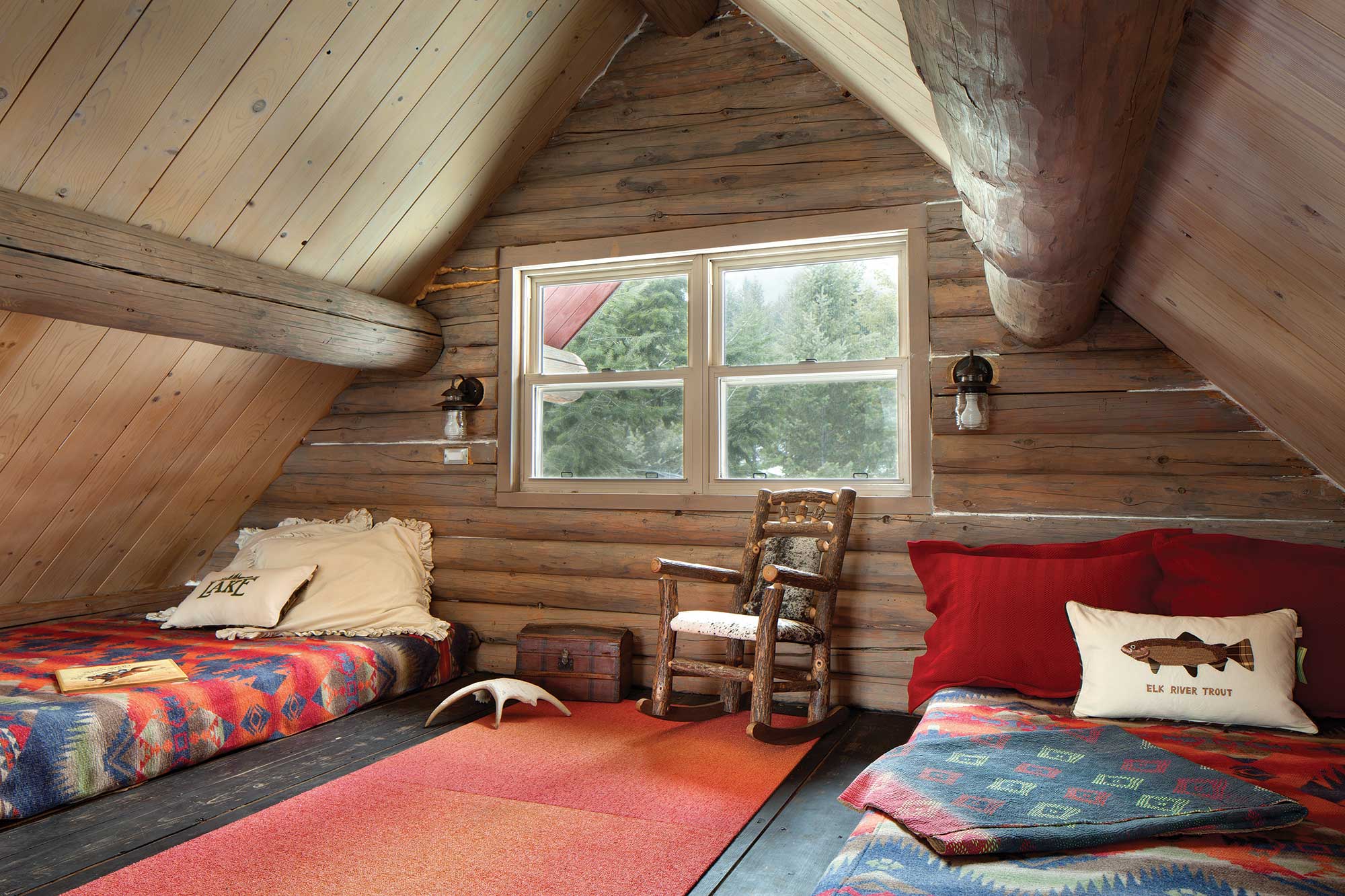 When interior designer Hunter Dominick and her husband Bayard purchased property on Othorp Lake outside of Eureka, Montana, their vision was to build a modest vacation home in a quiet place on the water where people could gather and connect.

“Bayard’s parents met at hunting and fishing camp in Canada,” says Hunter. “So it’s been a tradition for generations of their family to get together at this camp each year. We wanted to create that same kind of environment for our family and friends.”

The original plan was to design and build a house on the property in 10 years. But that plan changed quickly. The following summer they attended the annual West Kootenai Amish Auction in Rexford, Montana. On impulse, they bid on — and won — a cabin built by Northwest Log Homes, a local Amish craftsman-owned company.

“A portion of the proceeds from the auction go to supporting the community’s schoolhouse, which is a one-room building,” explains Hunter. “I had heard about this auction for years and had gone with the intention to buy some quilts or furniture. Little did I know that we would leave with an entire cabin!”

The Dominicks hired the cabin’s original craftsman, Dwayne Kelm, to pour the foundation and place the structure on their property. While tempted to put the cabin close to the water, they opted for a different solution, positioning it further up on a knoll.

“We did this for a number of reasons,” says Hunter. “But largely to take advantage of the views — it’s really interesting terrain. The cabin looks out to Canada, the Kootenai National Forest, and the Ten Lakes Scenic Area.”

The cabin may not have been specifically designed or built for the family, but it has evolved organically into a serene getaway that’s uniquely their own. With a footprint of less than 800 square feet, the one-bedroom cabin and loft is a striking blend of simplicity and style.

While the structure is clearly a log cabin, the overall aesthetic is far more modern. Among other things, the couple bonderized the wood of the original structure and added rusted metal to give the exterior a more contemporary, rugged feel. What was originally a carport became the master bedroom. Inside, the original railings have been replaced with tubular steel. The ceiling and doors are pickled to make the living space lighter and brighter.

In the main living area, every square inch of space is used. A couch sitting near a wood-burning stove serves as the living room. The kitchen area features a refrigerator, range, shelves, plus a simple steel cabinet and countertop — basic, yet fully functional. While meals typically are served outside on the patio during warmer months, a rustic table and chairs act as a dining room. Overhead, a loft area is designed to sleep “as many kids as possible.”

“We also added a screen door,” says Hunter. “There’s not a lot of bugs up there so it’s kind of counterintuitive. It might be my southern upbringing, but there’s something about hearing the smack of a screen door opening and closing that just feels right to me.”

A bank of high, square windows in the master bedroom allow light to come in, while still providing privacy. Two vintage doors purchased from a garage sale open up to a small patio that overlooks breathtaking views of the lake and surrounding mountains.

“Originally, we intended there would be no electricity — it would be completely off the grid,” says Hunter. “But around the same time, they had run quite a few utilities in our area, so we decided to take advantage of that.”

To furnish the place, the designer relied on rustic family heirlooms culled from Bayard’s former family cabin, rounded out with basic IKEA purchases and local finds. Fabric remnants were used to re-upholster an old couch. Cups carved from pine dangle from a primitive wall hanging. The interior doors are made out of wood from the original carport.

“A lot of our friends will come and camp on the property and use the house as a home base,” Hunter says. “It’s one of the reasons that the bathroom sink stands separate outside the water closet — the kids can gather round and brush their teeth and not tie up the bathroom.”

The cabin is used equally in the winter, making it an idyllic, year-round retreat. Othorp Lake is shallow and freezes easily, quickly transitioning into an ideal place to ice skate, play hockey and cross-country ski.

“What I love most about this place is that it’s kind of a little haven. It’s less than an hour door-to-door from our home in Whitefish and not even five miles from Eureka and Lake Koocanusa,” Hunter says. “So while it’s in the middle of nowhere, it’s still very accessible. And, no matter how old the kids are, they go outside and play. No one is on a phone. No one is plugged in. It’s truly a place to get back to basics.” 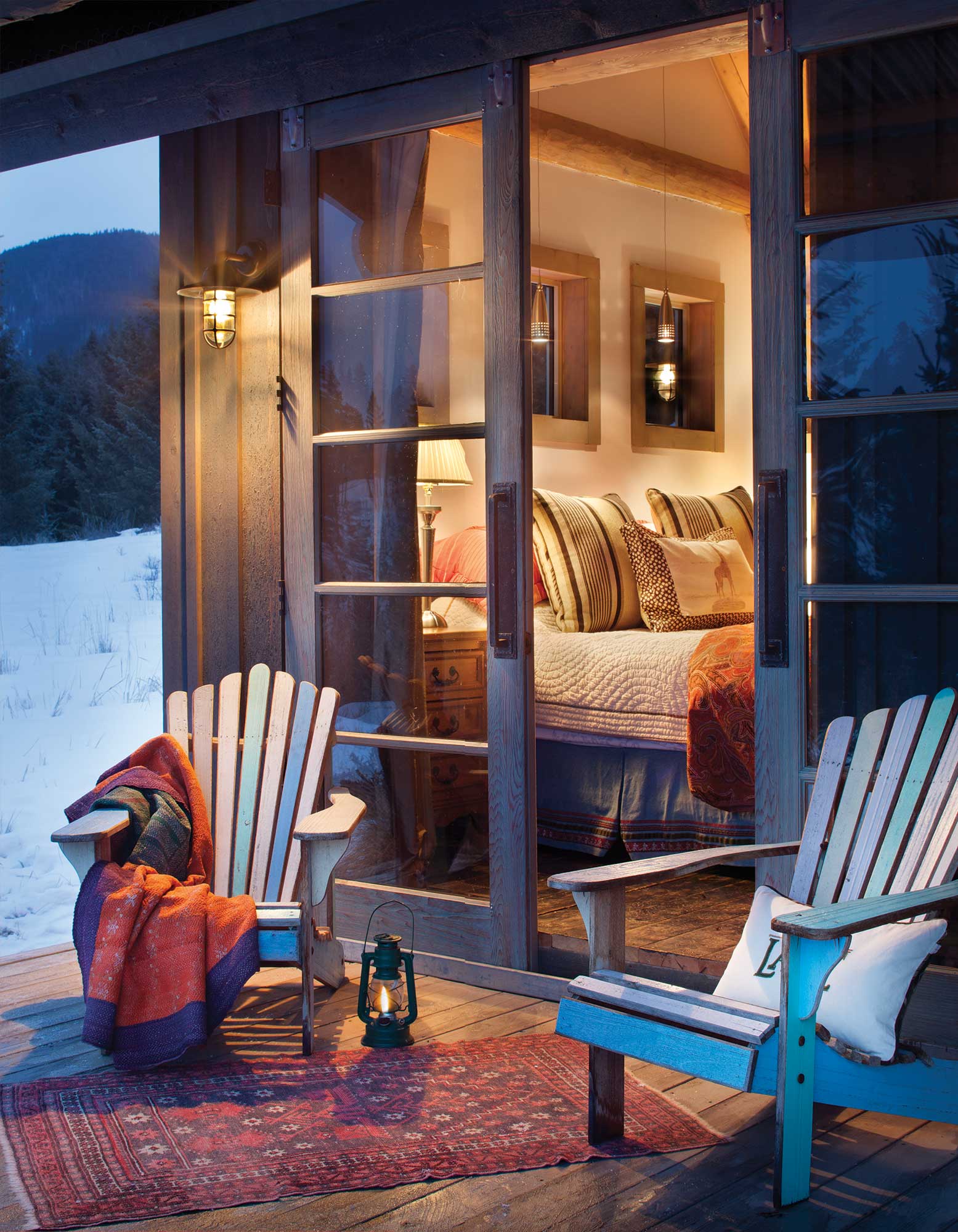 Vintage wooden doors connect the bedroom to a cozy porch with a lakefront view. 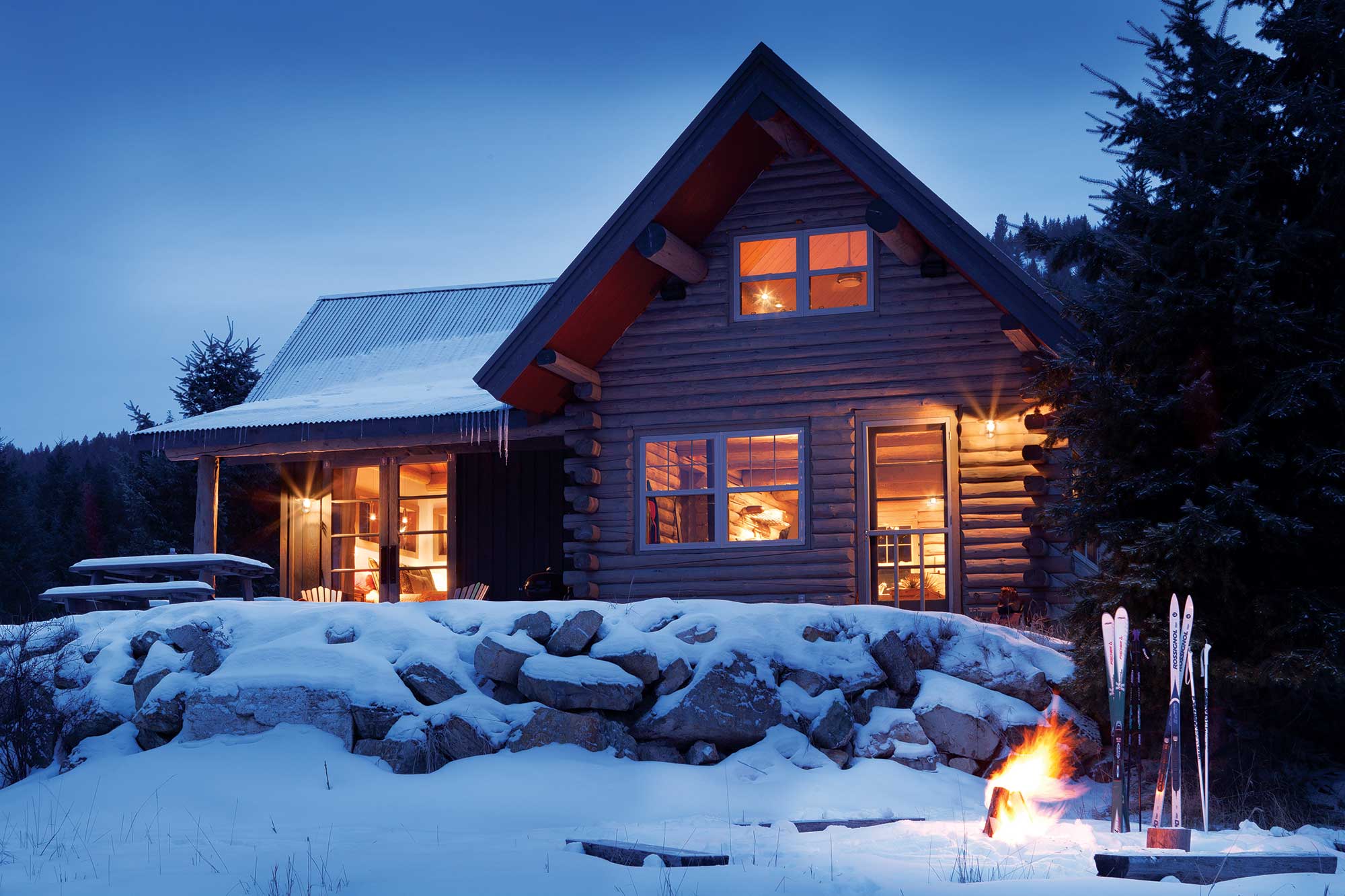 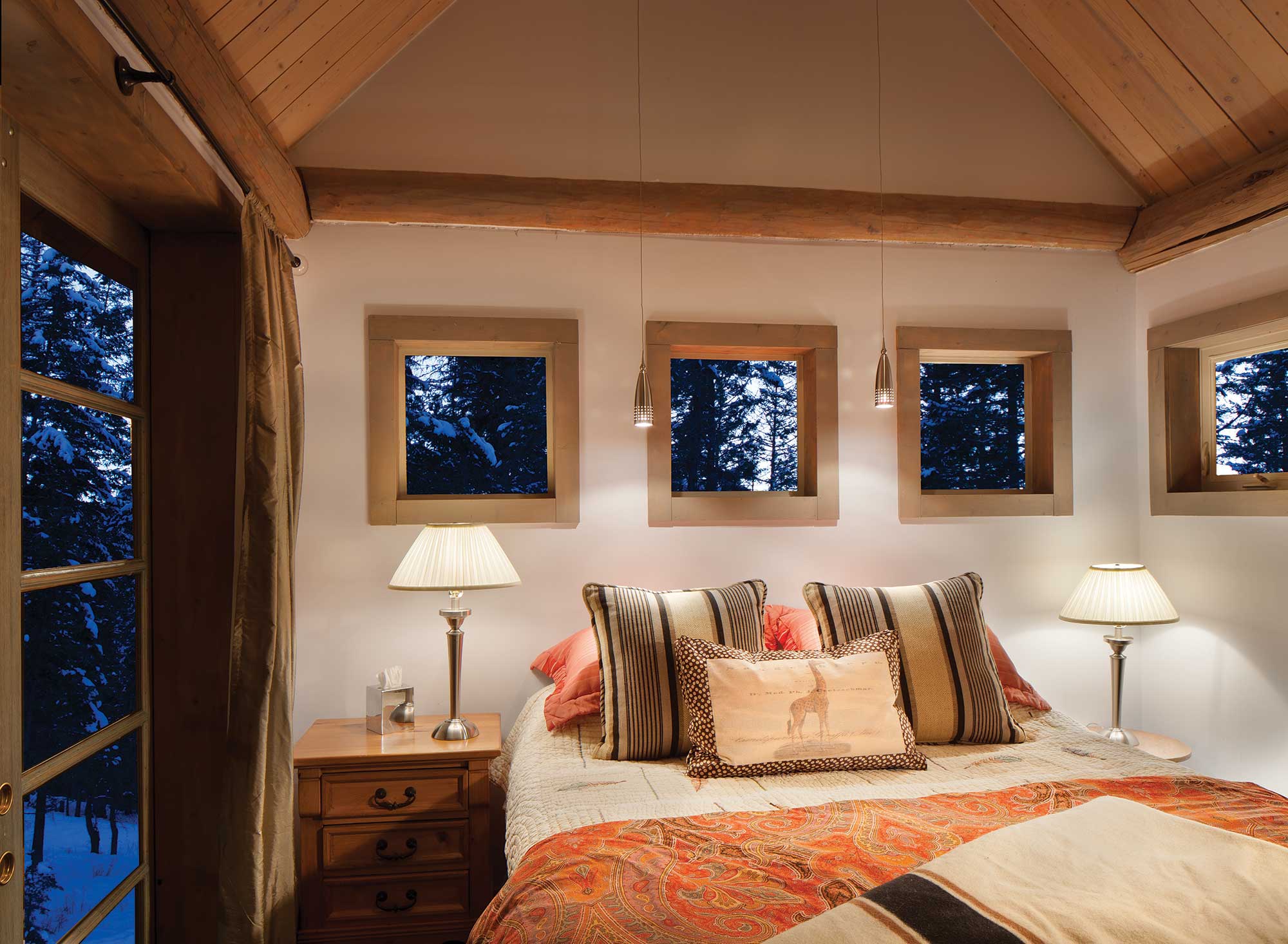 Originally a carport, the contemporary master bedroom is open and airy, yet still private. 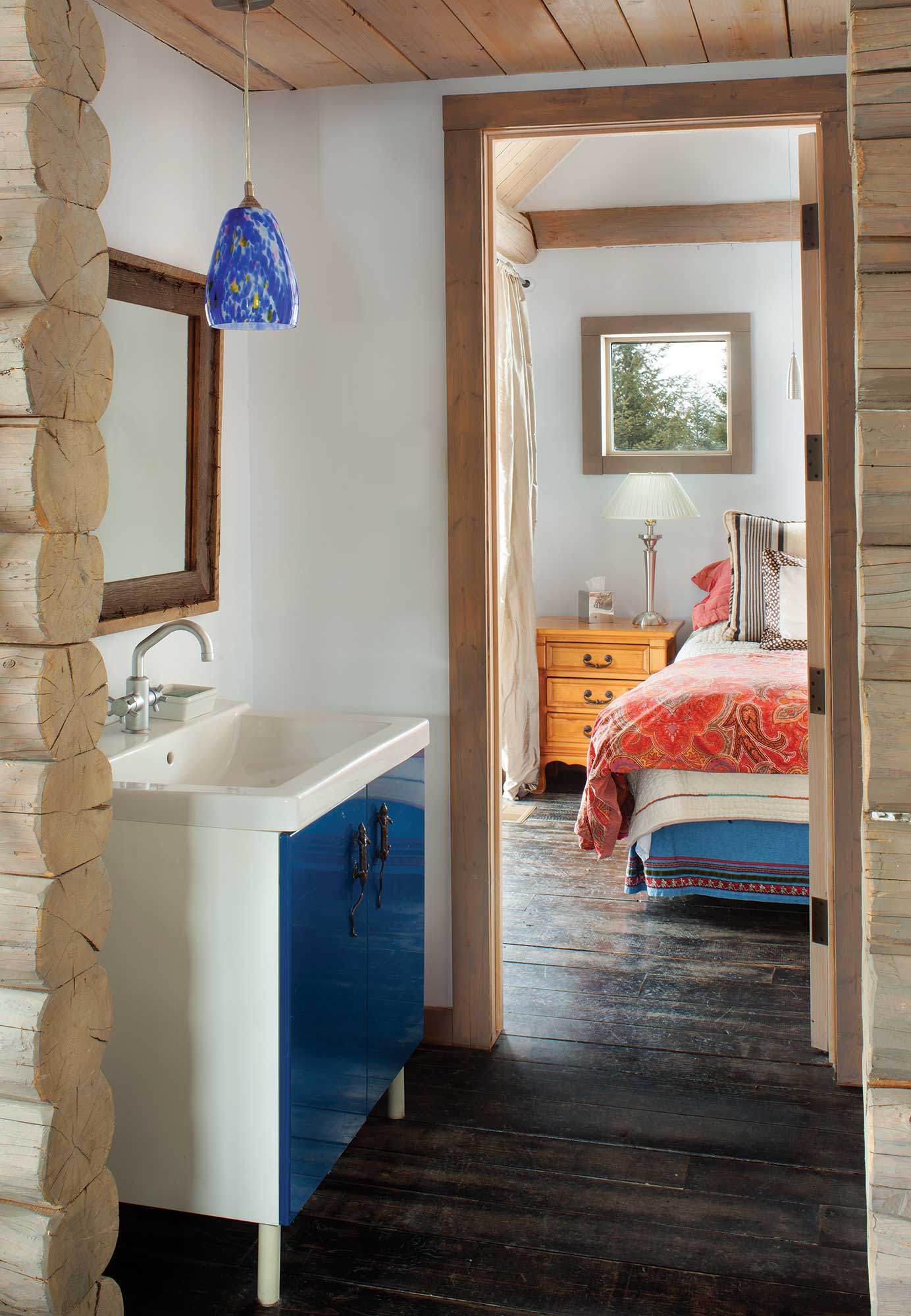 A standalone bathroom sink is positioned outside of the water closet, maximizing space and functionality. 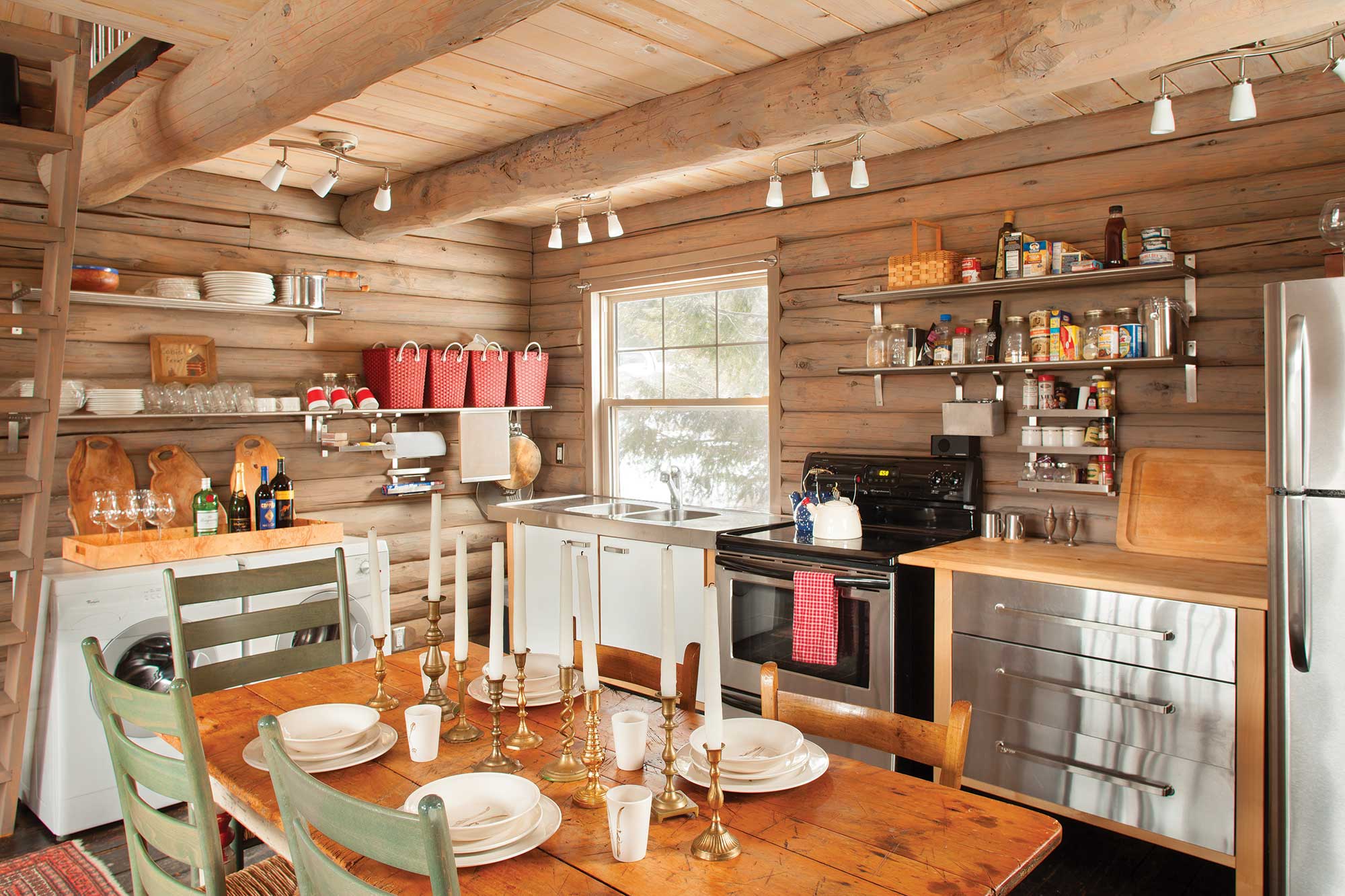 In the kitchen, not a square inch of living space is wasted. 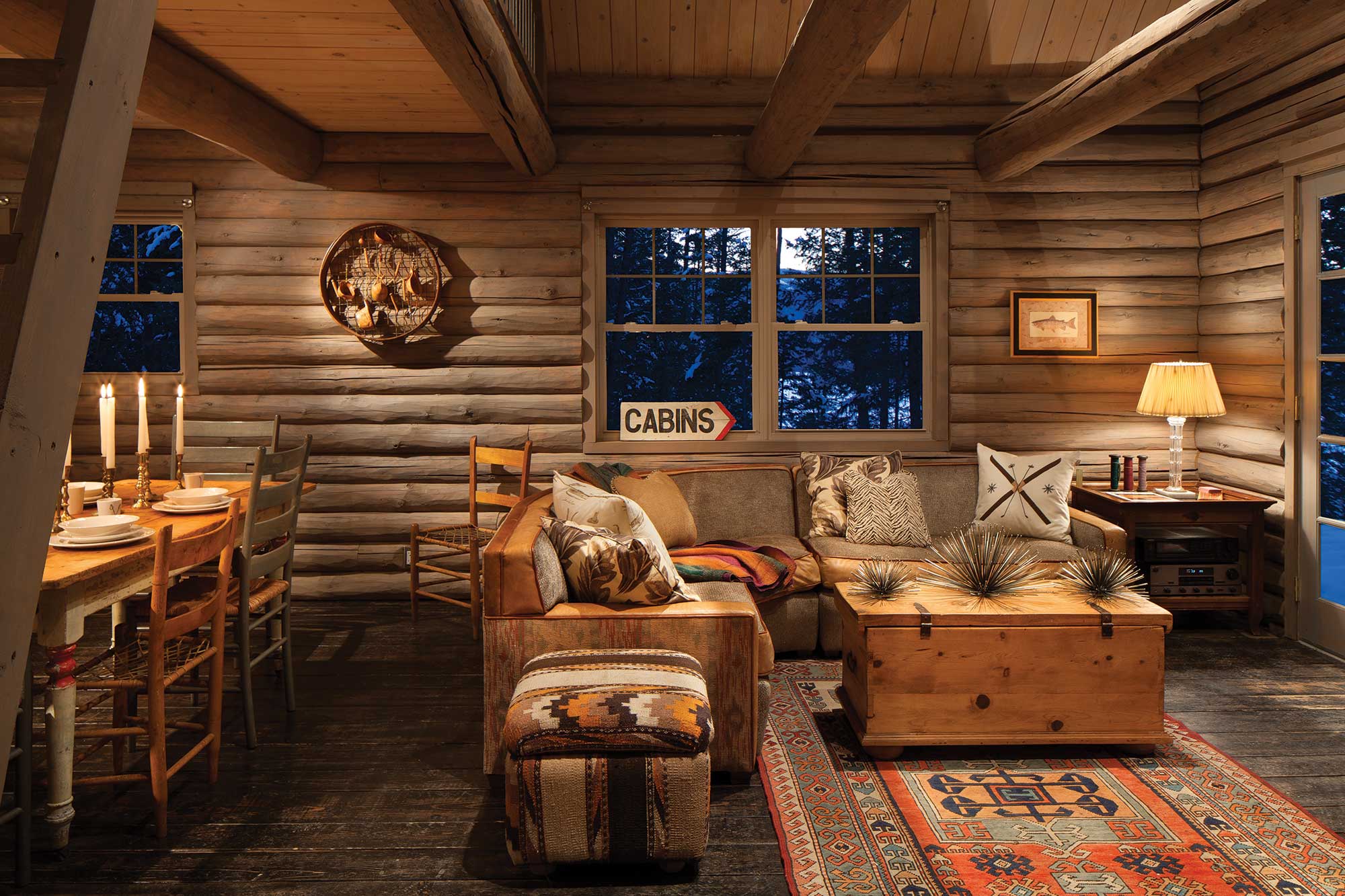 Rustic family heirlooms, including a large, sectional sofa reupholstered with fabric remnants, are used to furnish the cabin.

An overhead loft area is designed to sleep “as many kids as possible.” 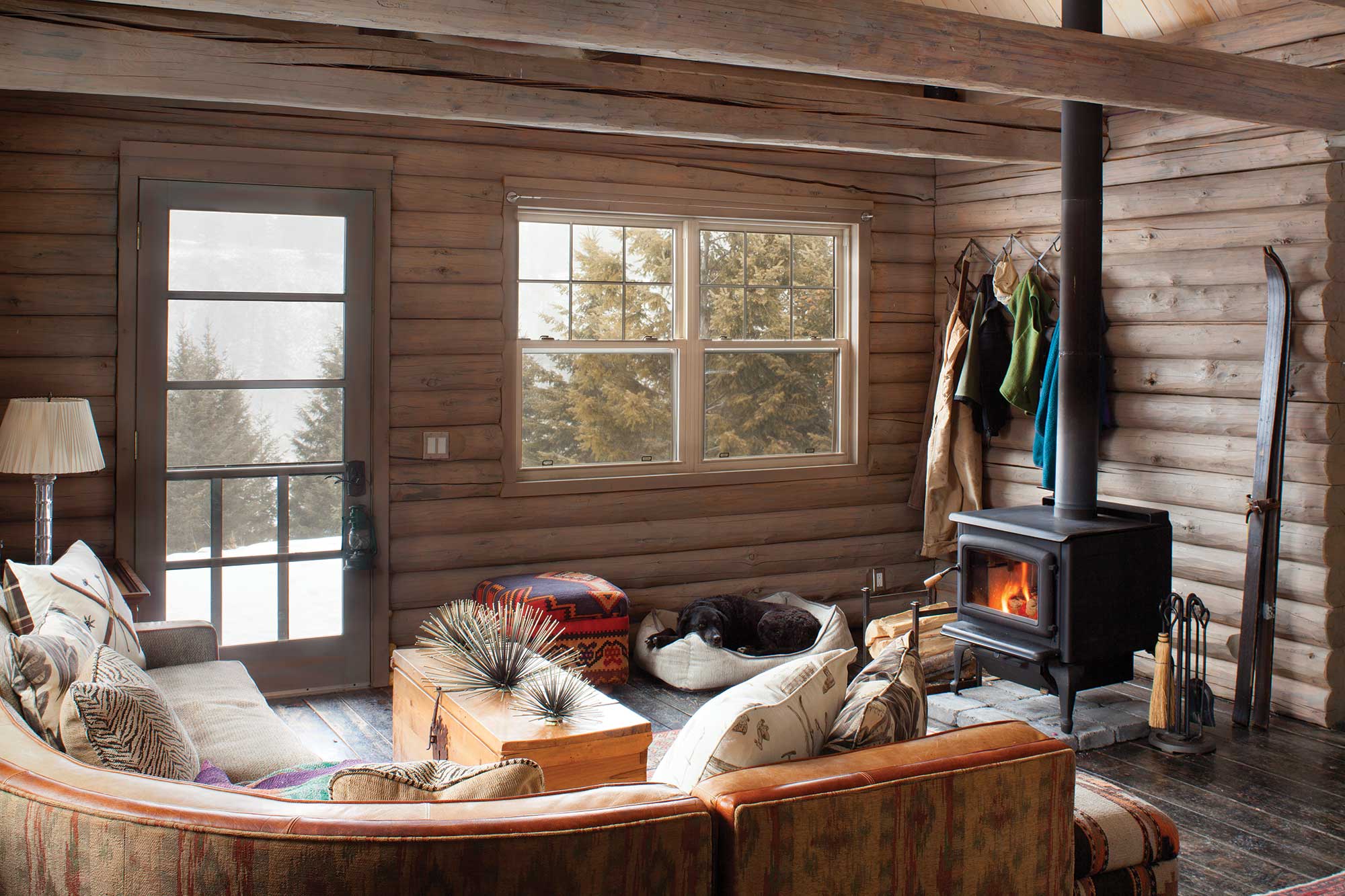 Situated near a wood-burning stove, the couch is a cozy spot for reading, reflection and relaxation.