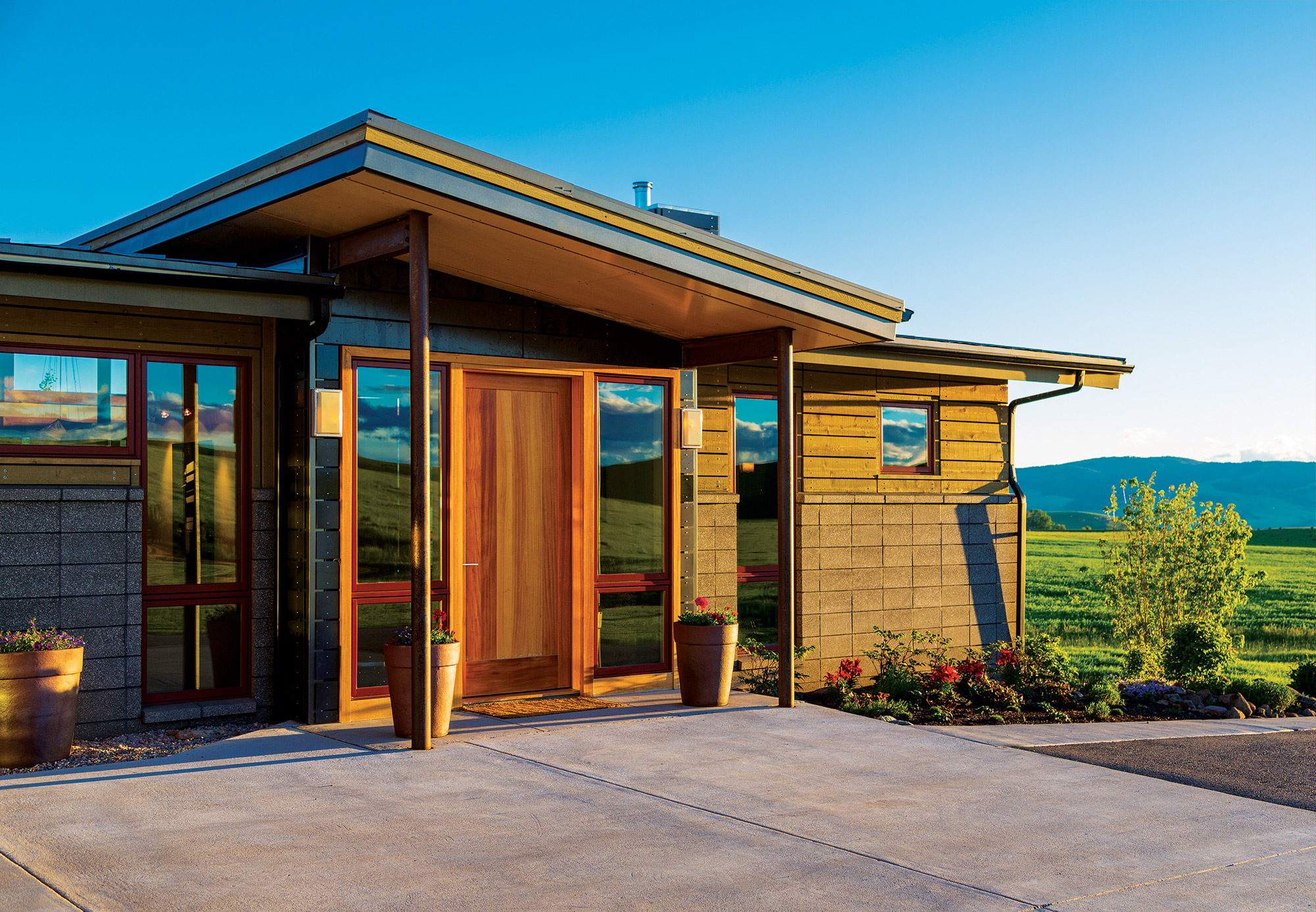 A few years after Bozeman was founded in 1864, Bob Harvey’s family began making their livelihood off the land in the Gallatin Valley. A granary, barn and one-room cabin overlooked the pristine rolling farmland that comprised their homestead near the foothills of Wheeler Mountain.

Over time, the barn and cabin fell into disrepair and were demolished in the late ‘80s, but the granary still stands near its original location. Today, nearly 150 years after it was built, the granary is in the process of being restored, given new purpose as a guest quarters and art studio next to the recently constructed home of Harvey and his wife, architect Chere LeClair.

The principles inherent in LeClair’s design philosophy, coupled with the deep respect for the land that grew from this family history, led them to create a home that pays homage to its agricultural setting. LeClair sought to add to the site’s narrative in a respectful manner, so she made this the primary focus of the house’s orientation and material palette. She used the granary as an influence in the home’s design, which was built roughly in the same location as the demolished cabin and barn.

“The driving force was trying to keep it quiet on the site, to be reverent to this place so that [the home] didn’t dominate the setting,” LeClair says.

LeClair, who teaches architecture at Montana State University, designed the two-story, 3,900-square-foot home to include three bedrooms and three-and-a-half baths. Her husband oversaw construction, completed in 2008, with the help of a group of subcontractors she can only describe as artists. Interior designer Carol Merica, of Design Associates, was an integral partner in the home’s design.

Two-by-eight-inch planks of cedar were stained a muted green and applied to a majority of the home’s exterior, in order to harmonize with the landscape and to minimize the home’s appearance. These planks are spaced apart from one another to create texture and depth on the home’s facade and to break up the building’s volume. In addition, LeClair selected materials that reference the utilitarian nature of homestead-era buildings. Steel elements were left in their raw state, to weather and measure the passage of time and to recognize humble agricultural architecture, she explains.

Inside the home, this interpretation continues as refined materials contrast with industrial characteristics. Birch veneer on the ceiling juxtaposes concrete floors, and the staircase leading downstairs to the media room, children’s bedrooms and baths incorporates reclaimed wood in addition to stainless steel cables on the railing.

The other primary intent of the home’s design was to capture the peaceful view. The house is oriented to maximize the panorama of the distant Spanish Peaks in the southwest as well as the surrounding pastoral acreage, blending indoor and outdoor living with patios that link the primary living areas to the outdoors. In the great room and kitchen, the views dominate through a large expanse of southern-facing windows. Move into the more private regions of the home and the views become more intimate. LeClair placed a row of square windows in the garage, for example, to frame the moment between horizon and skyline.

In order to accommodate the southern view and manage heating and cooling concerns, LeClair designed the angle of an overhang on the home’s south side relative to that of the sun. During the winter, the low sun radiates through the windows into the primary living areas, allowing the floor to act as a thermal mass. When the sun rises in the summer, the angle of the sheltering overhang helps keep the house cool.

The home’s interiors, designed by Carol Merica, are warm and contemporary. Merica chose to emphasize the architecture and the view by using texture and limiting focal points within the home.

“You don’t need artwork in this house because the artwork is really the setting,” Merica says. “It’s about being subtle and really letting the view speak for itself.”

In her design practice, Merica seeks to appeal to classic sensibilities, creating spaces that avoid appearing dated by keeping interiors simple but sophisticated. “If it’s done right, [design] is like an art form,” Merica says. “And it’s a shifting art form here because the light is always changing.”

LeClair looks across the fields that surround her home and remembers the relatives whose lives were tied to that land. She remembers when her boyfriend first showed her this place, and their wedding reception here in the backyard. She knows the story of the red fox that hunts for field mice, visible from her office window, and she knows the time of year the elk will move down from the tree line and appear in the alfalfa fields. She watches as crops are planted in rotation and grow in the sun.

LeClair created a home for gatherings, a structure that honors the past and the site, providing a space for her own family to contribute to the landscape’s heritage. To her, this is what it means to be home. 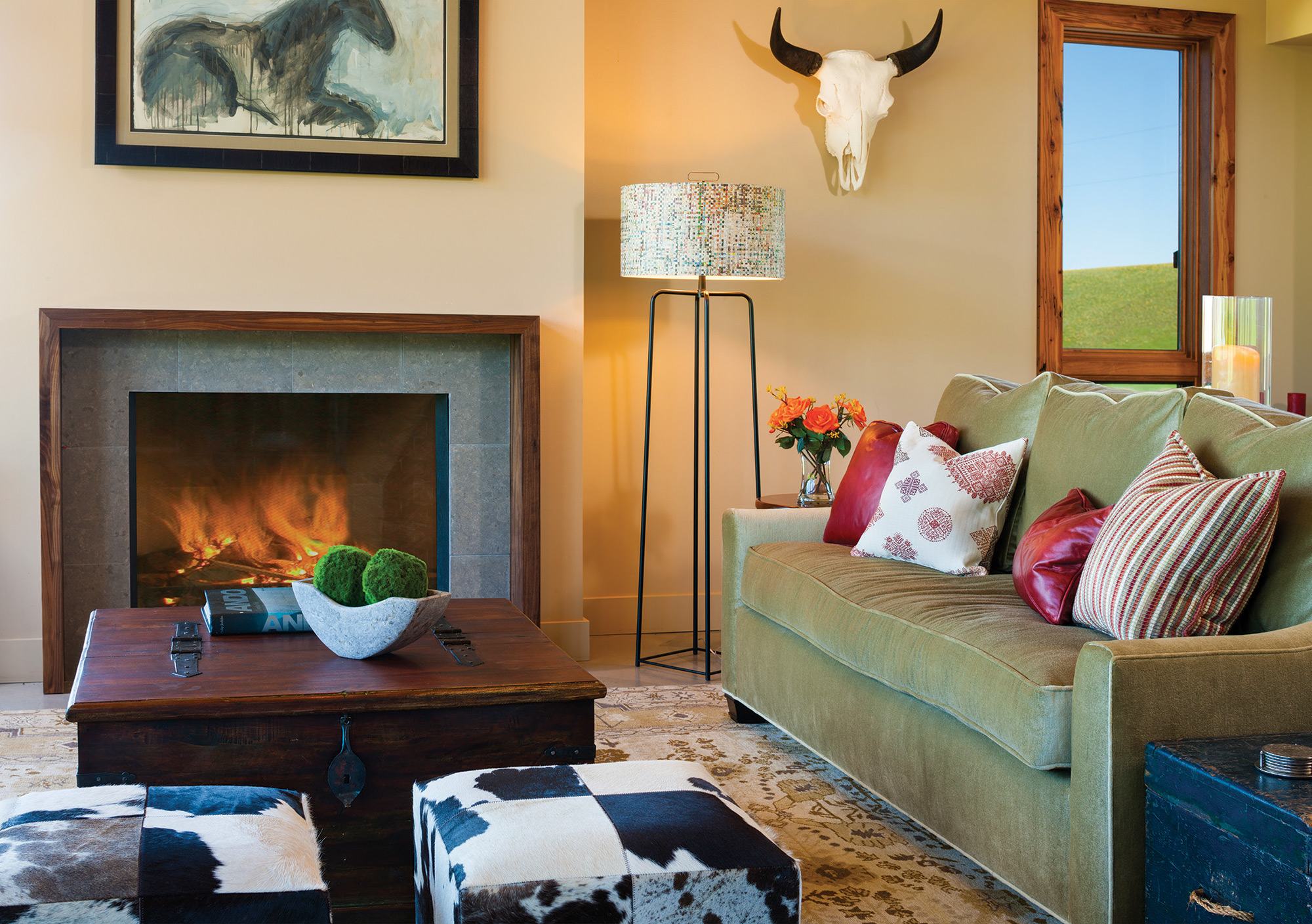 Interior designer Carol Merica chose elements that were classic over trends that fade. “You inhabit the spaces your clients are going to inhabit, you grow with them. It becomes really personal,” Merica said. 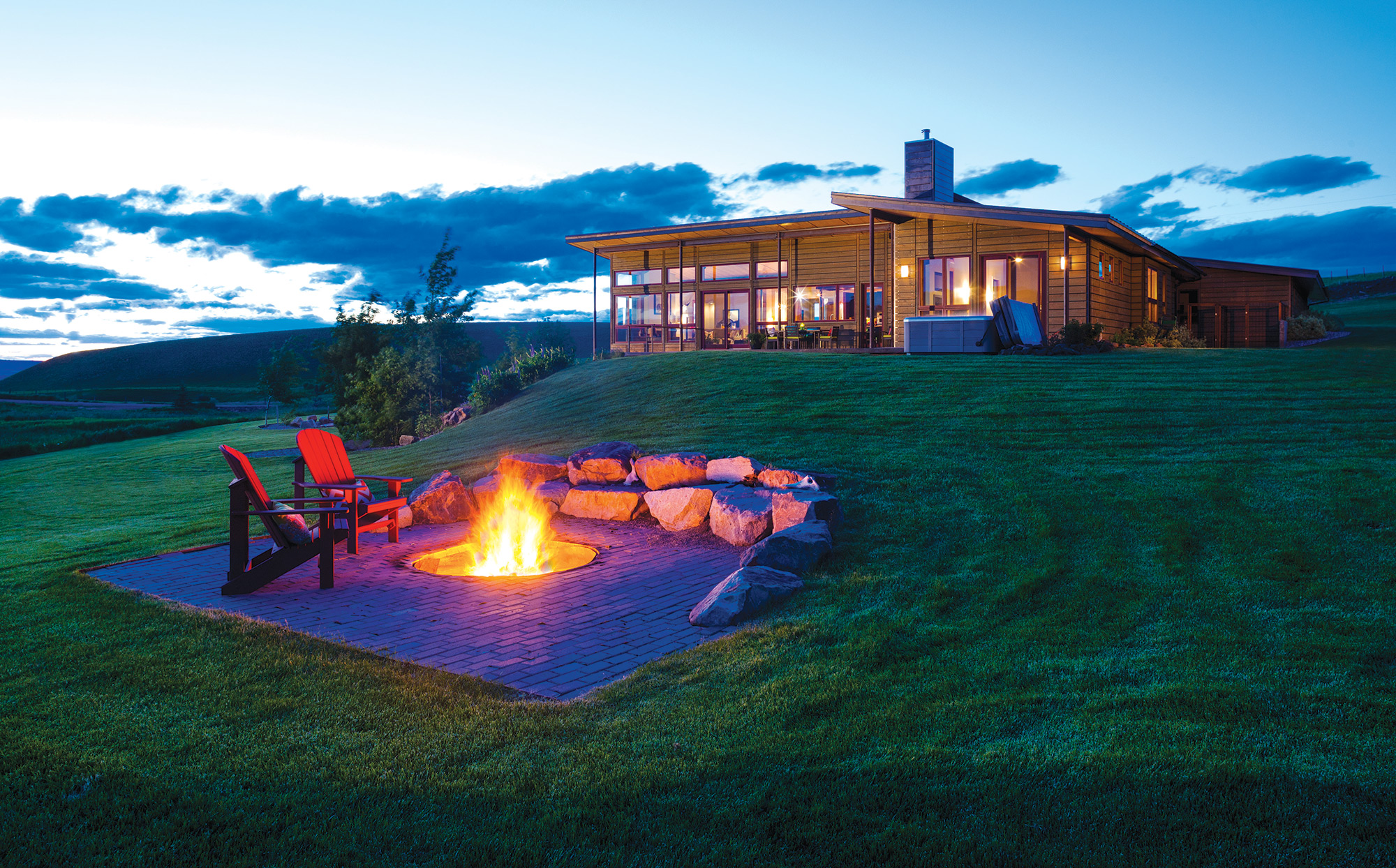 In the evening, LeClair and her family enjoy the outdoors with a sunken fire pit. LeClair design the interior ceiling planes to extend over the decks outside. 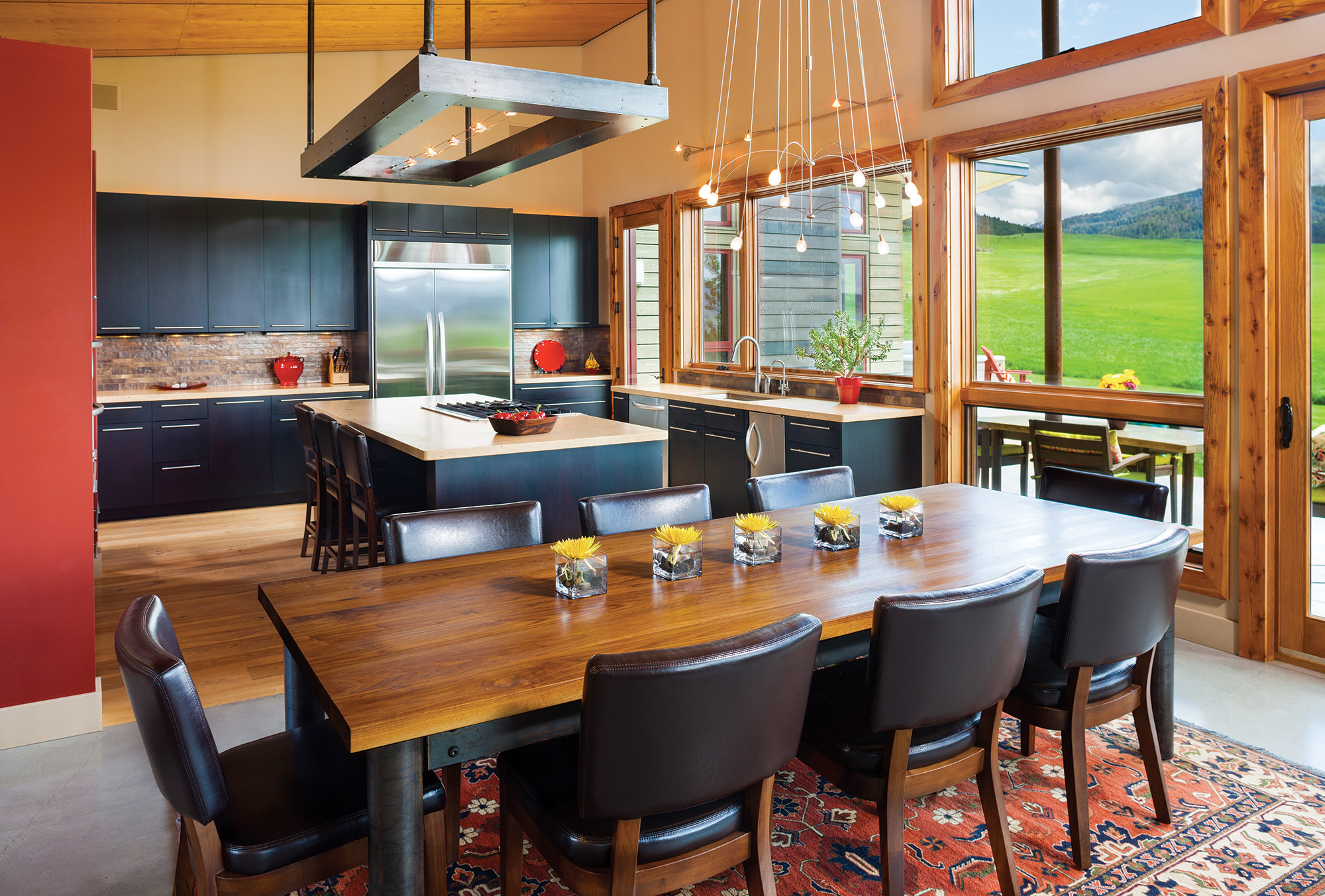 The home’s open floor plan leads from the kitchen to the dining area and into the living room. This space was designed to accommodate large groups of people. 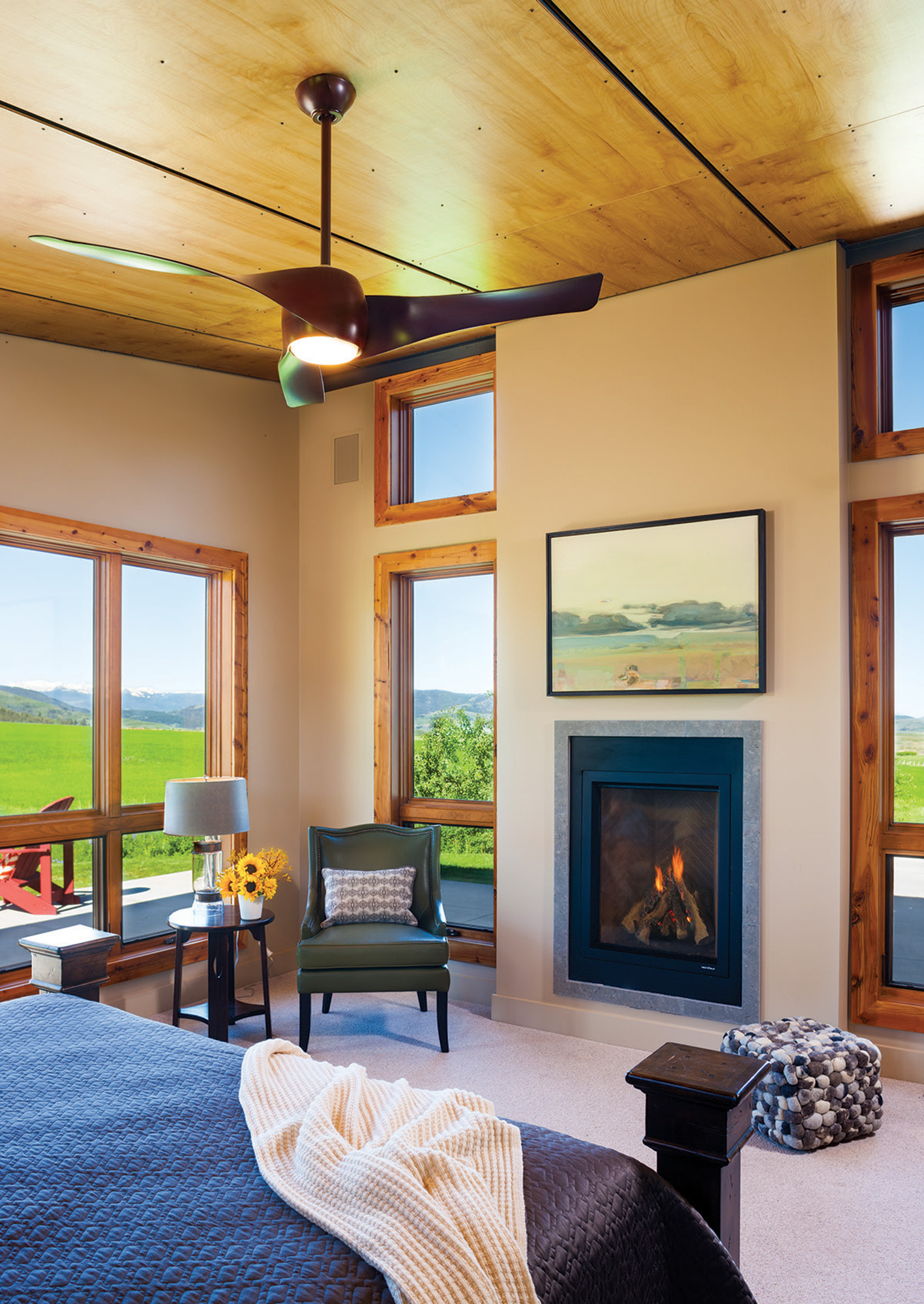 Interior elements avoid competing with the view and were chosen to emphasize the architecture. “I’ve lived here for seven years and some days I’m like ‘wow, that’s really neat,’ [as though] I’m still discovering the house,” LeClair said. “And I think good architecture does that.” 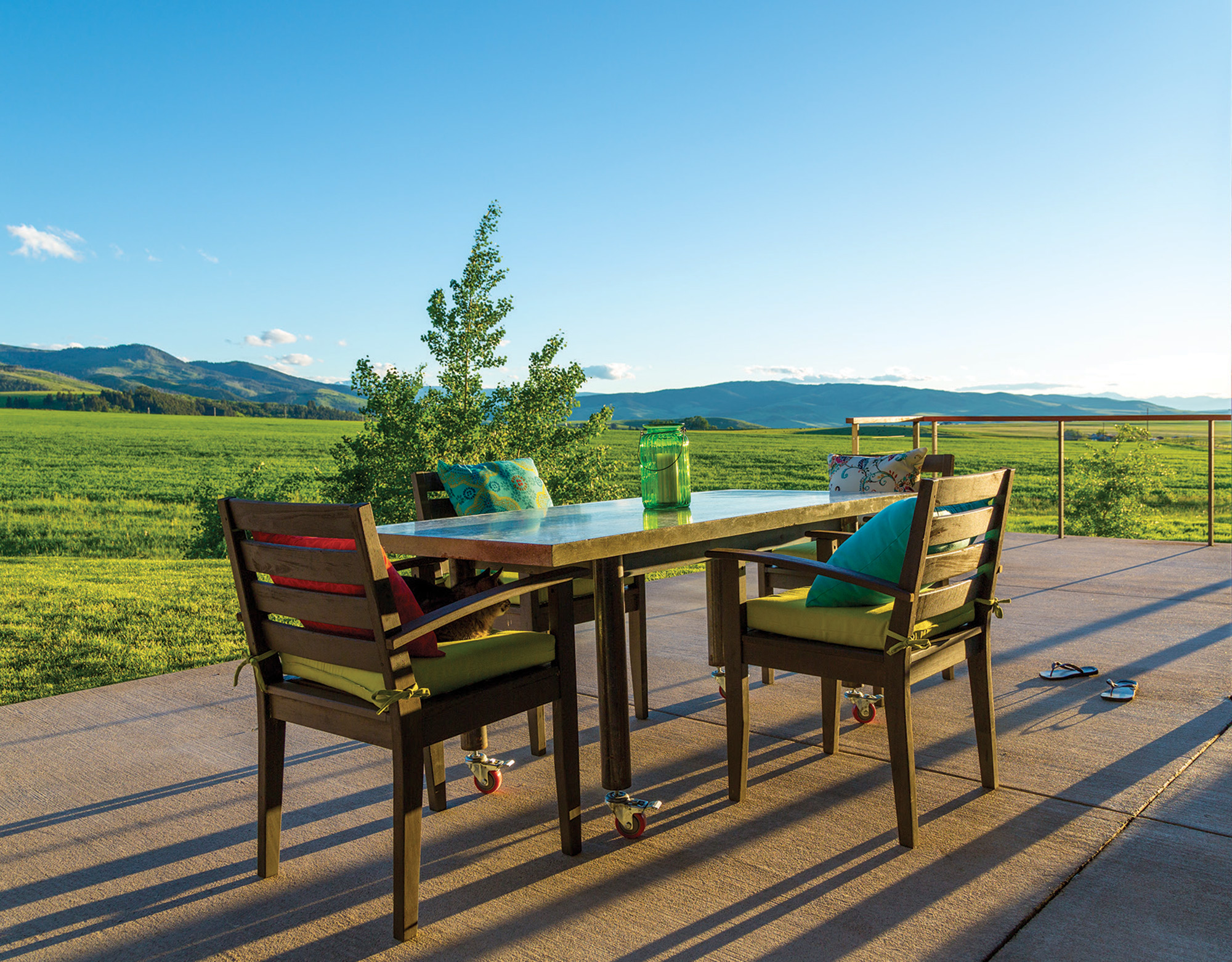 The outdoor patios increase the square footage of the home and are enjoyed as much as the interior spaces.

The expansive pastoral landscape is reflected in the home’s widows at dusk. Architect Chere LeClair sought to design a home that celebrated the unique condition and attributes of its location. “I think that the essence of design [is thinking about things before doing them],” LeClair said. “So often the site isn’t given the kind of meditation and reflection that it deserves.” 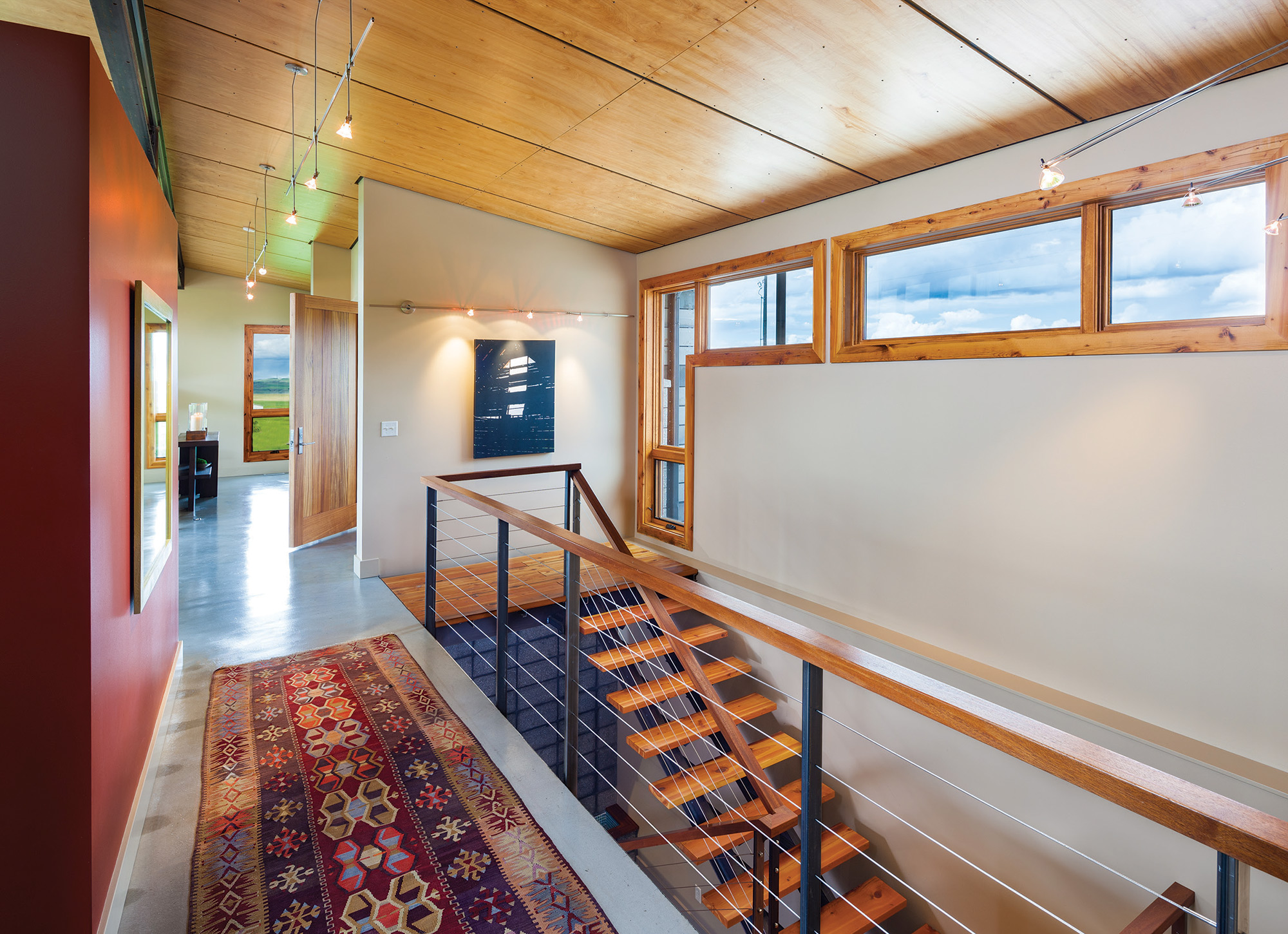 LeClair salvaged lumber from a local granary and used it as the interior trim around the doors, windows, staircase landing and stairs. Although refinished, the wood reveals remnants of its past life with nail holes and deep stains from extensive weathering. 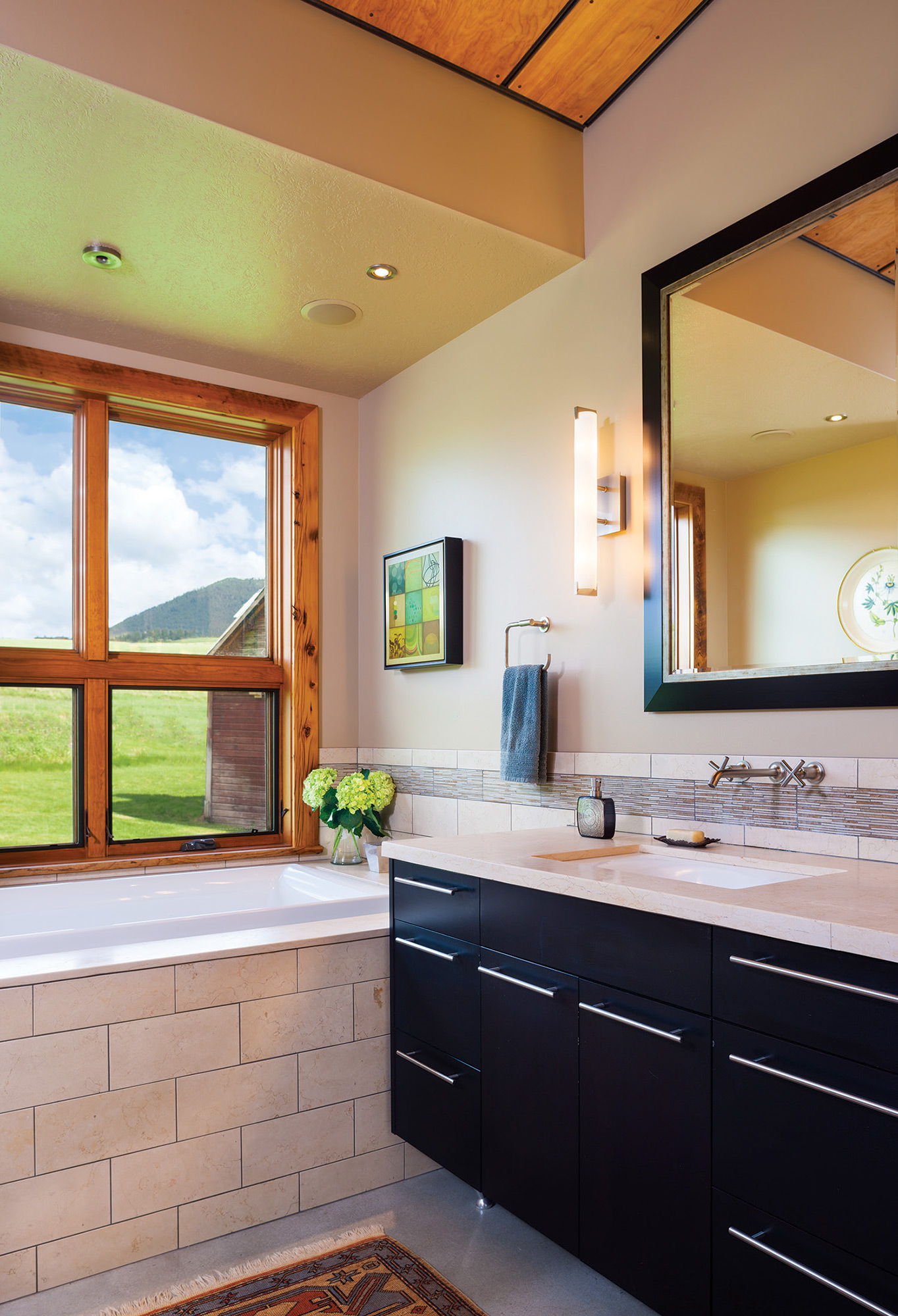 Bob Harvey designed the under-counter sinks in each bathroom.