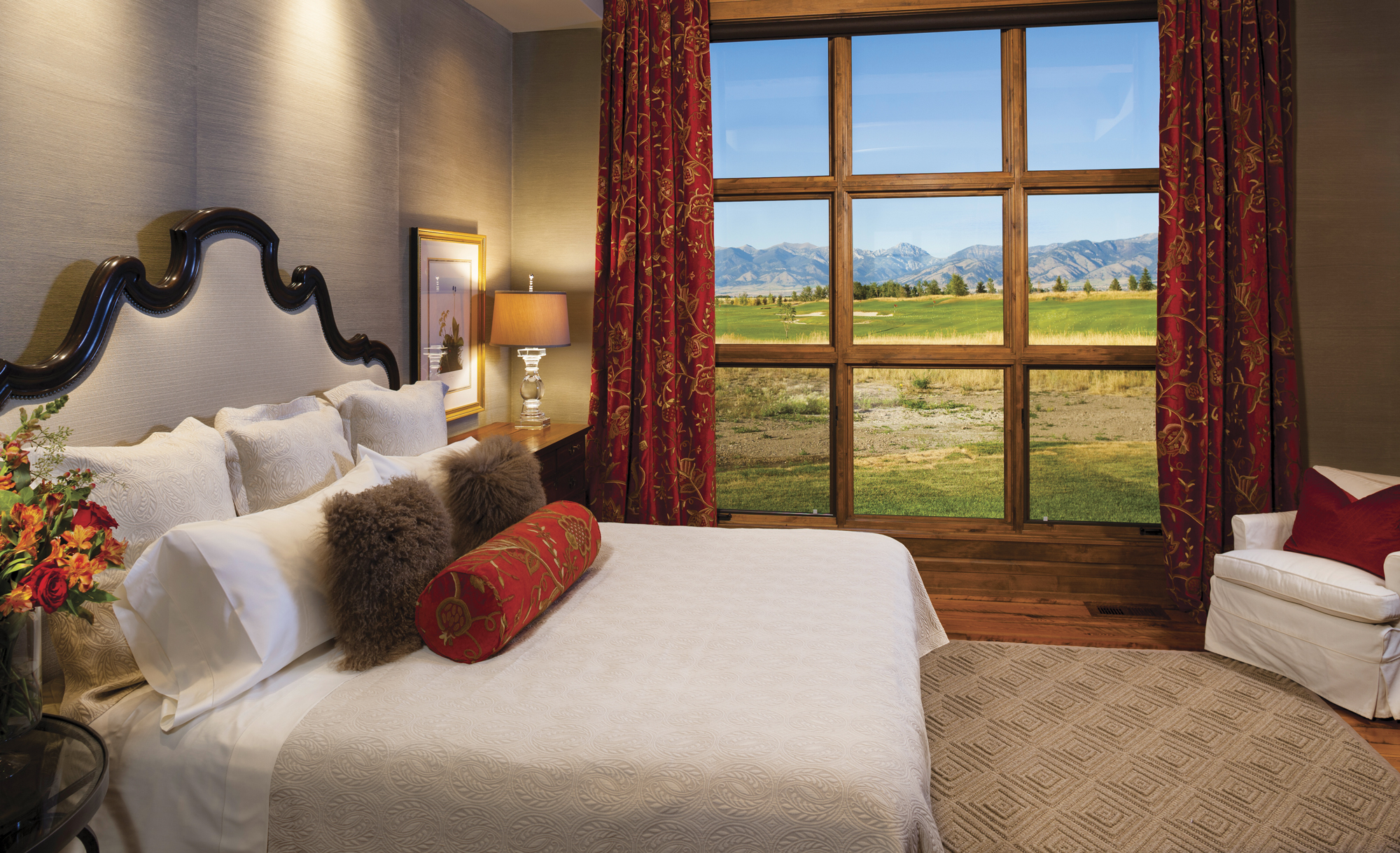 DOVETAIL CONSTRUCTION IS THE “REALIZATION OF A CHILDHOOD DREAM for founders and close friends Tim Rote and Kevin Sullivan, who met in kindergarten and built forts together in the woods while talking of dump trucks and plywood. They knew at an early age that they wanted two things: to live in the mountains and to build.

“(Kevin’s) father was a builder, so we’ve been in construction for all of our lives, and we’ve always wanted to do what we were doing now,” Rote said.

After earning engineering and construction management degrees and parting ways to work on major projects such as skyscrapers and bridges in places as far off as Alaska and New York City, the pair returned to Bozeman, Mont., to start Dovetail Construction in 2005. Their work is the outcome of a lifelong dream, and it shows in the finished product.

What started four years ago and tumbled into an accumulation of hundreds of photographs and cherry-picked design elements, has now manifested itself as a beautiful, 4,158 square-feet home for the Hodapp family. The home strikes a balance between the rustic tradition of mountain homes, with exposed timber and a large stone fireplace, and the contemporary, with beaming storefront windows and industrial steel elements, for a modern take on Western design. The four bedroom and four-and-a-half-bath house is interesting because of this contrast, because of its sophisticated nod to the rustic.

Sue Hodapp, from St. Louis, Missouri, was introduced to “The Last Best Place” in 2008 when she and her son Jack volunteered on the Blackfeet Reservation near Glacier National Park. She returned with her husband Jim a few months later to look at real estate. Eventually they decided on Black Bull because “the amenities are right here, we have a pool, a beautiful workout center, and Jim can walk out the back door and go to the driving range,” Sue said. The lure of skiing for their two sons Jack, 19, and Andy, 16, in Big Sky and the proximity to Bozeman were additional contributing factors.

The Hodapps called Dovetail Construction after they saw a house they built on Bozeman’s south side.

“I think they appreciated very much the quality of the timber work, the masonry, the stone elements and that the house had a bit of a Western contemporary feel to it as well. It wasn’t your typical old rustic, there was a little diversity to it,” Rote said.

“No slate in the entire house, that was Sue’s one request,” Jim said. “And that our home was not ‘Bozeman brown.’”

In the Hodapp’s home, a crystal chandelier hangs as the perfect glimmering accent in the master bathroom and fits as easily and succinctly as the antler chandelier that hangs above the dining room table. In part because of the influence of Cathy McNally of McNally Interiors and Design, nothing about this contrast feels out of place, because there isa continuity to the design and theme of the home for a smooth merger of contemporary elements in a traditional Western home.From the foyer, an earthy stone fireplace acts as the focal point, and is open to both the living room and the library. In the open kitchen the contrast of rustic and contemporary is showcased. Shannon Lundgren from Bridger Kitchens designed the sleek kitchen and bath cabinetry and was instrumental in selecting, tile and granite, all essential components that embed personal elements throughout the home. There are subtle industrial accents, such as the steel staircase railing and the large storefront windows that stretch across the living room, master bedroom and library, allowing for a wide view of Black Bull golf course and distant Bridger Mountains. The windows create a clean, streamlined element to the home’s design and light becomes a central component. With expansive views, the outdoors never feel far off.

“The industrial accents are extra subtle, and it’s a lot of fun as a builder to incorporate something that’s out of the norm, because it gives our craftsmen something fun and unique to do to show off their skills,” Rote said.

The timber that frames the living room, comes from old-growth trees that have dried and twisted over time. Despite these changes, the joinery between the beams is still seamless, creating an organic feel that is void of 90-degree angles.

The exterior of the home is plywood stained with different earthy colors to give it texture and tie the home to the landscape and the Bridger Mountains, said Brechbuhler.

“What I think is important in my designs, is that the house sits really calmly on the landscape; it’s not something that jumps out too much. It just has lots of nice details, but isn’t too much in your face. It just kind of sits appropriately,” he said.

The clean, contemporary lines found in the Hodapps’ home encourage a sense of simplicity; a natural compliment for the traditional, more organic elements found in a western home. Add stunning views of the

Bridger Mountains and the Spanish Peaks, and top it off with only having to walk a little over 400 yards to the driving range, and the Hodapps will be the first to tell you that the finished product is a dream come true for them as well. 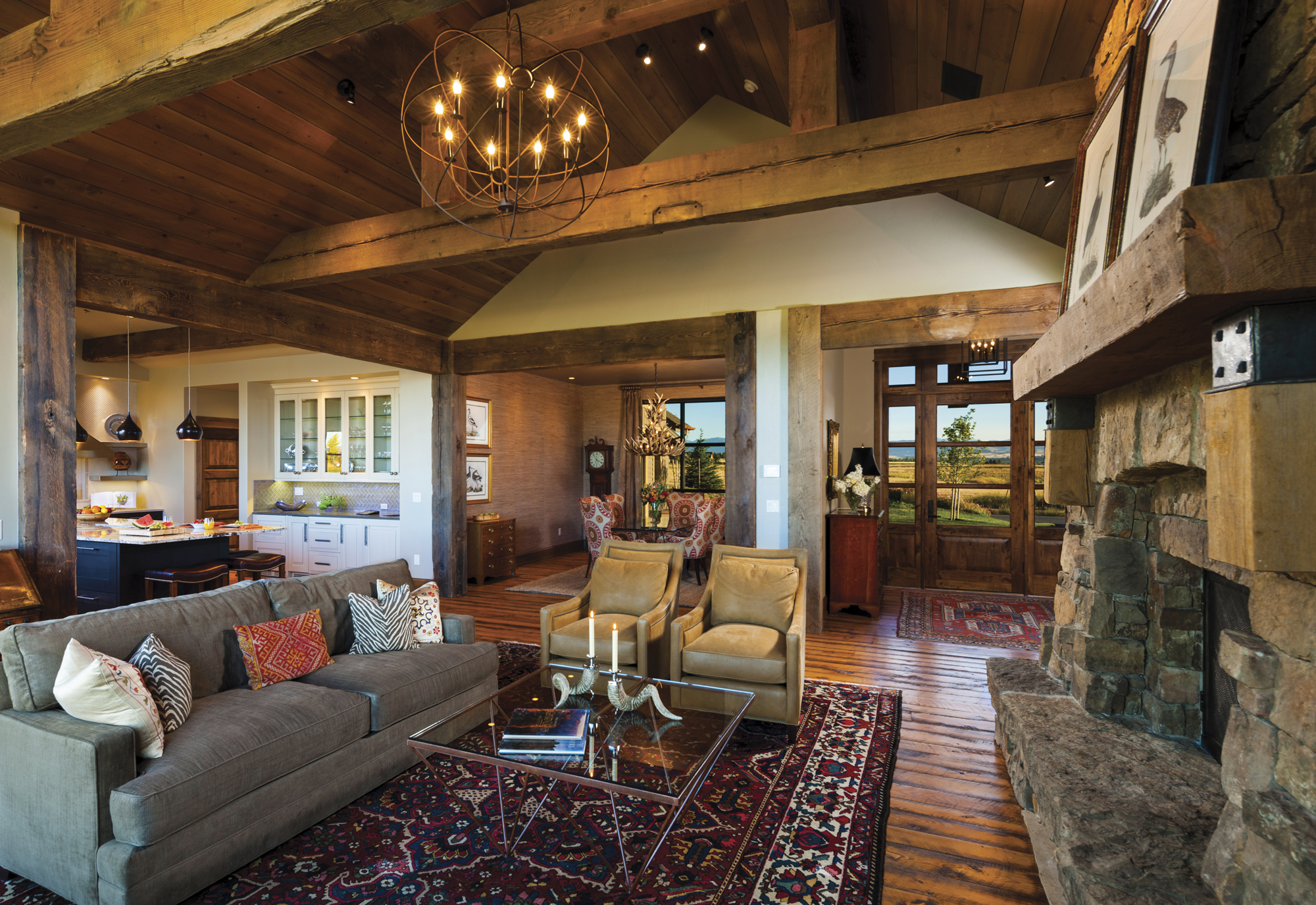 Visible from the front door, the living room is warm and inviting, with a large stone fireplace and storefront windows that offer vistas of the distant Spanish Peaks. Sue Hodapp was also easily able to incorporate furniture, such as the English breakfast 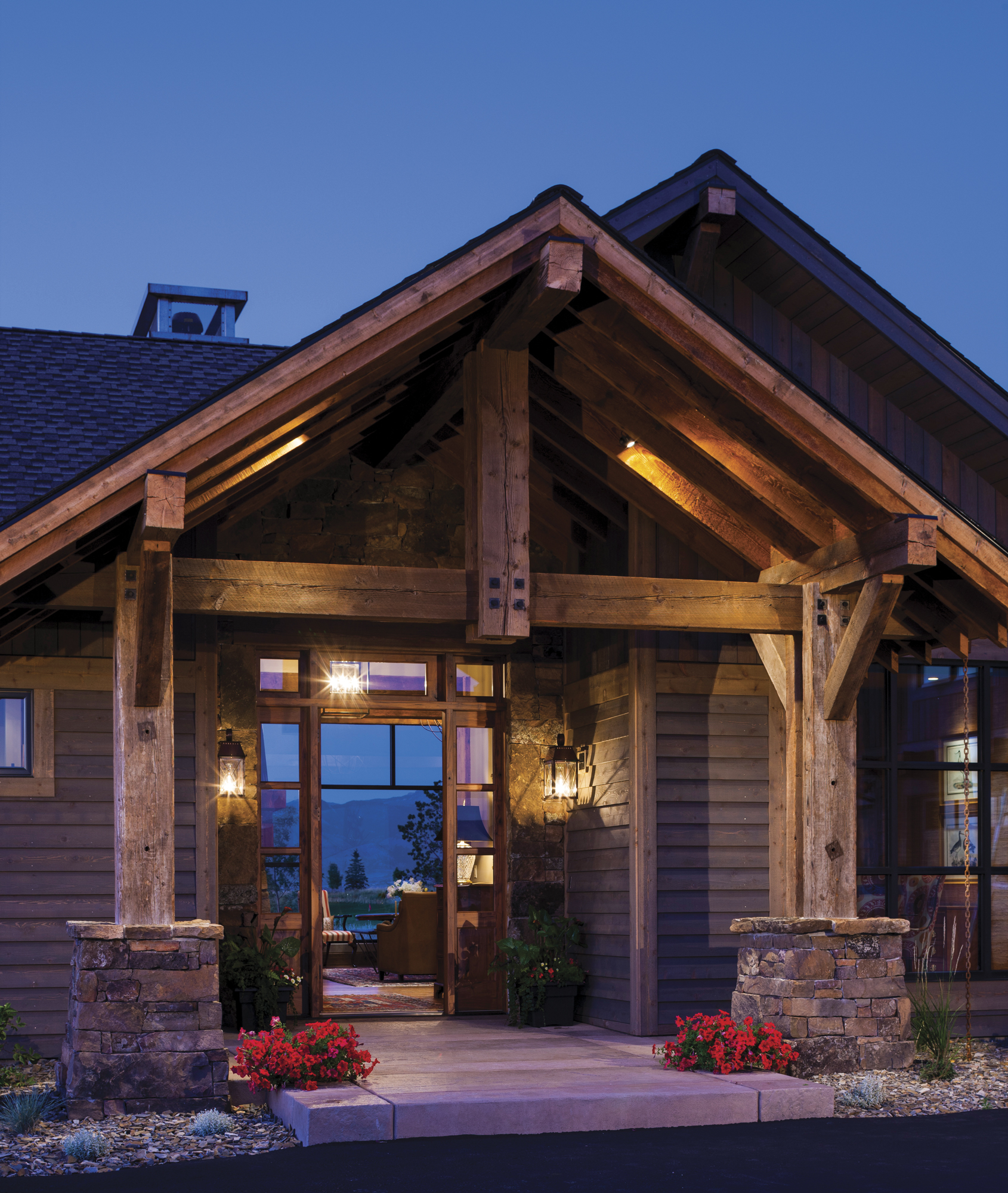 The home’s exterior was designed to blend into the surrounding landscape with neutral colors and timber and stone. 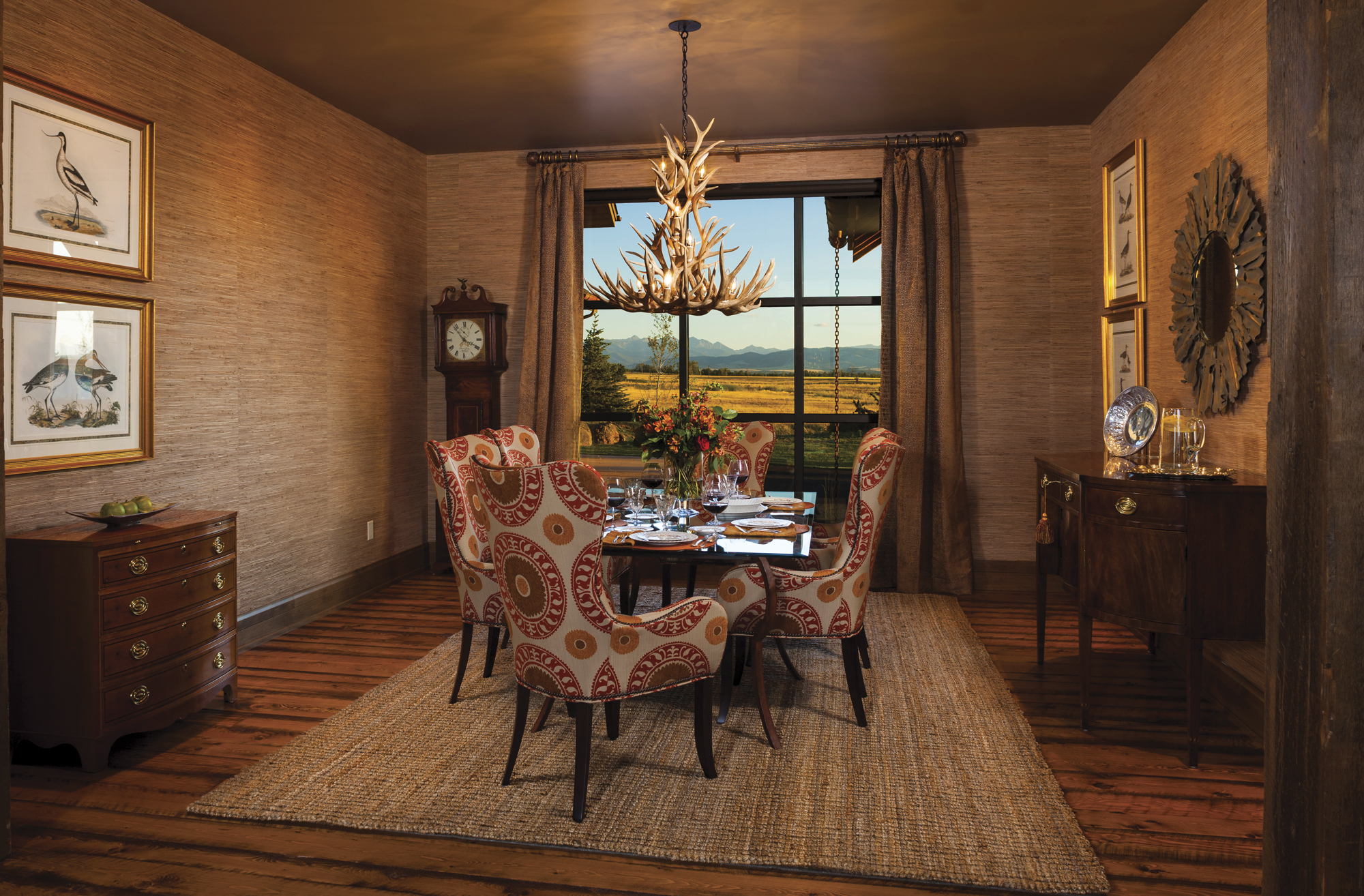 The walls in the dining room are covered with grasscloth, a fine cloth made from woven plant fibers, for a high-end rustic appeal. And, as the open floor plan of the home allows visible access to the living room, “no matter where you sit from the table, everybody has a view of the mountains from their chair,” said Jim Hodapp. 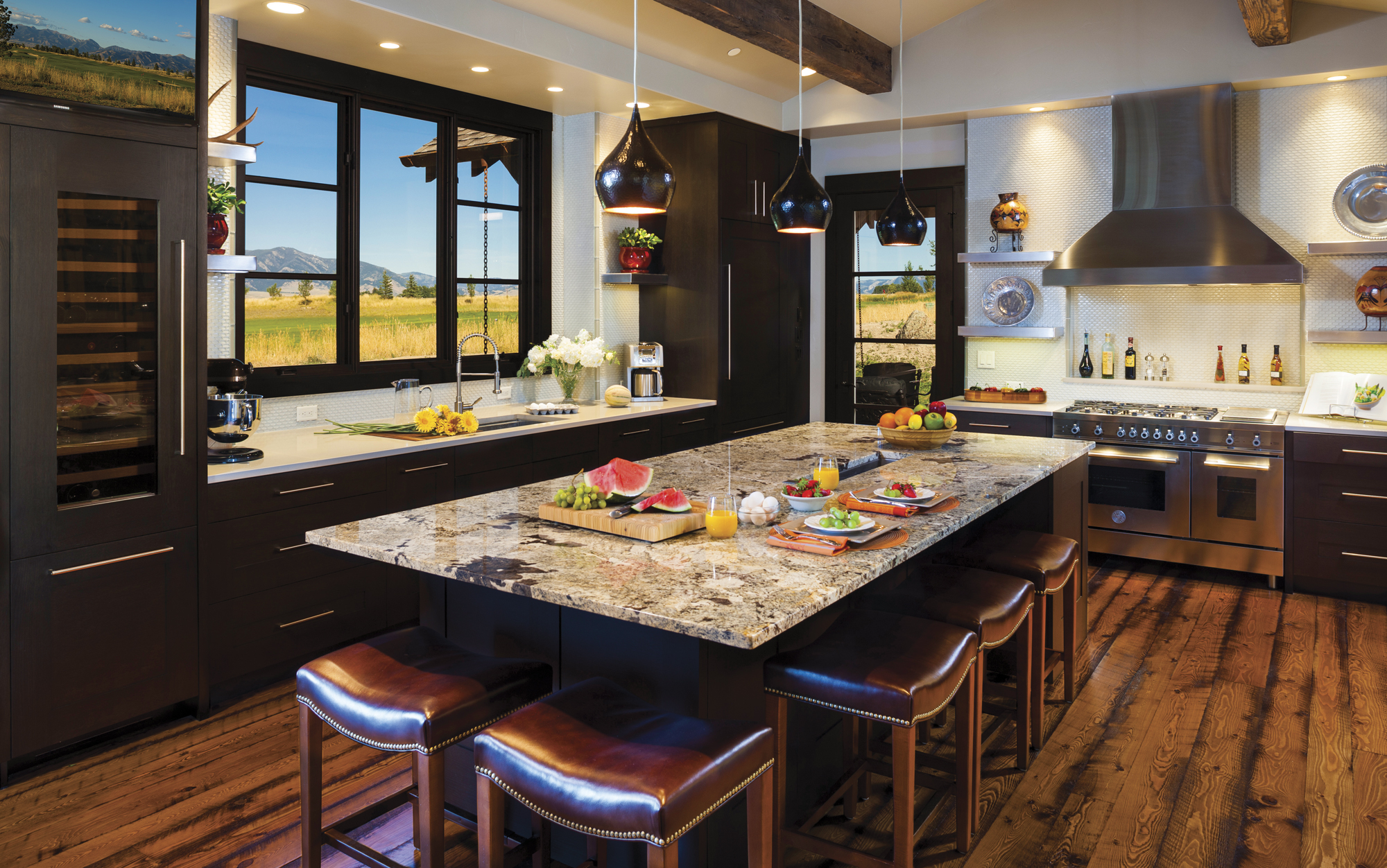 The kitchen makes its own full stylistic statement with modern clean lines. Shannon Lundgren, from Bridger Kitchens, was instrumental in the design of the bath and kitchen cabinetry as well as tile and granite selections, Sue Hodapp said. 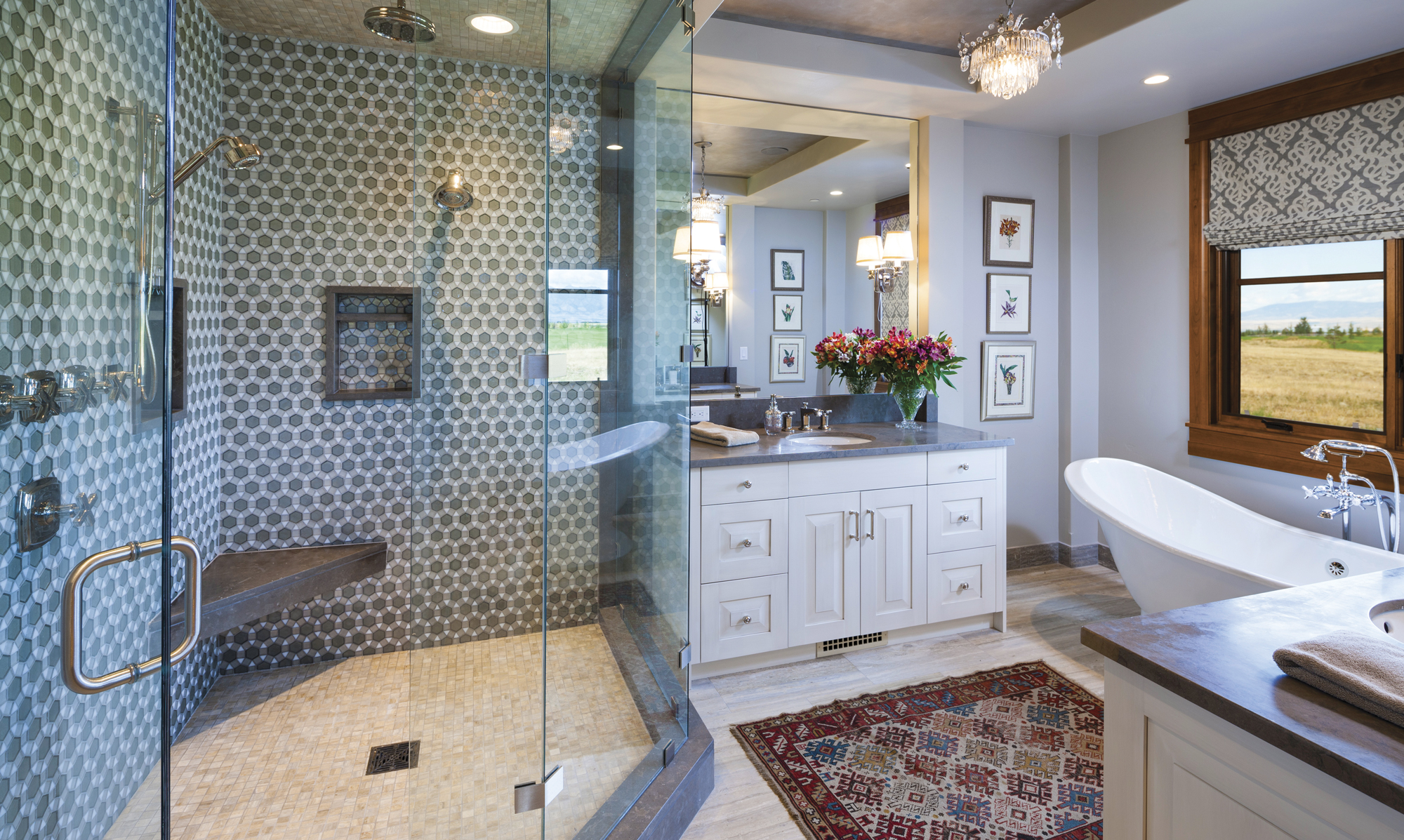 Eschewing rustic all together, in the master bath, the geometrical tile, glass and crisp finishes create a modern elegance.