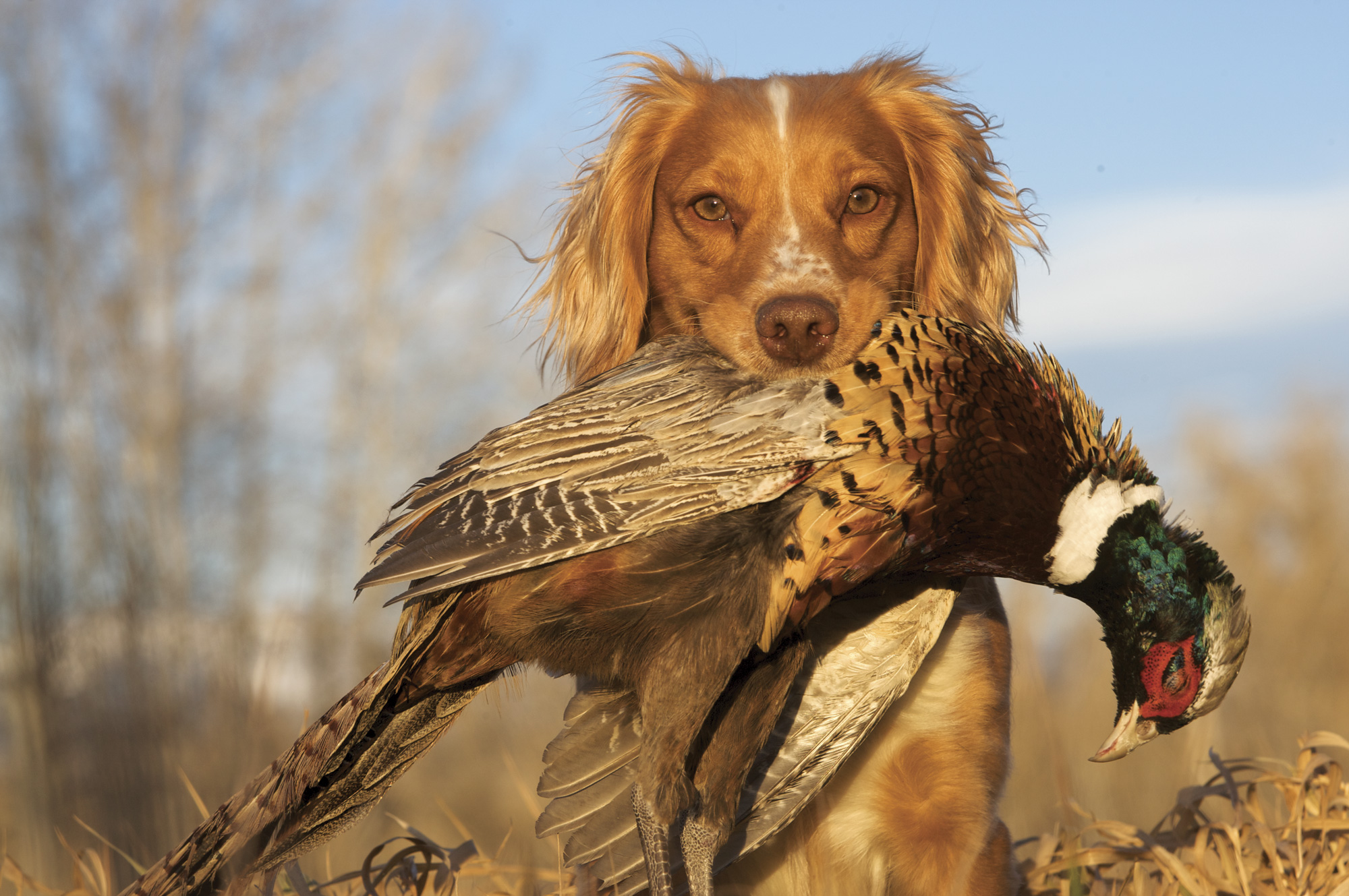 THOUGH IT’S EARLY NOVEMBER, I had the season’s first hunting dream last night — a nightmare, really — in which I couldn’t hit innumerable flushed pheasants though they hung on kite strings, reined in by a buddy, barely moving targets. I awoke disquieted and reminded of last season’s ample misses, quite certain that the only saving grace of a failed wing-shot is that the “miss-er” gets to watch the regal “missed” fly further and further into the boundless sky.

Late last November my hunting partner Brent and I were discussing tough shots and wily mid-season birds while following his three valiant setters down a ditch line in Montana. I had asserted that my upland shooting slumps typically began after a few weeks of rifle hunting, the stationary nature of that type of hunting. I felt pretty good about the previous day’s shooting, that I hadn’t missed a bird, but Brent looked back with a little more detail: “But you missed two of those birds on your first shots.” Before I could process my perfectionist friend’s factoid, I saw Red receive an urgent call from some scent cones in the uncut barley and lock up 30 yards away. I shuffled up to the rigid dog while Brent “whoaed” Blue and Pearl.

“If he goes left,” Brent whispered, “you take him. If he goes right, I got him.”

From my vantage, the cock flew straight away, and fast. I shot too soon, my pattern barely big enough to cover a can of corn, and missed, and fired a second shot just as Brent’s first load of 7 ½s hit the bird and hung it momentarily against the cirrus-streaked sky. My shot string gave the already dead bird an unpleasant jolt just before it fell hard from its apex.

“You hit him with that second shot,” Brent said, which was his way of encouraging me but also reminding me that the bird was, thanks to me, more suited to stewing now than roasting.

I slumped against a fence post and shook my head, while the others admired the retrieved bird’s plumage.

“So what,” Brent said. “You missed a bird. What are you going to do, write a poem about it?”

Perhaps, I thought, now starkly reminded that I am a writer who occasionally hunts while Brent is a true predator. Angst is good for the writer, not so for hunter who, like any true predator, moves on to the next quarry. The predator tells himself: Next time, take a deep breath, watch the foreground, be unstartled by the flush which often seems like a many-feathered weed-whacker bursting into the sky, focus on the beak, and remember that the shot is always quicker than the bird.

True predators, of course, are as rare in the hunting world as they are in the wilds. Some days a single missed shot can mire the weekend warrior in a funk. I’ve watched one good friend shoot, over the course of a few weeks, 15 upland birds in a row then proceed to miss, in one morning’s hunt, four of the easiest shots of his life. The first shot was a 20-yard crossing shot, such a standard make for him that missing it made him wrongly rethink everything he’d done correctly in the preceding weeks. “Some birds are just bulletproof,” Brent says, meaning you have to walk away from unscathed birds as unscathed as they’ve flown away from you.

Easier said, of course, than done.

I had endured a rough day of shooting after missing that first bird in the barley, and I was attempting later that evening to scrub my memory clean with a steel wool pad made of stiff vodka-sodas served by my favorite Hi-Line bartender. In the back of the large barroom, four men were lined up — one pair at each end of the room — beside boxes fashioned by 4-by-4s, tossing large steel washers from box to box. Moseying toward the game, I saw that they looked to be playing some kind of contained game of horseshoes, except that their horseshoes were washers aimed not at a steel pole but into the center of a 3-inch-high piece of PVC piping fixed at the center of each box.

Tossed by a tall man dressed in wool coveralls, one of the washers rattled into the PVC circle, garnering celebration from two teammates and moans from the other.

“What do you call this game?” I asked.

“Washers,” said one of the men.

I felt too dim to ask another question so I just stood there quietly sipping at my drink. The guy must have sensed my embarrassment at his deadpan because he offered: “One point for a washer in the box, two for a leaner, four for a washer in the pipe, and if you get a washer to land on the rail, that’s a Pig’s Ass and you win the game.”

“You want in the next game?”

“Sure,” I said, and proceeded to buy beers for the players and procure a partner.

Our tosses landing alternately a few inches shy of or beyond the box, Brent and I lost the first game handily, but we caught on as our cocktails caught up with us, and eventually dethroned the home-team, and held court against several well-oiled challengers. Patrons ambled over from the bar to cheer us on and razz their friends for losing to some tourists. Thoroughly zoned-in, my mental-mantra went something like: Bend the knees, swing the arm, make the shot. Not that I was going to embark on any Pro-Circuit Washers Tour, but it was a Saturday night on the Hi-Line and I felt pretty good surrounded by my newfound fans, sinking shot after PVC-rattling shot. Once, after an impressive flurry of makes that brought Brent and me back from the brink of elimination, I even gave our supporters (all five of them) one of those Michael Jordan-esque shrugs that says: I have no idea where this is coming from

Am I the only wing shooter who shoots a little better when he’s hung over? Perhaps because I was born with what often seems like caffeinated blood, and because I don’t hunt frequently enough to make the pursuit of wild game birds routine, my excitement is often my own worst enemy when it comes to felling pheasants. However, when my nerves are a bit bedraggled from the prior night’s festivities, my surroundings attain a kind of elasticity: I seem to startle less at the flush, to come more casually, assuredly, to the shot, and to swing the gun more naturally, tracing the arc of each bird.

The morning following our unprecedented run on the washer’s court, the first bird of the day flushed south, gaudy and high with a coulee bank for a backdrop: a tough shot to miss and so I didn’t. Take your time, I had said to myself as the rooster launched out of the CRP and I moved the white bead at the end of the 20-bore with the white ring around the bird’s neck. This nerve-easing utterance, Take your time, is not unlike the God-save-the-Queen that British anglers often whisper to themselves, to calm their jitters, when a trout slowly sips in an offering, before burying the steel.

As I knelt to pick up the rooster and slid it into my game pouch, a second rooster, two gun lengths away, burst out of the uncut grain. I had breached my gun but failed to replace the ejected cartridge. Normally, such a situation would have turned me into an Elmer Fudd look-alike, but my subdued nerves allowed my instincts to take over, close the Browning, switch barrels, click off the safety, and make a fairly long shot. As the bird dropped out of the sky, I could almost hear myself saying, as I had while playing washers the night before, Bend the knees, swing the arm, make the shot. Within an hour, I would fire my third shell and dump my third pheasant, a very rare occurrence for this sportsman.

Was I in danger of becoming some cold-blooded upland assassin?

Hardly. Nor do I hope to become one. I want to give in to adrenaline, to be overcome by the sheer energy of a cockbird flushing out from under the boot’s laces — such an intimate connection to wildness is one of the chief reasons to hunt. I’m not even hoping to become a great wing shot, merely a more serviceable one. Last season, with this meager goal in mind, I analyzed some of the better shooters I know, often lagging well behind them and the birdy dogs so as to watch from a distance what particular techniques led to success.

Sure, a fluid transition from walking to gun-mounting seemed important, as did a gun barrel that swung instead of poked at its target, but what I concluded from hours of viewing was much more tactical than technical: those who hunted well, shot well. By “hunted well,” I mean that they kept up with their dogs; they worked fields to the fence lines or to the end of the cover; they spoke quietly when they spoke at all; and without fail, when they stopped walking, they stopped with their left foot in front of their right foot, the ready position for any right-hander. In short, the hunters who shot well helped their dogs provide them with easier, more make-able shots.

After regarding good shooters for a few weeks, did my shooting improve? The statistics were — how shall I say it? — inconclusive. Regardless, it is troublesome to reduce a hunt to the birds one has managed to fit into his game bag (though such is the materialism of hunters). The misses, those equally important and soul-nourishing blunders, sometimes leave a more indelible, if amusing, impression on this hunter’s mind. And so, in defense of misses, I leave record of my most memorable from last year: The yearling setter Blue had, in some mangy ditch cover, stuck a dynamo of a point toward which I walked with supreme confidence just before I tripped on a tractor-tire rut and fell on my back as the rooster flushed, rusty breast lit by the rising sun, and cackling a mere 10 feet above my head before it disappeared over a rise.

The bird did not defecate on me, but had it chosen to, I’m sure Blue would have thought the bumbling hunter quite deserving. 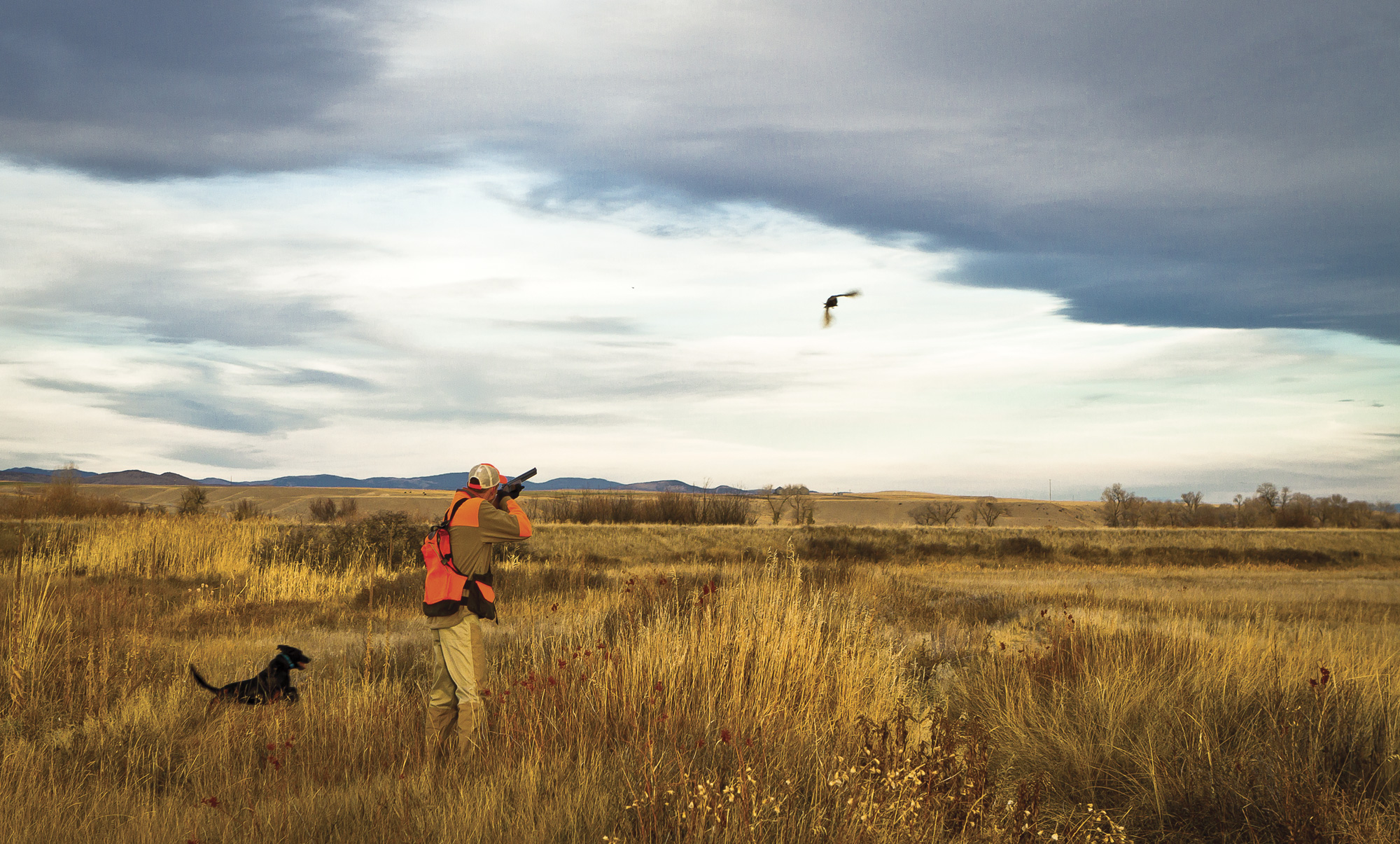 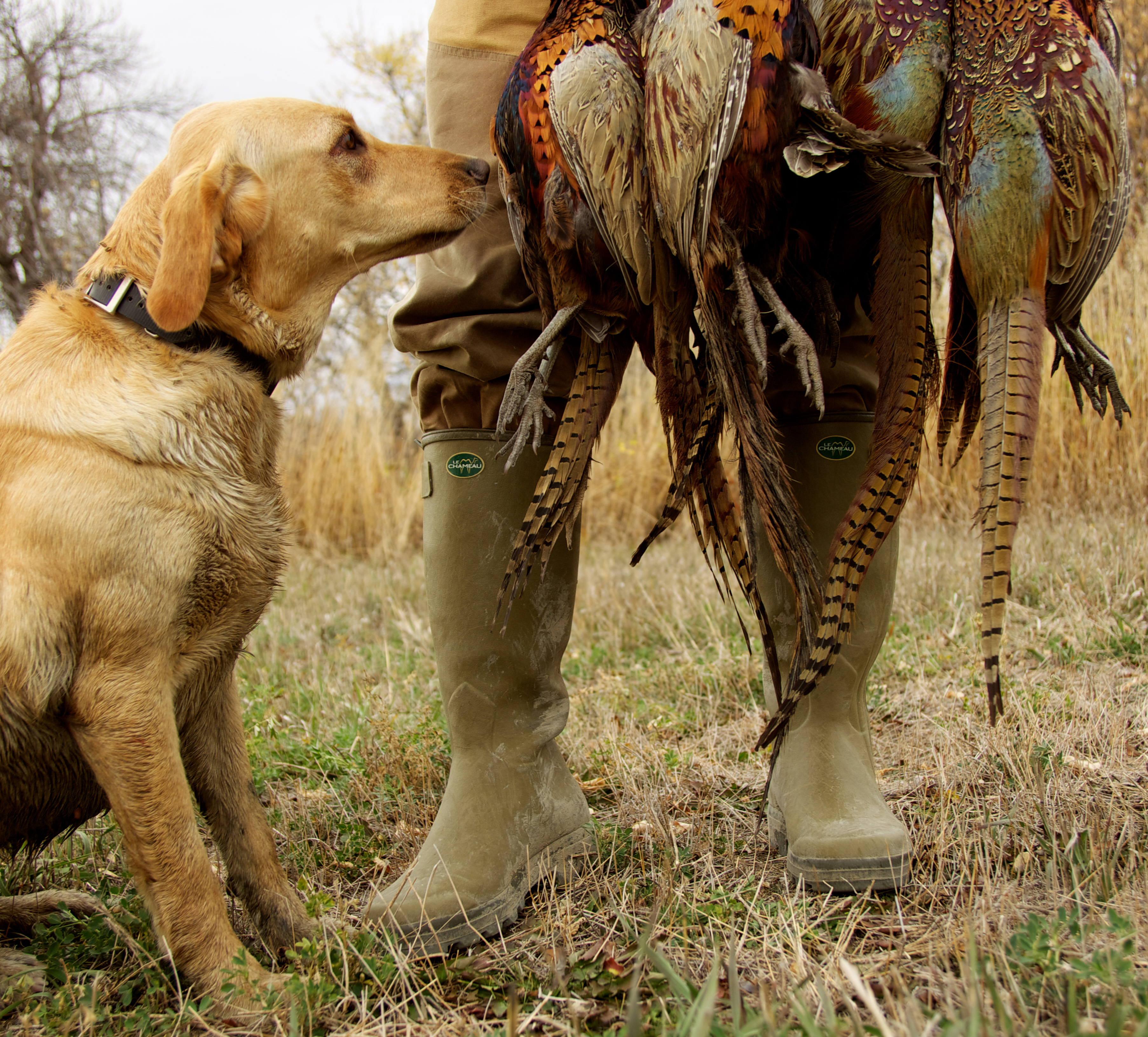 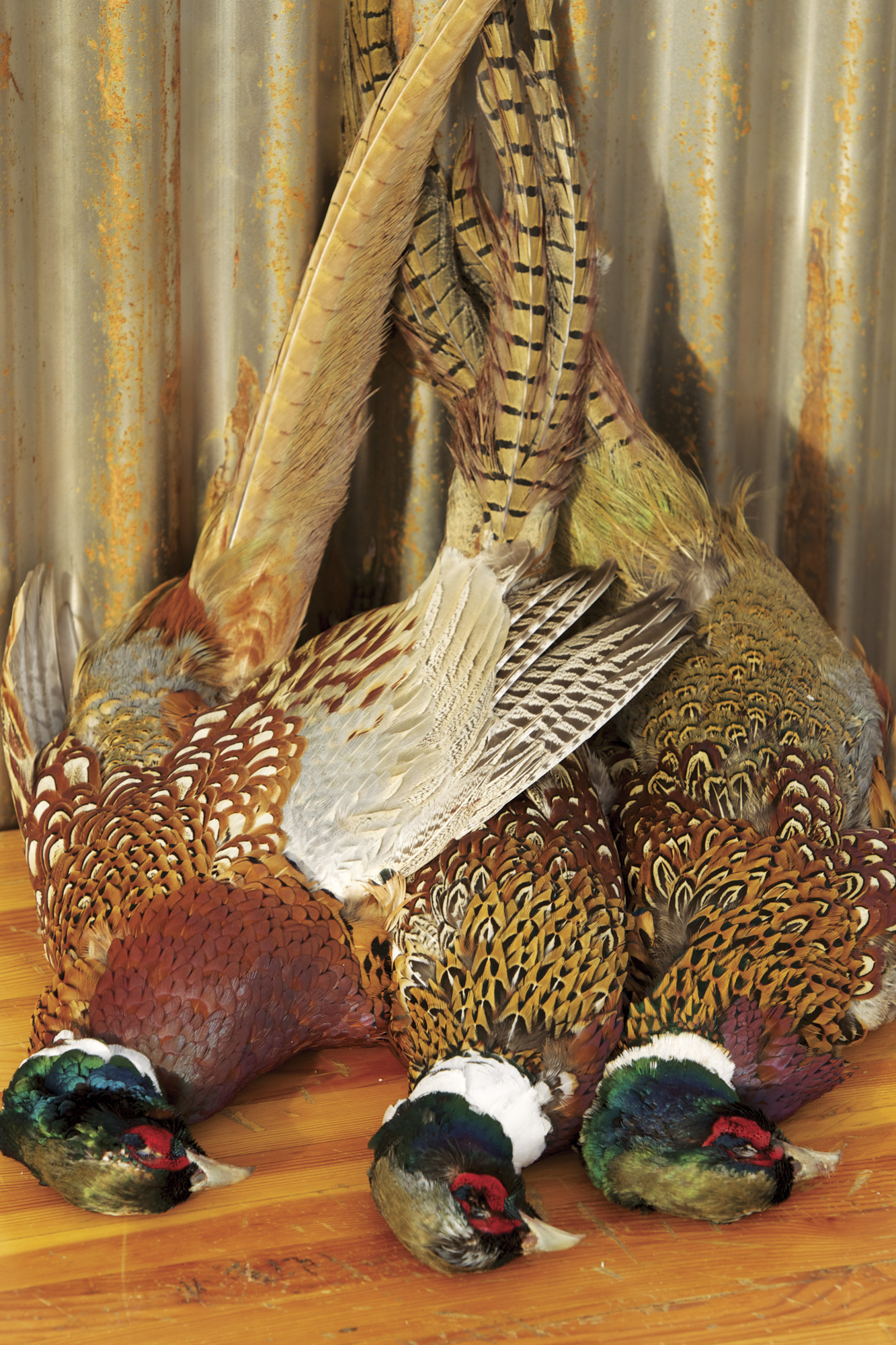