Mind you, dying in an attempt to hike a 2,500-mile circumnavigation of the state of Idaho wouldn’t be the worst outcome, according to Jim Fulmis, who prefers to be known as Yeti.

“It’s my intent to die on the trail, doing what I love,” Yeti proclaims. “And I hope people will have the good sense to just leave me there.”

Now 79, Yeti continues his passionate lifestyle of long-distance, lightweight hiking expeditions, still averaging around 25 miles a day, and has no intention of giving it up.

The fact that he is still at it is a singular testament to luck, fortitude, and stubborn will. His quest to lasso the borders of Idaho on foot is the latest in a long list of hiking accomplishments. It also may be the most notable given the litany of setbacks he overcame along the way. 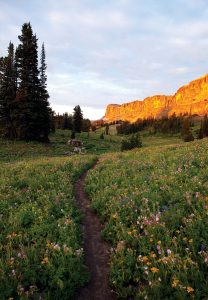 Here’s the snapshot. On his first attempt in 2012, he was hammered by repeated bouts of severe sunstroke before having to give up after several hundred miles. “I was literally boiling my brains,” he reports. In 2013, he made it more than 1,700 miles around the state before falling while hiking after dark, and suffering a severe concussion. He had to wobble out some 15 miles, vomiting all the way, to a road where someone picked him up and took him to a hospital. In 2014, he made another attempt, but ruptured a disc in his back and had to quit. In 2016, he finally completed the circumnavigation with his partner, Melanie Simmerman, but suffered several heart attacks along the way, and had to take breaks for surgery and convalescence en route.

At some point, one of the heart surgeons suggested that he might find a calling more suitable to his age. “I fired that guy,” says Yeti. “What did he think, that I would take up lawn bowling?”

Yeti has lived in Belgrade, Montana, since 2008, where he has become something of a fixture, known for his penchant for marathon dancing, his habit of wearing shorts year round, and for the stories from his legendary hiking resume.

He spent much of his life in California, where he was born. While he was growing up, his family moved to Oregon, and then to a farm in Iowa; but wherever he lived, he was roaming the hills and forests, often with his sister.

As an adult, his professional gig was as a sound engineer in the motion picture business. “Time off was always the first part of any work negotiation,” he says. “And good health insurance.” 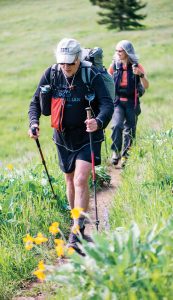 Yeti is one of those people whose identity is based more on his avocation than his vocation. If you ask him what he’s done, he will roll out a list of trails, not work accomplishments.

He claims to have some 32,000 miles under his boots, and he’s still counting. That includes 22 circuits on the John Muir Trail, and a catalog of the usual long-distance suspects like the Continental Divide and Pacific Crest trails. He met Simmerman along the Continental Divide in Colorado. They hiked together up into Wyoming and bonded, eventually moved in together in Belgrade, and later got married. Simmerman, a relative youngster at 63, is a long-distance veteran in her own right with an impressive list of trail credits, route documentation, and guidebooks to her name.

Like many long-distance hikers, Yeti has hiked alone for most of his life. Once in a while he found a companion to hike with for a while, but it’s a rare luxury to find a partner with the same obsession who becomes a consistent trail mate.

Like most lightweight devotees, Yeti worked his way into the genre from the old, traditional heavy-pack tradition, gradually whittling away pounds, finding lighter options, developing a lifestyle around minimizing gear and making miles. His formula makes it possible to travel fast enough to complete continent-spanning routes in a single hiking season, rather than breaking trails into segments to be completed over several seasons.

“It is all about the miles,” he says. “It gets very psychological. You get obsessed with making the miles — 25 or 30 every day. It eats at you until you get them done. Every decision is based on that.” 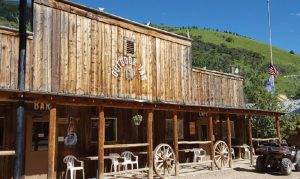 His pack, these days, without water and food, weighs in between 15 and 20 pounds. He uses an alcohol stove, buys simple food along the way, uses bleach to purify water, and eschews luxuries like puff coats and camp seats.

Practicality rules the day. Substitute the engine additive Heat for stove fuel, and avoid having to find an outdoor store for canisters. Pick up some ramen and a flavor pouch at a roadside gas station for dinner. Don’t screw around at stream crossings looking for a log or a route across on rocks, just slog through — you can waste an hour farting around, taking off shoes, and looking for dry crossings. A drop of bleach suffices for water purification, from streams to stock tanks. Start at dawn and hike till dusk, or until you’ve got your miles. Pound some high fat food like Reese’s peanut butter cups. Sleep. Do it again.

“You simply cannot get enough calories,” Yeti says. “I remember once hiking the Pacific Crest and stopping at Timberline Lodge for the breakfast buffet. I ate 14 pancakes and two heaping plates of eggs and bacon. Then I kept hiking. You just have to fuel up whenever you can. 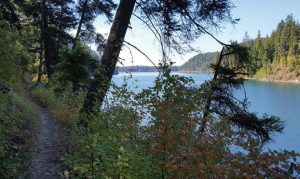 “It’s absolutely addictive,” says Yeti of his hiking lifestyle. “I get depressed after I finish, immediately start planning for the next one.”

This is not a pursuit for the faint of heart. You will get hurt doing it, and it will try you mentally. Yeti’s career is dotted with falls, heart attacks, neck-deep stream crossings pushing a homemade raft with his pack in front of him, knee replacement surgery, terrifying storms, toenails that fall off, months of giardia, deep snow, and deeper loneliness. He once fell in the Cascades, badly injuring his knee, but had to hike in agony for more than 100 miles before he could exit and arrange for knee replacement surgery.

Eventually, for folks like Yeti, the standard routes become blasé and too populated. As his hiking credits built up, Yeti gravitated toward putting in new routes rather than following a tread described in guidebooks and crowded with other hikers. 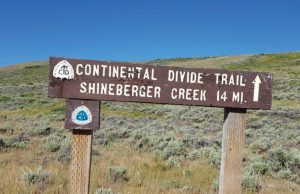 The Idaho hike is a classic example. The idea came from a friend, Mike O’Brien, in Boise. O’Brien, himself 72 at the time, was looking for Yeti to help with the GPS mapping of the route. Much of the “trail” is a cobbled-together conglomeration of logging roads, unmaintained trails, bushwhacks, and back roads. Yeti was intrigued and agreed to “fly” the trail virtually to start putting it together.

“We use maps,” he stresses, “but there is no way you could pull off this route with maps alone. It’s just too hard to know where you are, and so many things aren’t where the maps say.”

Even with the help of GPS technology, the Idaho Boundary Trail pioneered by O’Brien (who Yeti refers to as “The Kid”), is a mishmash of discovery and surprise. Yeti remembers miles of impenetrable blowdown he had to clamber through, trails marked on maps that didn’t exist, shortcuts that turned into epic slogs, 30-mile endurance stints through the deserts of Eastern Oregon between water holes. There were steep scrambles up scree slopes, days with dozens of pushy stream crossings, endless marathons along roadways, and maddening detours. 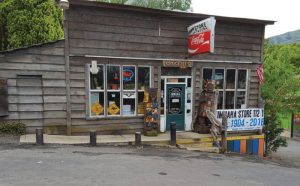 By the same token, surprising rewards along the way outweighed the trials. “Every time we saw a truck coming our way down the road, I’d say, ‘Here comes the beer delivery!’” Yeti laughs. “Almost always I was right.”

People in tiny towns were unfailingly friendly. Yeti and his cohorts were fed steak dinners, put up for the night, given trail advice, invited to parties. One of the highlights was spending a Fourth of July weekend in Paris, Idaho, that featured live music, all-night dancing marathons, and great people. “I’ve been back three times now,” Yeti says. “People show up just to watch me dance!”

Married with the most difficult trail sections are immersions in intense beauty: horizon-swallowing sunsets, nodding fields of columbine and fireweed, waterfalls in shaded canyons, face-to-face encounters with animals, days on end of empty country where civilization recedes and the exhilarating embrace of wilderness holds fast. 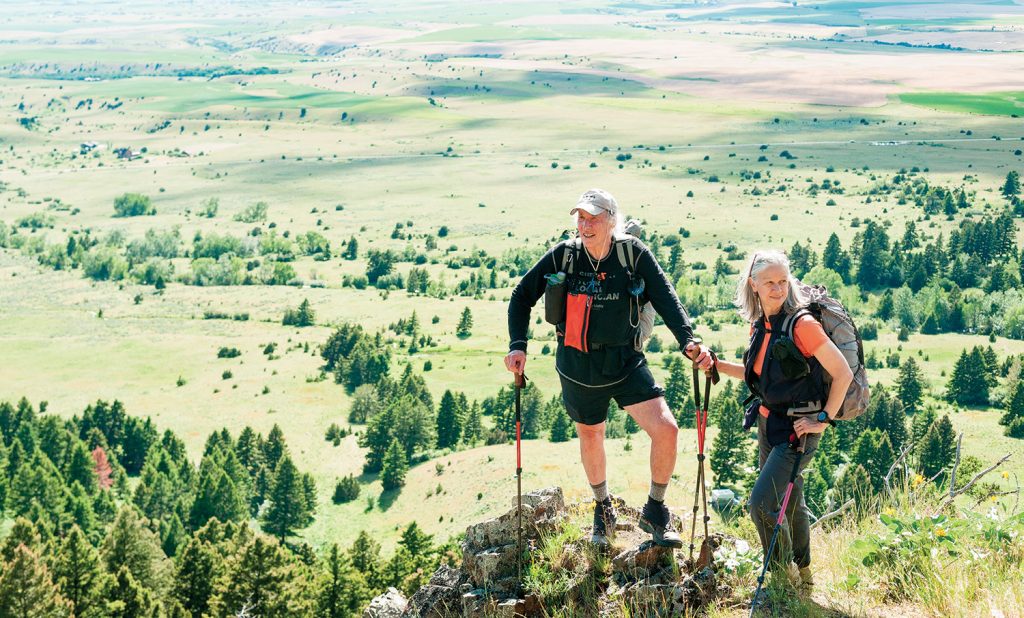 Yeti’s last push on the Idaho circuit began with Simmerman on May 18, 2016, in Clarkston, Idaho. Five days later, on top of Lookout Mountain, Yeti woke up barely able to breathe. He hiked out, hitched a ride, and returned home for heart surgery.  Once Yeti was stable, Simmerman returned to the hike. When he was able, Yeti came back in a supporting role, then slowly worked his way back into a hiking routine. By August he was able to join her full time in Salmon, Idaho, picking up where he’d been stopped by his concussion in 2013. 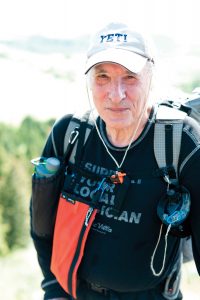 He had slowed down to a two-miles-per-hour pace, had to take pills to control fluid buildup. “I had to pee every two miles,” he says. “I told Mel that I was going to do that last 900 miles of trail or die trying. I managed, a little slower than usual, popping pills the whole way. No whining.”

Yeti has plans for more hikes as he closes in on his 80th birthday. He and Simmerman want to “clean up” a few sections of the Idaho trail. He has always been drawn to the Sea-to-Sea Trail, connecting the Atlantic and the Pacific oceans across the northern tier of the country.

For now, he is savoring the Idaho accomplishment and fine-tuning the route. “This is a trail made by the people who hike it,” he says. So far, that number is a group you can count on the fingers of one hand, just the sort of exclusive fraternity Yeti prefers.