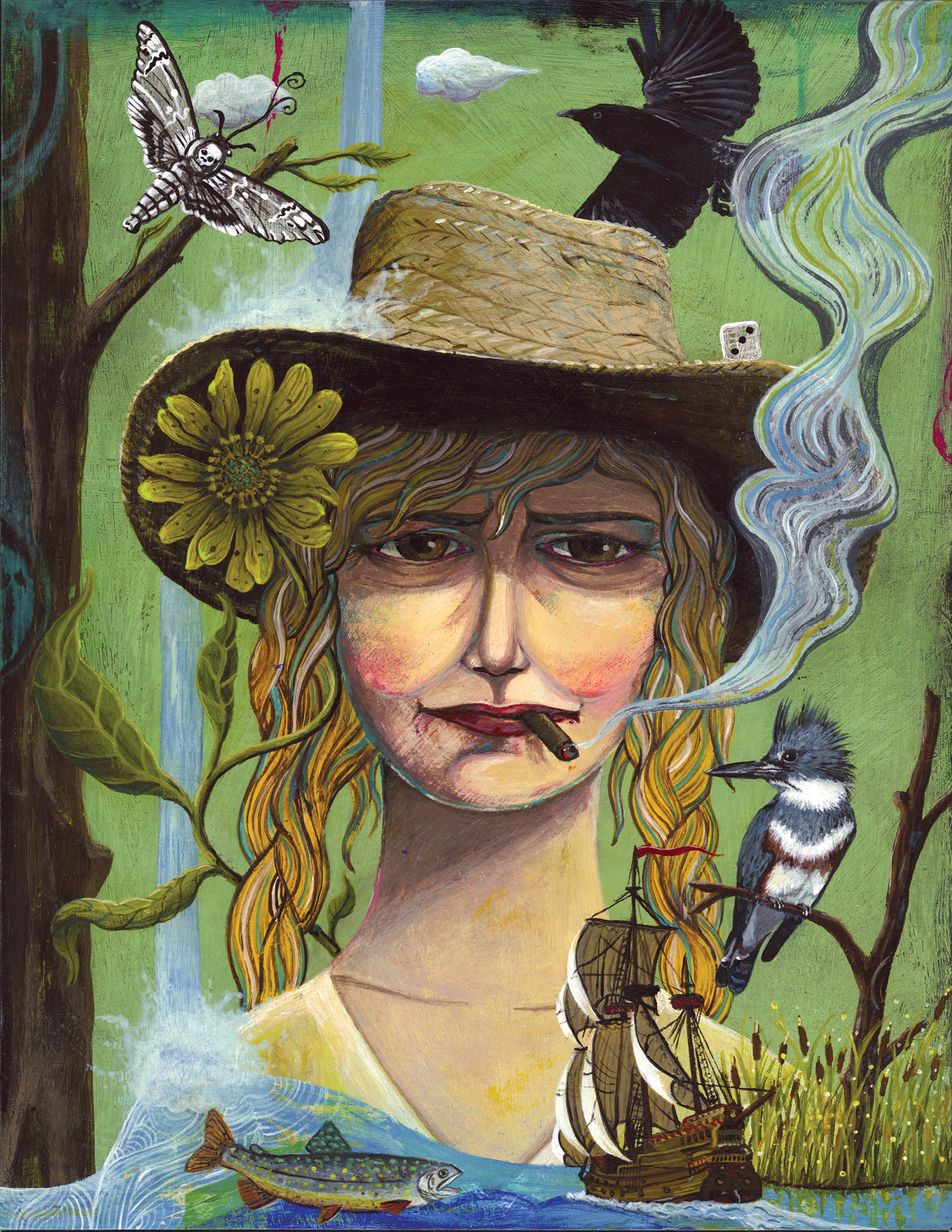 She pulled the lit cigar from her teeth and held it aloft as if raising the sacrament, smoke levitating to midday sun like the birth of wildfire in bone-dry grass. The sun was too high for fish to rise. The river cut a cool artery through the thirsty landscape.

“Made with tobacco leaves grown in Andhra Pradesh, air-cured in the eaves of a Carolina barn, cut with flecks of gold shaved from coins found in briny waters off Zanzibar, rolled by the hands of curanderas in Santo Domingo. My lungs, my words, filled with precious metal.”

I had merely requested her thoughts on the day. Another riverbank philosopher would not hold me captive. A crow flapped across the river. I turned to walk upstream.

“I can tell you things that come not through waking observation but in visions of the night; the crow flies before our nose once, twice. We do not see it. It is not until the bird makes a third pass through the sky of our sleep that we listen. I tell you: I have a theory.”

I paused my slow retreat. Yellowed vegetation along the banks rose and fluttered in a unified shimmer, then flattened with a shifting breeze. She now sat upon a nest of white mule’s ears, chewing the cigar while pulling line between her gnarled fingers, examining silvery monofilament as a silk merchant inspecting threads.

“Yes, about the Continental Divide. This place exists in limbo, water flowing east on one side and west just micromeasurements away, sitting momentarily on the highest neutral point before haplessly coursing one way or the other, to the Atlantic or Pacific. Which droplets run east? Which are destined west? The genetic makeup of water is a question best left to scientists and seers. The collision of thermals, percolation through soils, sands, basalt, evaporation across a planet of bodies moving and stagnant — that is how rivers come to be. The toss of dice, roll of runes, cracks in burned bones — this is how rivers come to be.”

But what was her purpose? From her vest, she pulled a maple case inlaid with shells. Her hand hovered over the selection within, expecting the correct feathered specimen to meet in the middle.

“There lived a man in Japan who studied intentions and water. He filled many glasses. For some, he played symphonies, to others he spoke of love; at the rest, he directed invectives, though cruelty was not in his nature.”

“He froze each sample and photographed the crystals. Delicate tessellations appeared in those shown kindness and beauty; the ones exposed to fury showed pockmarks and silhouettes of deep-sea monsters in their composition. Most called his experiments worthy of medieval alchemists. Perhaps they were, for he produced no statistics, no sine curves.”

I nodded. I believed nothing without a sine curve of sorts.

“Nevertheless, I do wonder about water that hits the earth upon the highest points before making its run. Through avalanche chutes, high lakes, mountain conduits tumbling past the roots of Douglas firs … perhaps the constitutions of stone, soil and wood imprint upon this blank slate before arriving here, to swirl about our clumsy, felted feet.”

“As we part the river with each step, do we change water with our intentions known and hidden? If so, how many joys and sorrows, demons and blessings, can one river hold? Or, are we changed by it? Does our makeup show perfect geometry after wading into currents known and unfamiliar? Perhaps with each stride into uncharted current an eddy of revised history whirls behind.”

Line rigged with a white moth, she stood.

“It’s the wrong time of day for that moth,” I objected, a quibbler perfectly bred.

“Soy hija del cielo, novia del aire y habitante de mi verdad,” she said. I am the daughter of the sky, mistress of the air and inhabitant of my truth.

She sauntered downstream, her long braids disappearing behind a knoll. The crow flew overhead, heading downstream with her. The woman was clearly of unsound mind. However, I do recall with each wake made in crossing, the vulnerability of water.