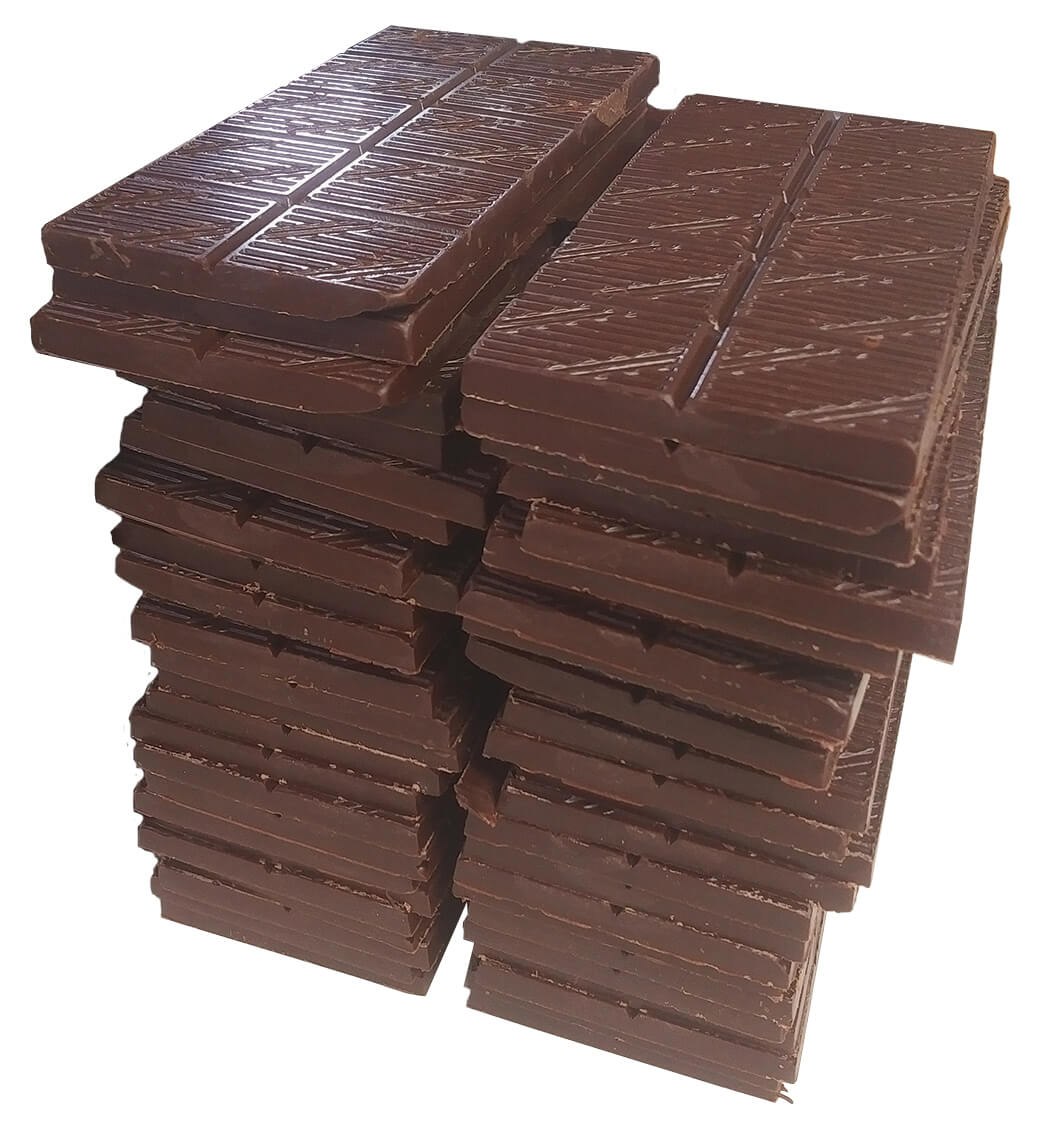 Jennifer Wicks places two bars of chocolate in front of me and my 14-year-old daughter Tessa. “These are each made with the same recipe of 72 percent cacao and 28 percent sugar,” she tells us. “See if you can tell the difference.” 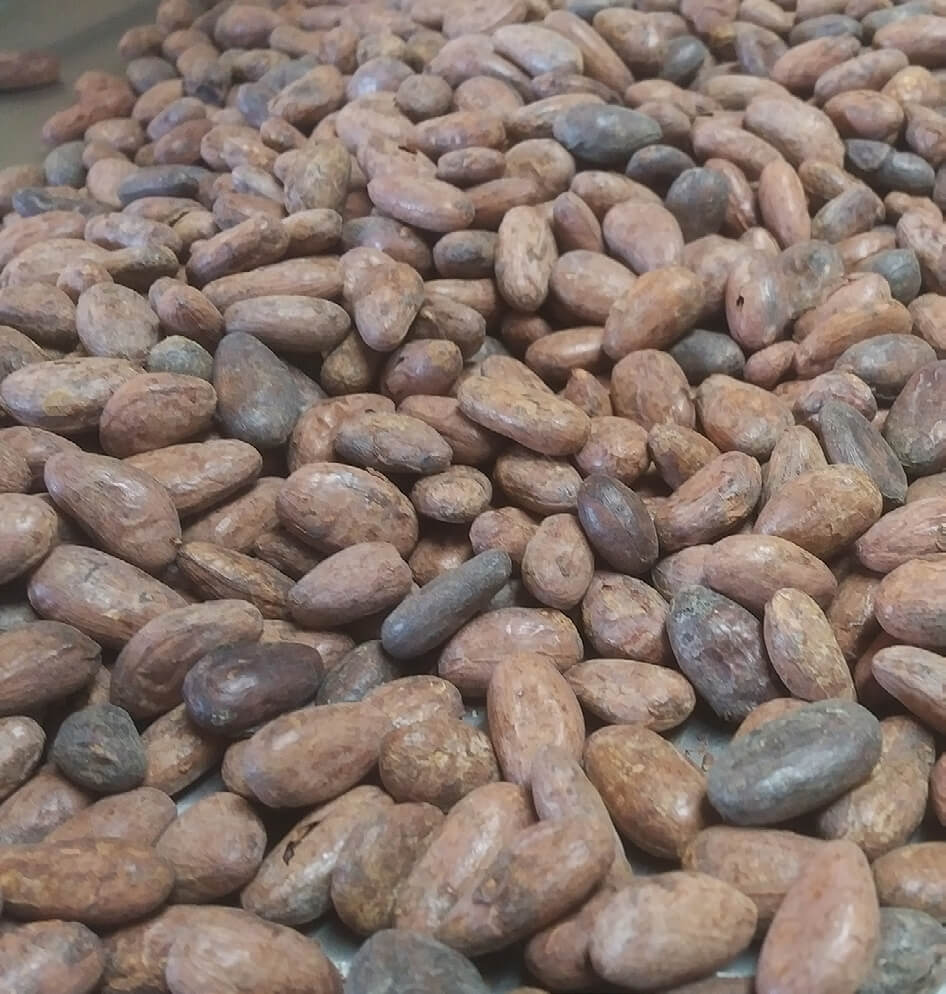 Roasting the cacao beans is the ﬁrst step in the chocolate-making process. COURTESY OF BEAR BASECAMP.

As fellow chocoholics, my daughter and I eagerly reach for the first bar, break off squares, and pop them into our mouths. As it melts across my tastebuds, a velvety, almost fruity flavor slowly emerges, firing my senses. “Mmmm,” Tessa and I both sigh approvingly. “That is really good,” I say. “It’s so smooth.” 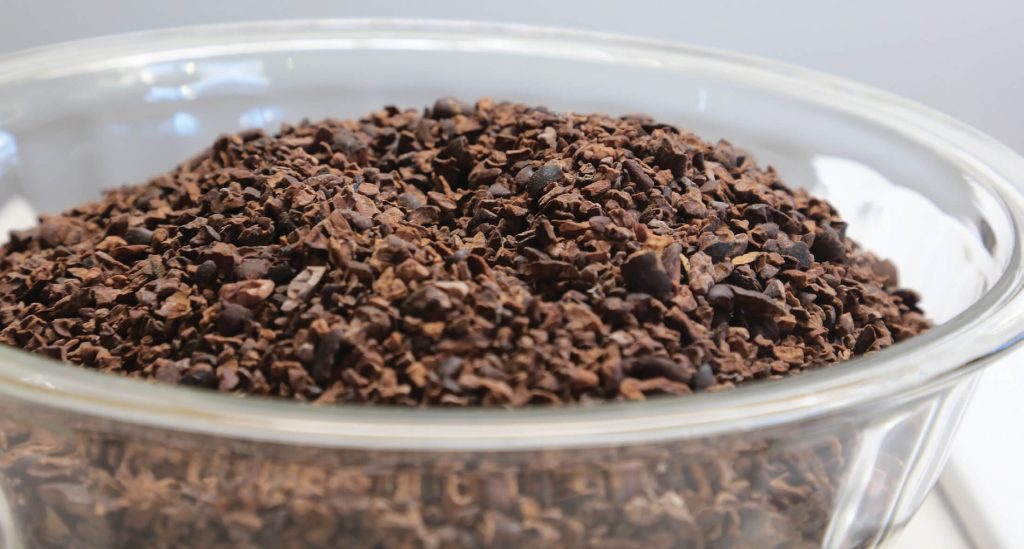 Next, the roasted beans are winnowed, meaning the outer shells are removed, leaving the meat (known as nibs)mostly intact. Rich in antioxidants, cacao nibs are also popular for their pre-chocolate bar health beneﬁts. COURTESY OF BEAR BASECAMP.

“Now take a sip of water and try the other one,” Wicks instructs. We comply and place samples of the second bar into our mouths. A sharper flavor immediately strikes my tongue.

“Wow, that’s so different!” I exclaim, turning to my daughter. “How would you describe that?” 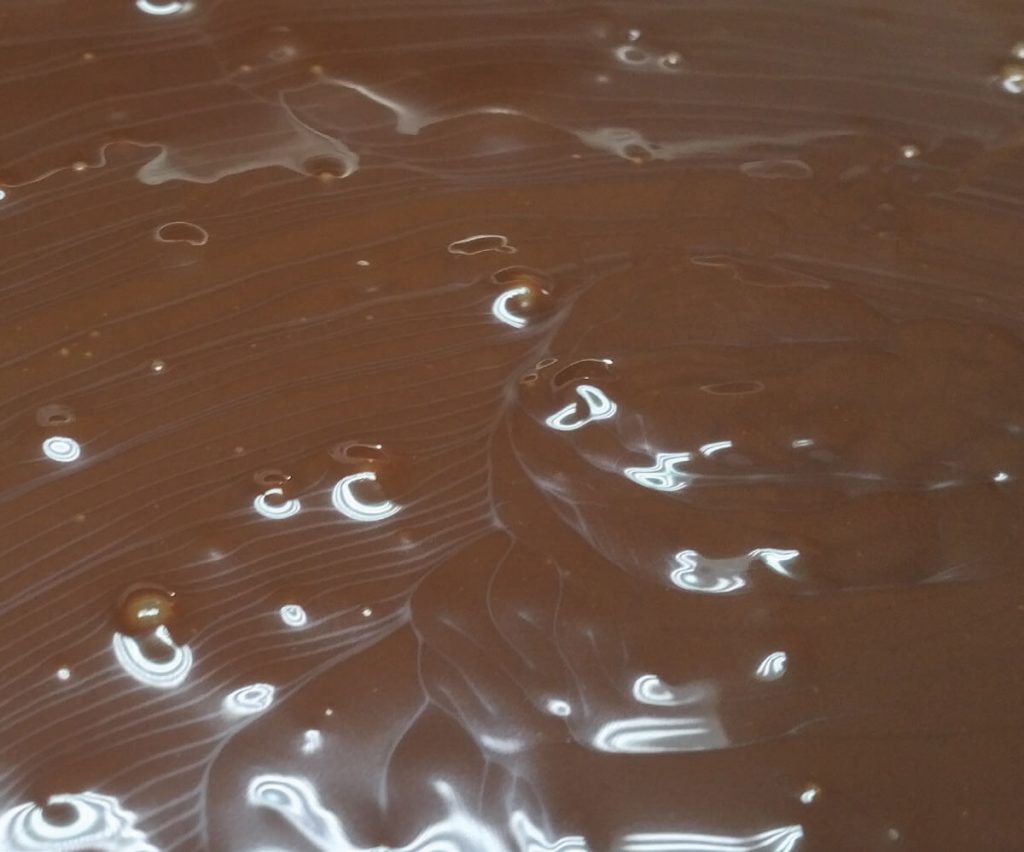 The nibs are then ground and liquiﬁed into untempered chocolate. COURTESY OF BEAR BASECAMP.

Wicks smiles and explains that the only difference between the two is the beans from which they’re made. The first bar was produced with beans from Bolivia, while the beans from the second bar hail from Ecuador. It’s those kinds of differences that have inspired a new wave of artisan chocolate producers to set up shop in Montana. 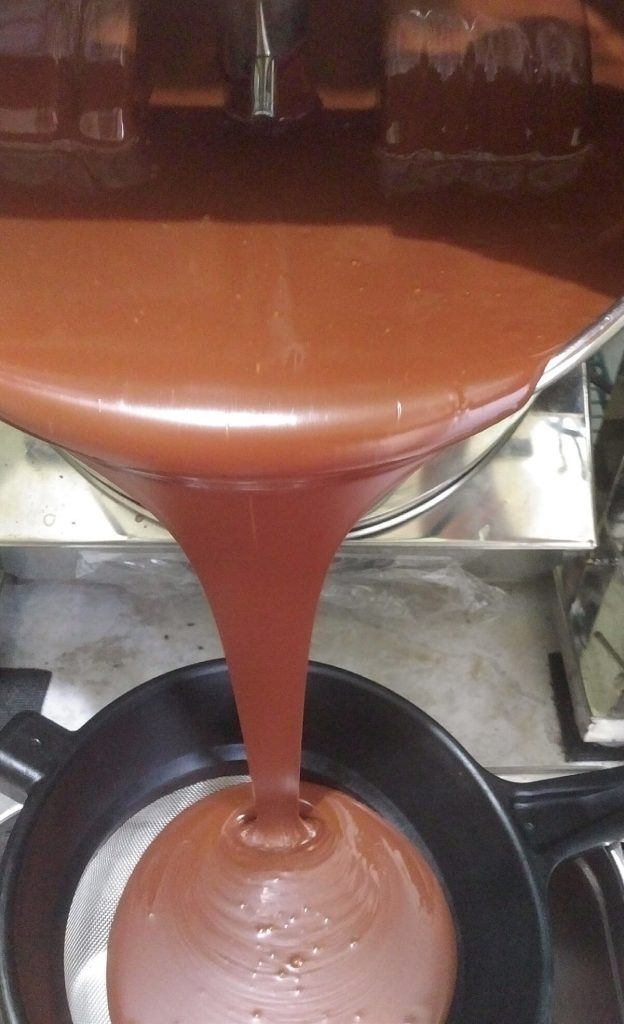 Once untempered chocolate is processed through a stone grinding machine, it is ﬁltered to remove any stray pieces of nibs. COURTESY OF BEAR BASECAMP.

a tradition of chocolate

Montana might not seem a likely place for strong confectionery traditions, but candy makers have been sweetening the state for generations. The Parrot, in downtown Helena, for instance, opened its doors in 1922 and still proudly displays glass cases loaded with sugary delights for a candy-hungry public. Dozens of other stores and makers peddle their wares around the state — so many that it leaves a chocolate lover like me wondering where to begin. As I research my plan of attack, however, one particular category of chocolate professionals caught my attention: the self-described bean-to-bar artisans.

Most small-scale chocolatiers start by purchasing pre-made, high-quality couverture — chocolate that’s formulated with a high percentage of cocoa solids and cocoa butter, with added sugar, and, often, vanilla. Specialty purveyors then melt this down to make bars, candies, bonbons, and other treats, adding their own flavors, nuts, or fillings.

What sets bean-to-bar makers apart is that they take control of that first step, selecting, buying, and processing the cacao beans themselves. The end result is not for the faint of tongue.

Wicks owns and operates Burnt Fork Bend on the 33-acre ranch she owns with her husband Don near Stevensville, Montana. Her bean-to-bar journey began in 2007 purely as a hobby. “I love chocolate,” she declares. “I’ve always loved it, and I wanted to learn how … to make a healthier version for myself.” Her initial foray included some unsuccessful experimentations with the honey she produces on the ranch. “Honey has water, and water and cocoa butter don’t like each other, so that didn’t happen,” Wicks says. “But I learned that I could narrow chocolate down to three things: sugar, cocoa butter, and cocoa beans.”

The key to making good chocolate is selecting the right beans, and like many other bean-to-bar makers, Wicks sources her cocoa (aka cacao) beans from small-scale, fair-trade producers in South and Central America. “That’s where cacao originated, and then Europeans took it to Africa, which supplies most of the world’s chocolate today,” she explains. Buying from the Americas not only allows her to support more equitable and ecologically sustainable farming, but it also leads to a more diverse and interesting selection as farmers are continually rediscovering and developing heirloom bean varieties that have been passed through generations. 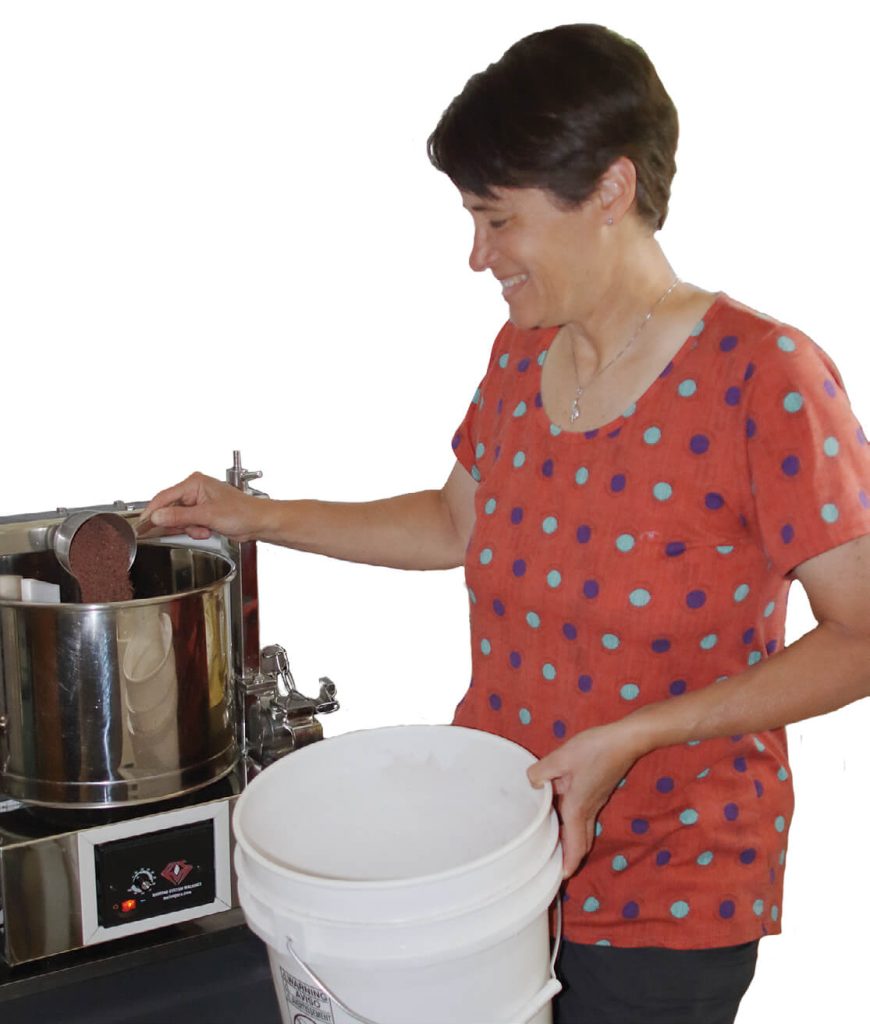 Wicks buys 120- to 140-pound bags of beans that have already gone through a fermentation and drying process, but they still need to be roasted, cracked, and winnowed before they are ready to be transformed into chocolate. When she began processing on her own, there wasn’t much equipment available for small-scale makers. She roasted the beans on cookie sheets in her oven, then cracked them in a food processor to knock off the shells. Her makeshift winnowing machine employed a Shop-Vac to separate the shells from the interiors.

Today, Wicks uses more modern equipment, including a drum roaster and a better winnower, but the final result is the same: small pieces of cocoa beans called nibs.

Turning nibs into chocolate requires that bean-to-bar makers follow a specific process. First, they use a food processor to chop the nibs into small flakes or powder that they then feed into a stone grinder, which refines and liquefies the nibs with friction and heat. At this stage, Wicks and many others add cocoa butter to improve the flow of the liquid — a step that’s more of a taste preference since beans naturally contain butter. At that point, sugar is added, since, as Missoula-based chocolatier Francesco Ducrey puts it, “Without sugar, it’s not chocolate.” Many choose to add flavorings or spices at the grinding stage, but they rely even more on the choice of beans to fashion distinctive flavors. 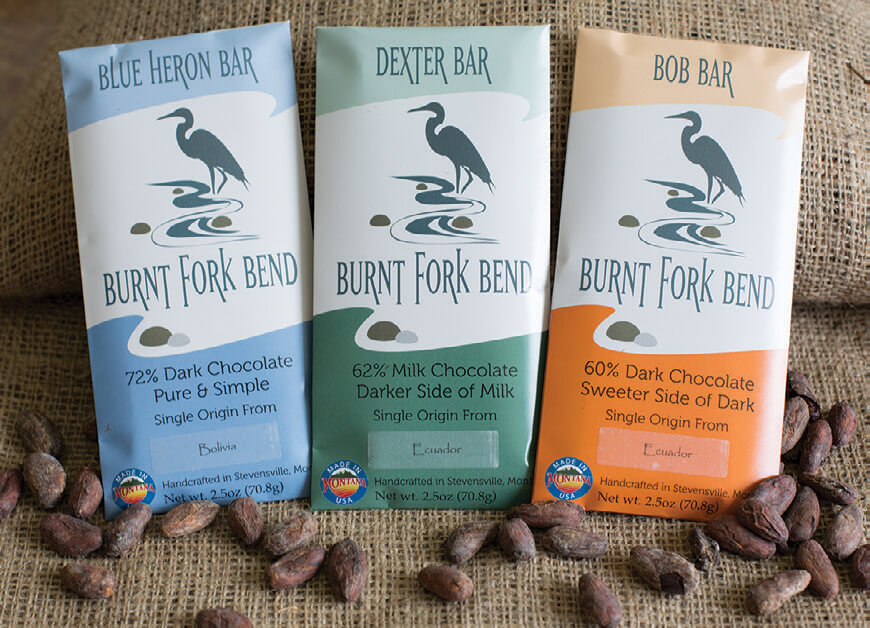 “If you try a bar by Hershey or Mars, you know what it’s going to taste like, but with our bars you don’t, and that keeps it interesting,” Wicks says. “I try to have beans from at least two different countries for my 72 percent bar, so the only difference is the beans. When people taste them side-by-side, they’re like, ‘Oh my gosh, I can’t believe how different it can taste!’”

In addition, Wicks also creates bars for milk chocolate and coffee lovers. And she’s not alone in her passion for creative experimentation.

a bear for chocolate

Originally from Delaware, Daniel Norris is a Helena-based scientist for the Montana Department of Environmental Quality and founder of the chocolate company Bear Basecamp. Norris’ interest in chocolate was inspired not only by his taste buds, but also a lifelong fascination with chemistry. “As a lot of people do, I love chocolate,” he says. “And around 2018, it was getting more expensive… I started researching the process, and it turns out that it’s very complicated to make your own chocolate from the cacao bean. But my background in chemistry and science led me to become pretty fascinated by all that, so I started researching it heavily and decided to move forward in 2019 with Bear Basecamp.”

It took Norris about 15 batches before he began to feel confident about his product. Because his certification to make food in his home does not allow him to roast the cacao beans himself, he purchases them pre-roasted from several importers and has cultivated direct relationships with small-scale cacao farmers in Puerto Rico and Hawaii. Using different beans and flavors, he creates more than 21 varieties and intensities. 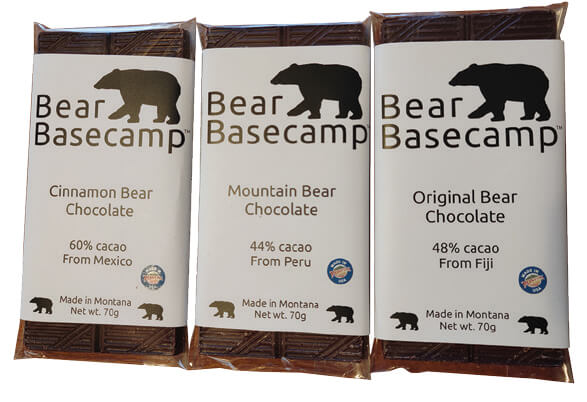 Bear Basecamp bars are sold at regional events and online. Photography by Sneed B. Collard III.

When I visited his home kitchen in Helena, Norris was pouring the molds for one of his most popular offerings, the Vanilla Bear bar. As he handed me a spoonful of warm chocolate, he explained that while he can use some beans for many products, for others, matching the right beans and flavors can pose a unique challenge. “For the Vanilla Bear, the source of the cacao changes the flavor substantially,” he says. “In the last batch, I used Indian cacao, and I thought it was going to be a really good combination, but it ended up having a very strong peanut-buttery flavor I was not expecting. That same bean, though, works very well for my Cinnamon Bear bar.” 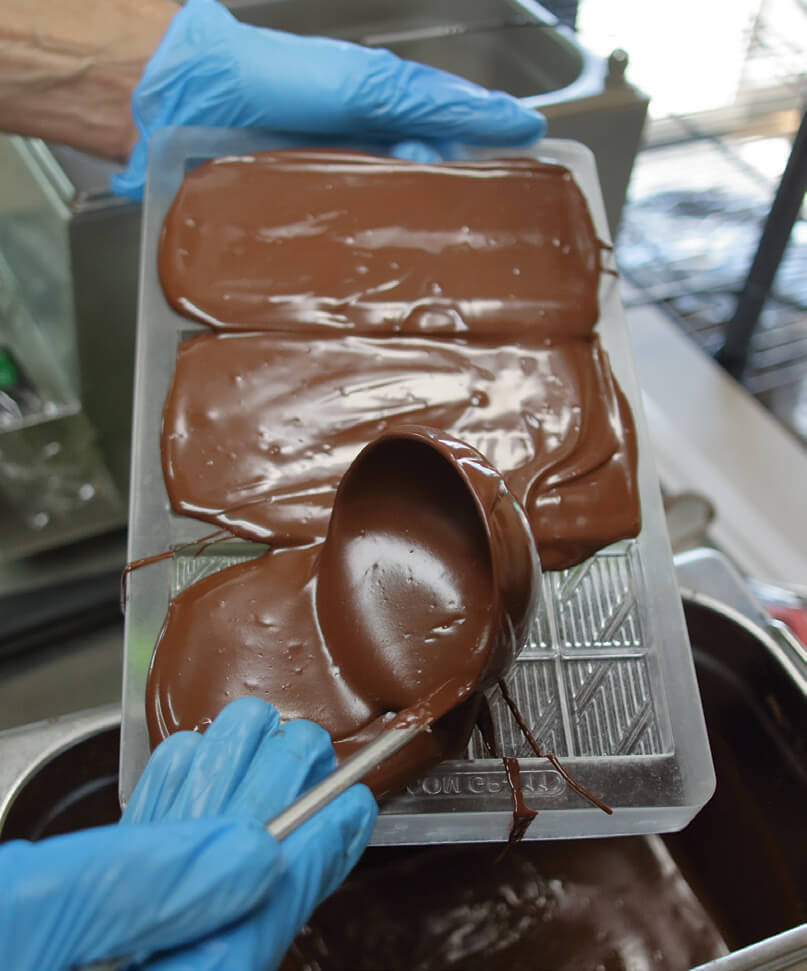 Norris sells his bars at events, such as the Helena Farmers’ Market. However, he went into business just as COVID-19 started shutting down public gatherings. He managed to stay afloat by making door-to-door deliveries from orders through his website, and with the easing of the pandemic, sales have rebounded sharply. His most popular bar has become the Wildfire Smolder Spicy variety — an appropriate frontrunner considering Montana’s regular summer wildfires.

a touch of europe in montana

One of Montana’s newest bean-to-bar makers, Francesco Ducrey, arrived in the state with a decidedly cosmopolitan pedigree. Born in Italy, he worked and lived in France, Argentina, and Switzerland before deciding to open Ducrey Chocolate Maker & Cafe in downtown Missoula in July 2020. When he and his partner Claudia moved to Montana, they knew they wanted to start a food business unlike any other. “I enjoy cooking, and I love great food,” he explains, “so I was thinking about one of the most appealing of all foods: chocolate.” 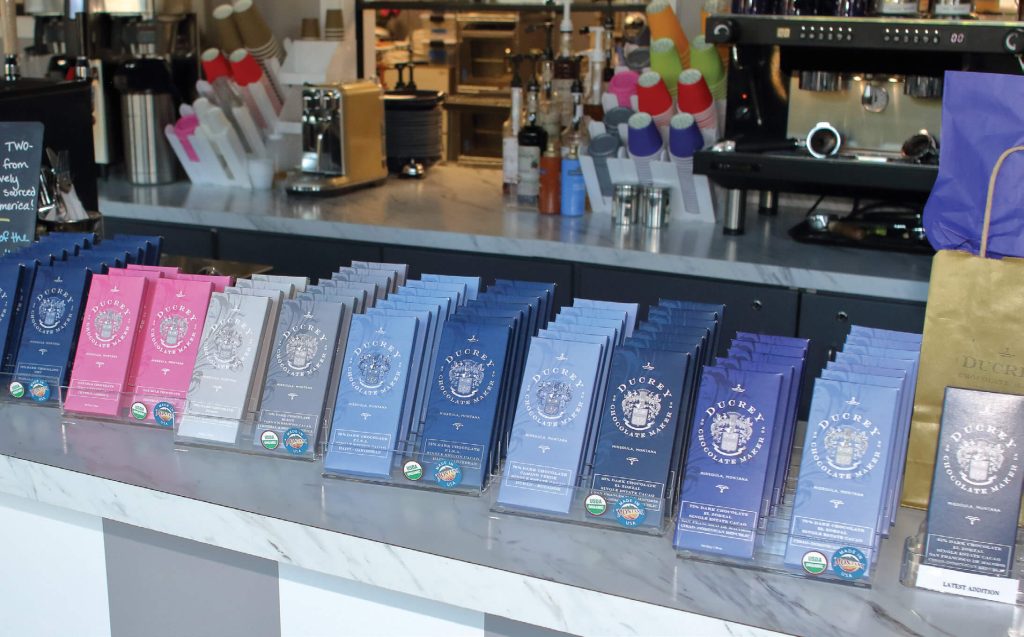 The complexity and variety of the world’s cacao is showcased at Ducrey Chocolate Maker & Café in downtown Missoula, Montana. Photography by Sneed B. Collard III.

Ducrey attended a culinary institute outside of Turin, Italy — a city with one of the world’s richest chocolate-making traditions — and he followed that up with internships in both Turin and Paris. He and Claudia launched their business as both a chocolate-making facility and a gourmet cafe offering coffee, savory sandwiches, and unique waffles.

Like other bean-to-bar makers, Ducrey places a high priority on working with small-scale farmers from the Americas, and their bars are certified organic and fair trade. To further highlight the original cacao flavors, he chooses not to add extra cocoa butter, relying instead on the fat content of the beans, which, he points out, are not actually beans, but seeds of the fruit that grows on tropical cacao trees. 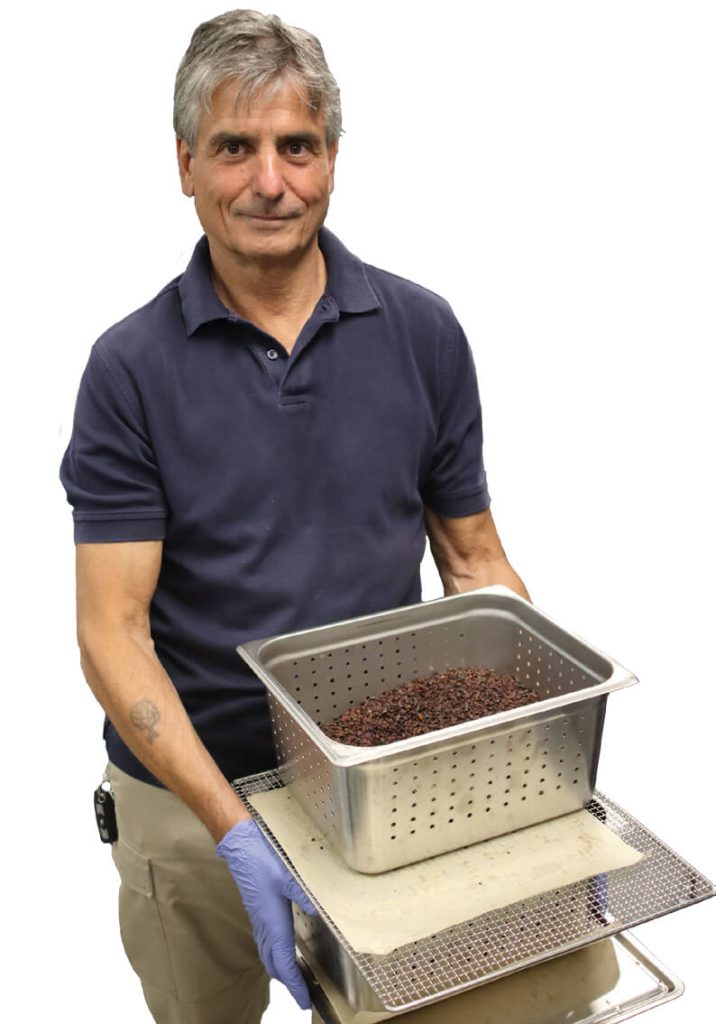 Francesco Ducrey developed his chocolate-making craft in Italy and France before opening a shop in July 2020 with his partner Claudia. Photography by Sneed B. Collard III.

Likening bean-to-bar products to fine wines, Ducrey explains: “When you buy a chateau or an estate, you buy wine from a specific location, and you know what type of grapes were used to make it.” He offers that same transparency with his products. “We have flavor peaks because we’re offering a taste of nature, and no single batch is close or equivalent to another one,” he says. “We’re promoting that authenticity and natural variations in taste.”

So, how does a chocolate novice like myself begin to explore these vast new varieties? “I always encourage my friends not to try a chocolate by itself,” Ducrey suggests. “Always compare. Always try two. Take the last one that you enjoyed, and then the new one, and match them. If you don’t have a benchmark, you cannot really focus.” 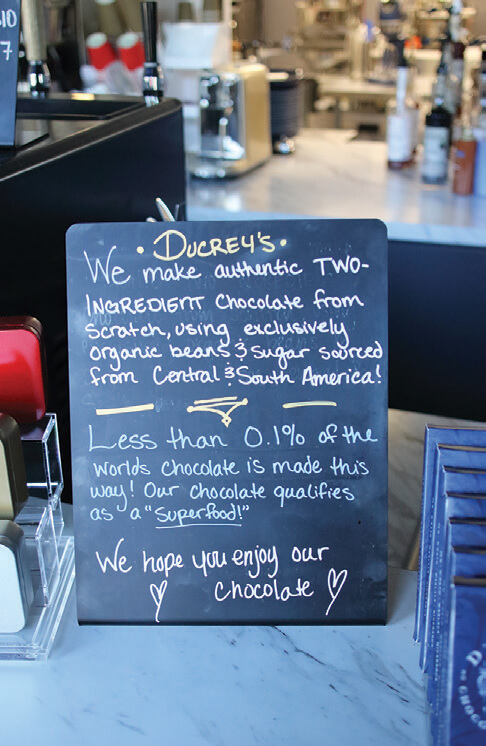 Along with celebrating chocolate, Ducrey Chocolate Maker & Café oﬀers an assortment of waﬄes, sandwiches, and beverages. Photography by Sneed B. Collard III.

To demonstrate this, he sends me home with a pair of 70 percent bars. Although both were made from beans grown on the Caribbean island of Hispaniola, they came from different growers, and I hurried home and eagerly tasted them, comparing and contrasting as Ducrey had advised. Not surprisingly, both bars were incredible, but they were also markedly and deliciously different. It was a tasty example of the breadth of variation and quality in the world of bean-to-bar chocolate, and it left me eager for further investigation.