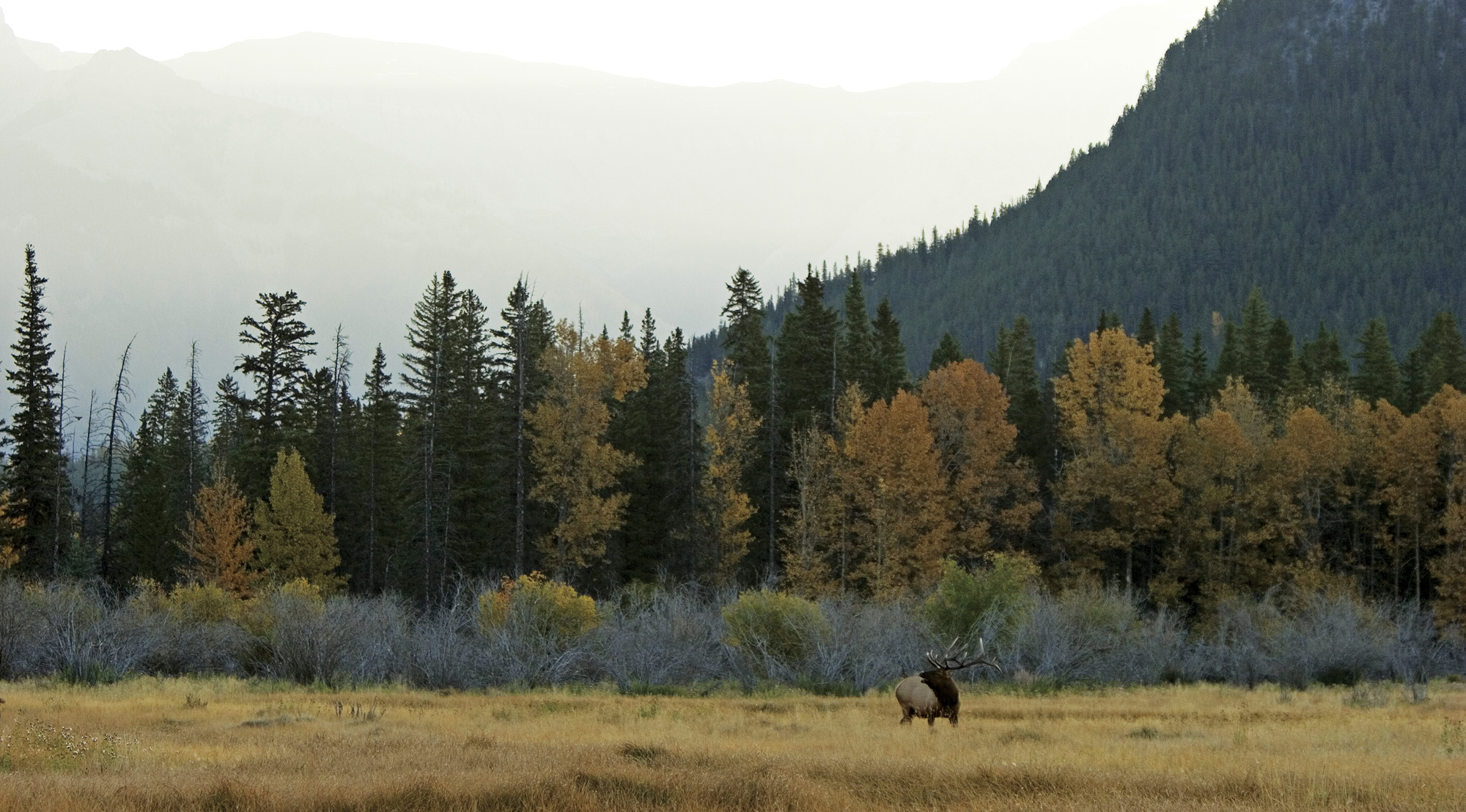 23 Jul Hunting: The World According to Elk

IF CIRCUMSTANCES WERE SUDDENLY TO DEPRIVE ME of my sense of hearing, I can imagine a painful list of sounds whose loss might move me to tears: The slow swell of bird songs in the spring woods at dawn during turkey season; the plaintive wail of a blues guitar; the uninhibited enthusiasm of my children’s laughter. I would miss none of them more, however, than the sound of bugling elk.

I still remember the first time I heard an elk bugle. It simply did not seem possible that those eerie, quavering notes could be produced by a hoofed animal. Dozens of years and hundreds of elk encounters later, it still doesn’t. Spend time among the elk in September, and there will be mornings when you simply will not believe your ears.

Most attempts to describe the phenomenon wind up borrowing heavily from human experience. Adjectives like proud, noble, and grand inevitably appear in excess. That is all hopeless anthropomorphism, of course, for elk are concerned with none of those matters. All bugling elk have in mind is staying alive and making more elk, not necessarily in that order. But even for the most literal-minded biologist, there is no proscription against enjoying the show.

While elk talk sounds pretty much alike to the untrained ear, years of experience have left me with an appreciation for the variety of noise rutting elk make. In addition to the prototypical bugle, an encounter between bulls often involves a rich vocabulary of screams, squeals, grunts, coughs, and lip smacking. Furthermore, in contrast to the rigidly stereotyped mating calls of most species, bull elk often bugle with an individual character that can mark them as distinctly as a human voice. It can be difficult to extrapolate the bugle to the bull. Some of the worst bugling I hear each fall comes from the most magnificent looking animals, while some of the sweetest music comes from soundly trounced raghorns, or even human hunters.

IT IS THE SECOND WEEK OF SEPTEMBER. Our camp is nestled unobtrusively into a fold in the terrain next to a clear stream that barely has enough water left to be useful after the long, dry summer. A series of timber ridges surrounds us, sweeping downhill from the mountains toward the central Montana plains below and providing the elk with a route from their bedding cover to the crops that have become their favored food source. We have been hunting in these transition zones for three days. While no elk quarters are hanging behind the tent, to call these three days unsuccessful is to miss the point entirely.

I leave camp in late afternoon. My favorite longbow balances easily in my hand. Elegantly constructed of Osage orange and black locust, it feels as light and delicate as a fly rod. While the bow might seem too insubstantial for the pursuit of animals the size of elk, when it is driving a heavy wooden arrow tipped with a carefully honed broadhead, it is quite capable of stopping anything on this continent, including moose and grizzly. I know as much from personal experience.

The first half mile passes quickly and then I settle into the artificially deliberate pace of the hunt. There are bears and mule deer and turkeys about, but I am still moving a bit too fast to be hunting for any of them. The fact is that I am searching the woods with my ears, listening for the haunting note of an elk’s bugle. Your imagination can conjure up that sound from the noise of the breeze in the pines, just the way your eyes can conjure up water on a summer highway, and there are several false alarms as I work my way steadily forward into the heart of the cover.

The plan is to intercept the elk as they move downhill toward the distant alfalfa fields with the west wind, it comes from below me. Whether the elk are early or I am late doesn’t matter. The fact is that I am going to be playing catch-up for the rest of the afternoon, with a wind problem thrown in for good measure.

There are only three kinds of people in the world who truly enjoy a feel for the wind: sailors, pilots, and bowhunters. For each, failure to pay attention to the air currents around them is a certain invitation to disaster. Smell is the only cardinal sense that the hunter cannot control. The ungulate nose is so keen that most humans will never begin to appreciate its acuity, although bowhunters are forced to confront it nearly every time they venture into the field.

All of which explains my apprehension about the prevailing down-slope breeze behind me as I turn toward the sound of the distant bugle. The urge to rush ahead is nearly overwhelming, but I stop instead and close my eyes, letting the wind ease past my face as I try to determine the best direction from which to intercept the elk. Committed at last, I cut back toward camp and set off briskly down the ridge.

The open parks and mature stands of ponderosa pine offer easy going and the first mile passes quickly. The meadows are choked with arrowhead balsamroot. Its leaves are dry as a parchment, making it impossible to move through it quietly. I make a mental note to avoid the stuff at all costs when I close upon the elk. Finally, I enter a stand of miniature Christmas trees on an old abandoned logging road, where I feel secure enough to bugle in an attempt to locate the elk once more.

Whether bugling, rattling whitetail antlers, or yelping like a hen turkey, every attempt to call wary game within bow range is an exchange of information that is potentially useful to both parties. I bugle a lot less than I used to nowadays. I prefer to use the bugle as a means of keeping track of my quarry while I set up the end game using the basic principles of the stalk. Now I need to know where the elk are, so I slide my grunt tube around through my armpit on its lanyard, concentrated like Louis Armstrong in front of the mic, and loose with my best.

The reply is immediate and overwhelming. Although elk are large, noisy, odiferous animals, I have managed to get right on top of the herd without realizing it. Close enough to sound like a jet turbine winding up, the bull that answers my inquiry must be nearly within bow range. As I fumble to get an arrow on the bow string, a set of ivory antler tips appear above the Christmas trees 50 yards to my left, and then the situation becomes obvious. The bull is walking right down the overgrown road toward me.

Bowhunters spend enough time studying hopeless situations to be able to appreciate good ones when they come along, and this is a very good one indeed. The wind holds as I back quietly into the cover of the brushy conifers, and the bull seems certain to pass by broadside at a range of less than 10 yards. I am painfully conservative in my shot selection in the field, but this one looks like it is going to be a tap-in.

The bull finally steps into the open and my first good look at him is nearly enough to undo my composure. His antlers seem to span the breadth of the logging road. Covered with mud from a wallow, he wears the lunatic look of a serial killer. Herd bulls get that way during the rut, but no matter how many times I see them in that frame of mind, I never quite get used to it, especially when they are 30 yards away and closing.

The musky odor of the bull precedes him down the road. While I should be years beyond the stage of buck fever, the arrow is rattling against the hardwood riser of my bow. Deliberately ignoring the sweep of antlers, I begin the mental process of visualizing the spot on his chest where the broadhead will disappear. The bull is walking steadily, but each step seems to take place in slow motion, a temporal sleight of hand evoked only by the best moments of the hunt.

Then the spell is broken. The culprit is an unseen cow that has moved down wind of me in the Christmas trees. One whiff is enough. Her explosive alarm bark shatters the spell like an angry brick thrown through a plate glass window. The bull wheels and disappears as the rumble of hooves in flight erupts all around me. For an instant, I am part of the cattle stampede scene in a dozen old Western movies, and then there is nothing but the sound of wind in the pines overhead and the silence of my own folly.

LOCATED JUST INSIDE THE NORTH ENTRANCE to Yellowstone National Park, Mammoth Hot Springs may be the best place in the world to hear elk bugle and observe the complex dynamics of the species during the rut. Go during the third week of September. The crowds will have thinned drastically, at least by Yellowstone standards, and fall foliage will be at its finest. And if you should tire of all these elk, you can always break out your fly rod and enjoy some of the best fishing of the year in nearby waters. Something for everybody; that’s Yellowstone.

Despite all the problems the park has fallen heir to, I am an inveterate Yellowstone junkie, and I take time away from my bow hunting to go every year, even when my Montana elk tag is still alive and well in my pocket due to mishaps such as the one just described. The northern edge of the park is a fantastic place to photograph elk during the rut, and when I’m stalking elk with my camera, I often find myself in the grips of the same kind of excitement that I experience when I’m stalking them with a bow, although many hunters — and many photographers — may fail to appreciate the analogy. There is only one problem. These photogenic cut-outs posing beside the road in the park aren’t real elk.

Habituation — the same characteristic that makes these elk so accessible to the public — has deprived them of their fundamental elkhood. Magnificent as they may seem, their beauty has the hollow appeal of fashion models, all posture and make-up without any soul. Move among them with your camera and you will soon notice that the wind doesn’t matter to them, that they regard your presence as a minor irritation rather than a negative pole about which to orient their conduct. However friendly their accommodation may be to the telephoto lens, it deprives the observer of any chance at the real thing.

All of which helps to explain my fascination with the longbow and the pursuit of elk, among a great many other wary animals. The bow has given me the opportunity to know elk as no Yellowstone visitor will ever know them. We will never perceive our surroundings the way elk do: as a vast torrent of scent sweeping past us on the breeze, a fragile compromise between pastoral tranquility and jagged panic separated by nothing more than the sound of a stick popping or the sight of incongruous motion in the trees. Even so, operating among them as a predator without benefit of modern weapons has given me a glimpse of the world according to elk.

The experience has made me a better hunter as well as a better human. 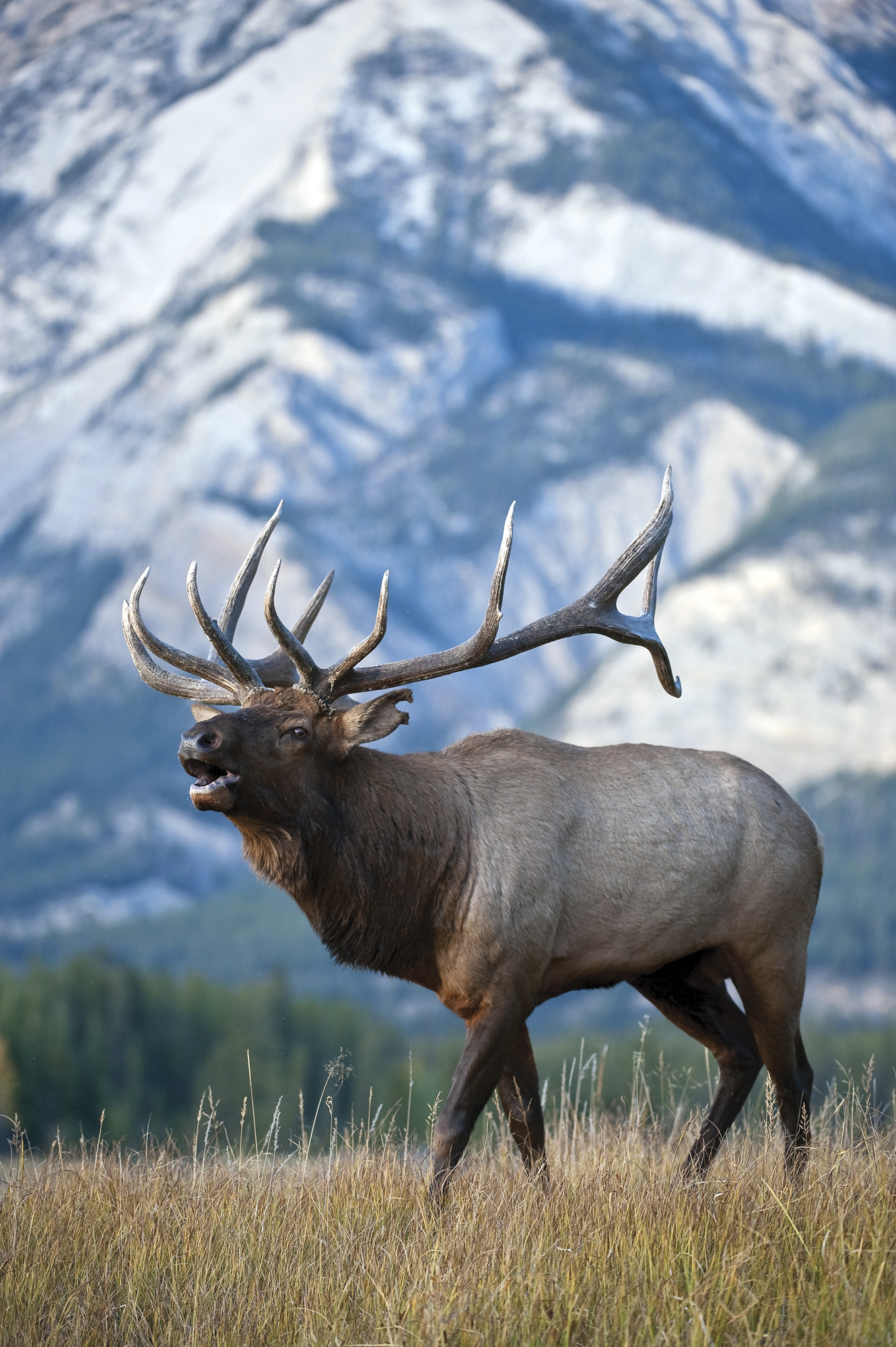 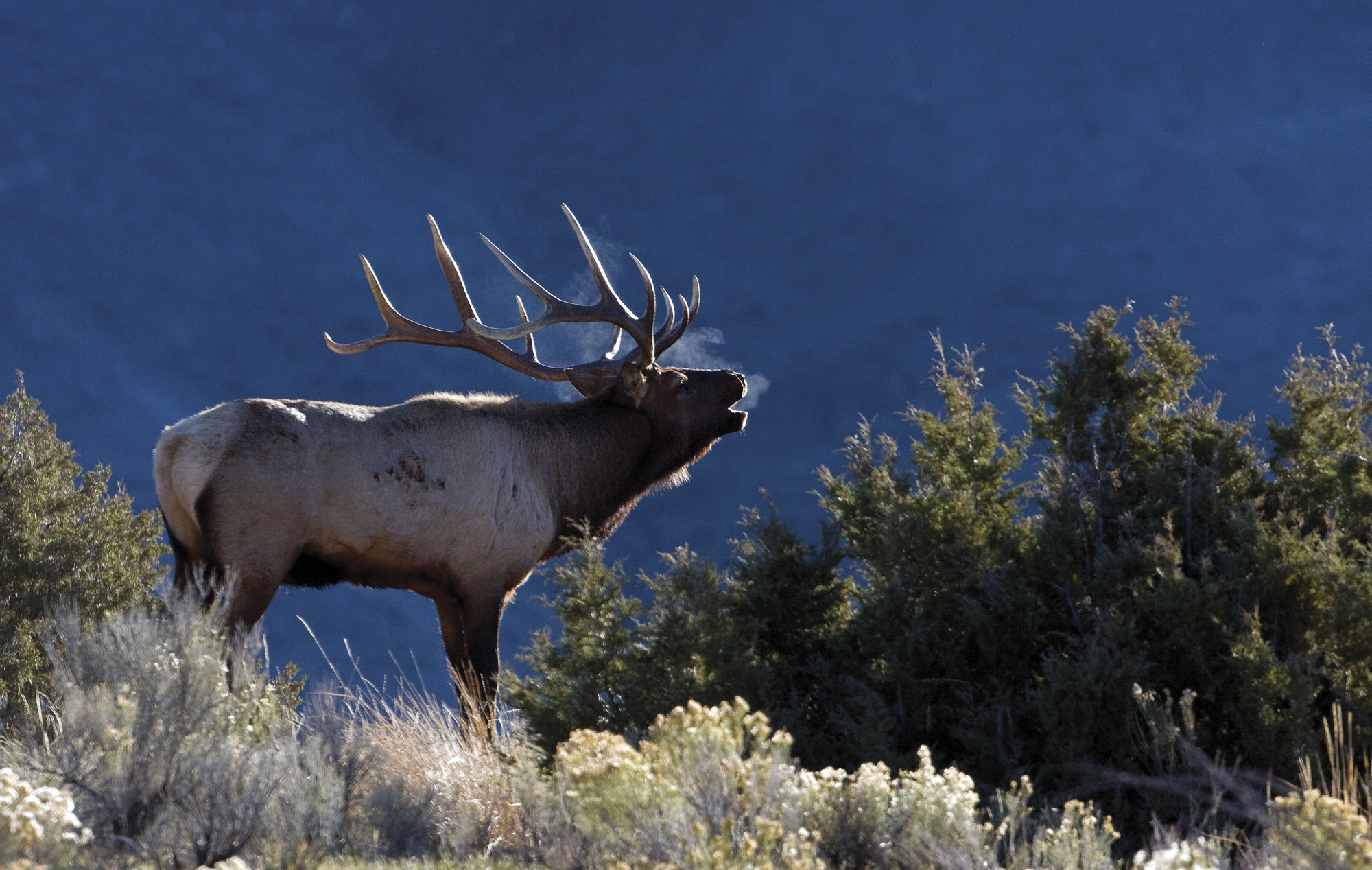 Photo by Denver Bryan / Images on the Wildside