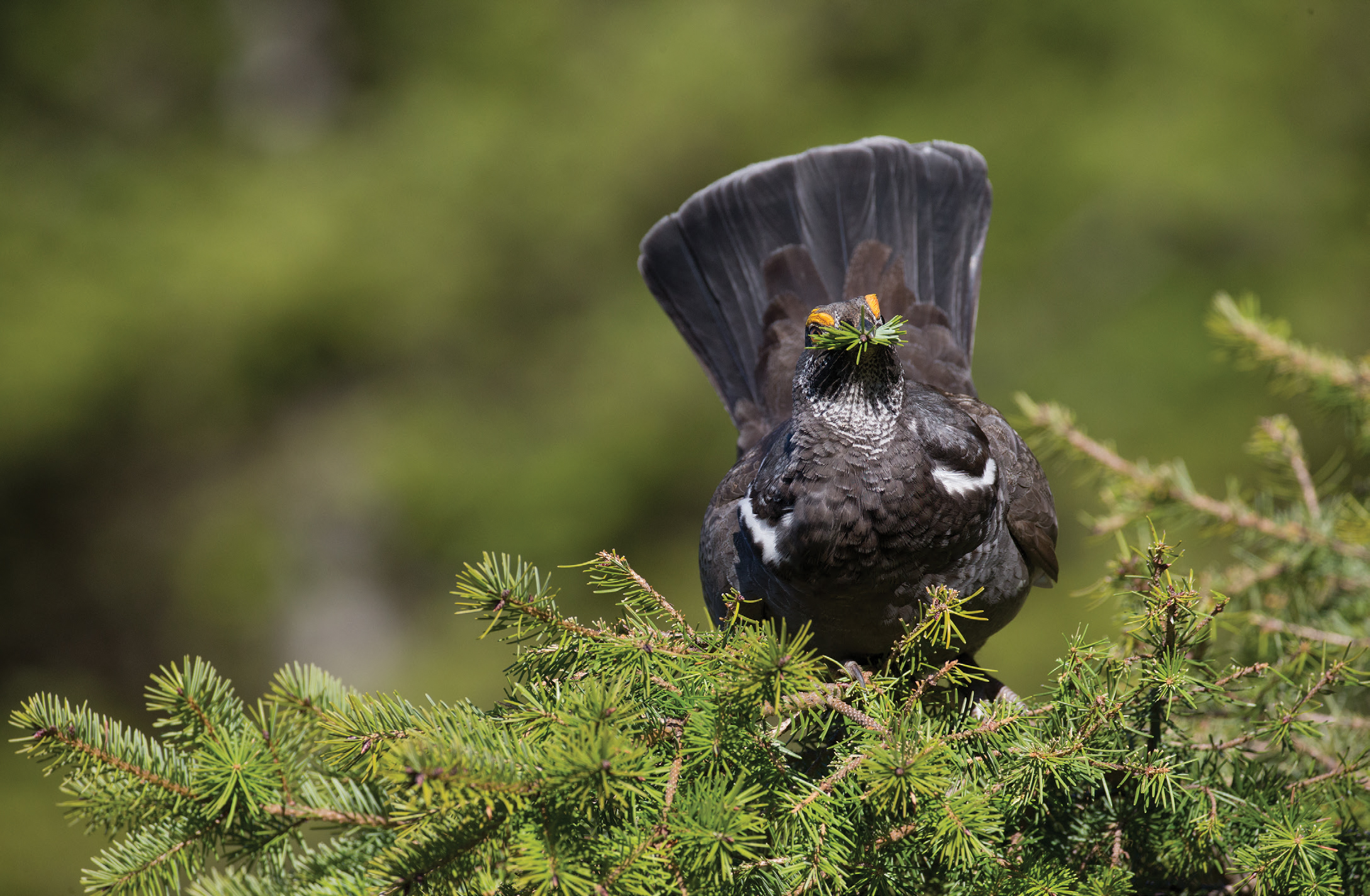 29 Sep The Woods are Lovely

I have always loved the open prairie grasslands and coulees that form typical habitat for sharptails, Huns, and pheasants — Big Sky Country defined. An enormous swath of it lay spread out before me one cloudless September morning, running all the way north from the base of the Judith Mountains to the distant Missouri River Breaks. But even though I wore a blaze-orange game vest and carried a 20-gauge side-by-side shotgun, I had no intention of hunting any of it. The dogs and I had left the open prairie far below us to commit our day to the mountains, pine woods, and blue grouse.

A brief biological diversion is in order here: Before sharp-eyed readers protest that there is no longer any such thing as a blue grouse, I’ll admit that they would be technically correct. In 2006, the American Ornithologists’ Union decided that the large Western game bird long known as the blue grouse actually included two separate species. DNA analysis prompted this decision, and other than differences in their range, the distinction is subtle. Blue grouse living near the Pacific Coast became sooty grouse, while those occupying inland mountain ranges became dusky grouse. I had trouble remembering which was which, until I dreamed up the mnemonic “Sooty by the sea.” All former blue grouse found in Montana are now dusky grouse, but experienced hunters have called them blues for so long that they’ll likely never stop. 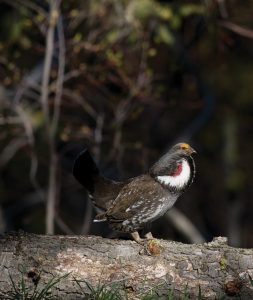 What was once called the blue grouse has now been divided into two separate species: the dusky grouse, pictured here, and the coastal sooty grouse.

That morning, the dogs and I set off across an open meadow that was choked with arrowleaf balsamroot adjacent to the tree line. Blue grouse are one of the few species that move to higher elevations during winter, which they spend eating spruce needles in the shelter of coniferous forests. They become spookier and harder to hunt there, and I hoped to catch some birds out in the open where they would hold for my pointing dogs and offer unobstructed shooting.

Nearly two hours of hiking passed before we found some. Suddenly Maggie, my female German wirehair, locked up on point near the edge of the timber, quivering with an intensity that told me the bird was right under her nose. Max, my young male, moved in to honor her point as I clawed my way uphill to join them. I barely had time to get my feet planted before the hillside erupted in wingbeats, and I snapped off a shot at a dark form as it hurtled around the corner of the trees. 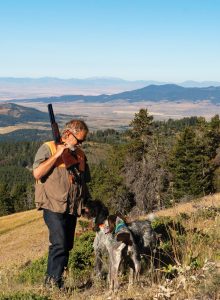 As is often the case with early-season blue grouse, the bird was not alone. Anticipating this situation, I hesitated before breaking my shotgun to reload my first barrel, a decision that allowed me to kill another bird with my second. Even if there were more (and it turned out that there were), two was enough from one group. I sent Max on the easy downhill retrieve and gave Maggie a line in the direction of the first bird, which I wasn’t even sure I’d killed. After enough years of upland hunting, one develops a feel for a good shot even when the eyes can’t confirm it. Maggie proved the point several minutes later when she returned with the bird cradled in her mouth.

The prairie game birds far below us that day constitute Montana’s most popular upland trio with good reason. All three are abundant in good years and delicious on the table. They offer open shots and frequently occupy terrain that’s easy to hunt. Roger that to each of these considerations, but I’ve always enjoyed hunting (and fishing) outside the box. Montana also offers another upland trio that receives far less attention despite the excellent opportunities they offer those willing to seek them out: blue (dusky), spruce, and ruffed grouse, lumped together in the regulations as “mountain grouse” because of general similarities in their habitat. “Forest grouse” would be an equally descriptive term, and that’s the one they use in the Pacific Northwest. 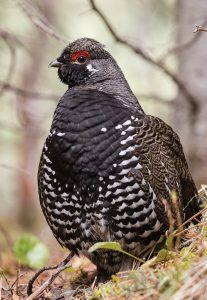 The spruce grouse is often referred to as the “fool’s hen” due to its tame qualities.

Granted, mountain grouse hunters usually have to climb hard and shoot through more trees to produce a wild game dinner, but several factors offset these ostensible drawbacks. (As it happens, I enjoy hiking in the mountains and challenging wing-shooting.) During the early season, the mountains are likely to be cool and pleasant while the prairies are scorching. Hunting pressure is light, and if you run into another person, he or she will more likely be carrying a bow or rifle than a shotgun. (I encourage efforts to avoid ruining someone’s elk hunt with noise from shotguns and dogs.) Best of all, mountain grouse are creatures of public land. As I’ve watched access to private land hotspots for sharptails, Huns, and especially pheasants evaporate, it’s reassuring to know that mountain grouse opportunities will always remain as close as the nearest national forest. 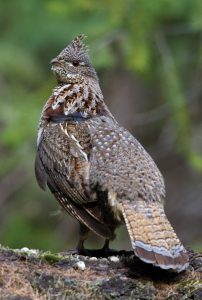 The ruffed grouse prefers woodland habitat, particularly deciduous woods such as patches of aspen and alder.

Like blue grouse, spruce grouse have undergone biological reclassification, and once again the “lumpers” prevailed. At one time regarded as a separate species, the Franklin grouse first described by Meriwether Lewis in 1805 is now officially a subspecies of the spruce grouse. By any name, this boreal grouse occupies the trio’s bottom rung as a game bird. A backcountry inhabitant, its natural means of defense is to flutter up into the lower reaches of a nearby tree, barely out of reach of whatever fox, coyote, or other terrestrial predator flushed it. But this evolutionary behavior does not reflect encounters with human beings, whether they are armed with shotguns or rocks.

This makes spruce grouse the definitive fool hens. I seldom target them in Montana, and most of those I’ve taken here have fallen incidentally to my bow during archery season. Back when I lived in Alaska though, I valued them for the very qualities that make them an unsatisfying game bird. I did a lot of wilderness hunting back then, and spruce grouse fed more moose camps than I can count. While they are also the least appealing of our mountain grouse as table fare (blue grouse are outstanding), they taste a lot better than freeze-dried food or the caribou I missed with my bow. 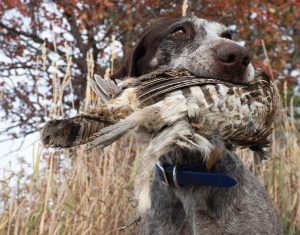 The author’s dog Maggie carries a Montana ruffed grouse that she both pointed and retrieved. Mountain grouse hunting is a great opportunity for versatile bird dogs that can perform both jobs.

The third member of our mountain grouse trio, the ruffed grouse, may be the hardest to understand from a wing shooter’s perspective. When I was growing up in northern New York 60 years ago, ruffs were the king of game birds — wary, fast, and extremely hard to hit. Hunting them successfully required a high level of skill with a shotgun and a great dog, and my father had both. An unenforceable 40-grouse season limit was in effect at the time, and when my dad filled it, the local Rod and Gun Club reacted as if he’d broken Babe Ruth’s single-season home run record (which still stood at the time).

I met a different version of the ruffed grouse when I moved West, and I’m not sure I can explain why ours act so differently from their New England counterparts. They are the same bird — Lewis and Clark described them in their journals. But they don’t hide so warily that you’d never find them without a pointing dog, or explode as abruptly when flushed. Fortunately, these are just generalizations. Every year, the dogs and I find ruffed grouse in Montana that can walk me back down memory lane to my first bird dog, my first shotgun, and the first game birds I ever killed on the wing. 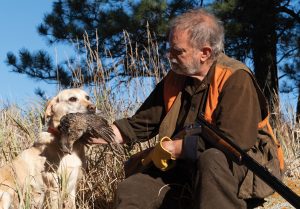 The author with Rosy, one of his female Labrador retrievers, and a Montana ruffed grouse. While he usually hunts all Montana upland species with pointing dogs, he finds that Labs also enjoy hunting and can benefit from the tune-up prior to duck hunting season.

Even after all these years, I equate upland hunting with the blazing autumn foliage that surrounded us when I took to the field as a kid. Prairie bird hunting offers little more than glimpses in the coulees, and since blue and spruce grouse prefer coniferous habitat, hunting them offers little more.

To enjoy total immersion in fall color when I’m carrying a shotgun in Montana, I seek out ruffed grouse cover, as I did one day not far from our home in the foothills of the Big Snowies back when Maggie was still just a big, floppy-eared puppy. I’d heard ruffed grouse drumming there while hunting spring turkeys, but the landscape looked dull and dreary, with the trees’ first green buds still weeks away. Now the draw was aflame with yellow aspen leaves interspersed with scarlet hawthorns. Even if the birds had somehow disappeared, this looked like a place I should be hunting ruffed grouse, which love the cover of deciduous trees.

We found two over the course of a leisurely morning, and Maggie pointed them both. I dropped the first bird in a shower of aspen leaves after an explosive rise. The second waddled away in front of the dog as I struggled to decide how my wife Lori and I would divide the lone bird in my game vest after we’d cooked it. I let it disappear into the brush unharmed. One of the many lessons my father taught me years ago was that one does not shoot birds on the ground.
Some lessons from the field last forever.