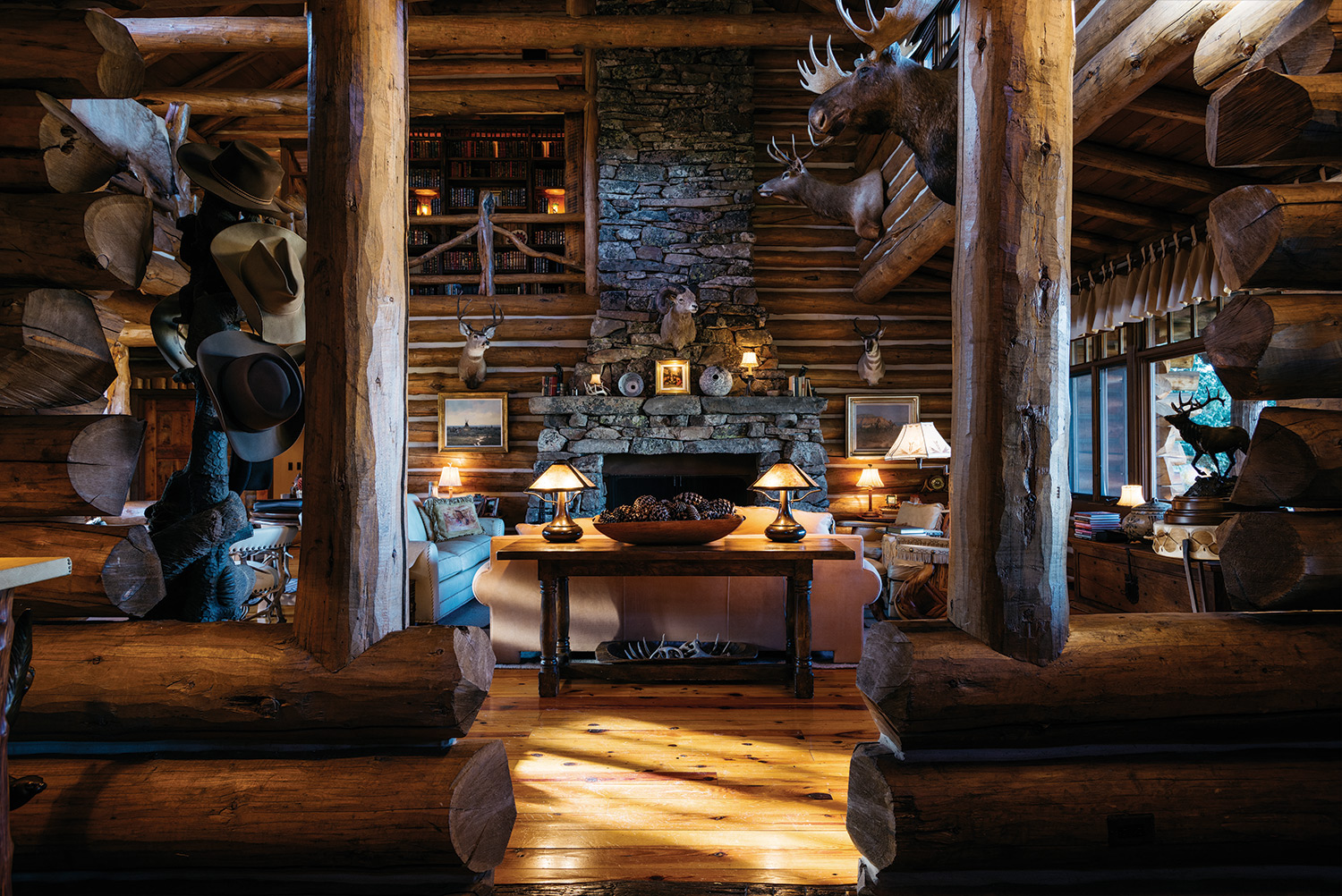 Inside and out, this classic lodge-style home exudes charm, warmth, and the sense that it has been lived in and well-loved over the decades.

12 Apr The Warmth of History

THESE DAYS, IN THE WORLD OF RESIDENTIAL CONSTRUCTION, cautionary tales are a dime a dozen: the stories about contractors and clients who simply don’t get along, who miscommunicate, and who part ways on hostile terms. Few and far between are the tales of smooth-sailing projects that remain amicable from start to finish. And rarest of all are the instances when homeowner and homebuilder ultimately become lifelong friends. 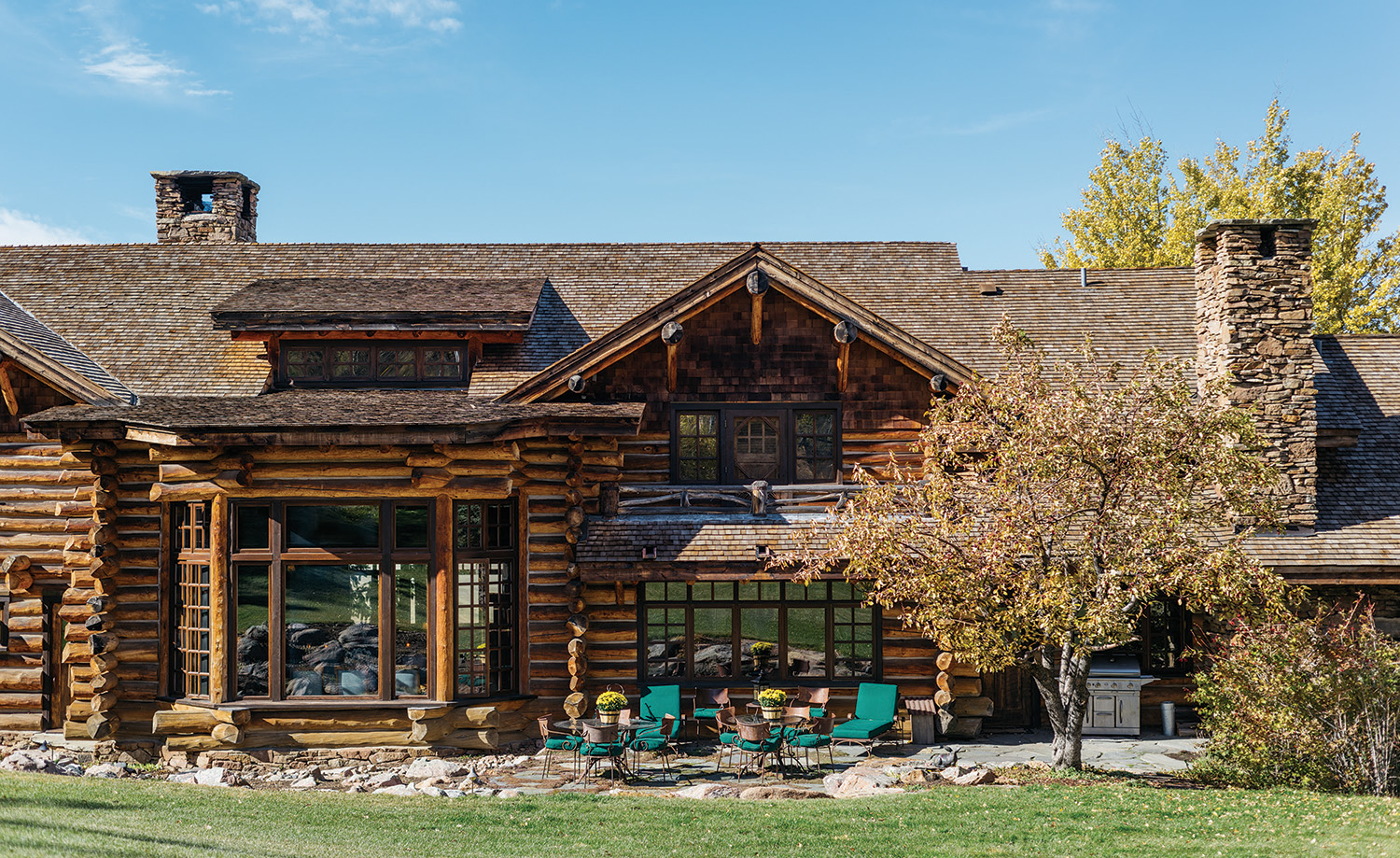 “However it happened on that first day, a relationship was started, and it has been maintained over all these years,” said Justin Bowland, partner and vice president of the Bozeman-based building firm, Yellowstone Traditions. He was referring to the relationship between his company and the owners of Corral Creek Ranch, and if he couldn’t remember exactly how the conversation began, you can hardly blame him — those first discussions were way back in 1992. 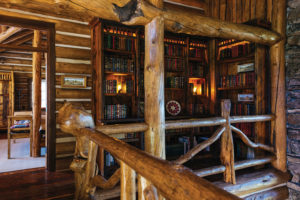 “It was very much a beginning for all of us,” recalled Pam Rentschler, owner of Corral Creek. “Yellowstone Traditions was just beginning the process of putting together their construction company, and I think we were the first clients to do a project from blueprints on through.” 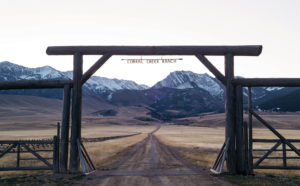 Not everyone would take a risk on a fledgling construction contractor, but Rentschler and her late husband, Fred, recognized a company that had what it takes to execute their vision on the one-in-a-million property they had recently purchased.

“This was my husband’s dream, and at first I was just along for the ride,” Rentschler remembered. They had spent countless hours scouring the West for the perfect property — Colorado, Wyoming, Idaho — until their travels brought them to Southwest Montana. “We came over through Virginia City, and the Madison Valley just opened up to us and my heart started to flutter. It was love at first sight, kind of like that John Denver song: coming home to a place you’ve never been before.” 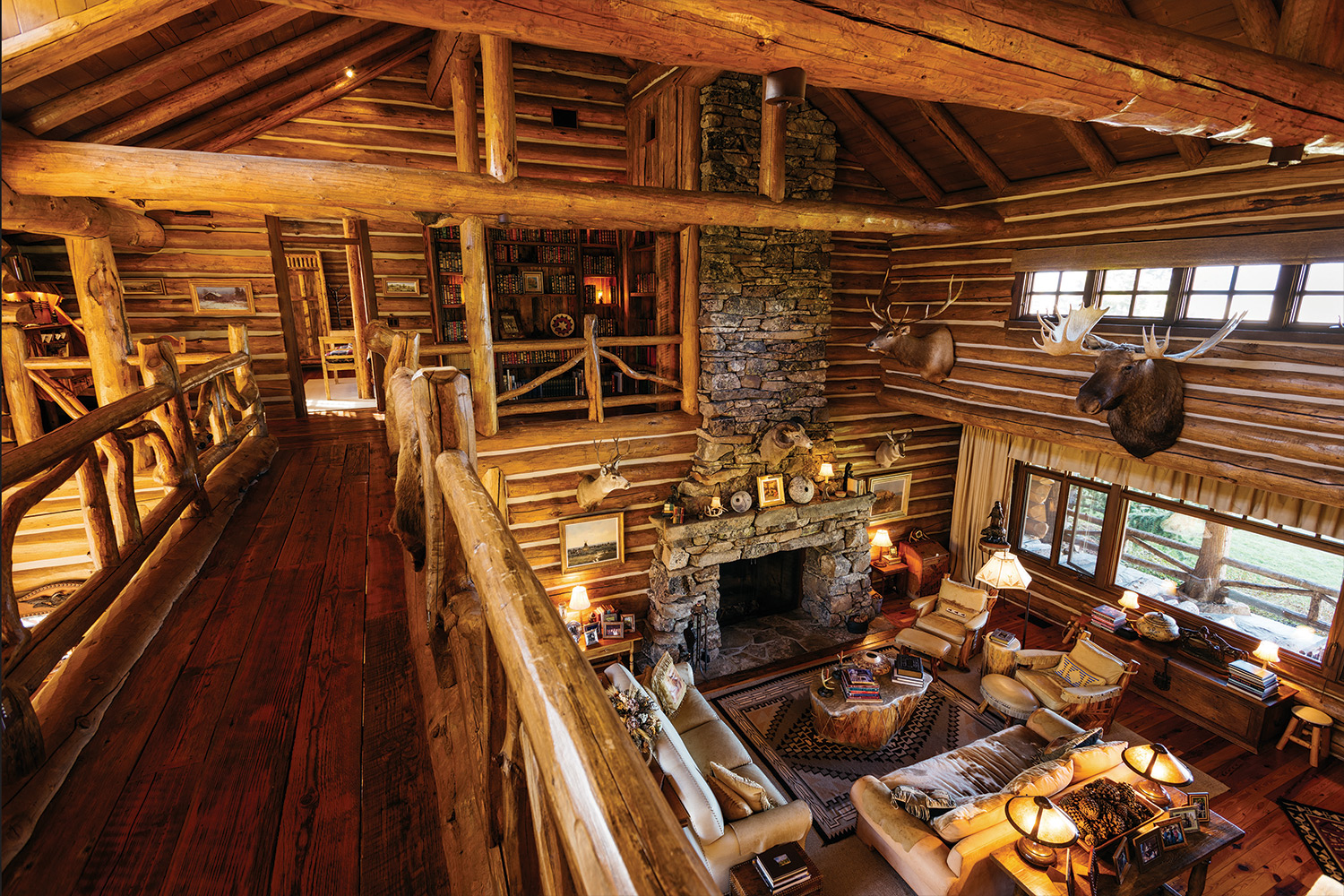 Builder Justin Bowland says the warmth and sense of history remind him of a classic national park lodge, such as the one at Old Faithful in Yellowstone. Left

That initial and instantaneous love of place set the tone for everything that came after. Rentschler and her husband knew what their concrete goals were for the property: to continue operating it as a working cattle ranch, to use the existing 1930s-era structures as much as possible, and to create a home that was warm and inviting — not just for them, but for everyone who worked on or visited the ranch. 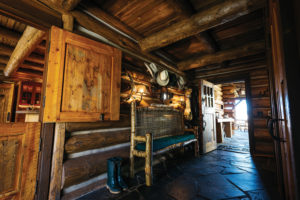 Throughout the house, the architecture pays homage to the area’s ranching and agricultural heritage. 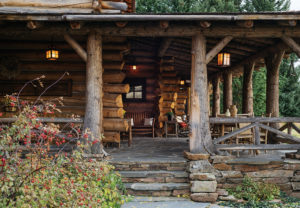 Much of the timber and stone used in the construction was sourced directly from the property.

They also were adamant that the land be treated with the reverence and respect that it deserves. “I have never, ever taken the ranch, the land, or anything that I get from being there, for granted,” said Rentschler with emotion in her voice. “To me, every day being here is a gift. It’s not something we own, it is a privilege to be here. Somebody will be here long after I’m gone, and it’s an honor to be guardians and stewards of something that gives you so much on a daily basis.”

With all that in mind, the Rentschlers and the Yellowstone Traditions team worked together to create the perfect place, from the ground up. “Even though I grew up in the construction world, and I have a background in interior design, I prefer to give artistic license to the people that know their jobs the best,” said Rentschler. “I would say to them, ‘What would you do if this were your place?’ And then it becomes something personal to them, it’s not just something that I said I wanted. It adds more creativity and pride when they can do something they always wanted to do but never had the chance.” 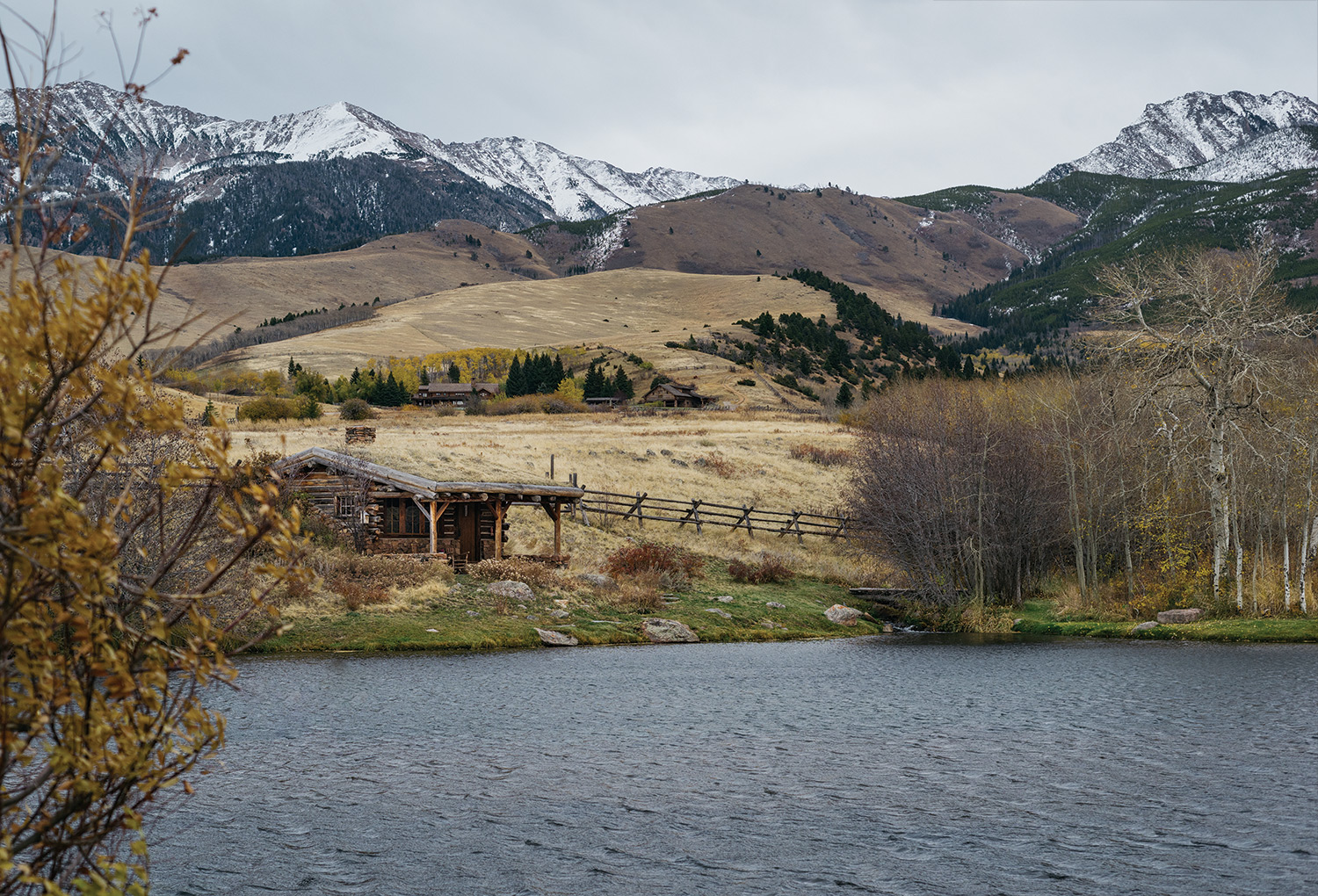 The property still functions as a working cattle ranch, and in many ways, not much has changed since the land was first homesteaded 100 years ago.

Based on the results of their collaborative brainstorming, the Yellowstone Traditions team got to work. Antiquated plumbing and electrical systems rendered the existing farmhouse unsalvageable, but they painstakingly dismantled it in order to reuse as many of the materials as possible. Stone and timber were harvested from the property in an effort to maintain a direct tie to the landscape. Other old buildings were deemed restorable, and were slated for renovation. Construction got underway, and slowly, over many years, a small gaggle of buildings took shape: the main lodge, a horse barn, the ranch manager’s home, bunk houses, and various outbuildings. High up in the hills appeared a one-room stone-and-timber cabin, free of plumbing or electricity, a nod to simplicity and history. 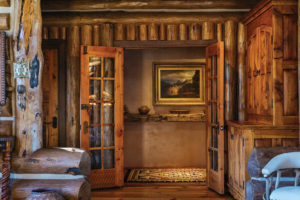 Bowland was quick to note what the house is, and what it is not: “This is not a trophy home,” he said. “It’s such a welcoming place, and you feel like you’re home when you get there. It’s comfortable, it’s a place that’s lived in.” 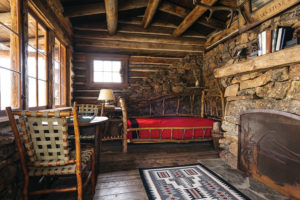 He attributed most of that feeling to the care and presence of the homeowners, but also to the building itself. “These days we’re seeing a lot more of the ‘rustic modern,’ where there’s more glass, more steel, and ultimately a cooler feel. They’re just not as warm as the traditional log stack. There’s a sense of history, the railings that have been touched over time. There’s a soul, it could tell stories. You can sit down in any room and be comfortable, any time of day, and feel good about where you are.” 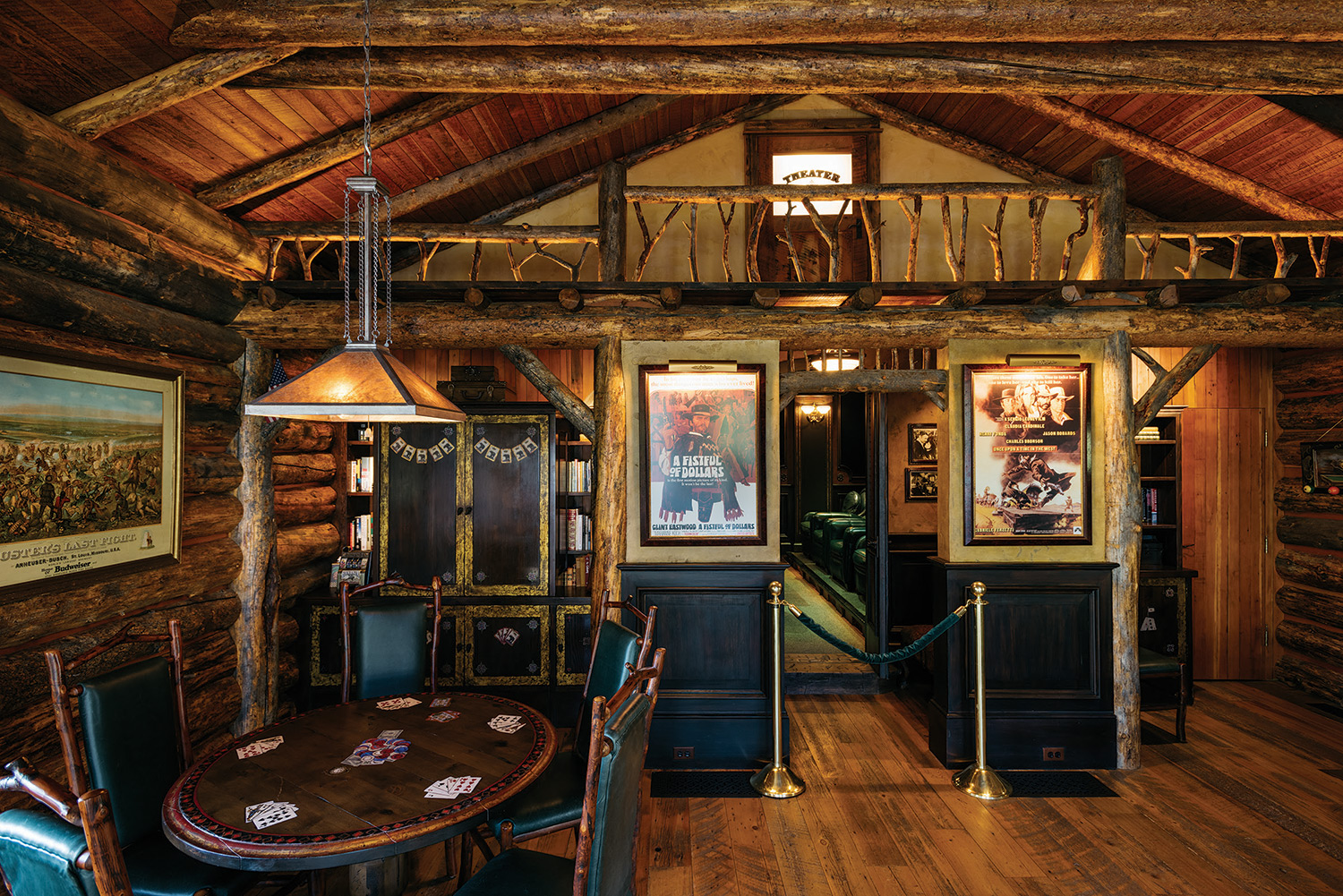 The second floor of the horse barn houses a game room and a small home theater — complete with recliners for the human movie-watchers, and dog beds in the corners for canine guests. 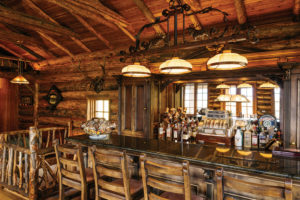 The bar in the barn has all of the charm — and all of the libations — of an old-time saloon. 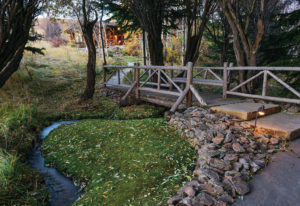 Over the course of 25 years, Corral Creek has seen buildings dismantled and repurposed into new homes. It’s seen thousands of head of cattle come and go, and its acres have been traversed by people, dogs, and horses. Seasons have cycled, the elk have trekked from high country to low and back again, from aspens to alfalfa. And, this place has been the stage on which an enduring human story has played out as well. “This is not just a working relationship,” said Bowland, “but more of a family relationship — for everyone who has worked or does work there.”

He said that even though the building process is over, he still heads out to the ranch every chance he gets, to relax and remind himself why he’s in the building business in the first place. “Isn’t it great when you have a client that you’re also friends with?” he said. “Pam refers to the place as belonging to everyone who ever touched it, and it’s great to have that connection to something you’ve been part of creating.”