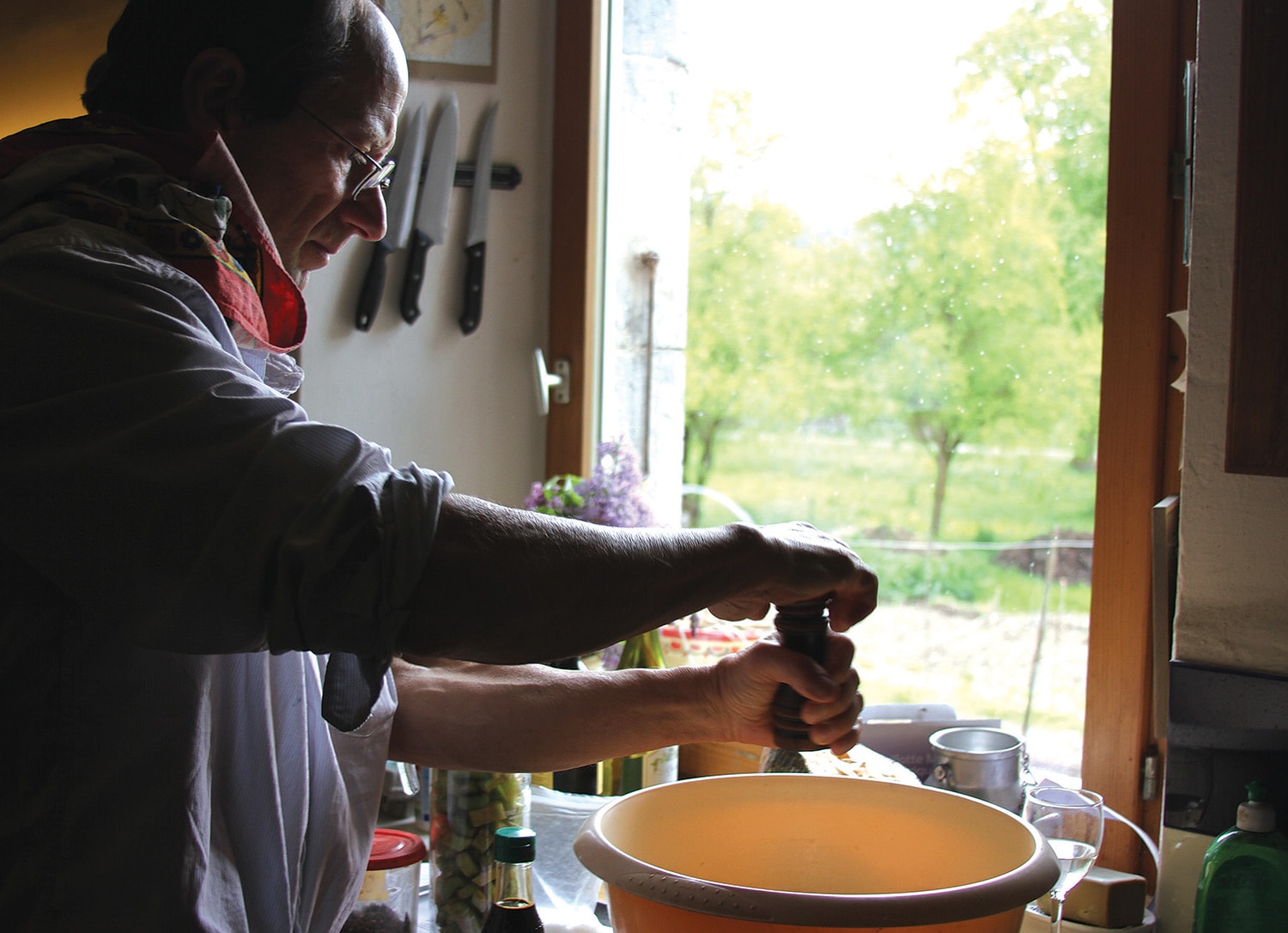 I CAN’T SAY FOR SURE EXACTLY WHERE THE IDEA CAME FROM, but I can tell you the approximate location of the when, which was sometime in my 50s; and me, a child of the 1950s. I’m a hunter-gatherer by blood and disposition, hardwired to take pleasure in bringing back to my family the brace of grouse, the loin of venison, the basket of wild berries. To me, stories and writing are just as much a form of sustenance as meat, fruit, bread. Literature was, is, a garden, and I wanted to share it with those who were hungry for it. I was a little terrified that there were no longer those people out there who were as hungry for it as I had once been.

In middle age, I was a little worried that I might be starting to be not as hungry for it as I once had. So there were definitely two things: my own needs, and wanting to share what I thought was great in the world with others — wanting to help preserve it, like an activist or an archivist. And there was a third thing, not so self-centered at all, nor even value- or aesthetics-centric: the good of simply looking back midlife, and wanting, intensely, to say thank you. No work proceeds any distance at all without great and random servings of luck and endurance. 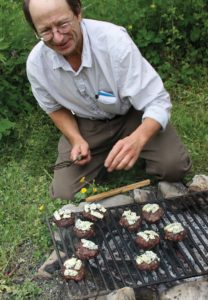 Bass cooks well-done elk burgers “for the Frenchmen who insisted they wanted them that way,” he says.

There were writers who had either helped me directly, as was most often the case — I had so much help — or sometimes indirectly, through the sheer power of their prose, or their being, or both. Who knows where the first single spark of anything begins, and perhaps it is not always the spark that is so important as the firmament into which the spark is born or tumbles. Perhaps the first chipping of stone against stone came in 2010, when I was teaching a course at the University of Montana in Missoula for the William Kittredge Chair in Environmental Humanities.

William Kittredge is the dean of Western literature. He studied with Richard Hugo, was pals with Raymond Carver and a Stegner Fellow along with Ken Kesey, Tom McGuane, Tillie Olsen, Edward Abbey — and he lives in Missoula! He’d only recently retired, and was still highly active in the community. Yet when I walked into class and asked how many people knew of him, this man who was the namesake for the class, only a few had, and an even smaller number — one, as I recall — had read him.

So I knew I wanted my writing students to love what I loved, or at least be introduced to it. I wanted to hand them that torch. It was a lonely feeling, being the only one in a room — a room of writers — who might not know of these writers and their work; and lonely, also, to see how quickly even those who once were known could fade, in a generation. In less than a generation.

I don’t know how the food concept came in. I was cooking a lot at the time. It just seemed like it would be fun. And sometimes, it was. 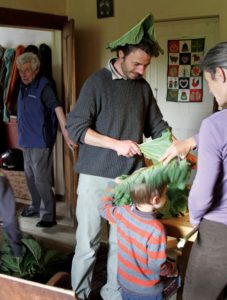 Yves Berger and family congregate during the making of a rhubarb pie.

I was working with a couple of top-notch beginning writers, one in fiction and one in nonfiction. Cristina Perachio is a chef, food, and fiction writer from Philadelphia, one of my Stonecoast mentees from the University of Maine; Erin Halcomb comes from Oregon, and is a trapper of live animals for the Forest Service. I asked them to join me because they were the best. A bit later, my youngest daughter Lowry signed on, as did fiction writers Molly Antopol and Skip Horack. The first meal I cooked was with Erin, an antelope shoulder over mesquite coals for outdoor writer Doug Peacock, who was down in Arizona for the winter. A short time later, a morel and freshly dug spring parsnip for the dying author Peter Matthiessen, on the first edge of spring at his home on Long Island.

And on we went, with various mentees hopping on and off the magic bus according to how much of my eccentricities and aggravations they could withstand or — that word — endure. Erin and Cristina hung in there the longest.

Not every writer I asked to cook for said, “Sure, come on over.” This didn’t surprise me; I certainly wouldn’t have. A lot of my female heroes said no; time being a bit more precious to them, it seemed to me, and guarded more fiercely. As if at some point in their life they might have had none. Go figure.

Mary Oliver, bless her heart, said, “The me of 10 years ago would have said yes.” But she was focusing on her work in her last days. W.S. Merwin said essentially the same. Oh, time, time, blunt thou devouring lion’s paw! Marilynne Robinson, drowning in work. Annie Proulx said yes, then no, then yes, then no — work and life. Joy Williams kindly but directly demurred. I got to tell them thank you, which is what mattered, more than the skillet. Joyce Carol Oates said yes but — wisely — only at a restaurant (the subtext was, I fear, I don’t want you in my kitchen). Admittedly, I had just finished cooking for the McGuanes, and had nearly burned their house down.

At John Berger’s farmhouse in France, beneath the cool glaciers of Mount Blanc, we talked about courage; in Madison, Wisconsin, with Lorrie Moore and Mary Gordon, still up at 4 a.m., we talked about making babies and rent control. At Terry Tempest Williams’ home, we ate elk and pie and talked about world peace, the burning West, then played dress-up in party costumes, Lowry, Terry, and I. 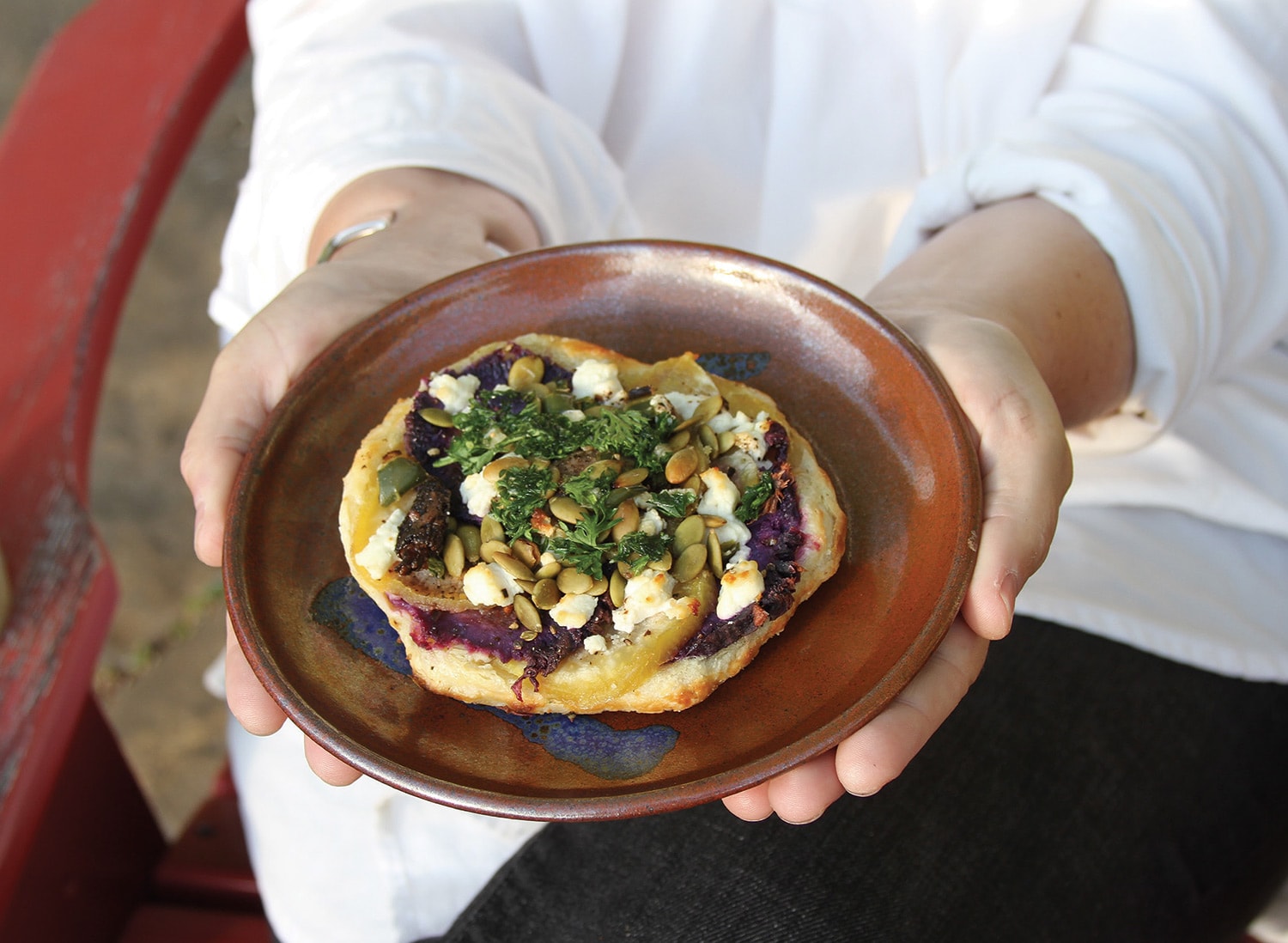 The mentees were imbued with tremendous grace in the kitchen, and culinary intelligence, but there were wipeouts. I saw to that. At Denis Johnson’s — yes, the hermit Denis Johnson — I got too shit-faced to remember much: only that we all had a roaring great time. At Tom McGuane’s, while grilling outside one fine summer day, I left the turkey untended for but a moment, during which time it ignited into an explosive golden fireball, billowing into the sky bright blue smoke, like that from a Civil War battle, which could be seen a mile away. Tom, who was down fishing in the Boulder River, came charging up the hill, fly rod in hand and still wearing his waders, certain that his cabin was burning down. It’s a little-known natural phenomenon that you can’t simply extinguish a burning turkey, no more than you could a comet; it simply has to burn itself out. We all stood around and watched our dinner diminish, crumpling slowly to a wadded-up blackened carcass the approximate size of a quail, or a small pigeon, crying, we were laughing so hard. If you ever are having a bad day and really need to laugh, just go light a turkey on fire.

You can’t bring meat into the European Union, but be damned if we were going to deprive David Sedaris and John Berger of elk backstrap from Montana’s Yaak Valley. We froze it, wrapped it in butcher paper, wrote the word “Tuna” on the outside — you can bring fish in — and carried it through security at Heathrow Airport, though it had thawed and was leaving behind a telltale splattering of red from our daypacks, like something from a Cormac McCarthy novel.

Somewhere in Eastern Montana, on our way to cook paella and chipotle-butter grilled corn for Lorrie Moore, our ice chest blew off the roof of the car, scattering food all over the lonely interstate. We pulled over and hurried along the shoulder, roadside gleaners and scavengers, dusting the gravel from the summer-fresh corn still encased in their milky husks, 21st century Joads. When we told Lorrie about this mishap, she nodded and without missing a beat said, “Ah yes, the Trail of Ears.” 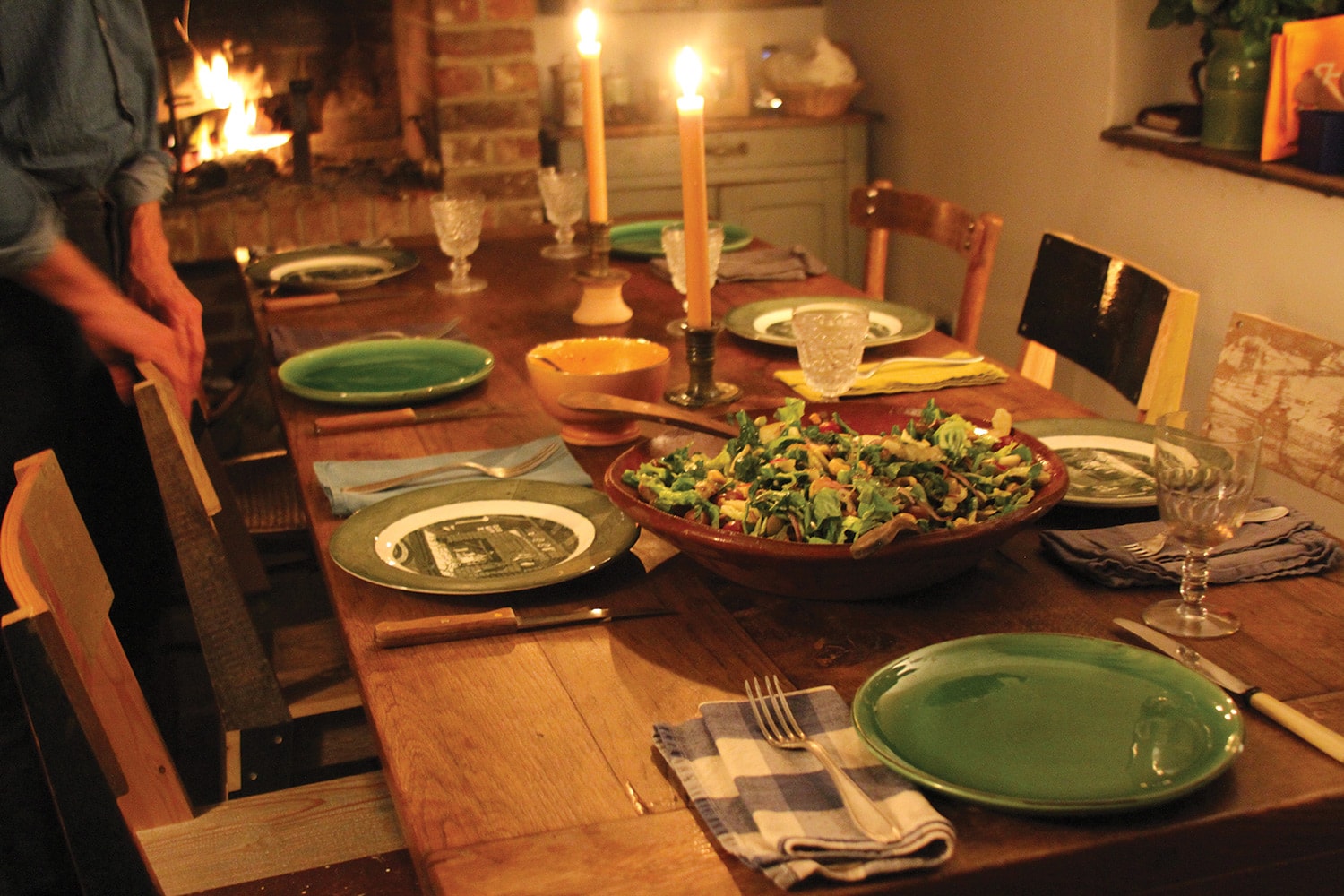 The table is set at the home of David Sedaris and Hugh Hamrick in France.

What did we discover over our four years’ sojourn — our version of the poor man’s, poor woman’s MFA? Surprisingly to me, the greats had much in common. One tends to think of artistic genius as existing in a kind of isolation, a great rarity that is different from all others. But even the hermits among them were receptive to, if not always highly active in, the idea of community. They were all extraordinarily generous.

Many of them — Gary Snyder, Peter Matthiessen, Jim Harrison — were practicing Buddhists, to one degree or another. They all possessed a space of their own, a good place to work, uninterrupted through the years — it was true enough that many of them had no nearby neighbors — and, no surprise here, they all had an obsession for work, a ferocity for the time and space, and for craft, for quality. But they still had it late into life, which I found curious. Despite being masters, they all seemed to cultivate the knife-edge between comfort and failure, refusing to be easily satisfied, if at all.

They were all still working. 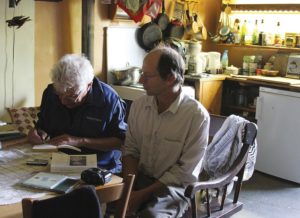 Going into the project, I had vowed to be different. It was my goal to get said the things I wanted to say by the time I was 50, and then play catch-up with that part of my life that had gone by while I had been stationed at the desk, “darkening pages,” as Tom McGuane called it.

But that was four years ago. Whether my mentors have impressed upon me the fact that one can keep on writing and still live a quality life, or if it is something larger and more mysterious than that — a return of the desire to write — it has returned, and with force. Water is flowing into, and from, the spring again.

A lot of them use typewriters, at least for correspondence. A significant number of them have survived substance abuse. They have rebounded, are stronger than ever. It hardly seems fair. They all had a good sense of humor, and — I would never have guessed this — seemed happy. Beyond contented: happy.

Some of my heroes were already gone. John Graves, by weeks. I’d been to his 90th birthday party in Texas’ August heat. Two years later, I would take Lowry to his memorial. Eudora Welty, whose lawn boy I was, briefly, in a fevered fantasy that shocks and fascinates the middle-aged me now. They’re old writers. I wanted to see them again, and to study the difference between then and now. I loved what I saw and found and hoped to become one myself some day.