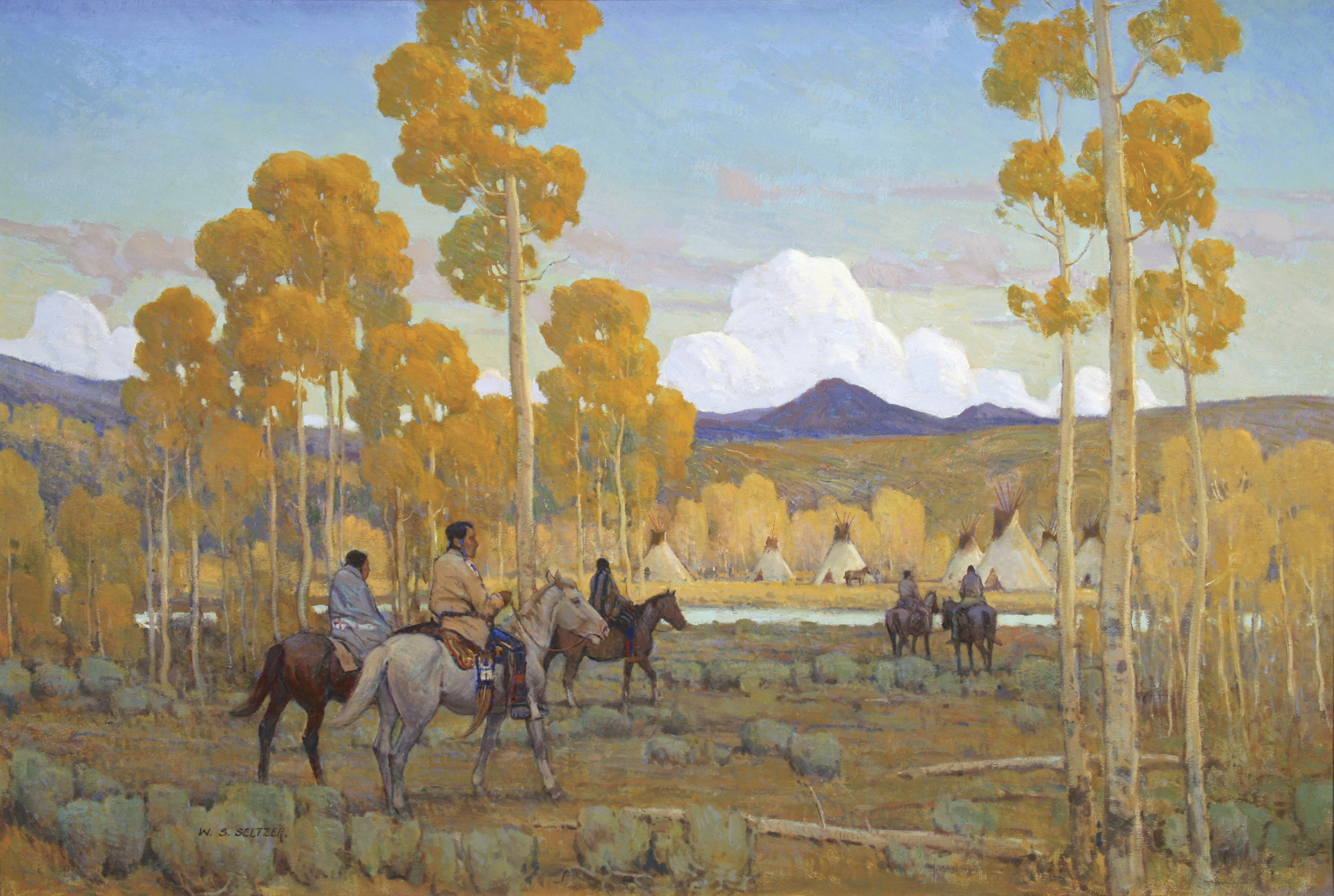 23 Jul Artist of the West: The Timeless Scenes of W. Steve Seltzer

IT IS TRUE THAT W. STEVE SELTZER GAINED HIS REPUTATION as an artist with many of his Western scenes, yet he doesn’t consider himself a typical Western painter.

Seltzer’s topics range from the figurative to expansive landscapes, from gardens to historical Native American scenes. For him, it isn’t a single theme that drives him to paint.

Instead, he says, “My first interest is not subject matter. What I see has to suggest some kind of design to me, a distribution of colors, values and shapes in a way that lends itself to a compelling composition.”

And he sees those elements in a vast array of themes. Reaching beyond the subject to snag the underlying universality of emotion, Seltzer weaves colors with a boundless and deep understanding of light and dark, contrast and tension, so that we are always engaged, always following Seltzer’s master hand.

The brim of a hat, the light on a figure’s cheek, the swirl of petal, or moonlight reflected in a pool of water all simply, yet with the complexity of experience, transport the painting from merely interesting to an intuitive adventure.

“The difference with my work and other Western painters is that Western painters tell a story, like an illustration,” he says. “I’m not trying to tell a story other than the larger universal story. Instead of one occurrence, I point to a bigger story, maybe a struggle for survival. Man against the environment, but not a specific historical incident.”

With the emotional palette of a true Impressionist, Seltzer aims for the heart. The figures in his work aren’t meant to portray a specific person, but are intended to reveal a core value, not mere sentimentality.

“I’m not a portrait painter,” he says. “I want the figure to have a wide appeal and a quality so that anyone can relate to it. It should conjure a memory about the viewers, or their daughter or a friend. The painting should evoke an emotion that brings back a memory.”

Seltzer’s unique style and vision is a mixture of his own sense of beauty as well as the influence of his grandfather, the well-known painter O.C. Seltzer, who painted alongside Charlie Russell and created more than 2,500 works of art, including a series of miniatures of Montana’s history for a wealthy collector.

“I tried to emulate my grandfather’s style for many years,” he says. “It piqued my interest at any early age. I wished I could do that and tried to paint like he did.”

He can remember being 7 years old and trying to draw.

“My dad wanted to be an artist, too, and was always drawing,” Seltzer says. “When I started doing watercolors he’d occasionally help me. He’d watched his father work and knew a lot about the process.”

Then Steve transitioned into oil painting and focused primarily on Western scenes.

“That was the thing to do at the time,” he says. “But in the last 17 years or so I’ve been doing other things. At first blush some people think I paint like my grandfather, but I see so much difference.”

“I like the more stylized, designed painting more than a very literal translation of nature,” he says. “The Western paintings I do are primarily based on the elements that are there. I try to use them to create a design I think is beautiful.”

Take for example the painting Almost Home which recently sold for a record price at the Coeur d’Alene Art Auction in Reno, Nevada. Although there is a reference to a historical time period with Native Americans on horseback, the first thing we notice is not the people but the landscape. Twilight clouds pillow over peaks filled with promises; trees like picket-fences protective and safe. And the colors: tranquil and cool, yet warm and reminiscent of those long quiet moments, reaching for familiar things.

Stuart Johnson of Settler’s West Gallery and partner in the Coeur d’Alene Art Auction, says Almost Home is a marvelous painting. “I’m glad it brought a larger price because it deserved it.”

While some artists stay on their career paths, keeping to the style and genre that brought them success, Seltzer is continually learning and growing.

“I like to think Steve has been on a continual progression of making his work better, setting new goals and expectations,” Johnson says. “He’s enjoyed a lifetime of success in his field. People will look at what he’s producing and will continue to acquire his paintings.”

Johnson admires Seltzer’s ability to concentrate on the validity of a painting, rather than to take an anthropologist’s approach.

“He doesn’t focus on the details,” Johnson says. “Yet the scenes he puts forward are believable, very loyal and true in the representation of the subjects he paints. And he’s equally adept at approaching his impressionistic paintings.”

Seltzer started painting full time when he was 29, about 40 years ago, and was in the very first C.M. Russell art auction.

“I was 23 years old and I’ve been in every one since,” Seltzer says. “I was a terrible artist back then, but so were a lot of other painters. I sold two 18-by-25 oils and got $90 apiece for them. I was really flying high. I was lucky and able to grow with the art phenomena. Western art was in its infancy at the time. It would be difficult for an amateur to jump in now. There are too many decent painters out there.”

Even though he’s worked in watercolors, Seltzer paints strictly with oils these days.

“I like oils, I’ve tried everything but I like oils, it’s the most versatile medium,” he says. “I want to end up with a painting that has a certain kind of surface quality, something that separates it from print.”

In developing his surfaces, Seltzer builds up subtle layers, often taking six months to finish a piece, stopping between sessions to let an area dry before adding more to it. Rather than following a preconceived plan, he lets the painting lead him.

Currently he has a large landscape up on his easel in his Great Falls studio.

“I’ve had it up for a couple of months,” he says. “It’s not as realized as I want. I’ve been looking at, studying it. It needs some adjustment in the relationships. It’s now all about me, mentally figuring out what I need to do to make this work. Nature has taken me as far as it can.”

Annie Thom is a longtime collector of Seltzer’s work and has been on the board of the C.M. Russell auction for the last 12 years.

“The first painting we bought from him was a scene of hay bales in the snow, which is just lovely,” Thom says. “We have amassed a pretty diverse collection of his work over the years. We also have a couple of his grandfather’s paintings.”

“The auction draws artists and collectors together,” she says. “One of the stellar parts of the auction is the atmosphere where you can learn about the artists and they teach you as well. Steve is a wonderful educator, in that respect.”

For Thom, it’s the way Seltzer can capture a feeling so strongly she can’t look away.

“In his Native American paintings, you can visualize them on horseback at the watering hole,” she says. “Something about his work engages your eye. I just get drawn in by his paintings. One of the ones we have is Carol [Seltzer’s wife] in a garden with a border collie. She’s bending over a flower [bed] and you’re there in the garden with her. The colors are soft. The feeling is there.”

The Thoms also have several of Seltzer’s beach paintings.

“Because they’re Impressionist paintings, everyone responds to them, without knowing whether they’re East Coast or West Coast beaches, which are very different. But it’s the feeling of the water that keeps you coming back to the piece.”

Above all, Thom believes that Seltzer is a major player in the art world.

“He’s such a detail-orientated person and so knowledgeable about art,” Thom says, “I think he’s going to go down in history as one of the best painters of Western art.”

Freelance writer and author of three books, Michele Corriel is continuously fascinated by the creative process, what makes art and how it inspires the rest of us. 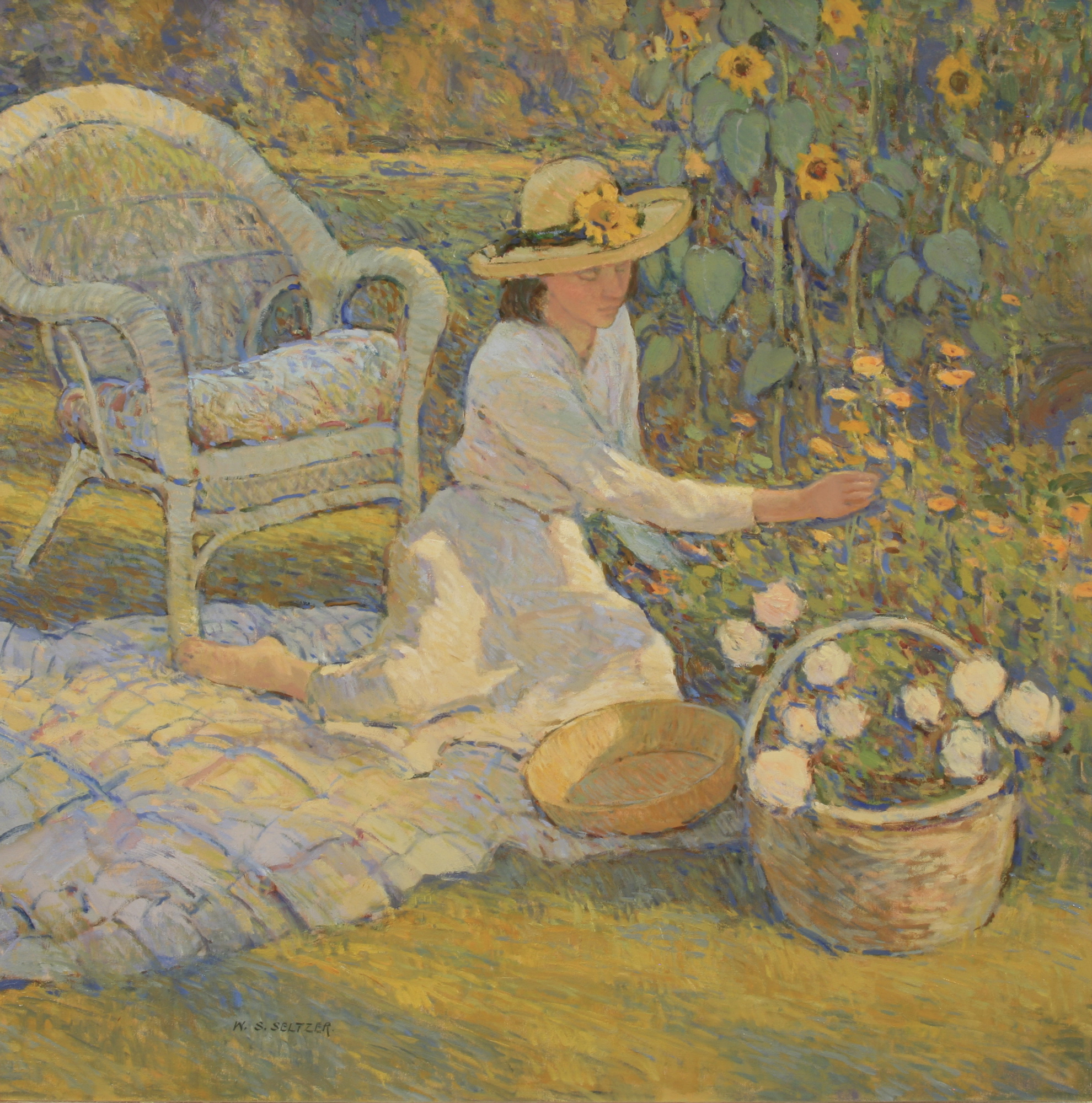 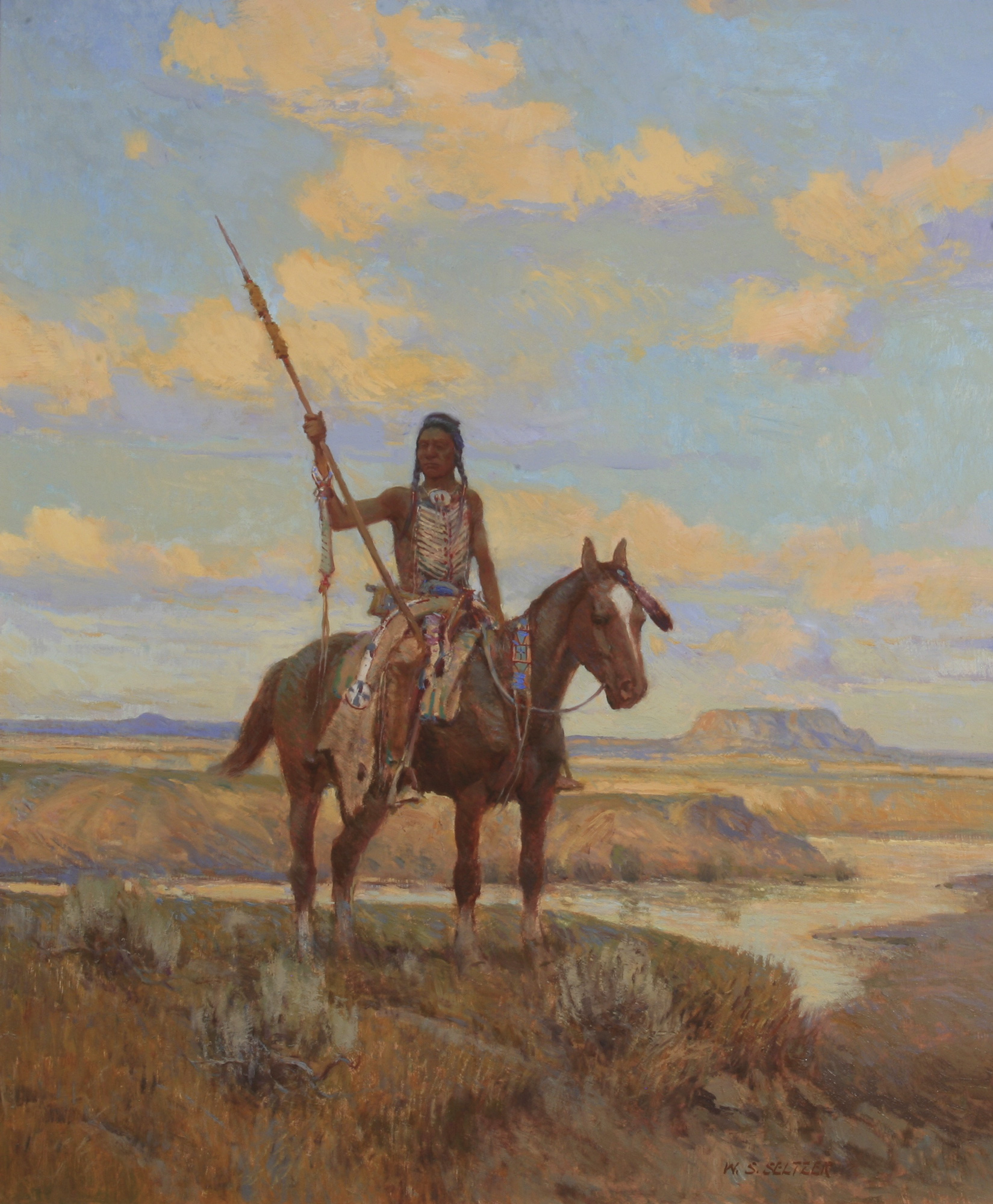 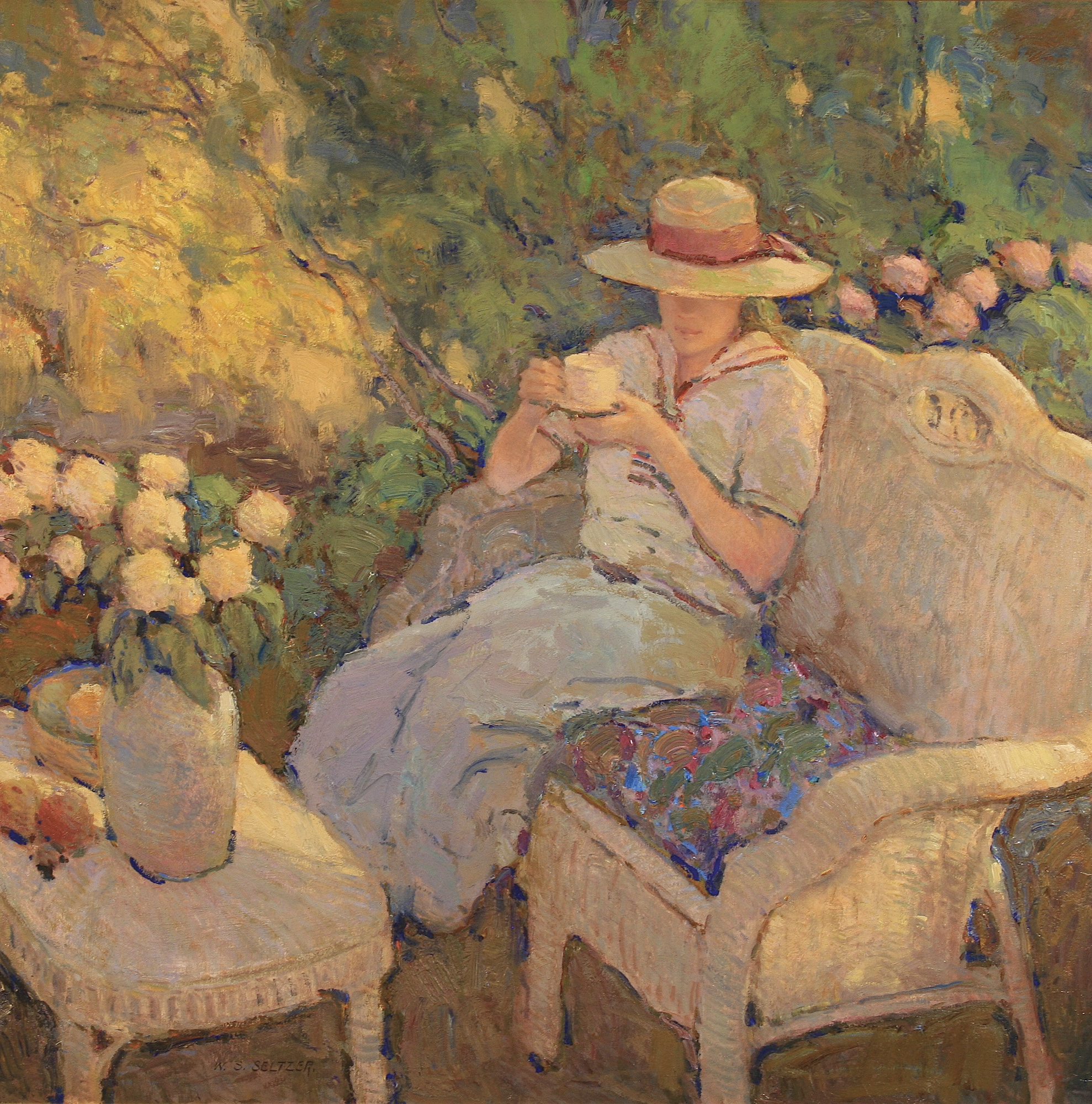 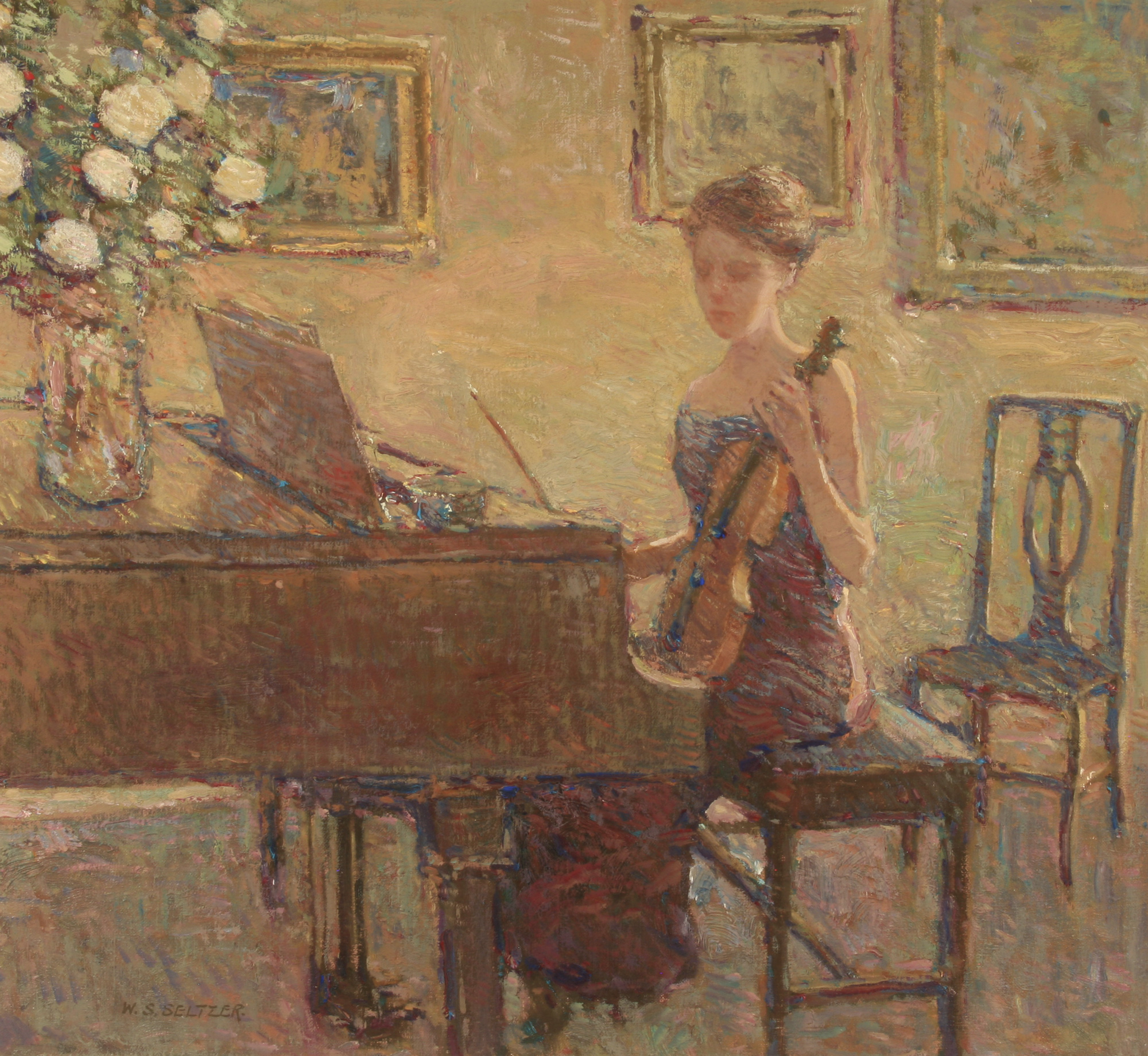 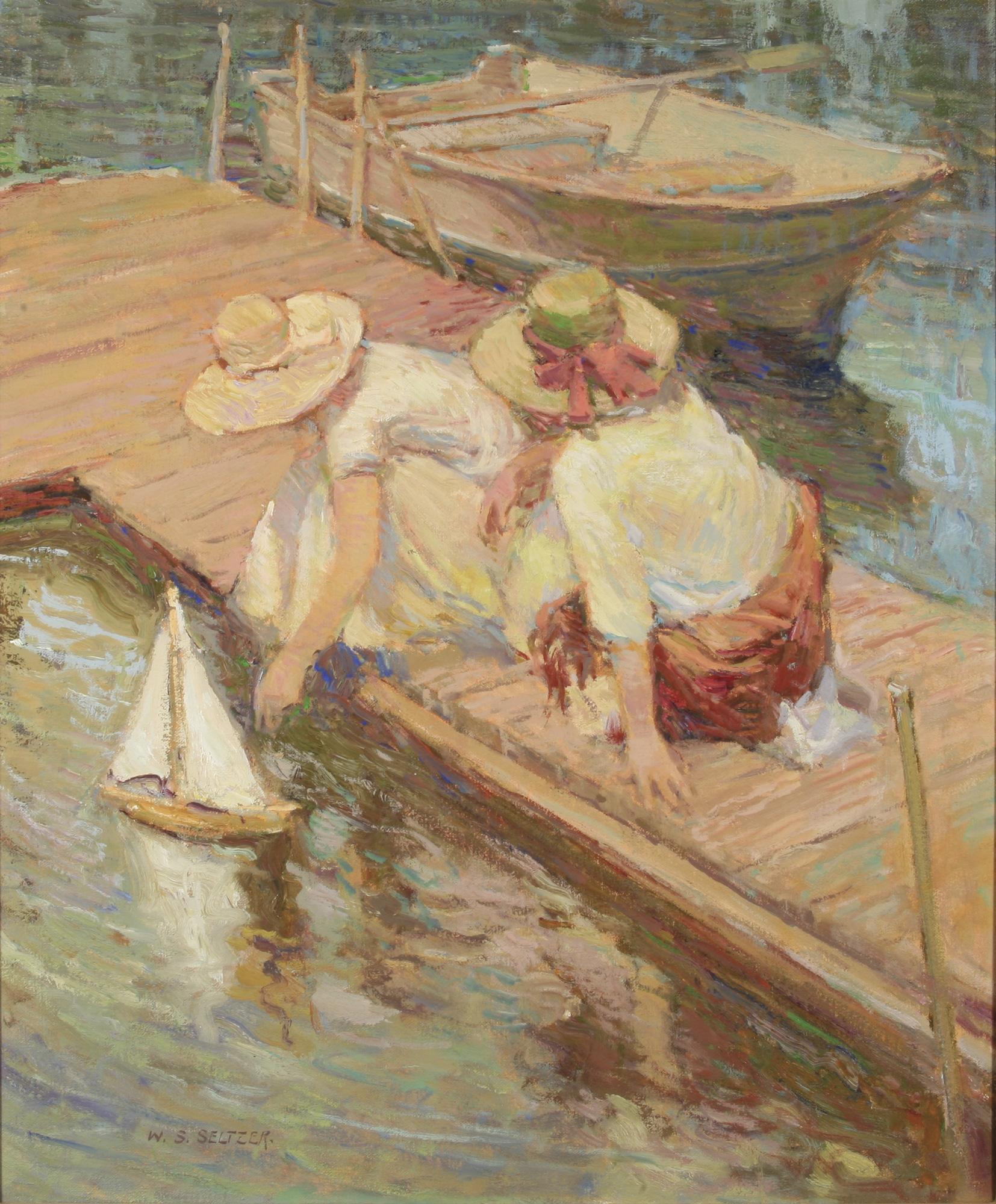 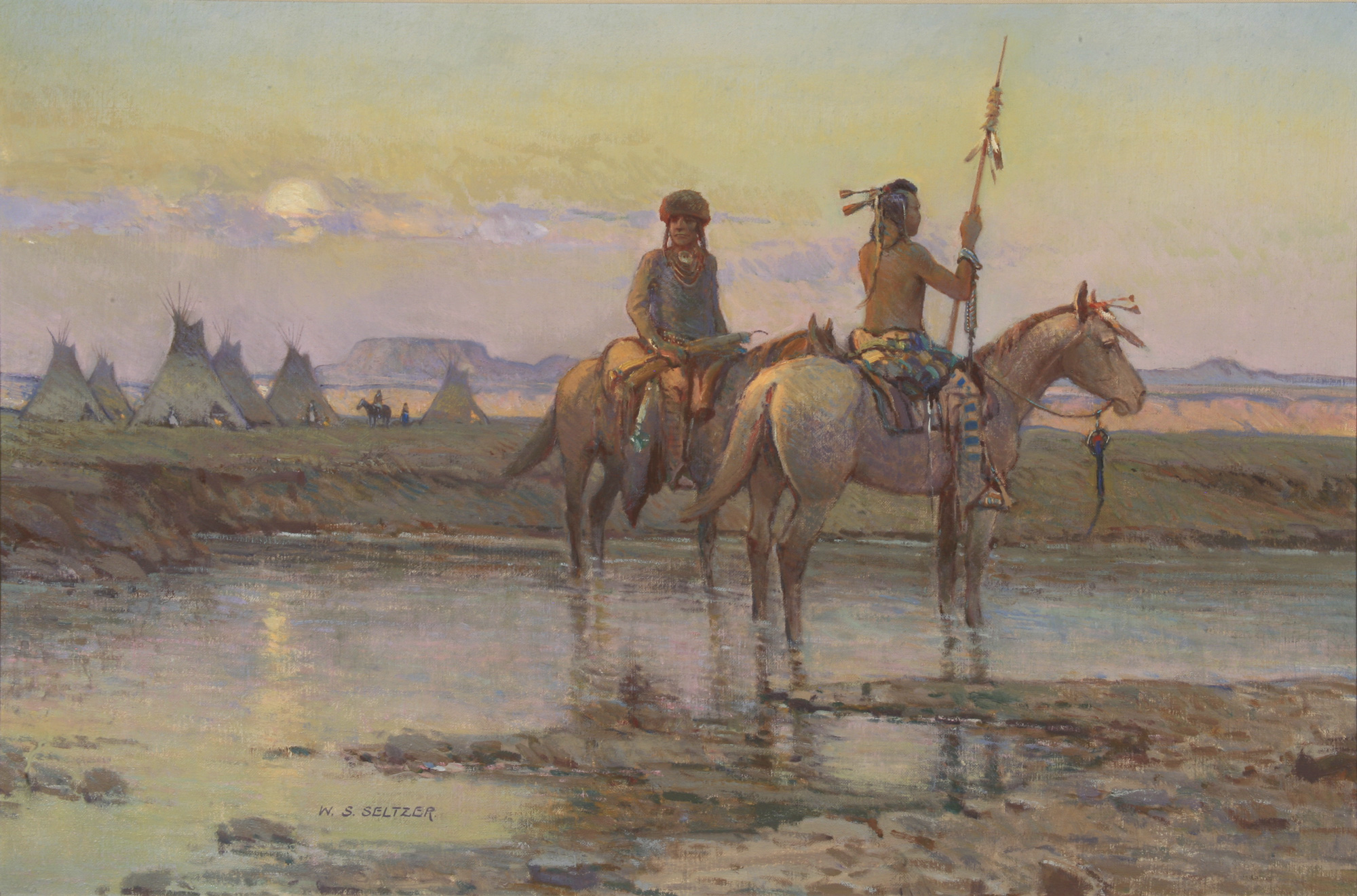