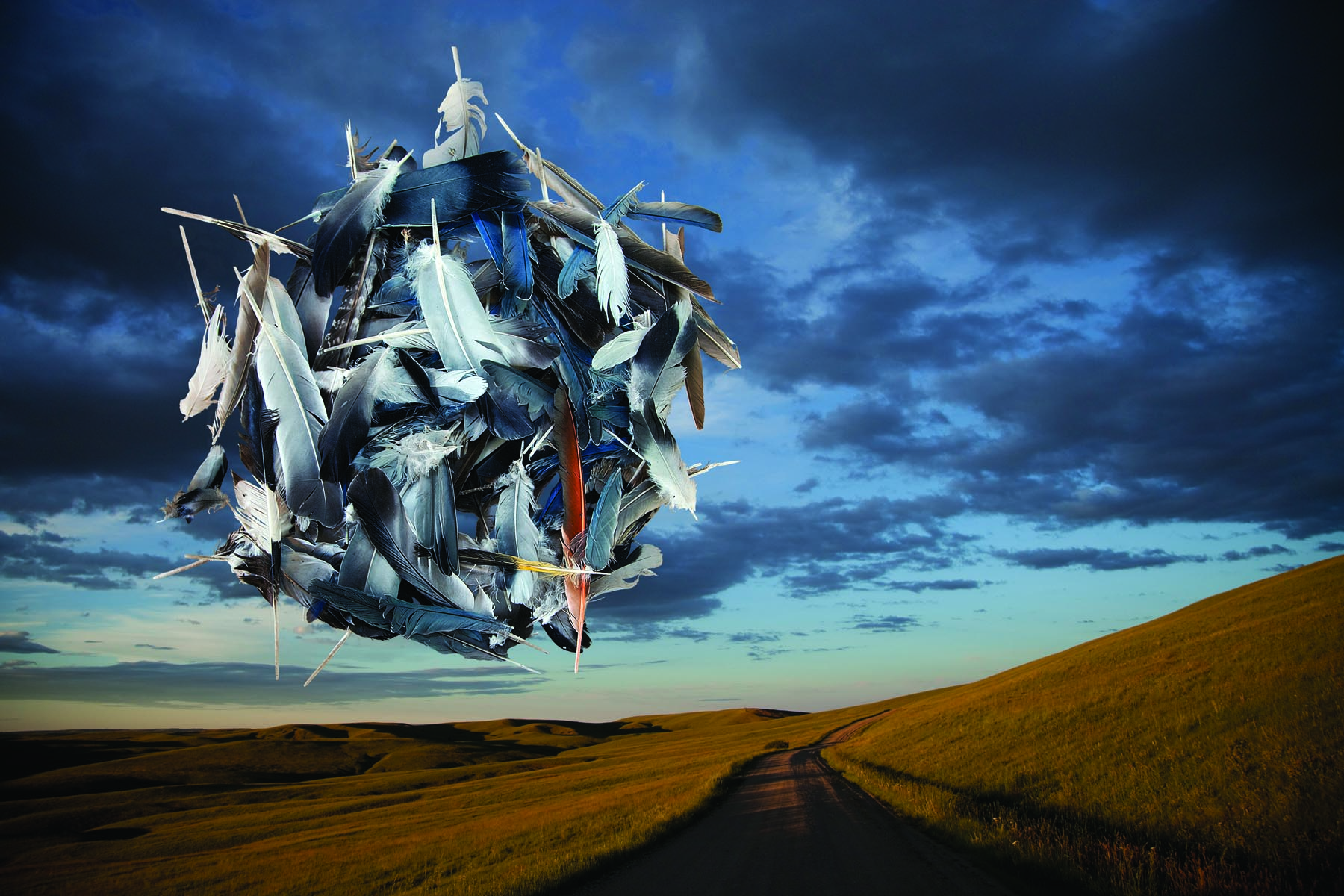 26 Aug The Symbolism of Jean Albus

COLLECTED BITS OF BONES AND SKELETONS guard the door to Jean Albus’ studio. Abandoned birds’ nests crowd a nearby table while doll parts, feathers, wasp paper and a dress shape made of chicken wire populate the counters. These remnants, combined with complicated patterns and images, make up the strands of voices in Albus’ photo assemblages.

On a nearby workspace her piece, Magpie, waits to be framed. A large floating dress shape composed of twigs, branches, bones and feathers hovers over a dark but lush landscape with a curving dirt road that seems to run off into the horizon. The figure embodies all things dispossessed of their original places, rising above the land.

Albus’ work reflects not only our physical place in society but our roles in it as well. Although the objects are placed specifically into a composite, they react naturally with the landscape. Ultimately, Albus allows us to linger at the border between inner and outer worlds.

“My photographs of the landscape reflect my own relationship and how I feel about it,” she says. “I feel safe and at home in the landscape. It teaches me everything I need to know.”

She gets up from her screen — past the skirt made of chicken wire and the window ledge filled with glass jars and bottles — to go outside. She heads out to the field where she’s left a dress on the ground for about a year now.

“I never go out thinking I’ve seen it all,” she says, striding under the warm sun just outside Bridger, Mont. “I see beauty. And it’s not threatening to me, including dead things, rocks, moss, grass, tree bark, water. And the sky is my very first love.”

Albus found this dress, like many of the dresses she uses, in a thrift store. It may have been fancy in the 1970s, with beading and gold flower buttons. In among last year’s mullen stalks, the once-yellow dress is nearly camouflaged. It is as if the earth is dressed in fabric.

Flattened against the rocky ground, seeds gather in the gullies of the bodice. Lacey ruffles of grass settle in the seams along with scattered starts of weeds. Albus stands over the dress with her camera to catch the decay in place. Then she picks it by the edge, careful not to disturb a thing, and pulls.

The sound, a tearing, is at once completely natural and wholly foreign: the ripping of material from the ground, from where it’s becoming, changing from a thrift store thing to part of the land. Detritus at its highest.

Standing back once more, she snaps a shot of the outline on the ground. Brown, bare, rocky soil, flat like a shadow against the green, lush land.

“Oh, this is great,” she says, walking back to her studio with the stiff fabric held high. “Look at the sunflower seeds in there.”

Catherine Eithier, owner of the Catherine Louisa Gallery in Billings, represents Albus’ work and is amazed by how many people are drawn to her photo assemblages.

“I have a hard time keeping her work in the gallery,” Eithier says. “People really respond to it. Not only can they identify so well with the Eastern Montana landscape, but the dresses she represents in her work touch on a nostalgia that resonates with people.”

Eithier is excited by Albus’ work because Albus is so passionate about it.

“And she’s so prolific,” Eithier says. “She’s always moving on to the next thing, envisioning things. While some of it takes so much time, when she lets the dresses go through the seasons to change and evolve, there’s so much commitment in that.”

Eithier has found that women, in particular, find the images not only powerful, but empowering.

“They identify with the imagery,” she says. “It’s almost as if they’re left speechless.”

To Eithier, the images allow her to experience each piece with her own narrative.

“They’re ghostly to me,” she says. “There’s something left out of each image that immediately makes me want to know the rest of the story, or bring my own story into it.”

Once back in her studio, Albus picks up a 3-foot long pair of sandhill crane legs, the leathery feet cemented in death, sharp claws reminiscent of a pterodactyl. These are the things she finds walking in the landscape; like a scavenger, she knows its purpose is only a few thoughts away.

“I’ve loved taking photographs, for forever,” she says. “But about eight years ago I discovered Flickr and that was very encouraging for me.”

She began posting her photographs and people loved them.

“I had a mannequin and started taking interesting pictures with it,” she says. “Then I got a studio in Bridger, in an old building, and I dug this old prom dress out of a box.”

The dress, for Albus, reminded her of a photograph she’d seen of an old woman next to a pretty dress — and all the emotions that went with an image like that: Was the woman remembering when she wore dresses like that? Was she thinking she was still that young girl? Is she still full of possibilities?

“That image just stuck with me,” she says. “And I started photographing the dress, and then me with the dress. When I found this old blue dress, that was the beginning of the dresses in the landscape series.”

At first they were straightforward photographs of the dress in different environments and then they became assembled photographs, more like models placed in various environments.

“I thought, how can I make this more interesting?” she says. “I laid the dresses on the ground and started doing things to it.”

The symbol of the dress is a personal one for Albus.

“My mother made all our clothes,” she says. “And that blue dress, it had the shape of those dresses she’d made. Short sleeves, a plain bodice and a gathered skirt. So in a sense they’re all autobiographical. And they all have a sense of innocence to them, something that feels iconic to me.”

In her piece, Hard Places, the white dress, its print barely visible,  is weighted down with rocks, situated in an outcrop of lichen-encrusted stone. The dress, left outside, weathered, unable to move, struggles within the confines of the weight, shifts and changes. Although it is still dress-like, it is also a product of all it has gone through and no one will be wearing it anymore.

“This has been a vehicle of expression for me,” Albus says. “Reflections of what’s around me, what’s going on in my life. At times I think I’d like to be rid of the damn dresses, but they’re so beautiful once they’ve been out in nature.”

This summer, Albus has two pieces in the surrealist show, Un/conscious Bent, at the Yellowstone Art Museum (YAM) in Billings. Bob Durden, the senior curator at YAM says that although it’s difficult to define Surrealism 100 years since the Paris exhibition, Albus’ work seemed to be a good fit for the show. He first came upon her work when he was at the Paris Gibson Art Museum in Great Falls, presenting her first solo exhibition there.

“I recognized in her work a unique perspective of the high Western Plains environment. It’s a part of the state is often overlooked,” he says. “She captures the subtleties of the landscape, by photographing the same place over time, while bringing a new attitude to it. The way she overlays the other images is where she forms her narrative, the juxtaposition between the handcrafted and manmade with the natural environment.”

Albus’ photo assemblages work because she’s able to find images that are both specific and universal, like the dress, the sky, birds, branches and bones.

“The work is open-ended enough that anyone can decipher what she’s trying to convey and what the narrative stands for,” Durden says. “That’s a sign of interesting work; it allows the viewer to complete the dialogue.”

Which leads to interesting possibilities, including that a viewer can reject the visual outright because he doesn’t understand it.

“But Jean Albus connects with the landscape, by adding personal items; that’s where the conversation becomes what the artist is trying to say with that intersection of ideas. It’s also incredibly personal, sincere and, in a way, humble. For Jean, the garment is self-referential. It’s not just about self, but fragility of the human spirit and it conveys, over time, a resiliency. The human spirit can endure a lot, it’s transformed a lot.”

The idea of transformation takes Albus’ work from merely an image to a narrative. 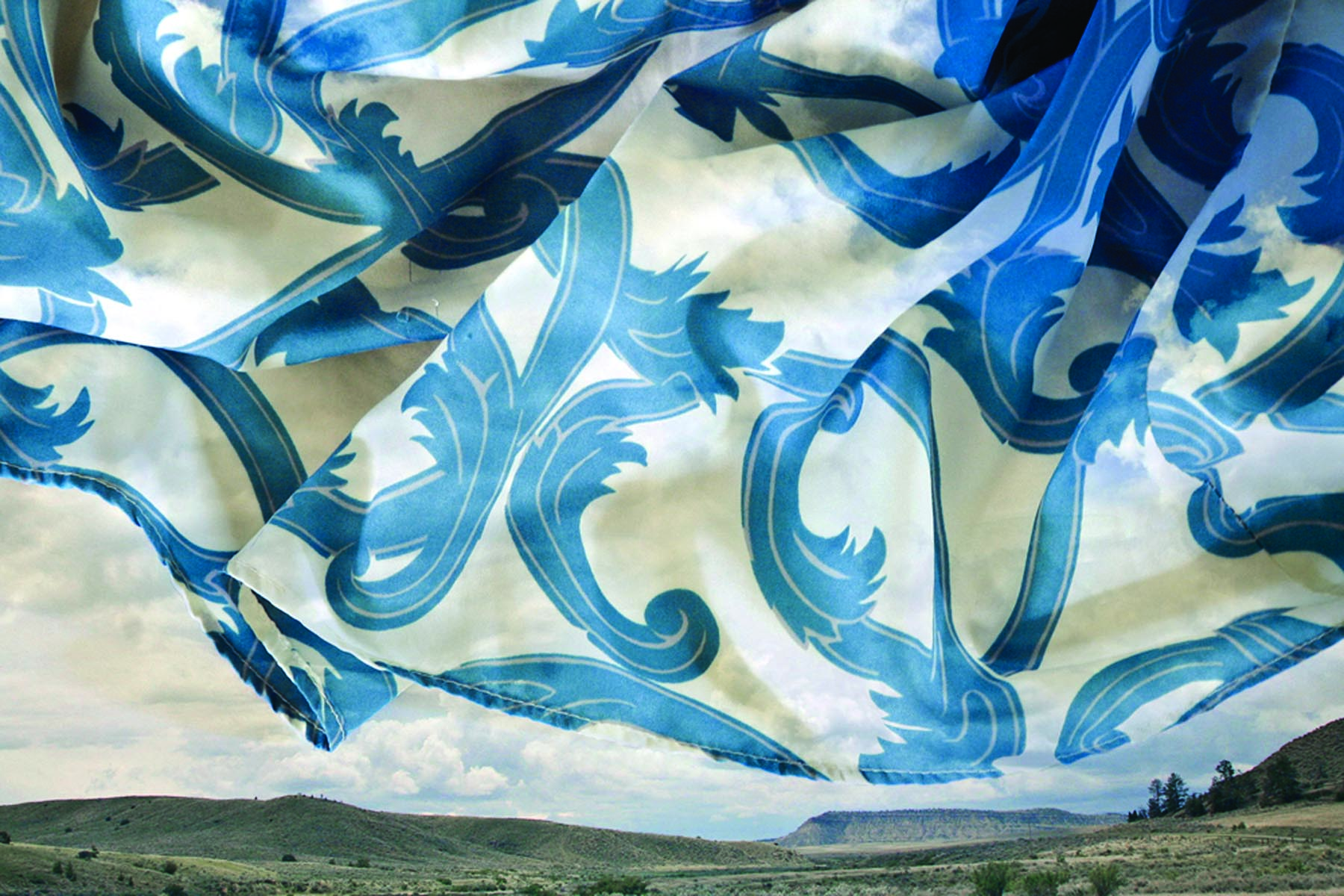 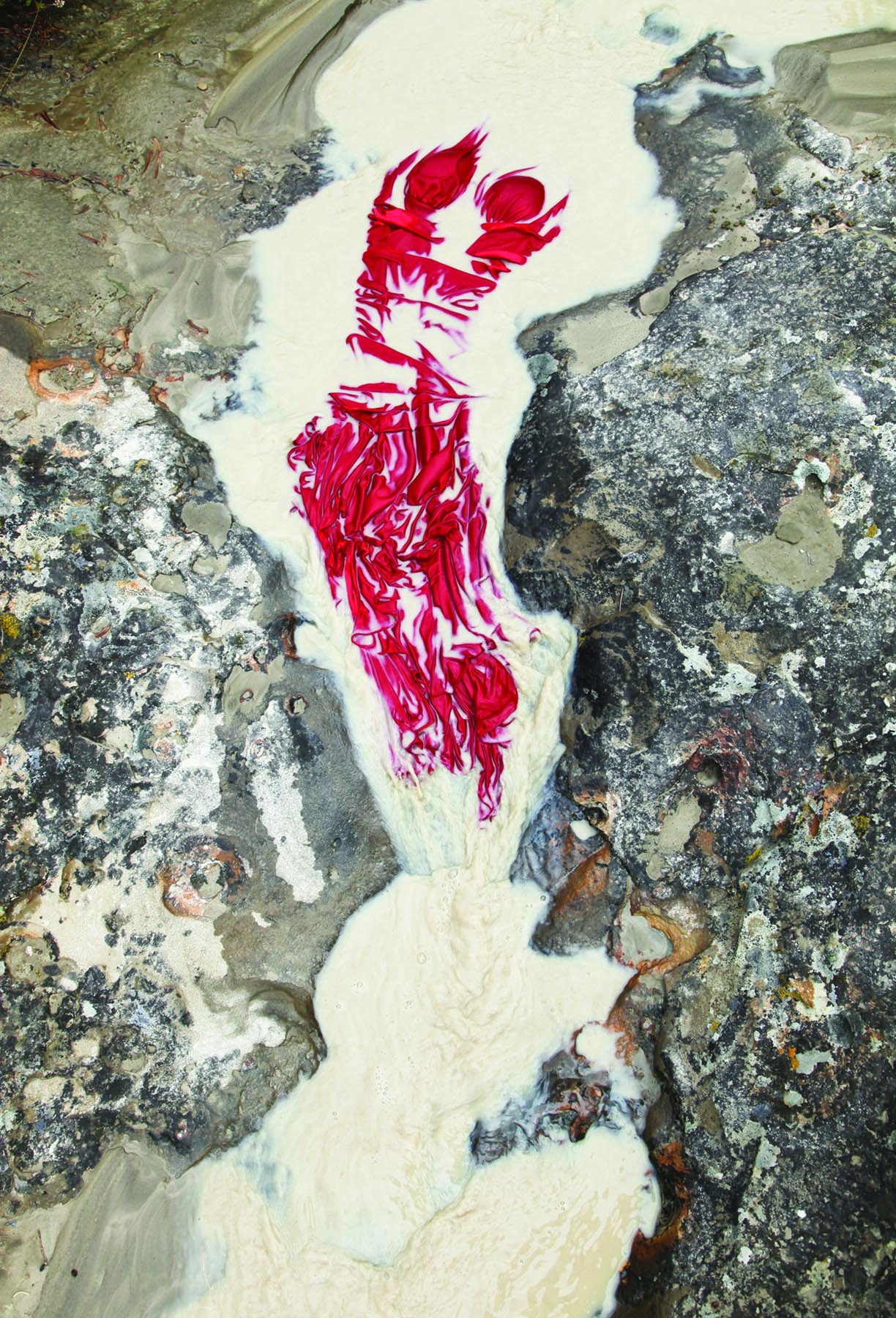 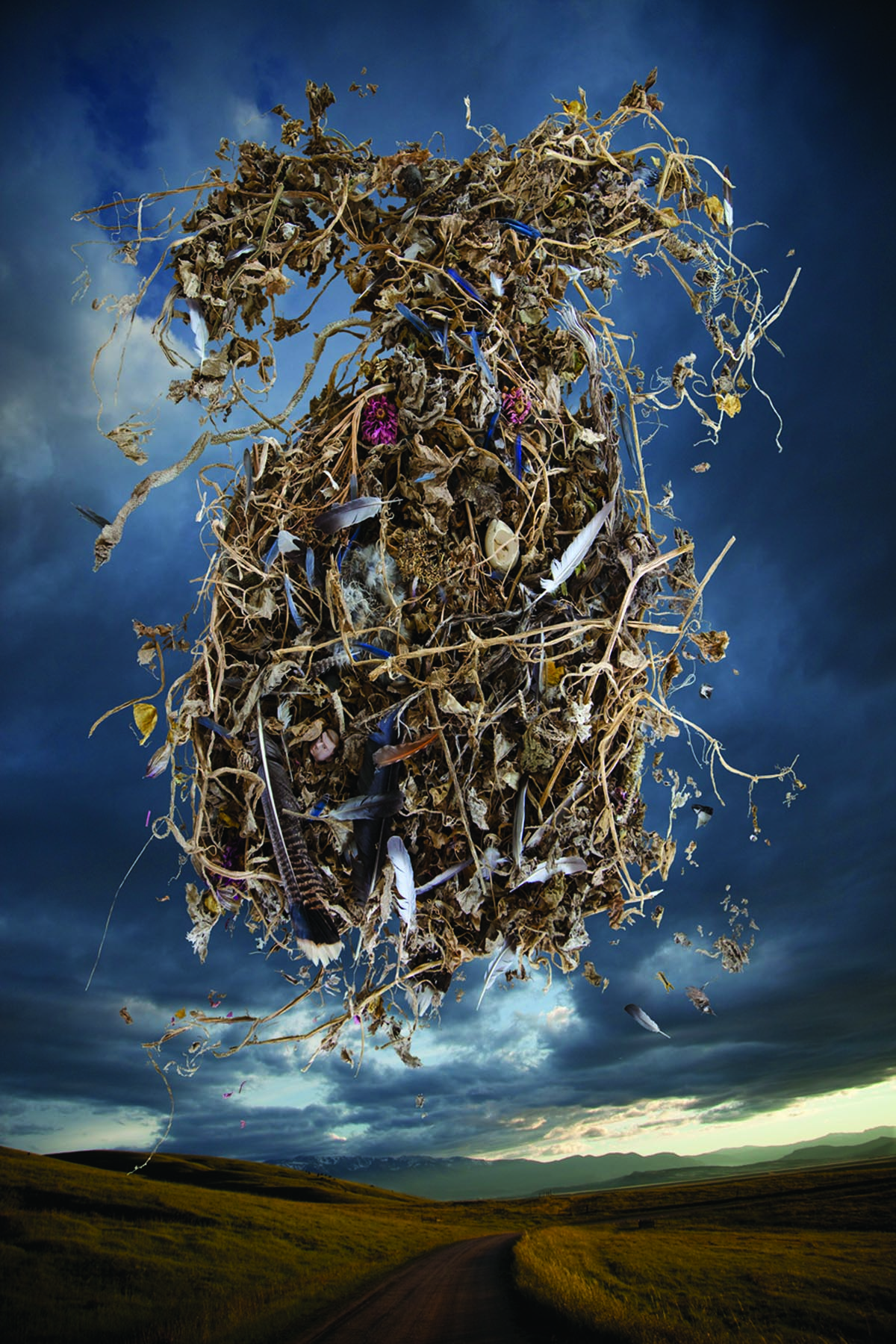 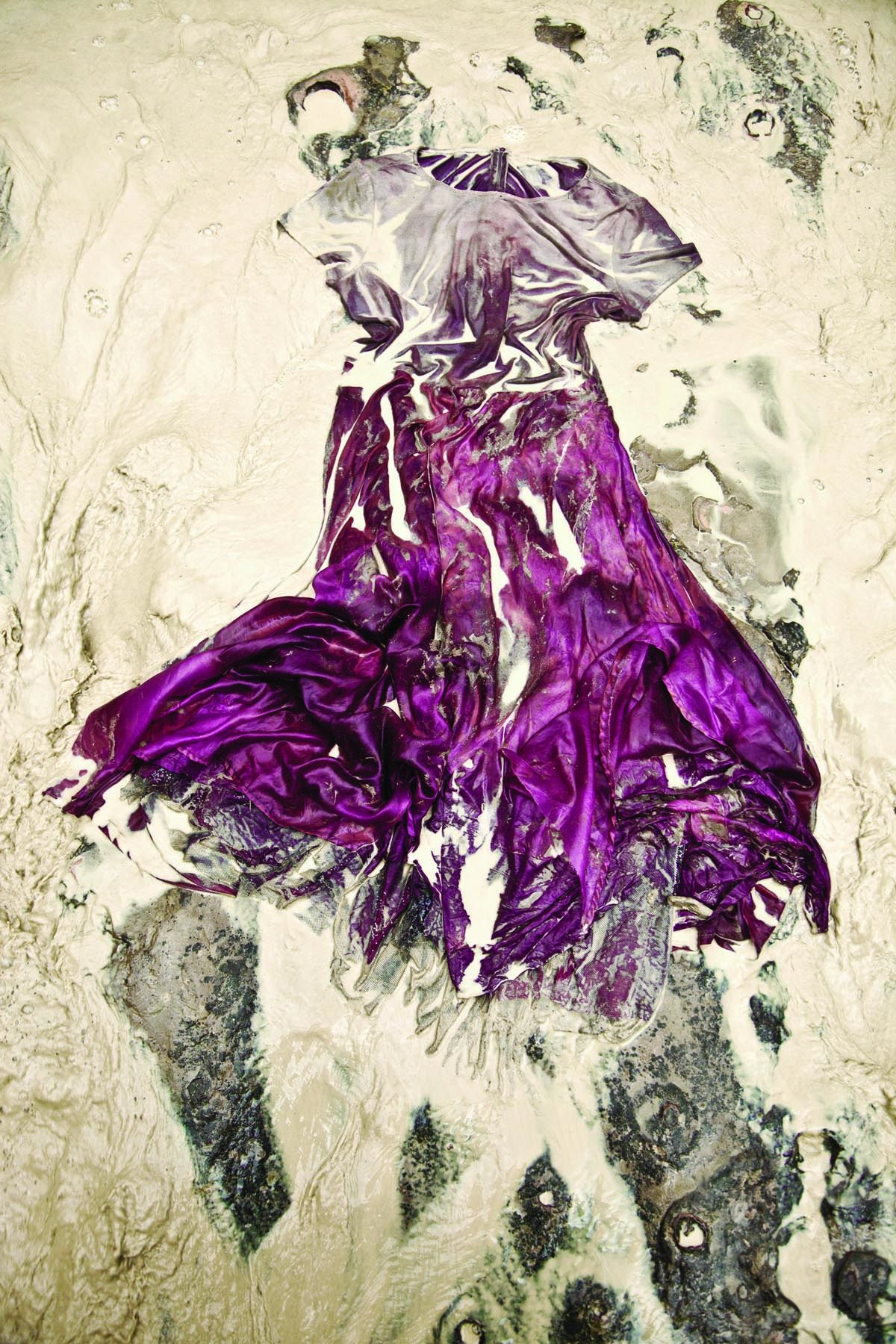 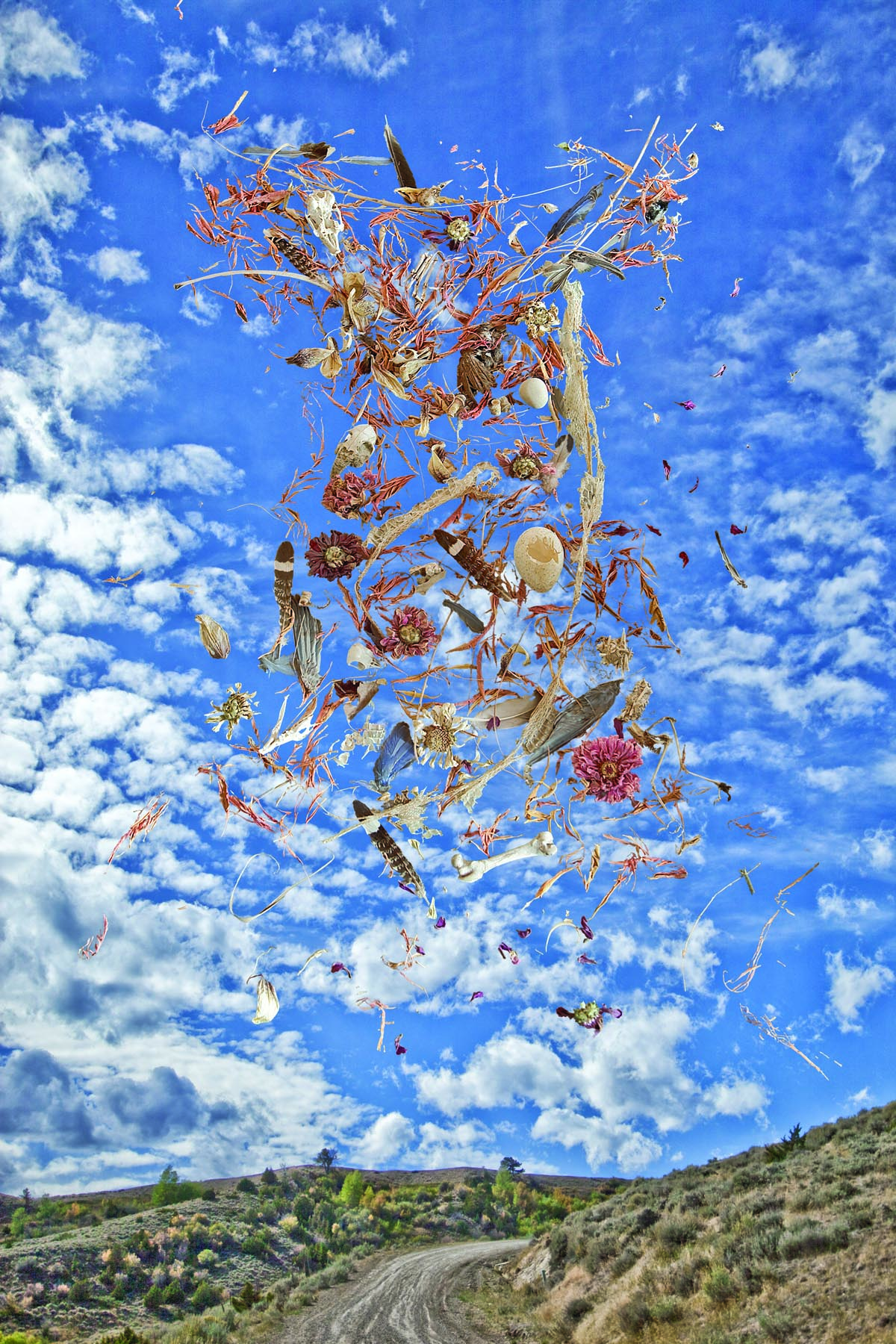 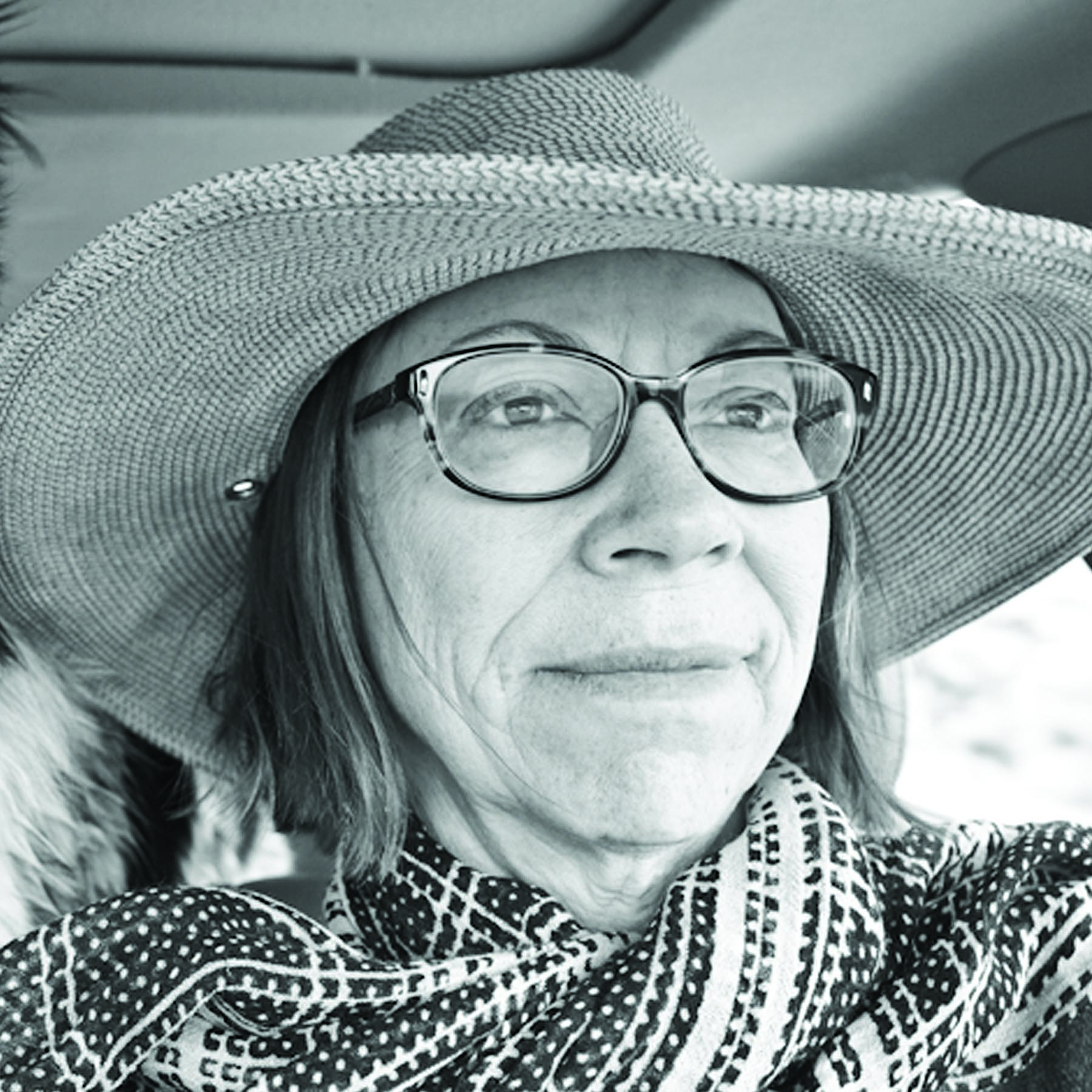 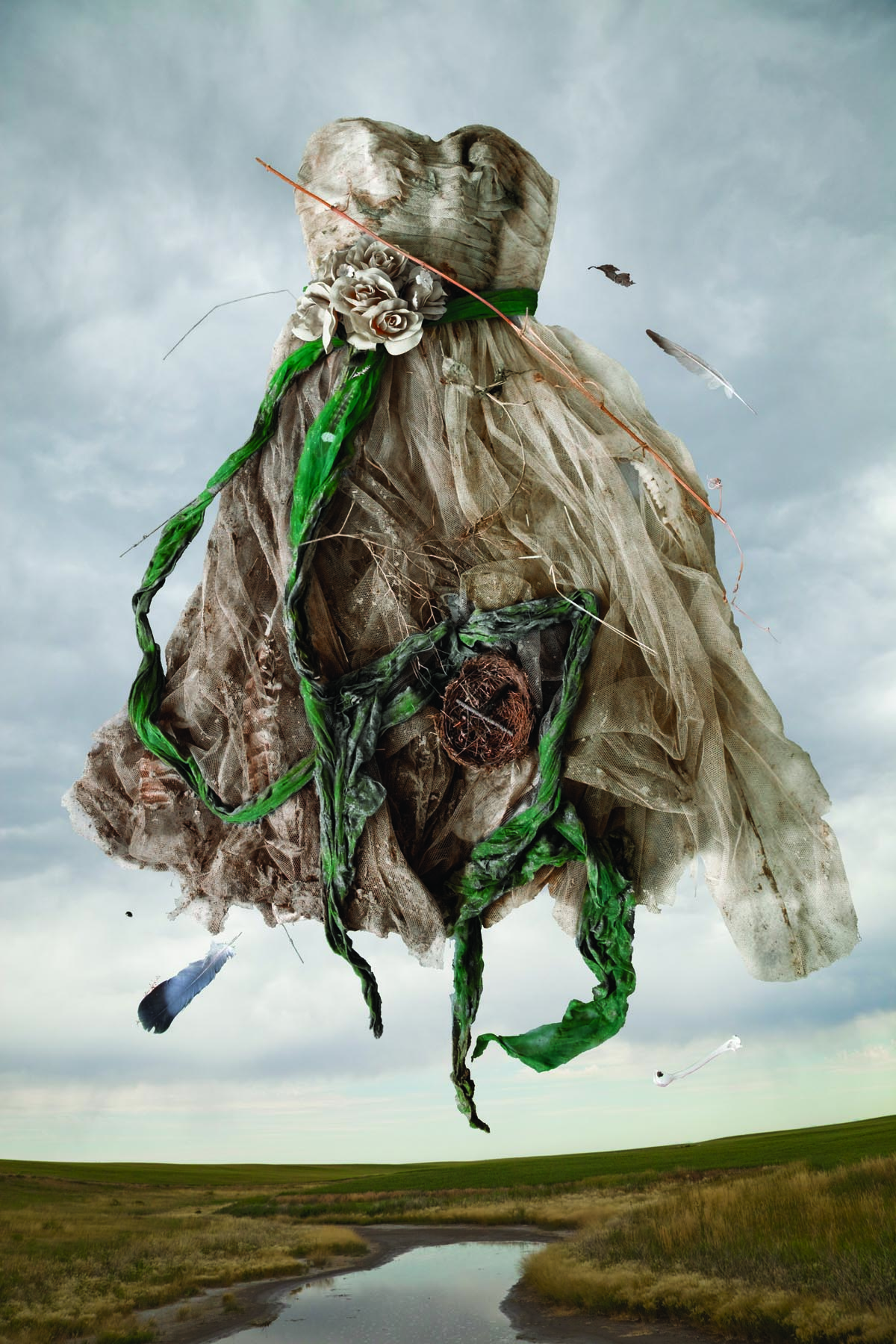 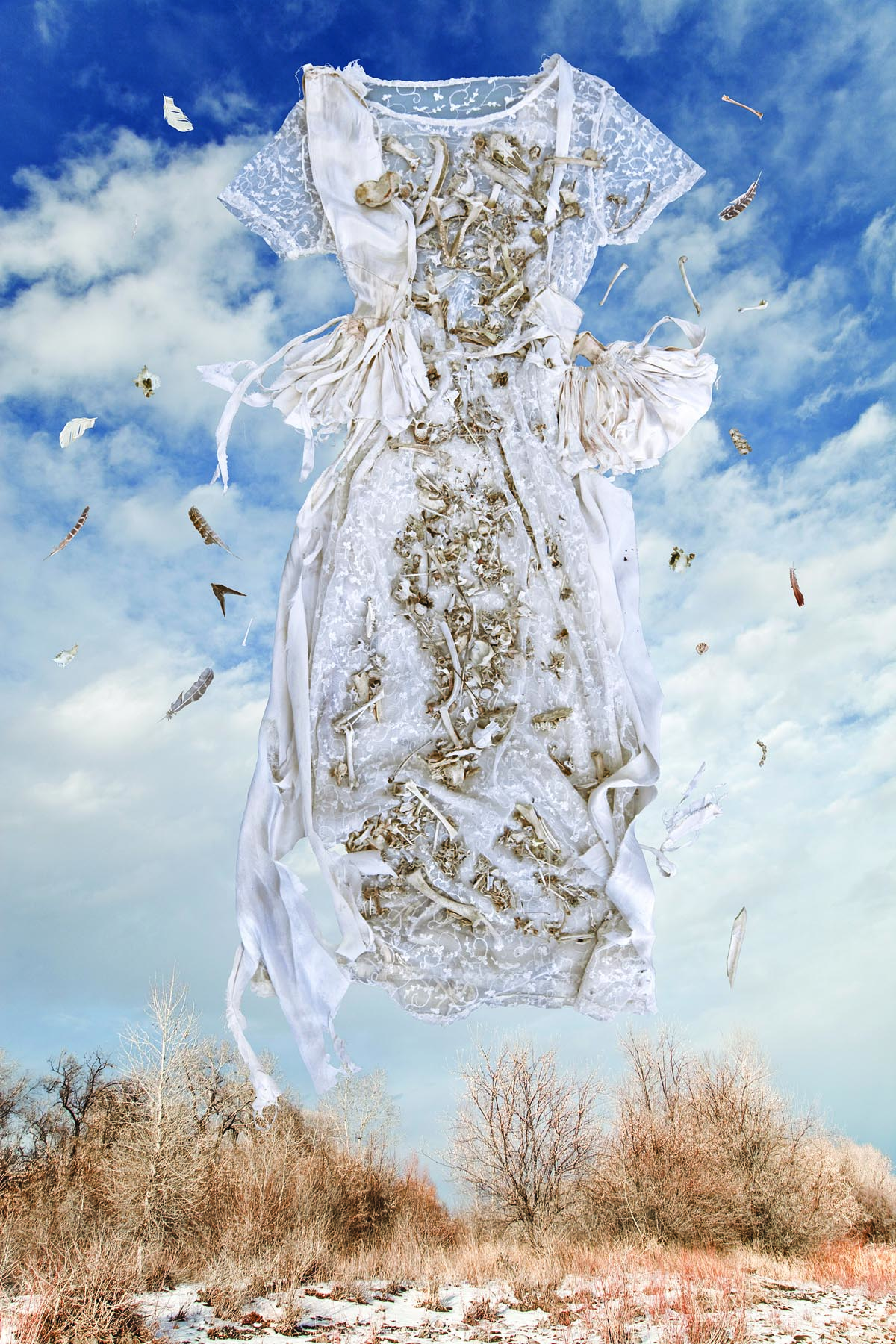