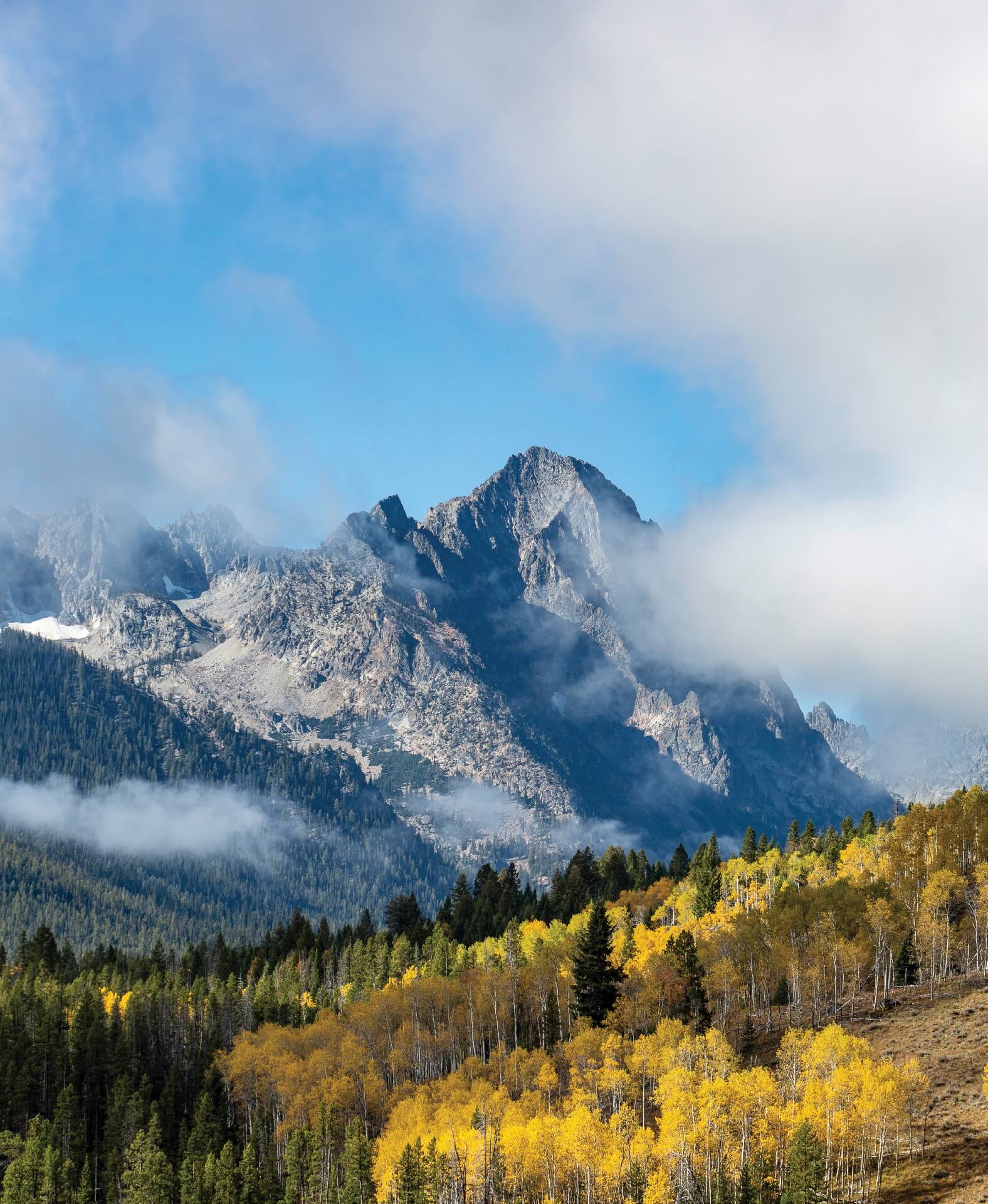 Fall foliage is not one of the Sawtooths’ most prominent aesthetic features, but aspens near peak color provide a superb foreground complement to Horstmann Peak (Elevation:10,470 feet).

For connoisseurs of rugged, alpine landscapes, the Sawtooth Mountains of central Idaho are unquestionably the crown jewel of the Gem State. Michael Lanza, a regular contributor to Backpacker, astutely observes that the region’s numerous “10,000-foot peaks, [which] form a Sierra-quality skyline, [and] an eastern escarpment that vaults thousands of feet above the Sawtooth Valley, [beg] comparison to the Tetons.” The Sawtooths, however, receive approximately one-third of the annual visitation reported for their more renowned Wyoming counterparts.

The Sawtooths’ footprint measures approximately 35 miles from north to south, and 20 miles across at its widest point. The range’s core was federally protected in 1972 by the establishment of the Sawtooth Wilderness, which contains at least 40 peaks that exceed 10,000 feet in elevation, the highest of which is Thompson Peak at 10,751 feet. Some 350 miles of trails provide access to the Sawtooth backcountry. 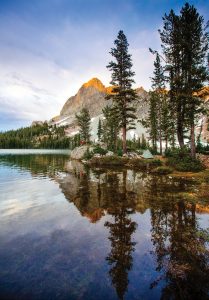 Alice Lake is one of the most popular backcountry destinations on the east side of the Sawtooth Mountains.

The Sawtooth National Recreation Area (SNRA), which is virtually identical in size to the state of Rhode Island, was also established in 1972 and encompasses the Sawtooth Wilderness in its entirety, as well as the Cecil D. Andrus-White Clouds and Hemingway-Boulders wilderness areas. Both of the latter preserves are east of the Sawtooths and Idaho Highway 75. Additionally, portions of the Smoky Mountains lie within the SNRA, as do the headwaters of the Big Wood, Boise, Salmon, and South Fork of the Payette rivers.

The Sawtooth Scenic Byway, also known as Highway 75, is the primary arterial highway in the SNRA; it links Stanley and Sun Valley/Ketchum, which are, respectively, the northern and southern gateways to the Sawtooth Mountains. Located at the only place in Idaho where three designated scenic byways come together, Stanley is also a base of operations for whitewater rafting excursions on the legendary 100-mile-long segment of the Middle Fork of the Salmon River, which traverses the Frank Church-River of No Return Wilderness.

Recreational opportunities in the Sawtooths and SNRA are virtually unlimited. Outdoor enthusiasts can choose from a year-round cornucopia of options that includes skiing at Sun Valley, fly fishing and whitewater rafting on the Salmon River, and hiking and backpacking in the high country, as well as lengthy bike trails and leaf peeping in the Big Wood River Valley, stunning scenic drives, nature photography, and star gazing beneath perhaps the most pristine night sky in America.

This reﬂection image on Little Redﬁsh Lake is enhanced by the lingering touch of alpenglow on the peaks.

Trail Recommendations in the Sawtooth Wilderness

The Sawtooth Mountains are a backpacker’s paradise. However, visitors who can devote only one day of their itinerary to hiking should seriously consider Sawtooth Lake Trail. Solitude is not a common commodity on this trail, but its popularity is well-deserved. The trailhead is conveniently located near Stanley, via Iron Creek Road, which exits Highway 21 at mile marker 128.4. This route’s length (9.8 miles round trip) and elevation gain (1,720 feet) ensure a good, but not grueling, workout. The ultimate reward is the most photographed vista in this wilderness area. The breathtaking beauty of Sawtooth Lake’s deep blue waters, nestled against the snow-banked granite pyramid of Mount Regan, will be encoded in your memory for years to come. 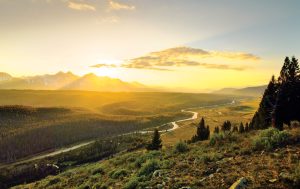 The expanse of the Sawtooth Valley and Salmon River becomes even more mesmerizingly beautiful during the golden hour.

More adventurous souls may regard the Alice-Toxaway loop as the perfect backcountry prescription. This three-day, 20-mile circuit starts from the Tin Cup trailhead at Pettit Lake and exposes hikers to some of the most spectacular scenery on the east side of the Sawtooths, including the Twin Lakes basin and Snowyside Peak. A high-altitude traverse of Snowyside Pass (9,390 feet) limits seasonal access, so backpackers often wait until August to fully explore this region.

The Salmon River Scenic Byway is the most direct route from Montana to the Sawtooth Mountains. It follows U.S. Highway 93 south from Lost Trail Pass (7,014 feet) to Challis, Idaho, and then Highway 75, which transits the deep, forested Salmon River canyon. Motorists may experience a profound “wow” moment when the latter road finally turns due south near Lower Stanley. At that juncture, the valley opens up, and the Stanley Basin and Sawtooth Mountains come into view for the first time. 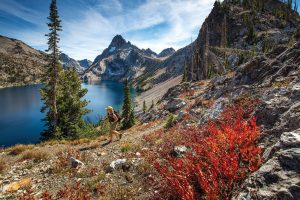 Despite its popularity, the Sawtooth Lake Trail and its signature vista should be a priority on the itinerary of any hiker or backpacker visiting the Sawtooth Wilderness.

On the Ponderosa Pine Scenic Byway (Idaho Highway 21), which approaches the Sawtooths from Boise, these mountains do not become visible to eastbound travelers until mile marker 117. From there, must-stop destinations include Stanley Lake and, for hikers, the Iron Creek Trailhead, which is the starting point for the trail to Sawtooth Lake, the largest in the Sawtooth Wilderness. Stanley Lake, with majestic McGown Peak (9,860 feet) towering beyond its southern shore, is the most picturesque of five glacially carved gems that adorn the eastern base of the Sawtooths.

The Sawtooth Scenic Byway provides, quite simply, one of the premier driving experiences in America. Spur roads from this highway lead to a host of other attractions, including Redfish Lake, which is the largest lake in the Sawtooth Valley, and by far the one with the most visitor services. This scenic byway progressively gains altitude before reaching Galena Summit (8,701 feet), from which it descends to the resort communities of Sun Valley/Ketchum and its southern terminus at Shoshone, Idaho.

Destinations and Activities in the Big Wood River Valley

The Harriman Trail follows the Big Wood River for 18 miles, from SNRA headquarters north of Ketchum to Galena Lodge, but gains only 1,200 feet in elevation over its entire course. Consequently, this gentle pathway is ideal for hiking, mountain biking, and, from Murphy Bridge north, horseback riding. In winter, it is prepared for Nordic skiing and serves as the venue for the Boulder Mountain Tour, an annual ski race. Several spur trails branch off the Harriman, most of which head west into the Smoky Mountains. Well-conditioned hikers may want to tackle the Gladiator Creek Trail, which begins near Galena Lodge. Climbing to an altitude of nearly 9,800 feet, it affords exceptional views of the Boulder Mountains to the east.

On the ﬁnal approach to Stanley via Highway 75, the Salmon River Valley and Stanley Basin open visually with breathtaking suddenness.

Fall color first appears in the Big Wood River Valley near Galena Summit, occasionally as early as Labor Day weekend. By the end of September, riparian stands of cottonwoods and aspens will grasp the attention of leaf-peeping hikers on the easternmost segment of the Harriman Trail. Other concentrations of fall foliage include the Adams Gulch and Pioneer Cabin areas. The Adams Gulch trailhead, located just north of downtown Ketchum, provides access to several aspen-lined trails up to 14 miles in length. The 4-mile, 2,500-foot ascent to Pioneer Cabin, the most popular hiking destination in Sun Valley, offers commanding views of fall color and the highest peaks in the Pioneer Mountains, which can exceed 12,000 feet in elevation. 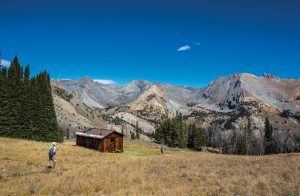 Modeled after alpine huts in Europe, Pioneer Cabin was built in 1938 to make skiing in the Pioneer Mountains more accessible. For the curious reader, the message on its roof states, “The higher you get, the higher you get.”

Skiers will find the slopes of Sun Valley to be as inviting as their predecessors did when Sun Valley Resort initially opened in 1936. This world-class destination, the first of its kind in America, resulted from collaboration between W. Averell Harriman, then the Union Pacific chairman, and Count Felix Schaffgotsch of Austria, whom Harriman hired to identify the perfect site for his envisioned resort. Aspen, Colorado and Jackson, Wyoming failed to meet the Count’s exacting standards. After spending three days in Ketchum, however, Count Schaffgotsch informed Harriman that “this [area] combines more delightful features [than] any place I have seen in the United States, Switzerland, or Austria for a winter sports resort.”

Most of the ski runs are located on Bald Mountain, which overlooks Ketchum. Beginners, on the other hand, may consider Dollar Mountain, near Sun Valley Lodge, to be more appropriate for their experience levels. Air service is available to visitors at Hailey, Idaho, which is only 12 miles from Ketchum and Sun Valley.

Recreational opportunities in the Sawtooth Mountains extend beyond this world. In December 2017, the International Dark Sky Association formally recognized the first dark sky reserve in the United States. Then one of only 12 areas so designated in the world, the Central Idaho Dark Sky Reserve (CIDSR) encompasses 1,416 square miles, extends from Ketchum to an area just northwest of Stanley, and includes the entire SNRA. 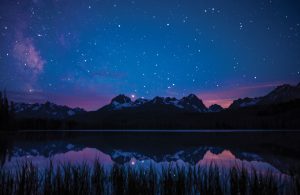 The tranquil waters of Little Redﬁsh Lake perfectly reﬂect the night sky. Ofﬁcially designated as one of the few dark sky reserves in the world, central Idaho provides stargazing opportunities that are unsurpassed.

Ketchum and Sun Valley occupy peripheral positions in the CIDSR, whereas Stanley is close to its core. On clear, moonless nights, the sky over Stanley Basin is so pristine that dark bands of intergalactic dust are visible against the celestial backdrop of the Milky Way. According to John Barentine, program manager of the International Dark Sky Association, residents of Stanley regard “the nighttime darkness [and] the ability to see the Milky Way as something that is definitive of their part of the state and their part of the country.” Nearby Stanley Lake is spectacular at any time, but the Milky Way, viewed from there as it rises above the craggy summit of McGown Peak, is an irresistible target for astrophotographers, one that will inspire awe just as it did for generations of our ancestors. 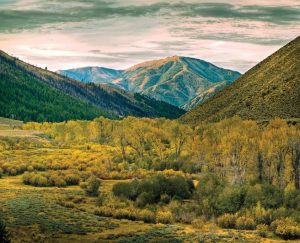 Stanley provides a superb base of operations for exploring the Sawtooth Mountains, but it is located in a compact, bowl-shaped basin at 6,260 feet in elevation. Consequently, Stanley consistently reports some of the coldest temperatures in the contiguous United States. Indeed, its overnight low dips to freezing or below, on average, 294 days per year.

Two separate studies revealed that Stanley recorded the nation’s coldest temperature more frequently than any other meteorological station in the country. This tiny community held that distinction on 398 days from 1995 to 2005 and 522 days between 1996 and 2015. Interestingly, the majority of those occasions occurred during summer. Winters, predictably, are often brutally cold in Stanley. During this time of year, temperatures frequently plummet to 30 degrees below zero, and Stanley’s all-time record is a bone-chilling -54 degrees Fahrenheit. Visitors to Stanley are rewarded by the extraordinary beauty of the surrounding area, but obviously need to come prepared for local weather conditions.

Optimal Viewing conditions in the CIDSR

Scientific measurements of the night sky’s darkness are typically performed with a device called the Unihedron Sky Quality Meter. A measurement of 22 magnitudes per square arcsecond is indicative of absolute darkness, where there is no light pollution or sky glow whatsoever. Steve Botti, one of the driving forces behind the establishment of the CIDSR, has recorded readings of 22 near Stanley.

Without empirical data, timing and location are the most important criteria to consider in scheduling your visit to CIDSR. Check the lunar calendar for new moon phases, since stars are most visible during those periods. Should a major meteor shower — most notably the Quadrantids (January), Perseids (August), or Geminids (December) — coincide with a new moon, that alignment certainly could enhance the quality of your star-gazing experience.

For an online map of the CIDSR that identifies recommended viewing sites, see visitsunvalley.com/winter/the-dark-skies-of-sun-valley-id.