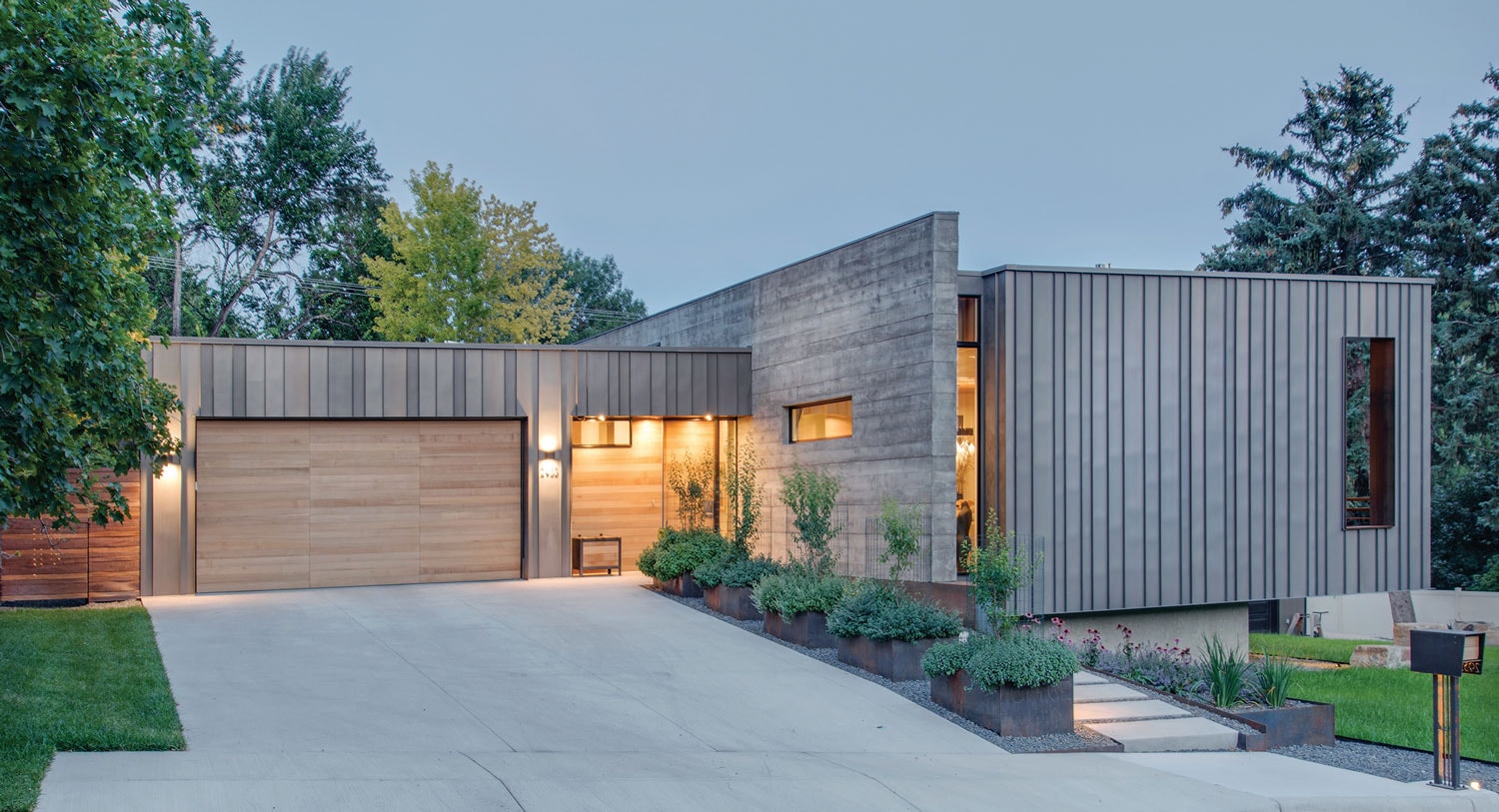 The 18-inch-thick concrete wall that runs from the front to the back of this Billings, Montana, home serves as its anchoring feature.

A Billings, Montana, home and creative haven floats on the horizon 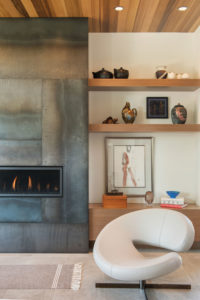 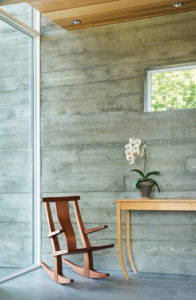 In the shadow of the Rimrocks, the sandstone formations that hover over Billings, Montana, a house composed of two rectangular boxes appears to be floating above the ground. An 18-inch-thick concrete wall separates the boxes and serves as an anchoring mass, counterbalancing the home’s cantilevered spaces and acting as “the organizing element for the entire design,” says architect Dusty Eaton of A&E.

It was a mammoth undertaking for builder Blake Laughlin, owner of Laughlin Construction, who built wooden forms, poured the concrete, and sanded each board by hand, creating the 75-foot-long, 15-foot-tall divider. The process resulted in a wall that almost mimics the look of aged barnwood. It is the basis for the home’s hallway, running from front to back, and it divides the main living space from the garage and utility rooms. It also creates a straight-line symmetry that the homeowners favored, and its texture prompts visitors to run their hands along it — a kinesthetic encounter not typically experienced in most homes. 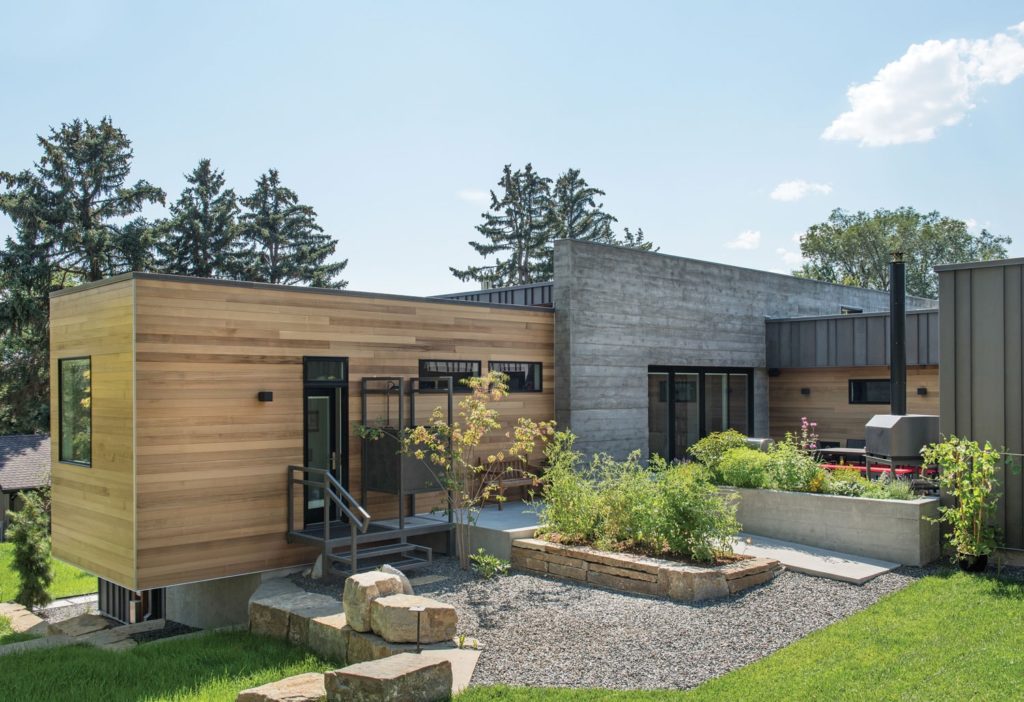 Outside space was important to the homeowners. The patio includes an outdoor oven and a shower accessed by the master bath. 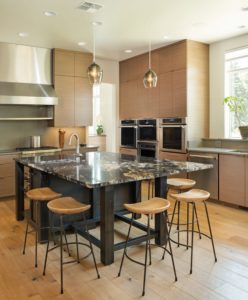 A well-appointed kitchen provides for the couple’s love of cooking and entertaining. Metalsmith Craig Whitely created the custom storage units under the large kitchen island.

Working with Eaton and designer James Kordonowy, both partners with A&E in Billings, the team incorporated the crispness of glass, metal, and concrete but tempered those materials with wood, so the home feels warm. Flat white walls unadorned with trim create a clean palette, resulting in a museum-like quality so as not to compete with the art, furniture, and artifacts the homeowners have collected during their more than 30 years together.

The homeowners — an active married couple in their 60s — had several things in mind when they began designing the 3,800-square-foot abode. They wanted a space where they could live simply, and one which required little maintenance. They also wanted a home design that would bring the outside in, be a haven for their creative endeavors, and offer no distractions.

Inspired by treehouses and the feeling of being up in the air, the cantilevered sections of the home make certain rooms seem to float above the ground. Slot windows frame views of the Rimrocks — there’s even one in the master bedroom’s walk-in closet. And the south-facing wall is composed nearly entirely of glass. All of this, along with 10-foot ceilings, produces an airiness that gives the homeowners space to think, create, and breathe. Glass doors open onto a patio outfitted with a grill, oven, and an outdoor shower on the east side of the home, while more glass doors on the south lead out to a porch. A glass garage door on the patio also gives indoor/outdoor access to the husband’s shop. 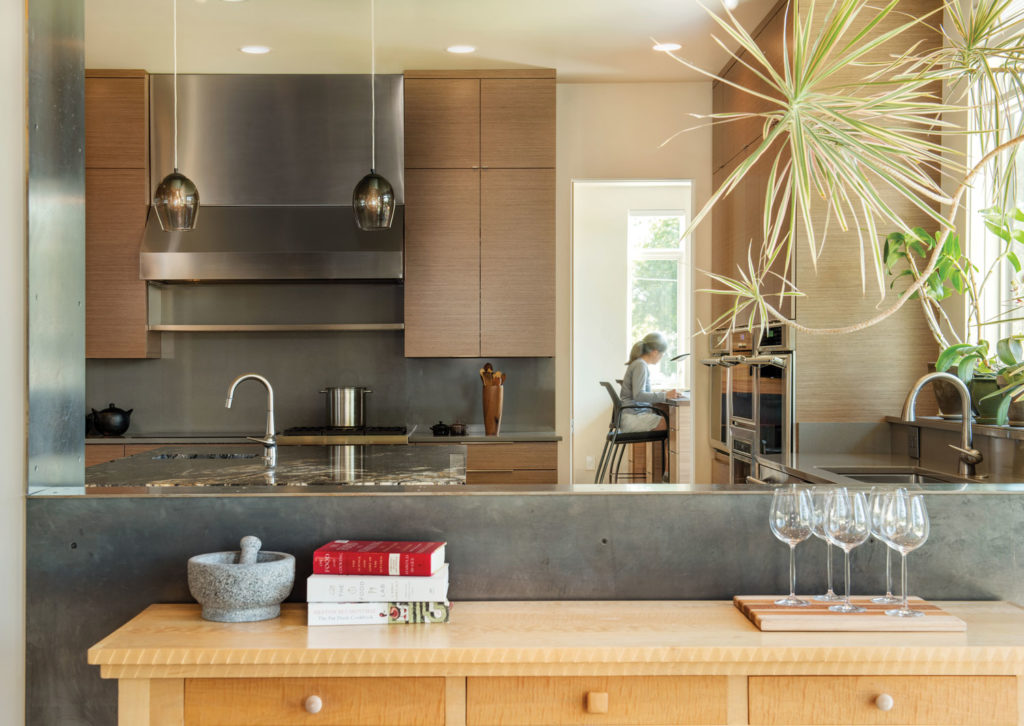 High ceilings and the use of simple materials, such as metal, glass, and wood, give the house an airy feel with clean, unobtrusive lines.

Because both husband, a physician, and wife, a food writer and educator, love to cook, the kitchen became the core of the design, with the adjacent study being an important component as well. “The kitchen was really the heart, with the aorta being the study,” the wife says, speaking in her husband’s vernacular. “We spend a majority of our time in the kitchen. We cook there, friends gather there, it’s where everybody is.” 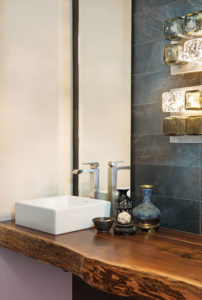 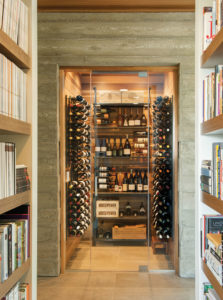 Space for cookbooks, a pantry, and a wine cellar were also important features to the homeowners.

Aptly placed in the center of the floor plan, the kitchen is equipped with side-by-side gas and induction stoves, two regular ovens plus a steam convection oven, two dishwashers, and a large, deep sink. There’s a wine cellar and pantry across the hall, and outside, within steps of the kitchen, are produce and herb planters where they can access freshly grown food.

And although the homeowners are still quite active, they planned for the future. “We wanted to build a house that would be our last house,” the wife says. Although there is a basement with a workout room, guest room, and full bathroom, it’s a space that’s not needed for daily living. The main floor meets the couple’s needs. 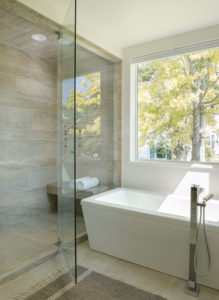 The elegant master bath includes a separate tub and a large glassed-fronted shower.

The project went through at least a dozen iterations and took nearly three years from conceptualization to completion, but the homeowners feel it was well worth the wait. “We believe we hired the Rolling Stones of contractors and craftsmen,” the wife says. Of the five firms, including metalworker Craig Whitely, of Arm and Anvil (who fabricated the kitchen shelving, two fireplace facades, and the outdoor shower), to Steve Hergett of Wilson Cabinetry, Charlie Sinclair of Wavecrest Home Theater, and Laughlin, many get their business through word-of-mouth, and many have retired or are preparing to do so.

As for the designers, she says, Kordonowy is a visionary. “One of the things James did that always impressed me was he would close his eyes when we had an idea, and I always believed he could see the image of what we had just talked about in his head.” 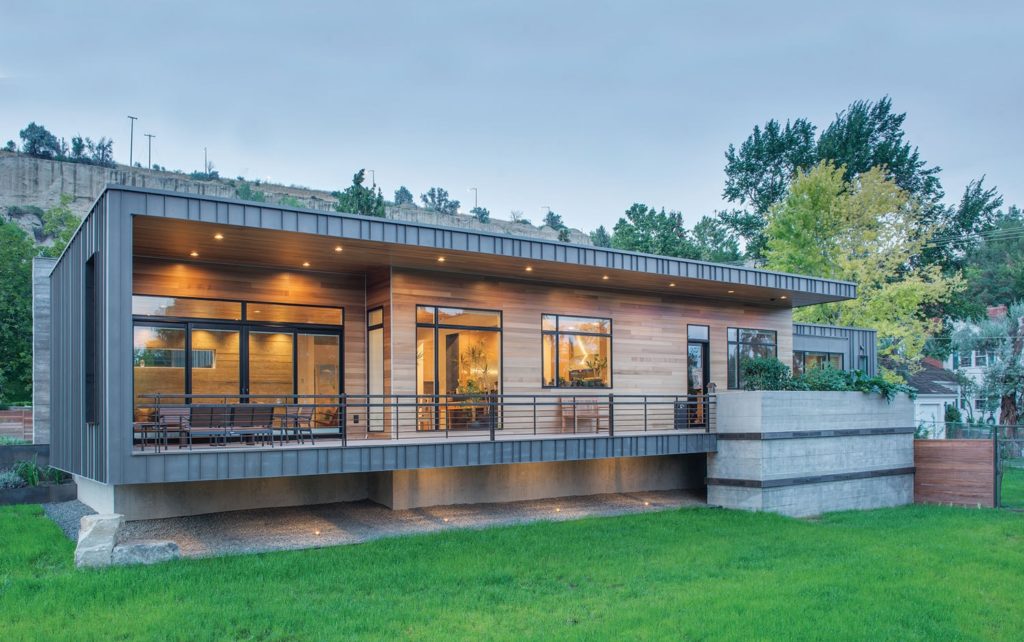 Glass windows and doors along the south side
of the home provide natural light and passive solar heat in the winter, while the extended roof over the porch shields the inside from the summer sun’s heat.

Eaton agrees, explaining that his partner has an incredible ability to think seamlessly about scale, proportion, and texture. “When you walk down that corridor, James considered how light washes across the texture of the wall that you can touch, what it feels like under your feet, what the proportion of that space is … those elements are what impacts your emotional experience of the space.”