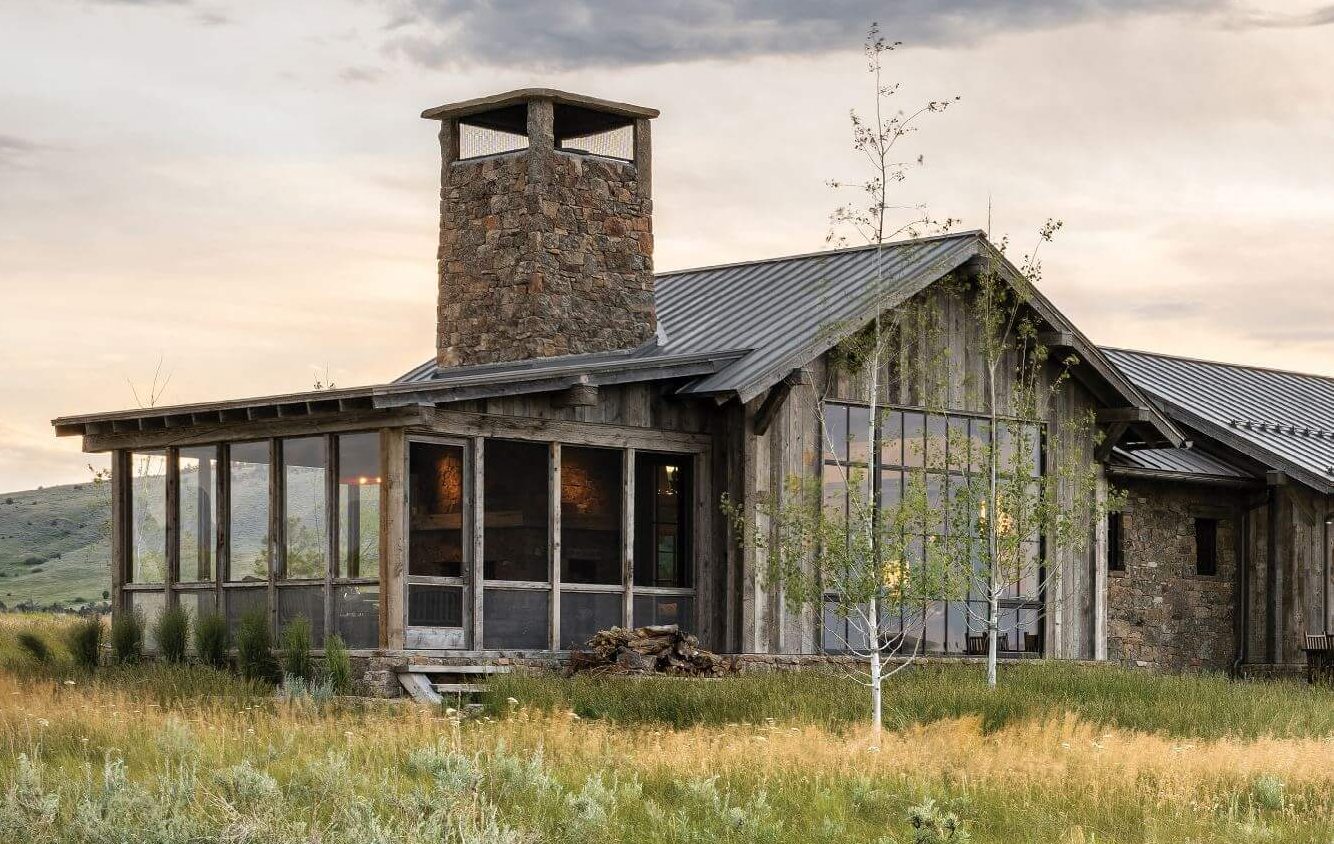 Standing on a property surrounded by a number of mountain ranges, one might think the impetus for building there would be what’s found outside the windows. But for this home in Gallatin Gateway, Montana — located between Big Sky and Bozeman — it was more about embracing a family’s history and heirlooms by physically integrating those stories into the process. 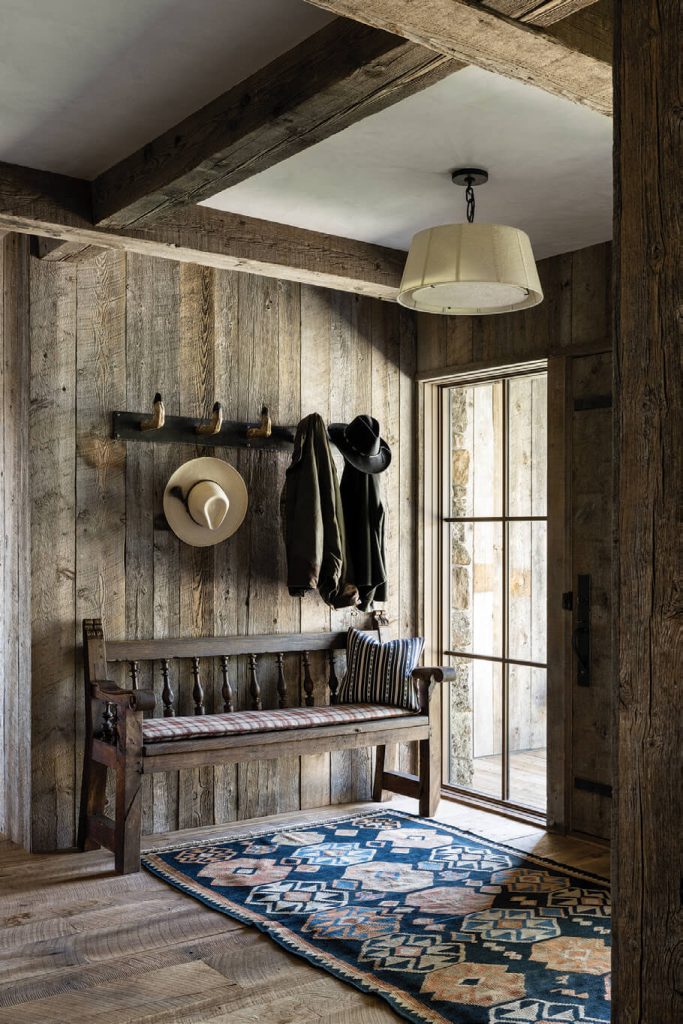 The entry features a vintage bench supplied by the homeowner and a Paul Ferrante lighting fixture, which complements the reclaimed vertical wall planking and European deer hoof coat rack.

“The location of the property within the foothills of the Spanish Peaks Range influences the subtle mountain feel,” says Matt Miller, principal of the Bozeman-based Miller Roodell Architects. “The home actually draws from the valley’s agricultural past. There was an emphasis on being authentic and timeless, and to design with simple forms and reverent materials that would not detract from the native landscape and surrounding ranch vernacular.” 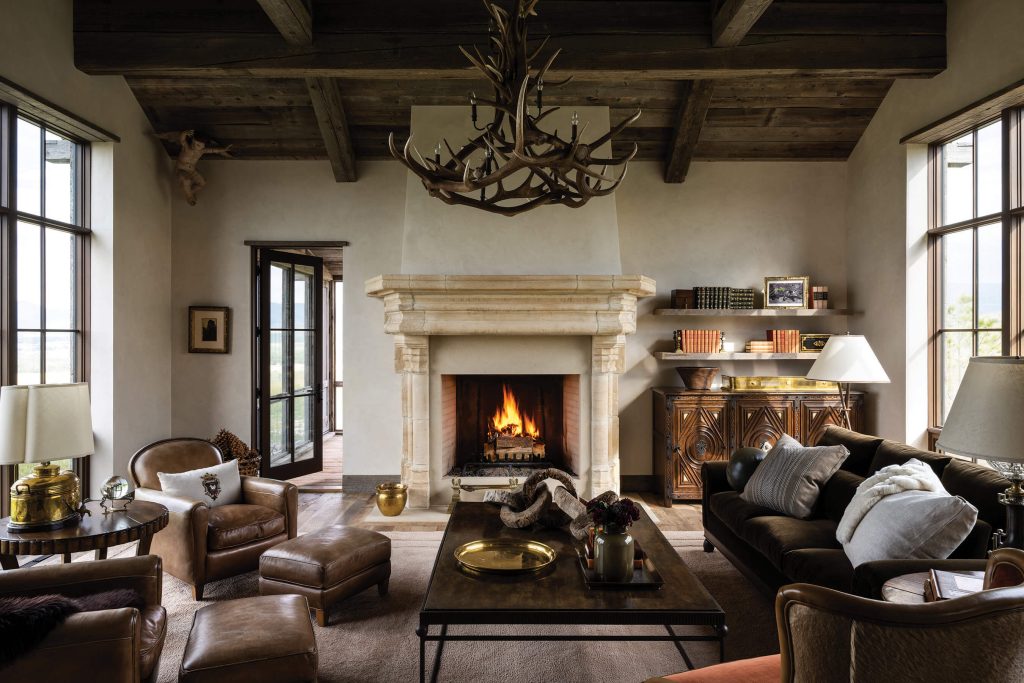 An Ebanista mohair sofa and a coffee table from Formations are combined with vintage cigar club chairs, juxtaposing the new with the old, while the European stone fireplace with matching wall plaster maintains continuity. The chandelier is from Fish’s Antler Art, based in Bozeman.

The 70-acre parcel with a modest ranch house was the first property the Setzer family looked at on their search, but they weren’t ready to pounce. “Two years later, when we changed tracks from buying an already-built house to just property, we came back to this lot,” says Jeff Setzer. And the couple was able to stay in the existing ranch house to work with the team on site. 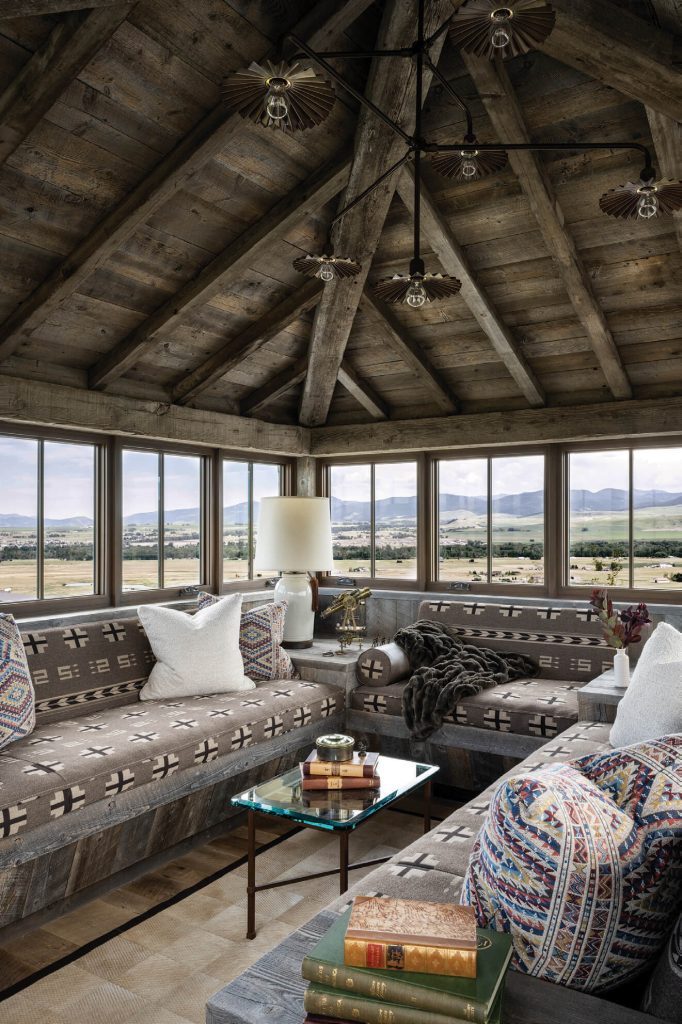 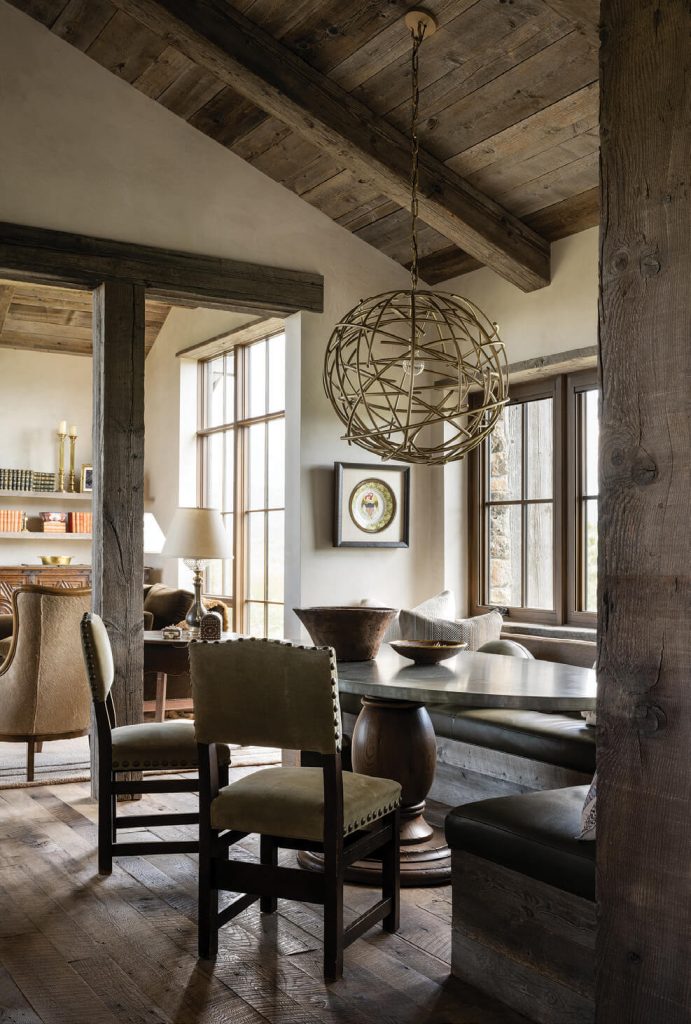 In the dining area, the client’s suede chairs pair nicely with a green leather banquette from GH Leather and a chandelier from Unique Lighting.

Miller explains that the couple had a vision for the project from the beginning, wanting to create a home that embodied the rural qualities of the Montana lifestyle while still being proximate to Bozeman’s amenities. And while the stunning views are framed by large, strategically placed windows throughout the main living areas, the Setzers’ main goal was to incorporate relics, antiques, and raw materials that were a part of their family history or acquired through their love of antiquing. “My grandfather had a Hereford Ranch and a crate-packing company that hauled everything from cheese to dynamite. Each wooden box had a steel brand plate, and that’s where all the brands on the ceiling came from — that was Abby’s idea,” says Setzer, referring to Abby Hetherington, principal of Abby Hetherington Interiors, who was involved in the project from day one. 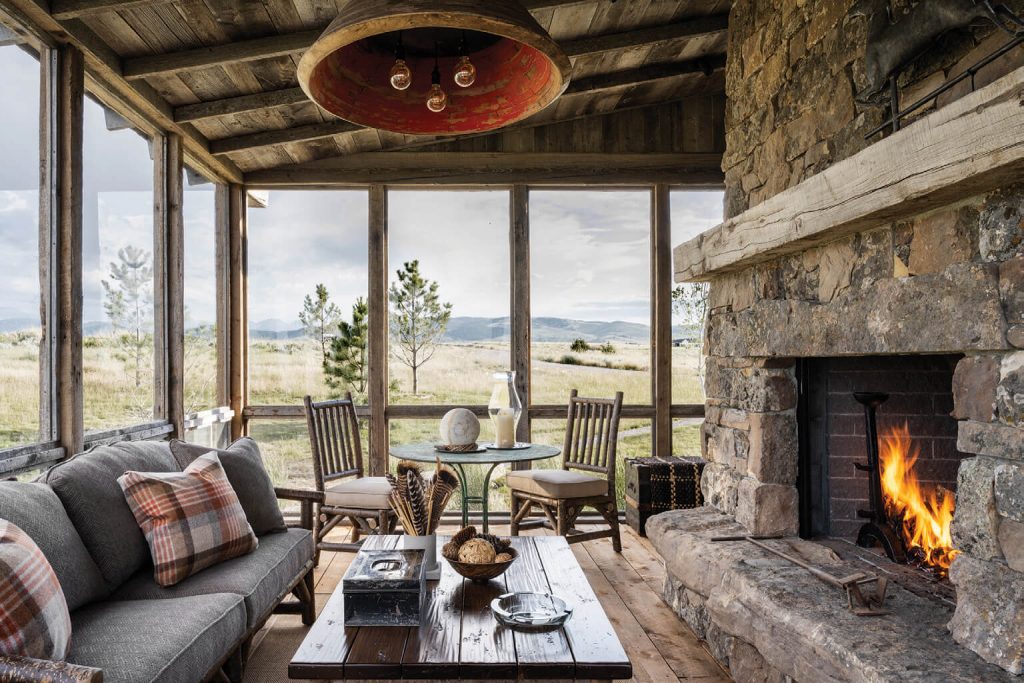 From the west-facing breakfast nook to the screened-in porch and the bar, the materials used lend the home an air of authenticity. In fact, the majority of the reclaimed wood used throughout was sourced from a working cattle ranch in Red Lodge, Montana. “The timbers and corral boards were disassembled at the ranch and shipped in raw format. The general contractor then milled the material to final specification and installed it,” says Miller. 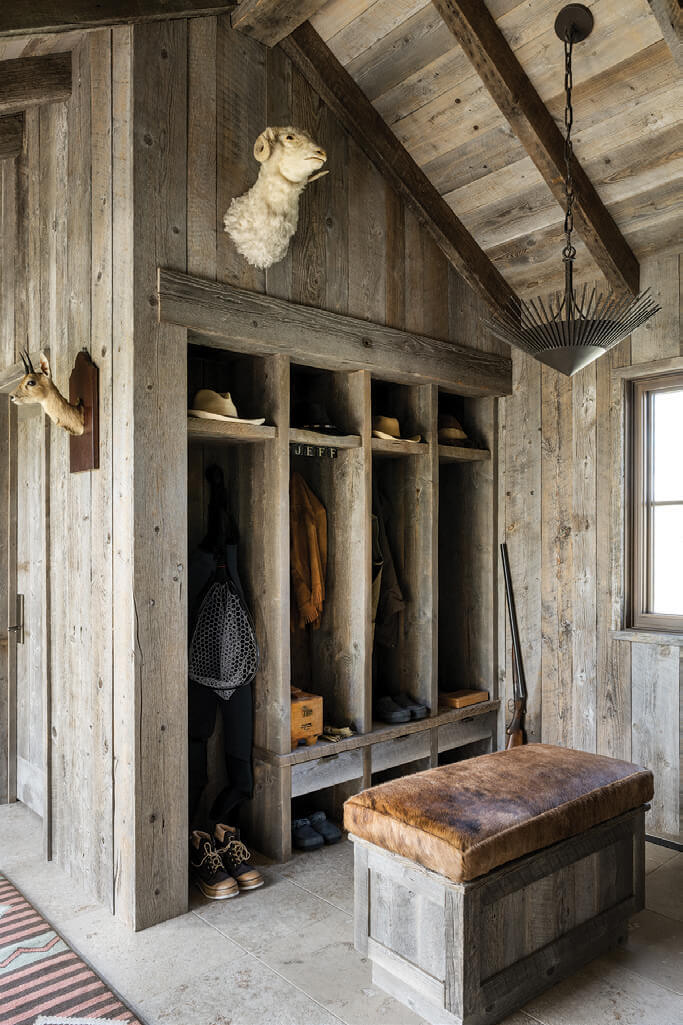 Custom cubbies made of reclaimed wood were built by Bolton Custom Homes.

Though nooks and crannies are thematic of the home’s overall design, the structure remains light and bright, illuminating the soft finishes chosen by Hetherington. “Matt did a great job on the modern application of the windows; the house is warm and quite cozy,” she says. “The homeowners have such a keen eye for design, especially iconic styles that filter through their fabric choices, trims, welts, and custom tablecloths. Everything in the house is about quality, and every custom piece we did — because of how it was constructed — will become an heirloom to be handed down.” 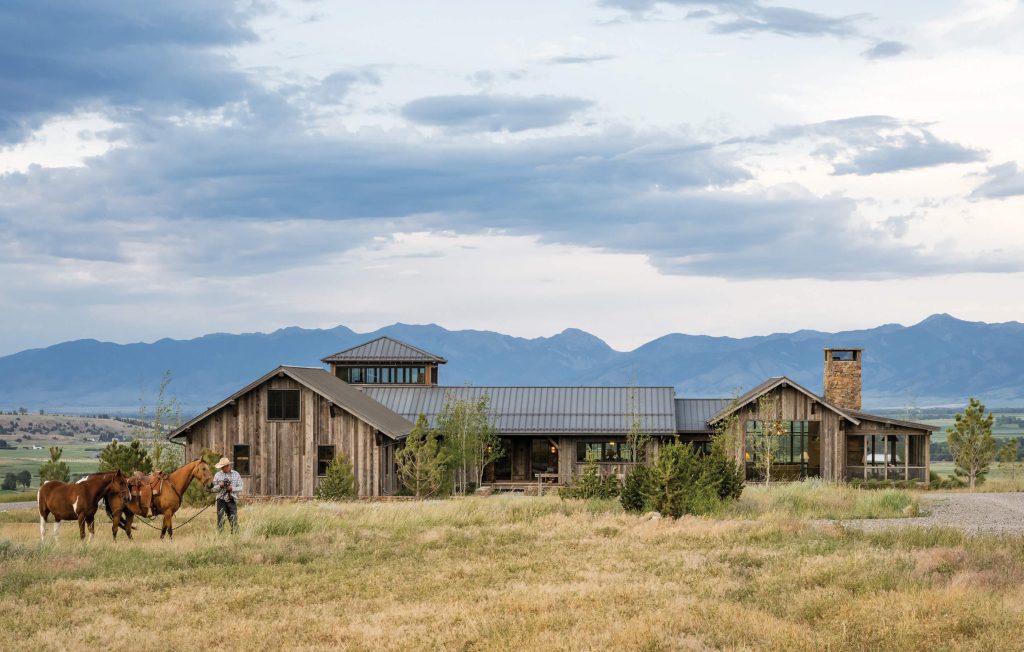 The majority of the reclaimed wood used throughout was sourced from a working cattle ranch in Red Lodge, Montana.

Incorporating the couple’s existing pieces into the interior design was a big part of Hetherington’s role. “They enjoy antiquing and had heirloom pieces that they wanted to include,” she says. “They came to the project with 50 percent of the lighting ready to go.” But first, each lamp needed to be reviewed, wired, and cleared for a 21st-century home. Another element that needed updating was the antique fireplace, which is surrounded by hand-carved limestone originally from France. “The fireplace has a backplate from 1692,” says project contractor Cass Bolton of Bolton Custom Homes. “To make sure it would work, we needed to assemble the entire piece to ensure we had the bearing for the weight, and that all the inner components — the chimney, the firebox, and the smoke shelf — worked.” In doing so, Bolton explains that his team decided to pour a concrete slab to assemble the fireplace on, in order to determine how to fit it into the house. 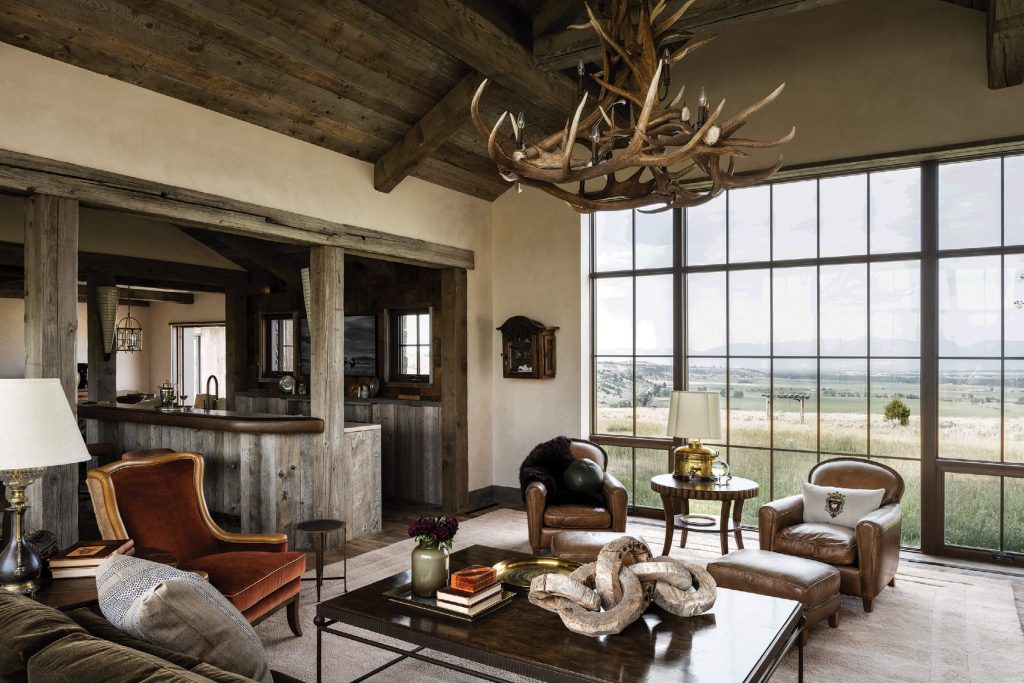 The floor-to-ceiling windows create a focal point in the great room, contrasting with the plaster walls. The custom bar is the central meeting area for the home.

Setzer enjoys telling the stories behind the antiques and heirlooms that adorn the home, often explaining how some objects inspired a rustic elegance that is both sophisticated and fun. “Jeff brought up this big chain that was used in a sawmill around the early 1900s, and we ended up creating a bar foot-rail from it,” Bolton says. “It was so much fun to have these family heirlooms to build around — the plow disks were another surprise, and they became the handrails.” 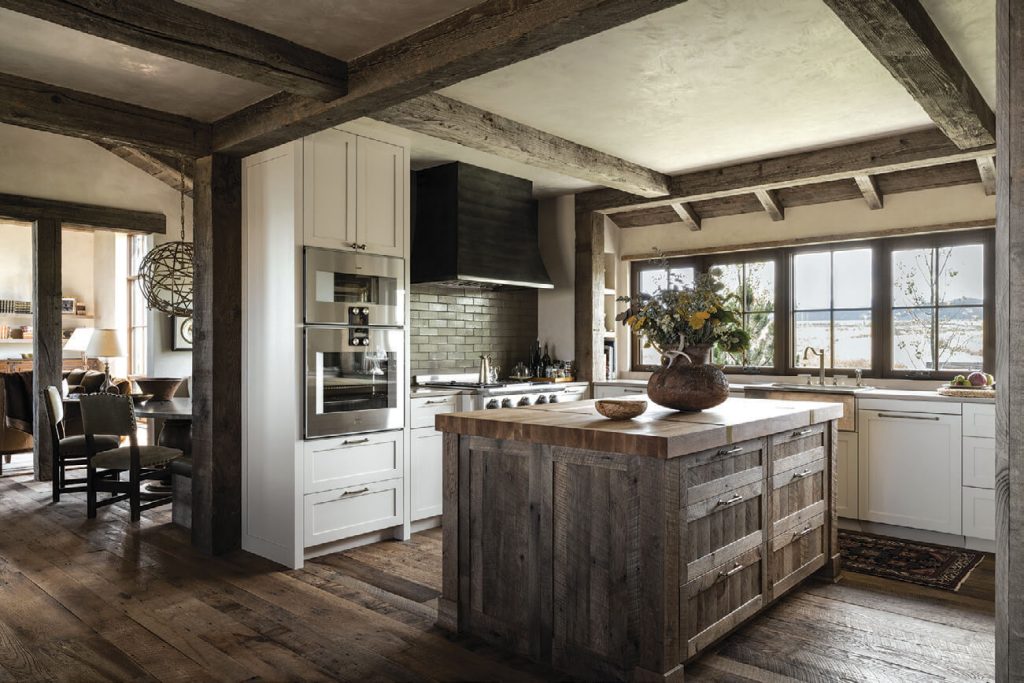 The kitchen features Caesarstone countertops, a butcher block island with brass strapping, and a brass sink from Rocky Mountain Hardware.

Other highlights include the bedroom doors — determined to be from the 1600s, as their bases are made of hickory, a material that became obsolete after the blight in Europe — and the door to the gun safe, which Setzer saved from demolition. “The door was put in by my grandfather at the factory, and when the operation moved across town and they were tearing down the building, I hauled it up here,” he says. 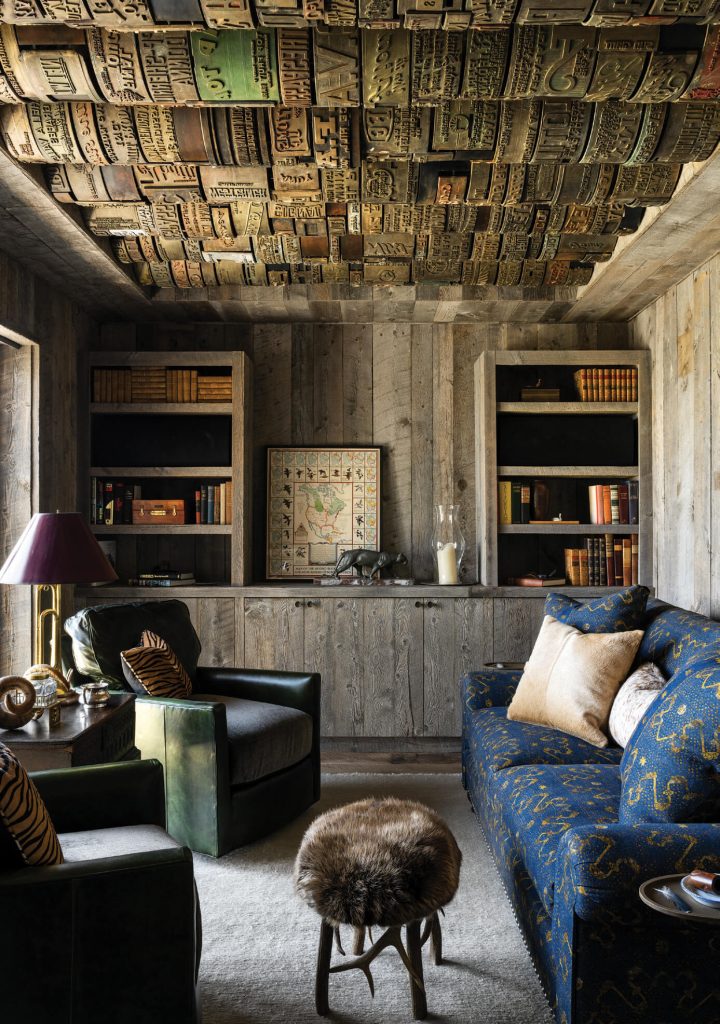 Designed as an intimate space to enjoy a book, the library includes reclaimed wood walls and a ceiling that’s covered with steel brand plates from a crate-packing company run by the owner’s grandfather. 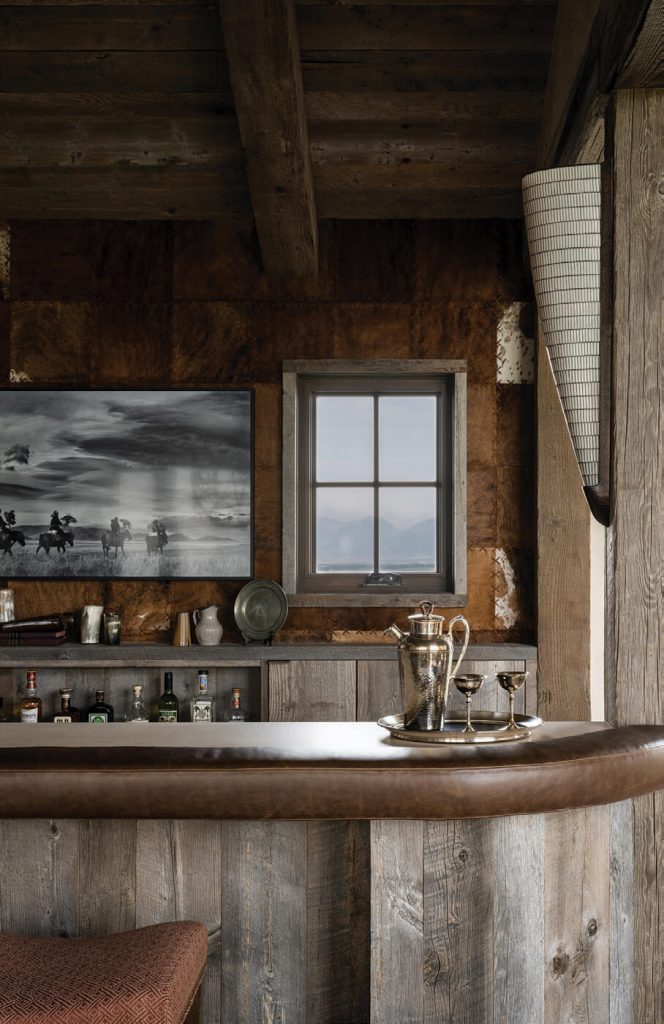 A custom leather armrest on the bar makes it easy for guests to belly up, and the wall sconces are from Trammell-Gagné.

Setzer enjoys working from his office in the tower of the home, which boasts 360-degree views of the Gallatin Valley and surrounding mountain ranges. But, he says, the beauty of Miller’s design lies in the many intimate seating areas, which are perfect places to connect with friends and family. “The house is incredibly comfortable, and everyone worked so well together to make that happen. It says something when you’re still good friends with your contractor.”