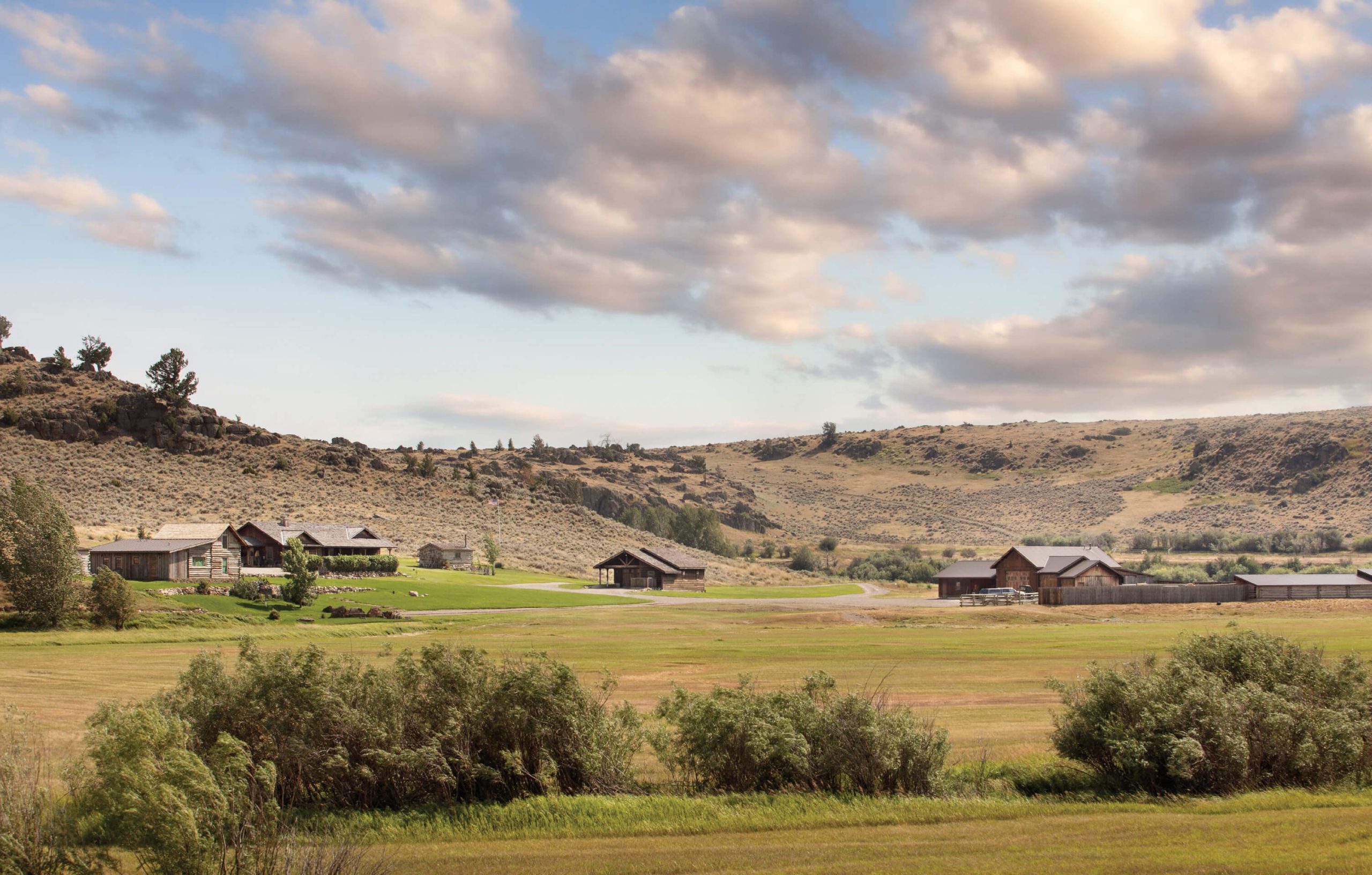 The ranch buildings, including the historic cabin (far left), fit into the rural setting near White Sulphur Springs, Montana.

08 Apr The Past Reimagined

Anyone glimpsing the tidy log cabin sitting on a ranch near White Sulphur Springs, Montana would likely assume it was a historical relic from the 1880s, when it provided shelter for the cowhands. Out near the barns and workshops on a property that’s nestled in a tranquil canyon, the structure is surrounded by a well-manicured, terraced lawn, and a stone path curves invitingly toward the front door. Although the cabin’s appearance and footprint do remarkably resemble gelatin silver print images found in local photo archives, one step beyond the threshold reveals a contemporary Western dwelling that respects the past, while providing exceptional modern comfort. And that’s the moment that the miraculous transformation that took place becomes clear. 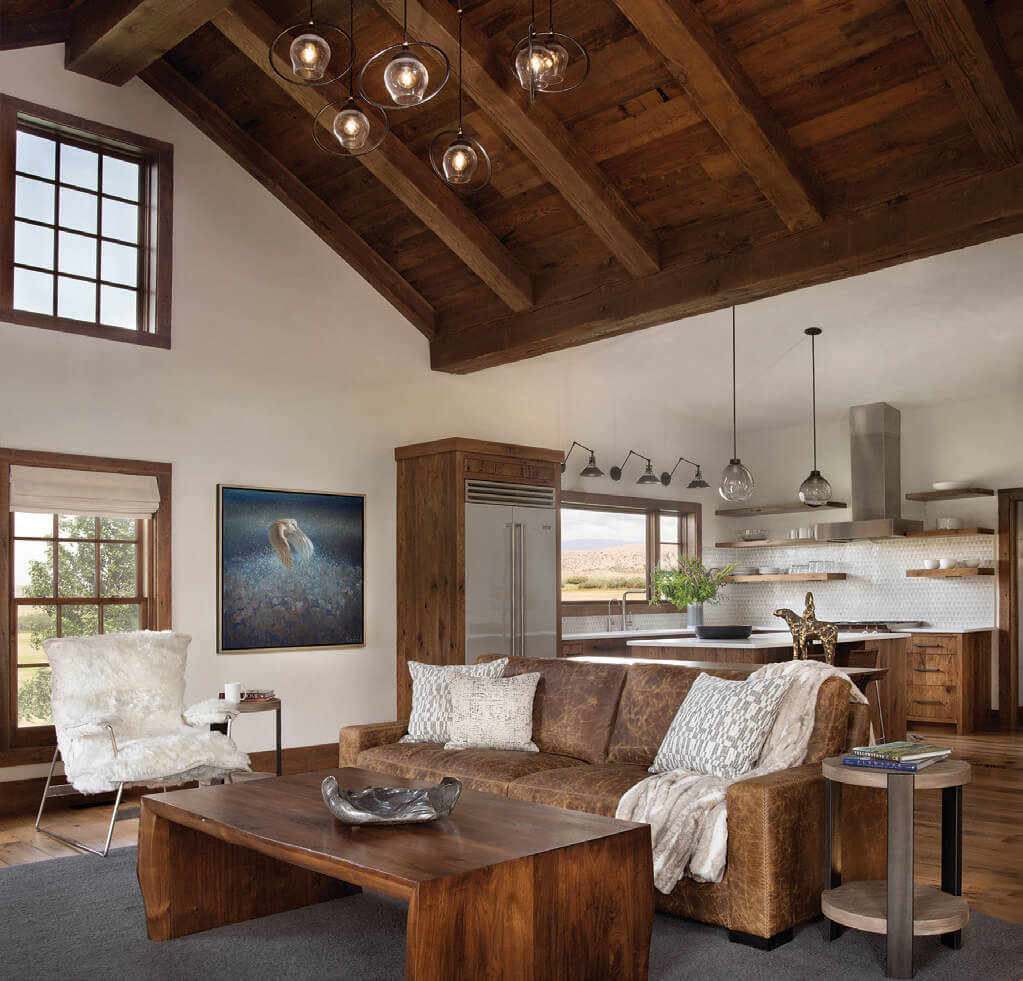 A custom chandelier — made from hand-forged iron and hand-blown glass by Iron Glass Lighting in Bozeman — hangs from the living room’s 20-foot-high central beam.

The reimagining began when the owners of the property asked Liz Robb — of Elizabeth Robb Interiors in Bozeman and Big Sky — to tackle the historic structure after she had realized their vision for the main residence. “They wanted it to look, on the outside, exactly like it had when it was originally built,” Robb says, “and to have a fresh, clean, no-nonsense, high-end feeling on the inside.” 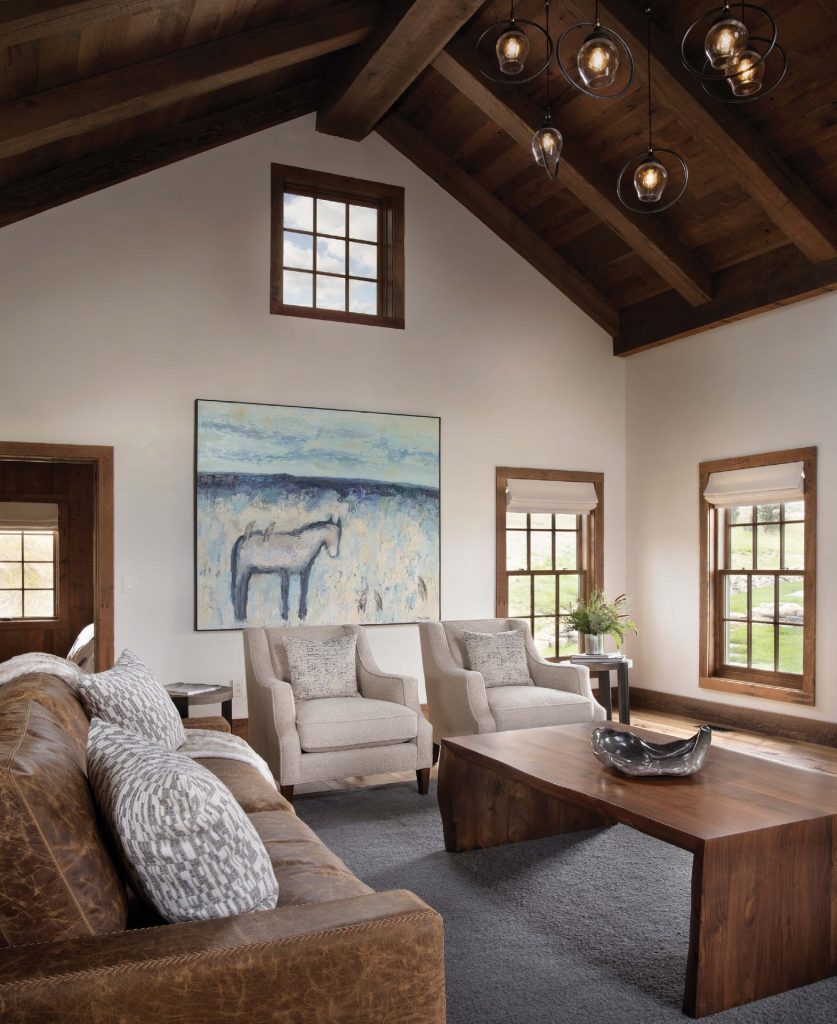 The living room features an Urban Cowboy sofa in vintage leather and a Snoopy Chair, both from Eleanor Rigby Home, along with a custom aged-walnut coffee table by Epoch West Furniture in Bozeman. The painting, “Sunshine and the Cowbirds,” by Montana artist Theodore Waddell, was purchased from Visions West Gallery in Bozeman.

This was easier said than done. On closer inspection, it became clear that many of the original materials were showing their age. Gaps between the logs were not only letting the elements in, but also the local critters. “You couldn’t even walk inside without a mask,” Robb recalls with a shudder. 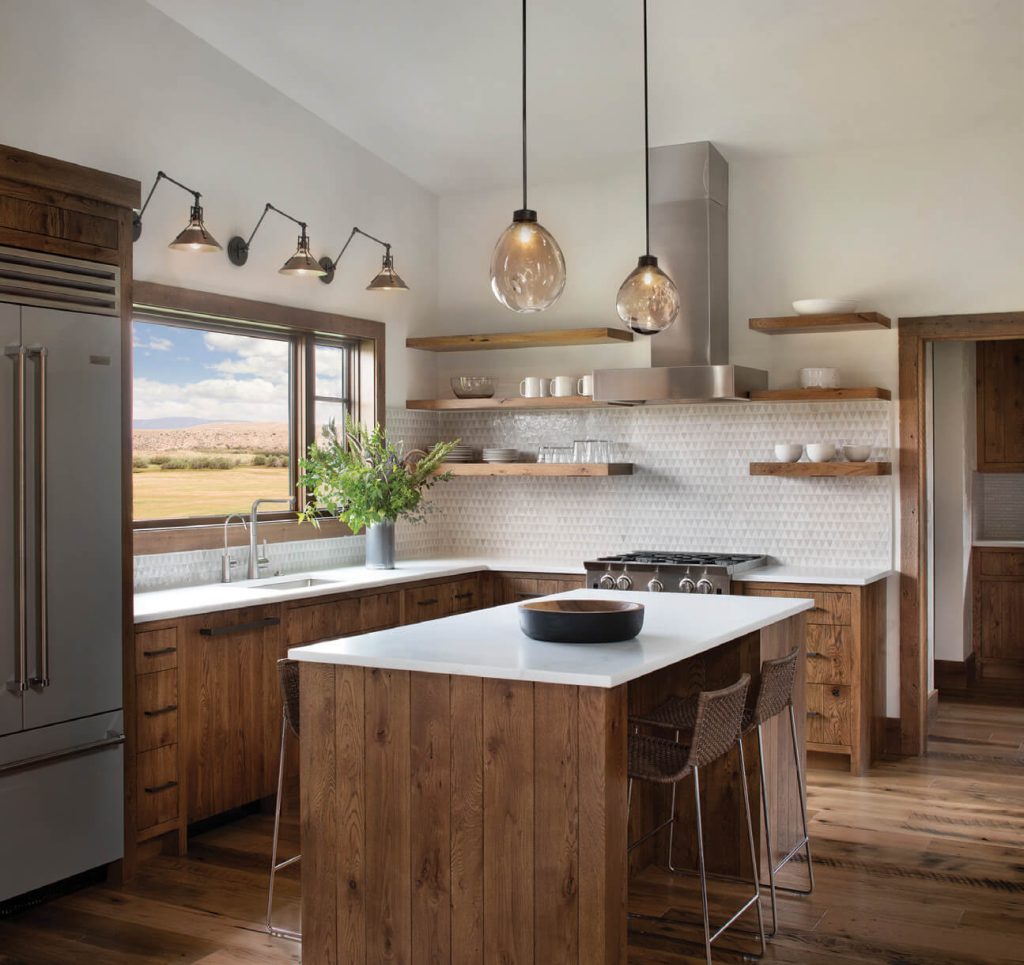 Two more major participants were brought on board to expertly address these matters: architect Thor Arnold, owner of Zimtor Architecture in Bozeman, and contractor Dan Rooney of Rooney’s Inc., based in White Sulphur Springs. Arnold describes his role primarily as “bringing a historic log cabin back to life by putting a modern foundation underneath it, bringing it up to current, well-insulated thermal standards, and making it a very well-built modern structure at its core.” Rooney and the crew he gathered — about two dozen others, including builders, electricians, plumbers, and craftsmen — took ultimate pride in “preserving one of the county’s historic buildings.” 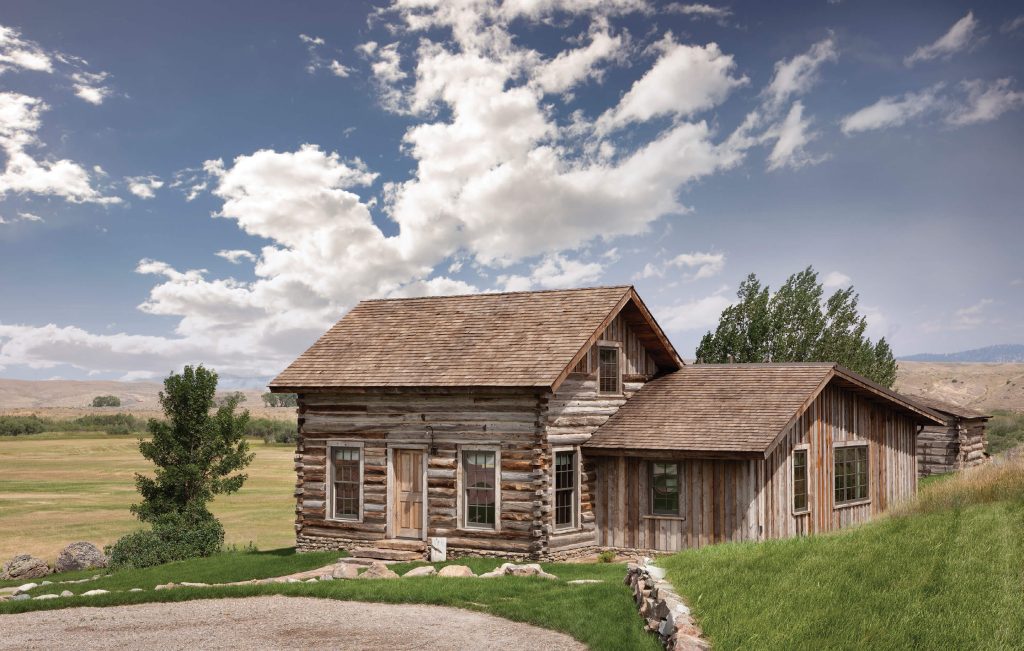 A path of Flatwillow Moss Rock from Bozeman’s Quarry Works leads to the cabin’s front door.

Arnold knew from the start that the complex task of deconstruction and reassembly — elevating it to modern standards — had to be a precision process. To that end, he hired Ryan Darling of the Missoula-based Verify 3D to conduct a laser scan of the entire cabin. “That effectively allowed me to measure each individual log without having to walk around with a tape measure, and to focus more on the character of those logs and the existing building’s structural integrity,” the architect says. Rooney and his team made the most of the original logs, reusing an estimated 80 percent of them, and replacing those found to be rotting with sound ones from another cabin of similar vintage. “We cut and fit them in, notching them at the corners to make them look like the old homestead’s,” the contractor notes. 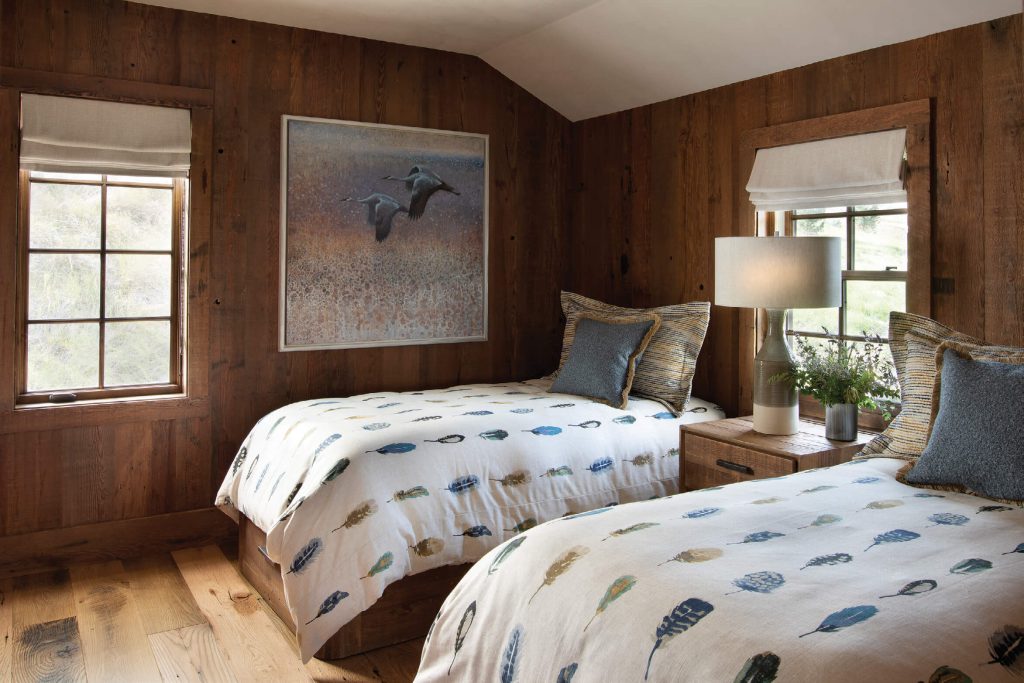 New walls, floors, and bed frames made of reclaimed barn wood give this bedroom a fresh yet rustic ambiance. Reflecting local avian life is the oil-onlinen painting “Two Sandhill Cranes,” by Ewoud de Groot and feather-patterned duvet covers in Limosa fabric from Harlequin.

The reconstruction process, however, amounted to far more than merely piecing together a life-sized, three-dimensional jigsaw puzzle. On top of a new foundation that includes a full crawl space for modern mechanical systems, they built wood-framed walls filled with thick foam insulation and covered with lath-and-plaster for the interiors. The meticulously scanned and numbered logs, meanwhile, were then carefully milled to fit flush and be securely fastened to the exterior. In completing the basic structure — which also included removing a pair of low-ceilinged upstairs bedrooms to create a vaulted living room — they added modern double-paned, energy-efficient, divided-light windows and weatherproofed anodized-aluminum exterior frames that closely replicate the original fenestration. 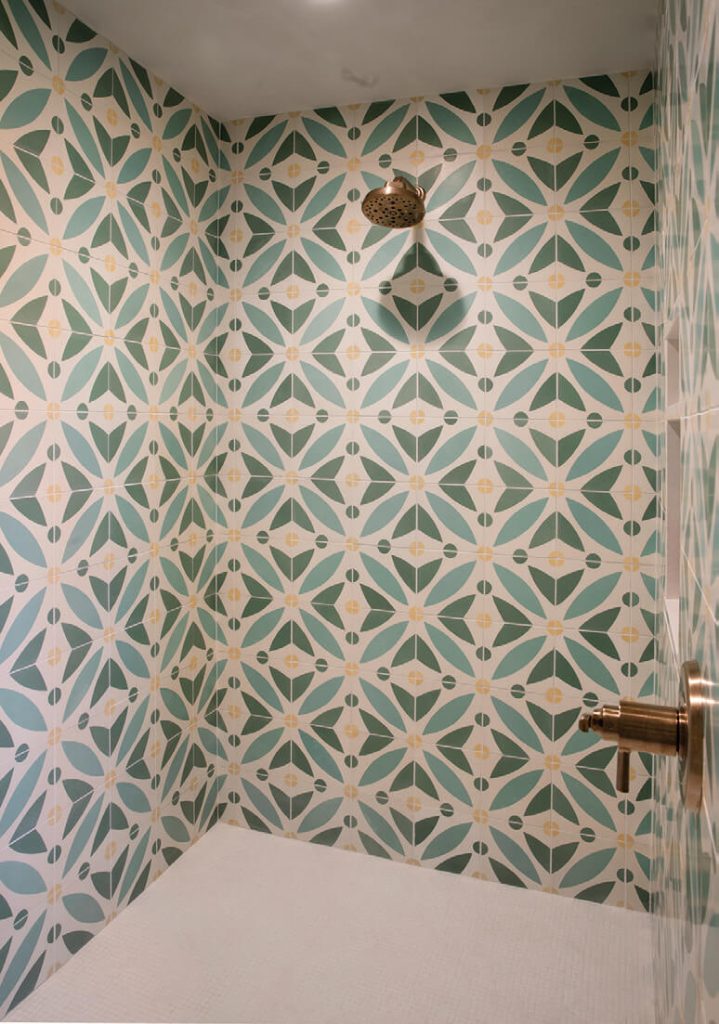 Once this was complete, the stage was set for Robb’s thoughtfully calibrated interior design, which reflects both the historic setting and more contemporary touches. In what she calls “a team effort” involving Arnold, Rooney, and lead designer Dana Talbot — along with the stalwart start-to-finish support and deep knowledge of property manager and lifetime local rancher Ron Burns — every element of the project effortlessly balances those two seeming opposites. Reclaimed barn wood, for example, not only provides the material for clean-lined contemporary cabinetry in the kitchen, bedrooms, and baths, but it also neatly panels some of the interior walls and harmoniously covers the floors. Clean-lined furniture is durably upholstered in comfortable fabrics that echo the colors of nature’s palette outside. Contemporary artworks portray the living creatures all around, including horses, owls, and sandhill cranes. 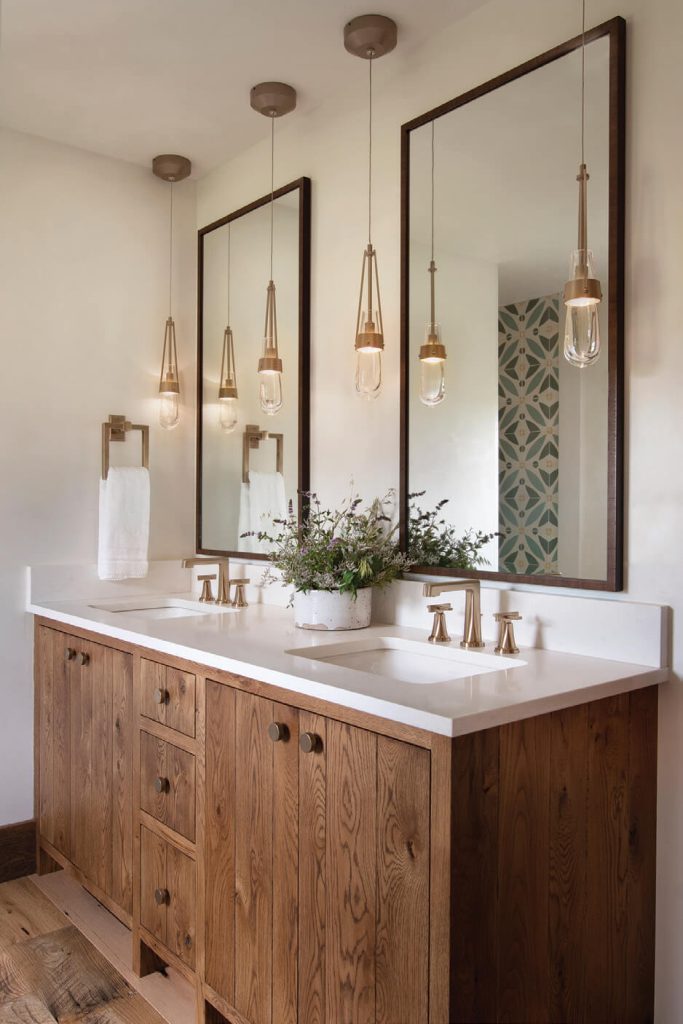 Meanwhile, decorative touches of blue — in the art, as well as in throw pillows and the feather pattern on guest-room bedspreads — echo the hue of the nearby trout-rich Smith River and the sky above.

The end result feels surprisingly intimate, befitting the modest 1,400-square-foot scale, yet also as bountifully, genuinely welcoming as Big Sky Country. “We could have made the front doorway grand, or added a fireplace to the great room, or made all of the windows bigger,” Robb muses. “But every step of the way, our goal was to focus on keeping the cabin authentic.” 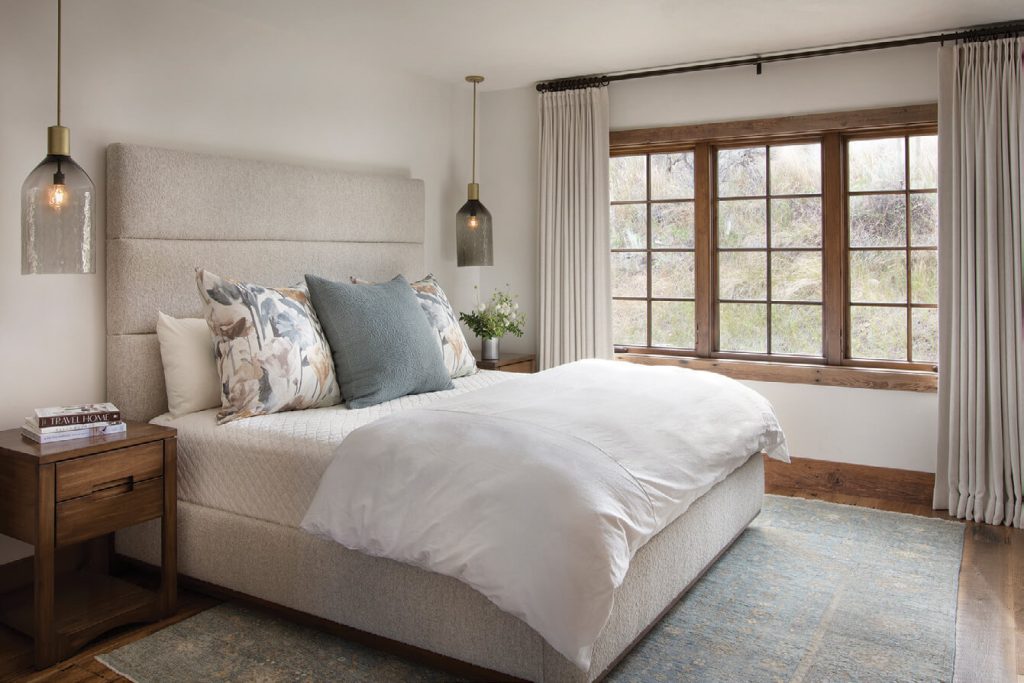 The primary suite achieves quiet Western elegance thanks to a king-sized bed in ash-toned Marrakesh linen from Westbury Textiles, which was custom-made by Epoch West Furniture in Bozeman. The company also crafted the nightstands.