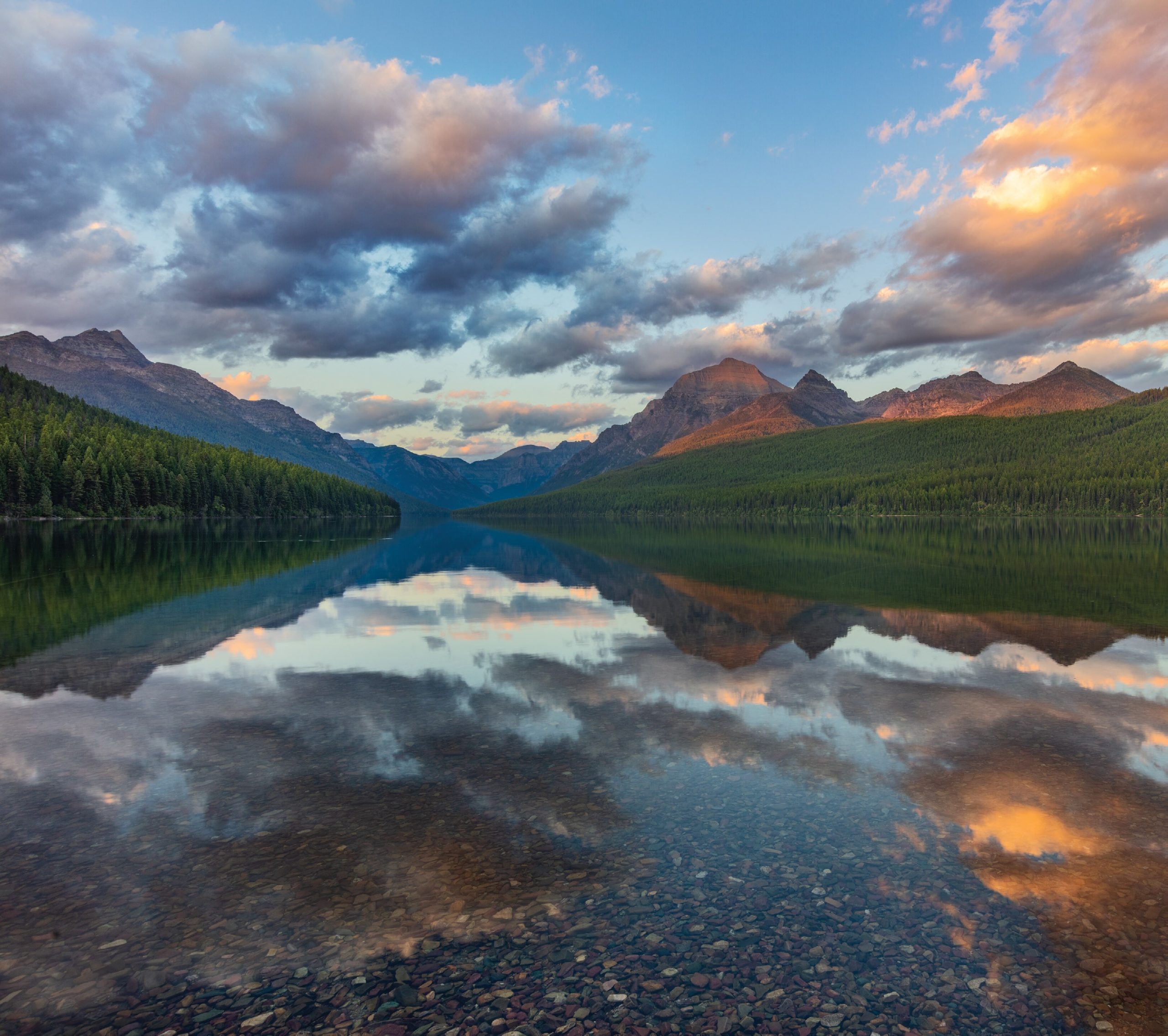 The crystalline waters of Bowman Lake are a spectacle to behold. | Photo by Chuck Haney

03 Feb The North Fork of the Flathead

Excluding the abbreviated and access-restricted 2020 season due to COVID-19, Glacier National Park, for instance, has averaged roughly 3 million visitors over the last five years. All-time records for July and August were established in 2017, with recreational visits for those months exceeding 1 million and 900,000 respectively. As of this writing, complete data for 2021 was not available; however, with more than 3.2 million tallied by the end of October, last year’s figure almost certainly eclipses the total for 2017. 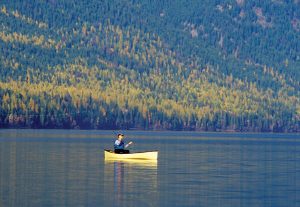 Western larches accentuate the slopes above Kintla Lake, especially in the fall, when these deciduous conifers start to change color. | Photo by Chuck Haney

Solitude-seeking travelers might consider the area from the Camas Creek entrance of Glacier to the Canadian border, which encompasses the valley of the North Fork of the Flathead River and is the least-frequented sector of the park. Although it’s still wild and remote, the North Fork is, unfortunately, no longer Glacier’s best-kept secret. 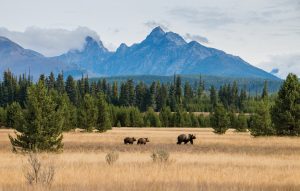 With coniferous forests and the towering peaks of the Livingston Range as the backdrop, a grizzly leads her cubs across a distinctive vista that’s accessible from the Inside North Fork Road. | Photo by Laura Verhaeghe

Nevertheless, the ambiance of the North Fork is palpable and best experienced when human traffic there is minimal, making shoulder-season visits ideal. Given the primitive condition of the North Fork’s roads, motorists should allocate a full day to touring this region, particularly if they want to visit both Kintla and Bowman lakes. By contrast, hikers and backpackers could easily devote a week or more to exploring every nook and cranny, should they be able to obtain backcountry permits for the Boulder Pass Trail, which traverses some of the most rugged and spectacular terrain in America. 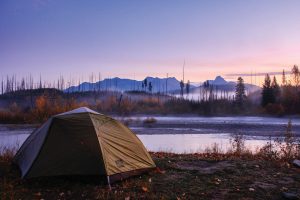 A secluded campsite in the remote North Fork area is a vision of tranquility. | Photo by Laura Verhaeghe

Leaf peepers gravitate to the North Fork in late September and October. Best known for its high concentration of western larch — a deciduous conifer that typically exhibits peak color in late October — this region hosts two separate fall-foliage seasons. Like their counterparts on the park’s east side, aspens and cottonwoods in the North Fork usually don their brightest autumnal cloaks of yellow and orange during the last week of September and first week of October. However, North Fork aspens achieve greater stature than those found in groves east of the Continental Divide due to less severe weather and the absence of harsh winds that regularly buffet aspens indigenous to the Rocky Mountain Front. Predictably, the riparian corridor of the North Fork of the Flathead is most heavily accentuated by impressive aspen-cottonwood stands. 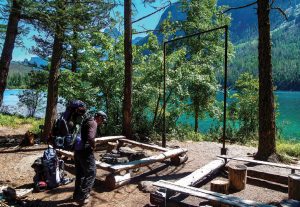 Located 6.3 miles from the Boulder Pass trailhead, this picturesque backcountry campsite sits at the head of Kintla Lake. | Photo by David and Shannon Biegel/Enjoyyourparks.com

Outside & Inside North Fork Roads

These access routes parallel opposing sides of the North Fork of the Flathead River. Motorists who truly appreciate a long, leisurely backcountry drive can follow the Outside North Fork Road from Columbia Falls, where it is initially designated as Montana Highway 486, for 57 miles to the Canadian border. Because it’s elevated above the river, this road periodically affords views superior to those from the southern portions of the Inside North Fork Road. 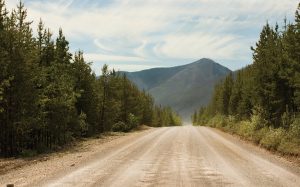 Heading northbound on the Outside North Fork Road (Montana Highway 486) toward the Canadian border, the natural backcountry quietude is all-encompassing. | Photo by Jeremie Hollman

For the quickest route, take the fully-paved Camas Road for 11 miles, from Apgar Junction to Glacier’s Camas Creek Entrance. Turn right, cross the North Fork of the Flathead, and follow the Outside Road north for 13 miles to the Polebridge Junction. Cross the river again and, from the Polebridge Ranger Station, take the Inside Road to Bowman Lake via a spur road, or Kintla Lake Campground, where it ends approximately 40 miles from West Glacier. Collectively, these roads provide a superb introduction to the serenity and topographical character of the North Fork area, which contrasts significantly with the terrain that’s traversed by the Going to the Sun Road, particularly its alpine segment. 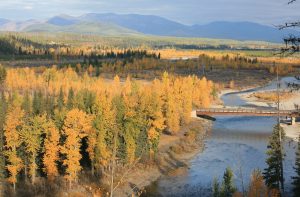 During the North Fork’s fall foliage season, the aspen and cottonwoods peak in late September and the first week of October, before the western larch trees display their crescendo of color in late October. | Photo by Jeremie Hollman

Described by some as the “North Fork’s Last Best Outpost,” the Polebridge Mercantile is a designated National Historic Landmark that’s renowned for its delicious baked goods. | Photo by Chuck Haney

Completely off the grid, Polebridge resembles a frontier town and is centered around the red, false-fronted Polebridge Mercantile, which looks like a remnant from a Clint Eastwood Spaghetti Western. Ironically, this National Historic Landmark is best-known for its bakery, a feature that did not exist until 1994, when Dan Kaufman purchased the Mercantile. A third-generation baker from Idaho, Kaufman owned “the Merc” for 15 years and developed most of the recipes for their renowned pastries, including the scrumptious huckleberry bear claws. 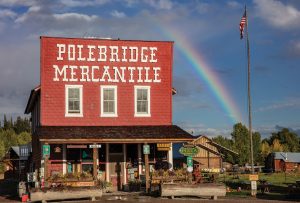 Described by some as the “North Fork’s Last Best Outpost,” the Pole- bridge Mercantile is a designated National historic Landmark that’s renowned for its delicious baked goods. | Photo by Chuck Haney

The Northern Lights Saloon also reflects the area’s rustic homesteading past. The original one-room log cabin — built by Merc founder William Adair in 1912 — serves as the main dining area for the saloon, which was converted into a restaurant in 1976. Similarly, the North Fork Hostel was once a large mess hall on the McFarland Ranch in Big Prairie, prior to it being disassembled, transported by truck, reassembled, and opened for business in 1979.

As previously noted, Bowman Lake is accessible by a spur road that begins 0.3 miles north of the Polebridge Ranger Station. Its size — the third-largest lake in Glacier — and proximity to Polebridge make it a natural draw for kayakers and canoeists. In addition, the network of trails that emanate from this glacially carved gem offers numerous opportunities for hikers and backpackers. The Quartz Lake Loop and trails to Numa Ridge and Akokala Lake are comparable in length, ranging from 11.2 to 12.8 miles round-trip. The Numa Ridge Lookout Trail, with a 3,000-foot climb over 5 miles, poses the greatest challenge to cardiovascular conditioning. 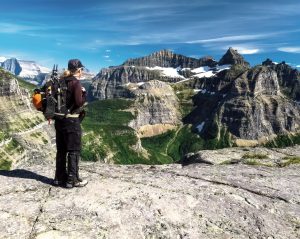 The alpine segment of the Boulder Pass Trail traverses some of the most spectacularly rugged landscapes in Glacier and provides, arguably, the park’s premier hiking experience. | Photo by David and Shannon Biegel/Enjoyyourparks.com

More adventurous souls may want to tackle the Bowman Lake Trail in its entirety. This 13.8-mile (one-way) hike terminates at Brown Pass (6,255 feet) and can be completed as an out-and-back trip or, in conjunction with portions of the Boulder Pass Trail, part of a longer excursion to Goat Haunt Ranger Station (22 miles) or Kintla Lake Campground (36.6 miles). The 2-mile segment immediately west of Brown Pass provides spectacular views of iconic peaks in Glacier’s northern wilderness, notably Boulder Peak, Thunderbird Mountain, and Mount Cleveland, the park’s highest summit. Landscape photographers prioritize the Bowman Lake area in late October, when its densely concentrated stands of western larch are typically at peak color. 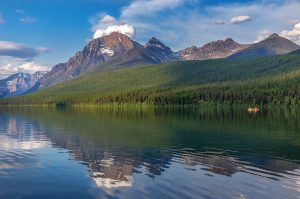 Given their size, as well as the serenity and solitude they afford, both Bowman (pictured here) and Kintla lakes are popular with boaters. | Photo by Chuck Haney

From Polebridge to Kintla Lake, the Inside Road exposes visitors to a variety of features unlike those seen elsewhere in Glacier. Riverine stands of cottonwoods and aspens accentuate the shores of the pristine North Fork of the Flathead. Pockets of grassland contrast sharply with adjoining coniferous forests. Big Prairie, for example, is surrounded by an island of aspens, set against a backdrop of lodgepole pines, which, in late September, presents an intriguing compositional attraction for photographers. To the east, the towering peaks of the Livingston Range are a constant companion. Arrival at the Boulder Pass Trailhead, 0.3 miles from Kintla Lake, signifies the end of a long, bumpy drive.

David and Shannon Biegel, creators of enjoyyourparks.com, describe the Boulder Pass Trail as “one of the premier overnight backpacking hikes in not only Glacier National Park, but in all of North America, [one that encompasses] some of the most remote country in the lower 48 states.” This trail may, indeed, constitute the crown jewel of the Crown of the Continent.

Destined ultimately for Goat Haunt Ranger Station, the trail covers 31.4 miles one-way and follows the north shores of Kintla and Upper Kintla lakes for the first 11.6 miles. The ascent to the west side of Boulder Pass (maximum elevation 7,478 feet) involves a nearly 3,000-foot climb in just over 3.3 miles. Visitors to this site will encounter stands of young alpine larch that, in late September, punctuate these windswept heights with extraordinary color. The 5.6-mile trail segment from the west side of Boulder Pass to Brown Pass offers an endless succession of jaw-dropping views, featuring Kinnerly, Kintla, and Boulder peaks to the west, and Thunderbird Mountain, Mount Cleveland, and Hole in the Wall to the east. Because of the altitude, seasonal access to alpine portions of this trail is short-lived, so hikers who secure coveted backcountry permits for the Boulder Pass region should consider themselves supremely fortunate. 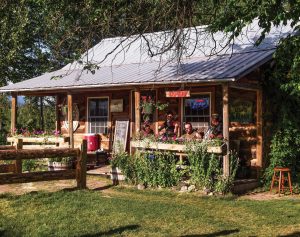 The Northern Lights Saloon in Polebridge is a rustic eatery and watering hole that hosts weekly live music throughout the summer. | Photo by David and Shannon Biegel/Enjoyyourparks.com

what you need to know

Ticketed-Entry Access for the North Fork
With the newly established ticketed-entry system for the Going to the Sun Road, summer traffic that is turned away from West Glacier has spilled over into the North Fork at an unsustainable rate. By 10 a.m., a solar-powered message board near the Polebridge Ranger Station typically indicates that “Parking is Full” at Bowman and Kintla lakes. Consequently, a press release issued on December 13, 2021, states that, for the first time, Glacier will implement a ticketed-entry system for admission to the Polebridge and Camas Creek entrances. Valid for one day, access tickets to the North Fork will be required from May 27 through September 11, 2022. Tickets can be acquired through recreation.gov beginning in early March.

Road Conditions
Roads in the North Fork are rough, and the phrase “rattles the fillings out of your teeth” does occasionally come to mind on sections of the Outside North Fork Road. That descriptor is more frequently applied to the Inside Road, particularly as it approaches Kintla Lake. On the other hand, four-wheel-drive and high-clearance vehicles are not absolutely necessary for travel in this area. Although I would not recommend it on a regular basis, we traversed the Outside Road from Columbia Falls to Polebridge and the Inside Road from Polebridge to Kintla Lake in a 1998 Honda Accord, so common sense and appropriate speeds are more important than specialized vehicles.

Weather
Montana weather is, of course, the wild card. Given its isolation, roadside services are virtually nonexistent in the North Fork and, should you need them, exorbitantly expensive. In the event of inclement weather, exercise appropriate caution and, if need be, observe the adage that discretion is sometimes the better part of valor, especially in late October when the allure of western larches at peak color must be weighed against a forecast of significant snow in the high country.