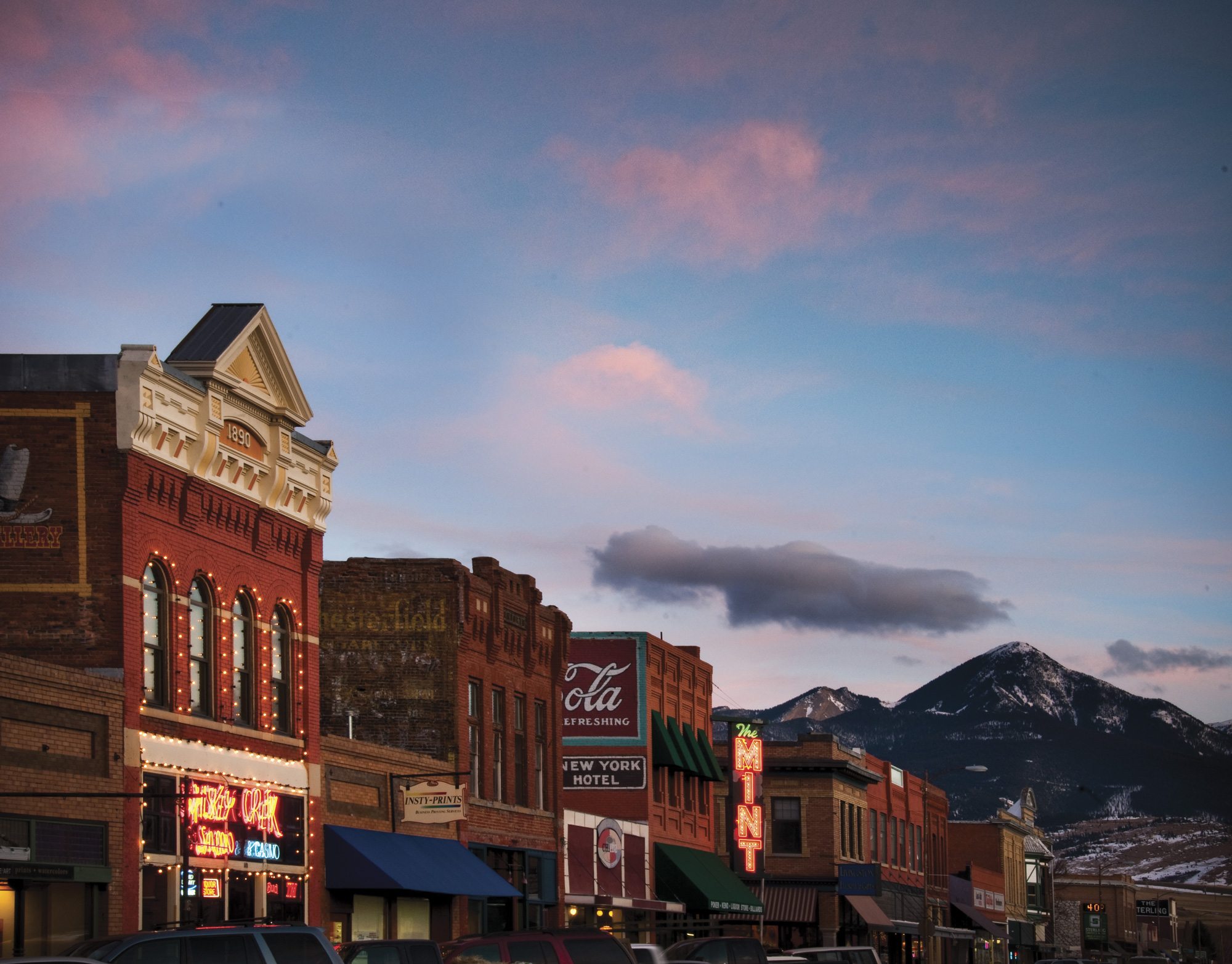 23 Jul Dining Out: The Mint Bar

The Mint Bar. Arguably the most popular name for a drinking establishment in Montana (with The Stockman a close runner up), these saloons pepper the state from Main Street to the hinterlands. I wouldn’t say they have the best cuisine in Montana, or even the best drinks. But what you get from a Mint bar is a slice of ambience and individuality that is quintessentially Montanan.

“You can’t put a price on a good time,” proclaimed Dave Hinkel, tipping back a long-necked bottle. “That’s why you’re at the Mint.”

Looking down the weathered bar of the Martinsdale Mint, you see a cross section of this community of 40 people, a quarter of whom are in the bar. An old rancher sits atop a stool. Next to him is a cylinder of oxygen tubed to his nostrils. There are three young Hutterite men playing pool. Dressed in black jackets with broad shoulder pads; they chide each other in German.

“It’s the only thing open in town,” explains the bartender, Nora. “It’s kind of a meeting place. I get calls all the time asking where Mr. such and such is, and usually I know.”

Dogs aren’t allowed in the bar anymore, but the pooches hold court on the doorstep. You can tell who is inside by the dogs that greet you as you go in.

The Mint in Martinsdale is unique in itself. But, like most Montana Mints, it is a good lens into the character of the town. The bar has been moved three times as the town has shifted from the south bank to the north bank of the Musselshell River and finally relocated along the path of the railroad higher up a hillside.

Errol Teig is taking a break from his ice house on a nearby lake full of browns and Kamloop rainbows. Errol’s fishing buddy, George, is his senior by at least four decades and helps sort out the local history.

The walls of the bar are lined with a dozen spectacular mule deer buck mounts. Closer inspection reveals every trophy was harvested in 1943 and ’44. George explains how all the men were off fighting the war and ammunition was very hard to come by. The wildlife was untouched for years, so when the soldiers returned, they found large, fearless bucks wandering the hills.

According to the state’s liquor licensing division, there are 16 Mint bars across the state. And they’re predominantly inhabited by locals. Legend has it that “The Mint” moniker is associated with the mining boom in Montana. While cattlemen went to the Stockman bar, miners and railroad workers went to the Mint. Many towns have both of these establishments within a stone’s throw of each other.

In Whitehall, the Mint bar burned down in an eerie and unexplained fire just a day after a city block in Bozeman was leveled when a gas line ruptured and was ignited by a light switch. Whitehall residents gathered across from the old Mint as it burned.

The town is resilient in coping with the ebb and flow of work from the nearby Sunlight mine. Six months after the explosion, the new Mint was already set up a block down the road from the old spot. The walls are adorned with burnt mementoes, including a scrap of charred sweatshirt reading, “The Mint,” and a drawer full of stationery goods fused to a plastic tray.

And on a Saturday at one in the afternoon, the stools are full and the keno machines are chiming. The state government implemented a smoking ban shortly after the new Mint in Whitehall opened as a nonsmoking bar in anticipation of the ban. Most of the regulars moved over easily, says Bobbie. Ninety percent of the bar’s patrons are locals, she explains, “and I love gettin’ ’em drunk.” She keeps a trophy photo album of passed-out drinkers on her cell phone.

Most of the patrons know each other. They might work at the local mine, drive a semi or wrangle on a nearby ranch, but they all come to the Mint for a drink.

Bill Risher tells stories of local misdeeds: bar fights, vandalism … general trouble. All his tales start with the disclaimer, “He was really a good guy.” You have to believe him: Bill is known as Brother Bill, since he’s an ordained minister and has performed several weddings and even a funeral.

“I’ll have you perform my funeral,” says another frequenter. “Let me check my calendar and I’ll get back to you on the date.”

Montana’s first Mint was started in the historic railroad town of Livingston by, fittingly, two train conductors. Just after prohibition, the two Burlington Northern conductors retired to launch the bar and were issued the state’s first liquor license. The foundation of the bar is literally steel train rails. According to the current owner, Merlin Moss, The Mint in Livingston was a hangout for droves of railroad workers who would cash their paychecks at the bar.

“They say the bar used to have more money than the banks,” Moss said.

The Livingston Mint was known for its poker games, having as many as 15 tables going at one time, with some of the games lasting days. The bar recently under went an extensive restoration to its 1930s interior, but poker players can still find a game in The Mint’s back room.

The bar enjoys a little Hollywood flash, having been featured in the 1987 movie Amazing Grace and Chuck and the 1992 film A River Runs Through It.

Food comes in many forms to Mint customers. In Lewistown, you’ll be served an upscale meal on a white tablecloth.

“The town is a lot like this bar: friendly and inviting,” says Lois, sipping a glass of wine with her husband. For example, when Lois thought she would have to close the doors of her owner-operated Lewistown quilting shop, possibly for a few months, some local quilters took it upon themselves to run the store while she was away — and they wouldn’t take a dime of pay.

Chef Jay Bentley and his wife Mary have turned their refurbished Mint into a local institution in Belgrade. Known for great martinis, selective wine list and some of the finest steaks in the state, at the far end of the bar is the “wall of fame” featuring black and white photos of some of Bentley’s best customers.

In Sunburst, near the Canadian border, every Friday is “Burn Your Own Steak Night”. They supply the steak, and you cook it to your specifications on a grill behind the bar. Located eight miles south of the Montana/Alberta border crossing, the Sunburst Mint was converted from a 1930s church and is a place where you can sin and repent at the same time.

On a rainy Saturday night in White Sulphur Springs, a group of floaters primed to begin a journey down the Smith River wander into one of the many incarnations of the Mint bar. Behind the bar, a brown-rooted, near-40 blond smiles over her cigarette.

“What can I get for you boys?” her voice scrapes along the back of her throat, growling out the words.

The bar seems desolate, with only a few bearded locals bowed in their seats. Beer-labeled mirrors adorn the walls. A stained quarter-pool table is sunken into a dimly-lit back room.

The request for “nuclear chicken,” a Mint specialty, is top priority for the hungry bunch led by a local outfitter who has been through this door before. The bartender throws breaded chicken chunks into a round metallic device that looks like a 1960s pressure cooker. The cylinder is filled with oil and the heavy lid is screwed on, closing like a bank vault. It might be called nuclear chicken because if anything went wrong with the archaic device, the bar would be leveled.

As the crew sits at the high-tables sipping cold Budweiser — no micro brews here — one of the fishermen notices the black streaks on the linoleum.

“Yeah, we had a few bikers in last night,” the bartender says. “They thought it would be fun to squeal wheels out of the bar.”

She shrugs. “Another day in the Mint.” 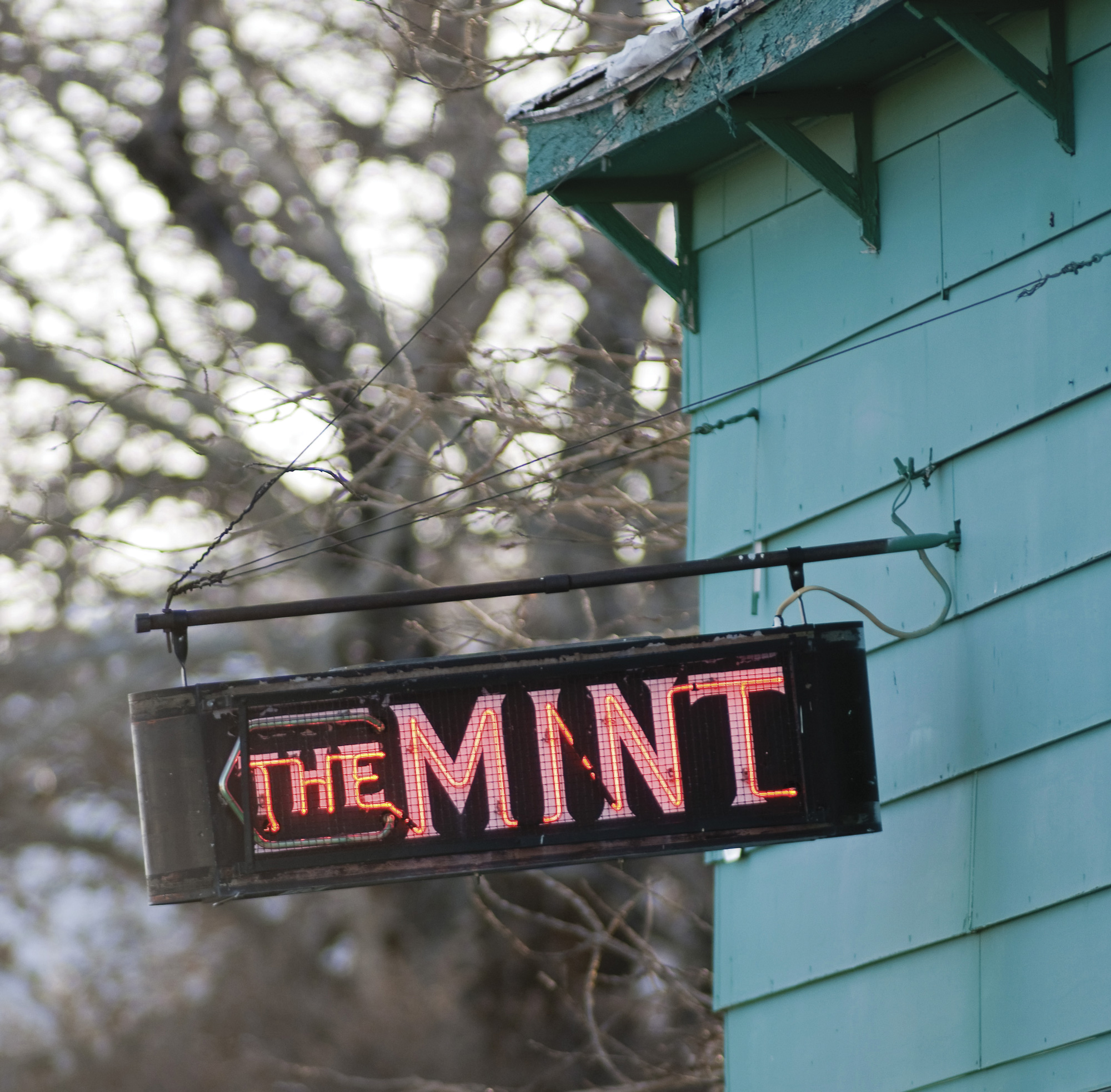 A regal beckoner of barley pop for patrons is the neon sign at The Mint in Martinsdale, Mont. Photo by Tony Demin 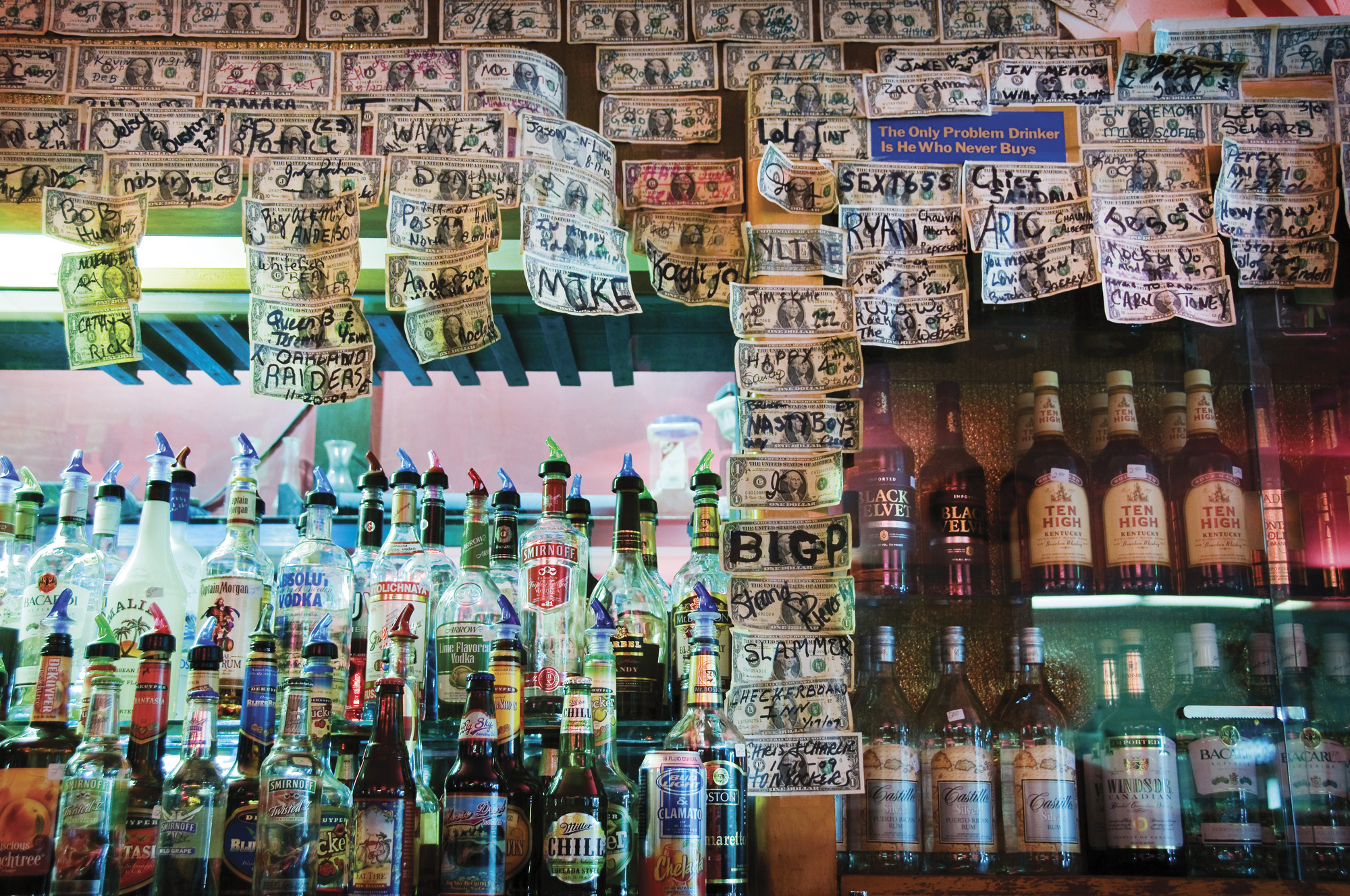 Dollar bills with black marked notes adorn the bar back of the Townsend Mint. Photo By: Tony Demin 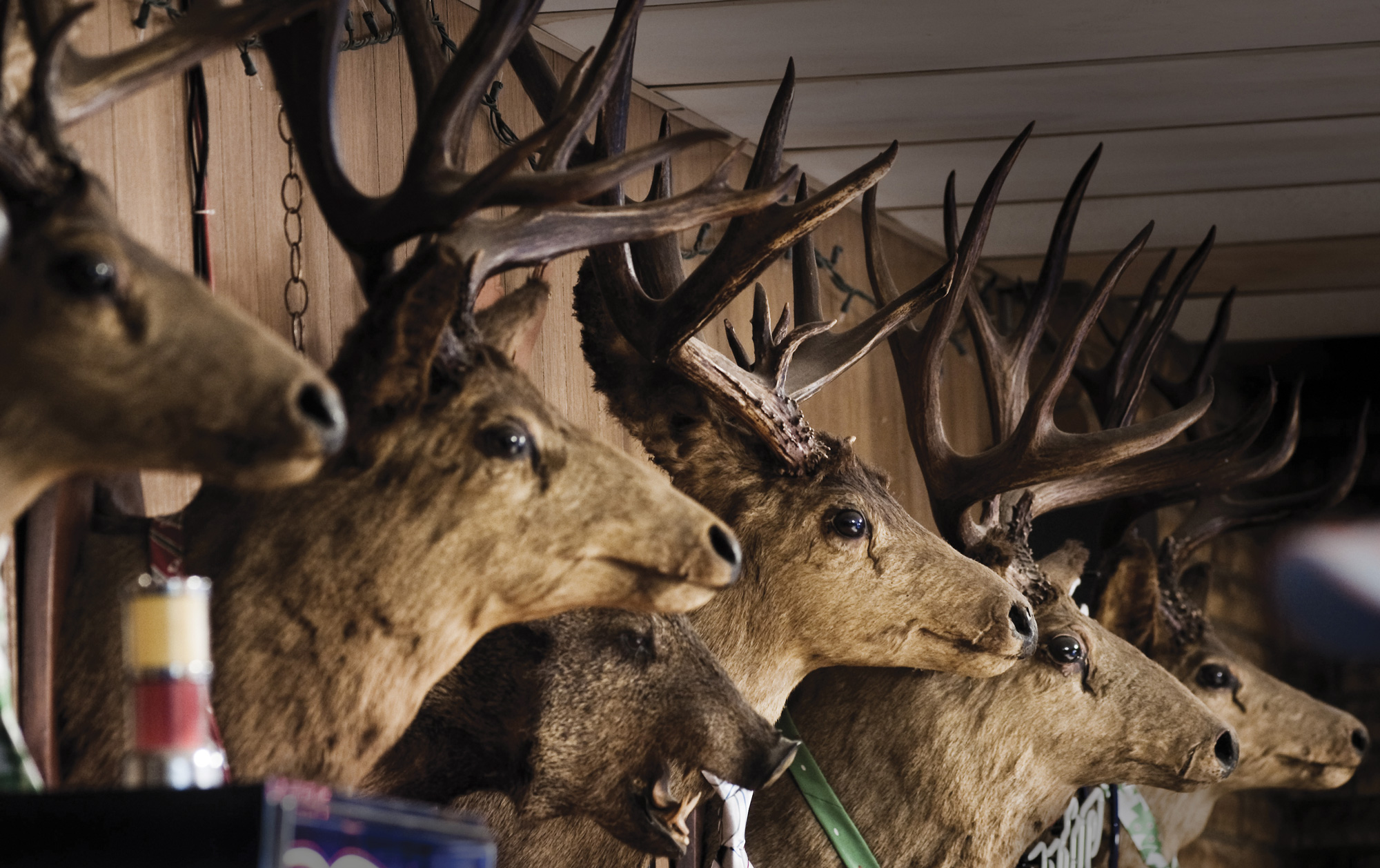 Impressive trophy mule deer line the walls of The Mint in Whitehall. All of these bucks were shot in just a few years at the end of WWII when men returned with ammunition to find deer populations which had not been hunted for years. Photo by Tony Demin 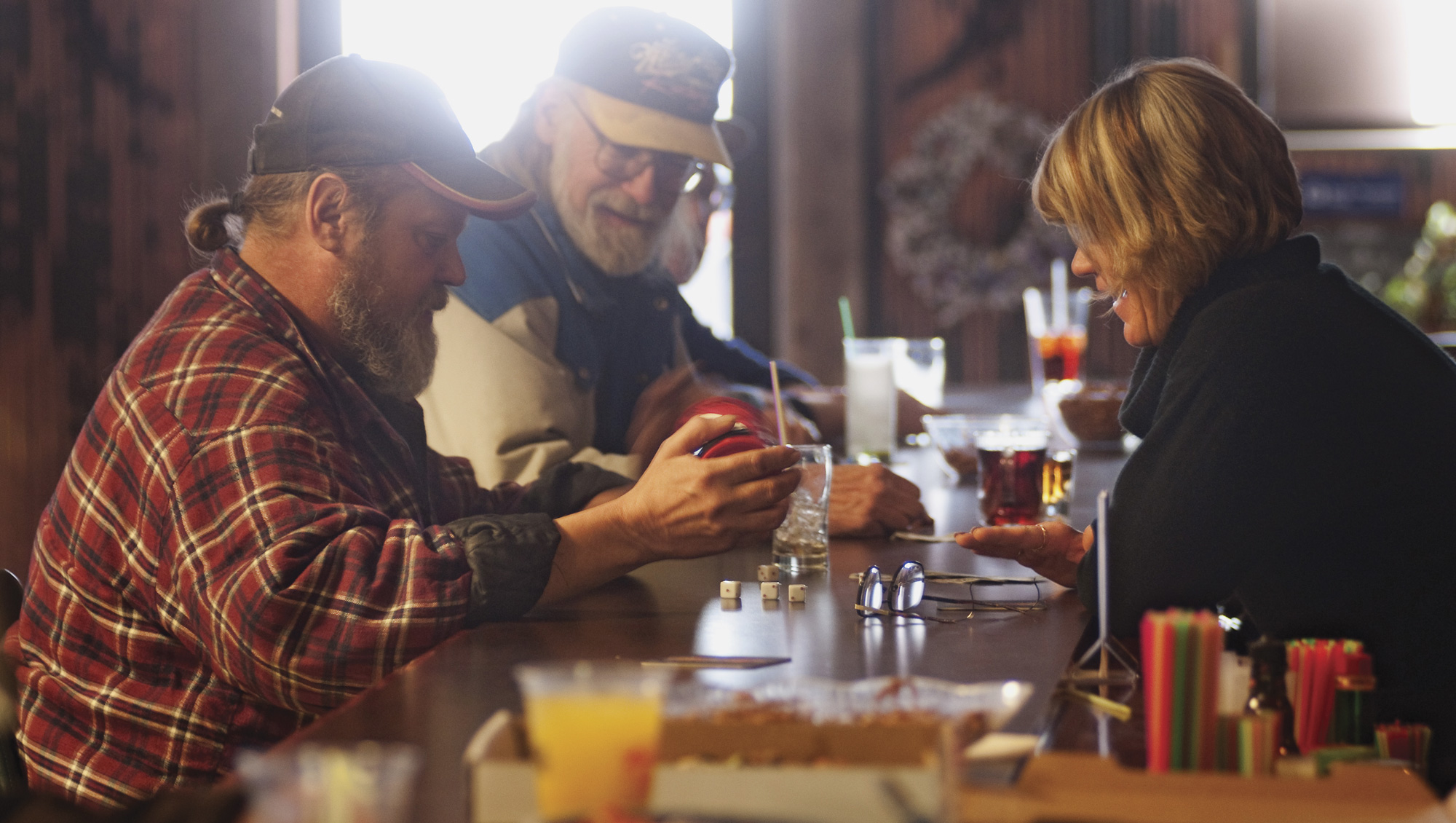 A shake a day can earn you a few bucks in the Whitehall Mint. Photo by Tony Demin 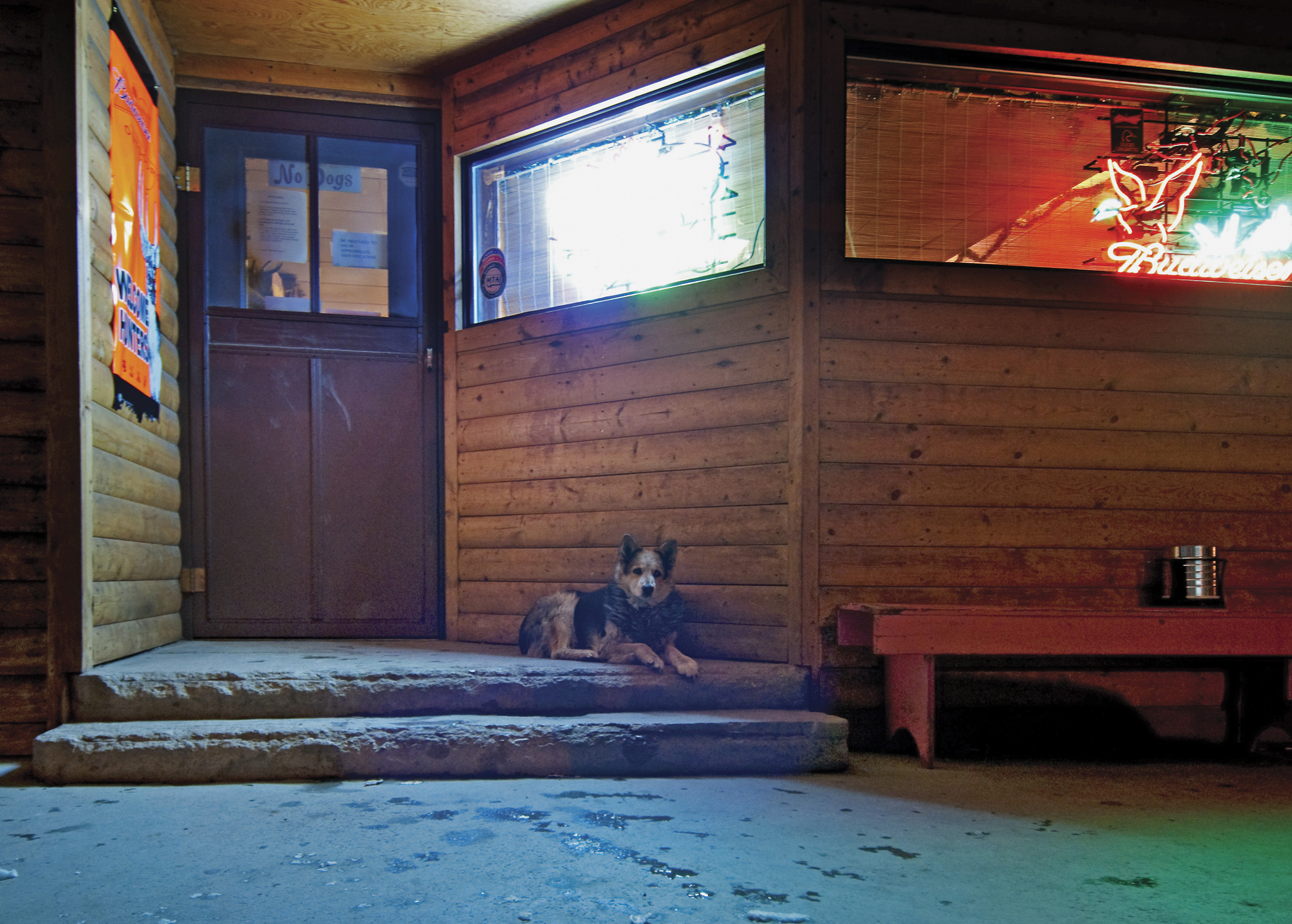 The clouds churn over the top of Main Street Livingston with a Mint Bar tucked neatly in the middle — just where it should be.