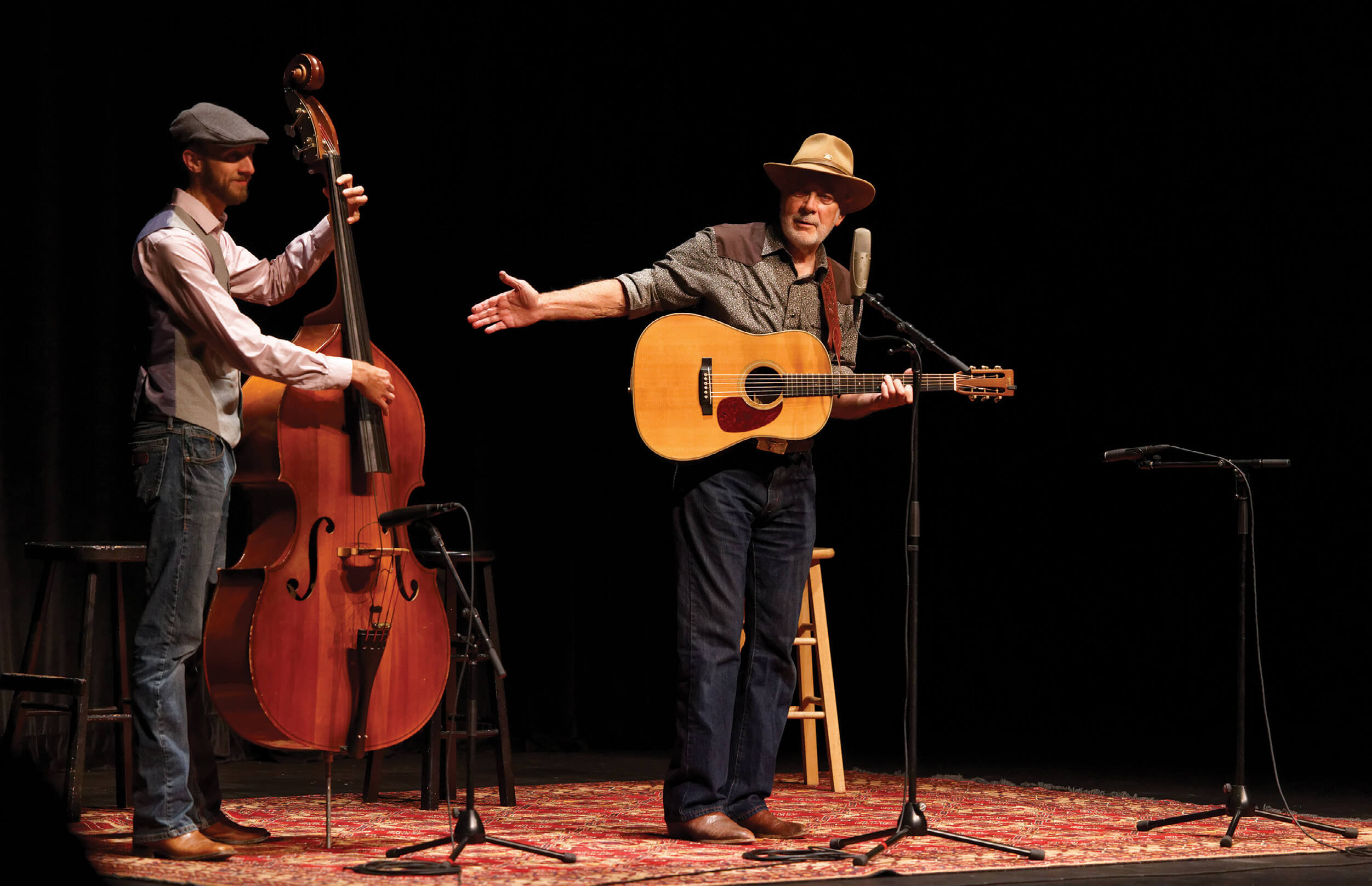 A performer walks on stage, acoustic guitar in hand, and a hush falls across the audience. Approaching the mic, the performer — who signed up just a little over an hour ago and has never performed at this venue before — begins strumming and singing. The audience is quietly listening, marking every note and word with tapping feet and nodding heads. This is all part of the Hootenanny tradition, a weekly Jackson Hole, Wyoming celebration of music and community that’s still drawing crowds after more than half a century.

The summer shows are usually held outdoors, under the pavilion at Dornan’s in Moose, which is located on a private piece of land within Grand Teton National Park, about 12 miles north of Jackson. As musicians share their songs under the pavilion, audience members take in Teton views from pavilion seats, picnic tables, lawn chairs, and blankets, often enjoying food and drinks from Dornan’s as they listen. With winter temperatures in Jackson sometimes plunging into the negative, organizers take the music indoors to avoid frostbitten fingers and shivering spectators. Many winter performances have taken place at Dornan’s as well, though last year the show was moved to The Wort Hotel’s Silver Dollar Showroom in downtown Jackson, where it will return for this year’s winter season. A special Hootenanny is held in the town of Jackson, at the Center for the Arts, each September as well. Regardless of season and venue, the event offers a rich history of musical magic in the valley. 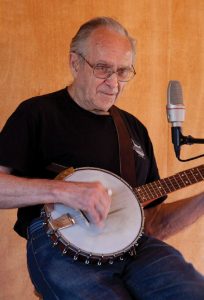 Bill Briggs is the co-founder of the Jackson Hole Hootenanny, which he created with Dick Barker over half a century ago. Photo by Irene Mellion

Legend and lore say this musical tradition was established in the 1950s under a bridge spanning the Snake River. Originally dubbed “Teton Tea Parties,” these musical events were put together by Bill Briggs — the first person to ski the Grand Teton in 1971 — and Dick Barker, a pioneer of the local rafting scene. The gathering was formalized in 1993, when it was re-established as the Jackson Hole Hootenanny and held at Dornan’s. Despite an occasional change in venue (including short runs at Snow King Sports & Events Center and the Silver Dollar Showroom), the event’s thumping heart has remained the same: acoustic music performed for an audience by anyone who has the courage to sign up.

Over the years, performers have included a varied array of local musicians and visitors, including Ben Winship and Ramblin’ Jack Elliott. In 2008, documentary filmmaker Juliet Sonnenberg produced Hoot in the Hole: The Story of the Jackson Hole Hootenanny, a 90-minute film that explores the history of this musical tradition and includes interviews with regular Hootenanny performers as well as recording artists who have visited the stage. 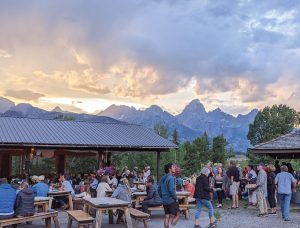 In summer, the Hootenanny is generally held at the pavilion at Dornan’s, which is located on a private parcel of land within Grand Teton National Park. Photo by Byron Tomingas

“You get a wide range, from the very first beginners all the way through to professionals that have done it for decades,” says Byron Tomingas, who estimates he has performed at a few hundred Hootenannies over the years. Tomingas, who was born and raised in Jackson and holds a degree in classic guitar from California Institute of the Arts, is mostly an instrumentalist but he also performs vocals. “I’m a classic guitarist but have a rock-and-roll background, so I know how to play with wild abandon. I’m not afraid to get wild and crazy with the guitar,” he says. “You get such a variety of music [at the Hootenanny] because you get young kids, you get the gray-haired clan, you get the middle group, you get professional artists traveling through that stop in and play.” He recounts a time many years ago when John Denver took a turn performing, borrowing a guitar and using his given name rather than his stage name. 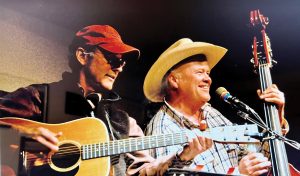 John and Pete Carney perform together. Photo by Irene Mellion

The Hootenanny is an all-acoustic show intended for a “listening audience” — where audience members don’t chat and talk; they actually listen — which provides a unique, sometimes intimidating experience for the musicians. “You’ve got to give it to this Hootenanny audience that has been there for so many years,” Tomingas says. “They’re a listening audience — this is huge — and it scares anybody who has played in noisy bars and things like that. It scares them to death because they go in to play and the audience gets quiet. They want to hear every note you make.”

Tasha Ghozali, who has played at the Hootenanny since 2015, agrees. “The quiet concert setting, as they call it, is pretty special,” she says. “Even as a professional musician, I don’t get to perform to a room that is relatively quiet very often. It certainly allows for a better connection between performer and audience.” 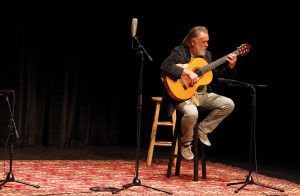 Byron Tomingas (pictured here) has performed at a few hundred Hootenannies over the years. Photo by Jackson Hole Center for the Arts / Karissa Akin

Performers show up a bit early to sign up for a slot, and anyone can fill in their name to take a turn. If the schedule isn’t too full, performers can share a couple of songs, but if there are a lot of people waiting for a chance to play, most keep it to one song to allow more people to take the stage. The one criterion for performers is that they may only use acoustic instruments, though the music is amplified so the crowd can hear it. The acoustic instrumentation is an intentional choice, which Tomingas explains as the founding concept of showcasing natural music in as natural a setting as possible.

Backstage prior to the show, performers congregate and a singer may ask if anyone can accompany him or her on a certain song. An instrumentalist will likely volunteer, and a brand-new duo will perform together for the first time, perhaps not even knowing each other’s names before, in a bit of Hootenanny magic. “Whole groups are formed like that, so that’s one of the exciting parts, the camaraderie between musicians backstage is really wonderful,” Tomingas says.

Sometimes chance Hootenanny meetings turn into love stories. Ghozali, of Tasha & The Goodfellows, first started performing at the Hootenanny in 2015. She sings everything from jazz standards to blues, country, classic Motown, pop, and even reggae from time to time. “I came to sing a couple of songs one day in winter of 2015 and just kept coming,” she says. During the summer of 2015, she met her now-husband, Rob Sidle, at the Hootenanny and they started playing music together before beginning to date in 2016. They married in 2020 and just celebrated their second wedding anniversary at the Center for the Arts Hootenanny. It’s only fitting since Ghozali estimates she’s attended at least 150 Hootenannies, maybe closer to 200. Ghozali and Sidle regularly perform in the Jackson area, sometimes as a duo and sometimes as part of a five- or six-piece band. 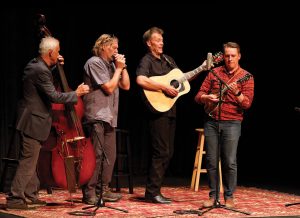 Connections at the Hootenanny aren’t uncommon. In fact, they’re a big part of why the event is so special. Christine Stevens started playing at the Hootenanny around 10 years ago, when she was visiting her father in Jackson. Since moving to the area a few years back, she’s become a regular Hootenanny performer. “For me, [the Hootenanny] has been my way of finding a community of musicians here,” she says.

Stevens is a professional musician who plays standard percussion, hand percussion, and guitar, in addition to singing. She recalls a time when she was performing and singing one of her father’s favorite songs — “Ain’t She Sweet” — for him from the Hootenanny stage. She looked out and realized that her father, who had Alzheimer’s, had joined a group of strangers and was tapping his feet and snapping his fingers right along to the music. “When I got off the stage, they all said, ‘It was really nice meeting your dad,’” Stevens recalls. “[The Hootenanny] has that quality of deep things happening. For me, that was a moment I’ll never forget, singing to my dad, who died last year, so it was really memorable. No matter how old you are, I think music awakens people’s joy no matter what condition they have.” 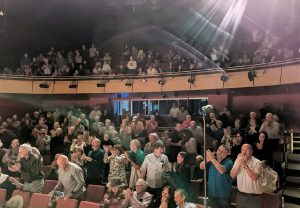 Wherever it is held around the valley, the Jackson Hole Hootenanny comes alive with music year after year. Photo by Byron Tomingas

The Hootenanny brings people together to share music and melodies, along with companionship and camaraderie. “This is one of the finest pursuits because nobody is trying to take anything from anybody,” Tomingas says. “This is a gift, and they’re doing it for free, and they’re doing the best they can and presenting it hoping people will like it. That’s a pretty nice situation.”

Likewise, Stevens finds the experience of being a performer very satisfying — almost as enchanting as being an audience member. “It’s something that really feeds my soul, more so as a listener than a performer,” Stevens says. “I just love the harmonies, and I love the quiet where you can actually hear the musicians, and it’s not super over-the-top loud. It’s all acoustic and that’s what makes it have its flavor of the mountains.”