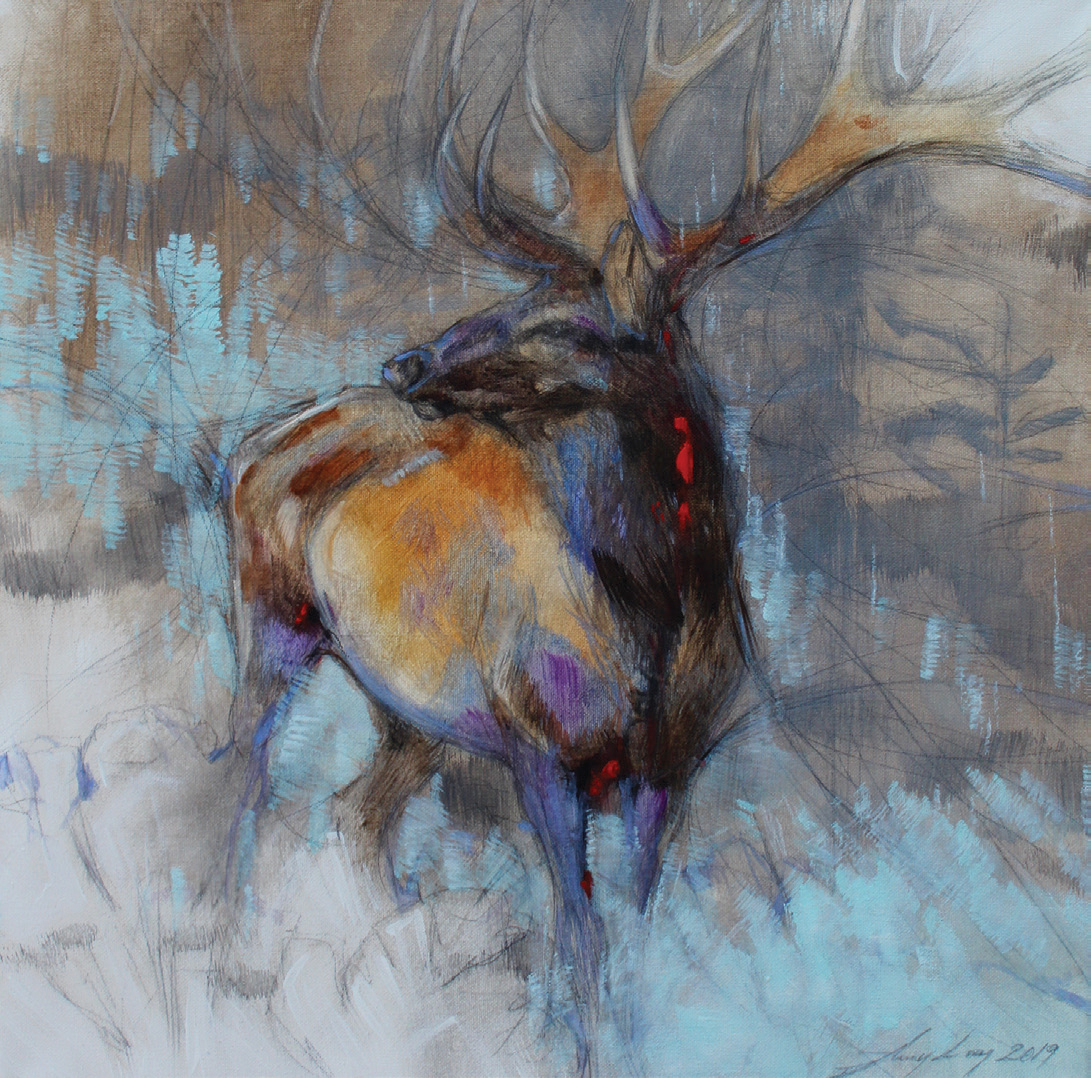 ATTRACTION, ATTACHMENT, AWE — all come with having a sense of place, a strong resonance to one particular locale on Earth, which speaks to us in a language that feels tailored to our hearts. For artists, this sense of place serves as a generous wellspring for inspiration. With paintbrushes in hand, they translate the languages of their most beloved and intimately known landscapes. And with singular style, they render the terrain, animals, light, and people through which those places continuously express themselves.

Artists Amy Lay, Kathy Wipfler, Amy Ringholz, September Vhay, and Kathryn Turner all paint Jackson Hole, Wyoming, but each woman portrays it in a uniquely impactful way. “The Jackson Hole Five,” an exhibition that took place this past winter and spring at the Booth Western Art Museum in Cartersville, Georgia, showcased the influence of one iconic place on five different artists.

“We really thought there was a unique bond that these five artists shared, all living and working in Jackson Hole,” says the Booth’s executive director Seth Hopkins, who conceived the show with museum curator Lisa Wheeler. “The flora and fauna and dramatic landscape around Jackson Hole are really deep in all of their work,” he adds. “They all go out and photograph, sketch, or observe wildlife in nature, and it shows in the essence of their paintings. This not only provided a unifying theme for the exhibit, but it also gives their work a lot of its power.”

The works exhibited in “The Jackson Hole Five” ranged from down-to-earth depictions of landscapes, horses, and working cowboys to modern and mystical portraits of wild animals. 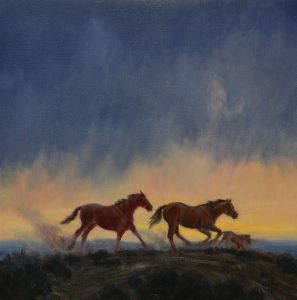 “Painting is my voice to others, telling of the relationship I have with nature,” says Amy Lay, whose ethereal wildlife paintings are made with pencil, charcoal, and oil washes. “I have a heavy watercolor influence in my work and try to maintain that with oils. By using a thin wash, I’m able to let my original pencil line drawing show through. I think it gives that raw, lively feel.”

Lay’s paintings often synthesize two or more kinds of animals. They illuminate the interconnection of all forms of life and tell this important truth through imagery that feels enchantingly dreamlike. And the fantastical nature of Lay’s paintings comes from a deliberate reliance on her own imagination. “I try to limit my use of reference photography,” she says. “I think this gives my animals a look that is all mine — not realism, but whimsy.” In Lay’s Teach Me the Raven Ways, a bear’s cobalt-colored paws communicate kinship with a gathering of deep blue ravens. 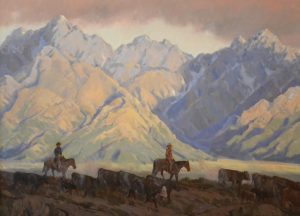 “My relationship with the West and the wildlife within it is absolutely an intimate and powerful one. It has been a passion for my entire life,” Lay says. Though she’s recently returned to her native Oregon, living in Jackson Hole for 10 years was crucial to her journey as an artist. “The environment in Jackson Hole was so invigorating. It’s a place where nature and the arts are quite honestly worshiped and revered. It played a pivotal role for me as an artist and how I developed my career.”

Kathy Wipfler’s career has been similarly nurtured by this world-class ski town. “I came to Jackson in 1980 with a desire to learn to paint from life, which I had held since I was in second grade,” she recalls. “Jackson was a hub for buyers of Western-themed art and had several fine art galleries, plus all the landscape painting opportunities I could want.”

Wipfler’s work indelibly captures the moody, transcendent beauty of Jackson Hole’s landscapes through all four seasons. She paints on location and works mainly in oil, “which allows for manipulation during the process,” she explains. 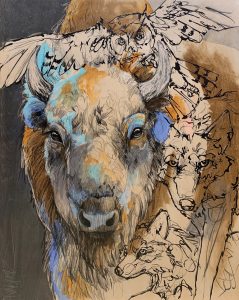 “Outdoor painting is very spontaneous because of the ever-changing light effects on the landscape.” She sometimes seeks out and paints landscapes captured by great Western painters who’ve come before her, including Maynard Dixon and Thomas Moran, effectively maintaining a tie to the past with her present-day work, while celebrating the enduring magic of the places they portray.

Wipfler often helps out with ranch work when her friends need an extra hand. Some of those experiences, at once prosaic and unforgettable, also find their way into her paintings. During her early years in Jackson Hole, she helped with a morning cattle drive beneath the stately peaks of the Grand Tetons — taking a route that’s no longer practical due to 21st-century car traffic. Her piece Morning Drive preserves this facet of Wipfler’s biography and Jackson Hole’s history. 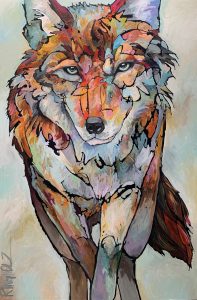 On the opposite end of the spectrum from Wipfler’s style, Amy Ringholz’s works have a modern, abstract sensibility, yet her subject matter — the area’s wildlife — is timeless. Lively line work and vibrant colors make her ink and oil paintings reminiscent of abstract stained glass. She also uses colored pencils on wood for a softer effect. “It keeps things refreshing … to go back and forth between the two mediums,” she says. “The feeling of pushing oil paint around the canvas or the sound of drawing on wood is equal to the idea of playing beautiful music.”

Indeed, there’s something orchestral, even operatic, about Ringholz’s bold paintings. At first glance, they might appear playful. But the eyes of her subjects are intensely emotive, lending depth to the paintings while communicating the compassionate heart of the artist. “Wildlife is abundant here,” Ringholz says, “and it is wonderful to be able to take my own spin on painting [the animals] and representing them as characters with different personalities and emotions.” 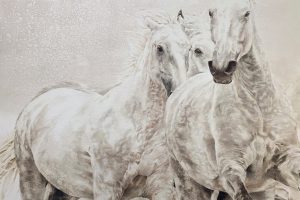 The bear she depicts in Cloudburst, a work of acrylic and graphite on wood, has a delicately nuanced expression that invites a viewer’s ongoing contemplation. Ringholz’s love for animals goes back to childhood, and she remains attentive to their individual subtleties. “When I was small, I collected pictures of animals as my hobby,” she says. “Things in my everyday life, like the temperaments of my dogs and chickens, often find themselves in my [painted] foxes and bears and rabbits.”

September Vhay is similarly attuned to the expressive powers of animals, especially horses. “I create quite a bit of equine work, as horses were a part of my upbringing,” she says, “so their moods, gestures, and personalities permeate my art.” Whether she’s capturing the spotted coat of a leopard Appaloosa or celebrating movement and joy in Banjo, an oil-on-linen that captures the awkward beauty of a newborn colt, Vhay loves these four-legged symbols of the West. And other animals inspire her too, including “a hummingbird zipping by in the spring, or a herd of deer on my parents’ ranch, or a bear sighting in Grand Teton National Park.” 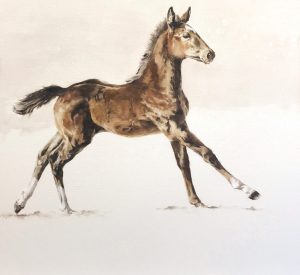 Vhay brings her creatures to life with watercolor, oils, and charcoal. The first medium has helped to shape the fresh, spontaneous, and light-handed look of her paintings, which are actually planned with great care. “The freshness of my work goes back to my early years as a watercolor painter,” she says. “Since watercolor cannot be altered once the color is laid down, it forces one to make thoughtful decisions before starting. I do studies to determine the values and compositing of every piece of artwork, regardless of the medium. This planning creates a sense of freshness, as I rarely go back and rework a piece.”

And an abundance of white lends a serene quality to her paintings. “This valley inspires a sense of peace in the composition and the palette of my work,” says Vhay, who planned to stay in Jackson Hole for a single ski season, but instead has called it home for the 22 years since. “Jackson has a way of holding onto one’s soul,” she says. 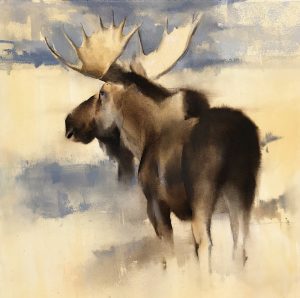 Perhaps none of these artists feels this more keenly than Kathryn Turner, the only Jackson Hole native of the bunch. “I was beyond blessed to have been born and raised on my family’s ranch inside of Grand Teton National Park,” Turner says. “Being surrounded by the breathtaking views from there is the precise reason I became an artist. … My paintings are a love letter to this valley.”

Turner’s work possesses palpable strength and contagious emotion beneath its soft, impressionistic surface. To paint the head of a white horse against a white background, she recalled her earlier study of horse skulls and their elegant structures. The result is a moving marriage of beauty and precision. With its evocative title, Strength in Yielding, the painting expresses the power of surrender.

Wild animals have been as constant in Turner’s life in Jackson Hole as the landscape itself. She loves birds, and her brushstrokes give the illusion of their rapidly flapping wings. “My father is a zoologist and conservationist,” she says. “Because he was always rehabilitating injured wildlife species, we always had animals in the house: eagles, owls, ravens, coyotes, elk. As a kid, I thought everyone had those kinds of pets. To this day, I feel a special connection with the wildlife of this area. It’s my hope that my paintings can bring a greater awareness of and appreciation for the importance of wildlife conservation.” 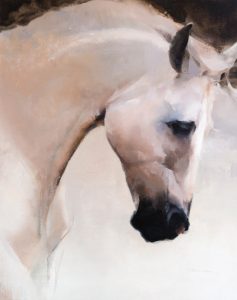 Conservation, preservation, protection: these are all extra dimensions to the work of “The Jackson Hole Five” artists, whose paintings do more than provide aesthetic pleasure. They capture the natural world when the necessity for holding onto its many faces and facets is more urgent than ever.

“I wanted to create a sense of unity between species,” says Lay, whose portfolio includes an elk-butterfly hybrid. Her words about her own paintings are equally applicable to human beings’ relationship to the natural world and to one another, as well as to “The Jackson Hole Five” exhibition itself: “Even though you’re different,” Lay says, “you can still flow together beautifully.”