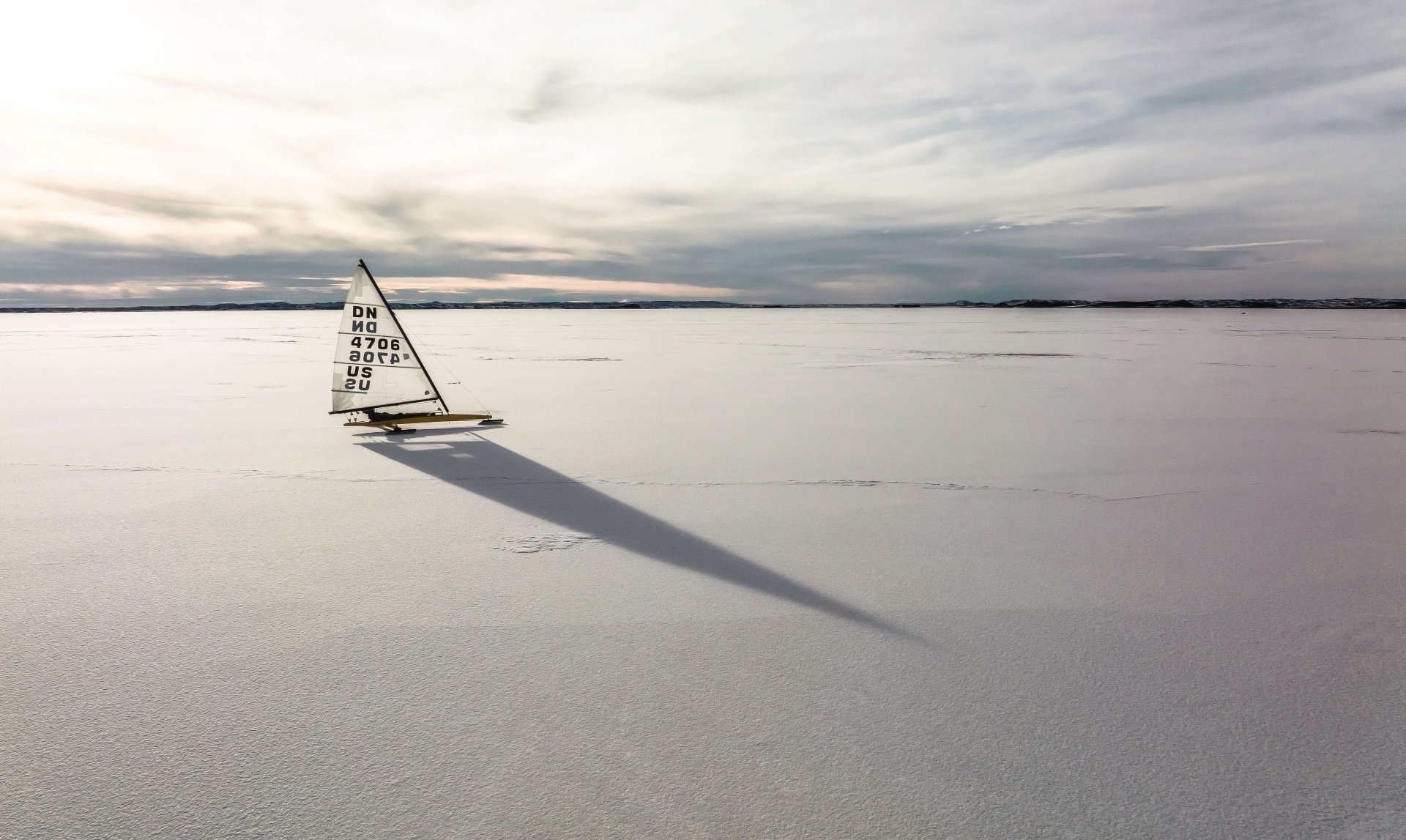 Just as surfers will spend the balance of their year waiting for just the right wave, and skiers will rearrange their lives in pursuit of fluffy mountain powder, so do ice boaters watch for fresh ice and stiff winds. They’re monitoring long- and short-term weather forecasts for their version of powder days, says Flathead Lake ice-boat builder John Eisenlohr, one of the dozens of Montana winter sailors who travel the West in search of perfect ice. “For us, that’s the first black ice thick enough to play on, plus a certain amount of wind,” Eisenlohr says. “Not too much wind, and no packed snow on the ice. And, if I’m really lucky, the ice will have just a little stippling on it to hold the runners.” 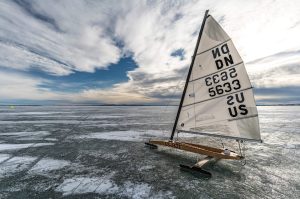 A DN-class ice boat waits its turn to ride the wind on frozen Fort Peck Reservoir prior to the start of the North American championship race in 2020.

The runners are the steel skates on these minimalist boats, themselves made out of thin laminates of plywood and epoxy that usually weigh far less than the pilots who sail them. There’s not much to these boats, just a fuselage — called a hull — with room for a single pilot, and outriggers that contact the ice with gleaming metal runners. These crossarms also have cables leading upward to a mast that carries the sail. Think of one as a wooden cross pushed by the wind — often at alarming speeds — as the pilot lays on his or her back in the hull and navigates by pulling a rope that fills the sails and by tilling a front steering runner. These craft are the winter equivalent of single-person dinghies that ply what ice-boat captains call “soft water,” or any water that has the misfortune of being thawed. In their simplicity, they’re not unlike Flexible Flyer sleds, harnessing wind instead of gravity for their propulsion.

Just as soft-water sailors have races, regattas, and flotillas, so too do these ice boaters, who get together to compete, commune, and share their affection for their boats and a tradition that predates outboard motors and snowmobiles. “Ice boating has been a sport in the United States since at least the 1800s,” says Tim Ogrinc, who sails northeast Montana’s Fort Peck Reservoir in the winter. “There were ice-boat clubs throughout the Northeast. It was the fastest mode of transportation at the time. In fact, an unofficial speed record of 107 miles per hour was set in an ice boat back in the 1800s. That was far faster than the steam-powered trains of the era.”

The modern ice-boating movement dates to the 1930s, when The Detroit News hosted a workshop where fathers and sons were invited to build inexpensive boats that could cruise frozen lakes and rivers as a family-friendly form of Depression-era entertainment. The DN boats still carry the newspaper’s designation and are by far the most popular class of ice boats, with clubs in most northern states, across Canada, and throughout most European countries that honor ice-skating traditions. Fort Peck Reservoir hosted the International DN Ice Yacht Racing Association’s North American championship back in 2020, an event that may return to Montana later this winter, if conditions are right.

Montana’s ice-boating tradition started on the wind-blasted lakes along the Rocky Mountain Front, says Eisenlohr. “A group of ice boaters — displaced Midwesterners — built boats in Choteau and formed what they called the Teton Ice Boat Club back in the 1970s,” he says. “They’d sail Freezeout Lake and Bynum and Tiber reservoirs. That activity trickled down to Canyon Ferry Lake, which really became the epicenter of ice boating in Montana.”

For years, Ogrinc, Eisenlohr, and other boaters gathered in sufficient numbers to hold winter regattas and sail the reservoir’s expansive south end. Canyon Ferry, with its pushing wind and long stretches of even ice, was proposed as the site for a world speed-record attempt back in 2009, as British engineer Richard Jenkins sought to break the record of 125 miles per hour for a vehicle powered only by sail. For various reasons, the Canyon Ferry record attempt was aborted. 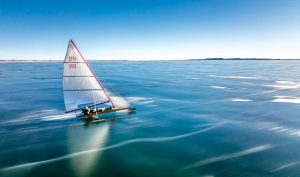 Ice boats require smooth ice and a stiff wind, both of which are in abundance on Montana’s prairie reservoirs.

If our warmer winters are killing fewer ticks and frustrating snow skiers, they’re also vexing ice boaters, who say the number of prime sailing days at Canyon Ferry is less consistent every year. “To get really good ice is a rarity, no matter where you’re from or where you go,” says Eisenlohr. “If there is any snow on the ice, it has to be fresh and fluffy so you cut right through it, but if the snow hardens up, you can’t ice boat any more. It’s done. You have to wait for it to evaporate or melt, so ice boating is a very fickle sport. You can’t predict it at all, because you need a perfect surface and wind. Keep in mind, ice is always moving, and on Canyon Ferry you have the [Missouri River] current and lots of points that influence ice conditions, plus expansion cracks that sometimes unexpectedly change during the day, and there are springs that can melt ice from the bottom up and you can’t always see that the ice is thin.”

“I work full time, too,” Eisenlohr adds, “so I can’t just go and sail whenever the ice and wind conditions are right. A great year for me is like 15 days of boating. Last year, I got one good day, that’s it.” 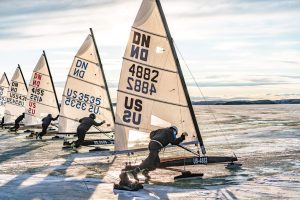 One reason Fort Peck has become attractive to the ice-boating community, in Montana and beyond, is because its ice conditions are relatively consistent. “On the first ice, you can go anywhere you want on Fort Peck on about 3 inches of ice,” says Ogrinc, who once sailed from The Pines Recreation Area to Fort Peck Marina, a distance of about 20 miles, in 25 minutes. “I can’t go that fast in my boat with a 150-horse motor,” he says. “The beauty of first ice is that there aren’t any pressure ridges. Same with last ice on Fort Peck, which can extend into mid-April, at least a month longer than most other Montana lakes.”

Whether the DN association will return to Fort Peck this winter, as planned, will depend on ice conditions, says Eisenlohr. “The thing is that those ice boaters are incredibly committed to racing,” he says. “They think nothing of driving 400 to 500 miles overnight to race on good ice. The guys from the Midwest absolutely loved Fort Peck when they came up here [in 2020]. It put Montana on the map for ice boating because when it’s good, it’s unbelievably good. Like, world-class good.” 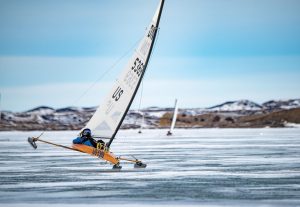 Ogrinc, who returned to the solitude and endless winter recreation in his hometown of Glasgow, Montana after years away, has developed plenty of other winter hobbies when the wind isn’t blowing or ice isn’t conducive to sailing. He skis and skates under a kite, mountain bikes frozen Fort Peck with studded tires, and practices “wild skating,” which entails hiking onto the lake, attaching skate blades to his boots in order to skate the ice, then removing the blades to hike out.

The pull of the ice

Most of Montana’s ice boaters are similarly diverse in their seasonal interests. When ice conditions deteriorate, or through the “soft-water” season before ice up and after ice out, they trade their boats’ runners for wheels and ride the wind on land. Many descend on Ivanpah Lake on the Nevada–California border. It’s a dry lakebed — think Lake Bonneville for wind riders — where Jenkins, sailing a land yacht, set the current world sail-powered speed record of 126.1 miles per hour back in 2009. It’s where Eisenlohr spends as much of the off-season for ice boating as he can.

But ice has a deeper pull for most sailors than the dry lake bed. “When the elements come together, it’s like magic,” says Eisenlohr of riding the ice. “When you sail on perfect ice, your adrenaline comes up. It might be super cold and super uncomfortable, but you have so much adrenaline pumping that you don’t get cold, and you don’t notice anything but the speed and the silence.” The only sound: the wind in your sail and your runners etching new ice. 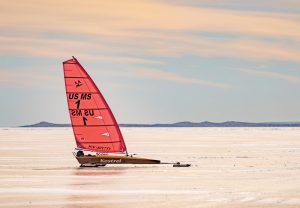 The physics of the sport holds unique appeal, as well. Eisenlohr says most ice boaters are drawn to the sport by the simplicity and elegance of the craft — many top ice yachters are cabinet makers and finish carpenters — and by the math, geometry, and applied physics required of the top pilots. “Everything about this sport depends on understanding math and science,” says Eisenlohr, who has won international and national racing titles, and who maintains a lively business selling boat designs and coaching amateur builders through the process of constructing the boat he designed: the Mini Skeeter. “I mean science influences everything, from the way you tune a boat to getting the right angle in the sail to the metallurgy of the runners to reading the wind to your weight balance to understanding the moisture content of the ice.”

Put together the right mix of materials, conditions, and angles, and even a light wind can translate into serious speed. “The formula we’re all chasing is that, theoretically, we should be able to generate 5.5 times the speed of the wind,” says Ogrinc. “So in a 10-mile-per-hour wind, you can do 55 miles per hour in your boat, and the acceleration is intense. Sometimes you will go from 4 to 5 miles per hour to 30 miles per hour in a matter of seconds. The sails can be sheeted, so that they’re almost flat, which allows them to generate their own lift. So, as long as you don’t have any drag, you can keep on accelerating, which is just as fun as it sounds.”

Too much wind, though, can cause the craft to become erratic, undoing boats and pilots. Suddenly shifting winds can blow boats off their lines and cause them to break apart or capsize. Sometimes boats sail into open water; sometimes they break through unobserved faults in the ice. “It’s an uncomfortable and difficult sport, but once people get hooked, they’re in for good,” Eisenlohr says. “I’ve been hurt a couple of times. I capsized and got a bad concussion and black eyes. I lost my steering and, when that happens, it gets really hairy. The front end gets a little light and then it doesn’t want to grip. That’s why I like the stippled ice, because it’s a little grippier. Glass ice is awesome, but not when it’s super windy ’cause your traction goes away because it’s too perfect a surface, and you need a little friction in order to maintain control.”

If the sport attracts thoughtful competitors with an eye for fine woodwork and elegant design, the skill and desire to build their own boats, and a need for speed, it also entices those who embrace the discomfort of lying on their backs, inches above the surface, zipping at 50 miles an hour on thin ice.

“Ice boating is, by definition, more dangerous than land sailing because of the possibility of freezing or drowning,” adds Eisenlohr. “The surface and conditions are less predictable. But that’s precisely why people are so into it. Because when the conditions come together, there’s nothing else like it.”