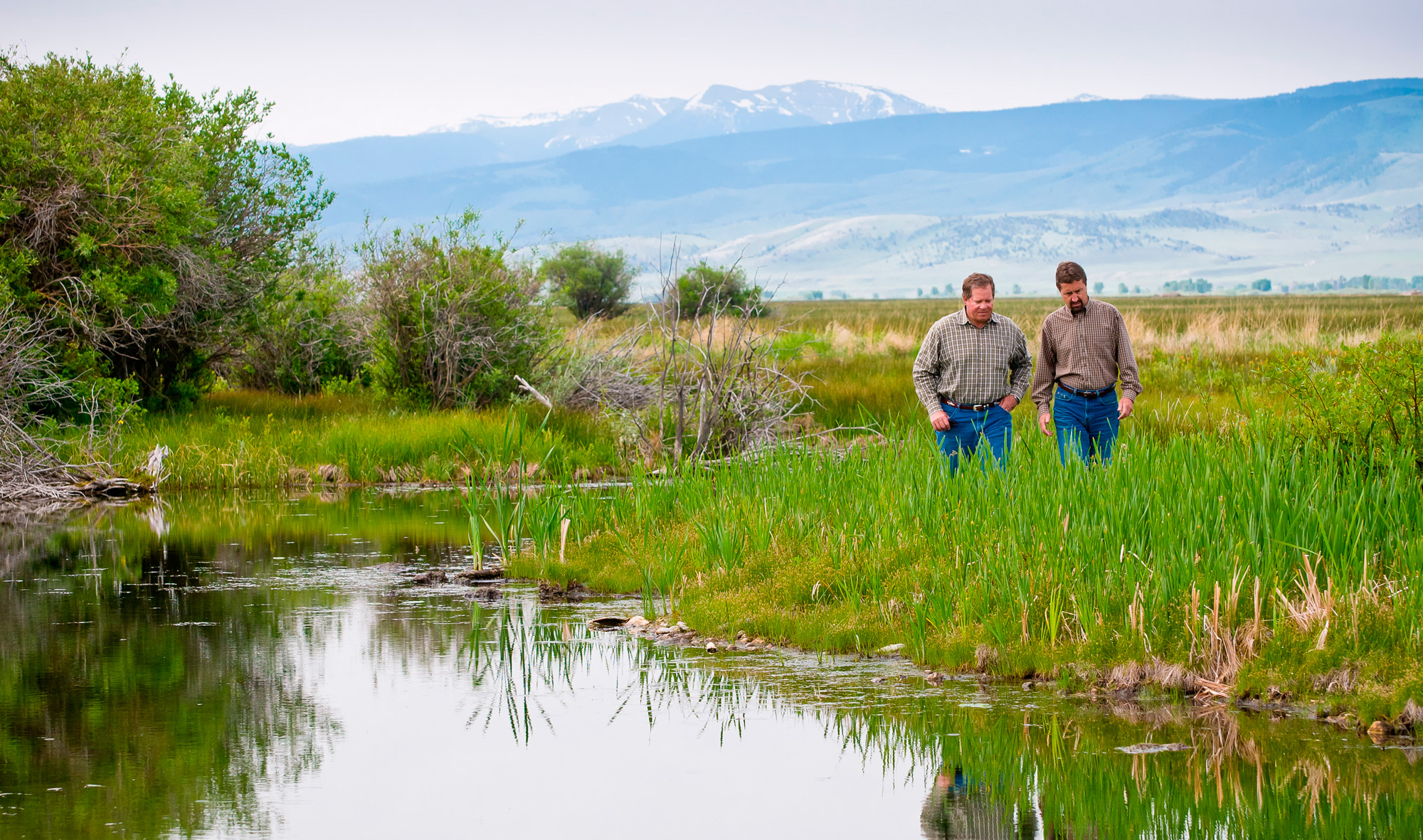 Surveying the Madison Rivery Valley with the naked eye, O’Dell Creek is all but invisible. It is only under closer examination of the working ranch land that the stream reveals itself to me. At the edge of a dry, wind-swept plateau, the land drops sharply revealing a lush wetland area teeming with fish and native birds once lost to this area. The contrast is striking.

The land, home to decades of cattle grazing, is now interrupted by this swath of winding river bottom wetland harkening back to the days when the land was untouched by man and machines. Through the efforts of Jeff Laszlo and his family, fifth generation owners of the Granger Ranch just outside Ennis, Montana, an ambitious restoration project has transformed miles of drainage ditches back to the stream’s original meandering path. Once a clogged artery of the Madison River, O’Dell Creek is now pumping clean, completely spring-fed, cool water through its channels.

The O’Dell Creek Headwaters Project has been hailed as the largest wetland restoration endeavor in Montana. Last year, The Laszlo family was awarded the National Wetlands Award for Landowner Stewardship by the Environmental Law Institute. The restoration results are impressive.

Sixteen thousand feet of drainage ditches, built in the 1950s for grass production, were filled, restoring more than 500 acres of wetlands and creating nearly seven miles of stream channel and adjacent riparian habitat.

The numbers only tell part of the story. As we tour the ranch, Laszlo’s deference for the land and this project are slowly revealed in his Will Rogers-style, common sense vision.

“I proceeded on faith because I knew absolutely nothing about this process. I knew one thing: That a stream was better than a ditch,” Laszlo says.

Laszlo came to fly fishing late by some estimates. It was about 25 years ago when he first picked up a rod as a way to spend more time with his father. As a result of fishing within the boundaries of their ranch, he came to appreciate it in a new way. For a long time, he never paid much attention to the ditches. That changed when he took over managing the ranch full time for the family. With more time to fish, the stream’s importance solidified.

“My interest was really in the fishery of the O’Dell which I had seen declining over the course of many years,” Laszlo says. “I thought the area had been overused for livestock grazing. When we started the project, we were on the tail end of a 15-year drought. A lot of the vegetation, which is important for holding the stream together, had vanished. The stream had become over-widened from erosion and livestock impacts. To get it back into proper shape again we had to narrow the stream, which in turn, raised the water column.”

When the area was drained decades ago, the water table was dropped and about six miles of drainage canals were deeply excavated into the ground to intercept water from this very wet area for agricultural production.

“In the 1950s, there was no other value to this land. Nobody gave a hoot about recreation or the environment, at least not to the extent they do today,” he says.

The restoration plan, developed with a host of players including one large partner in PPL Montana as well as 16 various federal and state agencies and non-profit groups, closed and filled all the drainage canals and re-routed the creek to its original winding path which was determined using topographical images. Once the hydrology was restored, experts predicted the wetland vegetation would also be restored along with everything that depends on that.

Five years into the restoration project, nature is displaying its comeback. Down in the ancient flood plain marking the course of a long-since vanished and much grander Madison River, there is a contrast — a clear line — between the yellows and browns where we watched cows and pronghorn antelope grazing to the blues and greens of emerging habitat. Laszlo peers through his binoculars and spots a bald eagle perched on a post, eyeing the creek. As if on cue, it takes flight. Laszlo’s pride in the rebirth of this special waterway is palpable.

Data show that prior to the restoration the vast majority of the fish in O’Dell Creek headwaters were small, about 3 to 4 inches in length. Now, according to Montana Fish, Wildlife and Parks, brown trout in the creek are measuring 11 to 13 inches and the population is more balanced.

The new channel configuration has improved the stream’s water flow levels as much as 25 percent periodically and it lowered the water temperature which now allows brown and rainbow trout to thrive. As a vital tributary of the Madison River all of these benefits are passed downstream.

The University of Montana’s Avian Science Center monitors the restoration area and has tallied more than 90 bird species, up from only four prior to the restoration, including 16 new waterfowl species. As many as 2,000 sandhill cranes have discovered O’Dell Creek and are using it as a pre-migration area.

“The healthier stream goes hand in hand with riparian habitat,” says Dr. Richard Hutto, director of the Avian Science Center. “The appearance of more bald eagles and osprey [is] all in response to a healthier aquatic insect scene. It is pretty astounding the great changes that have occurred really fast.”

One of the most important aspects of the restoration for fish has been the lowering of the water temperature. With the stream narrowed, increased speed of water flow and the addition of pool habitat and riffle features, the water temperature has been significantly reduced, reaching the optimum ranges — below 65 degrees — for trout, says Don Peters, a biologist who spent 30 years with Montana Fish, Wildlife and Parks and owns DJP Consulting in Missoula, a stream and wetland restoration company that worked on the project.

Now, the curves and bends in the stream reveal fine-sized trout rolling and leaping out of pools that appear as if they have been there, all along, for the last 50 years. The spongy ground is now reminiscent of 4,000 years ago when Native Americans used the area and it was a series of nice, bright stream channels teeming with fish, home to beaver and bison.

“One of the very special things about the project is that the restoration is not directed to a single element or species — it’s aimed at fish, migratory waterfowl, native birds, vegetative and water quality,” said Laszlo, who is quick to credit all those involved in the restoration for its success.

The Trust for Public Land worked with the Laszlo family to place conservation easements on the land permanently protecting 8,000 acres of wetland and 12 miles of O’Dell Creek.

“The conservation easements are the security blanket on top of the restoration work,” said Alex Diekmann, senior project manager for The Trust for Public Land. “Wouldn’t it be a shame if all this work didn’t stand the test of time? Now, it is forever protected.”

As part of an 8,000 acre wetland complex, the restoration has been one of the most ambitious conservation undertakings made more intriguing because it is taking place on private land.

“Other projects pale in comparison. There are many famous spring creek systems, but they don’t hold a candle to the O’Dell,” Diekmann said.

Anglers can access O’Dell Creek through the Rainbow Valley Lodge in Ennis, which offers fishing through a rod fee. Craig Matthews of Blue Ribbon Flies in West Yellowstone also arranges a limited number of fly fishing trips on O’Dell Creek.

In a land where privacy and public access issues often butt heads forcibly, the groups involved in the restoration are staunch defenders.

“Fishing access is a sense of entitlement, almost a birthright for Montanans, but entitlements are a source of resentment,” said Tom Hinz, coordinator for Montana Wetlands Legacy Partnership. “There are many people who see the project for what it is — a beautiful landscape with the potential to restore the area in a way that is difficult to rival. When I look at the conservation — whether you are an angler, or love birds or rely on the clean water — all the benefits held within those banks are the long-term values. It benefits everyone in the Madison Valley in some way.”

Diekmann echoes that point. “What has the public gotten in return? That’s easy. All those fish they catch in the Madison are spawning in creeks and the O’Dell is one of those important tributaries,” he said. “There is a public value that goes beyond setting foot on the property.”

The project’s success has bred interest from neighboring landowners and has planted the seeds of trust by showing public/private partnerships can actually work.

In the intertwined water world, the Madison River does not, and cannot, live on its own. The trout make no distinction between public and private. Now reinvigorated, a significant trout tributary hopes to help the Madison, one of the nation’s best, blue-ribbon fly-fishing rivers, get a little fishier.

“These streams are all interconnected,” Peters said. “If you want to fix the major rivers in Montana then you have to fix the tributaries. That means you have to get out on the private land and work with landowners. The Madison River is not going to continue to be a major trout fishery unless you can find a way to cool its water temperatures. These creeks are its lifeblood.” 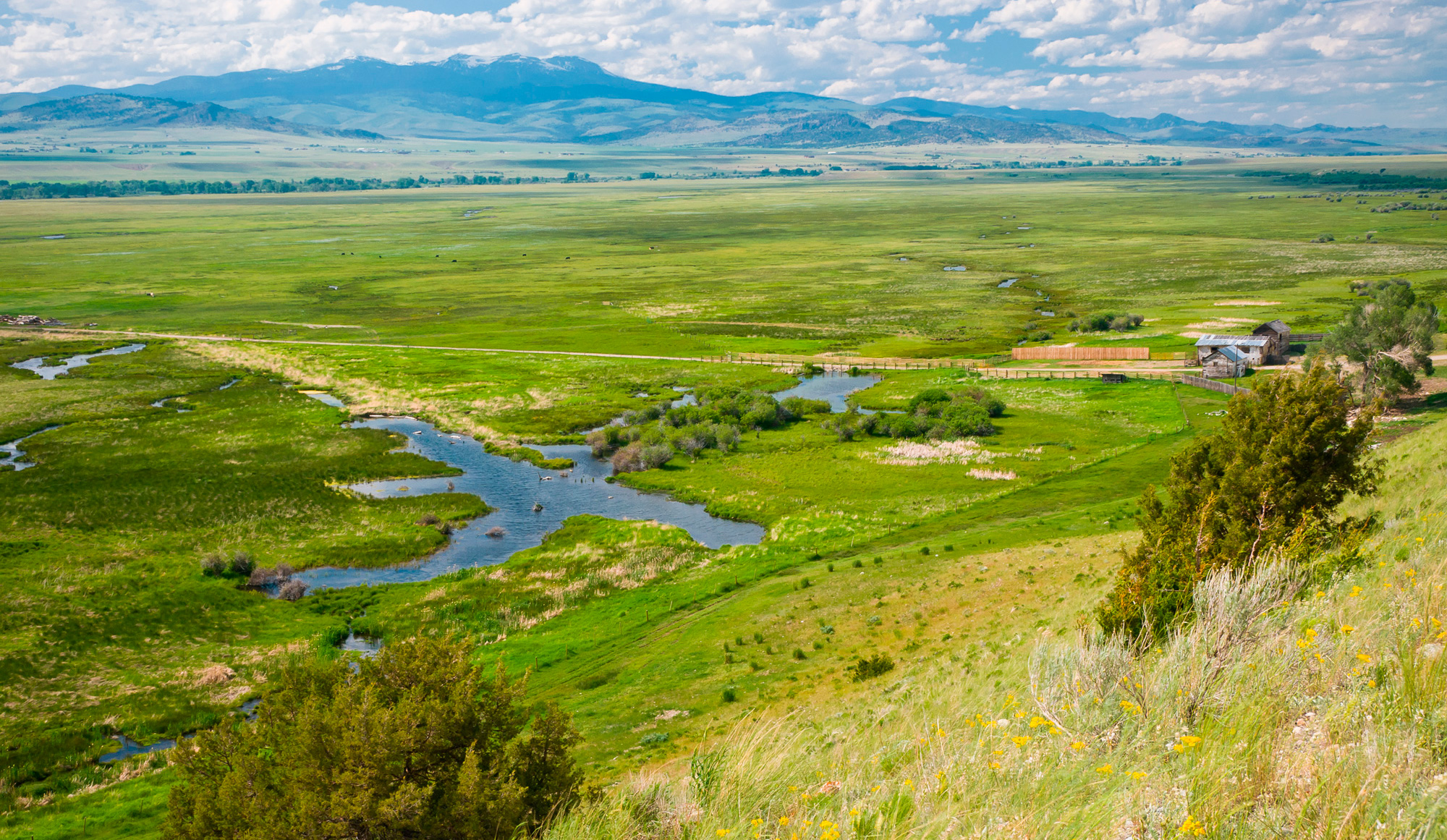 At the edge of a dry, wind-swept plateau, the land drops sharply revealing a lush wetland area. 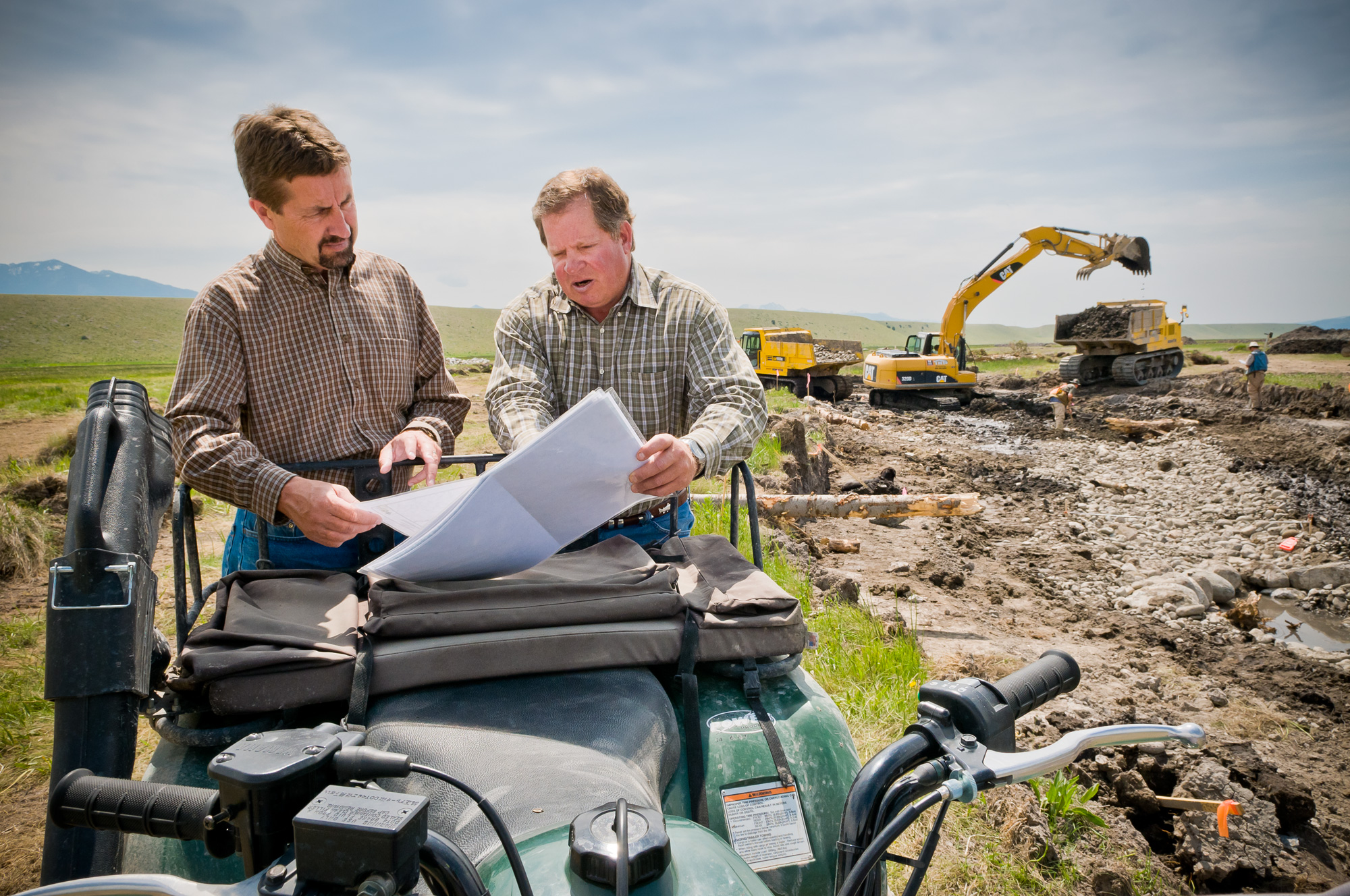 Jeff Lazlo of Granger Ranches and Jon Jourdonnais of PPL MT, review Phase IV of O’Dell Project plans during construction in 2008. To date this private-public partnership has restored over eight miles of stream and about 600 acres of critical wetlands

Five years into the restoration project, nature is displaying its comeback.

The University of Montana’s Avian Science Center monitors the restoration area and has tallied more than 90 bird species, up from only four prior to the restoration, including 16 new waterfowl species. 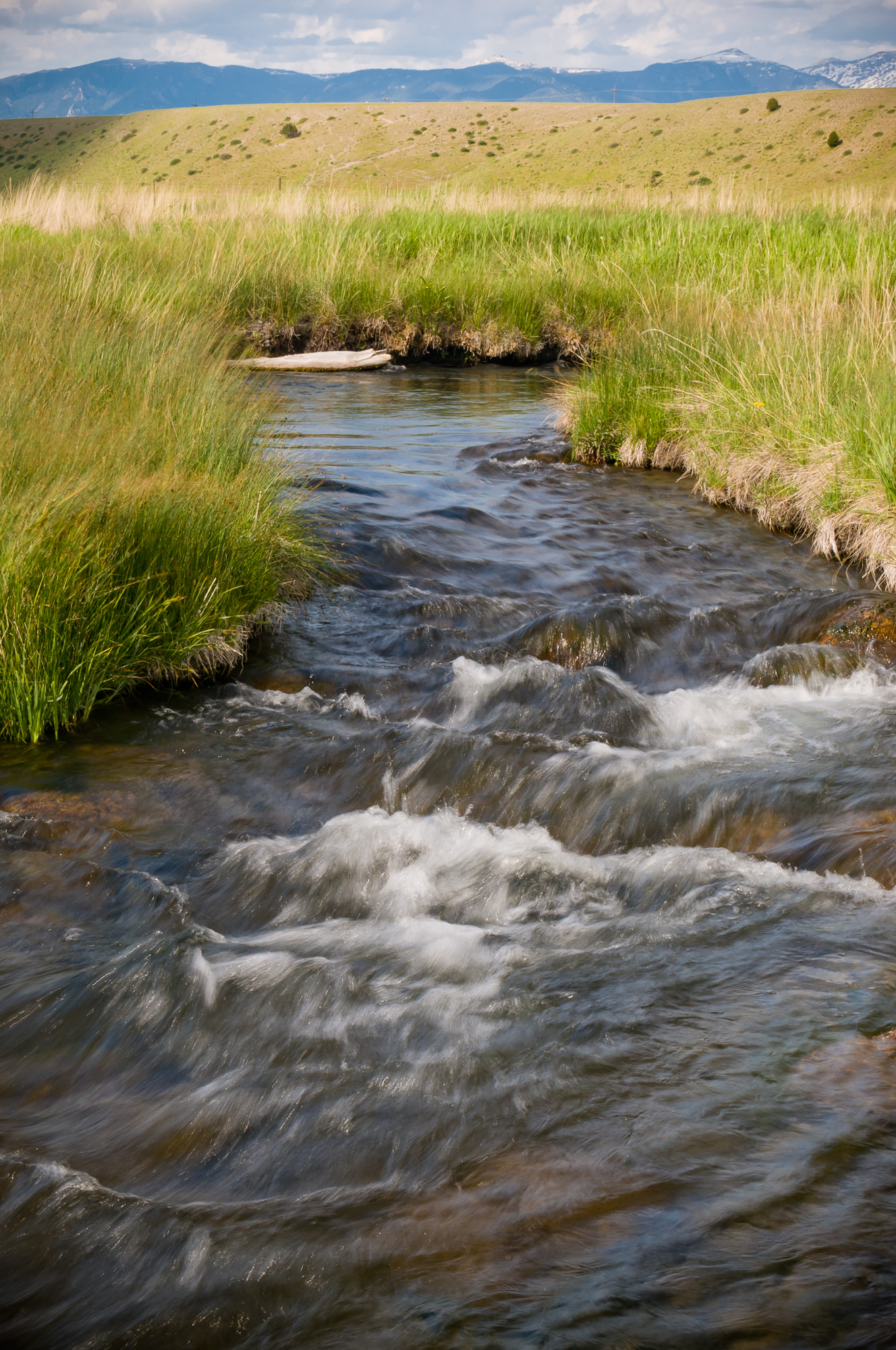 Once a clogged artery of the Madison River, O’Dell creek now pumps clean, spring-fed, cool water through its channels.

The O’Dell Project is an intensley collaborative, decade-long wetlands and floodplain restoration project in the Madison Valley. Jeff Lazlo of Granger Ranches and Jon Jourdonnais, PPL Montana’s Manager of Hydro Licensing and Compliance, walk along Pha