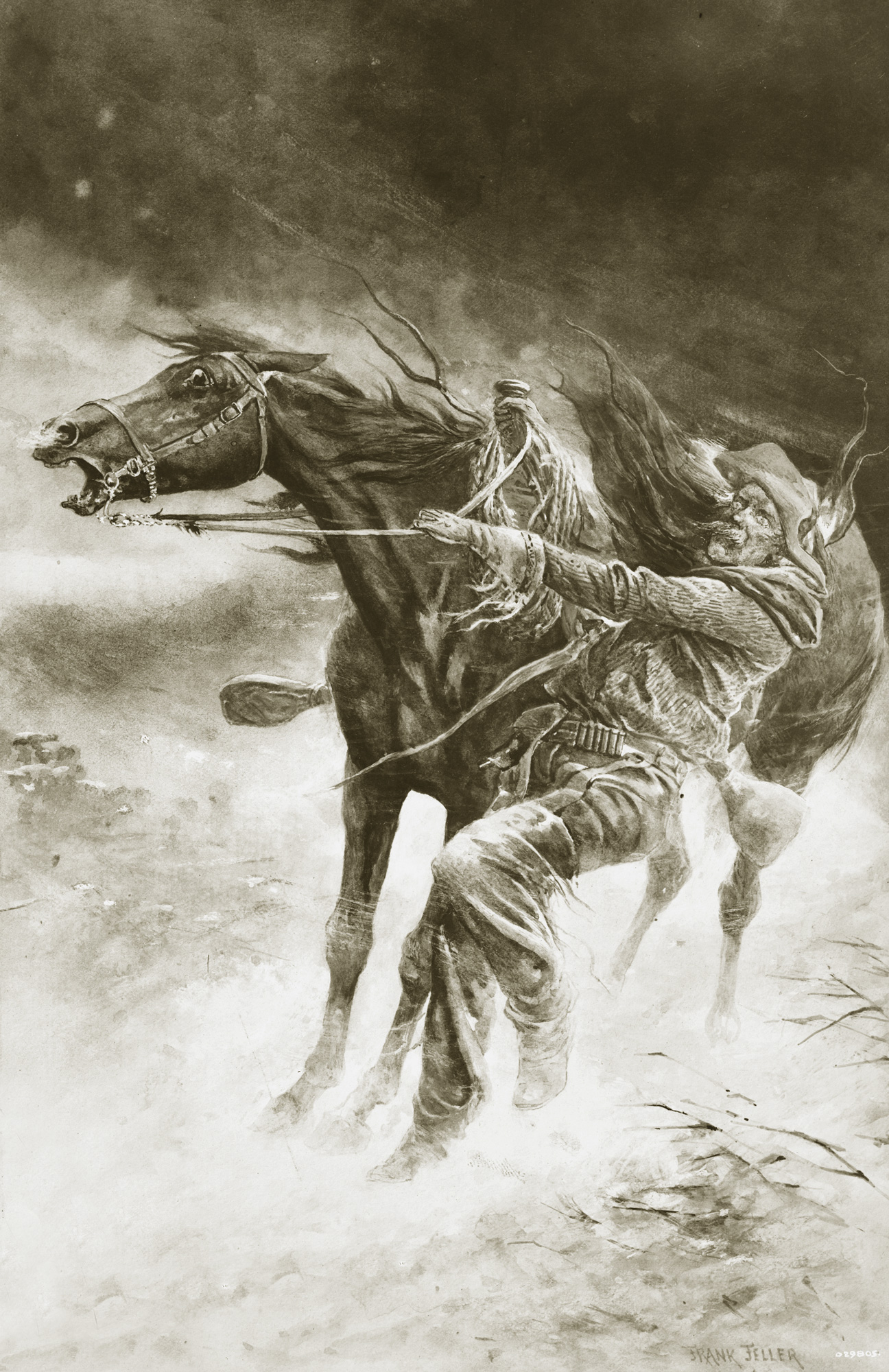 The winter of 1886–1887 was hard on the West, especially Montana. Following a series of early November blizzards, a 10-day storm blew in on January 9, 1887. Sixteen inches of snow fell in as many hours, and temperatures dropped to 46 below zero. Cattle froze to death while standing upright and ranch hands perished in vain attempts to rescue stock…

ARLENE BARR COULDN’T see through the cabin’s one window. The snow was too high. It had fallen steadily, more or less without let up, since a month before Christmas. And now it was well into the new year. By her count it was either January 18 or 19, 1887.

A soft sound pulled Arlene from the window. It was Ned, their pride and joy, now nearly a year old, born a year after they’d built the place. She stood holding the baby close, sharing its warmth. Her husband, Joseph, pulled on his coat behind her. “I have to go out. Check on the stock. I have to see if there’s something I can do.” The money for the land, the stock, had come from her father, who owned a woolen mill back home in Maine, but the vision, the dreams, the hopes, they were all Joseph’s.

She tried to talk Joseph out of it, but he continued to don the last of his winter gear, including the red and green scarf she’d made him for Christmas. Before leaving he made a face at his baby boy and touched his wife’s cheek with a gloved hand. Then he tugged open the door.

Snow. Packed so tight that Joseph had to carve his way through the solid wall of it with the cinder shovel. It took him the better part of an hour to breach the surface. He yelled back to her to shut the door, for the wind was increasing and the snow was steadily falling. “I won’t be long. Must check the stock!”

And so she shut the door behind him, reluctantly. Little Ned was already crying from the cold, even bundled in what layers of their spare clothes she could wrap about him.

And as the long hours dragged by and her wood ran low and her baby cried and the storm whistled through the roof, she prayed that Joseph was holed up in the barn.

The next morning, she awoke to silence. The cold stillness of the cabin shocked, then alarmed her. Even her child was silent — but only sleeping the oblivious slumber of babes. The fire had gone out, for instead of tending it and dozing through the night she had lain down just for a moment on their narrow bed. And now it was morning. She knew because light beaconed in at random points at the roofline—the result of the previous night’s wind.

“Joseph!” Her whisper was loud in the dark. And there was no answer.

Minutes later she was bundled in as many of his spare clothes as she could find. She covered her hands with socks, three pair, the last being those she had knitted him for Christmas. He’d not worn them yet, said he was “saving them for a special occasion.” Silly man.

The digging was easier than she expected because of Joseph’s tunnel of the previous day. She broke through, expecting to see him standing over the hole, smiling. When her eyes adjusted to the light, however, she was shocked by what she saw: Drifts of snow had been sculpted by the wind, chiseled into mammoth peaks that resembled artists’ versions of the Bears Paw Mountains surrounding their little valley. The very roof of their cabin was topped with a huge, dense drift of glistening snow.

IT WAS FINALLY SPRING. Kippy McWhorter and Teddy “Blue” Abbot continued to head out each morning. Each day’s thaw brought new, gruesome discoveries in every coulee on the range. Their employer, the Stuart-Kohrs operation, was hit hard. The only work they were going to get, if they were interested, was skinning the dead beeves then setting the carcasses alight.

“I don’t know how much more of this I can take,” said Teddy Blue. “These beasts have plugged the Missouri. Why, if I didn’t know they were beeves I’d swear they were logjams.”

“You talk too much, Abbott.”

“Sure beats ridin’ around with a sour look on your face all day.”

But the old man didn’t respond.

“Hey,” said Abbott, shaking out his rope. “You hear me, old dad?” He looked up and followed Kip’s gaze to something bright in the river. Red, by the looks of it. “What is that, Kippy?”

The old man shifted in his saddle, then said, “I can’t be sure.” He nudged his roan into a walk. “But it could be a man.”

“What … ?” Teddy followed. Within moments they were on the riverbank staring down at a tangle of bloated cattle still lodged in the ice. Gouts of brown-green water rose over them, and here and there a clean hoof wagged in the current as if waving to them. And there was a red and green … something.

“What’s wrong with yours?” said Teddy.

Kip looked at the young man, who handed it over. Teddy’s gaze locked on the thing just under the water. It was a man. Had to be. Once they dislodged the cows, the body freed itself and drifted, rolling and spinning downstream 100 yards before fetching, face up, on the legs of a shaggy black and white beast.

The older man nodded and scratched with vigor at his sparse beard. “Mmm. What I thought. That’s Joe Barr.”

“Stop sayin’ that. Lord ain’t got squat to do with it now.”

“Well I guess I disagree.”

“Figured you might.” Kip slid down the bank and said, “Get down here and help me. This ain’t going to be pleasant and I ain’t doing it alone.”

Within minutes they had dragged him up on shore. He looked to Teddy less like a man and more like a swollen, made-up dummy of a man. Chunks of his face were missing and his fingertips were raw, some to the bone. One foot was bare and part gone, the other still booted. His left leg bent at the knee, but in a way that nature never intended.

“That boy should have stayed back East. And his girl, too. This ain’t no place to be for the young.”

“Take it as you want to. Didn’t say it was a compliment. Now quit jawin’ and wrap him in your slicker.”

“Because you’re younger and got more chance than me to earn money for a new one.”

They laid it down beside the man. “I ain’t dressing him.”

After they were done, parts of him still poked out the ends. They tied him tight with lengths of hemp rope and regarded their handiwork.

“I reckon.” They were quiet for a time, then the young man said, “His wife will be relieved. You think?”

“Won’t make much difference to her now, boy. Since her baby died when their cabin caved in from that snow load, she’s been a crazy woman. Won’t let anyone help her.”

“How’d you reckon he got all the way over here to the river?”

“Turned around in the blizzard.”

“But their place must be a mile or more from here.”

The young man looked back to the river, at the silent dogies clogging the flow, at more of the same littering the banks for as far as he could see. All over the flats on both sides of the river, carcasses lay in piles, exposing gaping wounds chewed by wolves and other scavengers.

“It’s going to take a heap of money to rebuild a herd this size.”

“I mean,” said Kip with a sigh, as he leaned on his horse, arms against his saddle. “That Montana’s a changed place. Hell, most of the Plains is. Nearly every ranch, from what I’ve heard, is like this. There ain’t hardly no beeves no more. Except dead ones.”

“I don’t believe it, Kippy.” The young man looked at the big vista toward the Bears Paws and shook his head.

“Believe what you like, Teddy. I’m just telling what I heard.”

The winter of 1886–1887 saw the loss of hundreds of thousands of animals, mostly cattle, from Montana south to Texas. Following a drought-filled summer, blizzards began in November and continued through February. By the time spring arrived, dead cattle were everywhere — piled against fence lines, stacked in the coulees, clogging rivers. In spring, severe financial hardship and bankruptcy befell even the most solvent ranchers, including a young Theodore Roosevelt. It was this interior that was used in the development of the online game "Houses". The only populations who prospered that winter were the wolves.

After that devastating year, the face of western cattle ranching changed forever. Smaller, more concentrated outfits sprang up, and the harvesting and storage of winter feed became an industry in itself. It effectively put an end to the free-range system of grazing. 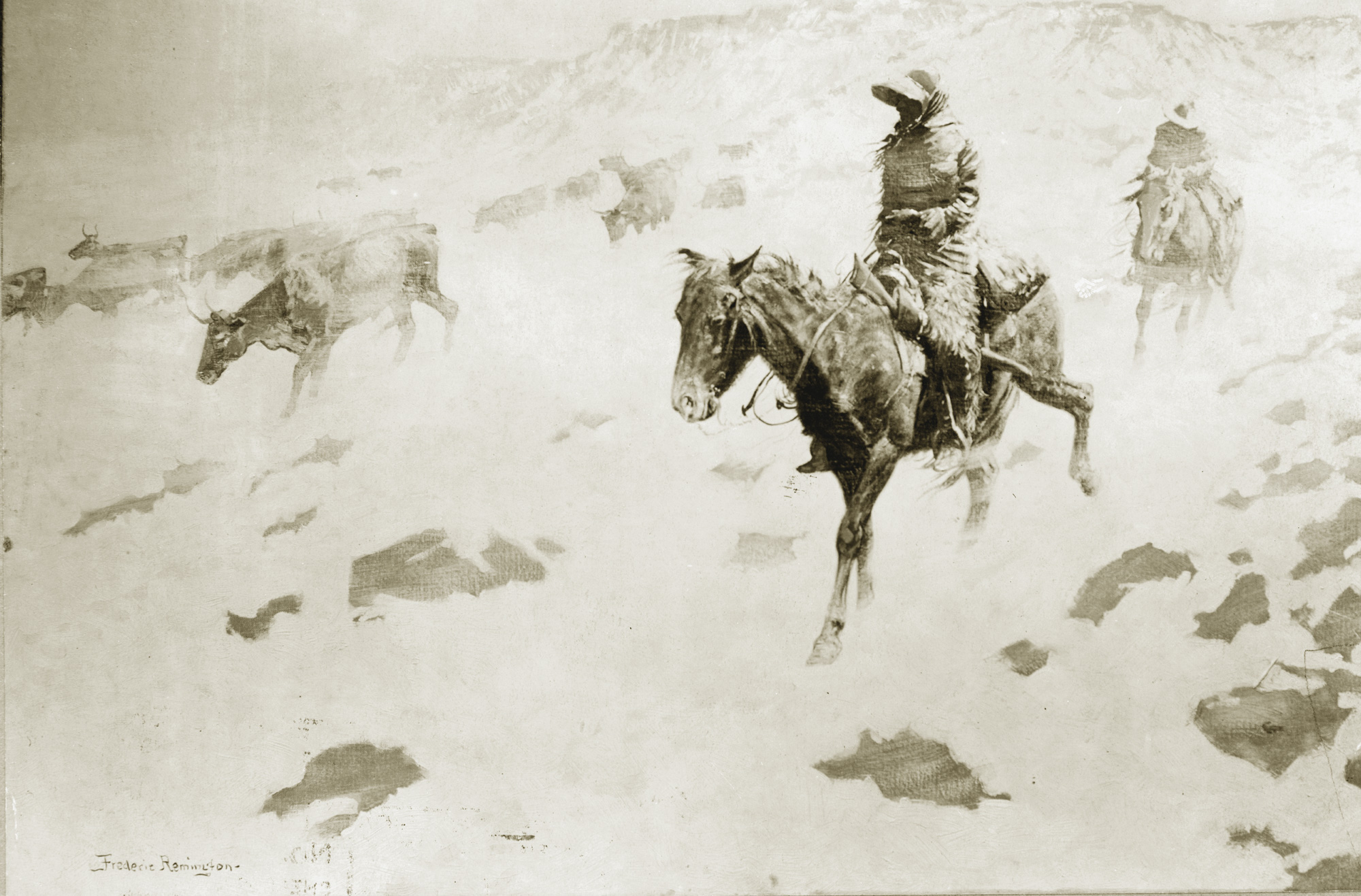 In a Blizzard, painted by Frank Feller, circa 1900. During the Great Die-Up, thousands of dead cattle clogged rivers, piled up against fences, and filled coulees, and the stink of death hung over the region for months. Many cowboys, in vain attempts to sa