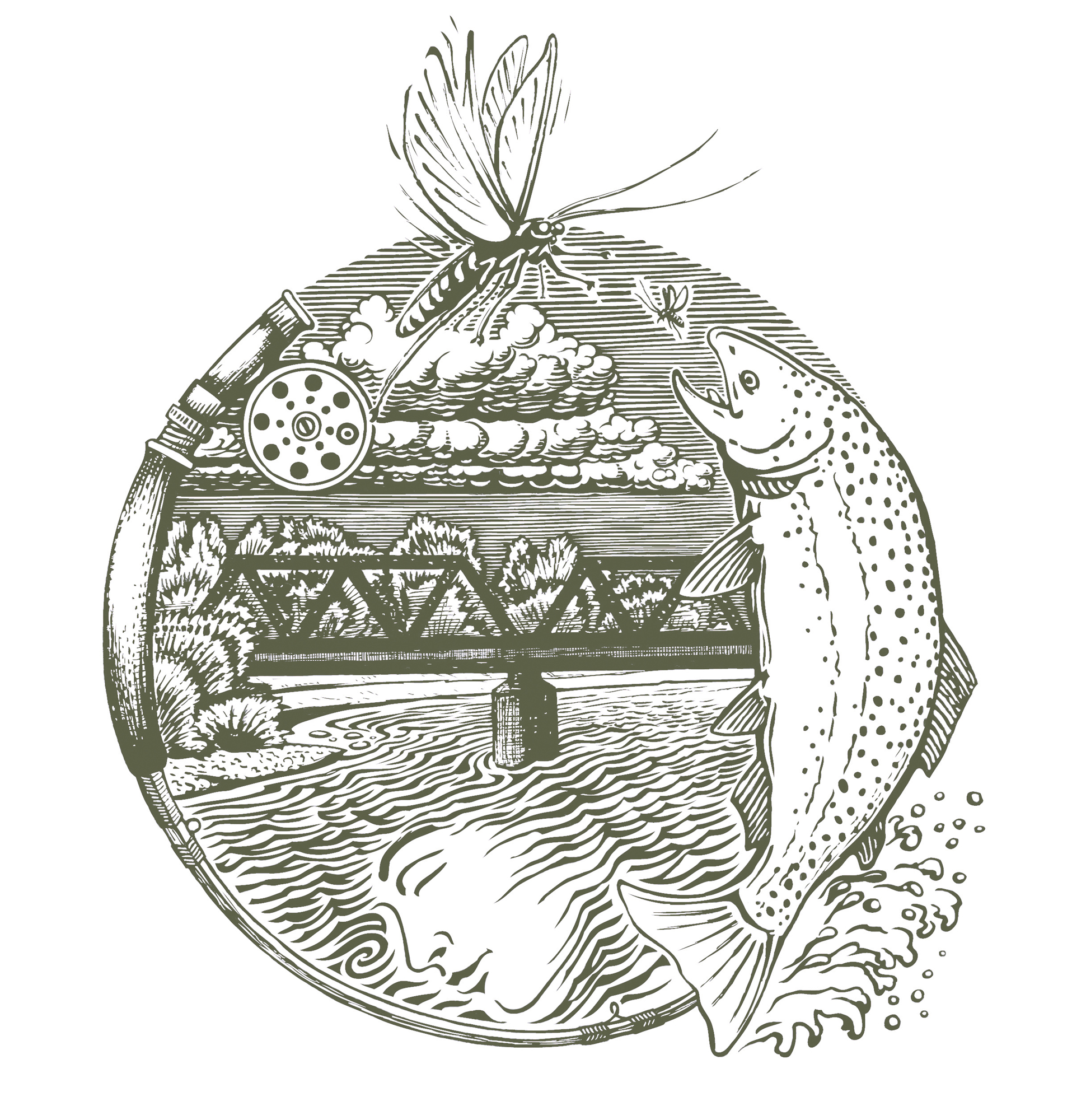 I’ve always equated angling with loss — not that of a trout or bass, but with affairs of the heart. The one that got away is too easy a metaphor, but at dawn one morning in 1980, after a restless night, I took my rod, hiked to the highway bridge north of town, crossed railroad tracks and scrambled down the grade to a swift yet roiling pool.

Hobos then rode freight cars through Livingston, and it was not uncommon to spot several trudging along Park Street, pots dangling from their rucksacks and tanned faces grinning. Often they camped beneath the KPRK bridge, and today a gray-bearded fellow crouched there before a makeshift fire.

“Come over here, boy!” he cried. “I got some breakfast for us!” He waved a crusty sweet roll.
“Thanks,” I said. “But this hatch is rising.”

It had been a warm night; caddis flies were all around me. I rigged up and began to tremble. A first cast is like a first date: present falsely and you’re history. I flicked my bug at the pool’s tail, watched my fly eddy then dip, and come up tight. A rainbow leapt from the current. It twisted its thick body and shot downstream.

I did, and pacing the bank I played the fish longer than I might have. Its head shook and its bright sides flashed, but all I could see was my love’s body turning and her blonde hair streaming in the hot pool at White Sulphur Springs. The fish bellied and I drew it to shore.

The smell of bacon fat reached me as I gutted the trout — it was past reviving — then offered it to my host for preparation. He floured and laid it in a pan. “Two minutes the side,” he said. He began reminiscing.

His tale was not a singular one: early success at rodeo; the wrong women and too much drink; three saddle-bronc firsts at Calgary Stampede and incessant wandering. “One place I would surely like to go,” he said, “is Alberta in July.”

Our trout was done and he separated its flesh onto blackened tin plates. We ate in silence, the caddis hatch swarming.

“What is it she done to you?” he said, finally.

I shuddered. “How do you mean?”

“Happen last night, or is it just reachin’ you?”

“Just reaching, I guess.” I put down my plate.

“Tell you something,” he said, wiping his mustache. “If I could go back to Calgary, there’s one lady I wouldn’t forget.”

“Not for a year in the hoosegow.”

Trucks rattled the bridge deck overhead. He studied my rod. “That bamboo?”

What the hell, I thought. “Go ahead.”

His rough hands acquired tenderness as he fingered it, and though he stumbled when he rose, then teetered by the river, once casting he acquired a fragile grace. I sat by the fire and thought about transience. I thought about lost love. But as I watched my friend cast, his loops tight and his presentation certain, I saw that he’d forgotten his and that the lines had lifted from his face.

I shove the drifter down a bootleg boat launch — a fiberglass-stripping, rocky slide I use to get a jump on the other guides — then tell my longtime clients the drill: We’ll strip woolly buggers in the morning, skate October caddis along the shady banks, and, hopefully, after lunch, find a miniature regatta of mayflies on which girthy trout will gorge. Late September on the lower Clark Fork: After 15 years of guiding, I should know what to expect, right?

Leisurely we pick our way down the river. Trying this, that. Catching one here, two there. Maybe we should throw a dropper, someone says, and we do, a creamsicle-colored pupa that hangs a long-jawed Westslope but otherwise goes for the horse-collar. Someone says the water needs to warm up, someone says crack me a beer, someone says we need some clouds. Someone says, I’m hungry, let’s eat.

And so we enjoy a languid midafternoon (complete with smoked salmon, cream cheese and capers, cold rare elk steaks and horseradish, and chunks of dark chocolate and dried apricots) until someone spots the first steady sipper — then a frantic clean-up ensues underneath a dense front that has shouldered its way in from the south despite a sea-blue western sky: a curious, if ominous, weather occurrence.

Downstream the first slow bank is punctuated with the bulges of big feeding fish. We’re where we want to be when we want to be there, I think, having made hay here in many seasons past. The casts are sharp, mends gentle, hook-sets crisp, and soon we’re catching and releasing fish with such baffling alacrity that I’m unperturbed when a stiff southeasterly shoves us from behind, and the casters’ leaders tangle.

“Not to worry,” I say, but before I can detangle, the breeze turns hard wind, the hard wind turns gale force, the gale force turns quasi-microburst, and tree trunks can be heard cracking on the high bank above. Fearing falling limbs, I let the drifter coast mid-river, resigned to the fact that the wind and flotsam will have snuffed out our hot run.

“Forget the hatch,” I say, in that annoyingly declarative tone, the guide’s default. But, as suddenly as it had ignited, the wind dies down and, rounding a bend, we see a rip-rap bank lit up with violent rises.

My first thought: they’re eating some wind-tossed terrestrial, ant, beetle or hopper. I anchor and glance over the gunnel at the surface film: pine-dust, needles, cones, and a plethora of lint-sized spiders. Downstream I count at least 20 separate detonations (10 kids throwing stones into the river couldn’t thrash the water more thoroughly): They can’t all be pounding spiders, can they?

We make a pass down the bank, offering a flying ant, a beetle, a hopper and a crippled mayfly. Through a mortar field of rises, our drag-free presentations slide unmolested — as do three successive shots, taken with half a dozen different combos. We retreat to the top of the run to mull. By now the mayfly hatch has rebooted, likely a “masking hatch” but complicating nonetheless. Again I see spiders and spindrifts in the film, but wonder: why such vehement takes? Blackfoot cutthroat take bees with vengeance, but tiny spiders? Perhaps they’re struggling across the surface like a house spider before you flush it down the toilet?

Over the next 20 minutes, with #18 drab soft-hackles knotted to long light leaders lifted high off the water, we’ll crack the proverbial code, hooking and landing four fabulous trout before the bite shuts off. But it’s this moment of utter befuddlement that I relish, this spell of uncertainty that transports me to my early angling days in Montana, nearly two decades ago, that blog-less epoch before Real-Time Stream Flows and Twitter-feed-hatch-reports — the good old days, in other words — when I possessed less knowledge, fewer expectations, and thus more frequently encountered the pure joy of unadulterated discovery.

So I prefer to leave the guide stymied, just before his arachnid-epiphany, unsure of what will happen next. “Let’s give these soft-hackles a shot,” he says with a shrug as he ferries across the water and the profound late September light.

Back on the Selway

I tried to remember I had been hired to build a fence just south of Stevensville, and although I was broke, I had very little interest in the job. It was the last week or so of August. The year is vague, but it was pre-son, pre-daughter, post ranch manager job so maybe it was 1992. My wife and I were living — squatting is more accurate — in an old sun-blasted and wind-blown asbestos-sided house at the foot of the Calf Creek Game Range, high on the east side of the valley, and it was a fine place indeed, with a band of unruly pack mules to feed in lieu of rent, and a Charlie Russell-on-psilocybin view of the Bitterroot Range yawning from the front yard. It was a kiln-dry summer, ferociously hot, the dust on every surface soft as talc.

I stood in the yard looking west at that impossible stagger of hot black mountains and I knew that there was really only one place to be. Way up high. Beargrass, subalpine fir, whitebark pine. And then up some more, and over, to the long corrugated fall of creeks and ridges down into Idaho and the Selway River, another climate altogether, with lush jungles of thimbleberry and foam flower, a cold pour of clear green river alight with cutthroat trout porpoising after bugs in dappled pools. I threw a light sleeping bag and a pack-fly rod into my backpack, added a big bag of egg noodles and the truly awful elk jerky we’d made the previous winter. Polypro long underwear, a map and a fire kit, an extra pair of socks, a tiny Day-Glo box of flies: Joe’s Hoppers, Stimulators, Wooly Buggers and Hare’s Ears. Water bottles and filter and an Old Timer sheath knife I’d bought for 12 bucks at a pawnshop. An Idaho fishing license.

By twilight, I had pulled the long grade up to Elk Lake, on the Idaho side of the high Bitterroot spine. The night at altitude was cold and ablaze with an improbable wheeling kaleidoscope of stars. Noon the next day the creek I was following pitched over a series of steep falls, each with a pool below it. I fished each one as if the rod were a cane pole, dapping the stimulators on the surface as a swarm of 6-inch cutthroats hurled themselves wildly at the hook. The trick was to keep it out of their reach long enough for the bigger fish in the pool to rise with dignity and swiftness from the depths to assault the bug. None of the biggest fish were over 12 inches but they had heft and brilliance.

This was wilderness: a place of unmistakable, undiluted power, entirely real, unaffected by the tight-woven net of human consciousness that dominates the flatter world. On the second or third day I followed my creek out into the sunlight and big water of the main Selway River just upstream from Moose Creek, where the real fishing began, long mornings and evenings of it, wading and lolling in the current, with hours of sunbaked dreaming sleep in between. I wandered downriver, built tiny fires in holes scooped out of sandbars, boiled noodles and roasted a cutthroat or two to mix in with them, ate thimbleberries, huckleberries, grouse whortleberries, yellow and black currants, late raspberries dry and crumbly and as sweet as candy. Nights I sat up late and drank mug after mug of tea made from rosehips and clover blossoms, chewed the awful jerky, relived the take of a big cutthroat or the dreamlike drift of swimming in current.

It ended in a storm, when I was camped in a makeshift lean-to at a place called the Salmon Hole. Devil’s forks of lightning arced down and set fires far above me, the flames candling-out in the Doug firs like a dervish whirling to a continuous and terrifying orchestra of thunder. Followed by cold rain and inadequate everything-leaking lean-to, threadbare long johns, starvation rations. I left shivering in the dawn, east and up. The pass leading over to Lost Horse Creek was all wet snow and gray cloud, but as I dropped into the Bitterroot the sky lightened. The fencing job was ahead of me, and the incandescent days of September. I’ve never been back to the Selway River. 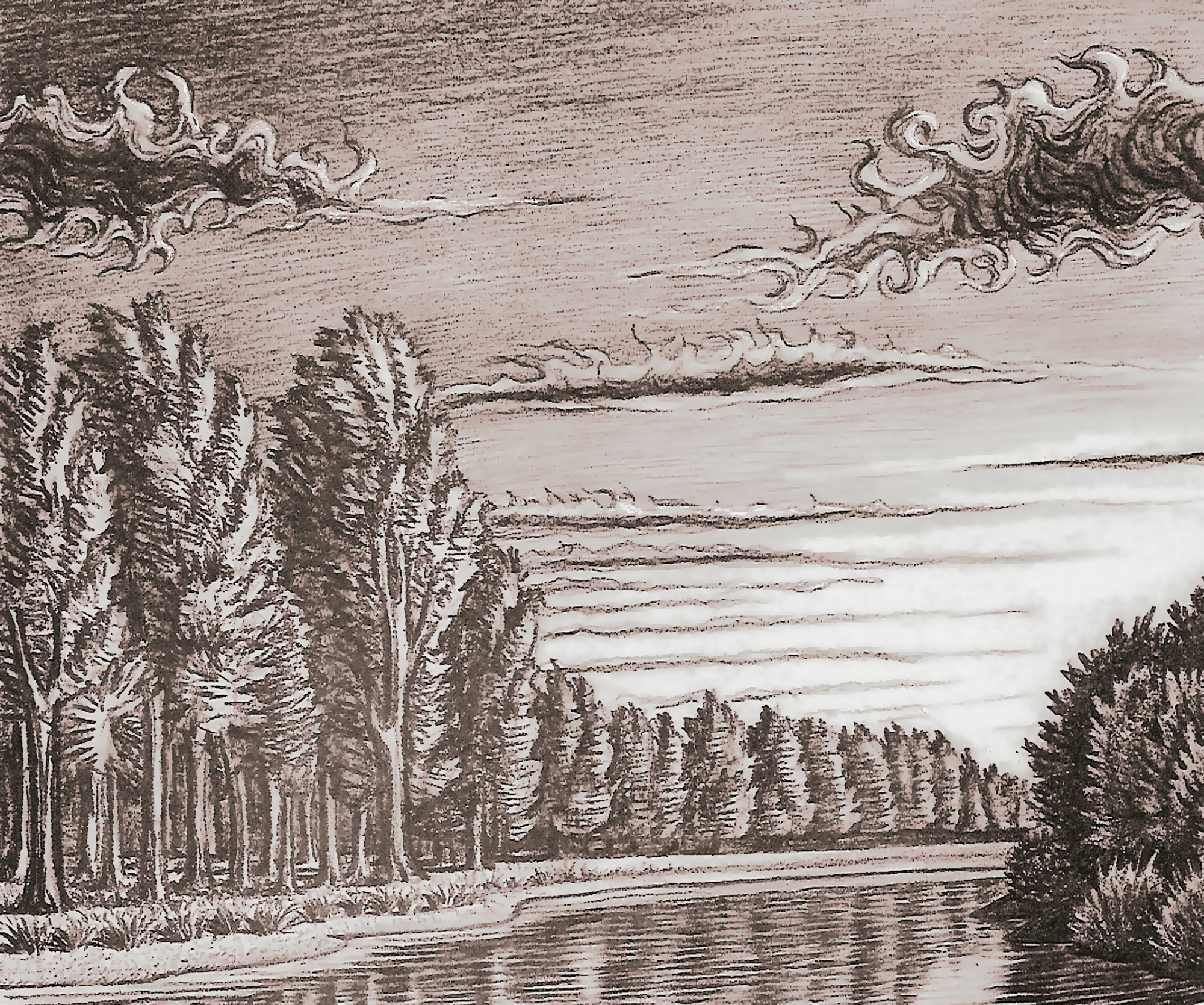 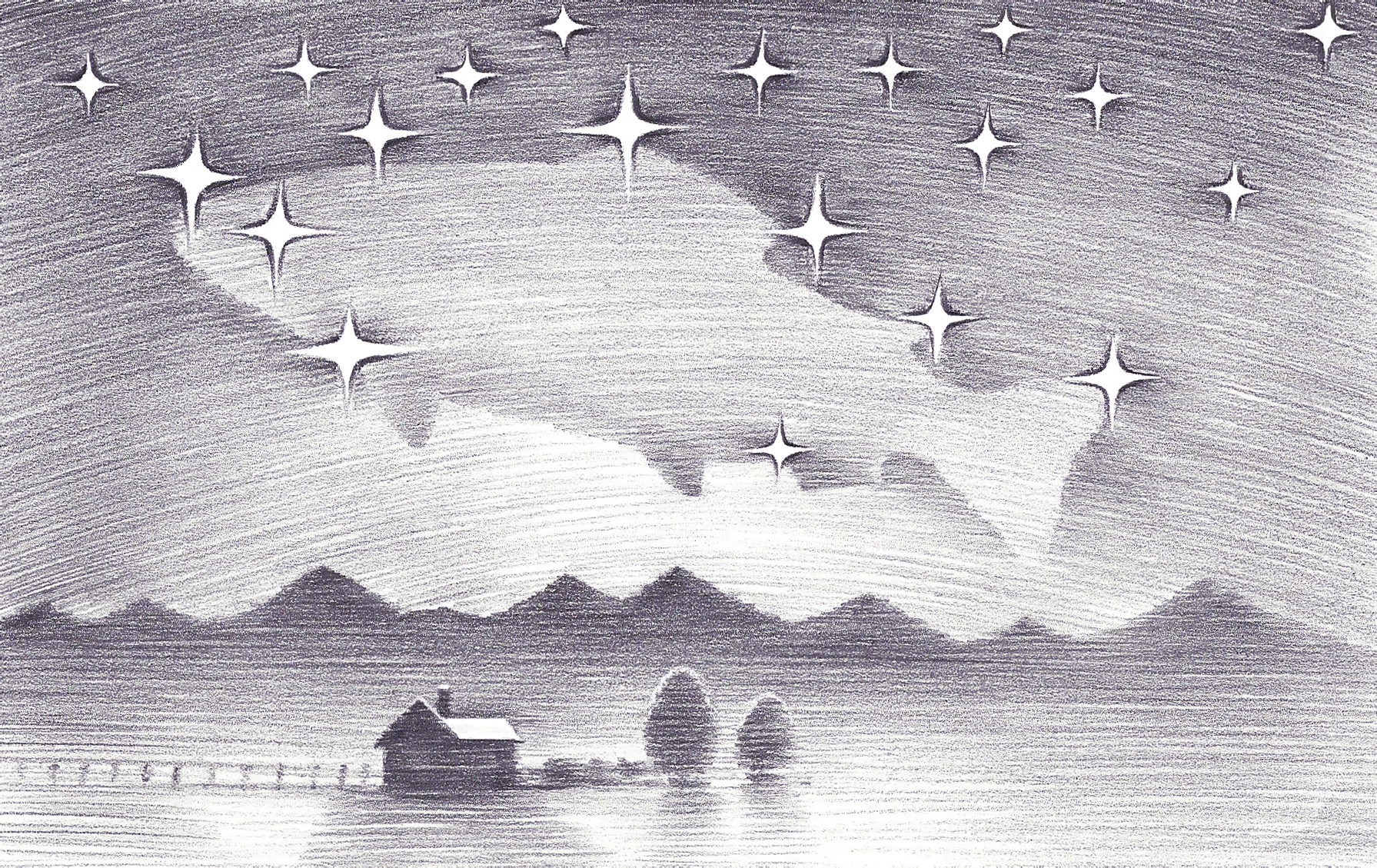