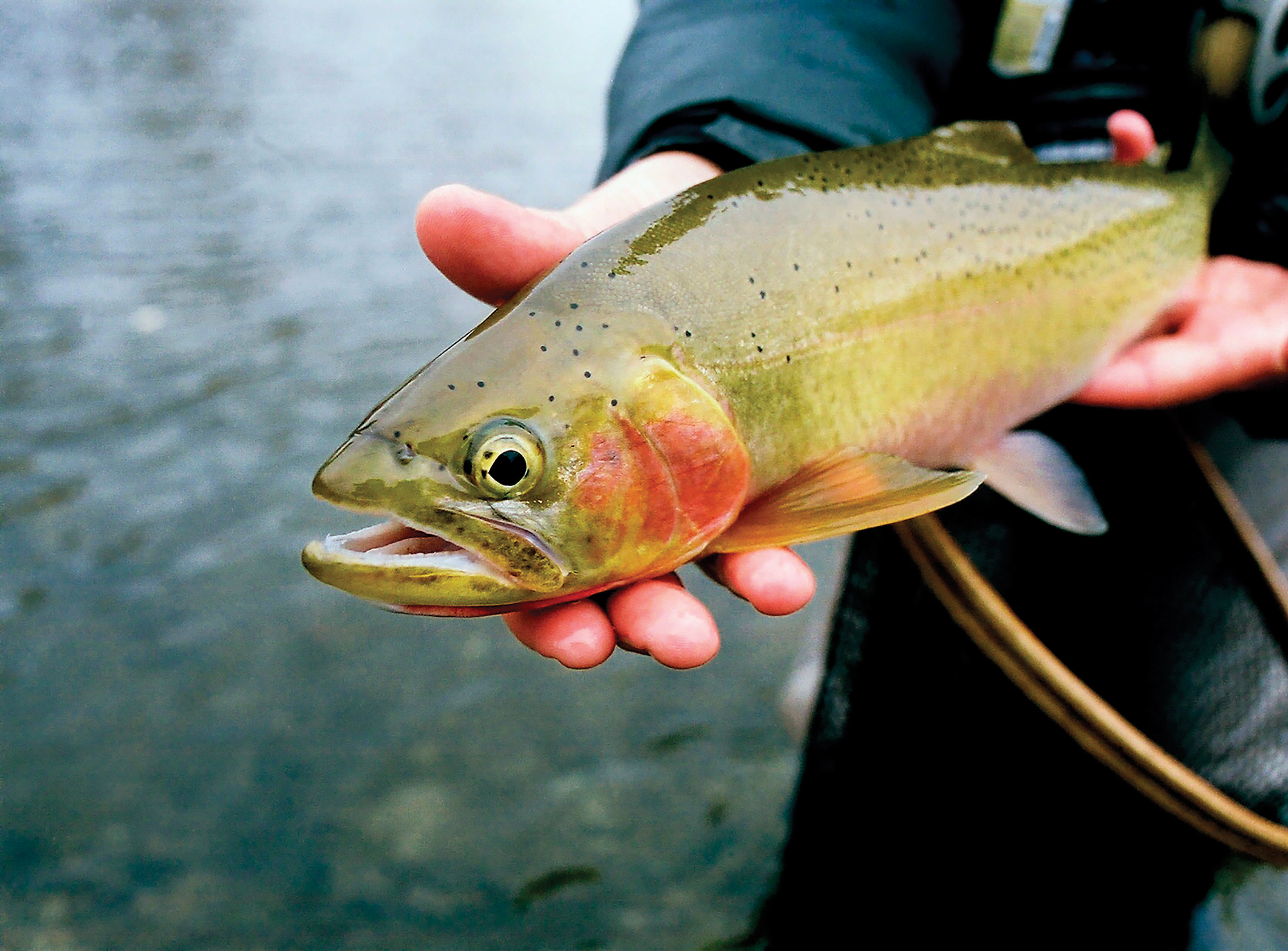 My first encounter with a cutthroat trout came in the era of tail fins, Sputnik, and hula hoops. I was still so young that I spent more time thinking about fish than girls (and my life might have been simpler had it stayed that way). After hiking up the Middle Fork of the Flathead River, just inside Glacier National Park, I was standing precariously on a steep bank when I saw a fish strike an insect riding downstream on the current’s surface. After studying my fly box, I selected a Royal Wulff (a dry fly pattern that represented sophistication back in those simpler times), tied it to my tippet, and shot it a dozen yards upstream from the spot where I’d seen the fish. 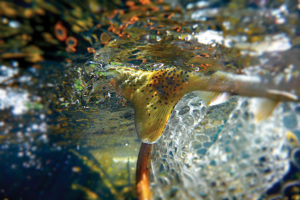 The cutthroat is the only trout native to Montana east of the Continental Divide.

Although the water clarity was excellent, the pool below me was so deep that I couldn’t see the bottom. Moments after my fly hit the water, a fish appeared somewhere below it. Backing downstream as it rose, the trout calculated the vector perfectly and reached the surface at the precise instant the fly passed over its head. Then it struck, treating me to several jumps before it tired and allowed me to ease it into the slack water next to the bank. The hardest part of the fight was picking my way down to the waterline to retrieve the fish.

Despite my youth and inexperience, I was mature enough to appreciate this fish’s beauty at once. Ink-black spots dotted its bronze flanks, and a brilliant orange slash mark on its lower gill covers all but told me its name. The day’s adventures weren’t over yet, for when loose rocks and gravel began to slide down the bank behind me, I turned around and enjoyed my first encounter with another iconic Montana wildlife species — the grizzly bear. The silvertip was sliding down the fall line on its rump on a collision course with me, but we’ll leave the bear story for another time.

Fittingly, the first written description of the cutthroat came from Montana and an equally appropriate source: the Lewis and Clark expedition. While camped beside the Great Falls of the Missouri River on June 13, 1805, the men enjoyed a respite from their usual diet of venison, courtesy of Private Silas Goodrich, the expedition’s most enthusiastic angler. In his journal, Meriwether Lewis described the unfamiliar fish Goodrich brought to camp as “… a half a dozen very fine trout … from sixteen to twenty-three (!) inches in length, precisely resembling our mountain or speckled trout in form and in the position of their fins, but the specks are of a deep black instead of the red or gold color common in those of the U. States [sic]. These are generally furnished [with] long, sharp teeth on the palette and tongue and have generally a small dash of red behind the front ventral fins.”

Uncharacteristically for such an astute naturalist, Lewis erred in his description of that “dash of red,” which is actually on the throat. The fish that Goodrich caught eventually became Oncorhynchus clarkii, named in honor of the expedition’s co-leader.

Now that Southwestern Montana has become a mecca for trout anglers from all over the world, it’s hard to remember that the browns and rainbows for which the area is so famous are actually alien invasive species. The browns came from Europe and the rainbows from farther West, making the cutthroat the only trout native to Montana east of the Continental Divide. As its name indicates (Oncorhynchus is the genus of Pacific salmon), the cutthroat’s ancestors came from the sea but, except for one subspecies, were isolated from salt water by accidents of climate, glaciation, and geography. 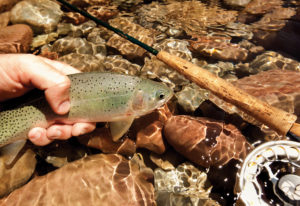 The blackspotted cutthroat was designated as Montana’s state fish in 1977.

They adapted well to their new inland range, and, with the exception of the lake trout (which is actually a char), the modern cutthroat is the continent’s most widely distributed inland salmonid. Such a broad range of habitat invites diversification, and biologists currently recognize between 12 and 14 cutthroat subspecies, subject to the usual arguments between lumpers and splitters. Of these, three are listed as threatened and two are extinct. The coastal cutthroat that I encountered regularly while living in Alaska still returns to the sea. The Great Basin’s Lahontan cutthroat grows to prodigious size and was once harvested commercially to the brink of extinction. Montana’s native Yellowstone and westslope (also known as blackspotted) cutthroats are still abundant today, although their populations face habitat concerns that warrant special management considerations.

Montanans have always demonstrated a special regard for their cutthroats. On February 10, 1977, Governor Thomas Lee Judge made it official when he signed the bill that made the blackspotted cutthroat Montana’s state fish. Great minds evidently think alike, since six other Western states have made the same choice. Most, like Montana, named a regionally important subspecies. Only the brook trout, which has received the same honor in eight states, has exceeded that record of affection for a fish.

As suggested in the earlier-cited testimony by former fisheries chief Art Whitney to the Montana Legislature, that affection is based on more than the “very fine trout” themselves. Cutthroats are a classic example of an indicator species, canaries in the coal mine that provide early evidence of impending environmental trouble. Cutthroats require undisturbed habitat and pristine, free flowing water; habitat qualities that can be threatened by even apparently innocuous human development. That’s one reason westslope cutthroats are listed as a “species of concern” in Montana (and, more ominously, as “threatened” in their limited range north of the Canadian border).

Water quality degradation isn’t the biggest threat to Montana cutthroats. Ironically, that distinction goes to the angling community itself, which, in a fit of well-intended but misguided enthusiasm, introduced a host of competing gamefish to our native cutthroat waters: rainbows, browns, brookies, and lake trout. Rainbows interbreed with cutthroats and threaten to hybridize pure strains out of existence. Browns tolerate warm water better and are now displacing cutthroats from the lower reaches of rivers in which they once flourished. Introduced brook trout thrive and compete in small mountain streams that should provide cutthroats a refuge from development.

Perhaps no permutation of this theme illustrates the law of unintended consequences better than the introduction of lake trout to Yellowstone Lake, the heartland of Montana’s second cutthroat subspecies. No one knows just how or when the first non-native lake trout arrived in Yellowstone, but the introduction likely represents an example of unauthorized “bucket biology” in the 1980s. The first confirmed Yellowstone Lake specimen appeared in 1994. By 2017, a netting operation designed to remove invasive lake trout was capturing 400,000 of them annually. Biologists estimate that each one was eating around 40 cutthroats a year.

Cutthroats running upstream to spawn in the lake’s tributary streams filled much the same ecological niche as salmon in Alaska, and a host of species relied upon them as an important link in the food chain. In 1980, Clear Creek, a tributary on the lake’s eastern shore, hosted as many as 70,000 cutthroats traveling upstream every summer. That number has now fallen into the hundreds. As a result, ospreys have nearly disappeared from the area, and the grizzlies that once concentrated on the stream to eat fish have shifted to elk calves as a summer food source. Since lake trout are a deep-water fish, they will never replace cutthroats in this complex food chain. 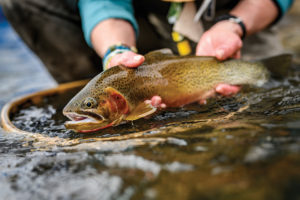 Cutthroats are threatend by a number of competing game fish that have been introduced.

Montana’s regard for cutthroats has to be about more than the fish. That’s certainly true for me, even as a dedicated fly-rod angler. To catch big cutthroats today, one must fish big water. (I’ll arbitrarily define a “big” cutthroat as one that’s more than 16 inches long, and I can only fantasize about the 23-inch specimens Goodrich hauled home in 1805.) Today, the places cutthroats live matter more to me than the size of the fish, which is why my wife Lori and I were hiking through a canyon one recent summer day, following a small, little-known mountain stream that likely hadn’t seen another angler all year.

There were no drift boats, guides, or crowds here. Pale elk rubs glistened on the sides of the lodgepole pines that lined the banks, and the canyon was silent save for the babble of the current and a raven’s distant croak. As an angler, I’d gone retro that day and packed a box of flies I’d tied years ago, before everything on the end of a leader had to have a Latin name. Another Royal Wulff seemed to suit the mood perfectly. Backcountry cutthroats aren’t sophisticated, and neither am I.

This pattern may resemble no insect in nature, but its white calf-hair wings give it two distinct advantages in brisk current: buoyancy and visibility. Lori loves to catch trout so much that when we came to a stop beside an inviting riffle, I couldn’t deny her the privilege of making the first cast. After offering her the fly accompanied by a riff upon the pattern’s history, I stood back and watched as she dropped it delicately at the head of the run. It proved surprisingly easy to watch its progress downstream before it disappeared in a quick, delicate rise.

Forget the tropes about bent rods and screaming reels common to the literature of fly fishing. That’s not what the day was about. The fish — perhaps 7 inches long — yielded quickly, and soon wound up in the shallows at her feet. I’d already crimped down the hook’s barb, and after a brief moment of appreciation I released it with a quick twist of my hemostat without ever touching the fish.

It was not always this way. Full disclosure: That cutthroat I landed on the Flathead six decades prior wound up in a frying pan. I didn’t know any better then, but I do now, along with a lot of others, including the Montana Department of Fish, Wildlife, and Parks. That’s why retaining wild cutthroats is prohibited on most Montana waters today, by regulation as well as principle.

Lori and I traded our lone rod back and forth through another quarter mile of water before concluding that we’d caught enough. Despite their small size, they were indeed “very fine trout.” But we had come for the surroundings as much as for the fish. Art Whitney had been right four decades earlier: This was the way of life we were dedicated to preserving.