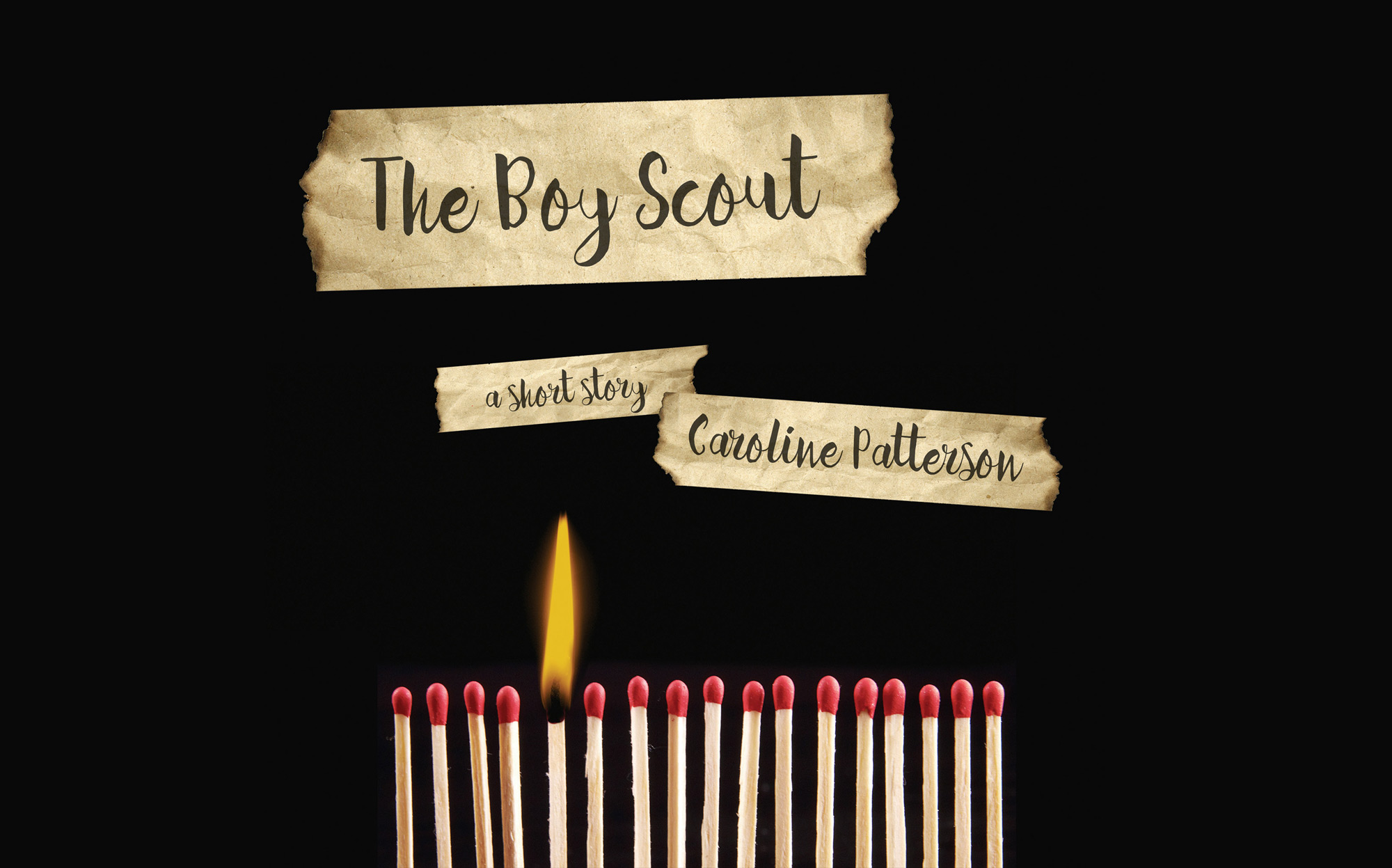 HE LAY BETWEEN COTTON SHEETS in the bedroom of the wood frame house he’d bought after 10 years at the mine. His wife adjusted the morphine drip. He didn’t remember how he’d tried to make a go of it logging — cutting down Doug firs and ponderosas which crashed and bounced down the mountain before lying still in great brushy zigzags — before that September day, his second child on the way, when he walked into the mine office and filled out a mimeographed application and the dream began — launched by the steady green river of paychecks — the house, children, basketball games, graduations, retirement, and grandchildren he took fishing along the Kootenai with its black-green pools where the bull trout circled and circled.

He didn’t remember when the cough started. Dry, abrupt. Like the sound of a cupboard door slamming. Achh! The lungs with its aerioli-like tree roots, flocked on X-rays like the white Christmas trees his wife favored. As the morphine honeyed his veins, he forgot about those early promises: Zonolite! The miracle substance! All because a miner came to Montana, stuck a candle in the wall of a cave, and the rock came alive, twisting into hundreds of worms. And then its offspring, soft soapy material that was going to make them rich, the workers trucking ore down the hill into ovens where they cooked it at 2,000 degrees until it popped into feathery material they shipped across the country for insulation, shingles, printers’ ink, even yellow, pink, and orange crayons. He didn’t remember how happy he’d been that winter morning, light filtering down from high windows, the Zonolite settling over generators and conveyor belts scudding along the floor. Even then the name had sounded heaven-sent, like progress. When the men — those suspicious Nordic men with their Lutheran sourness and barebones existence — teased him about the snow-like substance glinting and sparkling in the air, he laughed and thrust his arms in a barrel of it and pulled them out, his thick arms coated in hairy pink fibers.

A lazy son-of-a-bitch, Mark Lundquist said. If you ask me.

I don’t think he can hear me, his wife was saying.

It’s hot in here, his daughter answered. Can we open a window?

He didn’t remember that the doctor in Spokane looked at his lung X-ray, left the room and, when he returned, his face was set. The doctor asked him where he’d been working. As the sweetness spread into his cerebral cortex and the chorus of beeps and thumps from the heart monitor subsided into a mosquito-like hum, he didn’t remember that the doctor had said that, once it was there, frosting his lungs, it was too late, or that the clock on his wall was two minutes behind.

There was a dog barking somewhere. A pressure against his hand. The smell of lilacs from the yard wafting in.

He didn’t remember the courtroom where the company executives who testified said, under oath, that the company had knowingly exposed the workers to tremolite asbestos, the fibers working their way into the lungs of the workers, as well as townspeople, more than 200 to date, the graveyard taking on the look of a church luncheon with its eternally cheerful silk flowers lined up, row after row.

He was traveling, traveling down the narrow road that snaked around the Bull River, traveling with his scoutmaster, Mr. Edgarton, an odd man, but kind. He’d helped them sell firewood, popcorn, homemade Rice Krispies bars, and fireplace tongs they made themselves, forging them in Mr. Edgarton’s smithy — raising enough money so the eight boys of Troop 45 could attend the World Boy Scout Jamboree of 1967. All of them packed and sweating in the July heat, windows down in Mr. Edgarton’s Ford Fairlane, singing, “And the Caissons Go Rolling Along,” and as dark forests and silver rivers spun by, the boys cried “whooo” as they rode up the hills and “wheee” as they rolled down. It was dusk by the time they arrived at the navy training base in Farragut State Park on Lake Pend Oreille.

All he could do was stare until his scoutmaster told him to stake the tents or they wouldn’t get any sleep that night. It was a town of boys. Negro, Japanese, Jewish boys, boys with freckled faces, shaved heads, boys with strange drawls, all of them moving, talking, jumping like herds of antelope, quick-moving, running and swooping across open ground. Twenty camps, 47 troops, 12,000 boys.

He woke the next morning, sweating in his flannel sleeping bag printed with hunting dogs, staring at the seamed canvas tent. Mr. Edgarton shouted, Breakfast, 7 a.m. sharp. Up and at ‘em! He pulled on his underpants, pants, belt, and his blue shirt heavy with badges his mother had stayed up the night before to sew on — badges he’d earned for fire starting, wood skills, and backwoods emergencies. He climbed out of the tent, squinting. Before him were hundreds of pup tents under the large cottonwood trees at the old naval base where submarines had been tested during World War II. It was as if the war had just picked up again, only the troops were quarter-sized.

Seven days organized around fun. Swimming. Water skiing. Hiking. A Wild West rodeo. They were even on television, and he stood just inches from Jimmy Stewart, holder of the highest scouting award, the Silver Buffalo. Stewart later narrated the show about the 12th annual Boy Scout Jamboree. He didn’t remember how he had ached to be the Eagle Scout who received the U.S. flag from astronaut Scott Carpenter. Or how new the words sounded here, the pledge he had recited each week in the Lutheran Church basement: On my honor I will do my best to do my duty to God and my country and to obey the Scout Law; to help other people at all times; to keep myself physically strong, mentally awake, and morally straight.

There’d been a Skill-O-Rama where boys demonstrated how to start a fire without a match, how to tan a deer hide, how to make a rope chair, how to build a bridge out of logs, how to navigate by the stars. The Coeur d’Alene, Idaho, troop with their original song based on an old Indian myth about the lake monster, the Paddler. The presentation from Okinawa, Japan, on the art of cloud watching. The Lewistown, Montana, troop’s demonstration of bird calls: a duck, a goose, a meadowlark, and the clincher — the eerie yodeling loon.

We’re sunk, Eddy, his best friend, was saying. Totally, completely sunk. No way we’re going to win that Skill-O-Rama prize. Might as well kiss that goodbye.

He didn’t remember that he was furious with Eddy as he stepped in front of their booth and the crowd hushed as his troop members circulated among them, handing out sample sacks of their magic rocks.

He held out the matchbox, slid it open, and pulled out a wooden match.

Even now, he couldn’t remember how the green grass, blue shirts, canvas tents, and white buildings blurred, and he took a breath and the words came straight out of his mouth, bypassing his brain, flying out from some deep cosmos inside him. So many came from towns like his, tough towns, where the dads worked in mills or gas stations or in the woods and moms scrambled to make ends meet and the kids went to school and tried to stay out of trouble, but guess what?

They were all watching the match, waiting.

This rock, he said, is vermiculite. When you light it, it expands and grows! It makes insulation to heat our homes, ink to print our school books, crayons for the kiddies. And it makes our town sparkle! We put it in our gardens, our sidewalks.

The boys were looking away, he was losing their attention.

If you light it, he said, it burns.

Fire. Their eyes were on him again. He could feel the crowd’s hush as a physical presence.

He wouldn’t remember the pounding of footsteps afterward when the boys ran up to question him: How could a rock do that? What was it called again? Did he have extra samples? What would happen if he lit a boulder and rolled it down a hill, would it light the town on fire? What if he lit large rocks and blasted them at the Russians? All the while, the head scoutmaster was shouting for order, the bugler blowing his horn — they were mounting a podium and they’d won the Special Exhibit, First Prize, Troop 47 from Libby, Montana. Mr. Edgarton held the trophy, all them laughing, Eddy slapping him on the back, saying, Where’d you get that bunk about how our town sparkles? Man, you’re a gasbag.

As he settled back on the pillows and light striped the sheets, what he remembered was this: the scratch, hiss, and tcchht as the fire rose from the match. He held it to the rock on the tin pie plate his mother had loaned him and the rock popped, expanded, and grew porous as angel food cake. As he looked at the boys’ faces — bright, pink orbs — they opened their mouths, sucked in air, pursed their lips and then, in one long exhalation, said, Wow.