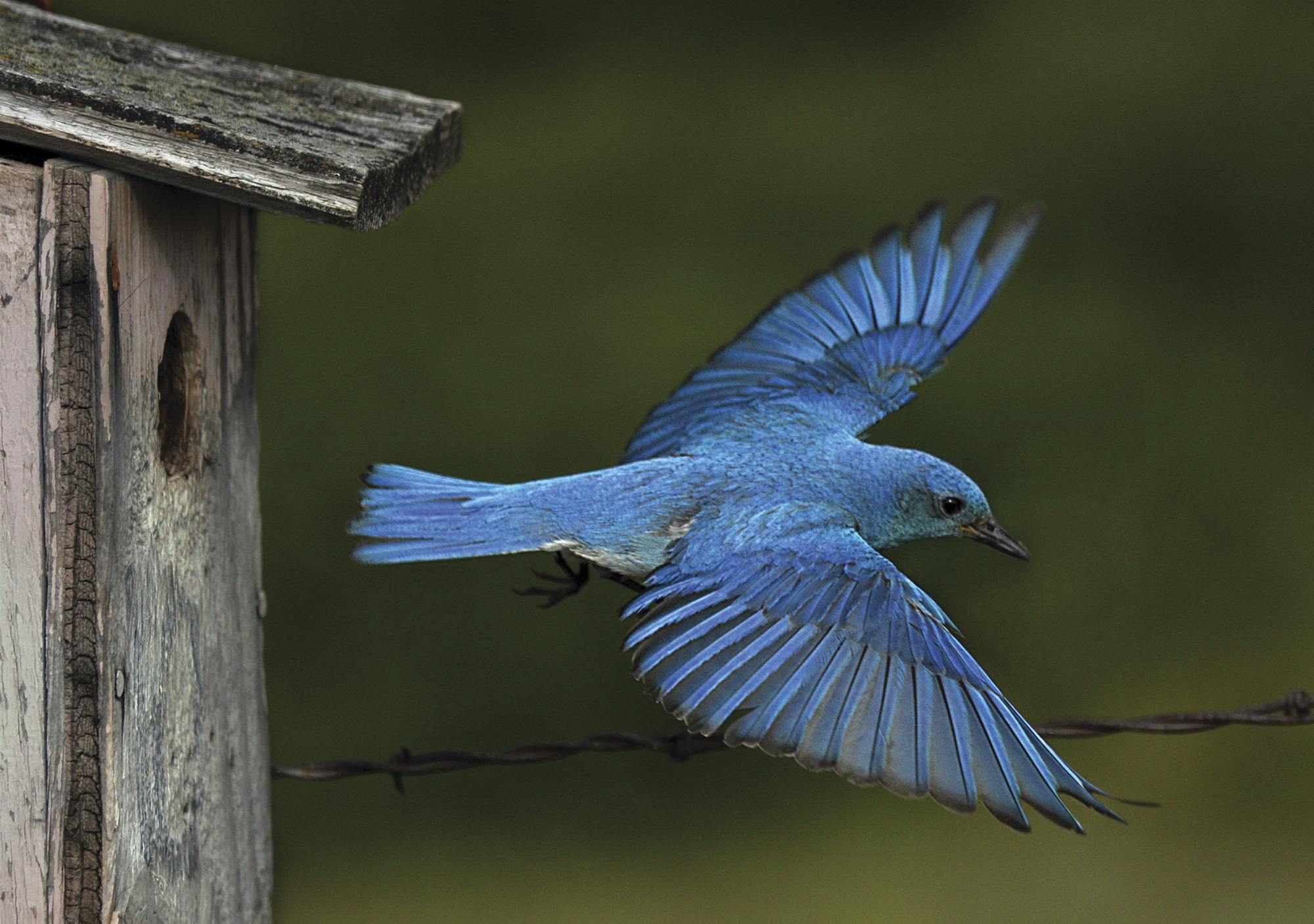 20 Aug The Bluebird of Happiness

MANY SONGS HAVE BEEN ABOUT BLUEBIRDS, including a popular song titled “Bluebird of Happiness” by Edward Heyman and Sandon Harmati in 1934. In song, film, poetry and literature, the bluebird is truly a bird of beauty, joy and good health.

In Montana, three bluebird species exist: Eastern, Western and Mountain. All three species can be identified and categorized by their blue color and plumage. Eastern and Western bluebirds have a chestnut red that contrasts with the blue-colored body. Male Mountain Bluebirds have a full, brilliant blue head, back, wings and tail. The females are gray with blue on the wings and tail and sometimes have a pale reddish throat and breast. The migratory Mountain Bluebird, a member of the thrush family, has a life span of approximately three years and can be found in open meadows, agricultural pasture and near brushy areas throughout the western part of North America.

Before egg laying begins in late April and early May, females spend from several days to more than a week building a nest from grass, twigs, bark, wool and, sometimes, feathers. Females lay one egg daily with the average clutch size being five to six eggs. The eggs range from pale blue to blueish-white.

Though the North American bluebird population is healthy and prolific, it’s always a thrill to hear their warble and spot them, often swooping and dipping from bird box to fence post.

Henry David Thoreau once said:
“The Bluebird carries the sky on his back.”

After three years of photographing Mountain Bluebirds in flight, curiosity drove me to capture images of what actually happens inside a bluebird house.

I  began by cutting a traditional bluebird house to fit a Canon wide-angle lens without allowing in additional side lighting. The location of the hole had to be just the right height in order to record the entire nest without disturbing the birds and their regular activity. It took some experimenting, but I built my own bluebird nest using small rocks (to simulate bluebird eggs/babies), and a small, feathered bird decoration.

Next, I needed to perfect the lighting, angle and height of the camera inside the birdhouse. Early images were disappointingly black. Using a jigsaw, I cut another 3-inch circle in the top of the house and attached frosted plexi-glass to allow more light inside. It was extremely important that the two holes (camera and light source) had sliding doors to close during darkness, weather and to prevent predators from entering the houses.

Finding the right location for the boxes was the next challenge. I set out four houses in various environmental settings on private property near Bozeman, Montana. To avoid stressing the bluebirds, I built a bird blind that allowed room for a cooler, chair and camera gear. The bluebird houses, along with the 35mm film cameras on tripods, were in place two weeks before nesting occurred, which allowed the birds to become accustomed to their surroundings. After the camera and tripod were in position, I attached a remote control receiver to the camera. With the remote sensor in hand, I walked 18 yards from the birdhouse to make certain the camera would advance.

After several weeks of observing the vacant houses, I was ready to declare the project doomed. But finally the house closest to an aspen grove became active. The aspen trees allowed for beautiful natural lighting.

Once the nest became active, I waited until the parents left to feed, at which time I would exchange the film camera with digital. I kept two additional cameras in the blind: a long telephoto zoom lens and a short zoom for the nearby flying shots. Over a three-week period, I spent the first three hours of daylight photographing the birds.

Being a part of the life cycle of the Mountain Bluebirds was a truly beautiful experience. 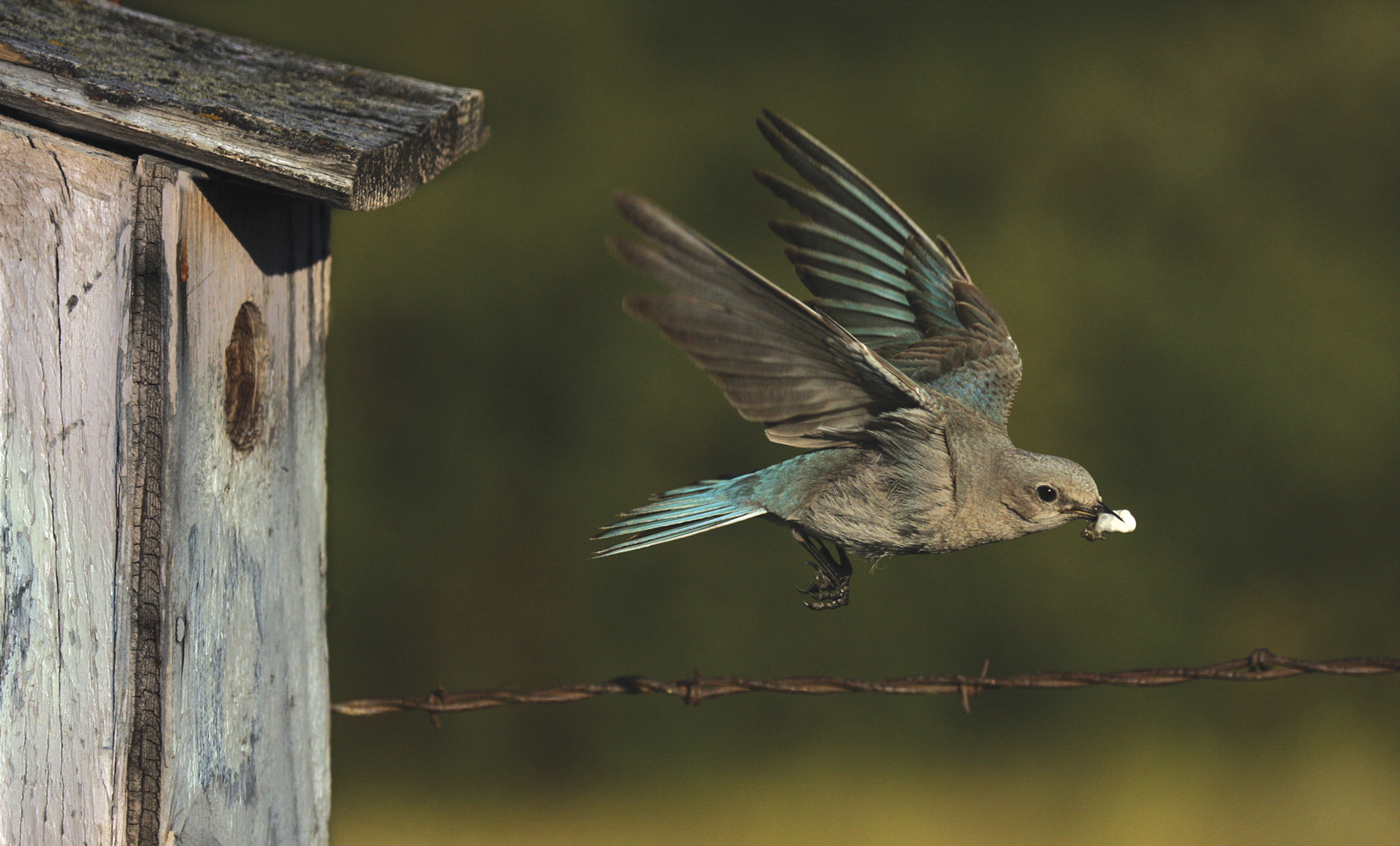 Female with fecal sac — a clean, tough mucous-gelatinous membrane containing excrement of nesting birds. Parents remove the fecal sac from nest boxes and usually drop them away from the nest. 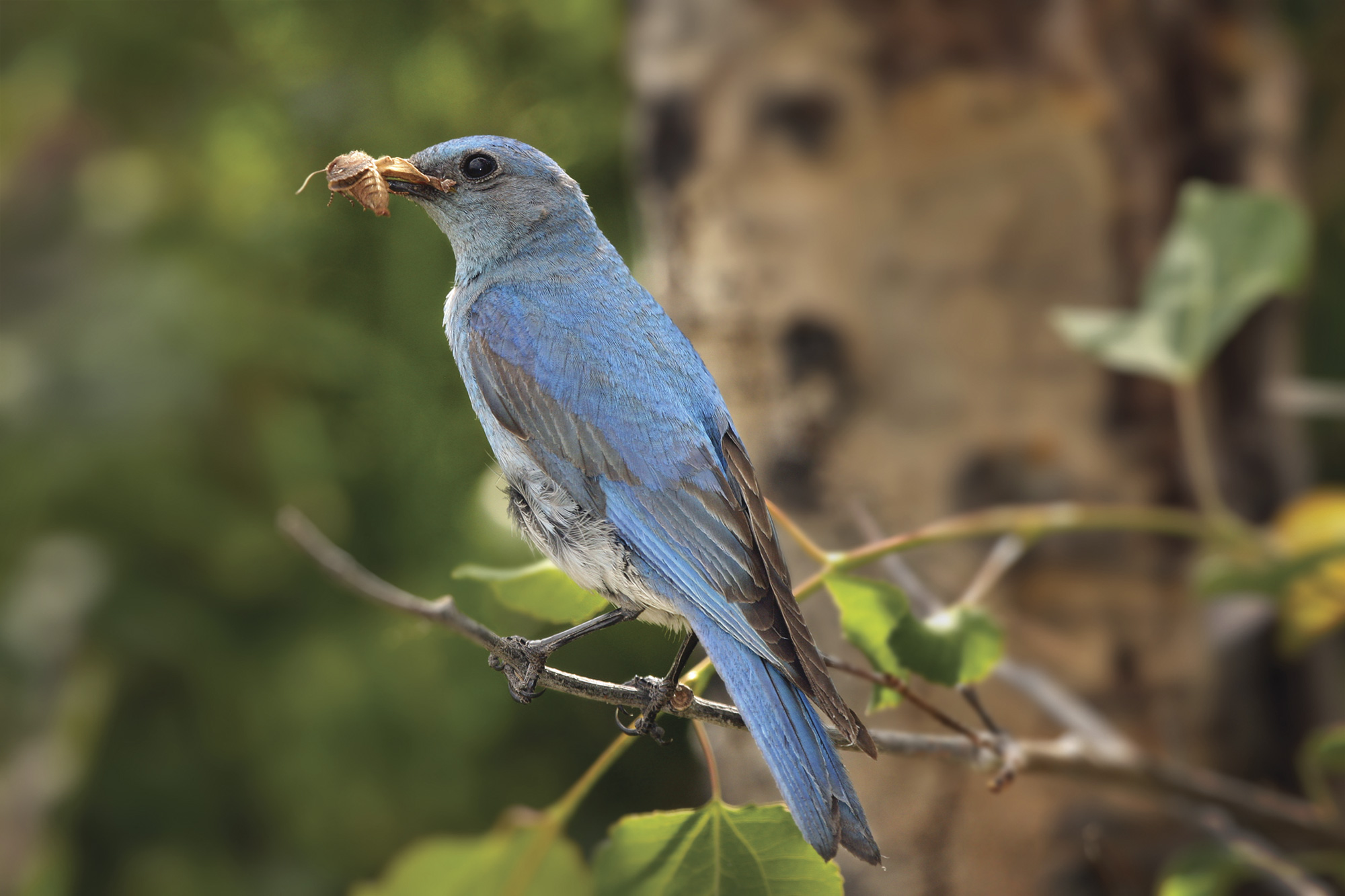 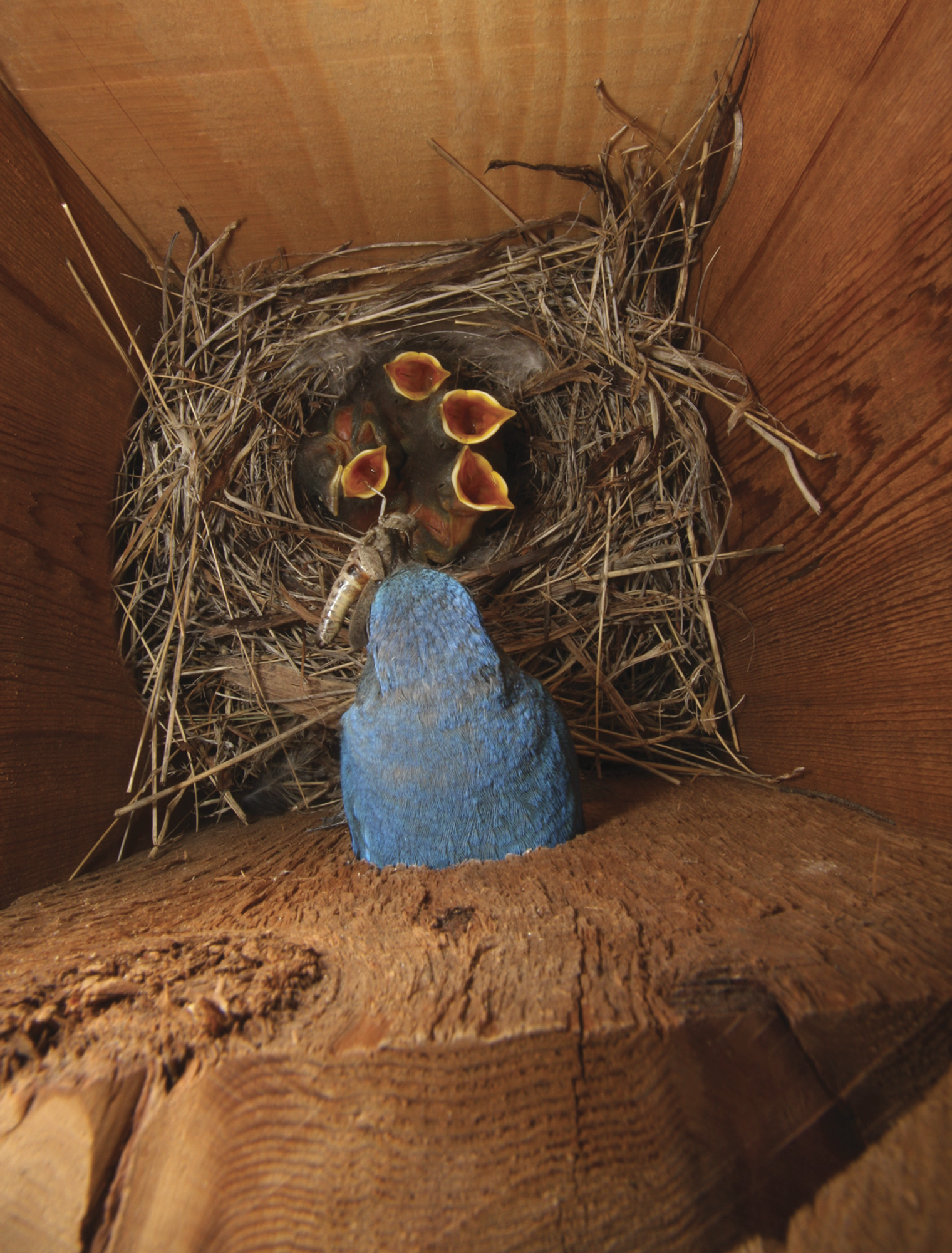 Male feeding young a grasshopper (insects may have wings or legs removed before fed to young). 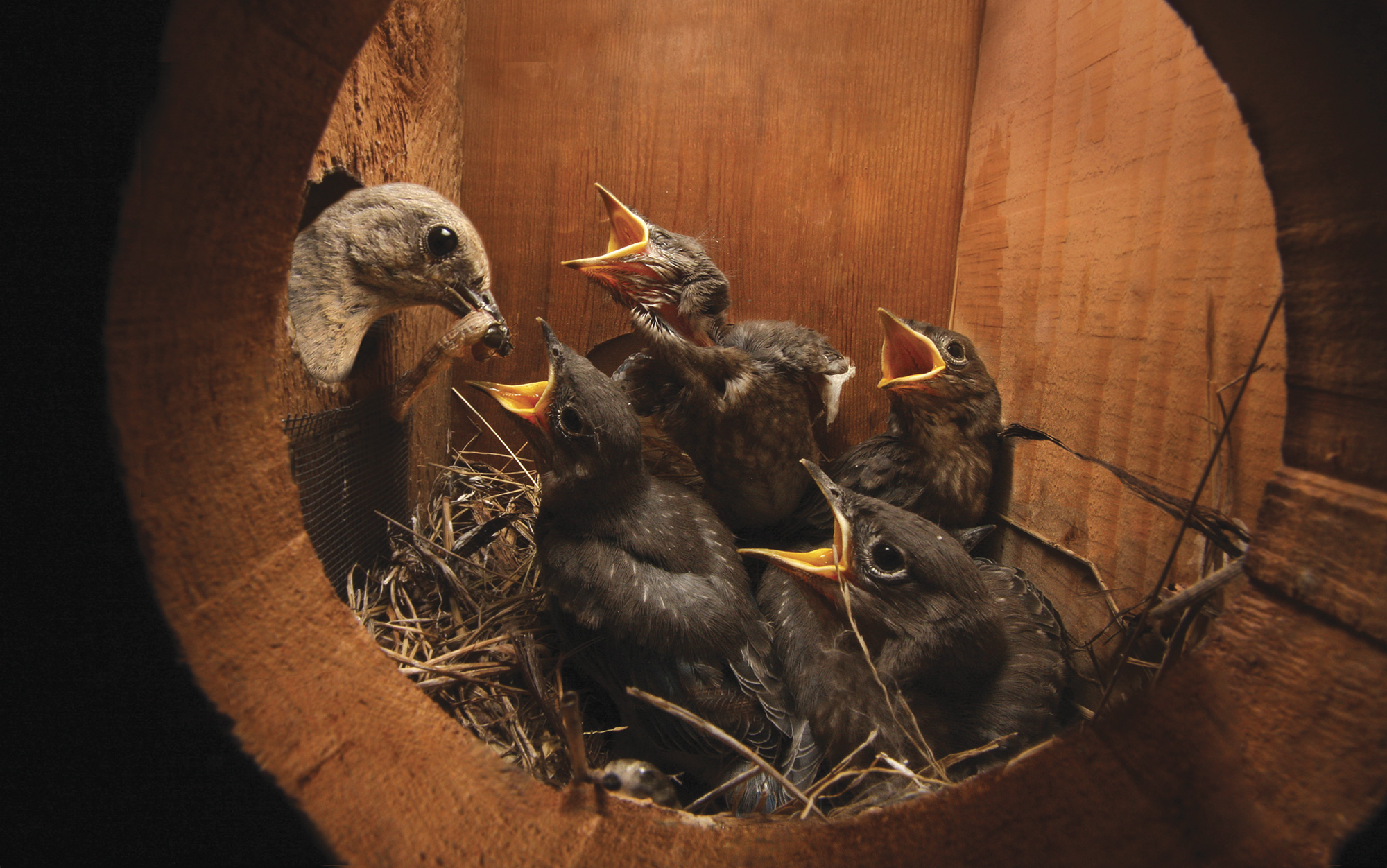 Female feeding young that have feathers and eyes open with some coloration on their wings. 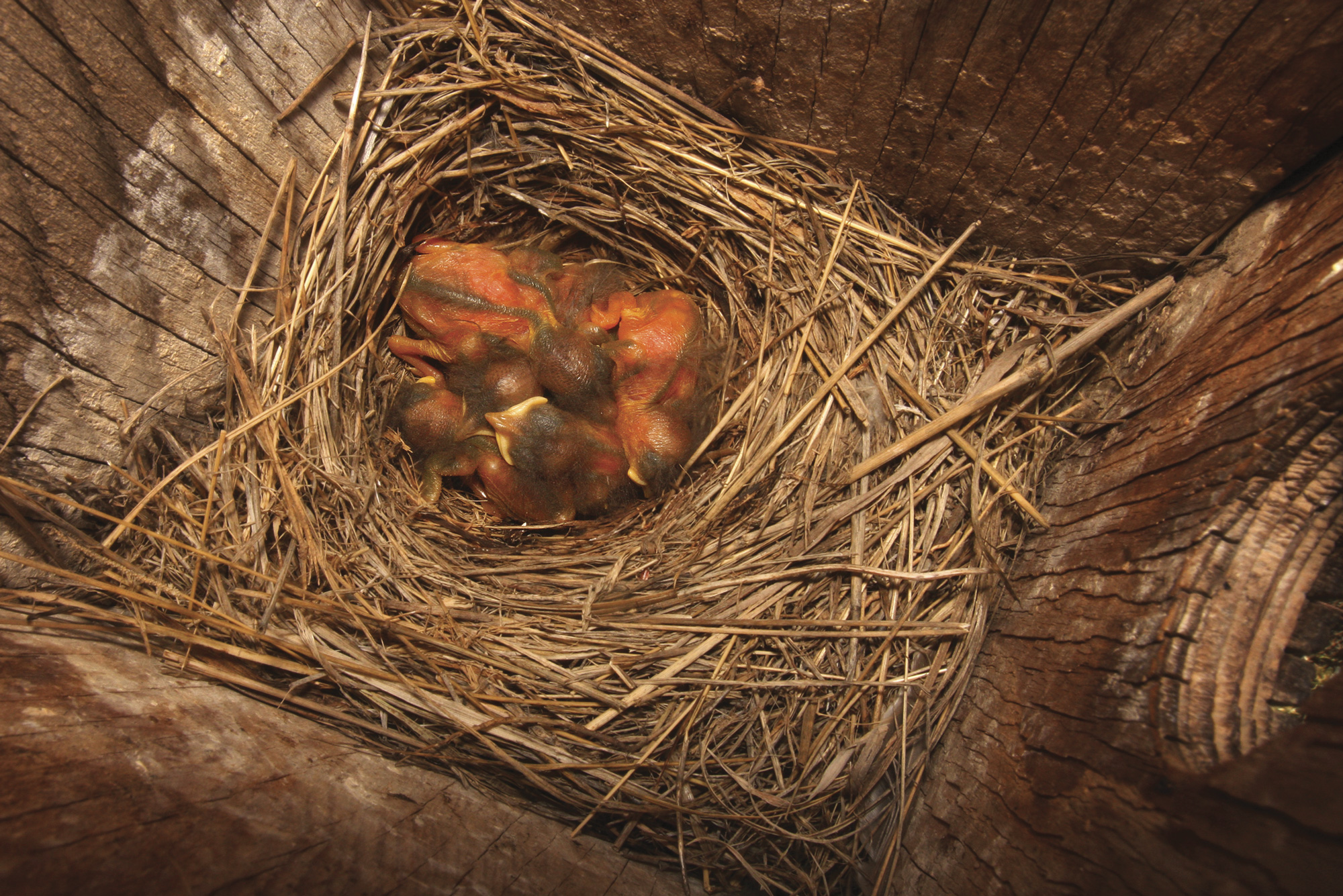 Young bluebirds are blind and naked with some down. 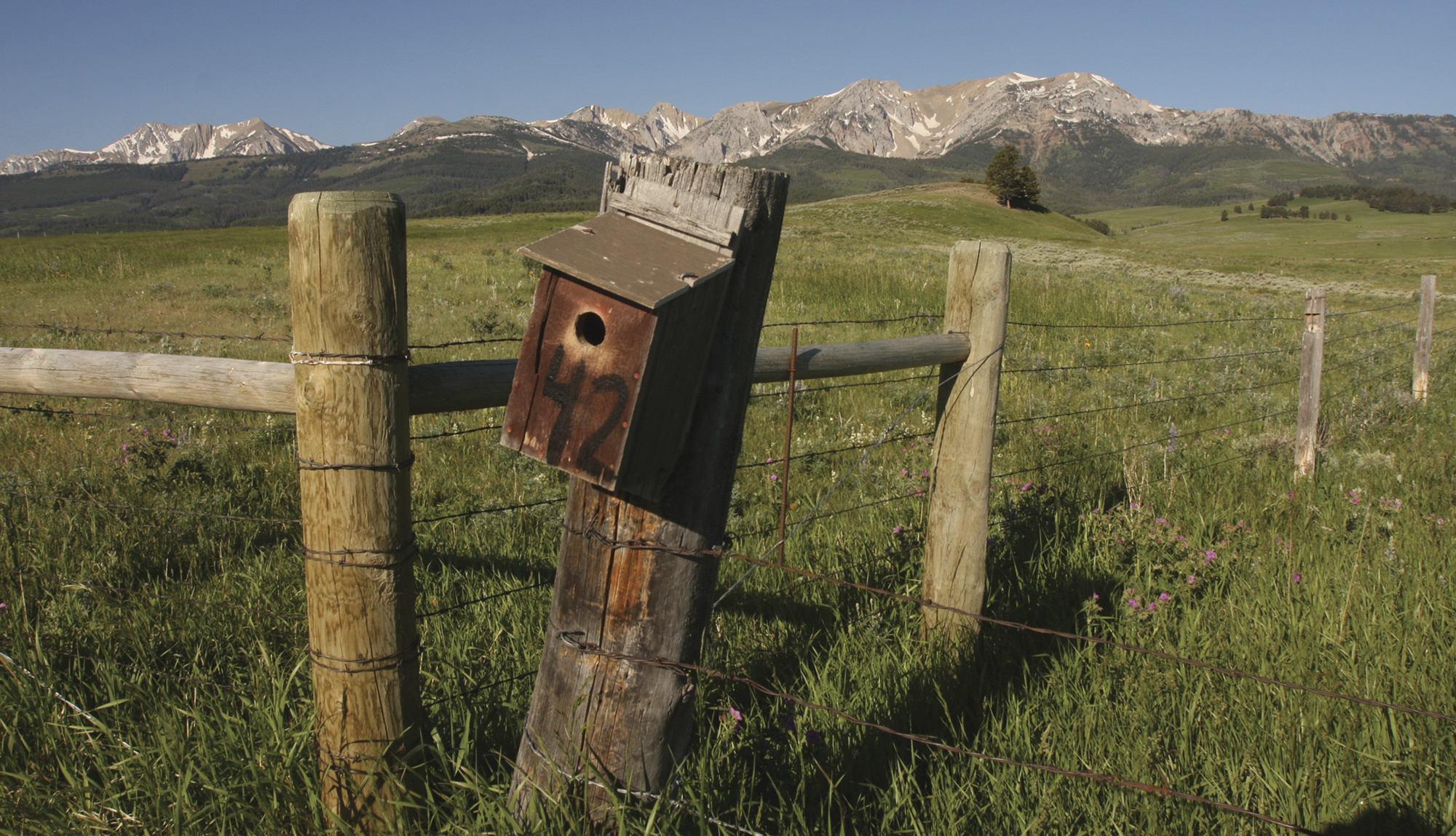 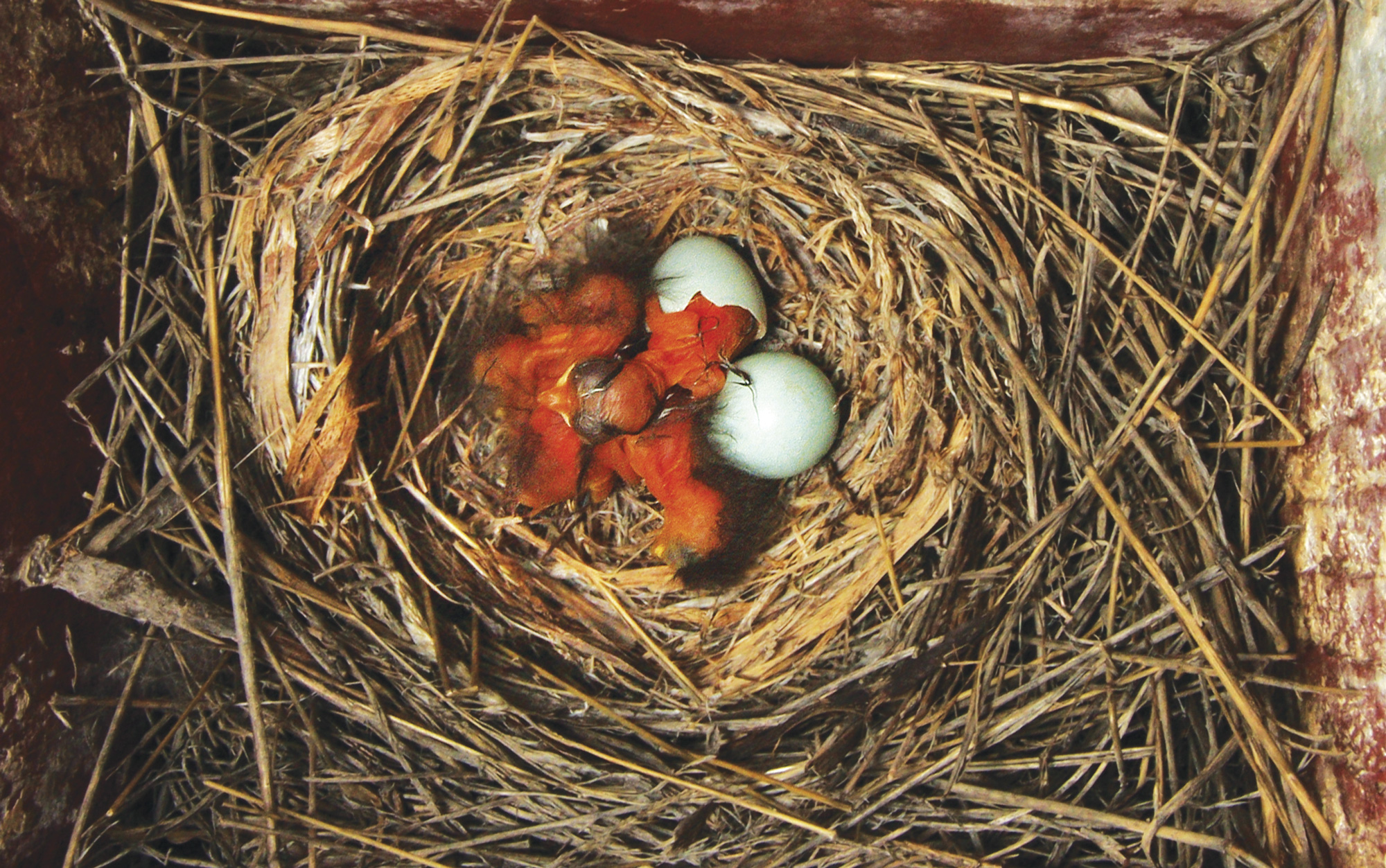 Hatching of young takes about 13 to 15 days.