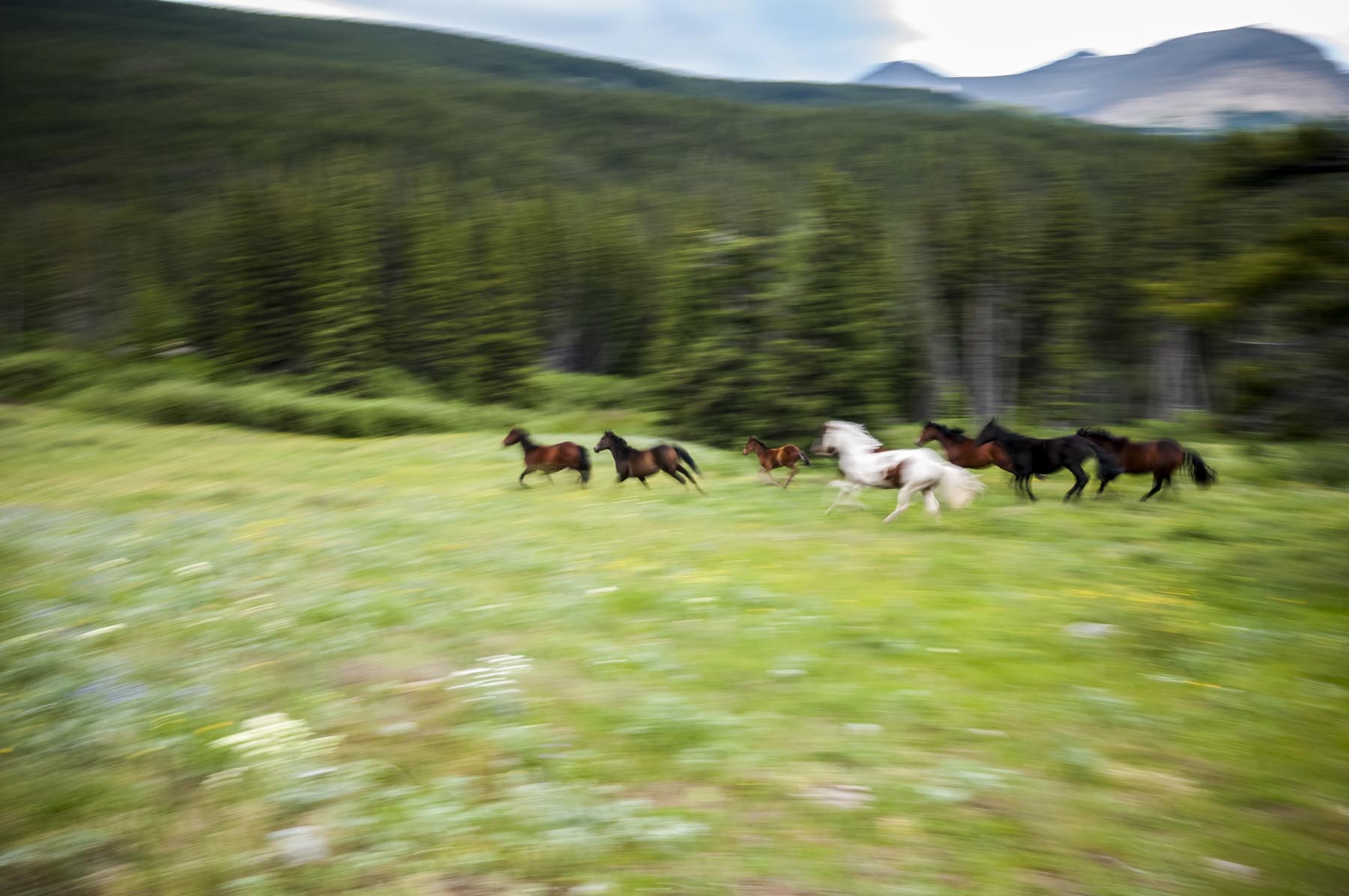 I HEARD THEM BEFORE I SAW THEM, like the rumble of thunder announcing a lightning storm. A visceral hammering that arose from the slopes, magnified in a chaotic rhythm, a discordant beat that resounded off walls of balsam firs. I could feel the pulse of the men yearning for adventure, danger perhaps, the wild horses fleeing the chase. I was searching for a century-old wild horse trap with seven other riders. I imagined the pounding hooves, the whoops, the acrid heat of horses and sweat-soaked wranglers.

I became lost in a tension that was punctuated by the crack of a thunderbolt splitting the seams of air above our heads. I felt we were at the roof of the world and it had blown off. That we dared to go too high — or the gods too low — into the fury of a storm that careened off cliffs and doubled back in endless echoes. Lightning loosened the heavy skies instigating continuous rumbles on all sides. I felt closed in last summer on the Big Grassy in the Highland Mountains of southwest Montana. Closed in as if all avenues of retreat suddenly become obsolete. That was the idea.

My mind flashed images of the past, recreated a drama 100 years old in concert with the very real presence of the thunder. At dawn the men circled the grazing herd, hollering to send the startled bunch toward the animals’ own well-defined trail down the mountain. I envisioned the lead riders as they spun east and west to channel the energy of a locomotive into the hidden trap. A flimsy thing, really. Saplings cut to lengths and nailed to trees. High enough to prevent breakouts, small enough to circle horses back upon themselves so men could close a hand-hewn gate. Sorrels, paints, bays, blacks — all slick with sweat — caught dry pine needles shaken from the trees above. They poured into the corral that couldn’t possibly hold that much horsepower. But it did. Time and again over the years it held. This time the herd milled, tested the fence, roared fear and despair. Lower poles splintered as unaccustomed proximity upset the herd order. Splayed hooves pawed damp earth, the scent of turf and moss and pine mixed with the smell of sweat and manure.

A piebald mustang bared teeth. A blue-eyed paint skittered, shied back and chose to remain with her herd. A spring colt was soon crushed against poles that channeled horses into the corral. He wriggled loose, maybe crippled for life. A lead mare squealed her contempt, frustrated with every foiled effort to evade the herders. She reared, tried to force her way back and met the drivers’ whips, men and boys who needed or wanted to cut loose on a horse drive, to outwit the instincts of the beasts.

Not all were native wild mustangs. Some descended from stock turned loose when they were thin as skeletons from hardships of the Oregon Trail. Others escaped from early settlers. These herds were the fiery spirits of the wild, the raiders of farmers’ haystacks, the stallions that impregnated blooded brood mares on ranches and lured them away. The cache of horseflesh, so to speak, when old teams wore out and saddle horses went lame. The Big Grassy was a place of last resort for the herd harassed by settlers and gradually fenced out of grazing land below.

My gelding whinnied, side-stepped in fallen trees offering a mocking invitation for a horse wreck, jarring my mind back to the present. I leaned forward to stroke frosty drips of rain from his neck, warm my hands in his mane.

Mist hushed the mountains to the west, thick with white potential, like half the sky decided to roll over the Big Grassy that day. Testing our mettle. Humoring us with its soft edges filtering down among spears of the forest, quieting the camp jays with their screechy alarms, a wet greeting at the artifact at 8,000 feet. The Big Grassy. A rockless dome asserting its place among the blue shale peaks of the Highlands. I had seen it for years. Yet I hadn’t seen it. Once you know it’s there you can’t miss it, like an extra thumb on a hand. It struts overhead in tux and tie, fringed by black timber trailing foothills at its knees. I hadn’t noticed that spring cajoled a grassland there on the edges of the sky like a joke on these lesser meadows. As if some benevolent hand shaped a monstrous round mountain for fun where it oughtn’t be. A big kid in school who stood out with pants too short, shoulders too wide and teeth missing from playground fights, the Big Grassy. Over the years I hadn’t discerned that unblemished snow covered the dome in winter or that straw-hued grasses of autumn hid in harmony with sunsets beyond. It slept just there, framed by the wilderness. How could I not know the Big Grassy in my 75 years? The Rockies were an extension of myself, my soul bound in the beauty and mystery of granite range melding into metamorphic range into limestone hills?

Cold settled in, icing my fingers in the mid-summer mist that soon sliced us with rain, my horse Stetson and I, and other backcountry horsemen. Drips formed on pine bough shelves until weight emptied them onto the thick forest floor. Spatters circled my hat, decided to run down the back of my neck inside my old Navy jacket. The warmth-stealing drivel that became a downpour left me soaked to the skin. Sleet whitened the turf of the old corral as our horses fidgeted, turned rears into storm. Sadly, I turned my mount with the other riders to head down the mountain, leaving the Big Grassy to the elk.

Leaving felt like a final chapter. Like closing the door on something important. That the roundup meant more than the sum of the chase, the adrenaline, the weather. It represented our dreams of wildness and freedom and jousts with personal dragons that drive chaos into our circles of family, friends and spiritual quests. For a time the thin air sucked into heaving lungs gave us a taste of another world, perhaps a higher one, where thunder claims authority, where we accept humility and some guilt as the price we pay to live in such splendor of nature.

They haven’t run wild horses off the Big Grassy for quite a while now. But for a time in the light-headedness of altitude and fury of nature, I felt the drama, the vibrations on the earth spurring the blood in my veins, engaging me in a time and place long gone except for the weather-blackened poles of the horse trap relic. Sensing the energy of the wild horses stirred something primitive in me. In a lucid dream, I had run with the horses, free on the Big Grassy under golden skies among low clouds claiming the heights as home, each breath a dizzying inhalation of pure air over nurturing slopes. I knew spring frolics of ancient equine games and the chill of winter shelters in dense timber. I could run but I couldn’t always avoid being caught.

The storm that broke over our heads was not a dream. Thunder still seeks its solitude among uncomplaining stands of pine in the Highlands. Rain and winds sponge the alpine meadow of elk hoof prints, the storms an integral part of the alpine climate. The corrals, along with well-preserved pictographs and the heritage of the Lewis and Clark exploration of the Jefferson River, are all treasures of Madison County in the southwestern corner of Montana.

I take away a glimpse of history from the Big Grassy. Below, ravens squawk at 30-foot RVs where campers might view Westerns with made-for-TV horse roundups. But I hurried down the mountain on Stetson feeling as though we had lived the real thing. Skies lifted. Bitterroots splashed bright petals underfoot. We left behind an experience that I, and few others, will likely have again. 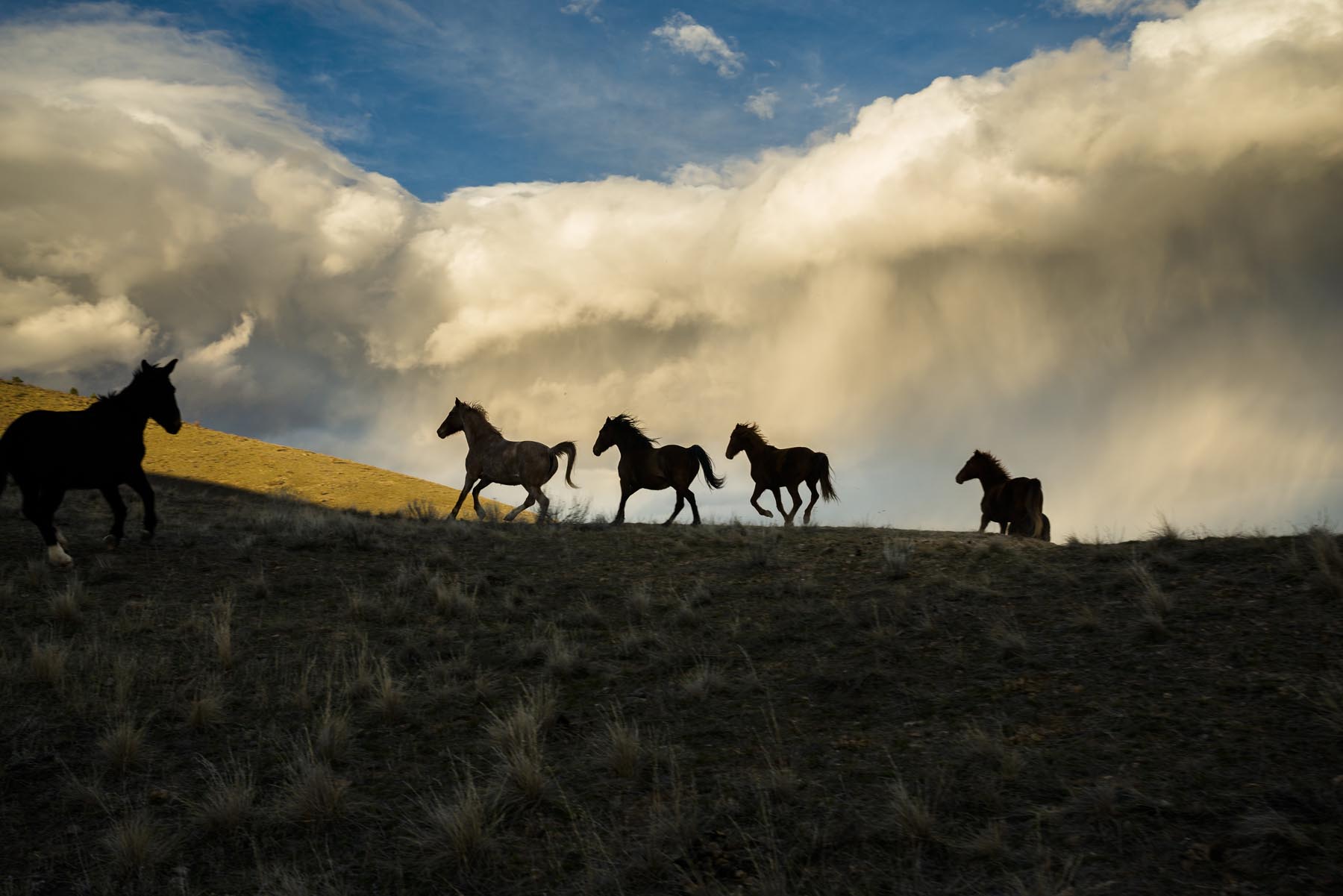 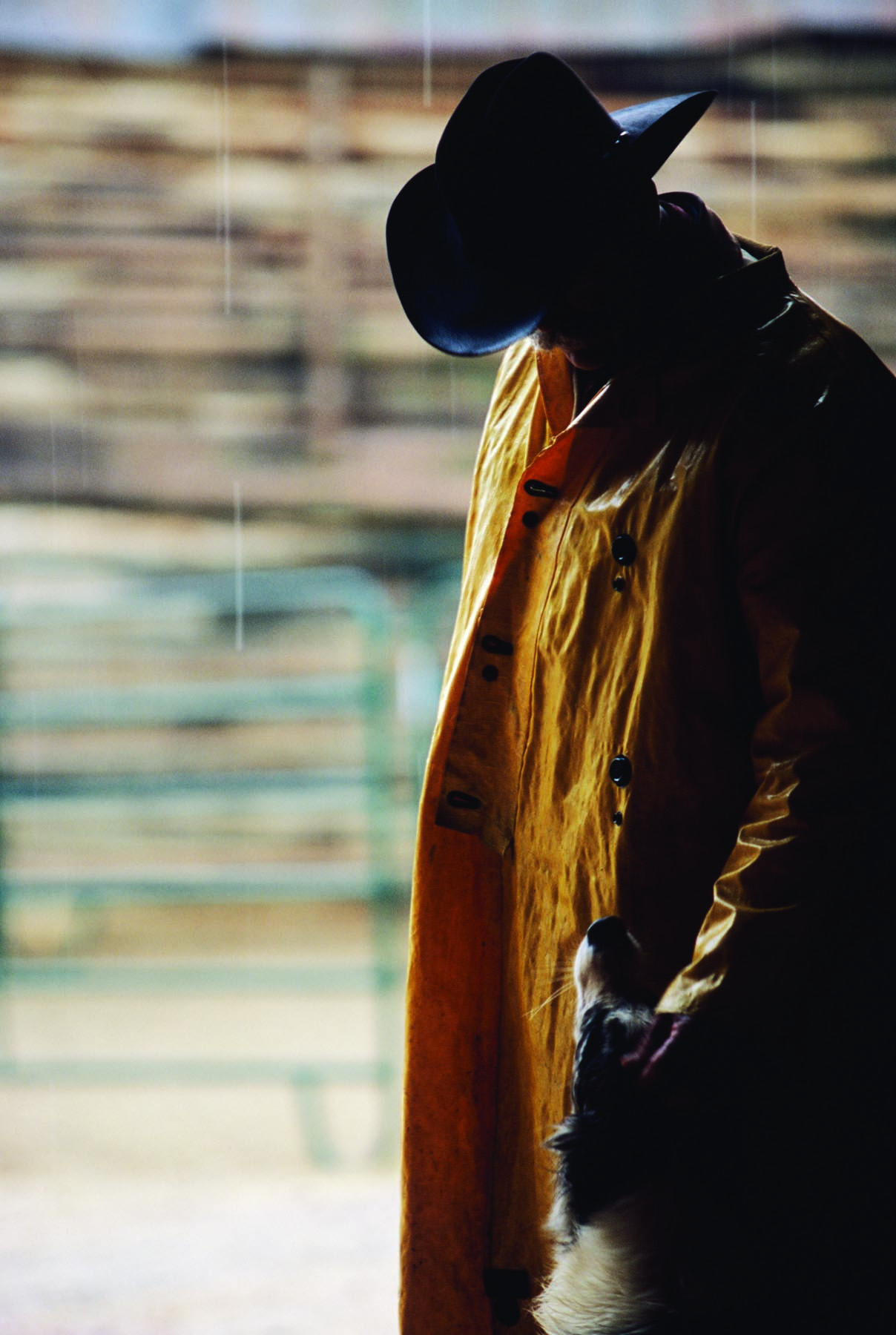