This one-room schoolhouse was built around 1912 north of Havre, Montana. In 1922, Norwegian settlers turned it into the Cottonwood Lutheran Church until it closed its doors in the 1950s. It stands today as a testament to the faithful dedication of the early settlers of this region.

09 Aug The Beauty in Decay

An old building cloaked in pale pink stucco seems to blush beneath the enormous sky over Montana’s Hi-Line. Cracked, crumbling, and faded by the sun, Sacred Heart Catholic Church sits on the edge of the Fort Belknap Reservation and was built by Jesuits in 1931. Though its graveyard is still in operation, the church itself has been abandoned since 1964. The structure is unique due to its Southwestern look, a style not commonly seen in these parts. But it does have much in common with the other historic structures that still exist in the rural West: It’s empty, unused, and stands a good chance of vanishing. 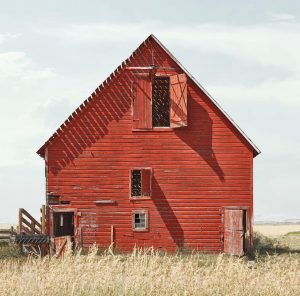 Located on the homesteaded land of Paul McCormick, known as the “Grand Old Man of Montana,” this small cattle barn became part of the 240-acre Norton Ranch in 1934. Today, even as the land around it has been developed, this lone barn still stands.

“These icons that are part of our country’s rural heritage are disappearing fast,” says Jim Westphalen, a photographer who has spent the past decade assembling a body of work he calls “Vanish,” which captures barns, grain elevators, one-room schoolhouses, and other structures from America’s past.

The subjects of Vanish have held a lifelong fascination for Westphalen. “It actually goes back to my childhood,” he says. “I was raised in suburban Long Island, New York, and every summer, we would spend time with my grandmother in the Pocono Mountains in Pennsylvania. That’s where I really fell in love with the country. Even as a kid, I was really enamored by old agricultural buildings — farms, and barns, and all that kind of thing.” 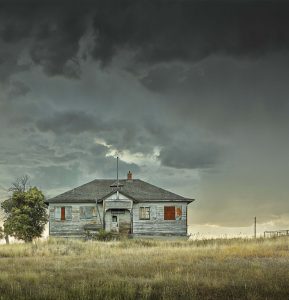 Built in 1913, this one-room schoolhouse in Collins, Montana, north of Great Falls, was in use until 1962, when the Great Northern Railroad changed its route and bypassed the town.

As an adult, Westphalen relocated with his own family from New York to Vermont, where he worked as a commercial photographer. “But any free second I got, I would be out in the landscape, traveling around and photographing the beauty,” he says. For him, the weathered, worn, warped, peeling, and soulful sort of buildings — those that might be said to embody the Japanese concept of wabi-sabi — honor the beauty of imperfection and dilapidation in objects as they age.

Westphalen was struck by how often such buildings would be torn down rather than allowed to stand in all their shabby glory. “It was very shortly after my move that I was noticing this troubling trend: I’d be driving down the same country road for months and realize, ‘Wasn’t there a barn there on that corner the last time I was here?’ Or I would see something I wanted to photograph, and return later only to find a pile of rubble,” he recalls. 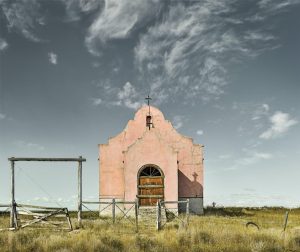 On the southern edge of the Fort Belknap Indian Reservation in Harlem, Montana, the Sacred Heart Catholic Church (also known as “The Pink Church”) was built in 1931 in a classic Mission style that’s more prevalent in the Southwest. Although the graveyard is still in use, with rows of white crosses and headstones, the church has been vacant since 1964.

Consequently, while his photographs were initially inspired by the pure aesthetic pleasure he took in old rural structures, Westphalen’s work was soon driven by mortality — not so much his own, but that of the buildings themselves. “At first it was just the visual element, what I call the beauty in decay,” he says. “And then it started really disturbing me that so much of this is going so fast. It became my goal to travel the country and visually preserve as many of them as possible.”

Coal sheds, or “coal pockets,” were once a common feature in railroad towns through-out the Northeast. This structure, used by the Randolph Coal and Ice Company in Randolph, Vermont, was built by Richard B. Osher in 1912, and the two silos were added in 1919.

Thus far, his travels have taken him throughout New England and into Montana, where the wide-open landscapes and wild weather suits his work’s sensibility: at once serene and suffused with mood. “I like to photograph with a lot of quiet space around my subject, and that’s so much harder to find in the East, where it’s more often treed in, and there aren’t those big open spaces,” he says. “I’ve always been drawn to the plains.” He creates his images using a 40-pound rig, that consists of a vintage 4×5 view camera that he’s had for 30 years and has adapted with state-of-the-art digital capture hardware.

Westphalen’s photographs have a wistful quality. They evoke daydreams about long-ago happenings, people, experiences, and feelings — all the stories that fade away while time marches unstoppably forward. Initially, he wasn’t sure if Vanish would find an audience. “At first I was fearful that it was too melancholy, but I found out soon enough that I had struck a chord,” he says. 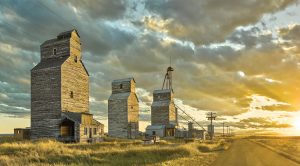 Designed as a town for railroad workers— and formerly called Lake Basin — Rapelje, Montana (pronounced Rapel-j) was renamed in 1913 for J.M.Rapelje, one of the principals of the Northern Paciﬁc Railroad. These grain elevators were built in 1963 for the Rapelje Grain Co.

“Viewers are enamored almost immediately,” says Lindsey McCann, owner and director of Old Main Gallery in Bozeman, Montana, where Westphalen’s large-scale work is shown. “Folks often think they’re looking at a painting rather than a photograph.” This painterly effect is due in part to Westphalen’s proprietary processing method that he developed over a period of many years. Fans also respond to the raw authenticity of the images. “Most photographers capture the ‘beautiful’ aspects of life,” adds McCann. “It’s refreshing to view Jim’s work because of the honesty there.”

In addition to honesty, Westphalen’s images are imbued with another quality: vulnerability. “These old abandoned one-room schoolhouses and churches are literally out in the middle of nowhere. When you think about how these people did this,” he says referring to the amount of effort required to build, work, and even just live on the lonesome plains, “it’s just remarkable, the vulnerability. All of these structures were someone’s dream at one point. They represent people and their lives.” 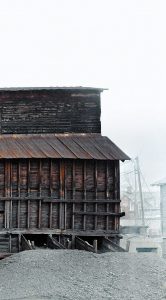 Consequently, Westphalen strives to meet the people associated with the structures he photographs. This has involved some detective work and led him on more than a few wild goose chases, often with rewarding results — such as the time he tracked down a 90-something-year-old retired farmer. Residing in an assisted living facility by then, the man, along with the help of his 9 children, had built and run a now-abandoned dairy farm that Westphalen photographed in Vermont. “Once he heard about his old farm and the fact that someone cared about it, since it had been abandoned for decades, he lit up like a kid,” the photographer says. “We talked for an hour. He was transported back in time, telling stories. It’s so important to talk to the elderly generation and find out about the structures and the stories behind them. Once those people are gone, the stories are gone, too.” 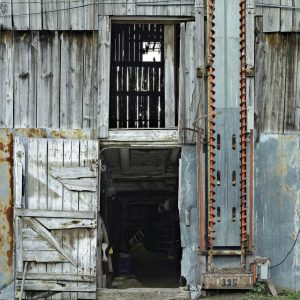 Built circa 1900 as a milking barn for Hall and Breen Farm in Orwell, Vermont, this structure originally housed 16 cows and later became a calf rearing facility after the stalls were built in 1965.Today, the ﬁfth generation of Halls still run the farm.

Westphalen is “a storyteller of sorts,” says McCann. Motion pictures are the natural next step for a photographer intent on recalling the past, and Westphalen currently is working on a feature-length film also called “Vanish.” The documentary will synthesize real-life stories with the images of the structures that gave birth to them. It will also include input from preservationists, historians, and anthropologists to shed light on the significance of these rural buildings, as well as the impact of losing them. 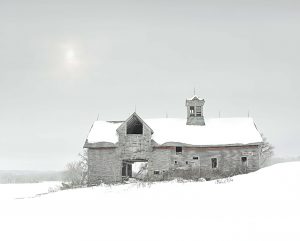 Built in the late-1700s and added onto in the mid-1800s, according to an estimation made by architec-tural restoration experts, this barn in Salisbury, Vermont,was used over the years for horses, milking cows, andhay. Though it’s no longer structurally sound and sits vacant, the current owners run a successful dairy operationon the surrounding land.

“My kids and grandkids aren’t going to see what we are fortunate enough to catch the tail end of today. I want to create an appreciation for what we have right now,” says Westphalen, “because it’s not always going to be with us.”

Though there have been instances, McCann says, when Westphalen’s work has “encouraged others to preserve the old barn on their family ’s land rather than tear it down, or move the old church from down the road onto their land to keep it for future generations,” the photographer notes that he’s not necessarily on a mission to “save all the barns.” 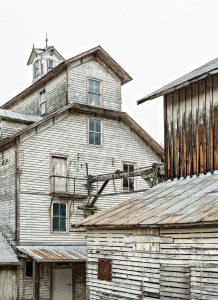 “Although I’m personally grateful for those who go to great lengths and expense to maintain these fading structures,” Westphalen says, “my art is simply meant to encourage people to see the beauty, take notice of what we have for this brief moment in time, and appreciate it.”

Roads Less Traveled, an exhibition of Westphalen’s newest additions to the “Vanish” series, opens on August 7 at Old Main Gallery in Bozeman, and will run until the end of the month.