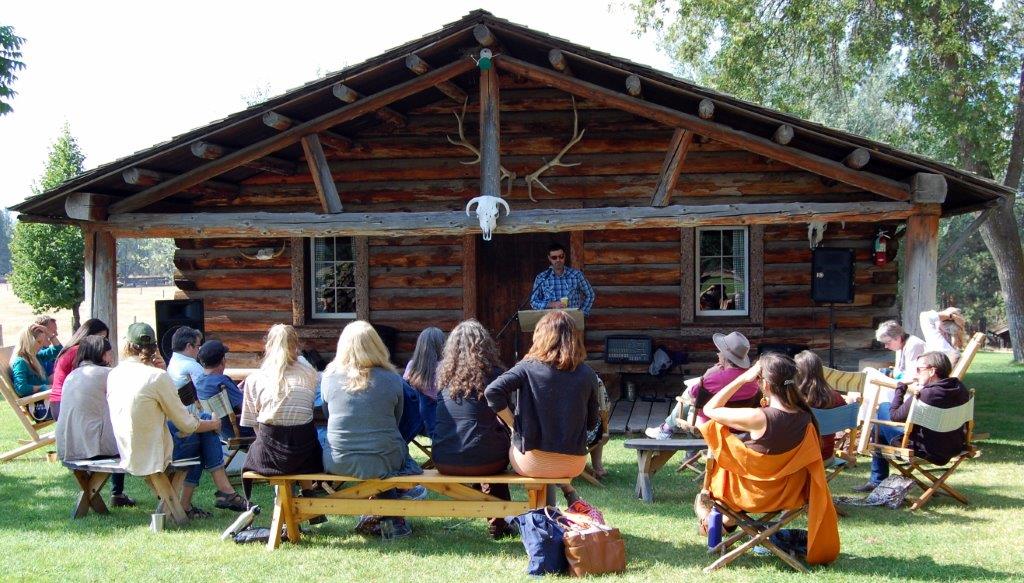 You approach from the west, along the Blackfoot River into the Garnet Range, or, maybe, from the east, skirting the ponderosa stands of national forest. Yet, despite expectation, you are still amazed. Mouth agape. Montana.

There’s a mythology here: The Last Best Place, Big Sky Country, The Treasure State. To be a Montanan, it’s assumed, is to ski, to hunt and fish. What’s more, to fly fish. To overindulge in the outdoors. To hike. Plunge in every river. To own a dog. What’s more, a black Lab. A retriever. All of it, mythology. All of it, mostly true.

But something else is at work, too: you’re in this region, just outside the unassuming town of Clearwater, for the Beargrass Writing Retreat. Montana is also about literature.

You realize this while listening to Annick Smith recite excerpts from her latest memoir, Crossing the Plains with Bruno, during the retreat’s opening reading, located at the E Bar L Ranch. She stands before a handcrafted lectern made from felled logs—quickly, but reliably, built by the property foreman, a horseshoe cup holder to boot. Smith addresses the retreat’s assembly—peers, fledgling writers, admirers—in a lodge seemingly made for the occasion: rustic furniture, granite slate fireplace, bison hide rugs. Books line the shelves. Whitetail graze out the windows. Montana comes alive during the oration, her passages concerning a friendship with Jim Harrison, encounters with Hemingway’s children, escapades with William Kittredge (also in attendance). You feel the spirit, the moveable feast, of Maclean, Stegner, Welch. You feel the legacy.

Montana is about literature.

It’s easy to forget though, this literary heritage. Easy to overlook when juxtaposed to Montana’s monumentalism. Literature is subtle here; it lives in the landscape, hidden in the denizens. Authors move to this state for the solitude. To be left alone. A place where words meet the page. Where books get finished. But this isn’t to say these writers don’t need community, or mentorship, or guidance. Quite the opposite. They’re just elusive—a mountain lion at dusk, wolverines from their snow dens—but they converge, like the rivers that run through it all, at important times and important places. Beargrass is proof.

As the brainchild of Missoula resident and fishing guide Chris Dombrowski (with his own memoir, Body of Water, released October 2016) and the 406 Writers’ Workshop, the Beargrass Writing Retreat has now celebrated its second annual gathering this past August. What’s unique about the event, opposed to other retreats and conferences across the country, is the intimacy: there is almost an even ratio between participants and faculty, giving each attendee the unique opportunity to learn from literary exemplars. You might end up having peach crepes with author David James Duncan for breakfast or enjoying a craft cocktail with director Andrew Smith around the campfire. You’ll meet authors you’ve read for years, that you’ve know through the page, and you’ll meet authors you’ve never heard of, get to know them personally, and count both as new acquaintances. You’ll purchase their books—all supplied through the local independent bookstore Fact and Fiction—have them signed, and later fall in love with the writing. Maybe you’ll meet an agent that wants to see your own work, maybe an editor that’s interested in your current manuscript.

This intimacy not only permeates the quaint lodging and rural ambiance, but almost transcends the four-day itinerary: readings, panels, craft talks, writing exercises. It’s palpable. And, if ever you need a break from the 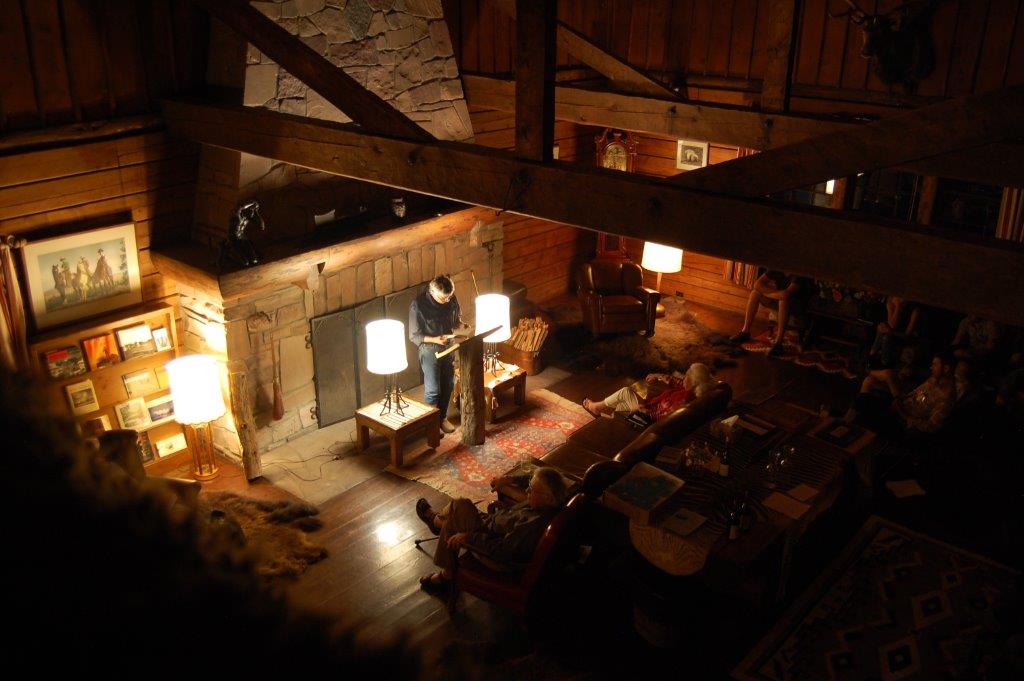 scholastic setting, “Norman’s river” is just down the road; horseback riding a daily extracurricular. Recreation is always available. So are porches with lawn chairs, decks with panoramic views. Coffee in abundance. Fresh cookies from the kitchen.

Beargrass is a summer camp for adults—adults that cherish good writing—and, as such, you make friends. Good friends. Some maybe maintenance workers from Michigan, while others computer programmers from California. Some are retired and reconnecting with a former hobby, others fresh out of college and answering an urgency to artistry. But this doesn’t matter, it rarely comes up, because for the weekend you are poets, novelists, essay writers. That’s it. You are a wolf with a pack. And you feel known when you get to howl, during the outdoor open mic, with four minutes to share your own work with the cohort. It brings you together. As does the cocktail hours, the live music, the meals, the conversations under the stars. The unspoken hardships of loving this lifestyle.

These friendships, though four-days formulated, will continue. These connections will last. Whatever the outcome, you leave as you came, still amazed despite expectation. Mouth agape.

You’ll see Montana differently, not just for the landscape, but the literature. The legacy. You’ll be proud. For you are now, however minutely, a part of it. And then you’ll wait, with the patience that being a writer has taught you, for the snow to fall and melt, the wildflowers to bloom, the tourists to gather, the cougars to roam, the wolverines to emerge, the rivers to converge. You can’t wait to return. 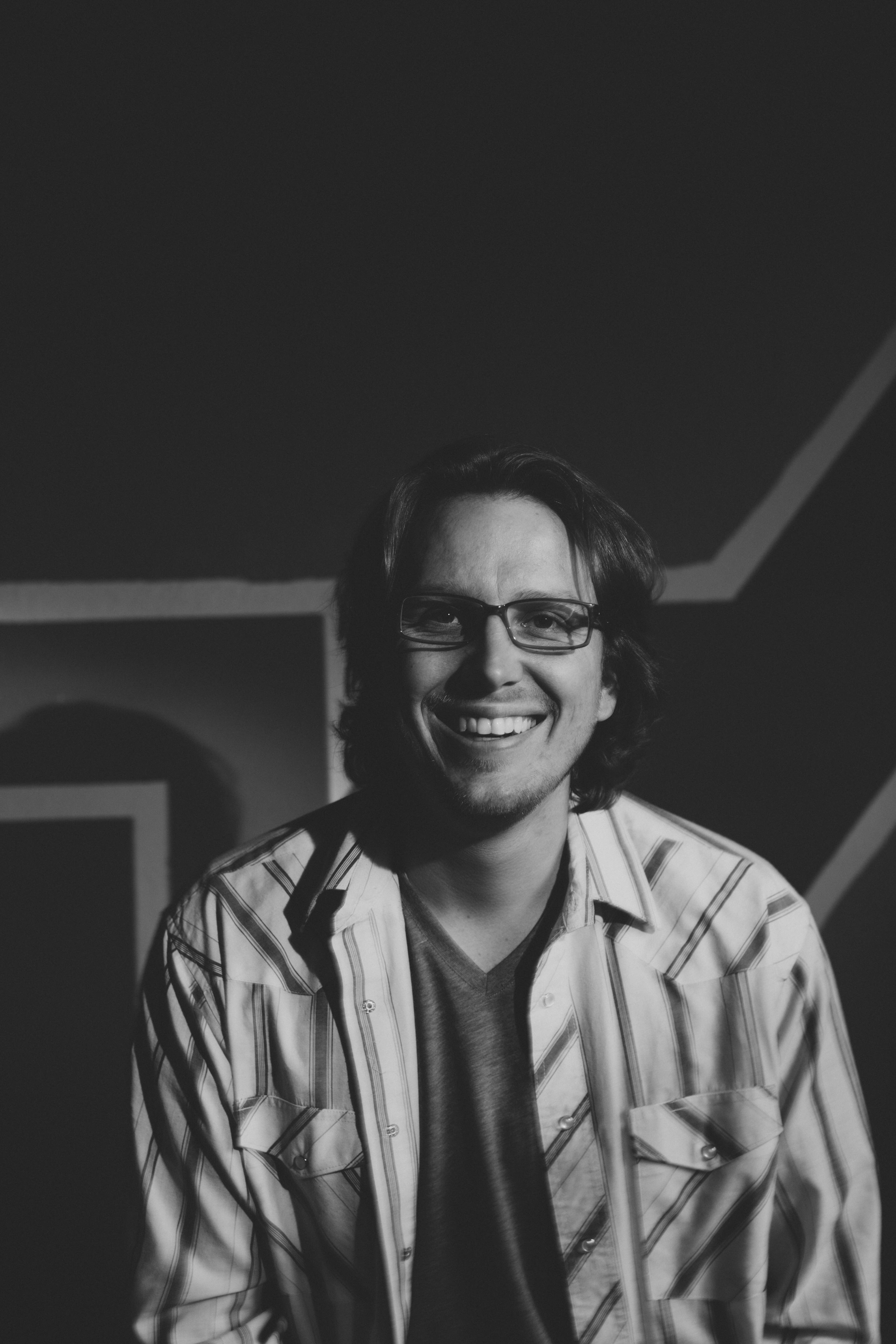 Born and raised in Montana, Tyler Dunning developed a feral curiosity at a young age. This disposition has led him around the world, to nearly all of the U.S. national parks, and to the backcountry of his own creativity and consciousness. He’s dabbled in such occupations as professional wrestling, archaeology, social justice advocacy, and academia. At his core he is a writer. Find his work at tylerdunning.com.