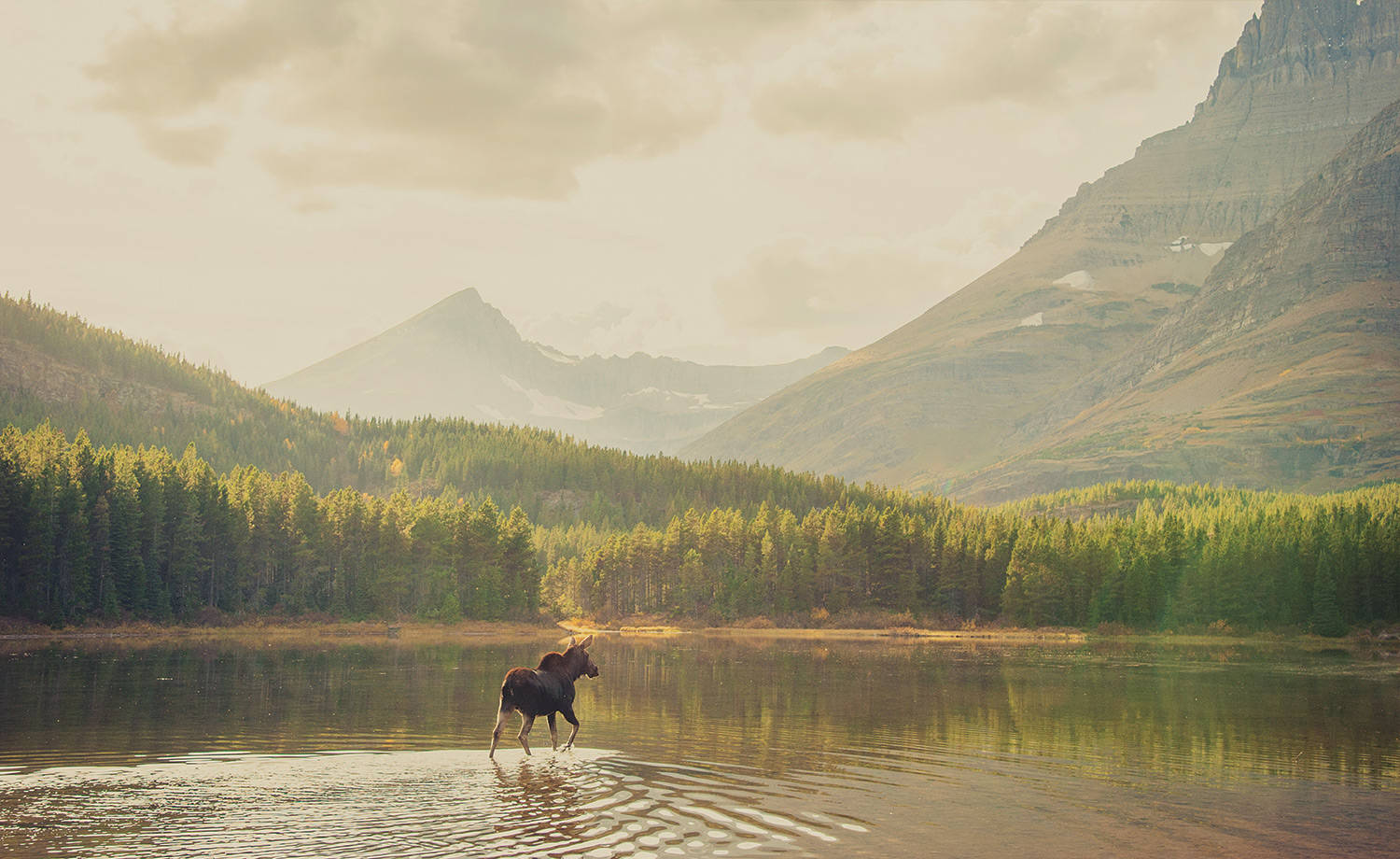 PHOTOGRAPHY, INCREASINGLY, IS AN ACCESSIBLE ART FORM. Anyone with an iPhone can take some kind of photo, and often a pretty good one. At a glance, the distance between a passable amateur shot and a drop-dead professional image isn’t huge.

But then you look closer.

Anyone can take a photo, sure, but the extraordinary shots, these are still rarefied air. They represent the confluence of exceptional technical ability and golden opportunity. Hard work plus an artist’s eye. Especially when it comes to wildlife photography, the difference between what the most talented photographers can capture and what the rest of us might find in the same moment…it’s astonishing.

Part of the trick lies in knowing when to go, and where. When, at least in Montana, is pretty easy. Early morning, late evening. Autumn. Nothing hits the emotional gong quite like fall in the Northern Rockies. Bugling elk, thick-furred coyotes, yellow aspens. Where to go, however, can be trickier. It takes experience, boots on the ground, knowledge of the landscape as well as the animals being photographed.

The Birds of Donald Jones

For the last 25 years or so, Don Jones has made his home base in Troy, Montana. A strategic location, as it turns out. Whitetail deer, moose, elk, he’s not really sure how many digital images are in his files, but he reckons it’s over a quarter million. 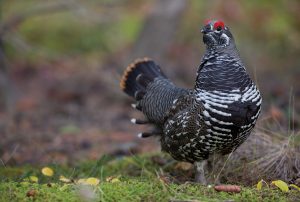 He’s a photographer who resists a crowd, who enjoys the experience of being alone in the woods. And while his bread and butter, he says, are large animals, “You’re really hard pressed to photograph elk and moose by yourself. With birds, though, you can find peace and solitude. From August to mid-December, I’m dedicated to big animals. But by the middle of December, I don’t know if I want to see fur any more. Birds refuel me.”

Most of these images were shot in the Kootenai National Forest, just out his figurative back door. “It takes a while to learn a place,” he says. “I like to go somewhere repeatedly and really create a file.”

Jones shoots with Canon equipment, and for birds likes a 600 mm lens on a tripod. And for beginning photographers, he emphasizes the basics. “Composition is critical. Focus and metering. You’ve got to have it. When you’re shooting a static subject, and it’s always center focus, center focus, center focus, there’s no composition there. I’ve been in the editorial market for so long, I’m consciously thinking left or right spread, square format for calendars.” He also emphasizes doing the bulk of your work with the camera rather than the computer. “I think people pick up a camera to be photographers rather than computer jocks.”

A great gray owl was photographed over a three day period, hunting in the early evenings. Jones emphasized that the owl was not baited. “He caught a vole about 15 feet in front of me.”

He’s been photographing wildlife for more than 25 years, and says, “When you’re passionate about something, you’re persistent about it as well. I’m chasing my passion. I’m doing this for me.” 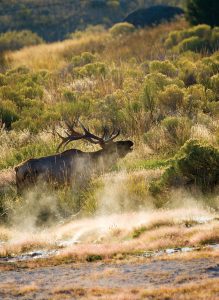 Nothing says fall quite like a bugling
bull elk. Goeddel photographed this one not far from Mammoth
Hot Springs.

Originally from San Diego, California, Cindy Goeddel vacationed in Yellowstone Park as a child. The daughter of an artist and a chemical engineer, she found digital photography in 2005. “It was really a blessing to learn the mechanics of the camera even while I was learning the computer and workflow. I’m obsessive. I jumped in with both feet.”

She now makes a portion of her living by guiding other photographers through the park. “I do three to four winter trips that are each 8 to 10 days long. That’s my busiest season. It’s really special. I do one or two fall trips. I do a spring trip. I only do summer if somebody begs me. I take pro photographers who want the best chance to see the wildlife, and I take brand new beginners that want to get off program mode.”

For a photographer, of course, Yellowstone is a bucket list destination. And for Goeddel, within the Park, Swan Lake Flats is her go-to destination. “It’s really special early in the morning because you can often walk down to the lake and have it to yourself. There can be howling wolves, or trumpeter swans, or grizzlies.”

Having worked with so many different levels of photographers, Goeddel has an uncommon perspective on common mistakes, on the errors that beginning photographers can make. “They don’t shoot on manual,” she says. “And a lot of intermediates, as the wildlife moves, they’re really busy just capturing it instead of looking ahead and anticipating.” 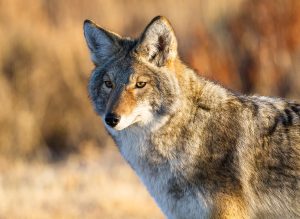 About photographing this coyote in Yellowstone
Park’s Swan Lake Flats, Goeddel said, “I love it that he’s not concerned with me. The intelligence in those eyes.”

In Yellowstone, she encourages photographers to get away from their vehicles. “If you get a quarter mile off the road, you lose the crowds.” She also suggests that if you want to be serious about wildlife photography, you need to study the animals. “You need to be able to anticipate what they’re going to do next.”

Originally from Washington, Tony Bynum moved to East Glacier more than 15 years ago, about the same time that he started building his photo portfolio. Turns out, Glacier was exactly the right place to be. “There aren’t many well-known photographers who’ve spent a lot of time here,” he says. “This place is so remarkable and relatively unseen for most of the year. I thought I could tap into that.”

A hunter and a fisherman, Bynum’s inspiration for his photography has come from his passions for the outdoors and for wildlife. “And then you add the demand to earn a living, you put those two things together and you’ve got something to go on.” 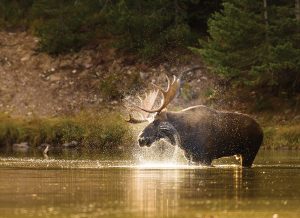 Action shots, such as this bull moose shaking water
off its coat, mean balancing a fast shutter speed with the limitations
of a telephoto lens.

Within Glacier, he tends to gravitate toward many of the most popular places, even while trying to avoid the crowds. He mentions Many Glacier and Logan Pass. “But the last couple of years, I haven’t put a lot of time into Logan Pass. It’s becoming overrun. As a wildlife photographer, being outdoors with wildlife is part of the joy. When there are a lot of people around, I generally pull out. I spend most time there in the early spring and late fall when the traffic goes down and I can get into places I want to be.”

As a photographer, he emphasizes a certain kind of mindfulness. Patience and what he describes as a commitment to time and observation. “If you take your time and move slowly, animals tend to act more naturally than if you run up and take a picture. What I’m after takes patience and self-restraint. The more you move around, the more the wildlife becomes affected by your movement.”

He likes Nikon, and shoots at least a 400 mm lens. “Usually 400 to 600.” When he’s backpacking or working off trail, he’ll take a 500 mm lens. “The 600 is too big and the 400 is not big enough.” For beginners, he emphasizes composition. “Postcard images, amateur style photography, is a picture of an animal on a rock. In professional images, there will be an expression, there will be something unique.” For his part, Bynum is intrigued by large landscapes and small wildlife. “It doesn’t sell well but it looks nice on the wall. If I could just shoot that I’d be happy.” 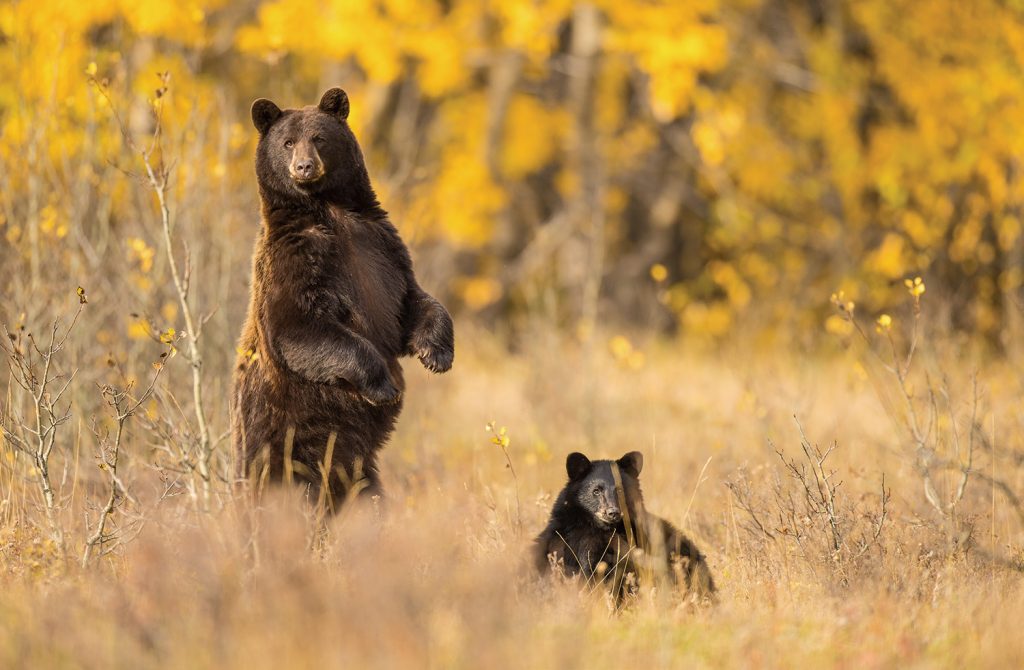 A Glacier National Park black bear sow and cub. For wildlife photographers, Glacier bears present a challenge insofar as visitors are required to maintain a distance of at least 100 yards.