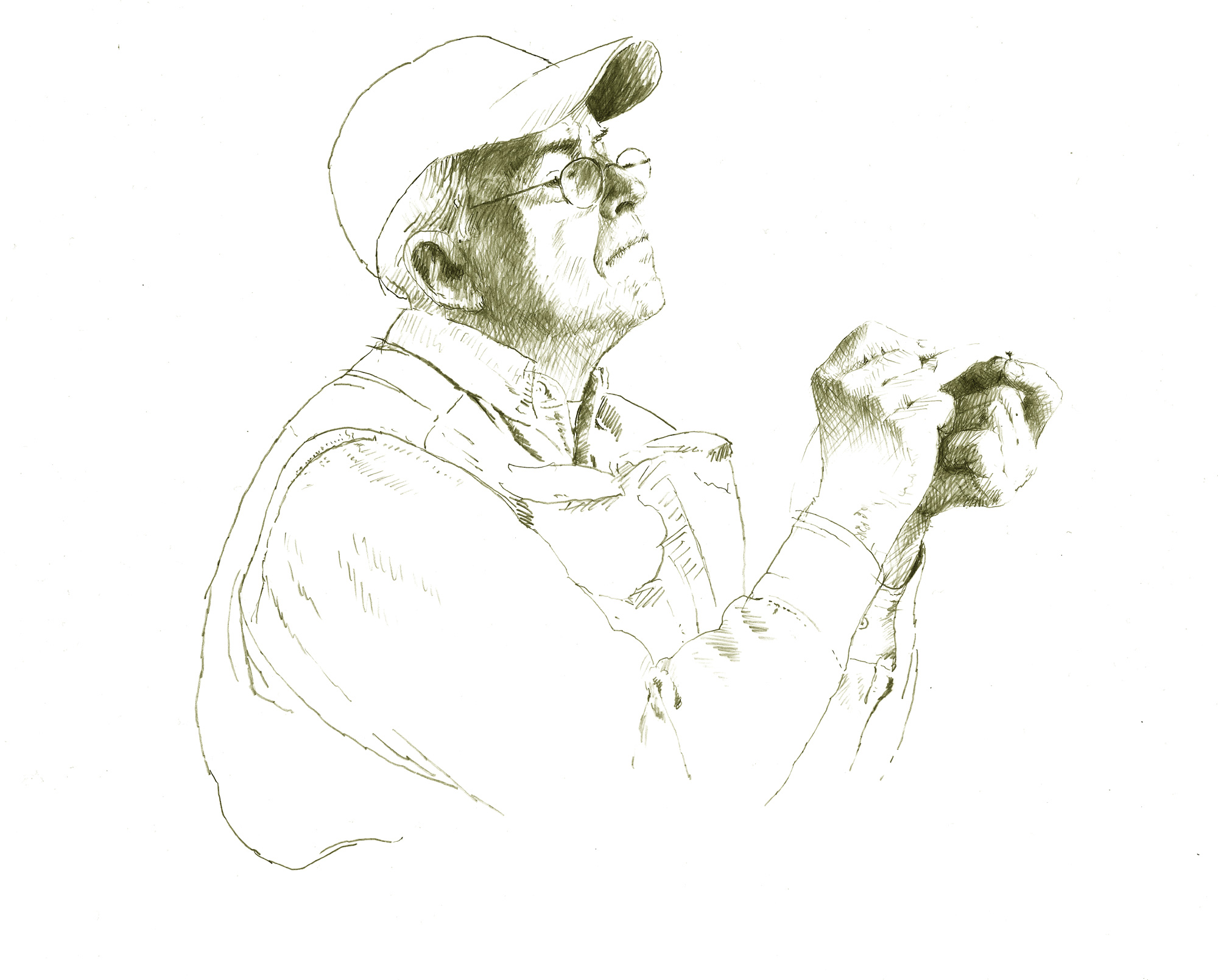 20 Aug Outside: The Art of Fishing with Tricos

in Arts 2010 | Outside | Written by Greg Thomas | Illustrated by Fred Thomas Posted at 19:04h 0 Comments
Share

To this day, my greatest mistake was leaving Ketchum, Idaho, in the mid-1990s after being fired from an editor position and, subsequently, declining an offer to assist one of Sun Valley’s most successful real-estate brokers.

I was young, life seemed long, with so much opportunity to come. It was only later, a dozen years or so, when I started to realize the speed at which time passes and that, despite the clarity of hindsight, you don’t get those chances back.

I think the Sun Valley real estate market would have been good to me and had I gone that route I could see myself standing on a beach in Baja right now, sipping cold ones, gazing at bikinis and waiting for the next roosterfish to pass, instead of sitting in Montana, penning pieces on deadline and watching the snow fall in late May … not that living in Big Sky Country is too difficult.

Fortunately, I don’t regard my angling life with regret — I’ve spent more time casting flies to fish than anyone with a college education really deserves. Which isn’t a surprise to those who know me well; over time, I’ve worked various jobs to stockpile cash and then, as soon as I’ve accumulated a six-month reprieve, I’ve quit those gigs and headed astream to pinch pennies and match the best western hatches, wherever they’ve occurred.

Even when I lived in Sun Valley that was the case, which explains why I was fired in the first place and why I wasn’t eager to begin a new career when the real estate offer arrived.

Timing is everything and that extends to angling. A couple days after termination, I was jobless and happy in Sun Valley with nothing to do except fish. Word was out — Tricos were being seen on Silver Creek. The hitch? You had to get out of bed early, make the half-hour drive from Ketchum to the creek and stake out your spot before 7 a.m.

That wouldn’t be a problem these days, but back then I was running with a posse of fun-loving fly-fishing guides and we took advantage of the Sun Valley scene. If we weren’t playing city-league basketball or hiking or mountain biking or bugling elk, we were pounding schooners and fowl burgers at Grumpy’s or shooting stick and chowing burgers at Lefty’s; other times we were filling up on Mexican and Dos Equis at Desperado’s or KB’s; when I entertained dates or family we hit The Pioneer Saloon for steaks and baked potatoes or The Sawtooth Club for a game or two of backgammon in the bar before heading up for Caesar salads and mesquite grilled scallops. And then there were those summer nights when the flight attendant convention arrived in town and all of them, it seemed, showed up at Whiskeys (RIP) each night. I remember seeing the sun come up a few times and on those days the Trico spinnerfall was someone else’s.

That was OK. Most mornings I got up around 5, tied a few Trico spinners and continued with routine, which meant a stop in Hailey for a Bowl of Soul at Java. I’d be kneeling on the quiet bank, sipping coffee and watching the waterfowl, before 7. The power of the southcentral Idaho desert sun was just being felt and oscillating clouds of Tricos, hundreds of thousands of bugs, danced above me. It didn’t make sense to cast until those spinners hit the water so I took the opportunity to practice Zen, to test the power of meditation. Others are better at that than me because every time my mind almost cleared, I’d hear a slurp and bounce back to reality saying, “Ok here it comes.” A few minutes later I might see the iridescent, silver-fleck flash of Trico wings on the surface, just a bug or two. Soon, a few trout would rise in steady, predictable fashion and then the bugs started falling from the sky as if taken down by a .410 shotgun. Soon, every fish in the creek moved to an advantageous position, which means they bunched up, like a pod of sharks, the best fish harboring the most advantageous positions and the lesser specimens lining up below them for scraps.

When you first see a pod of trout feeding on Tricos it seems like catching one of those fish would be easy. Every half-second to second the same fish breaks the surface, chowing down the next insect in line and there are 10 or 15 other fish doing the same thing in a 5-yard area. How, you might ask, could you possibly cast a reasonable imitation into that fray and not come away with a fish?

The thing is, of all the western hatch mysteries Tricos could be the most difficult to unwind; those bugs are tiny, perhaps smaller than the width of your smallest fingernail, and they land on the water in unbelievable masses, offering trout a plethora from which to choose. The question isn’t how to find willing fish, it’s how to get a trout to eat your fly when the surface is littered with so many naturals, making it difficult for you to find your fly on the water, let alone to detect when a fish falls for your trick. Because Trico imitations are so diminutive anglers fish super wispy tippet, meaning 5X or 6X, sometimes even 7X for the trickiest fish. What does that mean? Once you hook a good fish it’s almost impossible to land it.

To match those Tricos with a perfect imitation representing a single bug always seemed preposterous to me. I opted for a slightly larger imitation than the natural and best yet, a pattern that mimicked a few Tricos stuck together, a cluster, which might make a fish think, “Ah, three in one bite!”

Even with a quality pattern, the Silver Creek Trico game was never easy and I don’t think anyone ever approaches a Trico hatch, no matter where it’s found, to judge a day by numbers. I think a Trico hatch, more so than any other mayfly emergence, is an opportunity for high-minded and confident anglers to regain a sense of modesty, to admit that a trout, nature’s pessimist, can out-duel all the modern equipment, and the most delicate and intricately wrapped fly patterns.