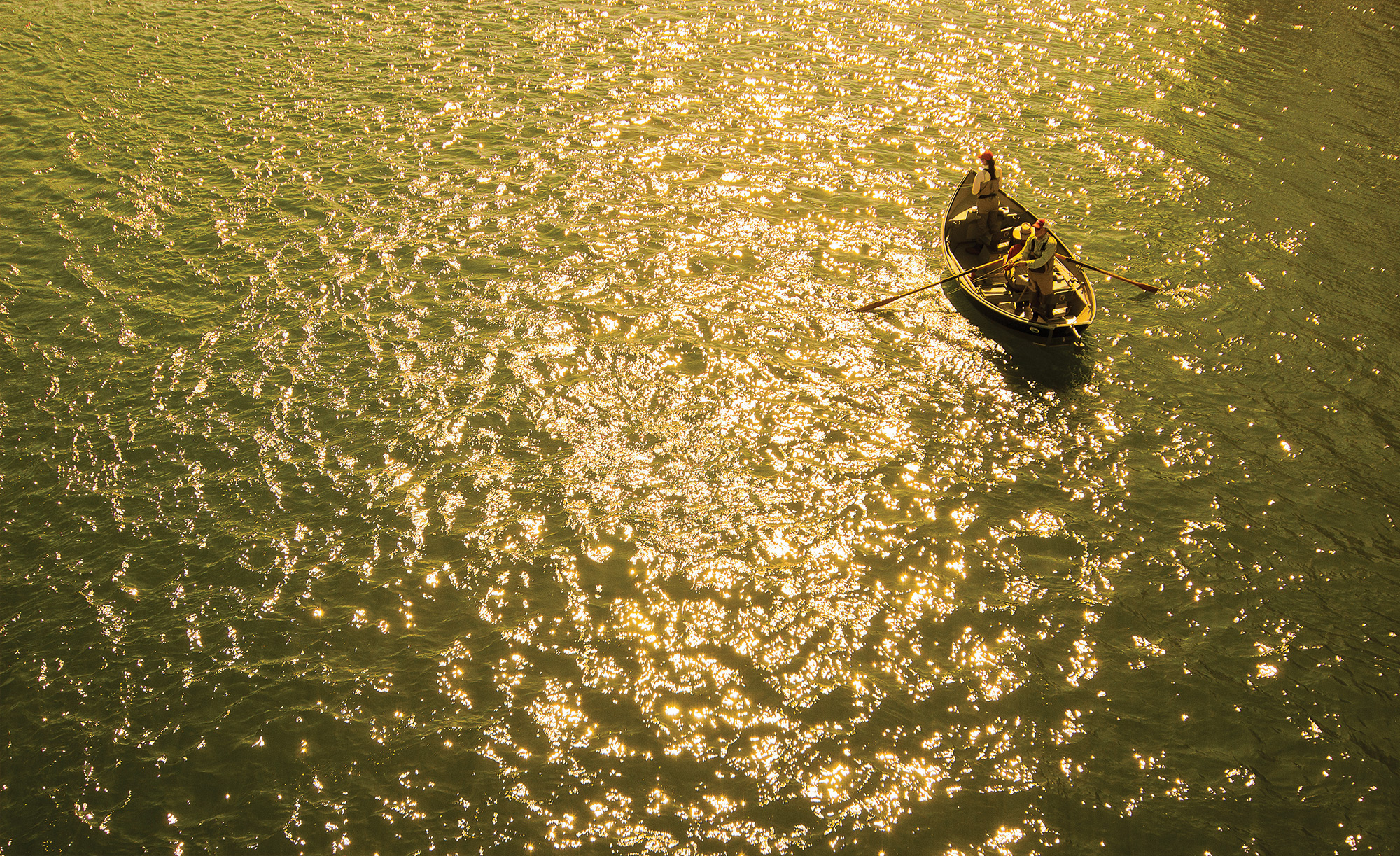 IN RIVERS, THE WATER YOU TOUCH is the last of what has passed and the first of that which is to come; so with present time.

We decide on the Canyon Section of the Snake, just above Palisades Reservoir, because it’s twenty-five miles long and it will take all day to fish and then some. That’s what we want — all day and then some.

“What we don’t want to do is run out of water,” I say. “If we float the long section we might run out of daylight, but we’ll never run out of river.”

It’s a little after 8 a.m. when we arrive at the put-in. There’s a river guide ahead of us, backing a driftboat down the ramp. He’s got two old guys with him. Paying customers. The short one has a white, pencil-thin mustache and a rumpled ballcap. The tall one wears enormous sunglasses, an old-school fishing hat, and he talks continuously, cracking wise with us while we wait.

“Jeeze,” he barks, “would you look at all the food these guys packed?” He points at our provisions and elbows his buddy. “Chips, jerky, lemonade, fruit? How long you gonna be gone?”

My knowledge of the Snake is limited, so I try for a peek at the flies the two old guys have tied on, but they hold their rods with their hands over the hook keepers, as if hiding them.

They look to their guide, who frowns and shakes his head. They really are hiding the flies. The tall guy in the fishing hat shrugs and keeps talking as he clambers into the boat. He wishes us good luck and we hear him prattle on as they drift out of earshot.

The day advances clear and warm, and there is almost no wind. As we slide downstream, towering cottonwoods and jutting formations of basalt loom against the blue sky. With our 6-weights we cast big terrestrials close in to the banks, where there are rainbows, browns and cutthroats — all three — waiting beneath the overhanging grass and branches. Now and then we anchor up on vast gravel bars, where we snack and wet-wade.

Ken rows most of the time but I take a couple turns. Two blisters develop on my right hand. There’s one from casting and one from rowing, meaning I have a lot to learn about both pursuits.

“I have a blister and my blister has a blister,” he says, picking at his palm.

Ken tries to coach us and fish at the same time. He’s more successful at the former than the latter.

“Point the nose of the boat where you don’t want to go,” he tells us. “Aim the stern to where you do want to go. Then, just pull the oars and let the river do the rest.”

He teaches us the language of rowing. Pillows, sweepers, boils, standing waves. He explains how some currents push you away while others pull you in.

We near the end of the Canyon Section. The sun drops out of sight, and the Snake River Valley lies in blue shadow. At the end of the drift I’m on the oars, and I’m beginning to think I’m not half bad, but then I very nearly miss the entrance to the take-out, a blunder that would take an hour or more turn around. When I finally get us paddled in, I nearly clunk into another fellow’s driftboat, which evidently would be only slightly less insulting than feeling up his wife.

Ken kibitzes patiently at me until I somehow collide with the floating dock at the take-out. Even then I bring us in at a weird angle, so when Ken jumps out he barks his shin on the gunwale. We help Ken trailer up his boat and we all get in the truck.

“That was awesome,” says Russ. “Now. Where is the nearest steakhouse?”

In the dark we drive to a bar where the river guides hang out. The parking lot is full of trucks and driftboats on trailers and not much else. We speculate on how many fights have likely gone down there.

“Technically, I don’t think we’re done here until one of us gets a couple teeth knocked out,” I joke.

Inside, the place is noisy with grizzled, dark-tanned guys in ballcaps and sunvisors. They mill at the bar and holler for more beer. On the woodpaneled walls hang dusty creels and fly rods. A petite blonde waitress of about 30 races around like a gerbil.

“Steve, I told you I’ll bring you another one when I come back around,” she snaps over her shoulder as she zooms past.

Steve replies with something mildly suggestive.

When she finally makes it to our table, the first thing she says is, “I’m out of the specials.”

She also tells us the kitchen is no longer serving chicken sandwiches, nachos, tacos or mussels. Why anyone would come to a place like this to eat tacos and mussels is not explained. We order some burgers.

As we wait for the food, I’m overcome by a disconnected sensation, as though I am in two places at once. It is not a wholly unpleasant condition, but in that moment I can’t put a name to it. Russ does it for me.

“I feel like we’re still on the water,” he says, running an uneasy hand over his face.

Right. That’s what it is. When I close my eyes, I’m still rocking and bobbing in Ken’s boat. And on the insides of my eyelids I see a reverse image of the sun scattered and sparkling on the surface of the Snake River.

“Well, we were floating for almost twelve hours,” says Ken.

We nod slowly and rub our eyes. Even in the high-tech fiberglass driftboat we are terrestrials adrift, and the current pulls us long after we’ve walked up onto the land. There were shorter river sections we might have floated, but we chose the Canyon Section because it’s 25 miles of river and we knew it would take a long time.

And that’s what we came in search of — time. We found a single moment between what had passed and what was to come, and the river did the rest.

Editor’s Note: Excerpted from a collection of essays to be published by the History Press, June 2015. 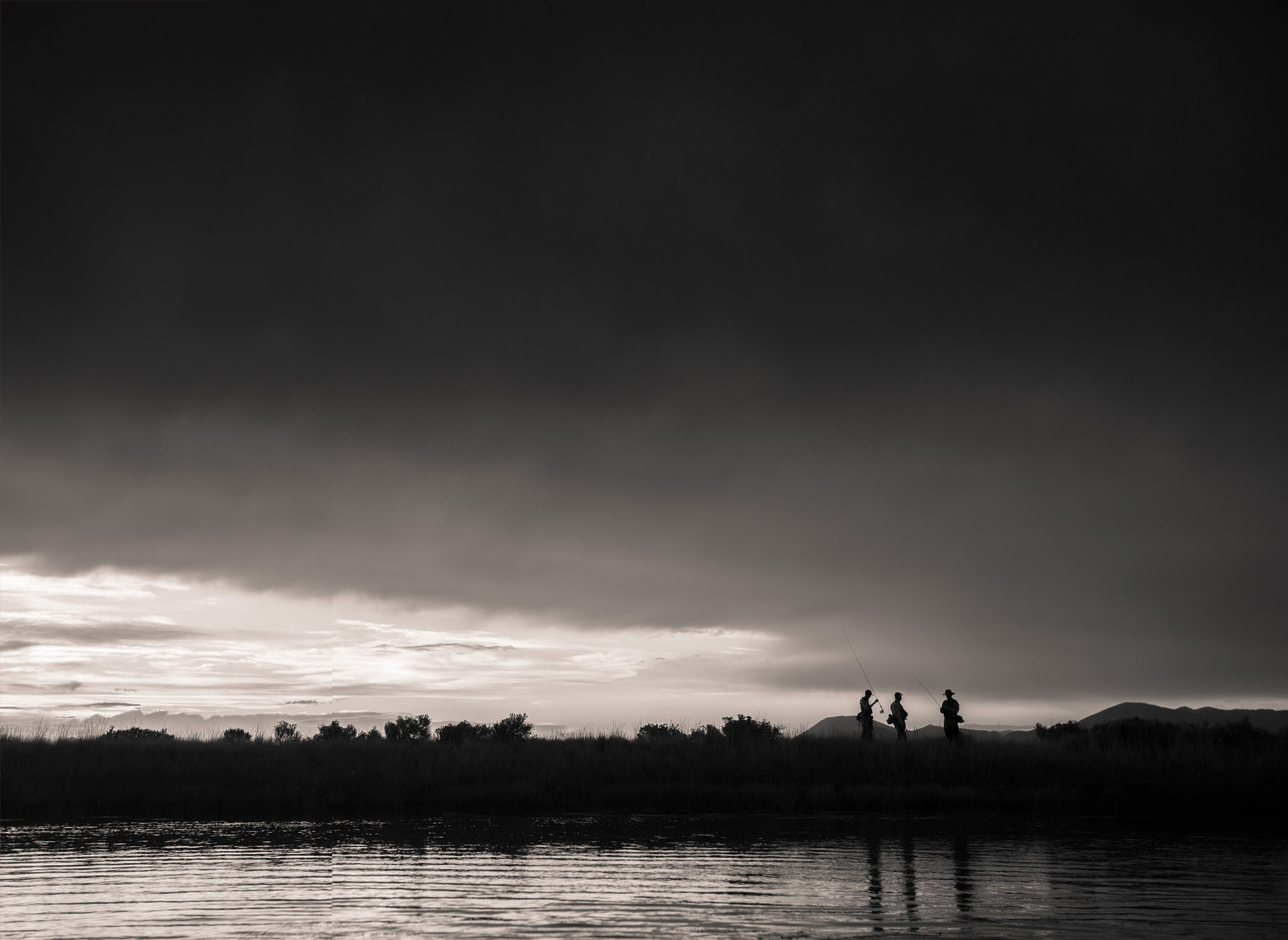