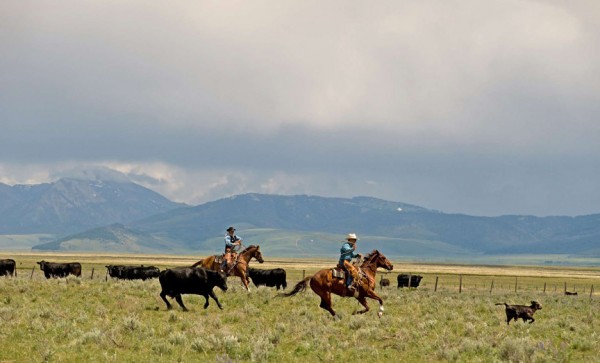 JEROME CONGRESS WANTED TO HAVE SOME QUALITY bonding time with his son before the teenager went off to school in Canada. The New York lawyer could have gone anywhere in the world, and indeed in vacations past the family had set off to exotic global destinations. He decided to take his 17-year-old, Adam Cohen-Congress, to a working cattle ranch “pretty much in the middle of American nowhere,” he says, based on a desire to have their fleeting time together “be real.”

And so, on a resplendent morning in late August, the Congress men are on horseback, helping real Montana cowboys gently drive a herd of cattle from one pasture to the next. Off in the distance, pronghorn dart across the flats of Red Rock Lakes National Wildlife Refuge. Soaring overhead, a red-tailed hawk stalks voles on the ground. A mile away, dwarfed by mountains in the background, the wandering course of Red Rock Creek swings in front of a rustic homestead cabin. The scene resembles a Romantic 19th century painting.

Here, in gorgeous Centennial Valley — one of the most remote and wildest corners of Big Sky country — these guests of the J Bar L Ranch glimpse a simpler past. It’s part of a growing phenomenon involving people who are seeking “value-added” getaways in the West. The sojourns not only enable travelers to experience rare, remarkable places far removed from the grind of industrial-strength tourism, but their very involvement gives them the satisfaction of knowing they’re helping to preserve both landscape and heritage.

Riding stoic in the saddle, Congress steers his steed in front of an Angus calf and turns it back toward the herd. He smiles when one of the resident wranglers informs him that he looks like a pro — a marvel considering that just a few days prior the 72-year-old was sitting in his Manhattan office and had never cowboyed before in his life.

The name, Peggy Dulany, owner of the J Bar L for more than a decade, might not ring a bell for some rural Westerners. But growing up as a member of the Rockefeller clan, her family roots stretch back into the firmament of the American gilded age. Her father is David Rockefeller, son of the venerable oilman John D. Rockefeller Jr.

Dulany is not one to flaunt her bloodline. She’s self-deprecating and sincere. All her life, she was raised on the premise that “to whom much is given, much is expected in return.” Internationally, she’s made a name for herself by toiling to combat hunger and poverty in developing nations. She keenly understands the connection between healthy economies and healthy environments.

Having spent summers at the Rockefeller family’s historic JY Ranch in Jackson Hole — the spread recently was bequeathed to American citizens and today is an extension of Grand Teton National Park — she has an affinity for agrarians in the West. Her grandfather, John D. Rockefeller Jr., was instrumental in securing the land that created Grand Teton as it exists today and the family has protected wildlands in Maine, the Virgin Islands and Hawaii.

Dulany is hands on in her own attachment to nature. As the 20th century was drawing to a close, a friend took her on a long drive through the Centennial Valley and she was instantly smitten. She bought the J Bar L as a cattle ranch and gave much thought as to what kind of operation she wanted it to be. Realizing it could serve as an example of how sustainable conservation can be applied, she believes that wise stewardship can pay for itself. She handed Bryan Ulring, her ranch manager, the charge of finding innovative ways to achieve sustainability. Subsequently, the unique approach has attracted a lot of attention, including write-ups in The New York Times.

“I want it to be a place where eyes and minds are opened, and people can learn,” Dulany says. “I hope that when our guests leave, they are more inspired than when they arrived.”

The idea of operating the J Bar L as a working guest ranch where visitors pay about $400 a day to get a taste of the wild West continues to evolve. There is a long list of satisfied clients, including honeymooners and those interested in one-of-a-kind family reunions, groups from across the country that have come on retreats and team-building exercises, and, more often, folks like the Congresses who want adventure with rustic style. It may take a few days to settle in if one is coming from a city, Ulring says, but once it happens, guests feel transported into another frame of mind. And indeed, the Centennial Valley east of Lima IS another place.

With the Red Rocks Refuge forming its scenic heart, the massive dell is home to only a handful of large cattle operations. Some, like the J Bar L, have placed conservation easements on their property through The Nature Conservancy, ensuring the scenic corridor will never be cluttered with residential communities and scattershot trophy homes.

Bill Bryan, known worldwide for turning customized vacations into an art form, loves sending travelers to the J Bar L. It just so happens and he and his wife, Pam, live in Bozeman and were co-founders of travel planner, Off The Beaten Path, more than 20 years ago.

“People have a yearning to make a connection with the land,” he says. “Agricultural tourism in the West was born of the notion that people want authenticity. We receive a lot of inquiries from people who are coming to the Rockies or High Plains and they want to have an authentic experience. They want to come in contact with real people of the region, and get to know a real place, and to even understand where their food comes from. One of the things, among many, that is really different about the J Bar L is that it meets all of those criteria.”

As Bryan notes, there also aren’t many pristine valleys like the Centennial left in West. If ranches in the Old West were based on conquering nature or at least subduing it into obliging submission, then the J Bar L could be considered an alternative to that paradigm of production agriculture, he says. And, if ever there was an ideal setting for the premise to be tested, then this is it.

By dint of location, the Centennial is a crossroads for wildlife. Red Rocks was specifically established nearly a century ago to help protect trumpeter swans from extinction and it is a mecca for birders. But there also are grizzlies, wolves, elk, moose, pronghorn and deer moving across a peneplain that once held large numbers of bison. The landscape and its plant community evolved with major grazers eating the grass. In the absence of buffalo, Ulring says, carefully managed cattle herds can achieve the same ecological effects. Moreover, livestock are safeguarded to prevent run-ins with bruins and lobos, and if any cows are lost to the predators, it’s considered a cost of doing business rather than grounds for a call to have the wildlife killed or removed.

With Dulany’s enthusiastic support, the aim is managing the J Bar L with attention to “the triple bottom line” — that three-legged stool of sustainability that weighs economic, environmental, and social values on the ledger sheet. It’s against this backdrop, of promoting co-existence between nature and humans that guests at the J Bar L enter the scene.

“The foundation of everything begins at the land level. When you manage to achieve maximum impact for only a single species that’s when things get out of whack,” Ulring says during a horseback ride. “We are managing to achieve the biggest, most diverse salad bar of plant life we can offer.”

After a long afternoon in the outback, the Congresses have showered up and are at the main dining lodge snacking on hors d’oeuvres. Tonight, for dinner, guests will feast on juicy tenderloins, New York strip steaks and ribeyes that were literally raised in the backyard. It’s a little more complicated than simply saying — “eat a steak, help save a grizzly or wolf” but that’s pretty much the gist.

Over conversation at the long banquet table, guests hear Ulring tell stories of how attitudes toward ranching have shifted. J Bar L is part of a novel ranching cooperative that sells locally grown beef under the brand, “Yellowstone Grassfed.” The intent is to offer consumers the ability to vote for conservation with their wallets.

By paying a little more for beef — just 10-15 cents more per pound — they get flavorful cuts of meat that are high in healthful Omega 3 fats and the solace of knowing where the animals were raised. In terms of its growing appeal, Yellowstone Grassfed possesses the same kind of allure as wild Alaskan salmon harvested from the Pacific Ocean with sustainability in mind. J Bar L guests can purchase boxes of steaks to take home with them, find choice cuts offered on the menu of gourmet restaurants in Bozeman or directly at www.yellowstonegrassfedbeef.com.

So many traditional dude ranches are programmatic and oriented toward guests following a well-oiled script that makes them feel manipulated, Bryan says. But at the J Bar L, there are options. With Ulring and his staff, visitors can delve as deeply into the nuances of working ranch life as they like and return to the main lodge for dinner at the end of the day. Horseback riding is the major draw and each guest is matched with an animal that matches their level of equestrian experience — greenhorns fear not!

Or, if guests wish, they can simply relax. Wildlife photographers and plein air painters have used the J Bar L as a basecamp for undertaking their own nature safaris. Those wanting to trek can day hike in the surrounding mountains, enlist a guide to fly fish blue ribbon trout streams in the area or pour themselves into the novel that has evaded them in their other life.

Before guests retire to bed, Ulring encourages them to open their windows and listen to yipping coyotes, or step outside and stand beneath the incredible star-filled night skies, experiencing a valley devoid of yard lights. “The stars are as clear now as they were to native people who came through 10,000 years ago at the end of the Pleistocene,” he says.

For Jerome and Adam Congress, the steaks filled them up but it was the ranch itself that delivered sustenance. “It’s amazing what you can learn from riding a horse,” Adam says. “You see so many things that you never knew were there. It’s the real West.” 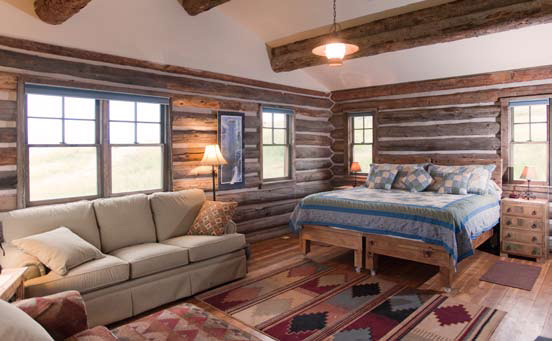 The Brundage Cabins are rustically cozy and full of quiet ambiance. 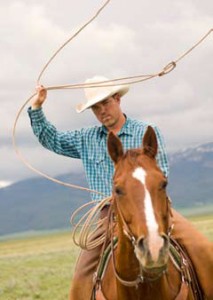 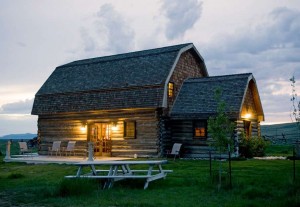 The J Bar L’s main lodge, fashioned of old hand-sawed timbers, is a welcoming gathering place where guests plan the next day, keep their eyes open for pronghorn on adjacent Red Rock Lakes National Wildlife Refuge and soak in sunsets worthy of a landscape painting. 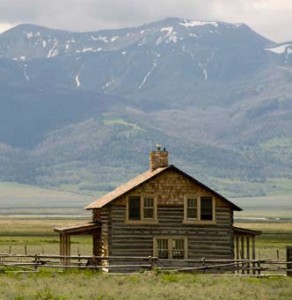 Anderson House, one of the original ranch homesteads, speaks to days gone by and affords guests million dollar views, clear glimpses of the mountains and night skies, and the sonic vocalizations of coyotes. 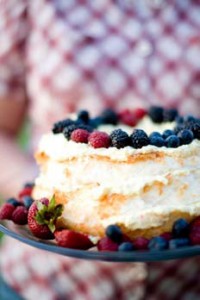 A homemade dessert from the J Bar L Ranch. 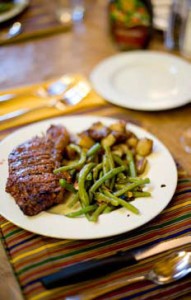 Each day ends with a savory dinner.