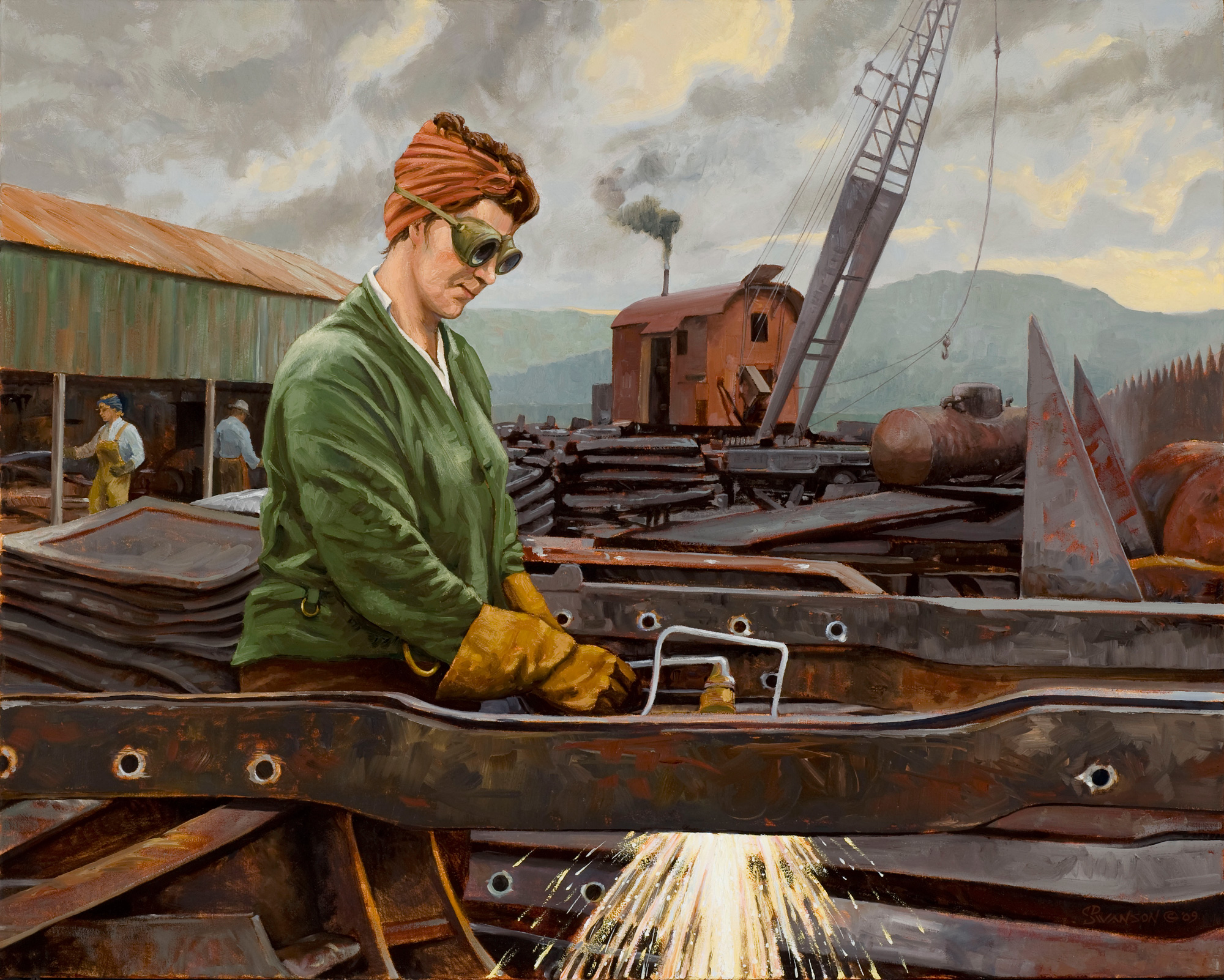 23 Jul Artist of the West: Sweat and Steel

In general it can be said that a nation’s art is greatest when it most reflects the character of its people.

SUNLIGHT POURS IN THROUGH THE OLD Lincoln School windows, buttering the uneven wood floor with intent. Standing where a teacher once stood, painter David Swanson works on a large canvas, an addendum to his series Sweat and Steel, an 18-piece show traveling around Montana over the next two years as part of the Museum and Art Gallery Directors’ Association (MAGDA) program.

Fascinated with both the cultural and iconic machinery often found in the landscape, Swanson began this series thinking about the importance of the railroads to development in the West, as well as the people who continue to work the rails.

“I’ve always been intrigued by the organic within the mechanistic elements of a place,” he says, mixing a dark violet glaze on one of his two palettes. “I wanted to put a figure into that environment, being intrigued by the curvilinear form of the figure, and I wanted to expand and explore that concept.”

Around the same time, Swanson was taking a photography class and had an assignment to emulate a photographer — he chose Dorothea Lange, a photographer known for her documentation of American life during the Depression — and found himself exploring the Livingston Montana Rail Links work yard and depot.

“When I saw the size of these machines, the photographs I took became the basis for this series,” Swanson says, scooping up the small bit of purple shade and placing it on his hand-held palette. He gets up close to the large painting, dabbing small areas of the landscape in the background of the piece titled, Train Spotting Montana Style, a 72- by 102-inch painting of three young people in an old red pickup truck waving to the passing engine at an uncontrolled railroad crossing. The amount of detail expressed by Swanson’s careful hand transports the viewer from the studio to the shaking and rumbling gravel road.

In the process of exploring black and white photography, Swanson also found himself developing an emotional palette.

“That was very informative,” he says, grabbing a nearby rag and cleaning a smudge off a brushstroke. “The railroad was so important to the settlement of the West and of these areas specifically, rather than make a qualitative judgment — whether it should’ve happened — I just wanted to acknowledge that it did happen.”

But his series is more than a documentation of railroad workers, each piece tells a story: the brakeman in a blizzard; the inspector, singular, gritty and smoothed; the yardman ambling along the tracks in long afternoon shadows. More than a glimpse into the genre of Americana, there is a narrative that moves beyond the edges of the canvas.

Bob Ebinger, President of the Livingston Center for Art and Culture, admires Swanson’s ability to respect as well as reflect on the history of the land.

“He’s shown at LCAC,” Ebinger says. “He’s on our board and teaches classes here. We’ve enjoyed his work because it shows a slice of Americana. He’s got a great ballpark oil painting that really captures the feeling of living in a small town. His railroad paintings are bold and dynamic, very profound images of men at work.”

Swanson doesn’t romanticize the men and women of the railroads but instead honors those people who had, and still have, those professions.

“The really wonderful ones I’ve seen seem to completely embody the whole image that you have in your mind of life in rural America,” Ebinger says. “It could be the America we long for again, but it still reflects the values of the West.”

On the walls of his studio, Swanson’s paintings of diners and old style gas stations, empty streets and lonely roads hang like penmanship banners or guides to the fundamentals. But Swanson’s work — constantly evolving, moving forward along with his ability to question himself — marks him as a perpetual student … continuously looking for the next lesson.

“I guess my art heroes are Hopper, Monet and Kandinsky,” Swanson says, dipping his brush carefully toward the landscape in his painting. “Kandinsky because he was a great philosophical thinker on the what, why and way he talks about Abstract art; Hopper because his work was so important to American art as a Modernist; and Monet because of his brushstrokes.”

The artist’s mark is apparent in Swanson’s work as well.

Although Swanson’s pieces tend to the larger side, each area within the piece is a lesson in brushstroke and color. Stand on one side, and the angle underscores a montage of light and dark, of reflection and refraction — like a collection of color field studies — constantly engaging and pulling the viewer deeper into the piece.

“I enjoy taking something and creating visions of objects in space and have them doing what I want them to do — so there’s an illustrative quality to my work,” he says, standing back to look at the undulating hillsides he’s been working on. “The fun part is the idea — the thumbnail sketches — and when I’m finally putting paint to the surface it really becomes ecstatic.”

Museum Director Diana Seider of The Livingston Depot Museum helped Swanson get the grants that enabled the show to travel around the state.

“We developed the idea and it’s gotten several MAGDA bookings but it’s also traveling independent of MAGDA as well to several other museums throughout Montana,” Seider says. “I was drawn to the work because of its contemporary yet historic view of railroading. Railroads are still important to the people of Montana and especially in Livingston, where it’s a real link to our past and our present.”

Besides the MAGDA grant, Swanson’s work garnered money from the Montana Arts Council, the Altria Group, Inc., and a new donation from Betty Lahren in memorial to her husband, Al Lahren, a longtime Northern Pacific Railroad employee.

“We’re a very small museum and for us to have the ability to travel a show means a lot … for us to get the grant support is quite significant,” Seider says. “And the fact that it will also go to other small museums that are located on railroad lines is really what it’s all about, preserving the heritage of railroading in Montana.”

Adding to the overall feeling of the railroads, Swanson’s work does lend itself to the type of homage to heroic Realism but what speaks loudest in Swanson’s paintings is his compassion and empathy with the struggles of man and his partner the machine.

“His style of work is very reminiscent of the WPA years, that style of the human effort involved in the work,” Seider says. “His paintings present the human element and the machine element side by side. It gives you a sense of scale of the work involved. When we see the contemporary track maintenance crews, there’s a lot of automation but there’s still work that has to be done by humans with the same kinds of tools we have here in the museum. And Swanson’s paintings show that.”

Editor’s Note: Swanson’s Sweat and Steel show premiered at the Livingston Depot Center. From there it will travel to the Custer County Art & Heritage Center in Miles City, then to MonDak Heritage Center in Sidney, the Jefferson County Museum in Clancy, the Copper Village Museum & Arts Center in Anaconda, then to Central Montana Museum in Lewistown next summer, the Holter Museum of Art in Helena next fall and finally at Kalispell’s Hockaday Museum in 2012. For details go to www.davidswansonart.com. 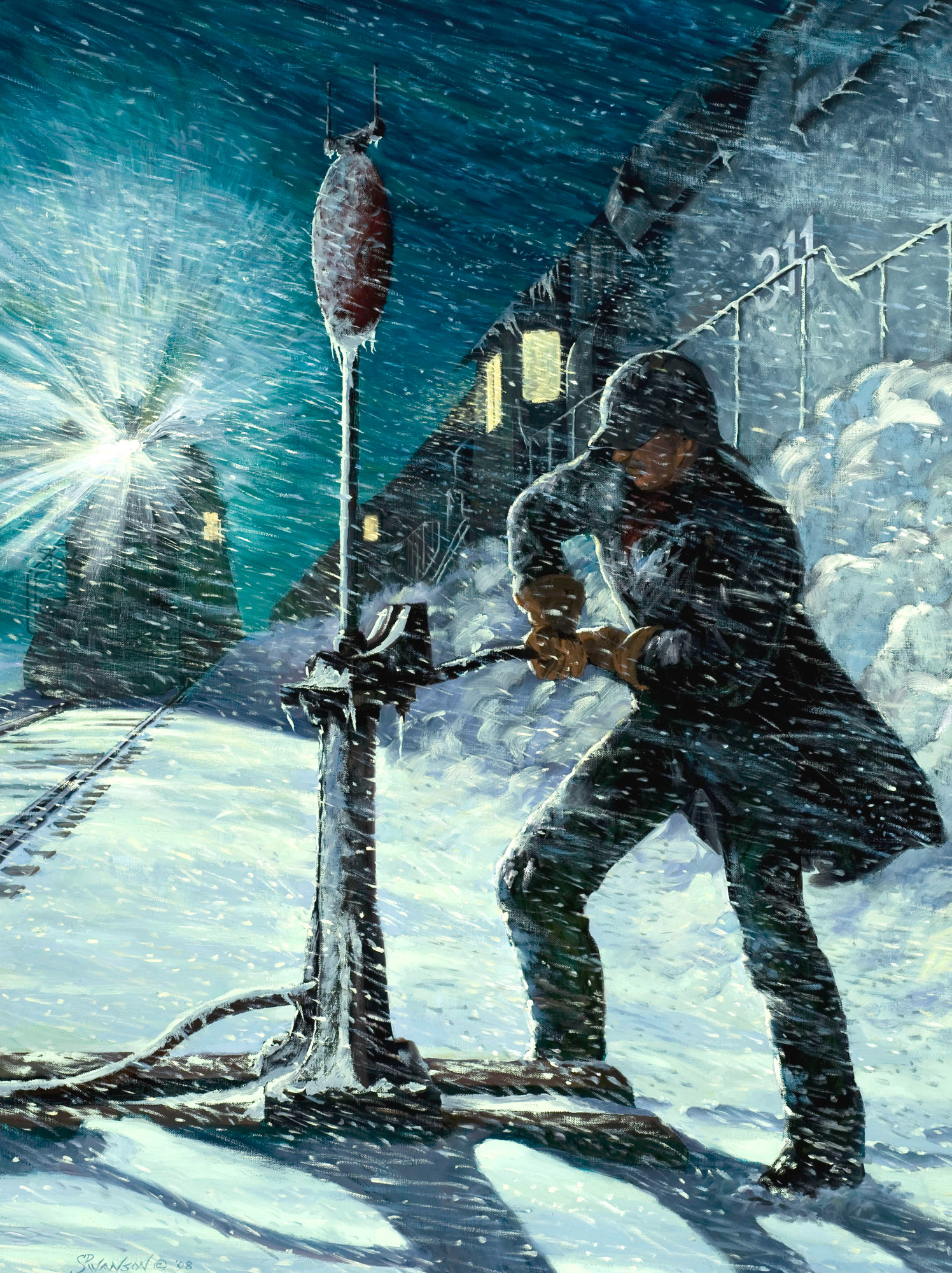 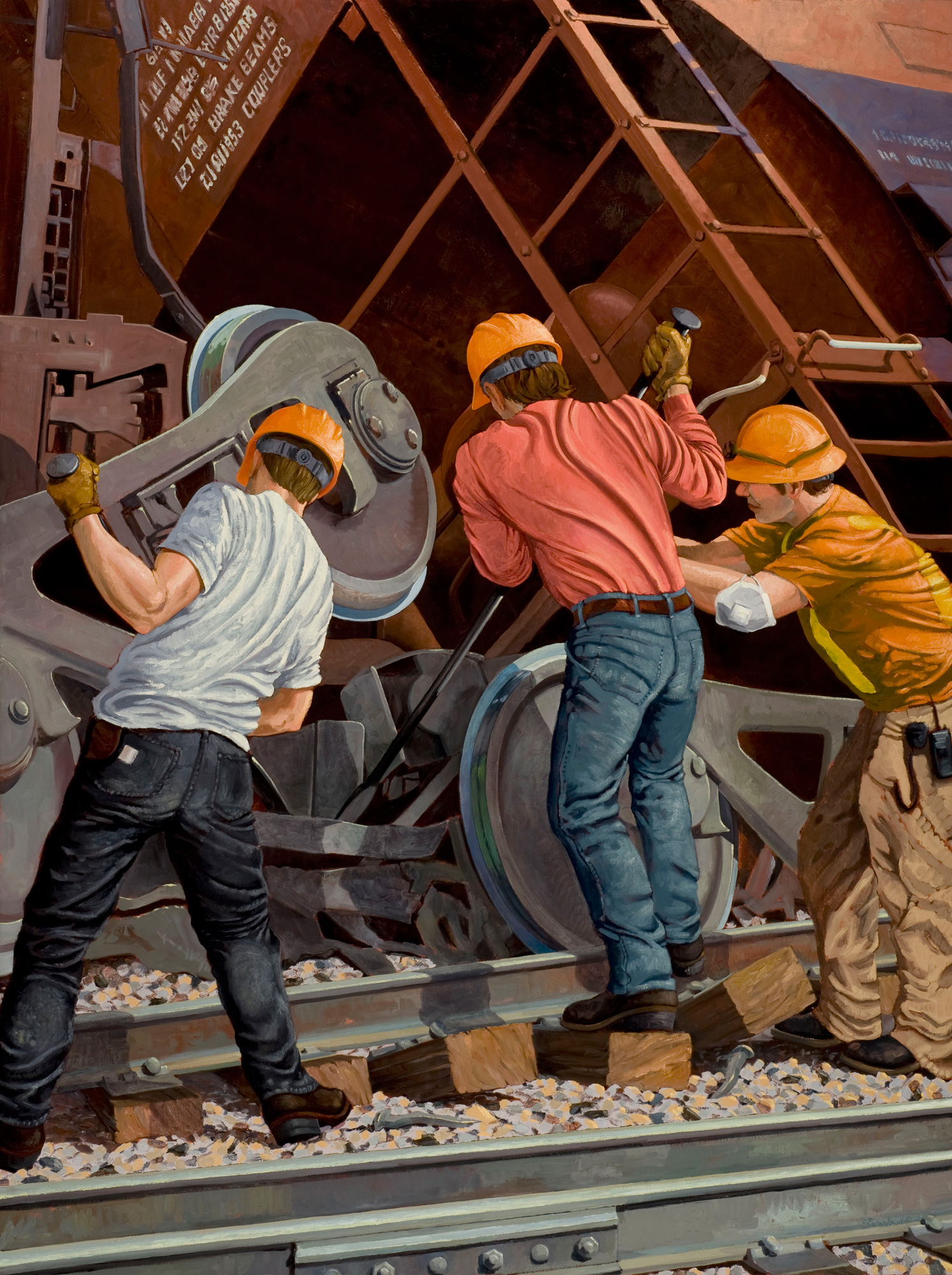 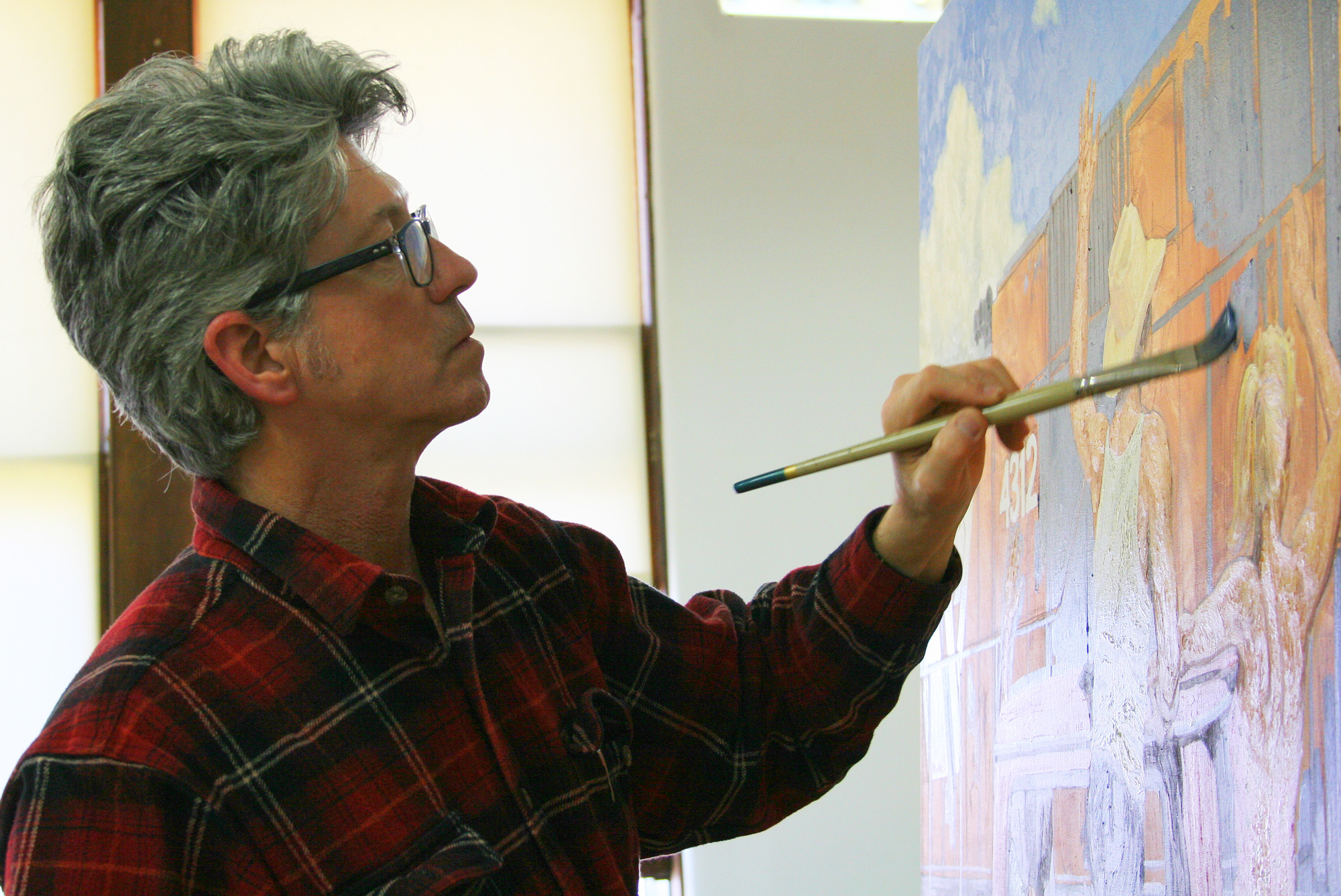