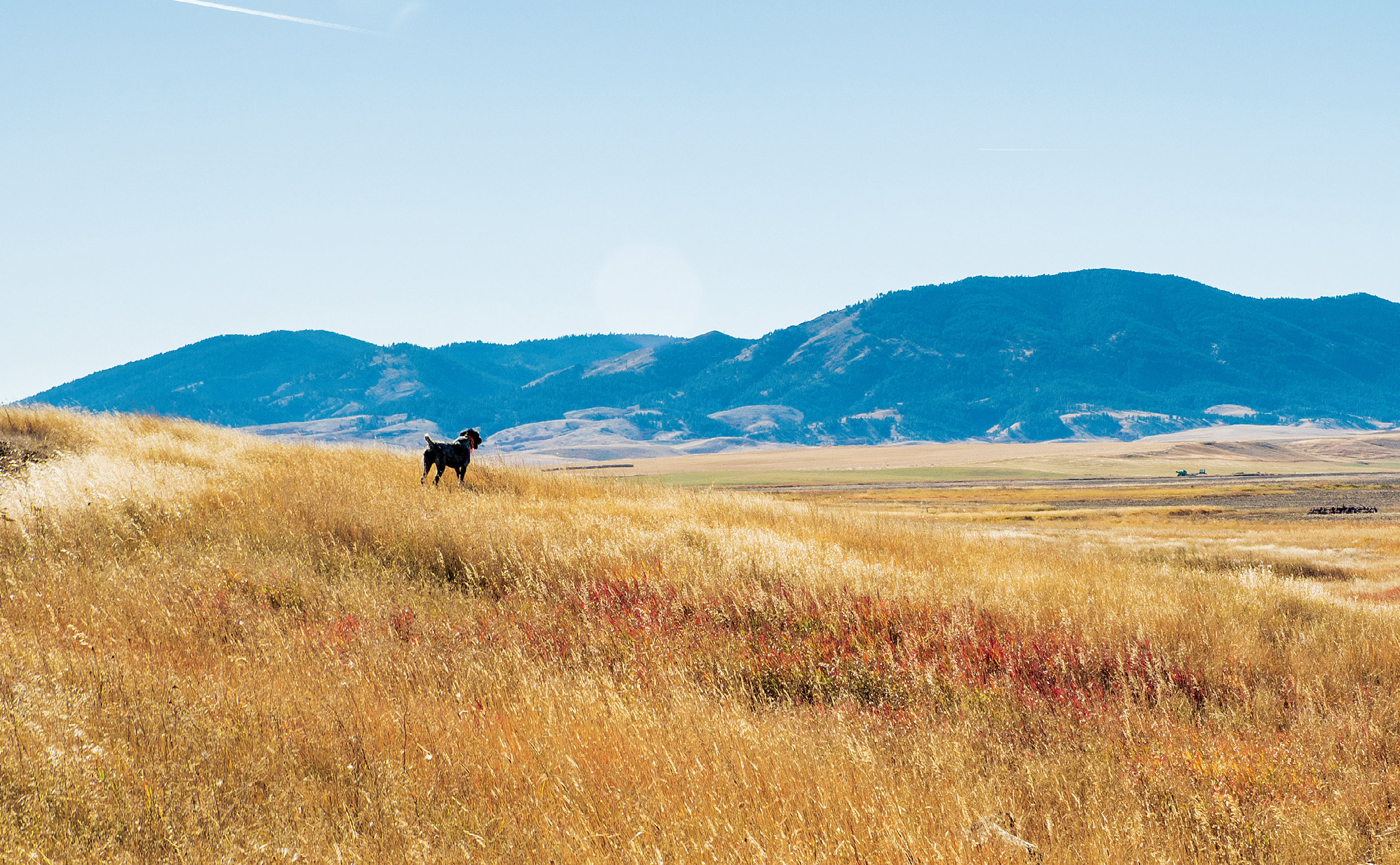 16 Oct Strangers in a Strange Land

SEPTEMBER IS A MONTH of transition here on Central Montana’s high plains, often beginning with temperatures that near triple digits and ending with a cold front that reminds us of winter yet to come. This particular year, the first storm of the season had arrived on schedule, leaving the mountaintops dusted in snow and a rim of ice around the pond below our rural home. I didn’t protest despite the lingering chill. After laboring in the heat for three weeks, Max and Maggie, our German wirehair pointers, deserved improved scenting conditions and days in the field that lasted beyond midmorning. So did my wife Lori and I. 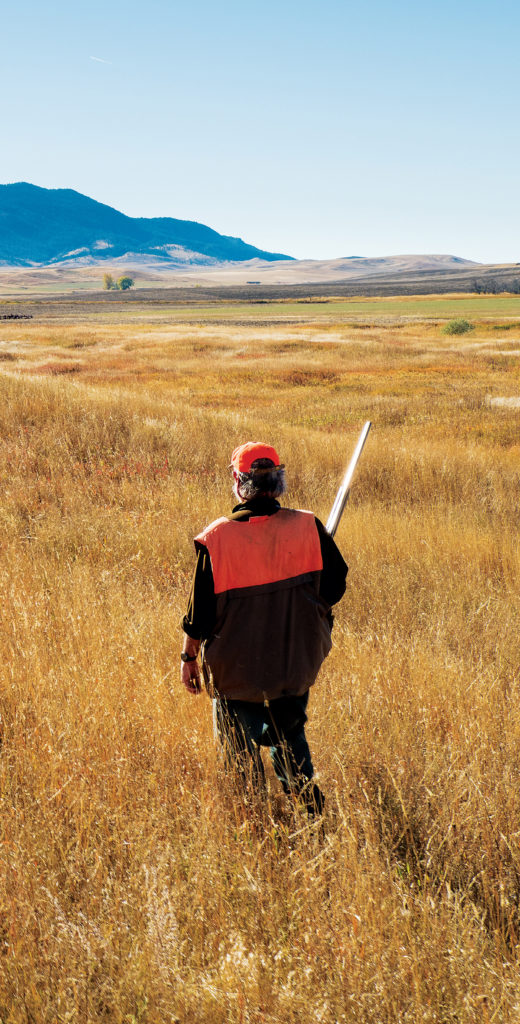 Max, the writer’s German wirehair pointer, is on point in Montana Hun habitat. Properly known as gray partridge, these birds originated half a world away in Central Asia.

The snowline had retreated a thousand feet above our friends’ ranch where we planned to hunt that day, but the grass no longer crackled underfoot and looked less like rattlesnake habitat than it had the week before. The dogs seemed to sense the change as they leapt out of the back of the truck and began acting like kids released from the last day of school before summer vacation. Despite the crisp feel of the air, Lori and I each placed water bottles into the backs of our game vests, for the front had passed and I anticipated rising temperatures ahead.

Neither of us loaded our 20-gauges before we set off along the flanks of the first coulee, for the essence of hunting upland game birds with pointing dogs is the pointing rather than the shooting. The dogs would provide us with plenty of opportunities to prepare when the time came, and I was more interested in their performance than my own. As much as I love to shoot, cook, and eat wild game, the dogs had become the focus of my days afield years earlier. 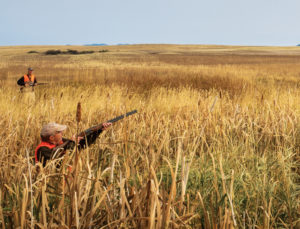 A pheasant explodes from a dense tangle of cattails after a point by Maggie, the writer’s other German wirehair pointer.

We climbed pleasantly for a half mile before Maggie hit the brakes and Max piled up behind her to honor the point. Lori and I each dropped a pair of shells into our shotguns’ chambers and hustled eagerly ahead. But what were they pointing? We had taken a variety of upland game from this cover during previous seasons. I expected to flush a group of sharptails, given our proximity to a cluster of buffaloberry where prairie grouse love to shelter during storms.

Hence, the modest but pleasant surprise I felt when my assumption proved incorrect. Anticipating naïve early-season sharptails at close range, I was half a beat behind the Hun covey’s explosive rise. As Huns often do when they first flush, the birds rose from the grass at the outer edge of shotgun range. While Lori and I each dropped one with our first barrel, they were beyond our reach before we could fire a second. But each dog had a bird to retrieve, and I was able to mark the covey accurately when it settled back to ground on the far side of the coulee. Hopefully, they would hold a little tighter when the dogs located them for the second time. 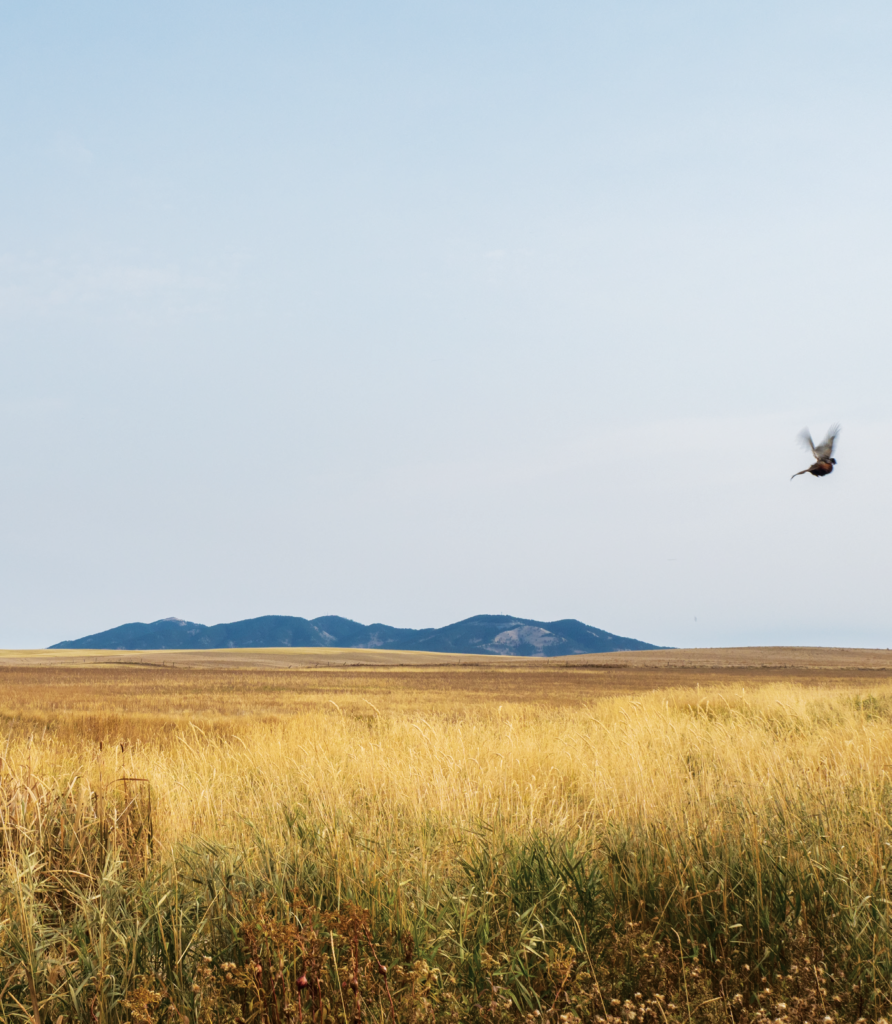 Present in both sexes, a Hun’s rufous tail feathers are visible in flight, even from a distance.

The journals of Lewis and Clark provide amazingly accurate accounts of the wildlife they encountered during their long, arduous trek from Missouri to the Pacific and back, including the first scientific descriptions of such important prairie game birds as sharptails and sage grouse. However, mention of two of my favorite upland species is notably absent from those records, simply because Hungarian partridge and ring-necked pheasants had not yet arrived from their original Old World homes. Given their role in our autumn hunting seasons today, it’s sometimes hard to remember that neither of these great game birds is native to Montana.

While properly called gray partridge, Perdix perdix are almost universally known among Montana hunters as Hungarian partridge, or simply Huns. The allusion to Hungary as their home of origin is misleading, since their native range actually extends east from the Iberian Peninsula and Scandinavia to the Central Asian steppe. Attempts to introduce them in the U.S. began as early as the 1790s, with initially disappointing results on the Eastern Seaboard. They fared better in Western prairie habitat a hundred years later, and I have personally hunted them in Washington, Oregon, Idaho, and Alberta as well as Montana, where Hun populations are largely derived from Canadian birds that crossed the border under their own power years ago. 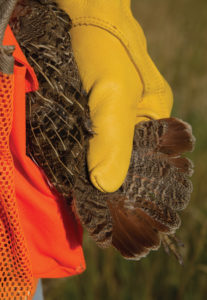 It’s easier to be precise about the origins of our second imported Eurasian game bird, the ring-necked pheasant. (Actually, Montana upland regulations reference a third, the chukar. While I have hunted them extensively in the Northwest, I’m ignoring them here because during five decades of Montana upland hunting, I have seen exactly one covey of chukar, and I think they landed in Wyoming after they flushed.)
Between 1881 and 1884, Judge Owen Denny, then the American Consul in Shanghai, imported several batches of Chinese pheasants to Oregon, where they eventually established self-sustaining populations in the Willamette Valley. They worked their own way eastward across the plains from there, aided by transplants at various locations around the Midwest.

Today, they are America’s most popular upland game bird. While some states still supplement their pheasant populations by releasing pen-reared birds, Montana pheasants are essentially all wild. The distinction is important. Artificially raised pheasants offer little challenge to experienced hunters and largely wind up as a food source for predators, while wild ring-necks, noted for their exceptional wile and toughness, rank among the most demanding upland quarries in the country.

While Huns and pheasants have enriched my life here in Montana, as a scientist and conservationist as well as a hunter, I have to wonder about the ecological cost of their introduction. After all, carp, Russian olive trees, starlings, and spotted knapweed, among others, were all brought here from the Old World with the best of intentions, only to be followed by regret. However, it’s hard to identify any native species significantly displaced by these introduced game birds.

Montana’s landscape has changed profoundly since Lewis and Clark passed through. Those changes include the development of large-scale grain farming, providing an important food source that Huns and pheasants utilize more efficiently than our native grouse. We have created, or at least supplemented, the habitat niche these imports occupy today. Granted, the principal difference between Huns and pheasants (among other welcome newcomers like brown trout) and “alien invasive” species is that people like them — a shaky rationale for bringing any plant, bird, or animal to a new home where it may do more harm than good.

I’ll take these two immigrant game birds though, while admitting that my motivation is influenced by the enjoyment they provide in the field and on the table. 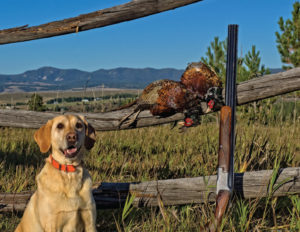 No wounded bird is more difficult to recover than a ring-necked pheasant.  An experienced Lab, like Rosy pictured here, can be a great asset on a pheasant hunt.

Sometimes the satisfaction of good dog work and the excitement of fast shooting can disguise the most fundamental reason for hunting in the first place: putting wild game on the table. Almost all of Montana’s upland game bird species provide fine dining with the possible exception of the sage grouse, one of several reasons why I haven’t killed one in years. Even by these high standards, Huns and pheasants are outstanding. If I had to, I’d hunt them for no other reason than to cook and eat them.

The meat of both species is light and delicate, making them ideal for dinners involving non-hunters who have yet to acquire a taste for “gamier” (a term I detest) sharptails and waterfowl. The only drawback to Huns is their small size — I can go through two or three of them in one sitting after a long day in the field, while a single pheasant will satisfy a similar appetite.

This is not the place for recipes and detailed discussions of game cookery, but a few basic principles deserve mention. As with most game, the easiest way to ruin a good bird is by overcooking it. Because of their low fat content, wild birds dry out quickly as they cook, a peril best addressed by frequent basting and shorter cooking times.

While hanging game is controversial, I’m a firm believer. In suitable weather I hang my birds for at least a week, a process that increases flavor and tenderness. While I believe in eating all of what I shoot, pheasant legs are just too tough to gnaw through. Instead of trying, I simmer them down into stock, which makes a wonderful base for rice or sauces. Since Huns don’t run as hard as pheasants, their legs are tender and delicious, although there isn’t much to them. 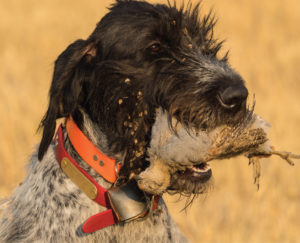 Max is covered with burrs when he shows up with a newly-retrieved Hun.

Spening day is a magical waypoint in any hunting season, widely anticipated among hunters the way children anticipate the annual assault on presents under the Christmas tree. In the case of Montana pheasants, the October opening day and the week that follows offer an opportunity to hunt uneducated birds during pleasant weather, and I can’t pretend I don’t enjoy some easy limits. However, December is my favorite time to pursue wild roosters. By then, Darwinian principles have culled the easy birds, weather keeps most of the casual hunters at home, and months of on-the-job training have left the dogs performing at their best. Unfortunately, the same training prevents me from claiming off-season rustiness as an excuse for an occasional miss.

On this particular day, the snow was all the way down into the bird cover, a crunchy base overlain by 2 inches of fresh powder. Max was with me again, but Maggie stayed behind to nurse a sore foot. I replaced her with Rosy, one of our yellow Labs, in anticipation of clever late-season roosters hiding deep in thick cover and refusing to flush without encouragement.

The fresh snow left a precise record of the overnight wildlife activities: whitetails, coyotes, and, finally, pheasants. Their tracks led from a nearby stubble field to a nasty tangle of brush into which Max had already vanished. When the tone on his locator collar indicated that he had stopped on point, I reminded Rosy to heel, and we waded into the thorns together.

Experienced hunters learn to read their dogs’ body language. Max stood frozen, still as a statue except for the furious quivering of his docked tail, which told me the bird had not run out ahead of him. Neither did it flush upon my arrival, and I congratulated myself for the decision to bring Rosy along. When I released her from my side, she put her nose to the ground and plowed ahead into the tangle of thorns. Moments later, the rooster was briefly airborne before it collapsed at the sound of the shot. To Max’s disappointment, I awarded the privilege of the retrieve to Rosy.

Lori and I were expecting another couple for dinner that evening, so I was looking to complete my three-bird limit for culinary purposes. By the time I’d slid the first rooster into the back pocket of my game vest, Max expressed his disdain for the lost opportunity to retrieve by disappearing even deeper into the brush and going on point again. With Rosy back at heel, I reloaded my empty chamber and waded through the thorns into a warren of willows.

Providing friends a pheasant dinner can be a tough job, but I’m glad to accept the responsibility.