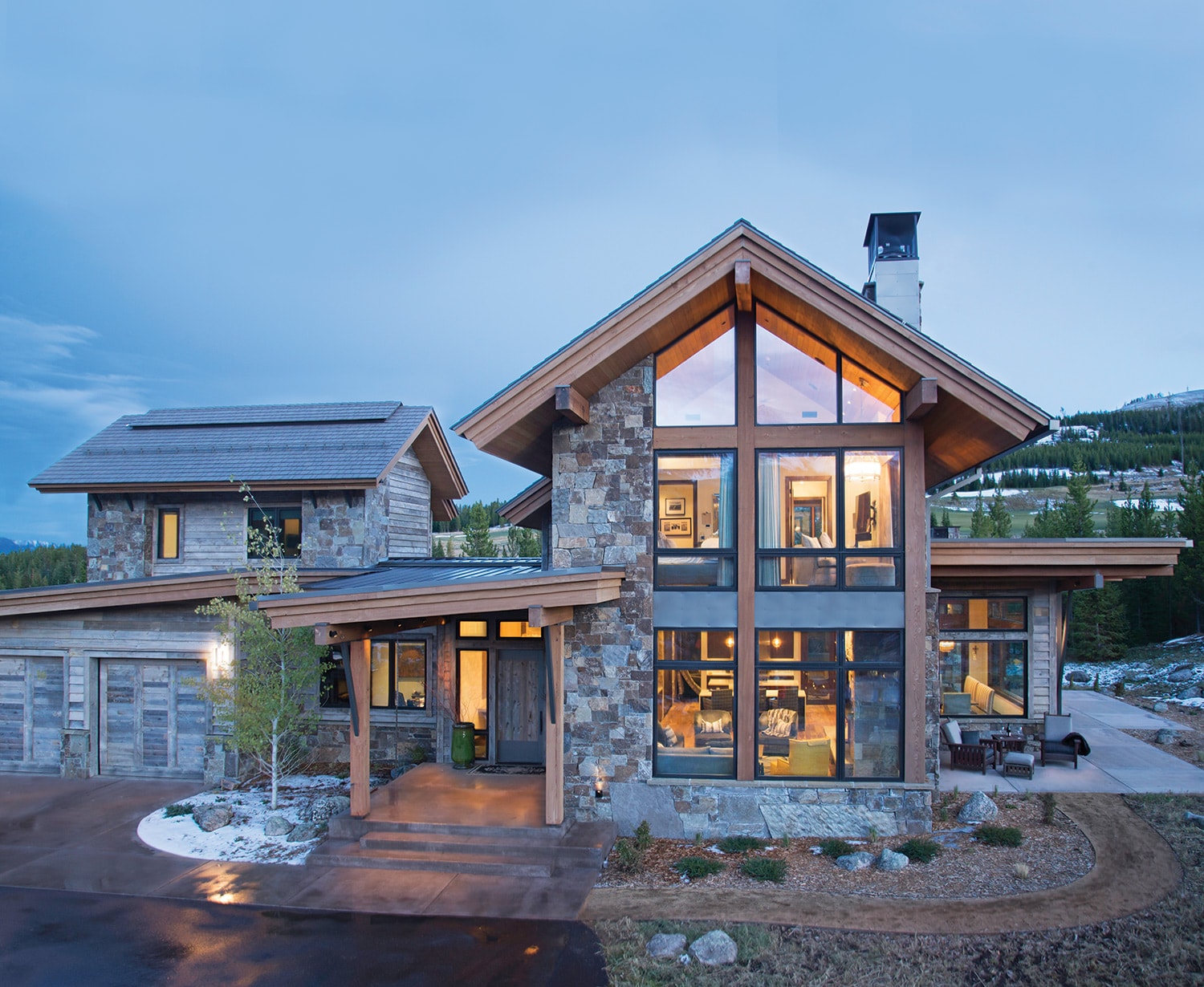 WHEN IT COMES TO DESIGNING A HOUSE IN MONTANA, one guiding principle stands above all others: You have to consider the views. After all, what’s the point of living in Big Sky Country if, even on the coldest day in February, you can’t look out the window and be reminded why this is, as they say, the Last Best Place? 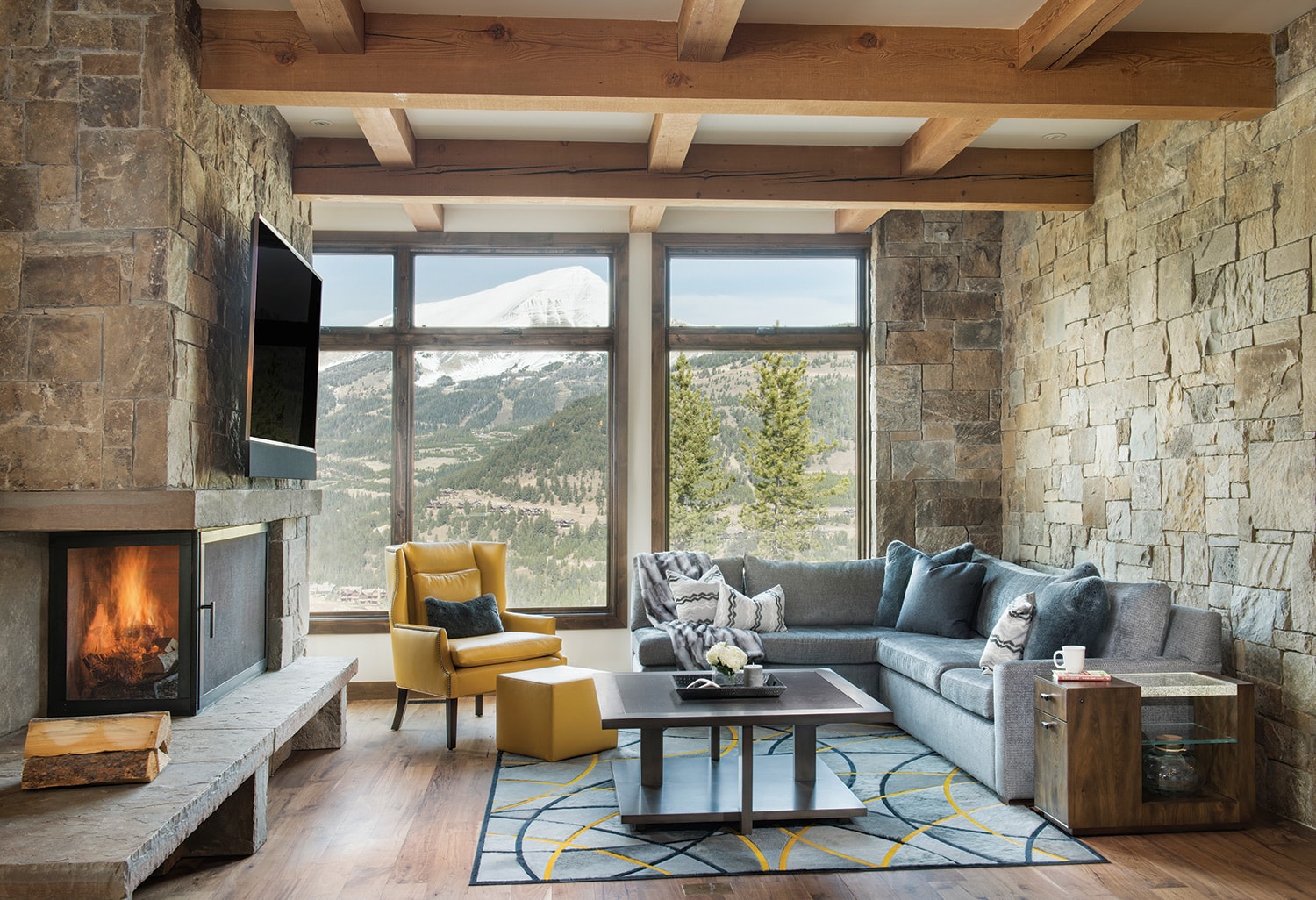 A view of Lone Peak provides a nice complement to the media room.

That’s why when Reid Smith and Bob Brooks of Reid Smith Architects started to draft plans for Tom and Laurie Weiskopf’s home in Big Sky, Montana, they adopted a simple, organic design principle: “Our main approach was to integrate the residential structure into the natural surroundings in a way that really emphasized the stunning views,” Brooks explained. That principle guided not only the location of the home’s footprint but also the choice of materials: The Weiskopf home is a stunning blend of stone and glass. 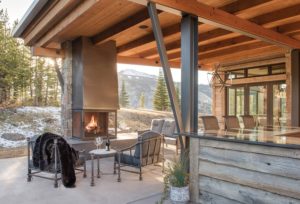 Outside entertaining was one of the first elements to be considered in the home’s design. 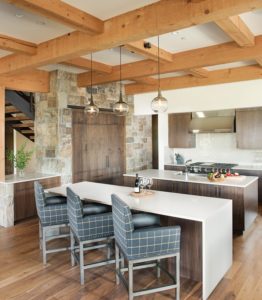 The color palette provides a soothing mix of cool whites and blues punctuated by the warm glow of natural woods.

The primary view from the main living area is to the northwest, where Lone Peak in the Madison Range overlooks the Yellowstone Club base lodge. In addition to considering that view, the architects integrated the home into its more immediate setting as well. To the south, the property backs up to the 13th hole of the Yellowstone Club Alpine Greens, a premier golf course that happens to have been designed by Tom Weiskopf himself.

Since the property connects to the golf course, Brooks and Reid included the Weiskopfs at every stage in the yearlong design process. “Tom and Laurie were awesome clients,” Brooks said. “They were so much fun and gave incredible feedback through the whole project. We worked very closely in the design stages. A lot of our process was to make sure the design incorporated all the views, and that the home would be situated in a way to take full advantage of the sun angles and exposures.”

The result merges pristine alpine views with a nearly 5,000-square-foot luxury home nestled into one of the most stunning landscapes in the West. The floor plan organizes the house around four central stone structures that link the building to its natural environment and give the interior a set of integral focal points. “Our design unfolds around four central stone anchors that serve not only to structurally anchor the building but also integrate the building into its surroundings,” Brooks explained. These natural stone anchors all connect to one another by exposed reclaimed and resawn timbers, lending the living spaces a rustic but relaxed feel. 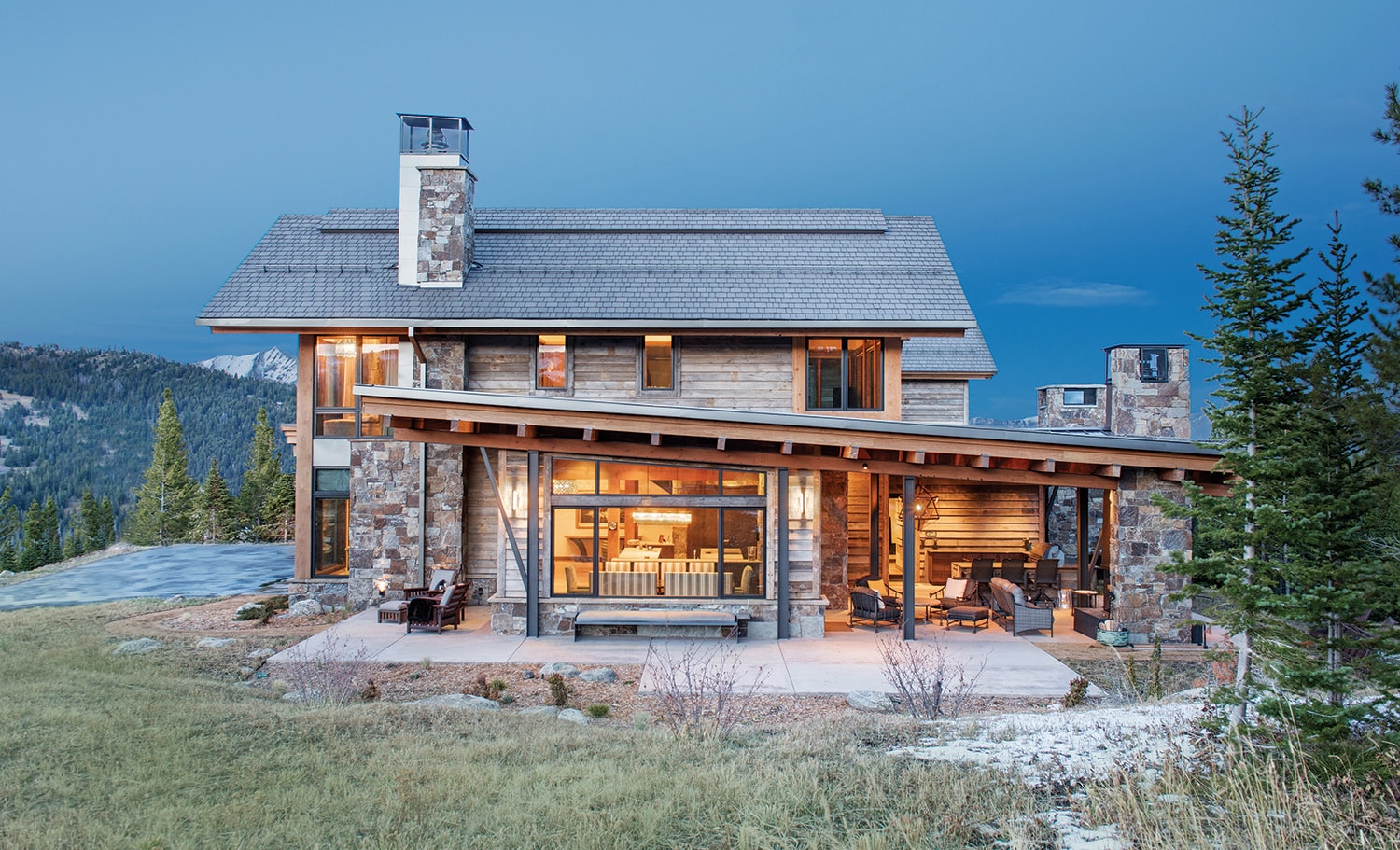 Damon Rao was the point man for the PRG Group, the general contractor for the project. “One of the most remarkable aspects of the project from our point of view was the way we all worked together to fast track this house,” Rao said. “The clients, the architects, and we as the builders all worked together so harmoniously that we were able to get the project constructed in 12 to 14 months — a truly incredible schedule for a house of this caliber.” 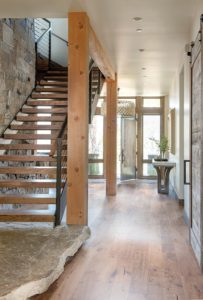 A wide staircase and open hallways facilitate the movement of guests from room to room.

Rao explained that the floor plan emphasized the “phenomenal vision of the stone layout and finish work,” and that one of the more unique features of the entire property was how the design influenced the efficiency of movement between the indoors and outdoors. “It’s an interesting indoor-outdoor setting,” Rao said. “We really admired the way the plans created these spaces that really work together well and connect the different settings naturally.” The actual installation of these features was locally sourced: Gallatin Timberwrights did the timber framing, while R Davidson Masonry did the stonework. 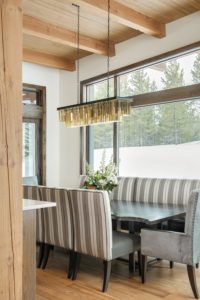 The masterful craftsmanship shows in both, and underscores the effect of the “anchors” the architects envisioned, as the traffic flow on the main floor circulates naturally around them.

The design also incorporates more modern elements, including a steel stairway with treads consisting of immense walnut planks, and a banister of black, oxidized cable railing. The stairway descends to an interesting natural landing — a massive flat boulder expertly tucked into the all-wood floors. “It’s a nice organizational element in the design,” Brooks explained. “You see it coming from both the master suite, as well as when you come in from outside through the mudroom.” Rao concurred on the stairway as a unique feature: “One thing that sets that house apart from other similar houses we’ve built is that unusual stairway with its stone landing.” 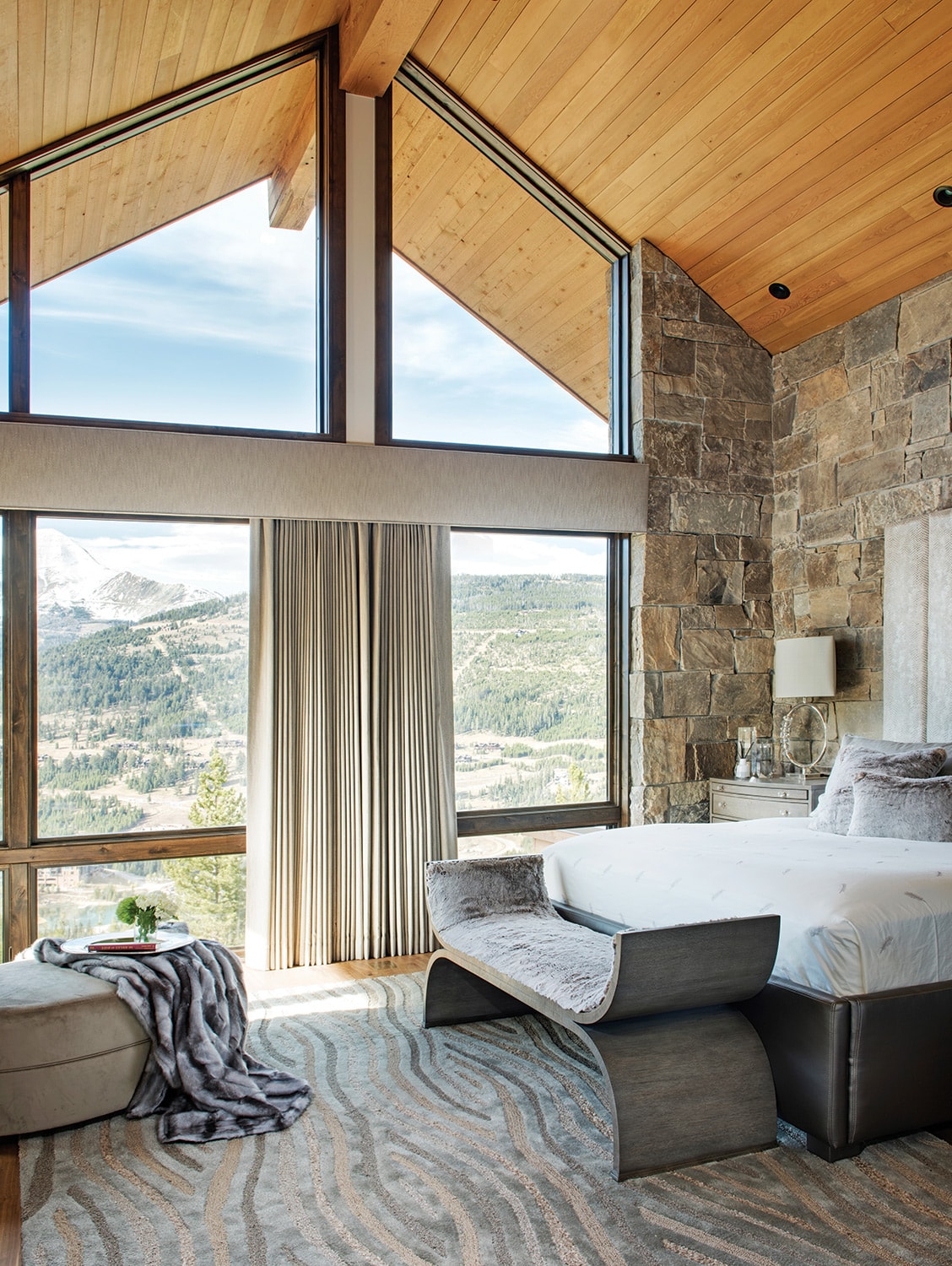 With windows comprising such a significant part of the design, the window treatments were also of concern. Privacy complements the view in the master bedroom.

Upstairs, an expansive master suite connects to a sunroom with southern exposure that provides a comfortable refuge on frigid winter days. “That southern sun can feel pretty good as passive solar energy,” Brooks said. On especially cold days in Montana, the views can be astonishing, and it’s especially pleasant to enjoy them from the warm side of a glass wall. 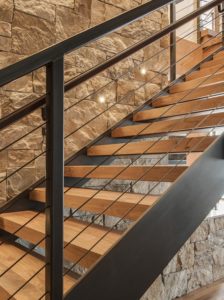 Glass is, in fact, a major component of the design for the Weiskopf house. Entire walls seem to be composed of massive sheets of glass that further enhance the sense of being situated in the alpine woods. All that glass puts in vivid display the most important feature of any home design in 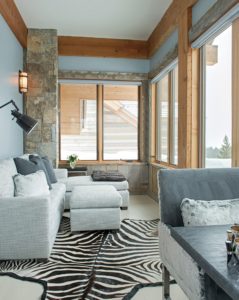 Western Montana: the unparalleled views of some of the most impressive mountain ranges in the world. Exterior walls with liberal stretches of glass facilitate the visual sense of being immersed in the woods all year around, through every season.

But another design element takes advantage of the pleasures of actually being outdoors in the more temperate months. “Another principle really critical in the design was that we wanted the people-flow between the inside of the house and the outside to be natural and inevitable,” Brooks said. “We designed the main kitchen and dining areas with entertaining in mind, and facilitated that for summertime by putting in an outdoor kitchen that connects directly to the main kitchen. It’s unobtrusive, and sits naturally amid a series of outdoor spaces that are designed to encourage the instinctive movement of people around a structure in the summer. You can choose between solar exposure or shade, taking advantage of the views in every direction.” 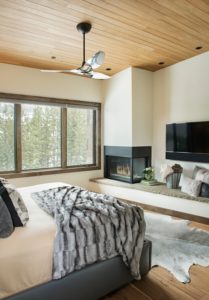 Winters can be cold in Big Sky, Montana. A fireplace in the guest bedroom helps lift the mood. 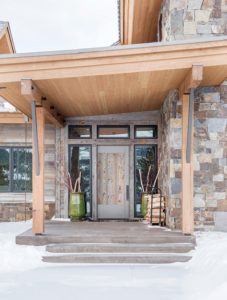 Weiskopf became famous through his first career as a golfer (he won 16 PGA Tour titles from 1968 to 1982), but since then he’s been just as successful as a golf course designer. He now has more than 40 courses on his resume, including the Loch Lomond course in Dunbartonshire, Scotland, considered to be among the most perfectly designed courses on the planet. When you consider the number of elements that go into designing a golf course — the obstacles and traps, the positioning of greens, skirts, and tees, anticipating the movement of golfers down the fairway — it’s perhaps fitting that the home designed and built for the Weiskopfs braids together so many different complementary elements. Stone, glass, and wood harmonize elegantly, providing a fairway for the movement of the residents and guests, from room to room and from indoors to out.