IT WAS WRITTEN IN THE STARS. After four years of looking, one of Jackson Hole’s most majestic and best kept real-estate secrets became known to a couple from Fairfield County, Connecticut. At the end of the road near the highest point on a steep, north-facing aspen-treed butte, this key 4.7-acre property had been reserved for the development of a residents’ club. But that all changed. The owners remembered: “We were the first to know and we immediately flew to Jackson. It was a wet, grey day with heavy clouds cloaking the peaks as we stood on the property and looked north. Our realtor held up, in front of our faces, a picture postcard of the entire Teton Mountain Range taken from atop this butte. Sold.”

Brad Hoyt, a Jackson, Wyo. architect with CTA Architects Engineers (of Billings, Mont., with several Rocky Mountain regional offices) was originally asked to design a traditional home that would provide a haven for extended family and friends, yet would also compliment and accommodate copious Beidermeyer antiques — heirloom family furniture from a storied heritage as far back as the 1820’s — to be moved from Fairfield County and Pittsburgh. However, Hoyt saw the natural amphitheater in which the home would be nestled. He also saw one of the most stunning views in Wyoming — in the world — and that from a 500-foot elevated pedestal looking out over a canopy of quaking aspen and blue spruce trees.

“The lot cried out for a home that followed the flow of this mini bowl, I had to preserve every aspect of that situation and view,” Hoyt explained. “The owners were open to my suggestion that a barrel-stave roof on a contemporary home would allow for so much more architectural creativity than a traditional home with view-limiting gable roofs and tighter design caveats.”  And the antique furniture? The juxtaposition works perfectly in a seamless marriage of old-meets-new, the interface between the honeyed maple flooring and the dark-legged pieces meets a stunning collection of generations-old rugs and runners. Modern design, in the shape of an electric elevator in the entry tower — which mimics a fire look-out — with large windows on all sides, even facilitated the task of moving-in the furniture and appliances.

Superbly crafted by Stewart Construction Services of Jackson, the whole is ingeniously designed around four ‘pods’ (guest house, entry tower, public area, master suites), positioned along the curved contours of the land, and joined by connecting corridors. With an angular difference of 45 degrees, the upper-level views feature Mount Glory (from the guest house) and the Cathedral Group (from the master bedroom), the central parts of the range being enjoyed from the public area, its substantial deck, and the entry tower.

Agoraphobics beware! The master shower’s vast clear window threatens to launch one, hawk-like, out over the tree-tops and on to the distant Wyoming valleys and peaks. Meanwhile, from the rear south-facing kitchen window, a reverse curve in the roof (which the family has nicknamed: the Gelande, or ski jump) lifts an eave, bringing more intimate enjoyment of the close-in flora and fauna, and the skyline of the butte immediately above.

With design-rich barrel roofs; sweeping ceilings of curved and interconnected laminate beams; raised plates and lakes of glass; the pods’ distinctive upper levels project an artistic yet substantial, Modern yet enduring superstructure. This, in turn, is carried by a no-nonsense lower level with fort-strong, battered limestone walls, and the only level of the home that is dug into the hillside at the rear. It was most important to both Hoyt and the owners that site disturbance be kept to a minimum.

Whilst the upper level, the domain of the elders, speaks of fine and tranquil living, of order and organization amongst exquisite furnishings; the lower level is a fully-contained summer camp-like collection of rooms in two separate apartments for immediate family. There’s a super-cool ship-like bunk room for eight kids, three en-suite bedrooms for adults, a billiard room with a great stone fireplace, and a true locker-room with storage cubbies and benches set-up for serious partakers of skiing, mountain-biking and all manner of outdoor sports offered by this Rocky Mountain lifestyle. Equally, industrial strength laundry, boiler and mechanical rooms line the south-facing walls in further testament to the intent and longevity of this family domain.

Intentionally, there’s not a full kitchen in the lower level, which requires that dinners be eaten en famille  in the splendid red-walled dining area upstairs — a desire of the owners. This love flows throughout the house — there is a saying on a cushion that reads: “If you ever leave me — I’m going with you.” And there is love in the home’s name: Star Dancer — a reference to a passage in The Little Prince — which memorializes a lost daughter, and allows her to be with her family — every day. 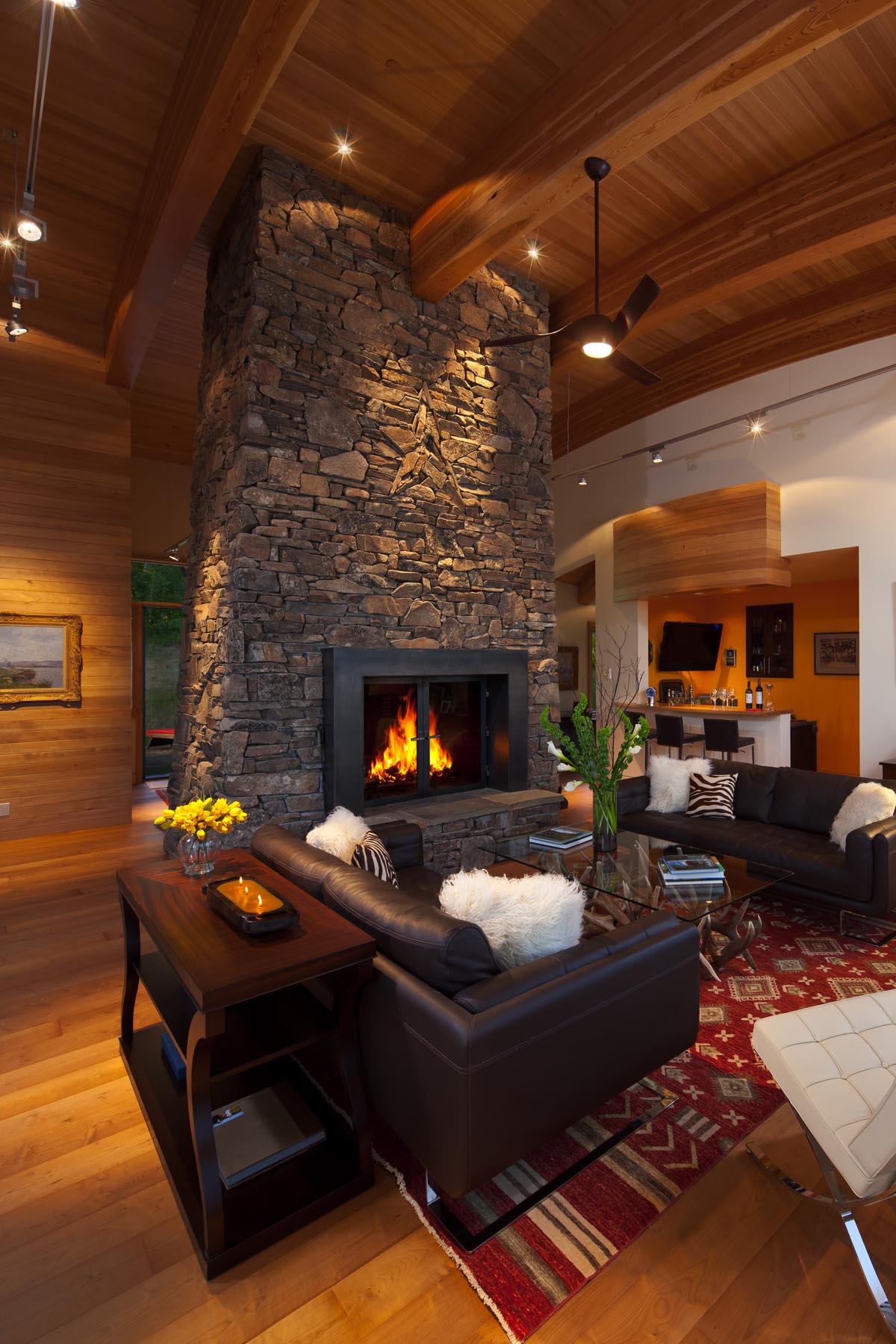 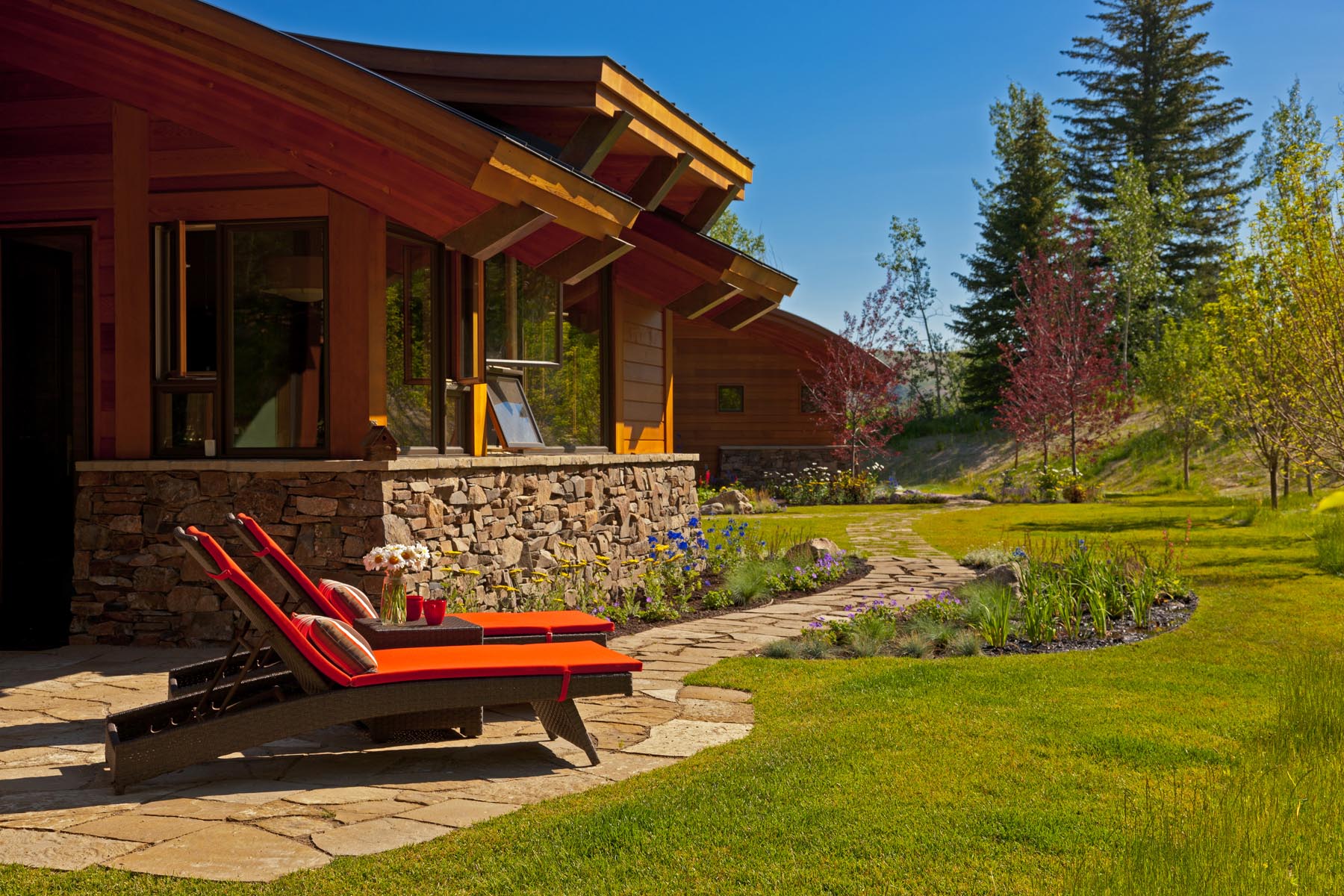 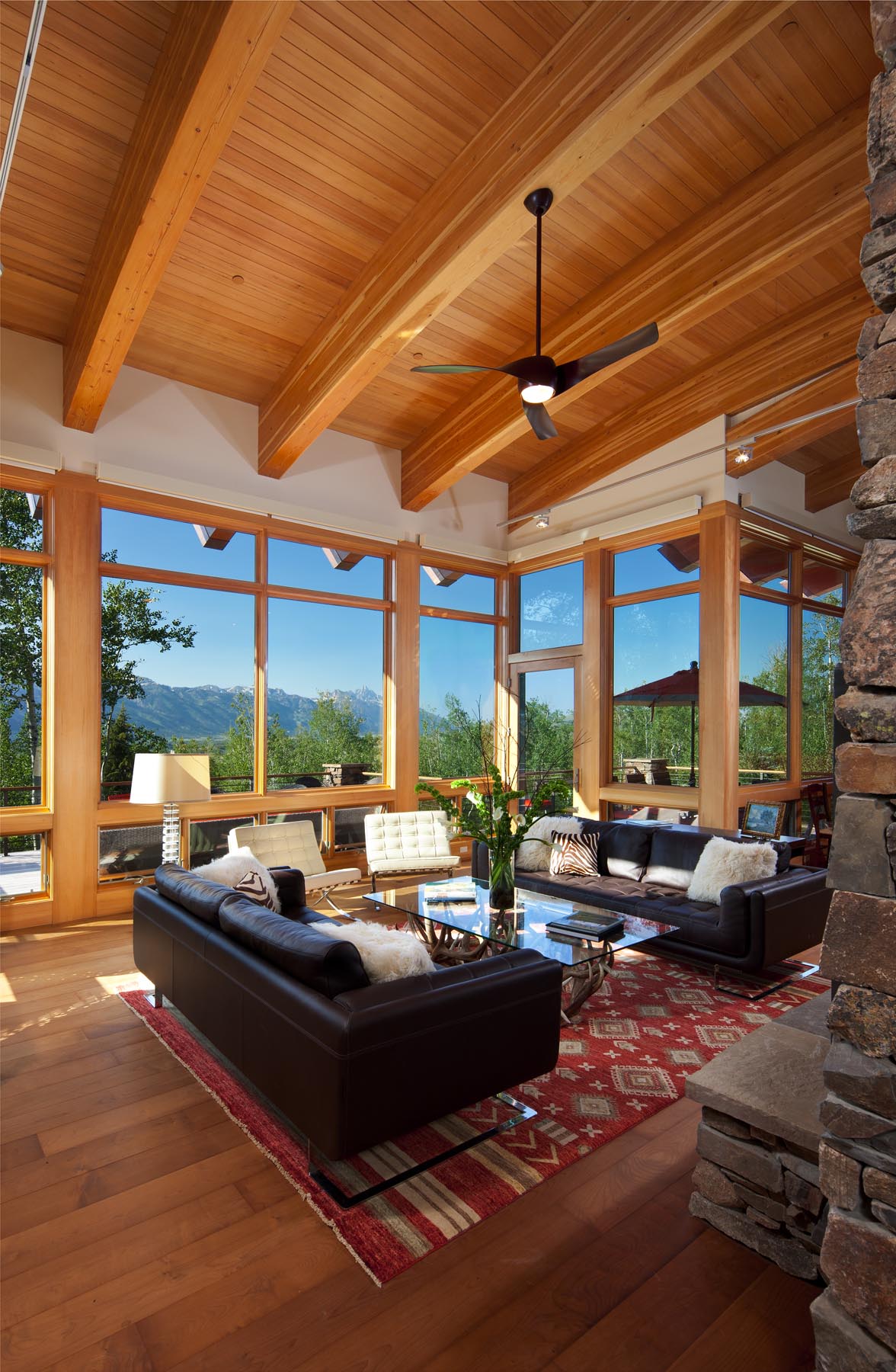 The great room was specifically designed to feel comfortable for even small-sized groups. A large upper level deck extends the living area during warm weather. 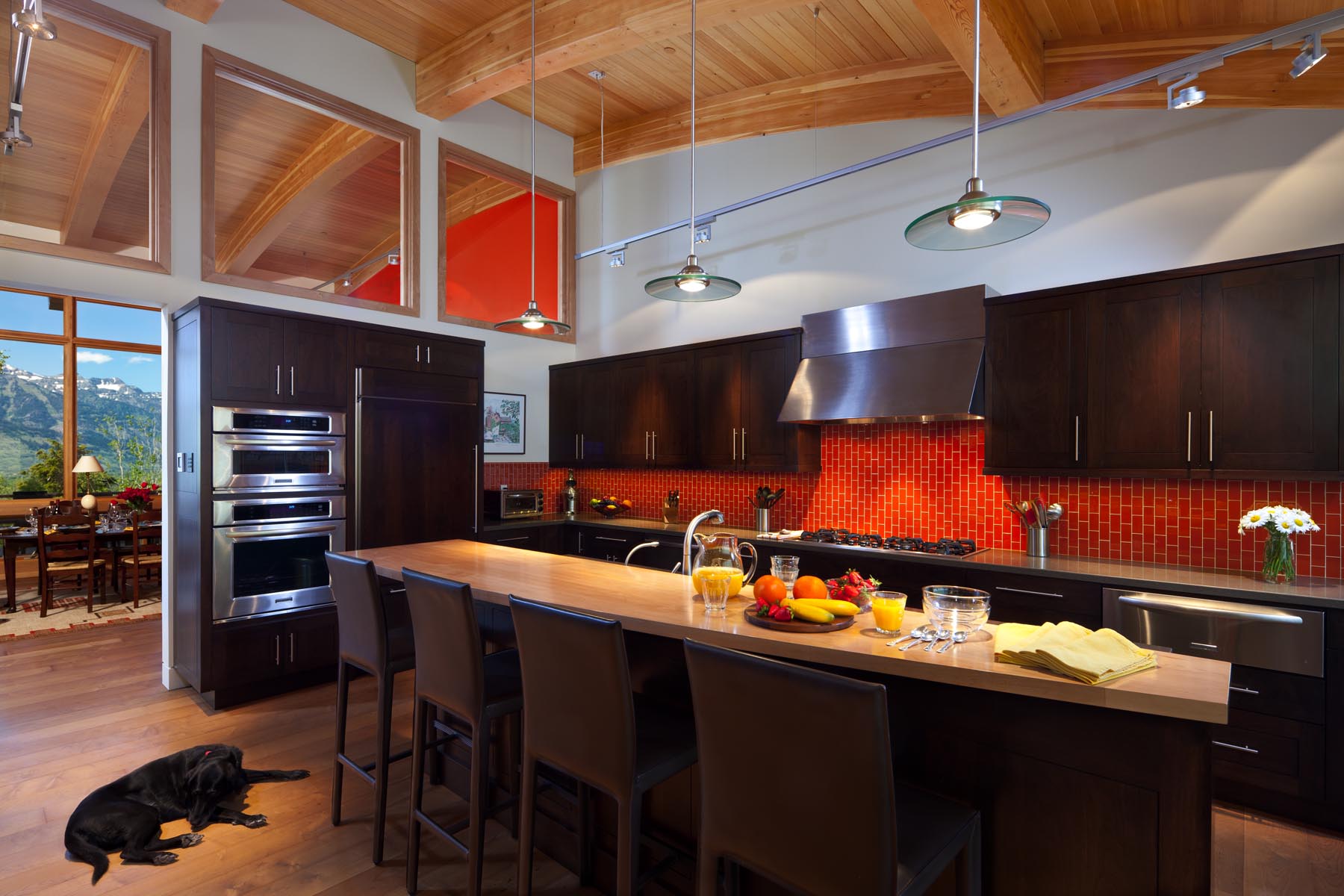 The kitchen bar accommodates informal meals while the tangerine tile backsplash converses with the dining room beyond. The detailing is clean, yet warm. 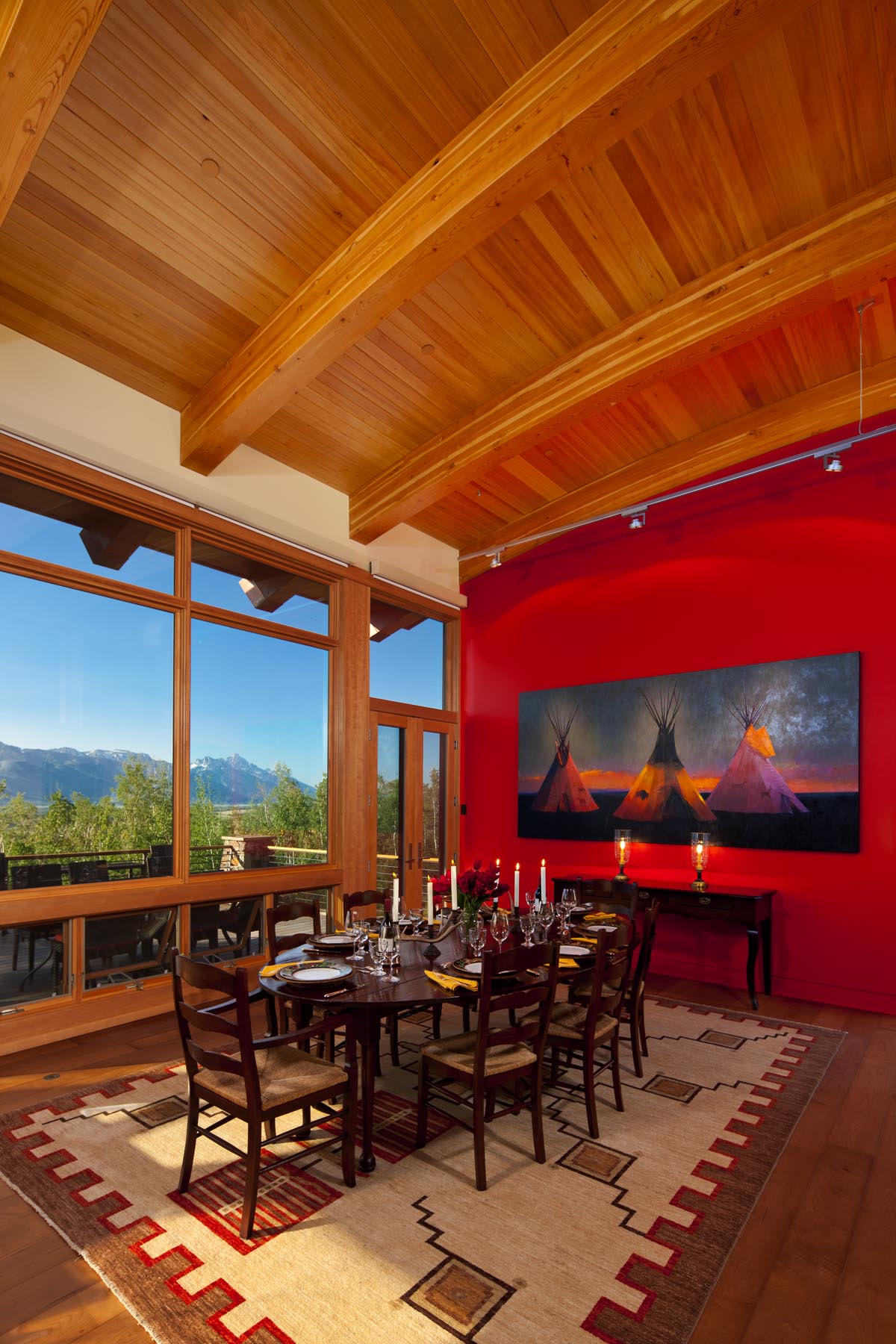 Panoramic views of the Teton range have been maximized at every opportunity including in the dining room where traditional family furniture is showcased in a warm contemporary space.