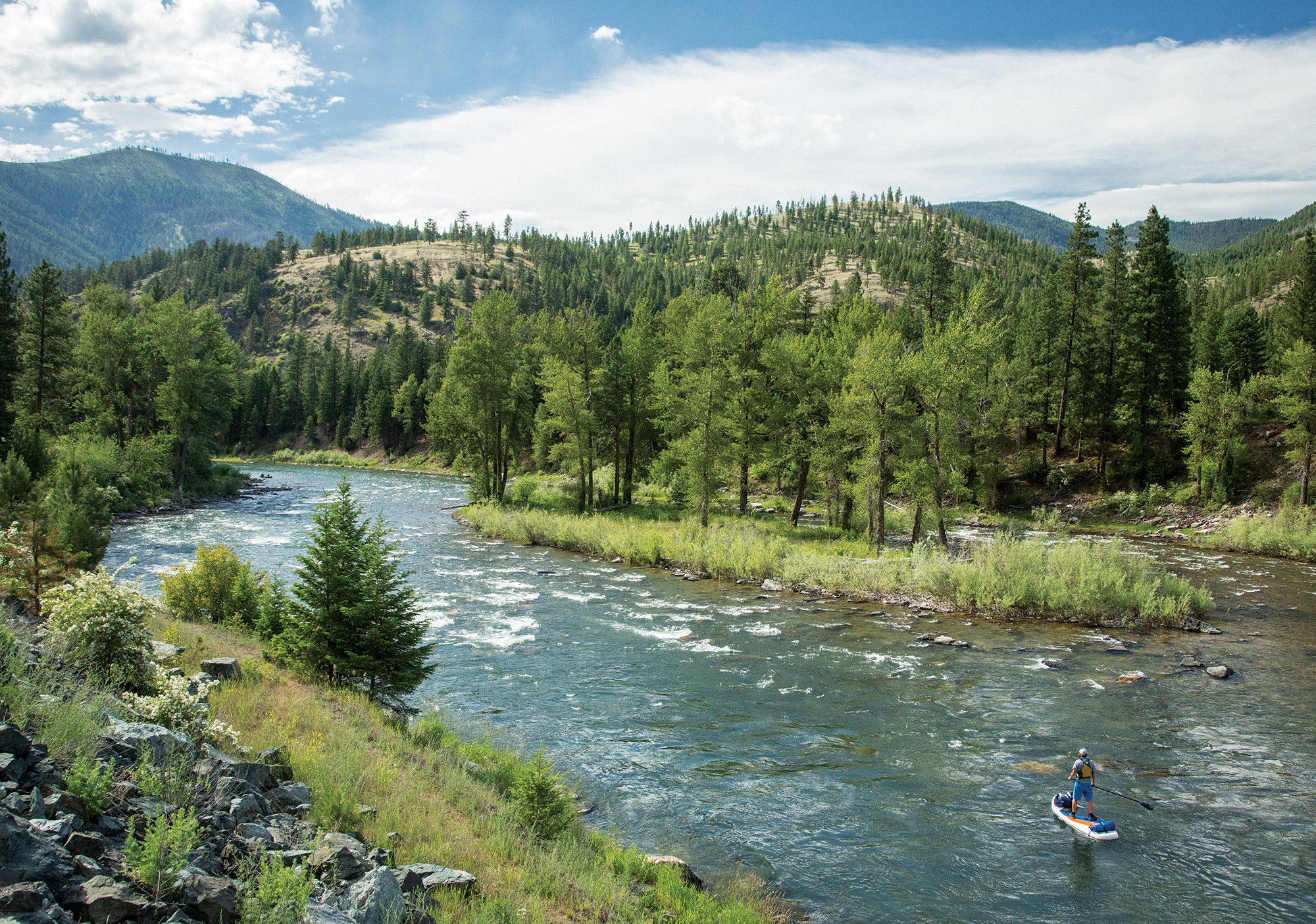 THE CURRENT PICKED UP SPEED as I focused intently on the line I had picked out from shore. I needed to go to the right, but the river wanted me to the left. My desperate attempts to stay in the smoother water proved futile. Left it was.

I crested the first wave in the train, then the second, and the third — up the three-foot face and down into the trough, paddled out to the right, bracing with everything I had. Again and again until somehow I neared the last, biggest wave. I slipped onto its downstream side, still standing on my board.

“Did I just run Roundup Rapid on a stand-up paddleboard?” I allowed myself the thought even as I saw the approaching boulder, barely hidden beneath the water’s surface. It was directly in my path, and in an instant, the board stopped and spun around, hung up on the rock. I drove the paddle into the water in a frantic attempt to stay upright. If I could balance long enough for the board to spin away, there was a chance I could recover and drop into the deep pool just below the rock. I levered the paddle, bracing against the current in a last-ditch effort to maintain verticality.

The board turned beneath me, trying to work itself free. And then, with a sudden jolt, I lurched over into the water, grabbing for my board as I watched my paddle bob past in the current.

But wait, I was still holding my paddle. Gripping the board with one hand, I looked down at the jagged edge of the paddle’s fiberglass shaft in my hand, dully registering that it had snapped in half.

I hauled myself onto the board and took a few feeble strokes with the handle. A hundred yards of rock garden lay just downstream, and I needed to get to the bank. Slapping my chest onto the board, I cupped my hands and paddled furiously through the pool. “What are we going to do?” I thought. “After all this? To break the paddle in half and lose the blade … We still have half of the trip to go. What the hell are we going to do?”

The board bumped the gray rocks lining the riverbank; I stumbled up and fell again into a heaving heap on the solid ground.

The Blackfoot River flows for roughly 130 miles, winding from the Continental Divide east of Lincoln, Montana, to its confluence with the Clark Fork River about 8 miles from downtown Missoula. Its legendary fishing and its proximity to Missoula make it one of Montana’s most popular streams. When the water warms up in mid-July, the annual “tuber hatch” hits, depositing hundreds of bobbing, half-baked locals on the flatter 15-mile stretch from Johnsrud to Weigh Station. It’s also one of the state’s best intermediate whitewater runs with stretches of Class II and III whitewater.

But photographer Aaron Teasdale and I had more ambitious plans than a leisurely six-pack tube float. On a bright Friday afternoon that kicked off the solstice weekend, we piled our inflatable stand-up paddleboards, camping gear, and life jackets into the back of my ragged Subaru and offered my neighbor 50 bucks to drive us from Missoula to the Cedar Meadows put-in. Unlike most river trips, we wouldn’t need a second car at the takeout. Our plan was to take advantage of the long days and push 85 miles to the Silver Park takeout on the Clark Fork, just a couple of blocks from my house in Missoula’s westside neighborhood. We hoped to be back by dark Sunday evening. If anyone had cared, we would have felt pretty confident claiming that ours would be the first self-supported paddleboard trip down the Blackfoot and on to Missoula.

Travelers on Interstate 90, which runs right past the intersection of the Clark Fork and Blackfoot, might be forgiven for thinking the landscape has remained unchanged for centuries. There’s no dam, no reservoir, and healthy (if young) cottonwoods and willows sprout from the floodplain upstream of the confluence. A new state park belies the fact that two years ago, the Milltown Dam would have made our trip impossible.

There are already exhaustively-researched books available that tell the story of the area’s transformation from an arsenic-laden public health tragedy to a wild, free-flowing success. The abridged version: In 1908, just a few months after William A. Clark built Milltown Dam and impounded the final few hundred yards of the Blackfoot and a half mile of the Clark Fork beneath the Milltown Reservoir, a massive flood sent millions of tons of heavy metal-contaminated mining waste cascading down the Clark Fork. Roughly 6.6 million cubic yards of waste hit the dam and settled in the reservoir.
In the early 1980s, county officials discovered arsenic in nearby Bonner’s residential water wells, and eventually linked the contamination to the reservoir. By the mid-2000s, public support coalesced around removing the dam and the poisonous sediment. Finally, by 2010, the dam had been demolished, the toxins had been carted off, and on a blustery mid-December day, the Clark Fork once again flowed in its historic channel.

Two years later, in 2012, Montana Fish, Wildlife and Parks quietly announced that a new set of leave-no-trace, float-in only campsites on the Blackfoot could be reserved in advance. When I stumbled across a description of those sites in a short Missoulian article from 2013, I immediately put the reservations number into my phone.

Our first day on the water went pretty smoothly. As Friday’s solstice sun arced west, we paddled past spectacular badland cliffs and pastoral cattle ranches. Headwinds, a constant foe the entire trip, forced us to our knees for extended stretches, but we covered the 12 miles of mellow paddling just as the last shadows of twilight faded into night. Aside from the neighbor who had dropped us off, we didn’t see a soul.

We would need to cover 28 miles on the second day, including the Blackfoot’s most notorious rapid, Roundup. The third day would include Thibodeau Rapid and a marathon 35 miles of paddling all the way back to Missoula.

The hours drifted by in a constant rhythm of paddle strokes as we floated past open, sage-swept valleys and ponderosa- and Douglas fir-studded forests. Occasionally Aaron would spy a good vantage point and scramble up the bank to snap photos while I paddled upstream and down again, dutifully furthering my nascent stand-up paddleboard modeling career. We ate lunch on the boards, sat down when we got tired of the wind, stood up when we encountered rapids or needed to make time. Fluffy merganser chicks, plentiful ospreys, and regal bald eagles accompanied us as we bounced through fun Class II whitewater or rested in flat water.

We got to Roundup in the early evening of the second day. Aaron, suffering a nagging leg injury, opted to portage, so together we hauled his gear around the whitewater and scouted the best line for me to try. With him perched on a midstream boulder, camera in hand, I took a few deep breaths and paddled into the current. Forty-five thrilling seconds later, I lay heaving on the bank, the broken paddle dampening the ground beside me.
With my paddle broken, the only option required the type of favor that renders a self-supported trip moot. I scrambled up the bank and called the cavalry. Miraculously, she was home and willing to drive an extra paddle 35 minutes up Highway 200. At 8:45 p.m., I smooched the trip savior, my wife, and Aaron and I slipped back into the current to pick our way through the 3 miles of rock gardens downstream of Roundup. As we wondered aloud about donning our headlamps, we found our riverside campsite in the gathering dark.

On our final day, the river was awash with people. The closer we got to Missoula, the more we saw: drift boats and rafts full of families out for a Sunday float; life jacket-swaddled dogs merrily leaping from catarafts; even a few stand-up paddleboarders. I ran the crux move on Thibodeau cleanly, but slipped off the board on the last steep wave in the train below.

Aaron scrambled up bridges to shoot me passing below. We stretched tired backs and cramped hands. By 8 p.m. Sunday, we paddled past Weigh Station, the effective end of the Blackfoot for the last 100 years. Half an hour later, we glided onto the Clark Fork for the last 8 miles of the adventure. In Hellgate Canyon, Aaron decided he wanted pizza. I couldn’t argue, and 20 minutes later we sauntered onto the deck of the Finn & Porter, our boards and gear on the riverbank cobbles just below. The waitress delivered our pizza and two cold pints of Blackfoot IPA as tourists stole glances at the two wild-haired river dudes whose food arrived seemingly before they even ordered it. We raised our beers, chowed our ‘za, slapped some cash on the table, and paddled back into the current to cover the last few miles.

A purple and orange sunset stretched far to the west, softening Missoula’s skyline in a wash of late evening light. After so much river time, the paddle felt like an extension of my arms, the board intrinsically connected to my feet. I breezed through the final rapid and peeled into the eddy at Silver Park.

Walking up the bank to lay my paddle on the grass, I gave Aaron a high-five. “We did it. Back before dark Sunday evening, just like we’d planned,” I enthused.

He glanced at the still wet paddle and smiled, “Well, maybe not exactly like we’d planned.” 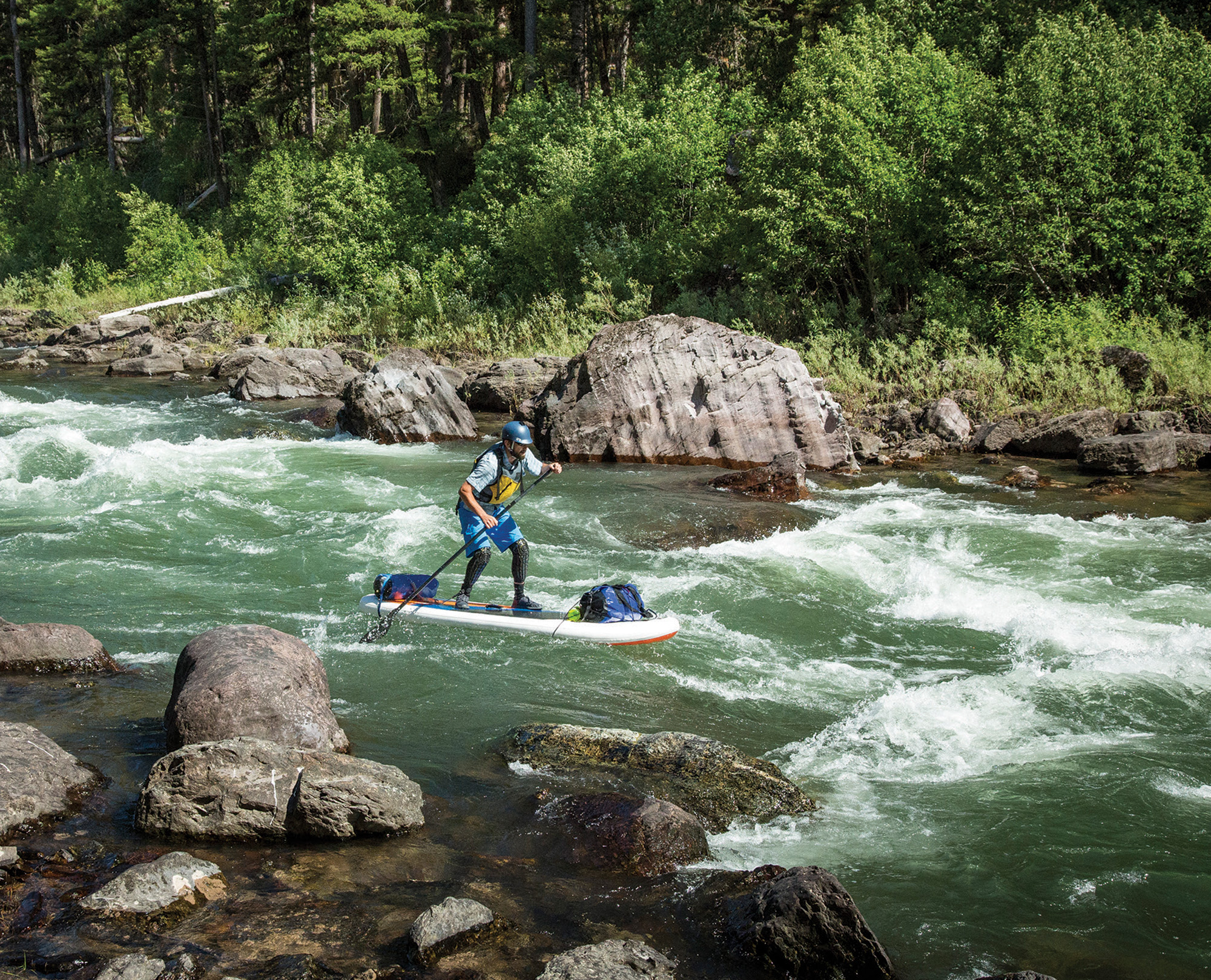 Peters heading into some whitewater. 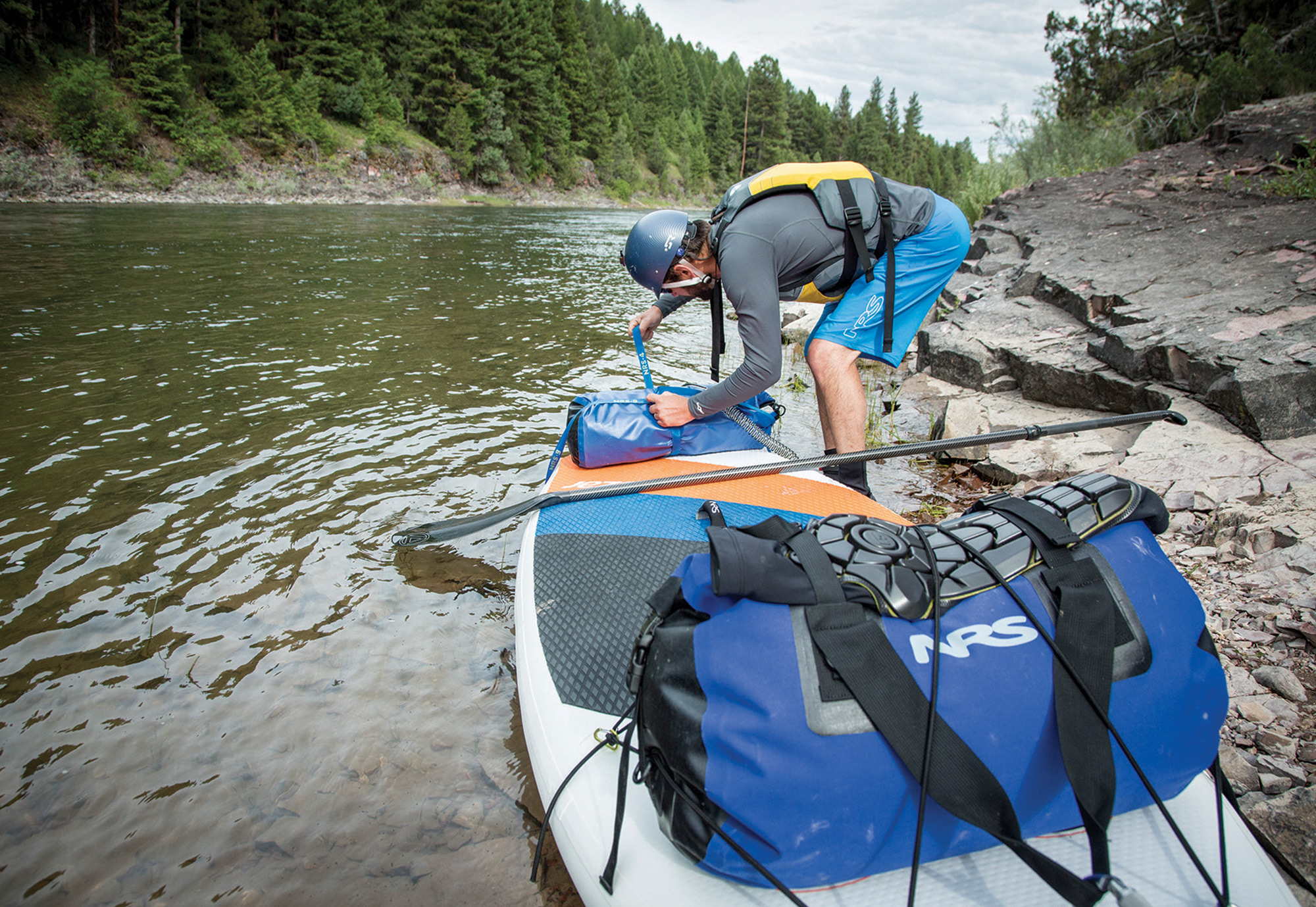 Waterproof bags, strapped down securely, are a must for multi-day SUP excursions. 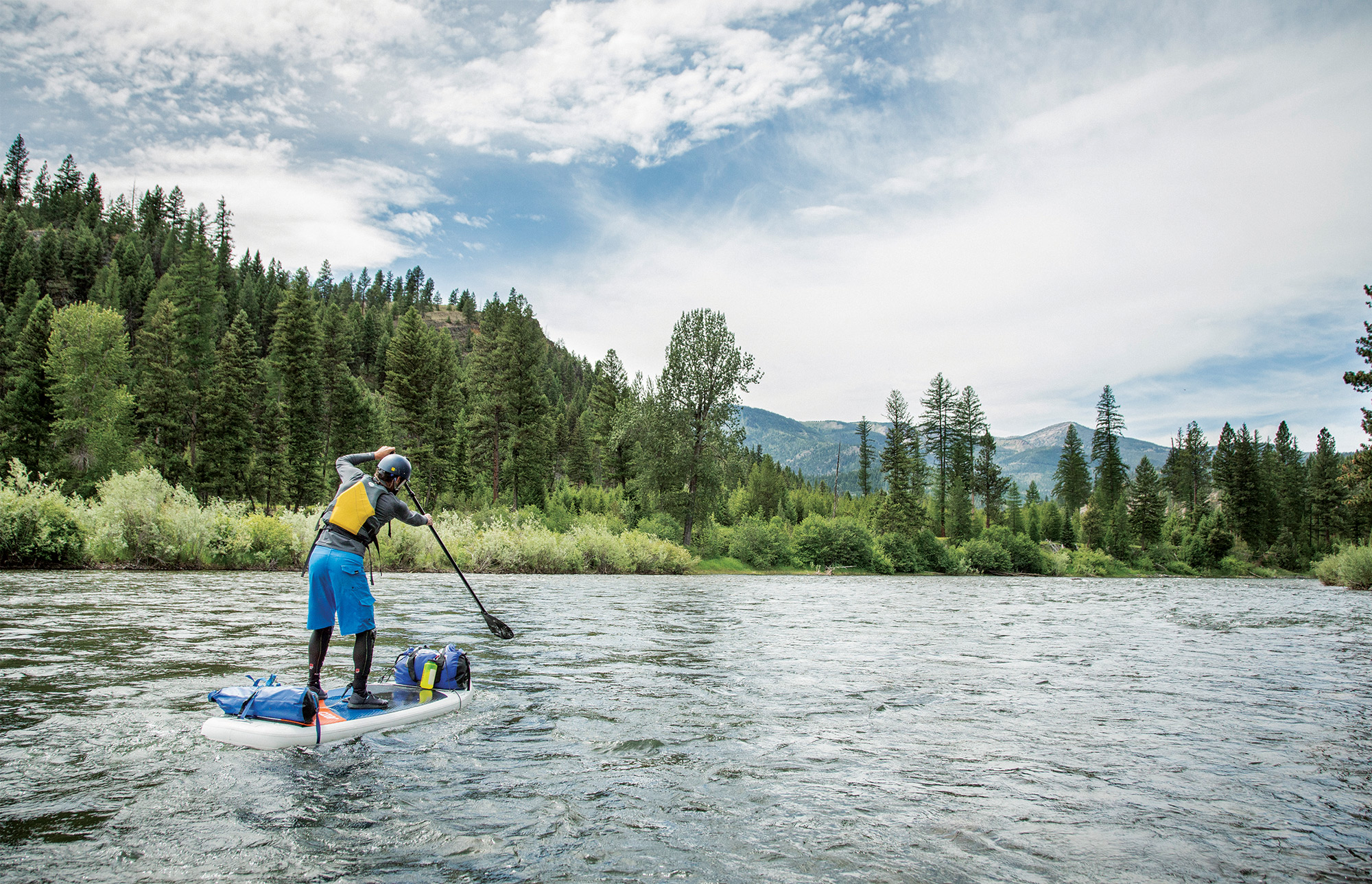 Peters digs in during a moment of flat, wind-free paddling. 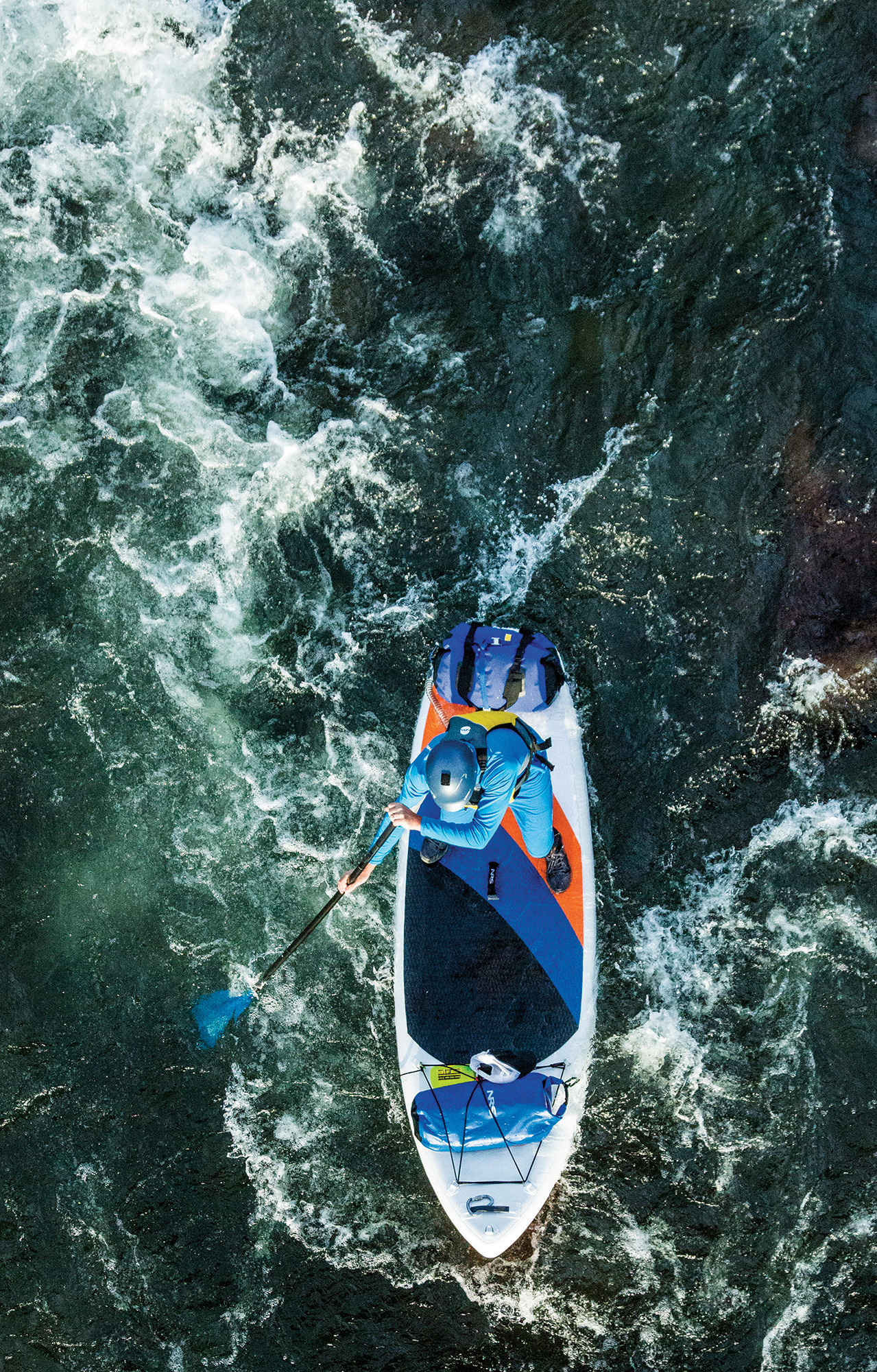 The Blackfoot’s whitewater is a perfect challenge for paddleboarders willing to get a little wet. 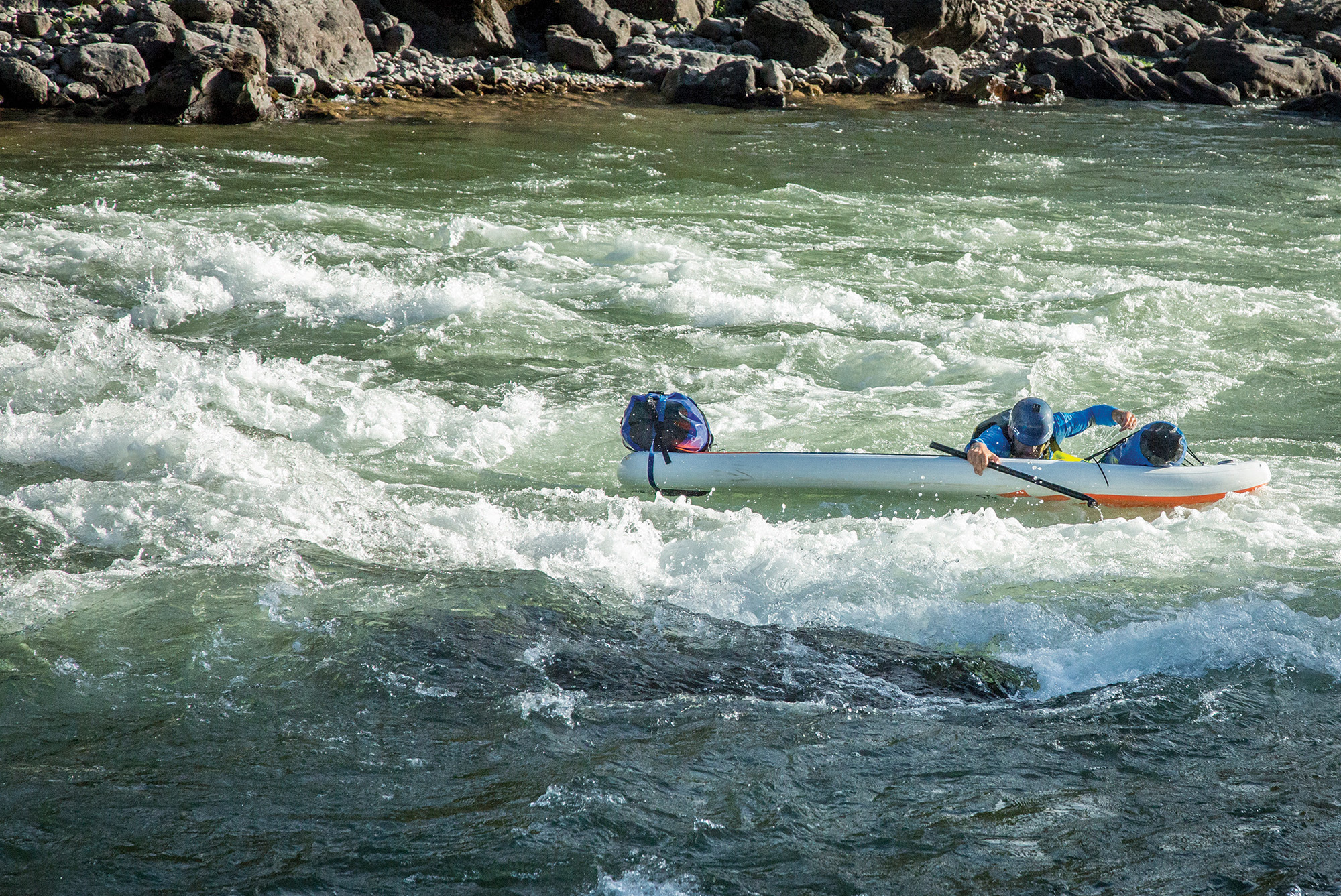 Roundup Rapid proved too much for Peters and his paddle. 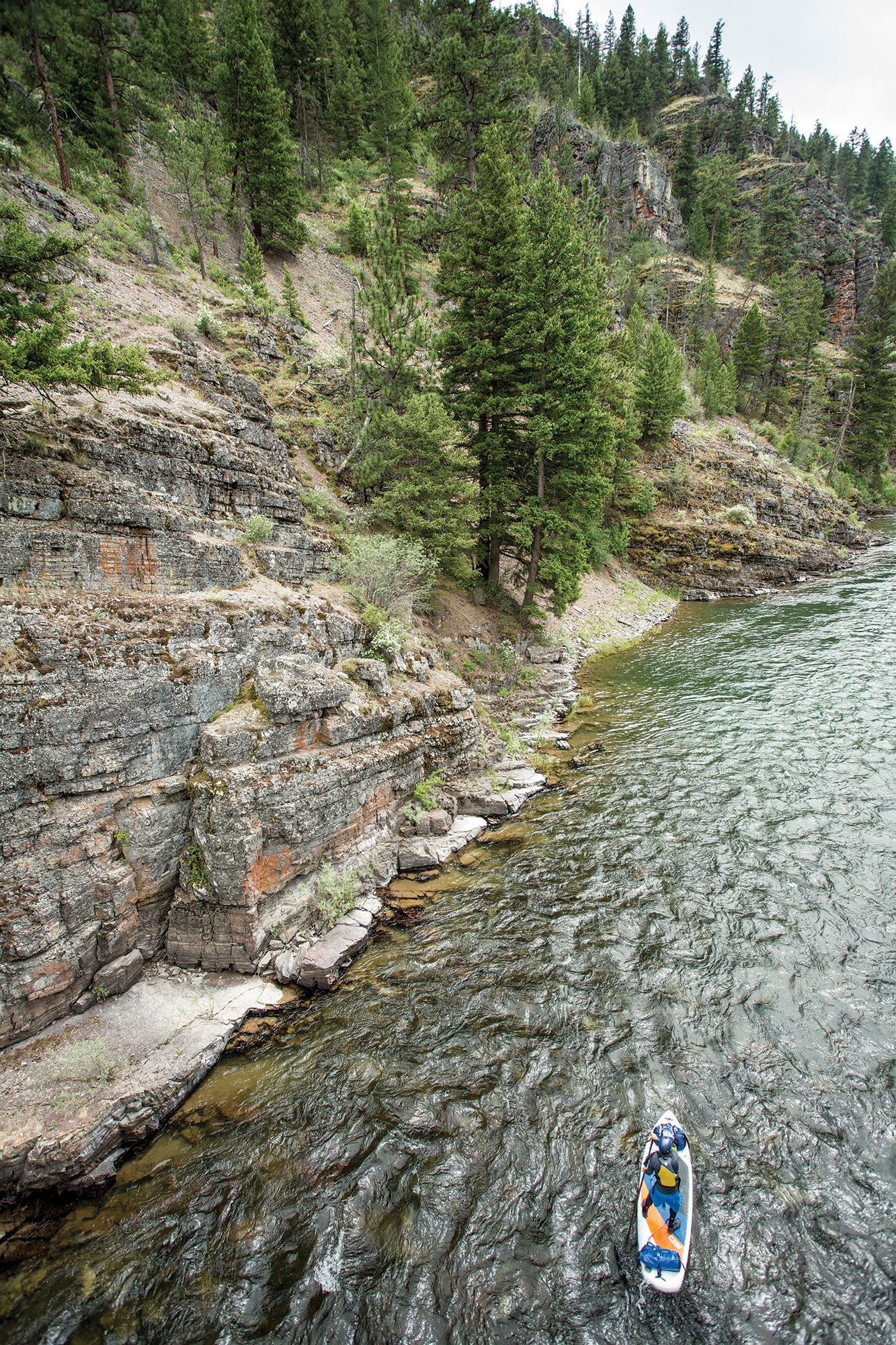 Beautiful cliffs provide for scenic paddling on much of the Blackfoot. 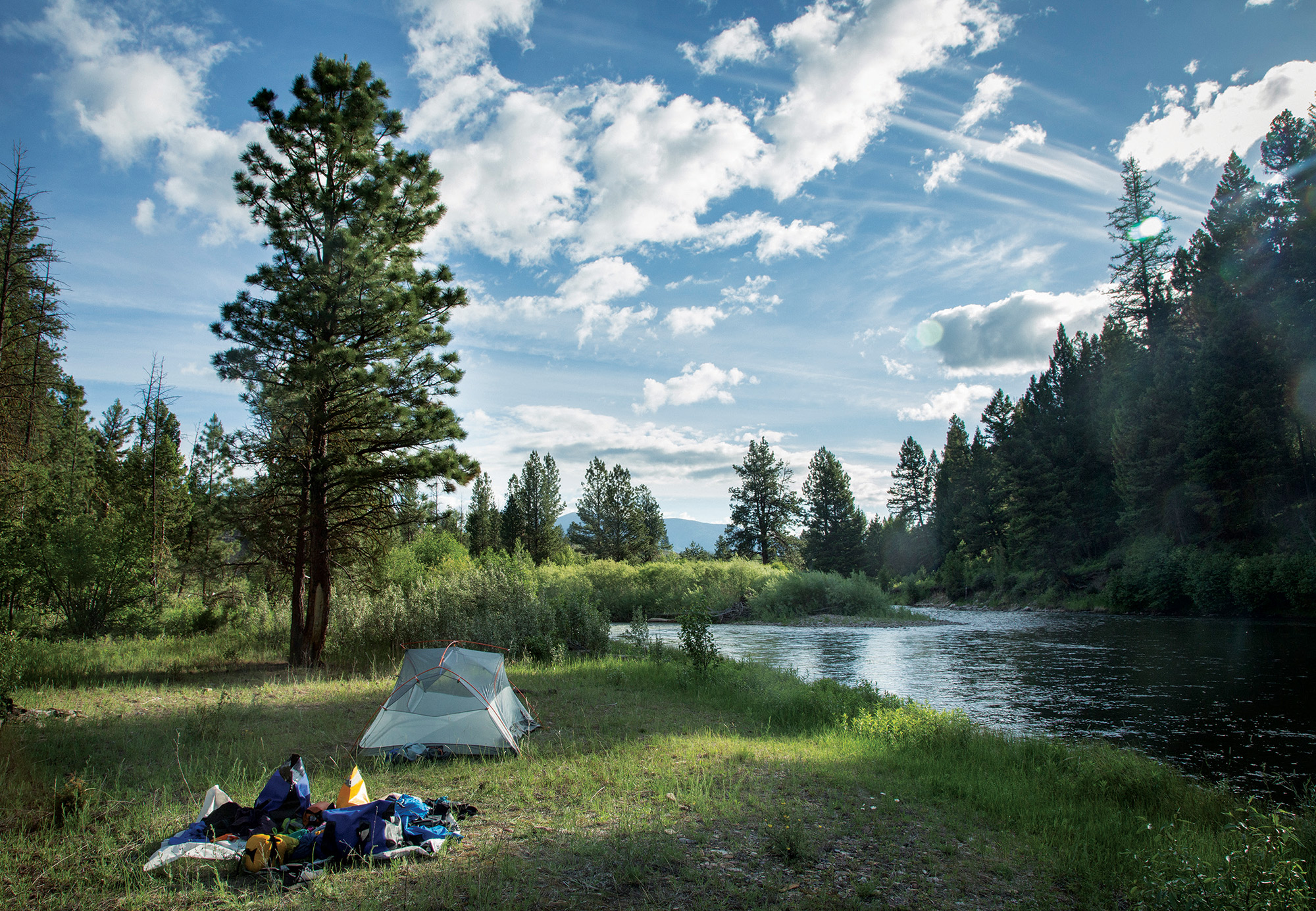