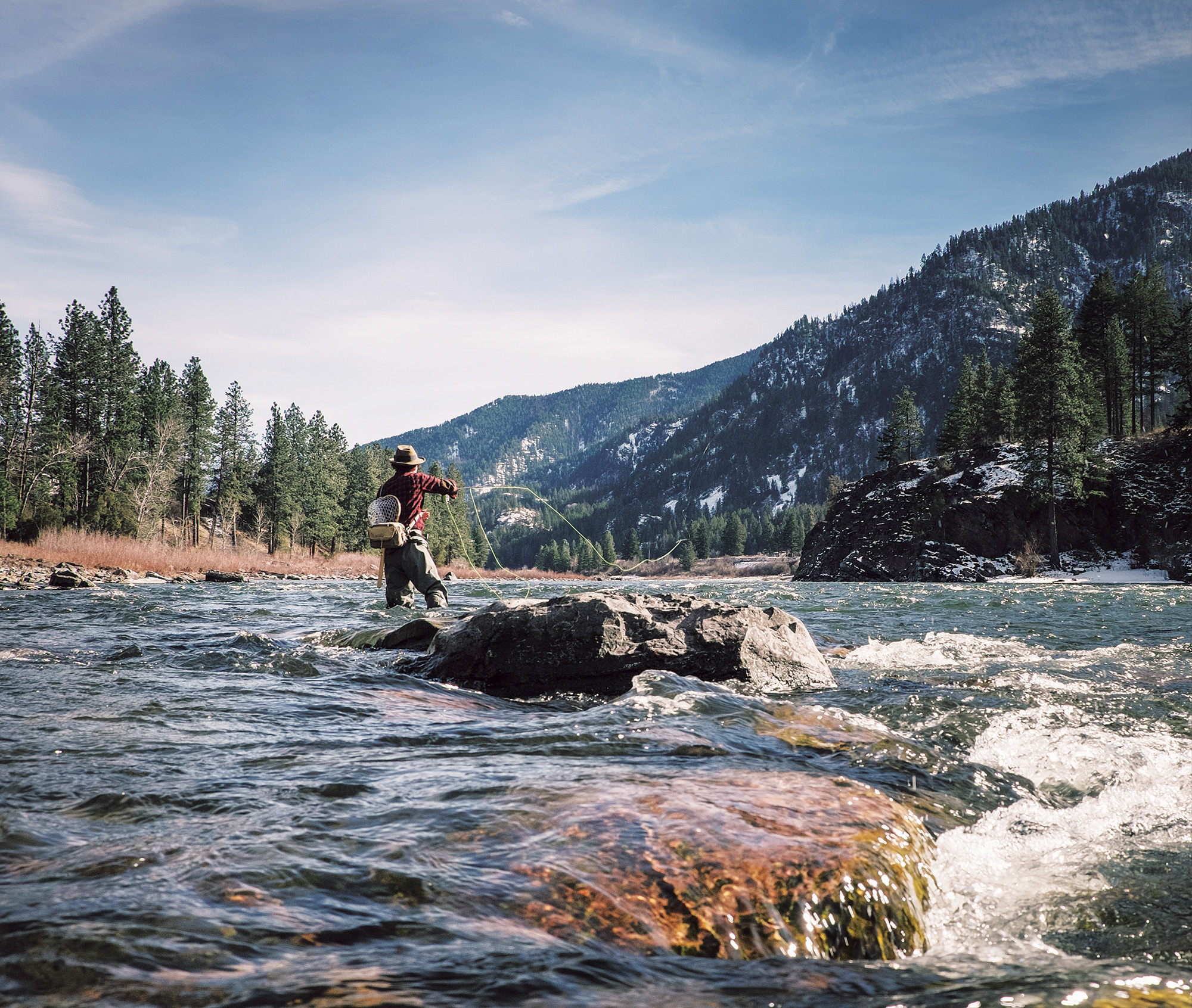 SPRING COMES SLOWLY HERE at the edge of the mountains. There are the days when the sun shines warm with a quality of light — the soft yellow of the outer petals of daffodils — forgotten in the long, slow months of winter. But just when you think that light will stay, snow and wind roar and pelt in the night. The next day is iron cold and gray.

It might be a week, maybe two — the cold holding firm its icy grip. But the new light persists. You hear the drip of melting snow and ice in the afternoons. The streets and the paths are wet. It’s a quiet subversion against the winter cold — tentative, subject to change. But you know down in your bones that soon the world will be converted. Trees, grass, sky, stream. Even the trout.

I look for them in the stream. From their torpid, slow-moving winter state, they wake — flashes of silver in the water. Small flickers of red or yellow like brush strokes in a painting. They hang along the edge of the flow, just outside the swell and push of the current. They watch, wary of all above them: shadows, swooping birds, hands, arms, fly rods. But at this early point in spring, most of all they hunger, needing something to fuel their awakening. So they wait, wait for something to emerge or stream by, something moving and alive, some tiny something caught and carried by the water, drifting in the flow of the same stream they float in.

I like to think that they know; that in their coldblooded way, they too feel the push and flow of spring. They sense that they are alive for one more year, that like everything else on this earth, they must respond. Soon they will dart across the current like a bolt of lightning in the sky. After all, this brisk awakening will only last a while, and another year will move on — summer, then autumn and yet another frozen winter.

These are the days when I watch and wait just like the trout, measuring the temperature by how much clothing I have to wear to feel comfortable. The heavy coat or the light one. My Filson hat or a brown cap with a trout leaping on the front, curved in his jump from the stream. I watch the sky, analyze the clouds, calculate the color of the light and the direction of the breeze. Already I feel the fly rod in my hand, already my arm and body anticipate the movement back, then forward into the cast. I imagine the line behind me, then over my head, unfurling in its slow curve like the year itself. I’m thinking there are only so many springs in a lifetime, only so many times I will feel the air turn warm and coax trout back to life. Only so many springs when I will be able to cast and position a fly right along the cut bank of a stream and watch it dead drift back down my way.

I calculate the snowmelt. When the high country thaws, whole hillsides of snow will melt into the streams, making them into raging rivers of debris, silt and mud that flood the meadows. It is the only way for the grasses to come back, for the bogs to exist, for the flowers in the meadows to spring forth — Indian paintbrush, columbine, golden aster, bull thistle. But for all the good it does, the snowmelt will suspend fishing for weeks, even a month. So I wait for my moment, knowing I must not squander these early days of spring. Like placing a fly just right, I must time my early spring fishing to beat the snowmelt.

Then there are three days, three days so much alike that they could be the same day. The same rosy dawn, the same 50 degrees at midday. A breeze that is brisk and cool but does not blow in a storm. Then, as surely as the birds know when to build a nest or when to fly away to another country, I know my time has come. The trout will be moving, darting, eating. I must go now so I can fish for a spell before the great melt comes.

The next morning I wake up early, pack my rod, my waders, my fly vest. I pack a peanut butter and jelly sandwich and an apple. I fill my Nalgene bottle with water. I put the Filson hat on my head since it’s early and cold. Then I leave my family sleeping and drive through the darkness toward the backcountry, a cup of strong coffee in my cup holder. The sun is just edging over the horizon, turning the woods into a world of gray shadows. I park at the trailhead. Get out and gear up, checking to be sure I have everything. Then I start the hike in.

It will not be a long hike, nothing that will take me into the lower reaches of the high elevation. Everything is still frozen there. I will stay near home country, along paths that by midsummer will be so well trodden as to be unremarkable, previously seen, trampled down. By then the fish here will be wary and jaded — hard to catch.

But today everything is new. Magic. It is as if I too have been reborn with the springtime. Leaving behind me the malaise of my winter life, I enter a world that glistens as it comes back from the dead.

I notice the trail: the way it stretches through the woods switching back as it moves up hill; the patchy snow that still covers part of it and stretches out into the woods. As the dawn advances, I see that there are footprints ahead of me. Because of the snow, it’s hard to tell what left them. Elk probably, or maybe mule deer. Perhaps a man or woman who beat me to the stream. That worries me. I want to be the first one out.

Soon I hear the murmur of the waterfall just above me. I will fish just down from it, just below the declivity where the upper part of the creek twists and turns and cascades into a flat area where it spreads out and forms an S as it cuts through the brown grass of a thawing meadow. I think of those footprints, wonder who or what I might find on the stream.

There is a story of a man who went into these woods. In some versions, he looks for a woman he misses like life itself. In others, he seeks wisdom, a kind of knowledge he can only find outside. In still other versions of the story, it is a woman who wanders into the woods. She seeks quiet in order to piece herself together after some horrible devastation. Or perhaps she seeks a rendezvous with a wild and passionate lover she can only find in the woods.

Whichever version of the story you hear beside whatever campfire, the person never comes back. If you know the story, if you’ve heard some backwoods storyteller recount it after a drink or two, it always comes back to you at these moments hiking alone in the woods to fish or hunt or just explore. All along the way you seek the telltale signs of this wanderer. A cave up on a hill — despite the snow, you can still see the hole. Someone could live there. Or you see footprints up ahead just like those on my trail this morning, leading on up into the high country. And you always wonder if in some strange way, you’ve come for some similar reasons: to find something lost, to escape something that has weighed you down, to search for something that can be found only in the woods. And for just a moment you wonder if you will stay.

But you know if you did, it would not last, for the woods can only look this way for a day or two. And the fish will only flash in the water until you scare them away, make them wary so they hang close to the cut bank. And so as I reach the thawing meadow and put my rod together, I forget that lost wanderer. There is no one but me here. I think only of the first cast on this cold spring morning.

My rod assembled, I secure the reel, tie on a blue-winged olive mayfly. Then I crawl to the side of the stream and study my options. A few moments later, still kneeling, I cast upstream just at the apex of a bend in the stream. It’s a ragged cast, the line falling in swaths rather than the long straight arrow I intend. I’m rusty from being inside for the winter, awkward because I’m kneeling so as not to scare the fish. Quickly I mend my line to keep it tight as it dead drifts my way. Nothing. I try again. This time the line unfurls and straightens, the mayfly hitting the bend in the stream just inches from the shoreline. Still nothing, so I reel in and cast again — another cast straight and precise.

Halfway home the mayfly disappears — not in a splash but in a quick gulp. The line stiffens. Standing now, I hold the line tight and let the fish fight. It’s not a huge fish. I can tell that. Still, the wonder is in the life of him that I feel in the motion of my fly rod, arcing it forward as I hold it taut and begin to reel in line. Robust, angry, hungry, the fish darts to the opposite shore, hangs there, pulling, fighting. I reel in some more.

By now the fish has slowed down, still fighting and jerking, but pausing here and there. A moment later, I wade into the stream and net the first trout of the season — a brown about 12 inches long. I hold the net so that the early morning light catches the color of the fish — the yellow-brown, rose-mole-flecked side, a faint sunburst of crimson on the underbelly. No matter how many trout I see, I always notice their beauty. Why is it that a creature who lives underneath the water is colored with all the hues of a woodland in autumn?

And there in that moment, in that first catch of spring, I think of those footprints, of that wanderer who came here for something lost, something forgotten, something beautiful not found elsewhere.

Well, maybe I’ll stay this time. Maybe like that man in the story, I will never go home. 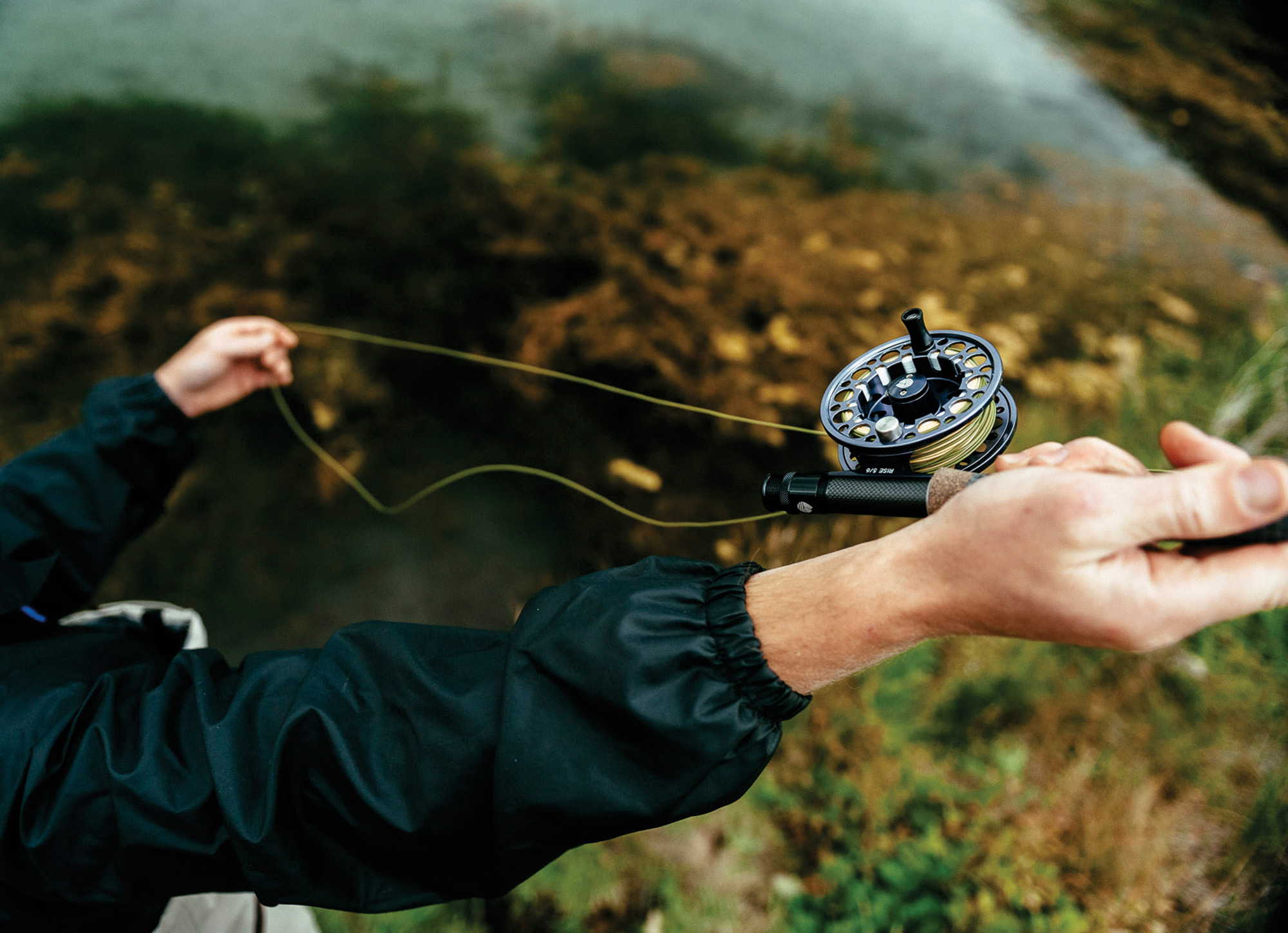