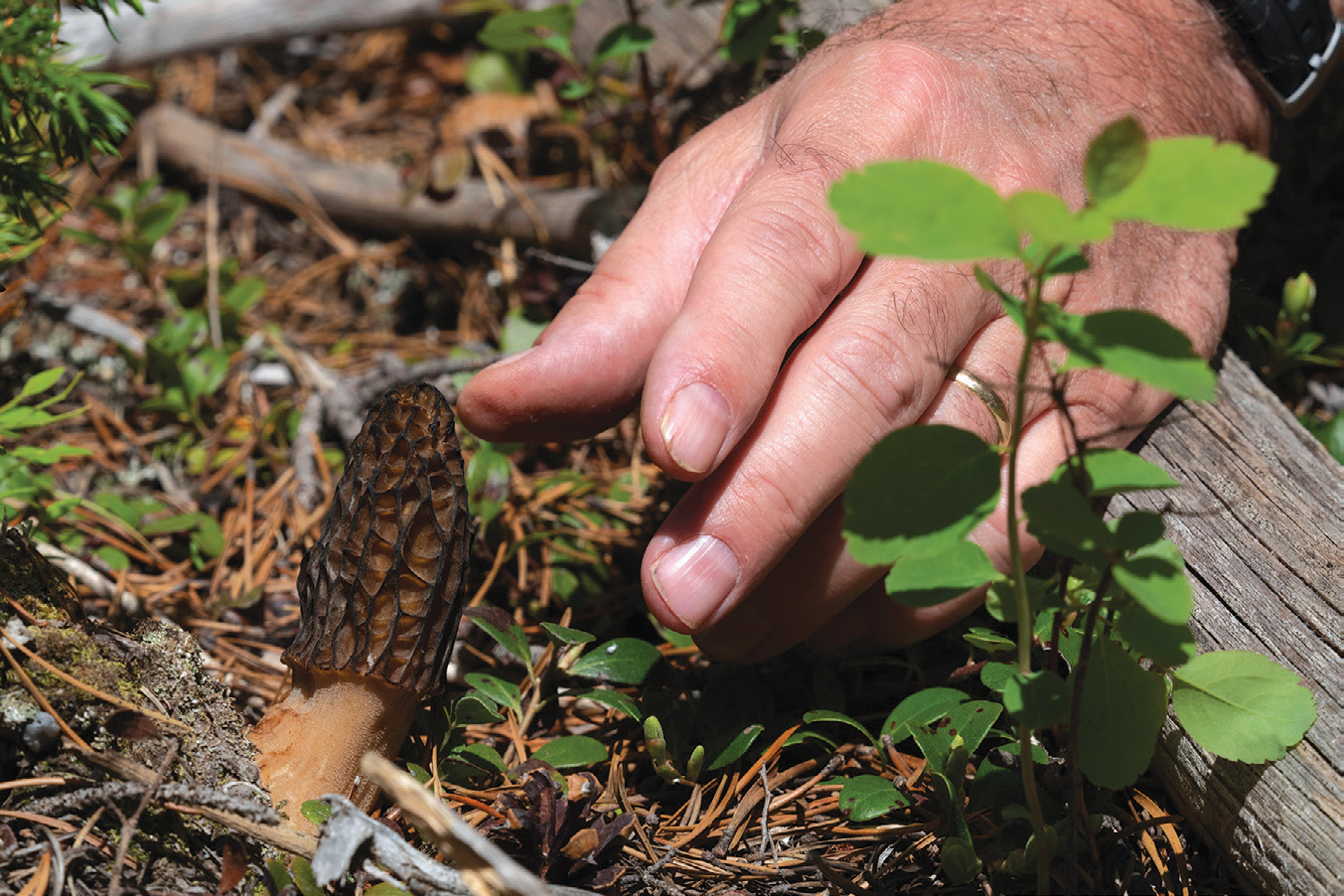 “April is the cruelest month…” —T.S. Eliot, “The Waste Land”

You can bet that poet T. S. Eliot never spent a winter in Montana. Never mind his dark allusions to death and rebirth — after all the many months of parkas and snowplows, April in Montana feels like being released from jail, as wild turkeys gobble, flights of northbound waterfowl fly overhead, and welcome traces of green appear along the receding edges of the snowline. This is the time to step outdoors and celebrate.

There are many ways to engage with the new season’s arrival, and over the years I’ve enjoyed many of them: calling turkeys into bow range; working a blue-winged olive hatch on a local spring creek; photographing lekking sharptails. None of these options means more to me and my wife, Lori, than searching for a dark, wrinkled fungus that most Montanans would walk right by without noticing.

Even experienced foragers are often reluctant to eat wild mushrooms because of concerns about potential toxicity. A basic principle for gathering wild foods reminds us to stick with what we know. During World War II, mycologist C.M. Christensen did us a favor by identifying four mushrooms that are so unmistakable, even a proverbial caveman could safely eat them. These were the shaggy mane (Coprinus comatus); the chicken of the woods (Laetiporus sulphureus); the giant puffball (Calvatia gigantea); and the morel (genus Morchella). (The use of Latin names may seem like an affectation, but so many mushrooms have confusing common names that the official version provides a useful point of reference.) 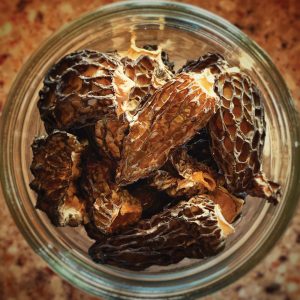 Morels are a common wild mushroom in Montana, appearing in the spring.

Several species of morel occur in Montana, but the two most common varieties are the black (M. angusticeps) and yellow (M. esculenta). Both are distinctive, medium-sized mushrooms that stand 2 to 4 inches tall, with no gills, a wrinkled exterior that resembles a prune, and a cap that attaches to the stem throughout its length. Blacks appear earlier, usually in late April depending on the temperature and moisture levels, and they’re most often found above 5,000 feet in elevation. Yellows usually erupt a week or two later and are more common along river bottoms, often near cottonwood trees. May is the peak month for morels in most of Montana, although some blacks may persist at higher elevations throughout the summer. And some enthusiasts are known to prefer the taste of black morels.

Morel mushrooms are the fruiting bodies of a huge underground plant composed of thread-like mycelia. That’s why a location with morels one year is likely to be productive again for years to come. While these underground plants may be largely invisible, they deserve respect from pickers, and it’s important to cut the mushroom’s stem off above the ground rather than pull it up. And picked morels should be carried in a porous mesh bag to allow for the dispersal of spores as you walk.

A successful morel hunt must begin at the right place, at the right time. While morels occupy a wide range of habitats, old burns are especially productive, as are areas of disturbed soil like old roadbeds. Soil temperature is an important indicator of when to start looking, as morels rarely sprout from ground that’s colder than 40 degrees, and 55 degrees is optimal. The ground should be moist but not saturated, and in a dry spring, an overnight rain will often mean that they will appear in the next day or two.

Morels are generally more abundant in Western Montana because of the moister climate and abundance of large burned areas. However, I’ve found plenty of them east of the Continental Divide. One advantage of hunting morels in less obvious areas is the lack of competition. High market prices have created commercial demand, and popular burns on public land can become crowded and cherry-picked. Even non-commercial pickers are now required to get a free permit to hunt for them on national forest lands, and it’s best to consult the nearest Forest Service office before heading into the field. 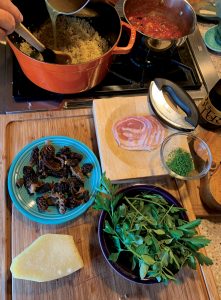 Preparing morel risotto can be a pleasant way to relax after a long day in the field.

Don’t expect anyone to give you GPS coordinates to their favorite morel patches, not even your best friend. These are closely guarded secrets, and it’s considered rude to request information more specific than the general location or elevation. No one will tell you the truth anyway, so don’t bother asking.

Despite the ease of identifying them and their favorable safety profile, some caveats apply to morels, as with all wild mushrooms. Some morels may contain heat-labile compounds that can cause gastrointestinal distress for some, so they should always be cooked prior to consumption. Perhaps inevitably, there is a false morel (genus Verpa) that superficially resembles the real thing and can cause moderate toxicity if consumed. In contrast to true morels, the false ones have stems that attach to the cap only at the top. It’s an easy distinction if the mushroom is sliced open lengthwise, but if in doubt, consult an expert.

What do hunters do with morels once they’ve brought them home? It’s recommended to rinse the haul gently in a colander under cold running water, then allow them to air dry on paper towels. At some point prior to cooking, I usually slice them open longitudinally to be sure that I haven’t carelessly picked any false morels, and also to allow them to lie flatter in the pan.

The easiest way to prepare fresh morels is to sauté them in butter over medium heat with a dash of salt and black pepper. Expect them to shrink, and, remembering Julia Childs’ admonition against crowding mushrooms as they cook, use a pan that’s large enough so they don’t touch each other while cooking. This simple preparation makes for a wonderful accompaniment to any meat dish, especially venison. And because morel gathering usually coincides with wild turkey season, our family likes to combine the two in a traditional celebration of spring. 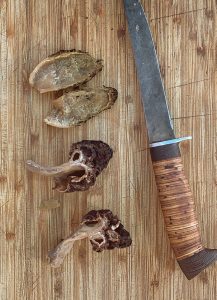 Sliced longitudinally, the true morel shows no separation between the stem and cap, in contrast to the false morel.

With luck, you’ll likely have more morels than you can eat in one sitting. There are a number of ways to preserve the excess without compromising quality, including vacuum-packing them whole and freezing them, or drying them on cookie sheets in the oven. These days, we prefer to use a dehydrator. And once the mushrooms have dried, we place them in a sealed glass jar in the back of a cupboard, and they should be fine until next year’s crop sprouts.

Preparation
Soak morels in 1 to 2 cups of stock until they’re reconstituted, then strain them and reserve the liquid. Dice the onion and prosciutto, and separate the prosciutto pieces to prevent them from clumping. Slice morels lengthwise. In a large, heavy saucepan, sauté the onion, morels, and prosciutto in oil and butter for 5 to 10 minutes over medium heat. Add the rice and stir thoroughly. Next, add the liquid from the strained morels, and stir over medium heat until it’s absorbed. Add the remaining stock, one cup at a time, stirring frequently, then add the wine and grated cheese with the last cup of stock, stirring until all of the liquid is absorbed.