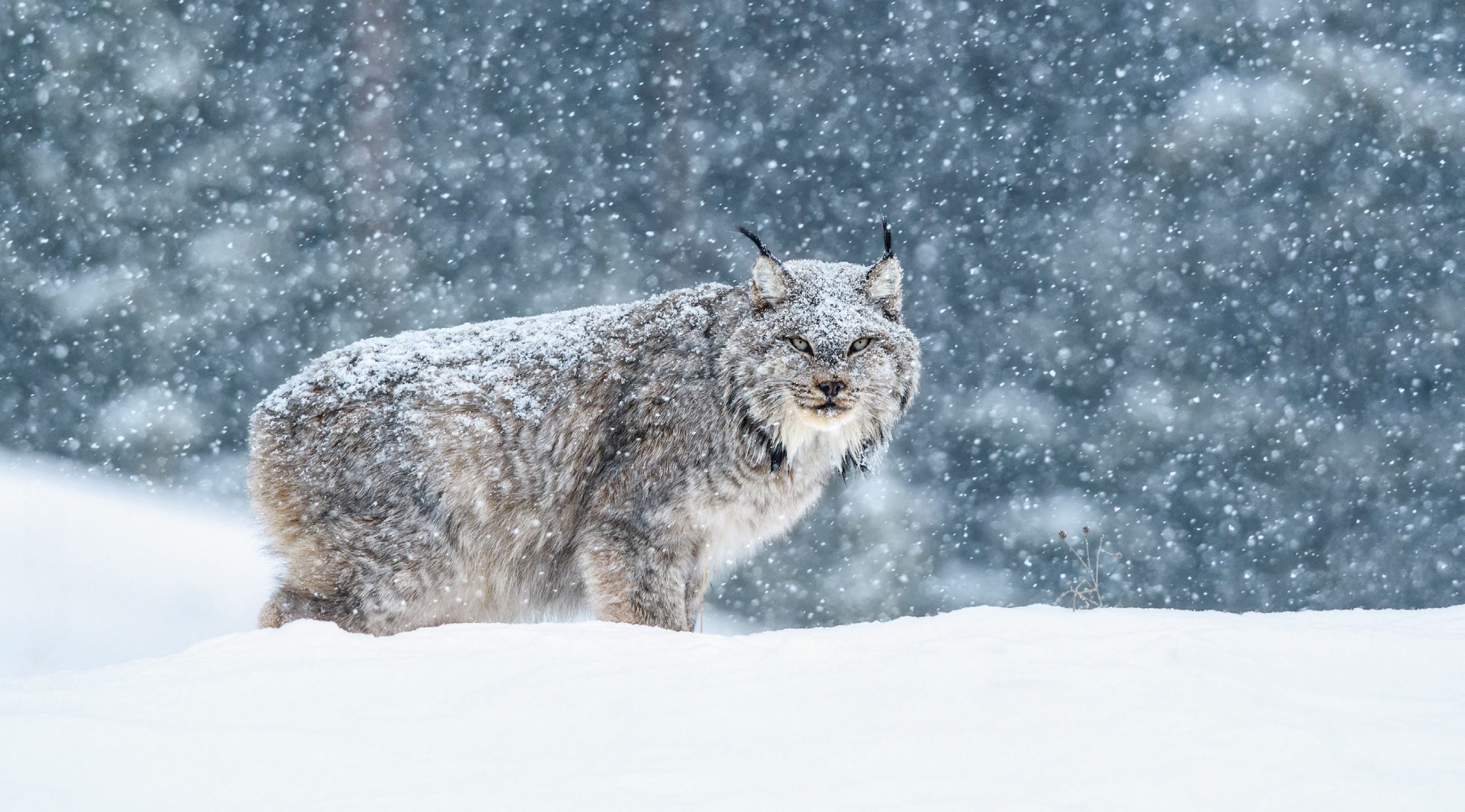 Calm air, clear azure skies, and a uniform blanket of white covering the entire landscape, save for the lower branches of the pines; I didn’t need a thermometer to tell me it was a sub-zero day and, because of that, I was pretty sure there wasn’t another human being within miles. A perfect pattern of weather events had created ideal animal tracking conditions: an ankle-high base of old snow with a thin, icy crust topped by an inch of fresh powder. The record of the previous night’s wildlife activity I had crossed by then included the elk and mule deer tracks I’d expected, along with a porcupine’s lazy drag marks, and the delicate etching of a grouse’s flight primaries where it had taken to the air. I walked in circles for 10 minutes, trying to determine what had flushed the bird.

Then I cut the cat track. Learning the distinction between feline and canine tracks is one of the first challenges a Montana winter tracker faces, but with experience the difference becomes obvious, at least in good snow conditions. My first impression of this one was that it had been left by a female cougar, but something didn’t look right. I followed it carefully, my eyes alert for clues. 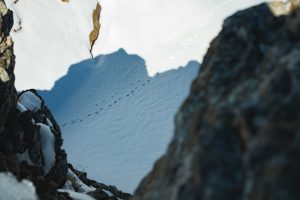 These coyote and wolverine tracks were spotted in a wilderness area in Western Montana. The two carnivores often follow each other, hoping one will lead the other to a carcass.

The process of identifying a strange track reminds me of a common tactic I often used when faced with an uncertain situation during my medical career: constructing a differential diagnosis. This consists of making a list of everything the problem could be, followed by discarding possibilities one at a time based on the evidence. “When you have eliminated the impossible,” as Sherlock Holmes once pointed out, “whatever remains, however unlikely, must be the truth.” That principle applies equally well to mysterious illnesses and unusual animal tracks.

When I followed the tracks under the tree canopy where the powder had been sheltered from the previous night’s wind, the prints looked crisp and concise and definitely belonged to a cat, which left a limited number of possibilities. The stride seemed short and narrow for a lion, but the prints were too large for a bobcat or feral housecat. Then I realized that whatever had left its mark hadn’t been breaking through the thin crust beneath the powder. Dropping to my knees, I tested the strength of the crust with my fingertips and confirmed that a cougar should have been breaking through. Hmmm… A cat with a print the size of a cougar’s, but an animal a fraction of a lion’s weight. Voila! I was on the trail of a Canada lynx. 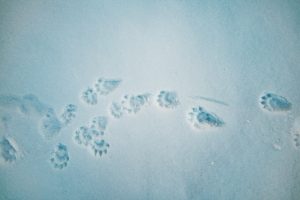 Wolverine tracks can leave clues about this elusive animal’s behavior.

I had occasionally seen lynx when I lived in Alaska, but even there, close encounters were rare. I’d never seen a lynx in Montana, but there was a clear record of one’s passage right in front of me. I like to think of tracking in terms of simple geometry: An animal is a point, but its track is a line that can extend for miles. It’s obviously easier to spot the latter, especially when the animal is taking evasive action at the first indication of human presence. Such are the joys of tracking, and there is no better time to do it than during winter, when the snow is eager to tell the observer so much about local wildlife.

I admit that I’m addicted to winter tracking. To the concern of family and friends, I’ve been known to slam on the brakes while driving down a snowy road at 50 miles per hour just because I thought I spotted an unusual track. Granted, a lot of this enthusiasm developed from hunting experiences, but non-hunters need not worry. No animals were harmed in the course of this essay. That’s a large part of tracking’s appeal: You can enjoy the process and learn a tremendous amount about wildlife no matter what your intentions toward whatever you’re following. 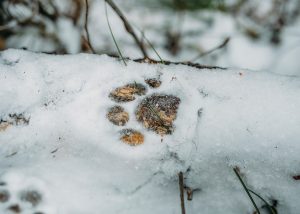 A mountain lion print was left behind after it walked across a fallen log.

Unless you’re an avid skier, it’s easy to avoid the outdoors during a high-country winter. Since I would prefer to do something during the cold months besides read, write, tie flies, and gain weight, I’m always looking for excuses to get into the mountains. The backcountry is beautiful then despite the cold, and there is never a better time to enjoy it in solitude. Tracking provides a great excuse, and opportunities are never farther away than the nearest national forest.

Over the years, I have tracked all kinds of wildlife across all kinds of surfaces, ranging from sand to pine-needle duff to open tundra, sometimes down on my hands and knees looking for nothing more obvious than bent blades of grass or disturbances in the dew. I’ve even enjoyed the process in the company of the world’s best: Africa’s Kalahari Bushmen, for whom tracking is literally a way of life. Those experiences have left me with a deep appreciation for fresh snow, which we enjoy in such abundance in Montana that it would be a shame to overlook all that it has to tell us. 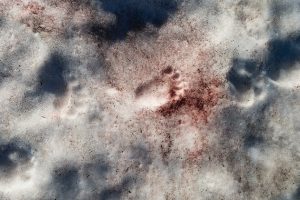 This grizzly track stands out in the “watermelon snow,” a phenomenon in which the snow turns pink due to algae.

Sometimes tracking can serve a practical purpose. When dog food started disappearing from an overturned container beside the kennel that houses my bird dogs, a late October snowfall allowed me to identify the culprit as a black bear and chase it out of the coulee behind the house before it became habituated to free lunches. Tracking has allowed me to stay in shape over the course of many long winters, gain unique insights into wildlife behavior, and “see” unusual birds and animals, including a wolverine in addition to the lynx described earlier.

There is no more dramatic story in nature than a predator killing its prey, even if the event is nothing more involved than a raptor pouncing on a rabbit. Seeing one large mammal kill another in real time is a rare event, such as when I once watched a grizzly kill a moose when I lived in Alaska. However, tracking has led me to many kill sites, where snow has told stories as easy to read as an open book. Want to know how a 100-pound cougar kills a full-grown elk? Follow enough tracks, and the snow will tell you. Shakespearean tragedy or just another day in the woods? Such events contain elements of both. 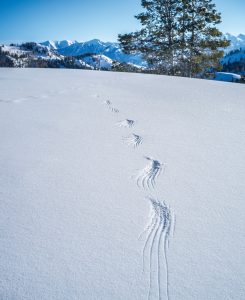 In Idaho’s Smoky Mountains, a spruce grouse left behind wing tracks in the snow.

Tracking has also allowed me insights into unusual wildlife behavior that I never would have imagined otherwise. One such day began with a cougar track in the snow, followed by an enigma. Interpreting the signs we saw demonstrates how tracking can illustrate unexpected aspects of Montana’s wildlife behavior.

The conditions weren’t optimal — warm winds had turned the snow to slush on the south facing slopes. Confusing “snow tracks” left by clots of melting snow that dropped from the trees dotted what powder remained. My two friends and I had to cast about frequently whenever the track disappeared on a stretch of rock where all the snow had melted, and we once lost it temporarily where the lion had climbed upward through a rocky cliff. The track belonged to a small cat, likely a young male.

We had covered a mile or two after regaining the track, when I noticed something interesting in the snow ahead: a long drag mark running downward along the fall line. My first thought was that the cat had killed a deer and skidded the carcass down into the trees to hide it from scavengers, but there was no blood or hair along the disturbance in the snow, which held intermittent jumping cat tracks. We followed the sign down the hill and found what I can only describe as a giant snowball. After climbing back to the beginning of the “drag” mark, we saw where the lion had used its paws to dig up snow and pack it together.

Farther along the sidehill, we found two areas similar to the first, with a sphere of snow at the end of each. The cat had evidently spent the morning building snowballs and chasing them down the hill. Was it practicing its attack technique, working out, or just having fun? The signs didn’t allow us to determine its motivation. We never saw the lion either, but we didn’t have to. The snow had left a clear record of a cougar engaging in behavior that would have been virtually impossible to observe in person. That’s why I love to spend my Montana winters on foot in the hills, reading the white pages. 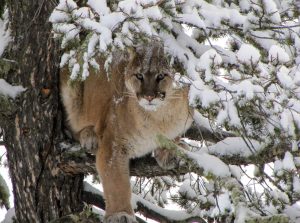 Animals that are rarely seen in person, such as the mountain lion, can be tracked more easily in winter.

Opportunities to track winter wildlife abound in our area, on public land, with no license or special equipment required except a daypack with winter survival gear and perhaps a pair of snowshoes or cross-country skis. Tracking skills are best developed through experience. As a useful exercise, one can simply start out on the track of a common animal, like a deer, and follow it until you lose the trail or find what made it. However, useful resources are available including the excellent Field Guide to Tracking Animals in Snow, by Louise Forrest (now Louise Davis).

Exercise, solitude, mountain scenery, and an opportunity to learn more about wildlife… Who could ask for anything more?