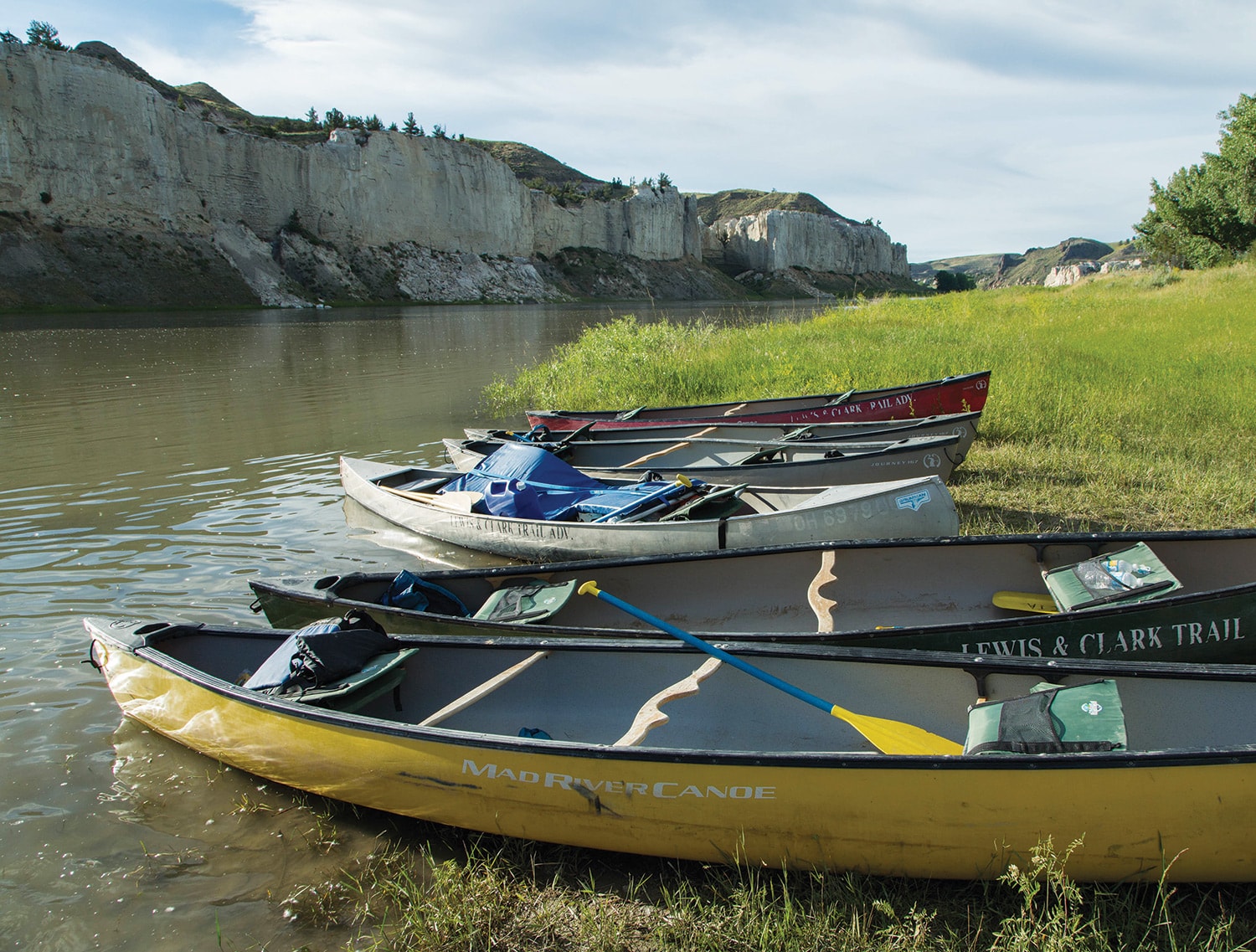 A group of 10 mothers and daughters followed in the paddle strokes of the Lewis and Clark expedition on a three-day, 45-mile adventure.

07 Jun In the Slipstream of Lewis and Clark

ON DAY ONE OF A 45-MILE CANOE TRIP through the Upper Missouri River Breaks National Monument in Central Montana, our group of 10 moms and daughters found ourselves standing before archaeologist Kevin O’Briant. We were gazing at an ancient rendering of a horse — perfectly preserved and instantly recognizable, down to its narrow, pointy ears — on the smooth cliff face behind him. Below us, the scrubby hills gave way to the river’s edge half a mile away where the Missouri River silently flowed by.

Clearly this would have been an excellent 18th-century vantage point for a scout seeking game while simultaneously watching the river for unexpected company. Native American tribes made great use of the Missouri — as a highway and a source of sustenance — for millennia, but when Captain William Clark and Lieutenant Meriwether Lewis led the Corps of Discovery upstream through this region in 1805, and returned downstream in 1806, they saw nary a soul. Our group had come to follow in the paddle strokes of the expedition — though we opted for the leisurely downstream route while forgoing the cumbersome keel boats, trading goods, rifles, ammunition, and scientific tools, as well as the French guide, his interpreter wife, and their baby. 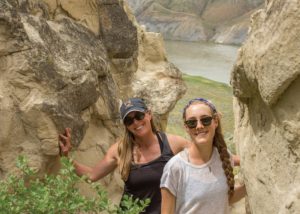 The author and her daughter.

The presence of Sacagawea must have helped assure the safety of the group. Just because the Corps didn’t see anyone didn’t mean they weren’t being watched warily. But due to the presence of a woman and baby, the theory goes, they weren’t perceived as a war party, and this saved their lives. “They were the linchpin of history, in a way,” says O’Briant. “Without her they would have been killed; they just wouldn’t have made it.”

Our first night on the river, we had a wide-ranging conversation, the kind one imagines taking 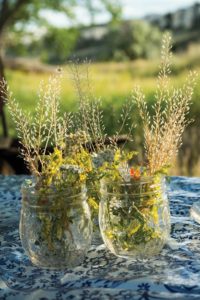 place around a campfire after a day of outdoor exertion, education, and sun exposure, followed by a hearty meal and some wine. We talked about the loss of cottonwoods due to flood control; veganism; concretions (spherical balls formed by layers of sand, sometimes bearing leaf imprints, that fall from slot canyon walls); one daughter’s screenplay about a group of women in the wilderness; and the sobering fact that the Lewis and Clark expedition had to fight the current the whole way up the river (some members of the Corps of Discovery couldn’t even swim).

A.B. Guthrie Jr., in his writings about the Platte River in 1846, said, “He couldn’t believe that flat could be so flat or that distance ran so far or that the sky lifted so dizzy-deep or that the world stood so empty.” He could have been writing about the Missouri Breaks today, where you can travel three days by canoe in the height of summer and glimpse only a few other people. The quiet is as big as the sky, broken only by the soft sounds of the river and the occasional warbling or wing-thrum of avian life. The broad Missouri rolls serenely through open country, a landscape dotted with sagebrush, punctuated with cottonwoods, and crisscrossed with deer, coyotes, and birds. Gentle, rounded hills rise on both sides, islands appear and recede, until the White Cliffs of the Missouri Breaks loom: 300-foot-high palisades lining the north side of the river, in places reflected back toward the south side. 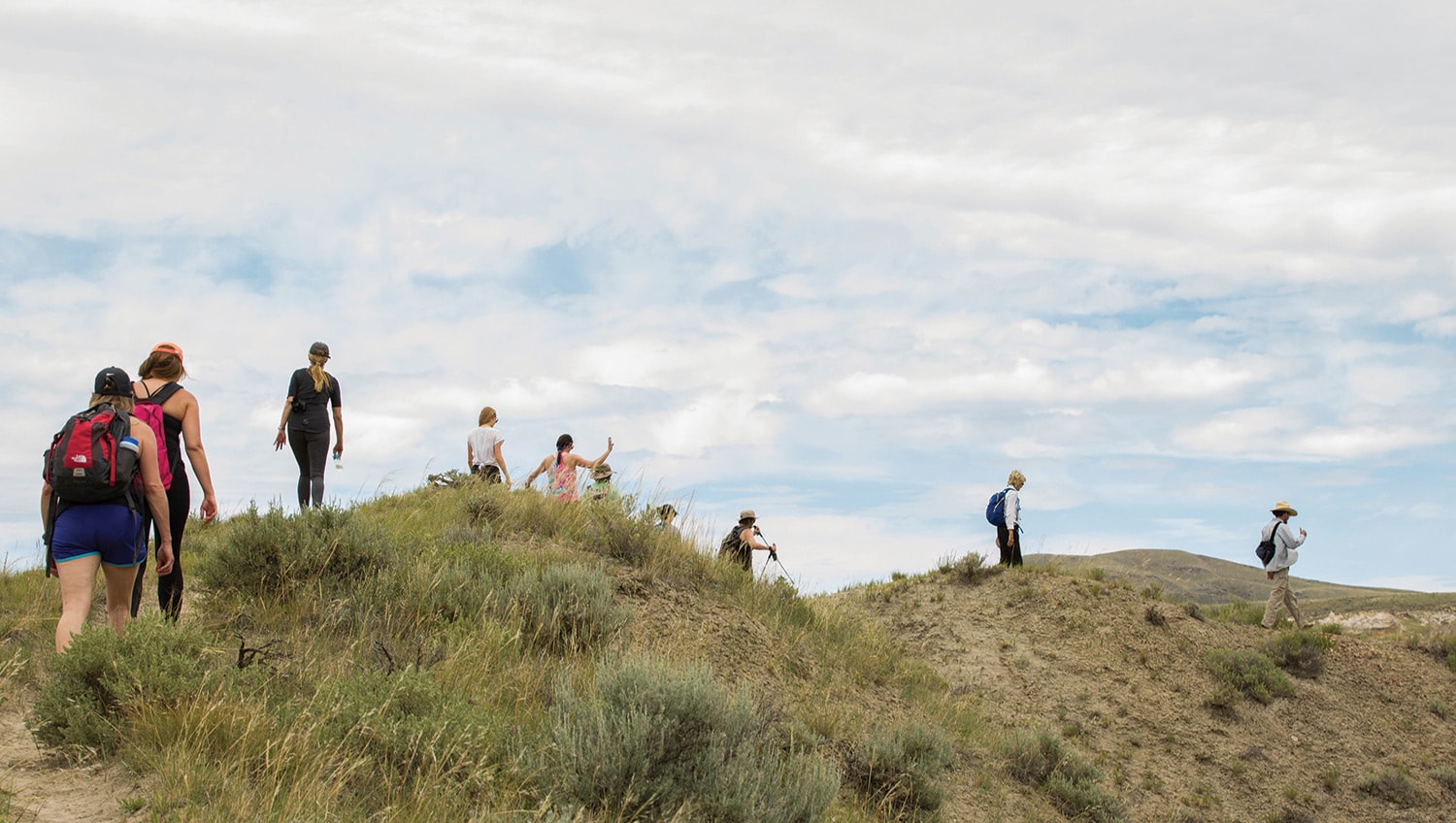 Each day, steady but relaxed paddling was interspersed with hiking, swimming, and exploring, which included searches for tipi rings, pictographs, and homesteaders’ cabins.

This smooth-flowing river was the perfect setting for our all-girl group to jump into the slipstream. Granted, our guide was a guy, but O’Briant had a low-key attitude toward trip leading. (There were no timetables, for instance, which allowed us to simply show up, ready to go, an approach that inevitably got us to our destinations in good time.) This, plus his deeply informed, ego-free way of addressing the topics at hand, was perfectly suited to a group that had done its research, and was prepared and excited to camp out. Along with that, we enjoyed an educated give-and-take (O’Briant, of course, doing more of the giving) on geology, botany, Plains Indian culture, the fur trade era, the search for the Northwest Passage, and the way in which the quiet, competent, uncomplaining Sacagawea saved the expedition merely by being a part of it. We could be ourselves in the wilderness, one moment asking questions, the next minute quietly taking in the scenery, the next engaged in one-on-one conversations about deeply personal topics with people we had only just met. For the mother-daughter pairs — the moms new empty nesters, the daughters young adults just setting out on their independent lives — it was a chance to experience our relationships in a new light as we navigated the river in tandem, paired in our canoes. 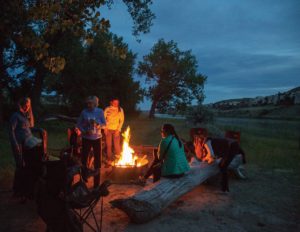 This was easy country to enjoy. Rich with pictographs, tipi rings, slot-canyon labyrinths, and otherworldly gardens of pedestal rocks topped with oversized iron-rich capstones, the Breaks region is scenic, historic, and not terribly hospitable. And though not a whitewater-lashed, boast-to-your-friends-on-Instagram experience, several days of stress-free paddling in perfect weather offered a paradisal opportunity to connect with friends, daughters, and self while experiencing a West that, if not exactly pristine (the Missouri’s vitally important cottonwoods, for instance, are threatened due to flood control), seems a place where time has stood still.

The group initially met up in Great Falls, Montana. Moments later, O’Briant indulged us in a 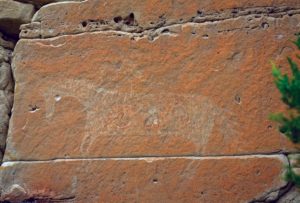 detour to the famous Sip ‘n Dip “Mermaid Bar” (sadly, the mermaids were off duty) en route to Fort Benton, in its heyday the northernmost trading post on the Missouri River. There, the recently refurbished Grand Union Hotel lives up to its National Register of Historic Places designation, with pressed tin tile ceilings, ornate exterior brick ornamentation, and a sprawling registration desk original to the 1882 building. From this vantage point, hard on the banks and just upstream from a monumental sculpture of a frontiersman, the river looks big, broad, and, in the rosy glow of a balmy summer evening, inviting.

In the morning, Wayne Fairchild, founder of our tour company, Lewis & Clark Trail Adventures, chatted with us on the bumpy school bus ride as we rattled 45 miles downriver through open country punctuated by vast fields of spring wheat, chickpeas, and barley, great swaths of yellow mustard, the occasional prairie dog colony, and glimpses of deer, cattle, and bison. After making a stop at Decision Point (the confluence of the Missouri and Marias rivers — where in June 1805 the Corps spent 10 days trying to decide which route would lead them to the Northwest Passage), we continued to the put-in at Coal Banks Landing. 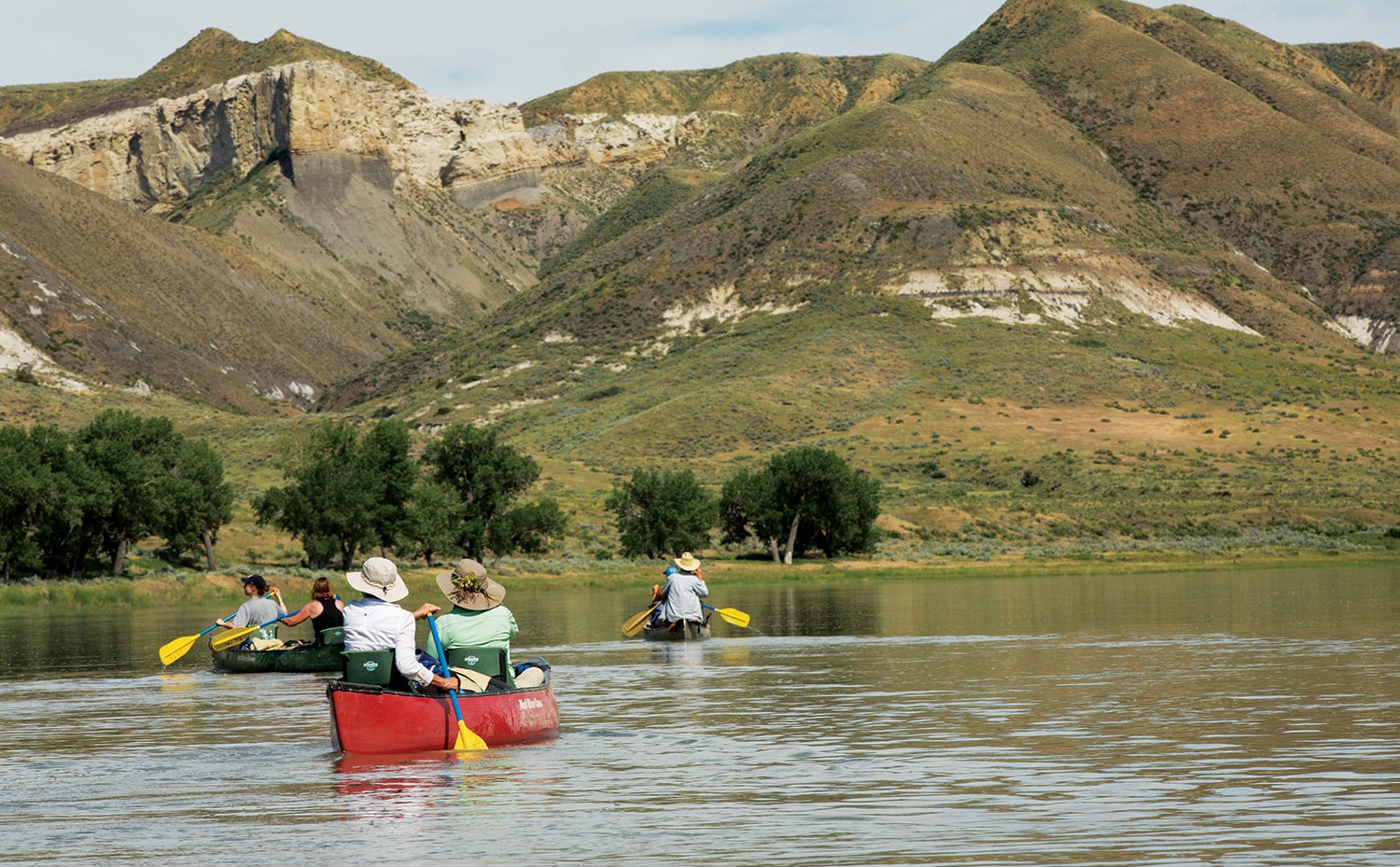 The trip began with an overnight stay in Fort Benton, Montana, a historic trading post on the river, before driving 45 miles downstream to the put-in at Coal Banks Landing. From there, it’s not long before rolling hills give way to the famous White Cliffs of the Missouri Breaks.

The lack of rules and dire warnings regarding life preservers was refreshing (in this outfit, the competent can function as adults), and a sure indication that the Missouri is not particularly treacherous. We set out, my daughter and I, paddling without urgency and letting the river carry us along when we rested our paddles. After an initial discussion over who would take what position (she took the bow, the right move for a teen as she didn’t have to look at me, and I could photograph her surreptitiously), and the occasional critique over paddling styles, the embarking and disembarking needed no words, nor did much of the journey; we’d alternate hopes-and-dreams conversations with the mundane and random, punctuated by silences spent relaxing into the power of the scenery and the draw of the river. We traveled 15 miles that first day, stopping once at an open, grassy lunch spot, and again to clamber among the wildly formed hoodoos at the end of the first long section of cliffs, where we hiked a narrow slot canyon. 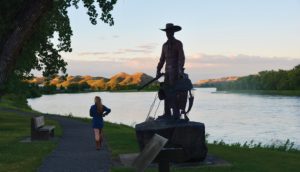 We pulled in at Eagle Creek, where the Corps spent the night of June 1, 1805. Certainly they did not find their tents already erected as we did, lined up in military precision in an immense natural meadow of tall grasses, lined with cottonwoods, edged with sagebrush hills, and flanked by banks of cliffs, now aglow in the evening light. They also did not have the luxury of a two-hour hike and a chance to pair off, clean up, compare sunburns, and exclaim over the size of the capacious two-man tents while an enthusiastic trio of helpers cooked their dinner. 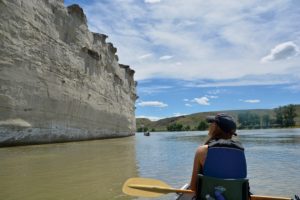 Sandstone cliffs rise vertically from the water’s edge. In 1805, these cliffs forced an arduous upstream slog for the Corps of Discovery; today they constitute the perfect backdrop for a leisurely downstream paddle.

It’s true that Lewis and Clark were in a habit of scampering around the countryside, conducting experiments, gathering specimens, and making detailed notations on everything from weather to wildlife while the men of the Corps did the backbreaking work of dragging the bull boats upriver, often chest deep against the current, in treacherous footing right below the very cliffs we had just lazily drifted beneath (“The longest schlep in the history of schlepping,” O’Briant called it). For every member of the Corps, though, the views would have been uplifting, the yellow-white palisades marching more or less unbroken for half a mile at a time. O’Briant read us Lewis’ description of the Missouri Breaks from his journal; detailed, lengthy, and poetic to the point of rhapsodic.

For two more days and through one more Corps of Discovery campsite (Slaughter Creek, named for a nearby buffalo jump), the scenery continued unabated as the cares of the developed world receded. We journaled, photographed, learned about edible plants and geology, watched white pelicans and a golden eagle, challenged our fear of heights on precipitous rocky hikes, shared life stories around the campfire, explored ancient tipi rings, whispered after dark in mother-daughter pairs from the comfort of our cots, peered into a homesteader’s cabin, admired the stars, paddled, and simply drifted, tension-free, letting the wide Missouri carry us and our musings downstream. 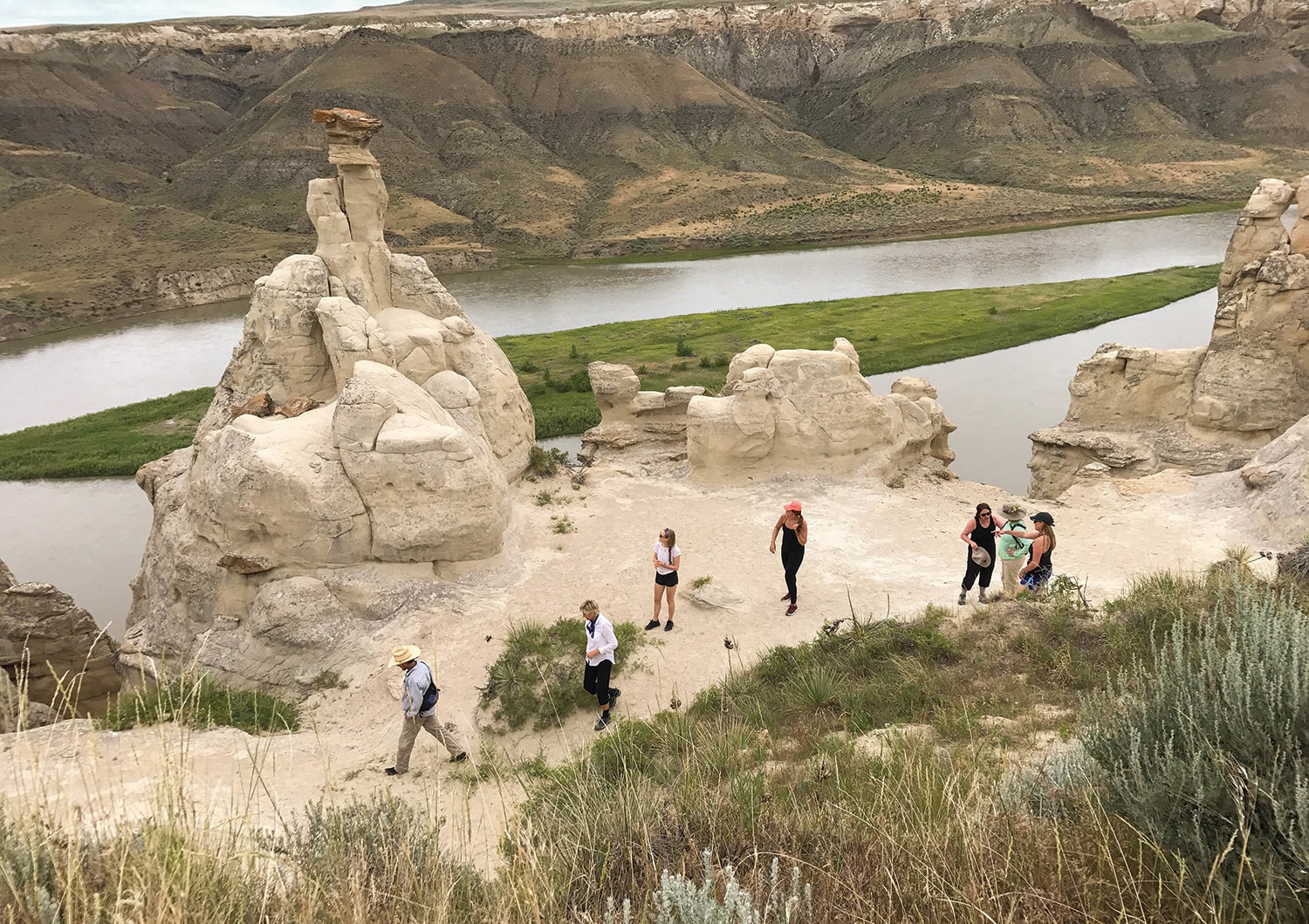 The Missouri Breaks scenery is punctuated by hoodoo formations topped by iron-rich capstones. From elucidating the geology, flora, and fauna to reading aloud from the journals of Lewis and Clark, trip leader and archeologist Kevin O’Briant had an encyclopedic knowledge of the area. 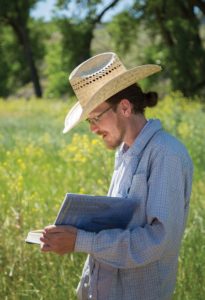 After 46 miles, as we pulled the canoes ashore at Judith River (named by Clark for his cousin), what I remembered most vividly about the trip was one ethereal moment halfway through our second day. We had stopped for a break on a cliffless stretch of river, perfect for swimming. As the nine other women — representing seven states and newly fused in friendship, all gamely entering into a new phase of their mother-daughter relationship — splashed away the grime of the journey, I found a broad, smooth cottonwood trunk stretched across the grass underneath arching branches. I laid down and relaxed, perfectly balanced on the weather-smoothed trunk, lost in reverie, hovering on the brink of sleep. The sounds of laughter drifted up from the river, my own daughter’s voice mixing merrily with those in the group, while the cottonwood leaves shimmered green and flashed against the blue of the sky.

It’s been a great trip when one moment achieves perfect transcendence. Lewis put it best when he wrote, “…As we passed on, it seemed as if the seens of visionary inchantment would never have an end.”

No matter how profound the experience, though, you ultimately end up downriver. On Day Three, the Breaks scenery receded from view. But for the moms and daughters on the trip, the “seens” of “inchantment” wouldn’t end; they’d continue on, casting their glow over each family’s journey.