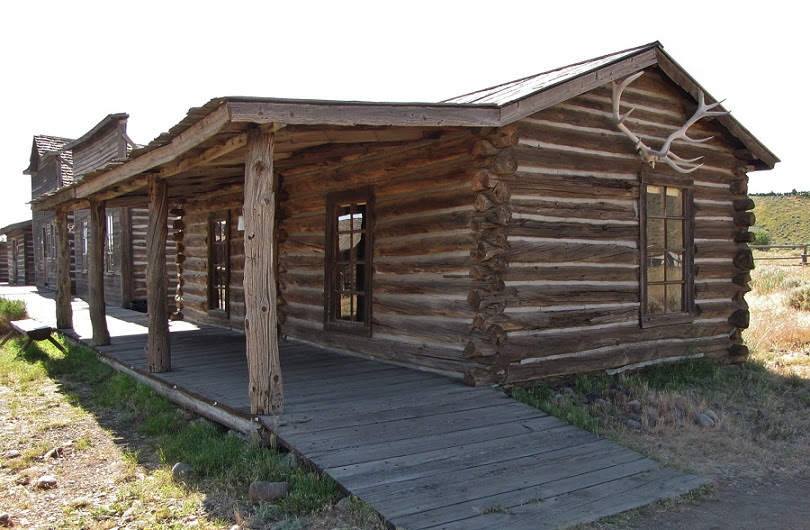 The Hole in the Wall Cabin at Old Trail Town.

27 Aug Six Experiences You Can Only Have in Cody Yellowstone

When fall comes to northwestern Wyoming’s Yellowstone Country, the rugged region transforms from a family vacation hot spot to an adventure-rich adult haven that is unlike anywhere else in the world.

“In the fall, families return to their school-year obligations and we welcome a more mature and adventurous crowd,” said Claudia Wade, director of the Park County Travel Council, the tourism marketing arm of the region. “They come for the outdoor recreation, colorful landscapes and abundant culture and history. And because of the region’s authentic Wild West roots, our fall visitors are also sure to experience some quirky surprises as a vacation bonus.”

Founded by Buffalo Bill Cody in 1896, Cody is the only Yellowstone National Park gateway that opens to two park entrances – the east and northeast – and its location in a mountainous valley offers a rich array of outdoor adventures like blue-ribbon trout fishing, endless hiking, equestrian trails, rock climbing and scenic byways for road-tripping. The region also boasts  wildlife such as elk, bison, bears, wolves, moose, bighorn sheep, eagles, river otters and coyotes. Fall is mating season for many species, so it is common to see wildlife in action throughout the the region’s valleys and canyons, and sometimes even right along the road.

Here are six fall adventures that travelers can have in Cody Yellowstone Country and nowhere else on Earth.

1. Hear an elk bugle in the valley that bears its name

Cody-based road-trippers enroute to the east entrance of Yellowstone will pass through Wapiti Valley. “Wapiti” is the Cree Indian word for elk, and these white-bottomed creatures from the deer family have obligingly continued to populate – and repopulate – their namesake valley. Fall is mating season, and elk take their procreation duties seriously.  Like the Instagramming humans who observe them, elk like to “share” their experiences too – by bugling about them. The shrill, ancient sound made by a male elk in rut reminds visitors in a goose bump-inducing way that Yellowstone Country remains one of the wildest places in the world.

2. Stop by Buffalo Bill’s hunting lodge and see a Crazy House, Chinese Wall and Colter’s Hell along the way

The Buffalo Bill Scenic Byway is a curious road-tripper’s dream route. Travelers pass a dilapidated, multi-story structure  – often called the Crazy House – that was the inexplicable passion of an obsessive local builder who died when he fell from one of the rickety balconies on a windy day. Along the route drivers will also pass rock formations with descriptive names like “Chinese Wall” and points of interest such as “Colter’s Hell.” Just outside the park entrance is Pahaksa Tepee, Buffalo Bill’s hunting lodge, where he entertained high-profile guests like the Prince of Monaco.

3. Fire an 1873 Winchester Rifle – the gun that Bill Cody used to hunt bison – and then buy one

The Cody Firearms Experience is an indoor shooting range with a selection of replicas of significant guns throughout history and a range of shooting packages. Just a short drive away is the Cody Firearms Museum, one of five museums under the roof of the Buffalo Bill Center of the West. The museum is undergoing a major transformation this year, and it has partnered with Navy Arms and Winchester Firearms to recreate 200 Winchester Model 1873 lever-action rifles. A limited number are available for sale to benefit the museum.

Choosing to remain with her Japanese-American husband when he and 14,000 Americans of Japanese descent were incarcerated at this camp outside of Cody, Estelle Ishigo chronicled camp life in a series of sketches, drawings and watercolors.

5.  See the Hole in the Wall Cabin and visit the bank Butch Cassidy refused to rob

One of the 26 authentic frontier buildings in Cody’s Old Trail Town was used as a hideout by Butch Cassidy and the notorious Wild Bunch during their train- and bank-robbing heyday. There was one bank in the region that was perfectly safe, though. Promising never to rob it, Butch Cassidy encouraged his friends to stash their cash at the Meeteetse Bank. Now part of the Meeteetse Museums, visitors can still view an original bank teller’s cage and other period artifacts.

6. Motor through valleys of plenty all in one day

In one long and visually stimulating day, travelers can pass through Yellowstone’s multiple wildlife-rich valleys including the park’s Hayden and Lamar Valleys; see a series of rugged mountain peaks; pass lakes, rivers and streams and see the waterfall that inspired the creation of the world’s first national park. By entering the park via the east entrance and exiting the northeast entrance to return to Cody, travelers can experience much of the 2.2 million-acre park’s most famous sights and landmarks all in one day.

Home of the Great American Adventure, Cody Yellowstone is comprised of the northwestern Wyoming towns of Cody, Powell and Meeteetse as well as the valley east of Yellowstone National Park. The region is known for rodeos, authentic guest and dude ranches, world-class museums and recreational adventures that reflect the adventurous spirit of the visionaries and explorers who brought the remote region to the world’s attention.