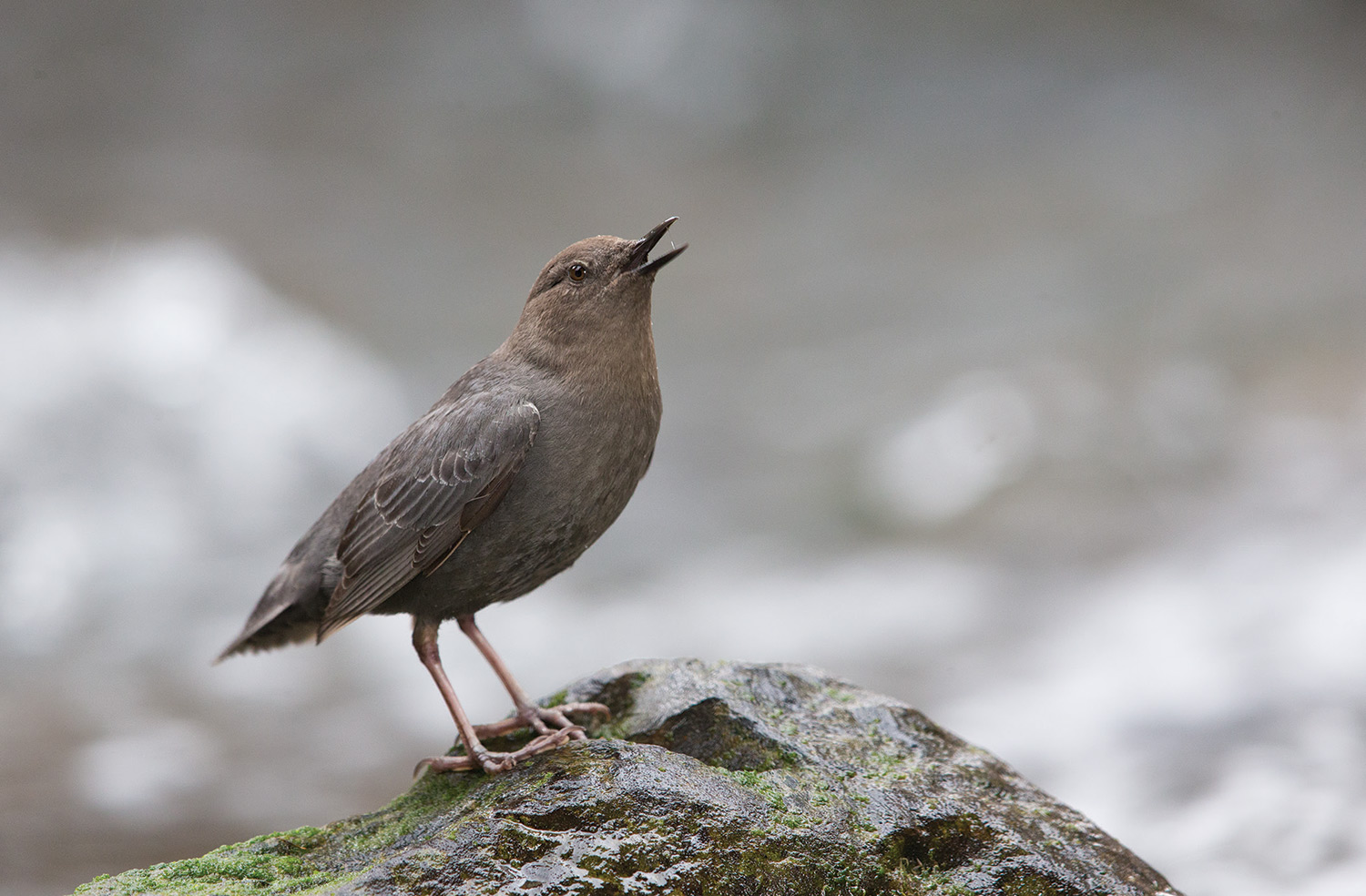 30 Nov Singing Though the Heavens Fall: In Praise of the Dipper

It’s been nearly a week of frigid, blustery weather — shoveling and re-shoveling, plowing and re-plowing, snow scuttling away and then coming back around, swirling up the benches on both sides of town and then down again, pushed by giant snorts of wind. It’s wrestling season, that annual contest between winter and early spring, and right now winter seems the better bet. Our once-giant pile of firewood is dwindling. We just ran out of coffee. But happily, even with all that, from the back window of our home on the aspen-tossed banks of Rock Creek near Red Lodge, Montana, through an unhinged swirl of snowflakes, I can see the arrival of my mood coach: a rather plain little bird, the dipper, jumping off blocks of ice to pluck larvae from the bottom of the creek, then back up onto the ice again where she bobs up and down for a time, looking like a little kid about to wet her pants because she’s got something really important to say.

In the brilliant landscapes of the Greater Yellowstone — filled with moose and bear and wolves and elk and bison and pronghorn, eagles and osprey and red-tailed hawks and pelicans and swans — it might seem odd to gush about a drab, gray, 8 1/2-inch bird; a bird so lackluster that the Irish, who aren’t exactly short on poetic images, once referred to it as “the blacksmith,” thinking its appearance similar to that of a farrier covered in ash and soot at the end of a long day at the forge. Of course, like everyone else, I’m thrilled to run across the more charismatic, more beautiful creatures of this region. But it’s the dipper, armed with her glorious attitude, that cheers me most often.

Now I fully understand that honoring a bird for her attitude puts me several feet over the line of so-called anthropomorphizing — the act of casting human qualities onto animals — which in truth we science writers are supposed to cringe over, poke fun at, and in general run from like horses out of a burning barn. Yet the dipper brings to mind something told to me years ago by a Northern Cheyenne elder, who dismissed critics of anthropomorphizing out of hand.

“It’s nonsense. We learned how to act, how to survive, from the animals. How can we project onto them what came from them in the first place?”

It’s been more than 40 years since I fell in love with the dipper — or water ouzel, as it’s commonly called in Europe and the Himalayas. The final bell had rung on my senior year of high school, which to me was like a starting pistol fired in a race to flee the corn and rust of the Midwest. I made for the Rockies, as I long said I would, hurling down Interstate 70 in a 1964 Pontiac Tempest I’d named Stickeen, after John Muir’s dog. Arriving bleary eyed at Rocky Mountain National Park, I shouldered a canvas Boy Scout pack, strapped a Coleman sleeping bag the size of a couch pillow onto my back with a piece of seat belt webbing (really), and hit the trail for Fern Lake. That evening, after downing a plug of Spam and a can of Campbell’s Chunky soup cooked over a can of Sterno, I headed off to trip the evening light fantastic along Fern Creek. And it was there, on a flat rock in the middle of that frigid tumble of water, a Sierra cup full of abominable instant coffee in my hand, that I first saw the little bobbing songbird that would buoy my spirits for the next four decades: jumping off rocks to alternately walk and swim on the bottom of the creek, nabbing larvae and fish eggs and then hopping back up on a rock to bob up and down to some music only she could hear, a tune that by my reckoning seemed to be running at about 40 beats a minute. 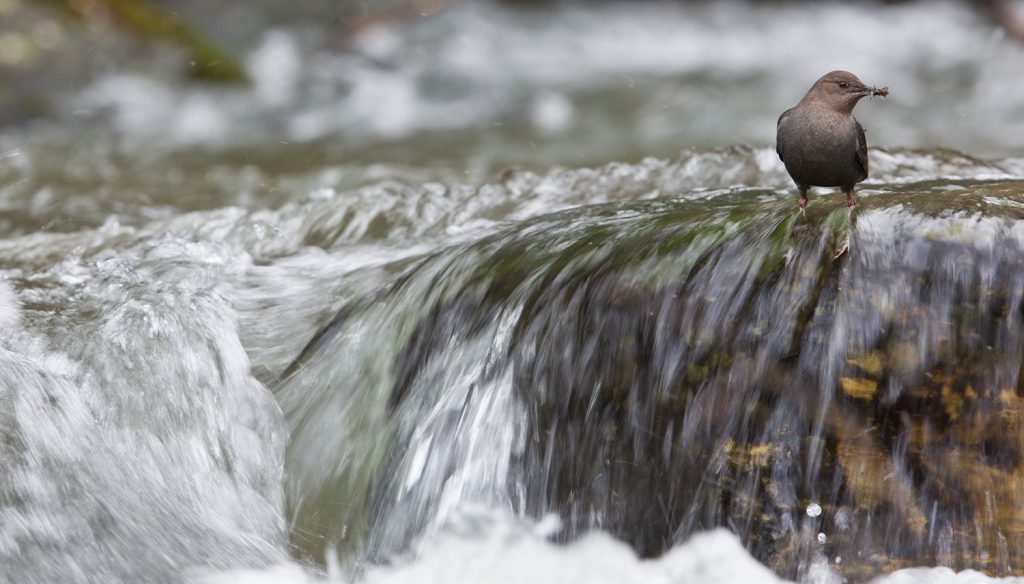 With few exceptions — wolves, wolverines, martens, and fishers come to mind — most animals react to brutally foul weather by crouching into what looks like grumble posture, hunched over with heads hung low, squinting, with butts to the wind. But not only does the dipper keep doing her merry little dance through every fury of winter, sometimes with her face actually tilted into the weather, she actually turns up the volume of her song. The dipper, in a nutshell, doesn’t just endure harsh conditions. She thrives.

Which has everything to do with why she was John Muir’s favorite bird.

“It is pitiful to see wee frost-pinched sparrows on cold mornings in the mountain groves shaking the snow from their feathers,” Muir wrote, “and hopping about as if anxious to be cheery, then hastening back to their hidings out of the wind, puffing out their breast-feathers over their toes, and subsiding among the leaves, cold and breakfastless, while the snow continues to fall.” The dipper, he pointed out, never called for a shred of pity: “not because he is strong to endure, but rather because he seems to live a charmed life beyond the reach of every influence that makes endurance necessary.” Not only did dippers sing in the middle of a storm, noted Muir, they sang more loudly than ever, and with a more astonishing variation of notes.

“He must sing, though the heavens fall.”

When you start considering this bird, it can seem like a creature straight out of Marvel Comics. Not only do they use their wings to “fly” down to stream bottoms, the pressure of the water guiding their movements (and they can dive down some 20 feet), but once there, they may walk on the bottom for a good half a minute, patiently turning over rocks looking for food. Special nasal flaps pinch shut to prevent water inhalation. Meanwhile strong focusing muscles in their eyes actually change the curvature of the lens, greatly strengthening their underwater vision. Helping them survive the icy chill of mountain streams are extra layers of feathers, which they keep waterproofed with a preening gland some 10 times bigger than those of other songbirds. Also helping in the cold is the fact that their heart rate drops immediately upon diving, slowing still further the longer they’re submerged, then rebounding again when finally they hop out of the stream. And finally, a dipper’s blood has high levels of hemoglobin, allowing it to carry significantly more oxygen than other birds can. The reward for all this remarkable adaptation is the feast of goodies hidden on stream bottoms — caddis fly larvae and nymphs, stonefly nymphs, and fish eggs, as well as the larvae of mosquitoes and midges.

Dippers are members of a group of birds nearly six thousand species strong (which means more than half the birds on earth) known as passerines — a name considerably more charming than the more common moniker of “perching birds.” Passerines have been around for at least 55 million years, arriving well over 50 million years before humans, originating in the Southern Hemisphere on a gargantuan land mass called Gondwana, long before the continents began to drift. The first great burst of passerines is thought to have happened in Australia, New Zealand, and New Guinea, followed by even bigger explosions of new species in Europe and Asia. Worldwide, the genetic family that holds the dipper — which, by the way, is the only aquatic passerine — has just five members; the American dipper is the sole representative in North America, thriving in fast-moving waterways from Alaska to the mountains of Panama. 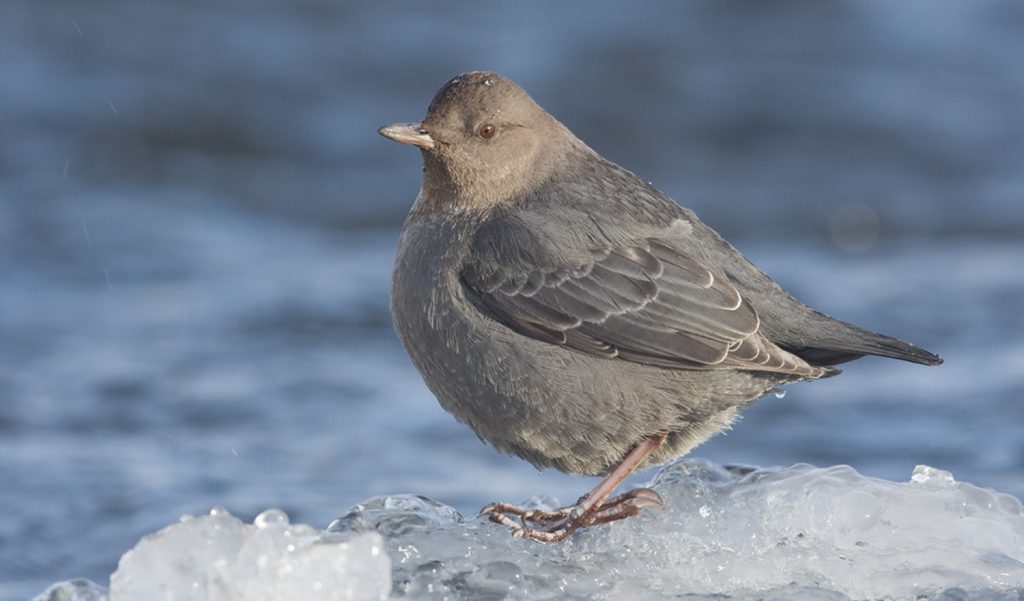 Dippers breed as early as February, often year after year with the same mate; their breeding for me is still another kind of joyful shout in the drone of the winter doldrums. The courtship phase often kicks off with an intriguing little ritual where the male approaches his potential mate and feeds her. If dipper love takes, the two set out to create a striking nest as big as a basketball, woven out of bark and water plants and covered with moss, so well camouflaged when placed on stream banks that you can be looking right at it and never see it, like something from The Hobbit. Often nests are located just above stream level — sometimes even behind waterfalls — which means that when the little birds are ready to fledge, it’s an easy hop out the small round door into the watery world where they’ll be dancing for the rest of their lives. Dippers travel very little. Indeed if they go at all, it’s mostly short distances upstream or downstream, either to establish new territory or to find open water in winter.

What if that Northern Cheyenne elder is right? What if the inspiration filling my head and heart on sighting the dipper is due less to some spike of my imagination than to a kind of simple recognition? If the dipper just can’t help herself, which she probably can’t — if she has no other choice than to carry on with what seems an indefatigable spirit — then maybe something like that exists in us, as well. Perhaps what we need isn’t motivation but surrender — putting down the illusion that it’s ever of any use to not be fully in our lives.

In one early winter more than a decade ago, enfolded in the most profound grief of my life, it was the dipper who offered me morsels of hope. Split from her mate for the winter, not to rejoin him until mating season began in late February, morning after morning I found her standing alone in Rock Creek on a loaf of granite, bobbing and preening and then hopping into frigid water with wings outstretched to “fly” and dance in her persistent quest for food. Then back up to the rocks again, bobbing up and down as if measuring the very life pulsing through her body — the way we humans might absently snap our fingers or tap our toes to some beguiling strain of music. It seemed like a bridge to that thing John Muir had said — about the dipper being compelled to sing “though the heavens fall.” My heavens had fallen. And while it would be a long time before I felt any urge to sing or dance, it was nevertheless heartening to be with a creature who knew no other way.

Despite her awesome Marvel Comic traits, the dipper, wrote William Matchett in his poem “Water Ouzel,” seemed unlikely to ever become a popular hero. She’d been denied bodily beauty, he said — and what’s more, was slightly absurd and eccentric:

No prize committee selects the clown
whose only dangers are daily and domestic.

Yet he persists, and does not consider it persisting.

The dipper carries on in every month of winter — Muir described it as “beyond the reach of every influence that makes endurance necessary.” Building nests and raising young and plucking food from the icy waters for five years, or six, or even eight, singing and singing and singing in that wren-like burble, then ultimately, perhaps on some chilled autumn morning, breathing out one last time before being carried away on the current of the stream that had long sustained her. If not a flashy life, it’s one still exquisite, cheerful, noble. The dipper is an invitation to put down our habits of grim determination and fortitude for a while and go spend the day doing the equivalent of dancing on a rock — returning for a little while to some more precious state, when our lives were filled with bright, wild strains of nonchalance.