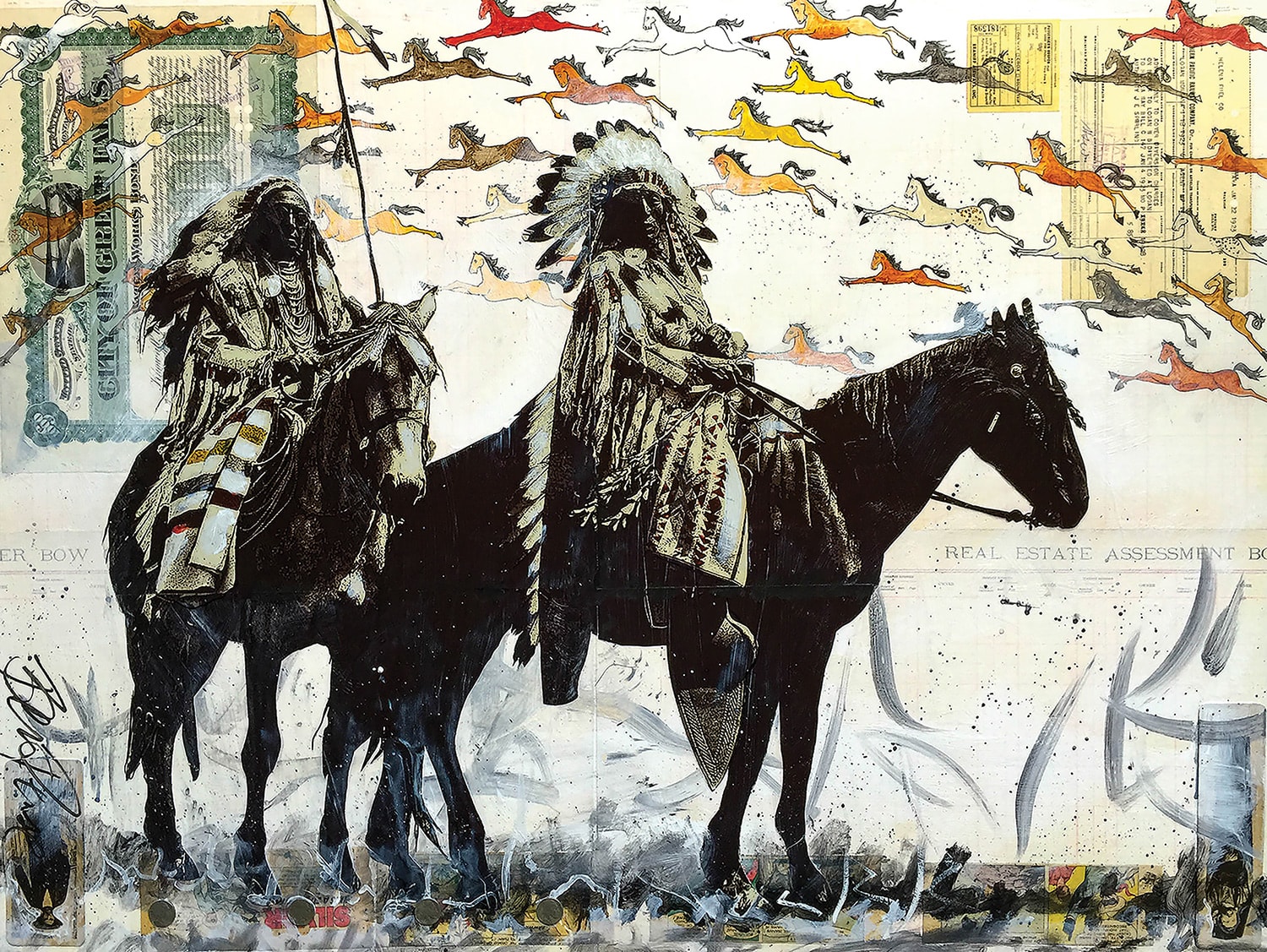 12 Aug Showing Us Where We’ve Been

Western Art Week in Great Falls has become something of an artistic haven for Montanans. Each March, the town of 58,000 is converted into a miniature Santa Fe, New Mexico, with hotel rooms serving as open studios, prominent Western artists exhibiting work at the town’s two museums, and an art auction that grossed more than $6 million in 2017. For artist Ben Pease, who first attended with his mother at age 10 by traveling four hours north from Crow Agency, Western Art Week was a revelation.

“I had no idea that a world like that even existed. To see the quick draw and the auctions and all the rooms; that exposure was literally a whole other world to a kid from the reservation,” Pease says, noting that the leather and jewelry — adornments that were reserved for the wealthiest of the wealthy on the reservation — stood out in their multitude. “And then I saw artists painting Native stuff and said, ‘Hey, I have a representation here. I can see myself here. I can relate to this.’ I felt good about seeing this, because I had never been recognized in my life before that.” 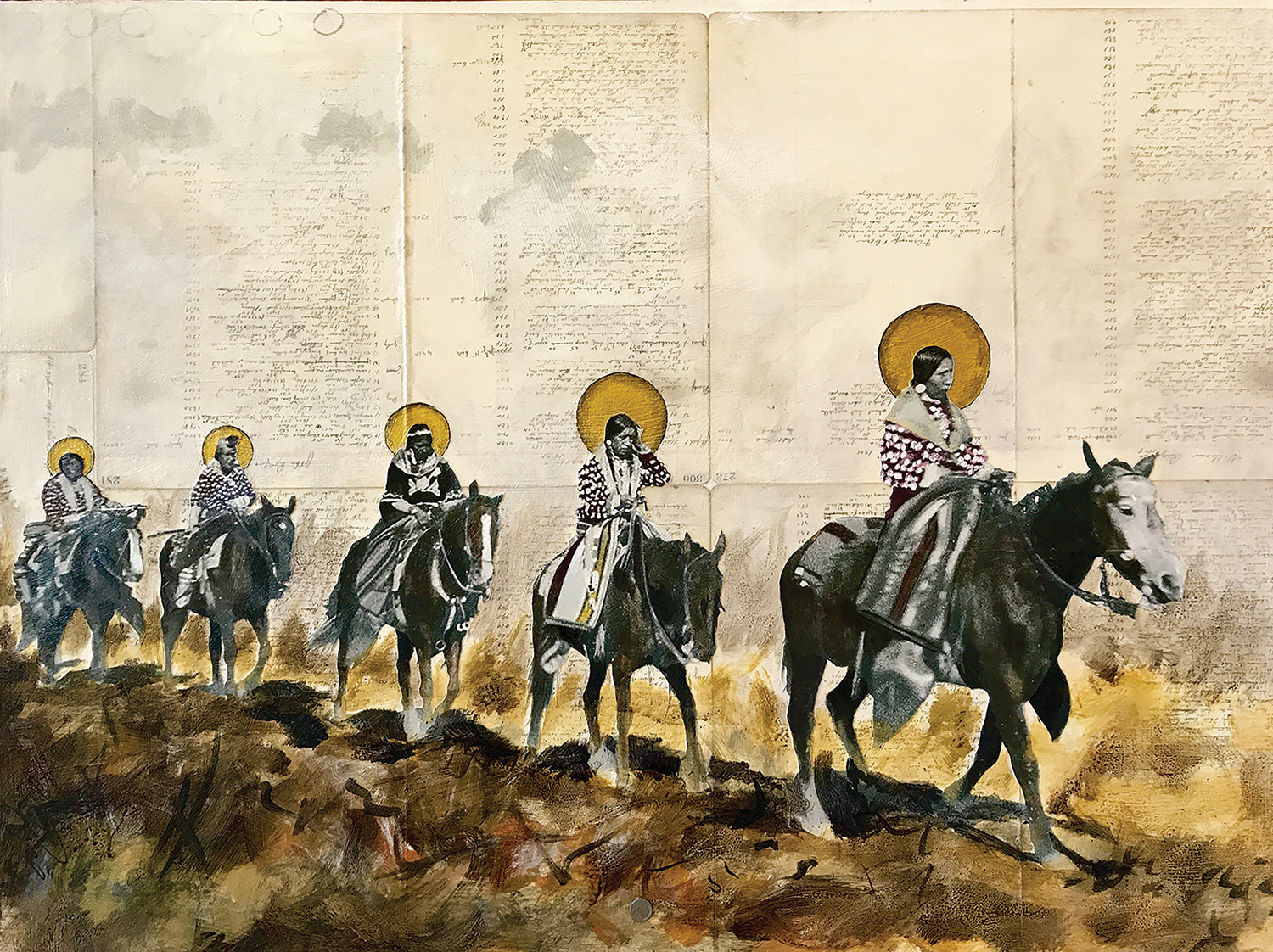 That was a motivating moment for the artist from the Crow and Northern Cheyenne nations, who saw new possibilities in the art world. Seventeen years later, Pease returned to Western Art Week and won the People’s Choice Award in the Saturday Quick Finish event at the 2016 Out West Art Show.

As a contemporary storyteller, Pease communicates his ideas about the “aboriginal struggles and aesthetics” though his mixed-media artworks. He wants to be a “counterpoint to some of the cultural appropriation that happens in art,” and he wants to be an artist who creates change, not “pretty pictures.”

Drawing on Native traditions — such as ledger drawing, and sharing cultural knowledge and tribal history through storytelling — the-28-year-old artist also incorporates technology and pop culture in his work. The finished pieces include historical elements, such as photographs, vintage documents, buffalo nickels, and receipts, as well as imagery and processes from today: Yoda, Donald Trump, graffiti, Photoshop, and archival prints. 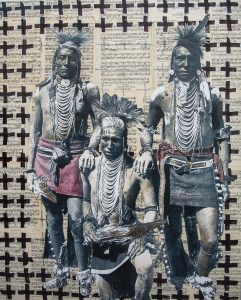 “[My work is] an extension of cultural understanding in contemporary times,” Pease says. “Antique ledger paper references the first point of contact and a literal contrast of cultures, and the new work over the top tells a different story.”

For example, Old Time War Dancers depicts three traditional Crow dancers and incorporates sheet music from 1896. Or the Beatles cross Abbey Road with long hair and headdresses, offering wisdom through another painting’s title, Words are Your Weapons. Pease highlights stereotypes of the “red man” by juxtaposing imagery from a Disney movie of Peter Pan smoking the peace pipe, with photographs of his great- great-grandfather (a Crow scout with the 7th Cavalry of the U.S. Army), and of Chief Medicine Crow, a warrior and delegate of the Apsaalooke people, in Ya’ll Can’t Kill my Vibe.

“It’s all an extension of myself, of who I am,” Pease says. “These are important stories to tell now. Most importantly is recognizing that to properly move forward, you have to know where you’ve been.”

Pease’s narrative work is also layered with symbolism. A Keeper of Legacy, for example, features a Crow dignitary named Wolf, a famous warrior and advocate for his people during the transitional period of assimilation. The crosses in the background of the painting represent “cultural anchor points,” Pease says. They also represent the casualties on both sides, the four cardinal directions that are recognized in all cultures, and the imposing beliefs of Christianity. 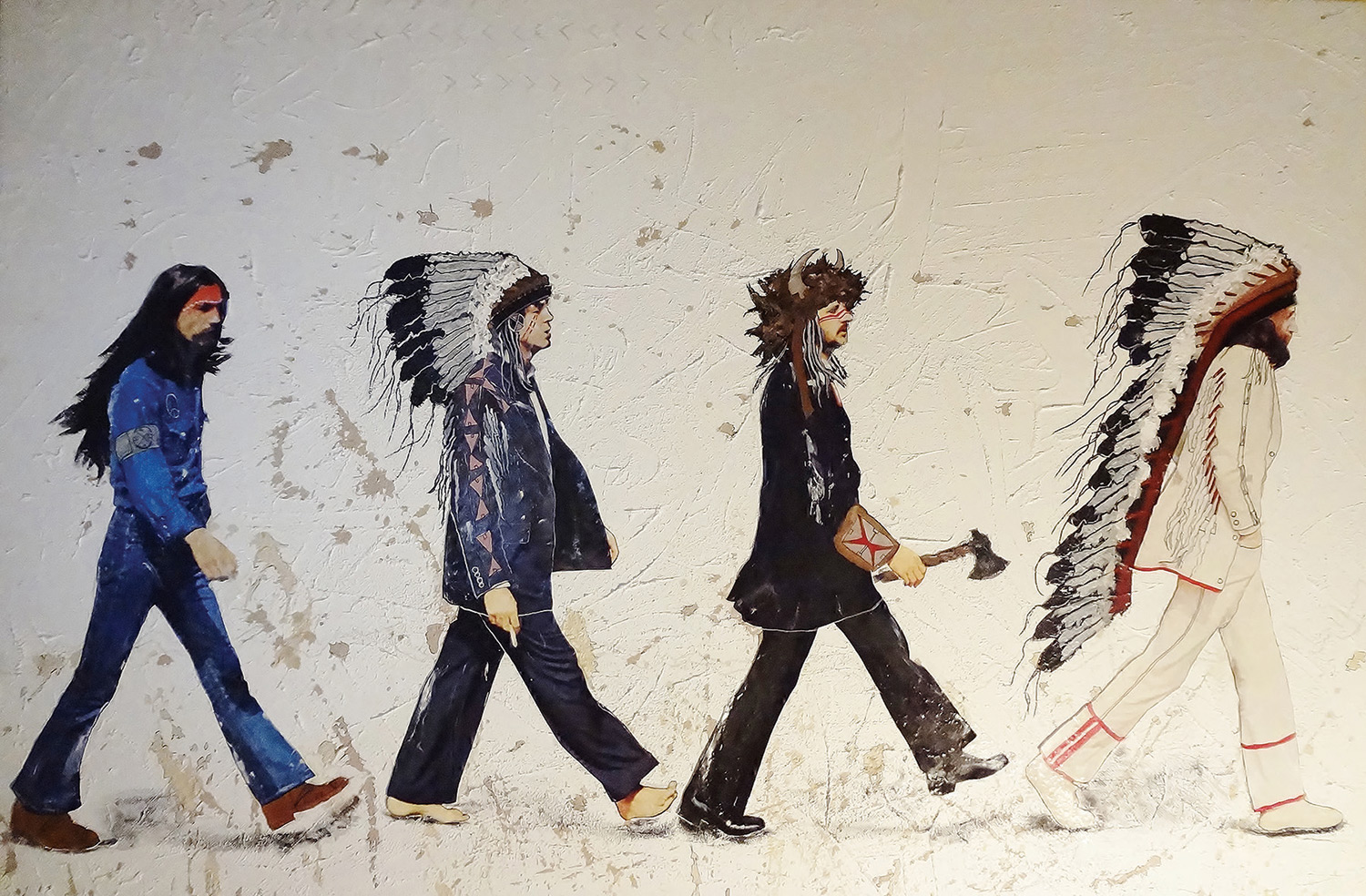 “Each work makes a statement, something to stand upon,” Pease says. “Specificity is very important; specificity in person, place — something that teaches the audience an idea or concept.”

His ideas for paintings are inspired by an active study of the world around him. He is impassioned about education, stressing the importance of reading, research, speaking with elders, and sharing knowledge with younger generations. “I need to properly educate myself before properly educating other people,” Pease says. “Crows always talk about how you educate yourself, and that learning brings you to a point of personal success. Culturally, it’s then required that you share that knowledge with the community.”

Pease was born in 1989 and raised on the Crow Reservation in Southeastern Montana. “More than knowing that I wanted to be an artist, it was knowing I was an artist,” Pease says, adding that he follows a lineage of creative people and art educators, including his great-grandfather, Ben Pease Senior, who recreated historic Crow cultural items. Formerly criticized as “artifakes,” these objects now reside in the Buffalo Bill Museum in Cody, Wyoming, and in collections throughout the world.

“I saw these things that he made and others in my family made, and I suppose it naturally absorbed into my identity — how I define myself,” Pease says.

An art and football scholarship led him to college in North Dakota, where artist Walter Peel became a mentor. Pease also studied at Montana State University, and he recently completed an artist’s residency in Dubai, selected as one of five to represent North American Native artists. He is also a founding member of the Creative Indigenous Collective, which promotes emerging Native artists as they build their careers, and highlights social issues on reservations.

Pease will be part of a group show, Color is the Medicine, opening July 27 at the Stapleton Gallery in Billings, Montana. Ongoing through the end of August, the show was conceived as a response to a question from gallery owner Jeremiah Young: “What is one thing you’ve had an ambition to do but didn’t because you lacked the resources?”

Pease designed a to-scale installation inspired by the Medicine Wheel and  the Bighorn Mountains. “[It’s] an exploration of the colors he saw there,” explains Young, who opened the gallery more than a year ago with the knowledge that Pease would be a central artist. 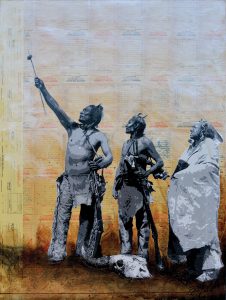 “This young man, he has the whole kit of parts: He is incredibly talented, he’s scholarly…he has a physical presence, he’s charming, he has ambition, he has something to say. He has a whole kit of what he needs to be a great artist,” Young says. “No matter what, Ben is going to be creative. He’s not going to stop. He doesn’t have a choice, it is just pouring out of him. He’s only 28 years old. If you think about the arc of what he is capable of doing, and the quality of art between ages 28 and 74, the student will become the master.”