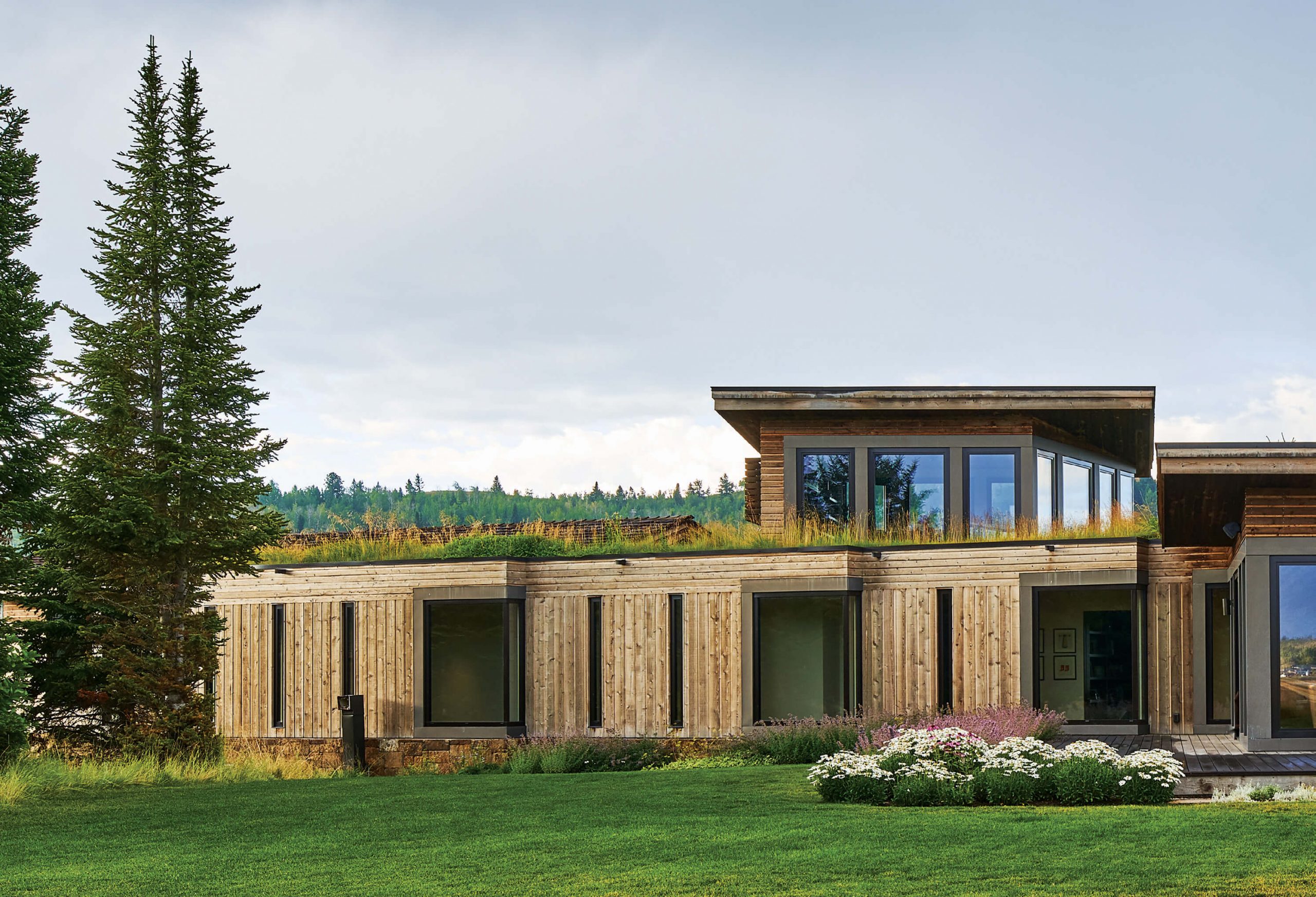 Both streamlined in its contours and rustic in its materials and finishes, this house in Jackson Hole, Wyoming’s Skyline Ranch settles seamlessly into the surrounding landscape and takes full advantage of the views.

Twentieth-century architectural icon Frank Lloyd Wright described his ideal home location as “the shining brow” of a hill. Indeed, he named his Wisconsin and Arizona homes (and adjoining studios and schools) “Taliesin,” the Welsh word for such a setting, having found in each of those places a combination of gentle rises and sweeping views that enabled him to design and build structures that were “of the hill,” rather than perched atop. 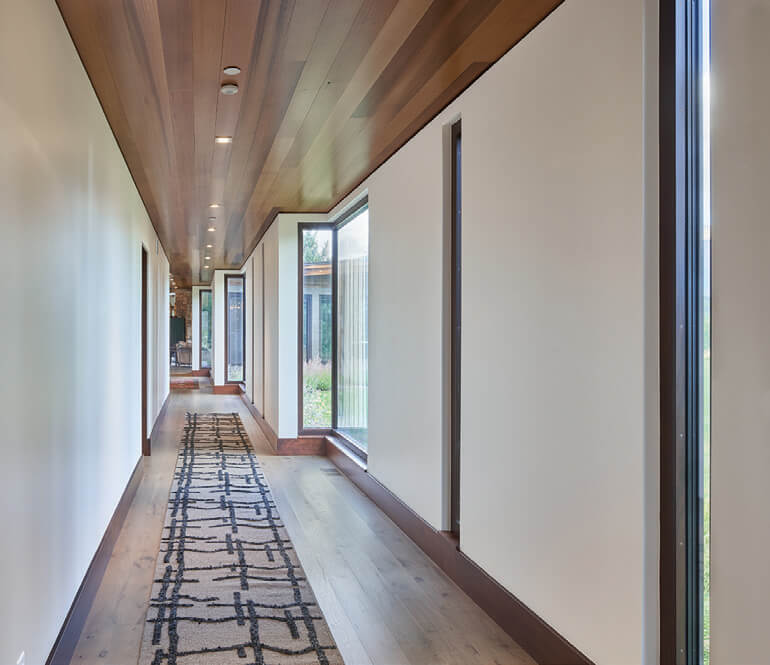 A custom runner from Kismet Fine Rugs, based in Jackson Hole, flows the length of a main-level hallway that leads to the family bedrooms.

In a similar spirit, architect Tom Ward — co-founder of Ward | Blake Architects — created an 8,641-square-foot residence in Skyline Ranch, the oldest subdivision in Jackson Hole, Wyoming, for a couple with two children. 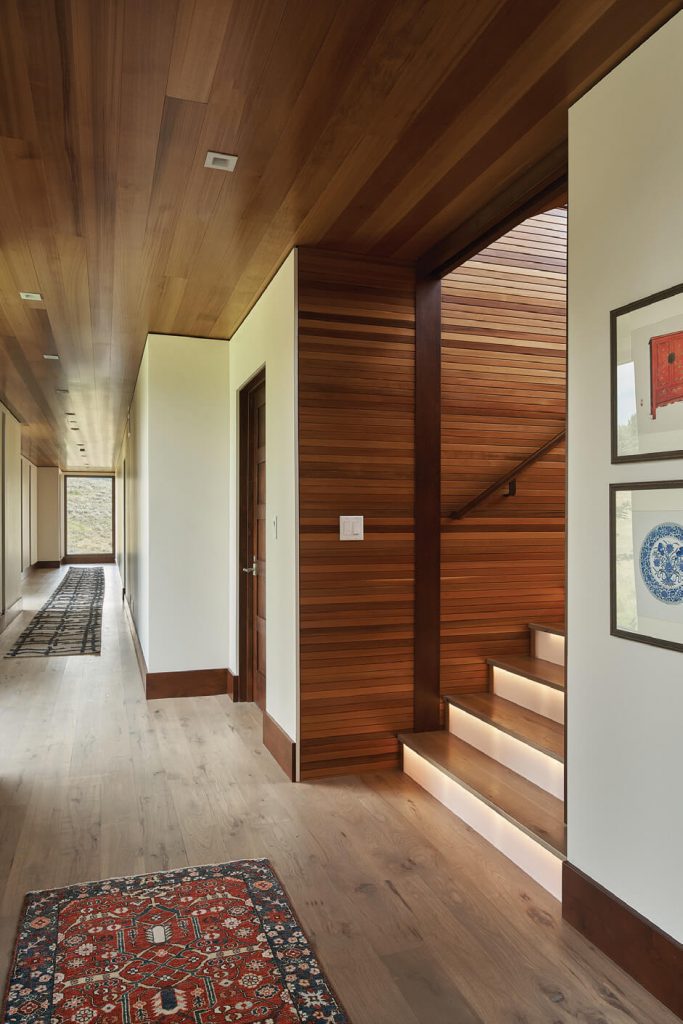 Off the entry foyer, stairs lead to the husband’s office, which features 360-degree views. On the wall to the right are contemporary watercolors of traditional Chinese garments and furnishings, purchased by the homeowners in Singapore.

Both successful in the business world, the clients had previously lived and worked in New York. “But shortly after our twins, a boy and a girl, were born in 2003,” the wife says, “we moved to Wyoming to raise them there.” Within the subdivision, they found a home that was built in 1971, sited on a gentle knoll with 360-degree views that encompassed the Grand Tetons to the north and a protected migration corridor to the south, through which thousands of elk pass between mid-autumn and Christmas each year. “It’s like living on safari, and with those views, it almost feels like you’re on hundreds of acres,” she adds. The family lived in the original house for 10 years, which the wife describes as “a mountain lodge with contemporary lines, shagadelic wool carpets, and linoleum-tiled bathrooms.” 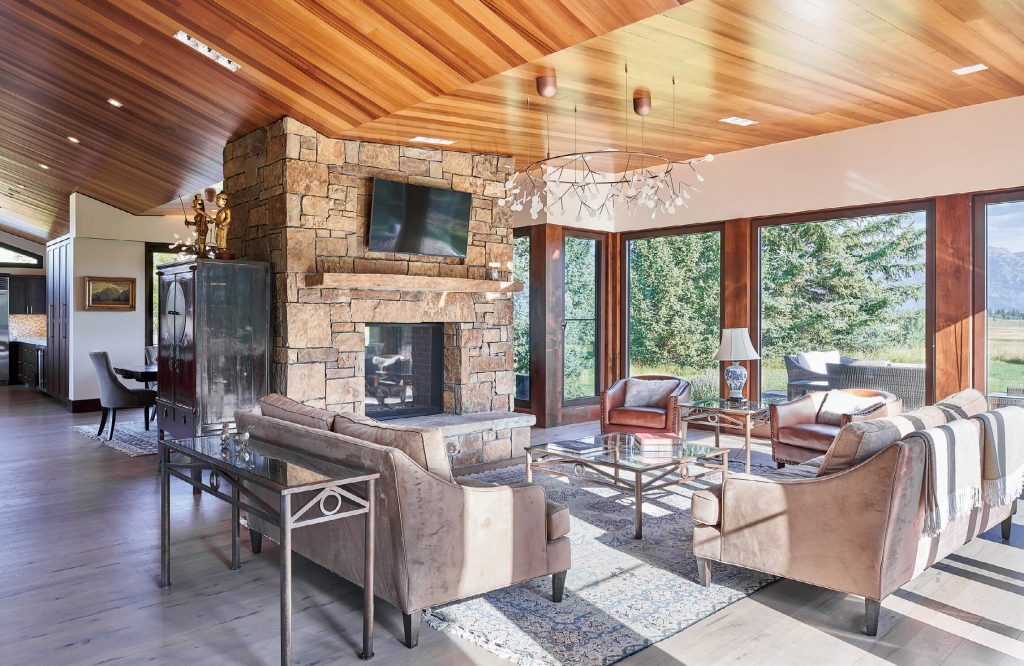 With comfortable and durable seating, the living room is arranged for gatherings around the fireplace.

In mid-2014, the couple embarked on the creation of a new home, well informed by their time spent on that shining brow. While searching for an architect, they discovered Ward, who had built “an exceptional house for a friend,” and whose highly versatile portfolio demonstrated an ability to combine both the clean, contemporary lines the husband desired and the wife’s preference for “a barn-style farmhouse” with more traditional and rustic sensibilities. “We always aim to create a house that belongs where it’s built, achieving a balance of structure, orientation, and sense of place,” Ward says. 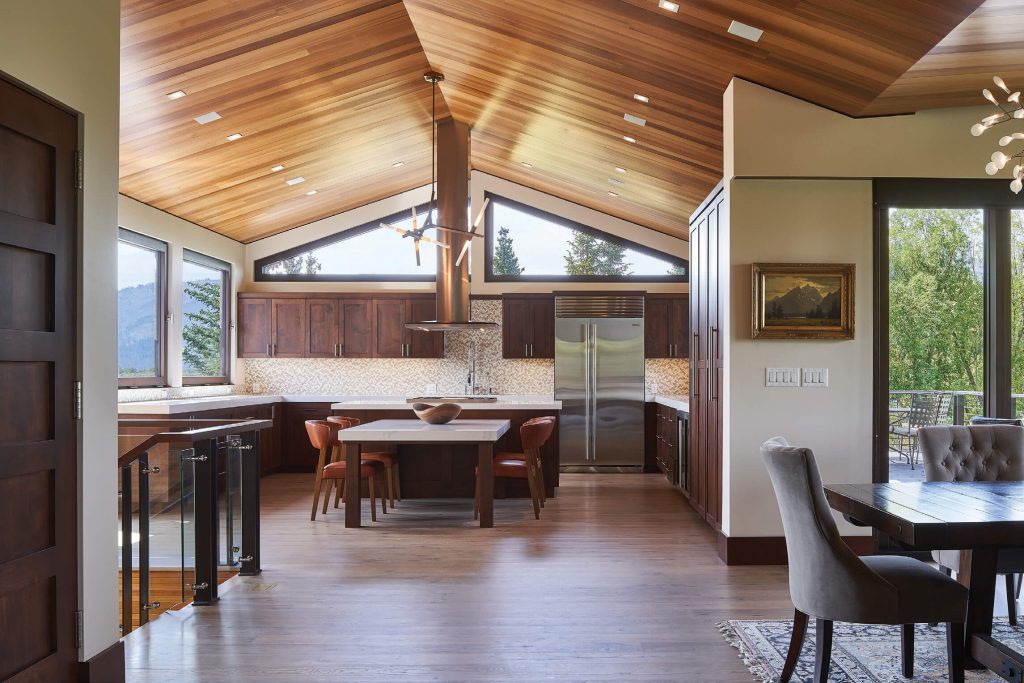 In the kitchen, gabled windows fill the space with natural light and allow for treetop views. The cedar ceilings add
warmth throughout the living areas. Next to the Caesarstone quartz kitchen island, the casual dining table features a heated surface.

Built partly into the hillside and occupying virtually the same footprint as its predecessor, the mostly two-story structure feels surprisingly “warm and cozy” to its owners despite the size of the home. They credit that to the relatively modest scale of the individual rooms, as well as to the layout, in which shared family living spaces — including the kitchen, dining room, and living room — achieve a sense of both intimacy and openness by being slightly angled from but still open to each other. 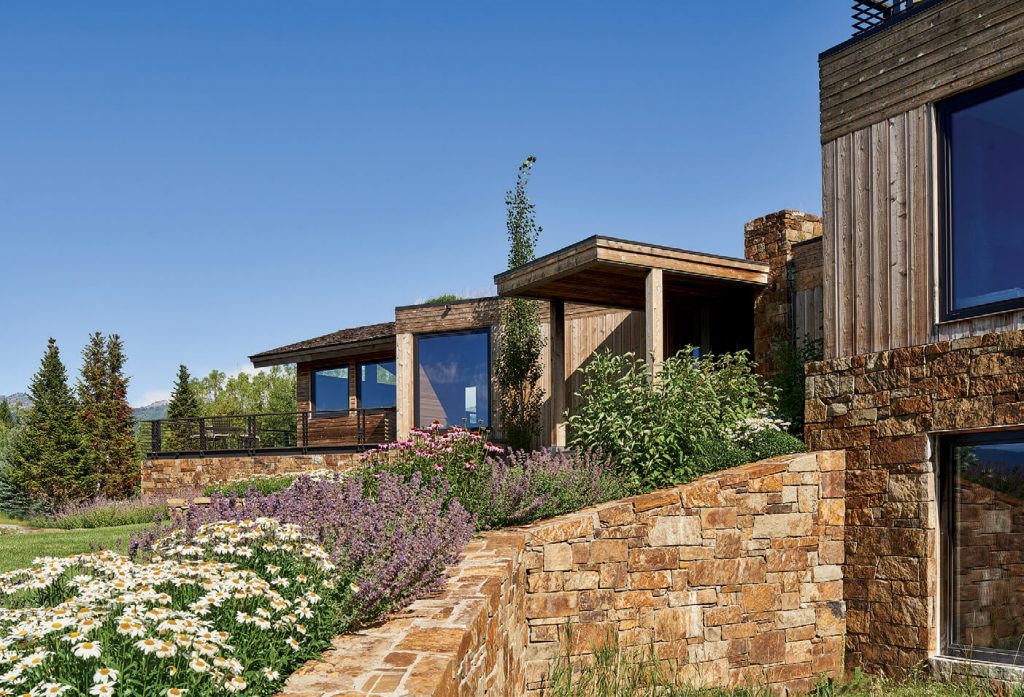 The lower-level rooms look out to the flowerbeds and the home’s main entrance.

Family bedrooms, all facing south, are set on one side of a large hallway beyond the living room and entry foyer. The other side of the hall features large-paned windows that frame the views, narrow ones that offer hints of the landscape, and strategically-placed walls to block occasional glimpses of other houses in the area. On the floor below are two guest bedrooms, a spa-style bath, family room, gym, and sauna — all “facing south for great light and warmth,” says Ward. And a large mudroom connects the home to the garage. 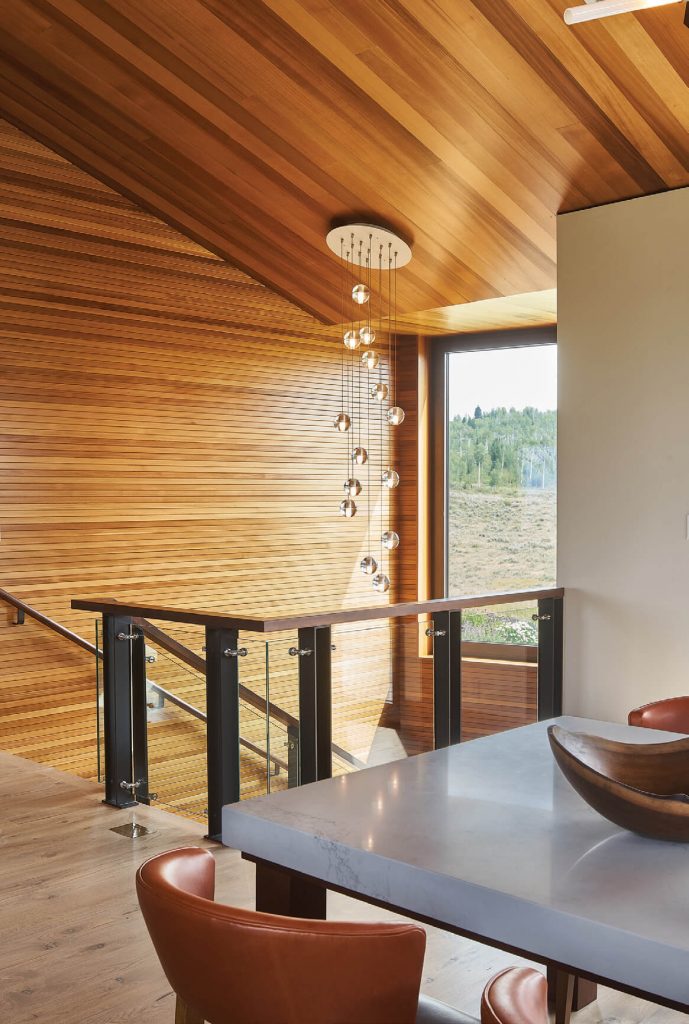 A multi-pendant chandelier from Bocci hangs over the stairs that descend to the family room and gym.

The couple also has individual office spaces, which were designed to be functional and soundproof. “Mine is near the entrance of the house,” the wife says, “so the kids have to walk past it to get in and out, and I can pop in and out of the kitchen and living area.” The husband’s office rises above the main floor in a central tower, featuring 360-degree views and an outdoor deck. 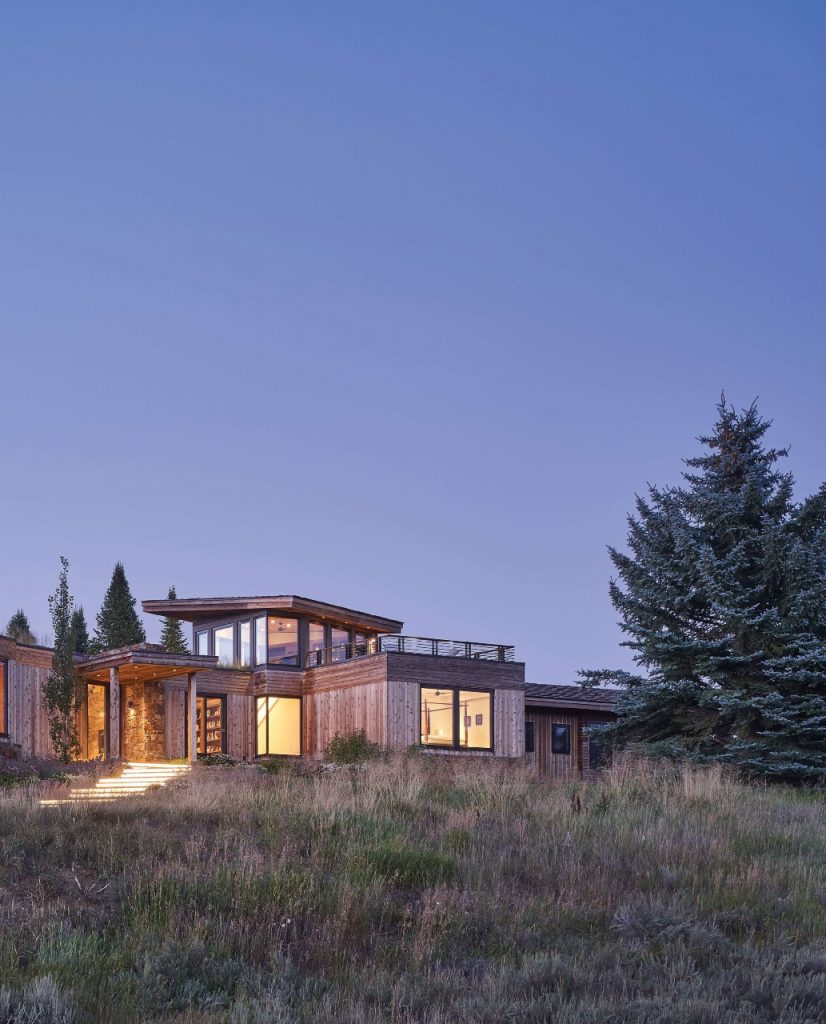 Native grasses cover the sloped landscape, allowing the house to blend into its setting. Come evening, lights glow behind the frosted acrylic risers of the stairs that lead to the front door, warmly welcoming guests.

Built by the Jackson Hole-based Rendezvous Custom Homes, the structure showcases “an absolute attention to detail,” the wife says, in its use of materials that express a rustic yet refined Western vernacular. Farmer’s stone, a type of sandstone, forms the lower-level exteriors — including a climbing wall — and the two-sided fireplace in the living and dining rooms. The upper floor’s exterior features tight-knot cedar with an environmentally friendly, nontoxic finish “that makes it age quicker, so it looks like it’s 100 years old,” says Jeff Jeppesen, co-owner with Paul Wetzel of Rendezvous Custom Homes, who gives the homeowners and the architect credit for helping them achieve exceptional craftsmanship. Clear cedar with a satin finish gives the interior ceilings a polished look while adding warmth. 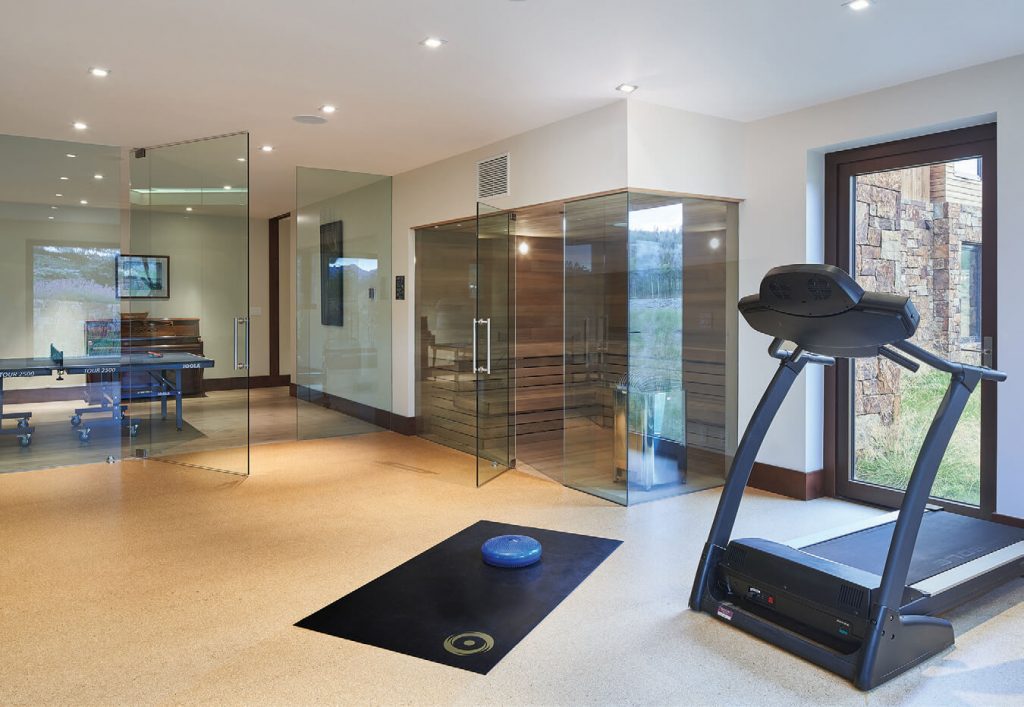 That feeling of warmth extends throughout the shared living spaces, due in good part to the interior design decisions made by the wife. “Throughout the creation of the house,” she says, “I probably spent two to three hours every evening working on the details. I knew exactly what I wanted to make our house feel comfortable.” From contemporary chandeliers that express a connection to nature in an abstract form, and durable and stylish seating from Restoration Hardware, to an assortment of antiques the couple acquired during their time spent in Asia years before, the choices she made achieved the couple’s overall goals for “a contemporary house where every room felt livable and comfortable, with warm and cozy spaces that would never become dated.” 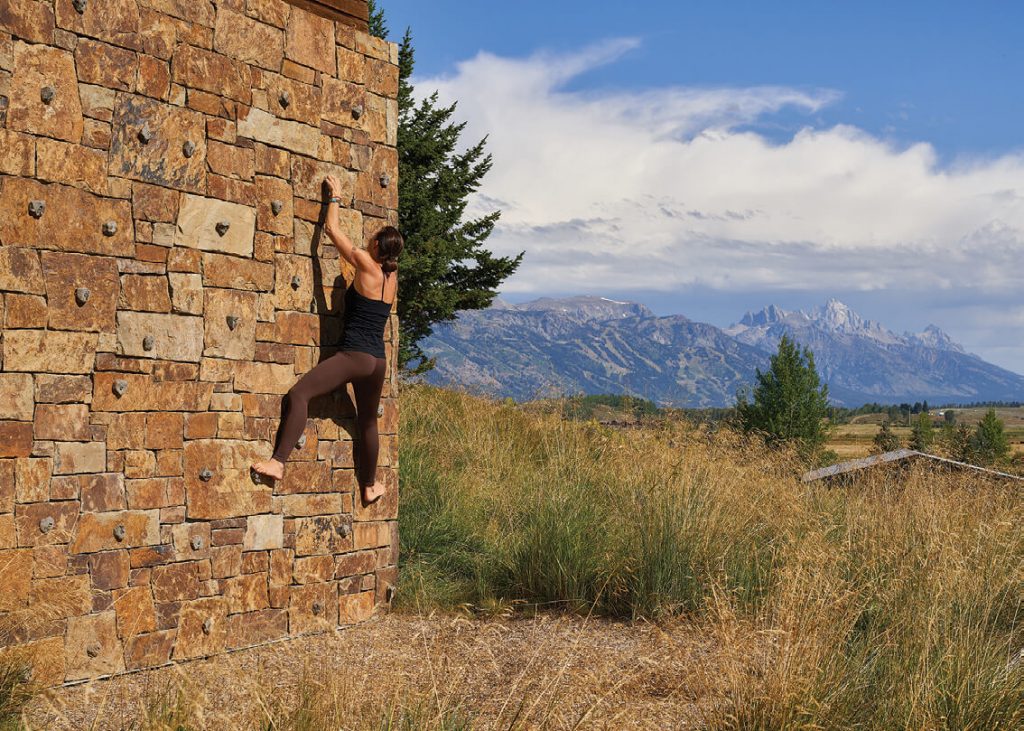 On the eastern exterior of the house, below the bedroom wing, a climbing wall allows the homeowners to work out while enjoying views of the Tetons.